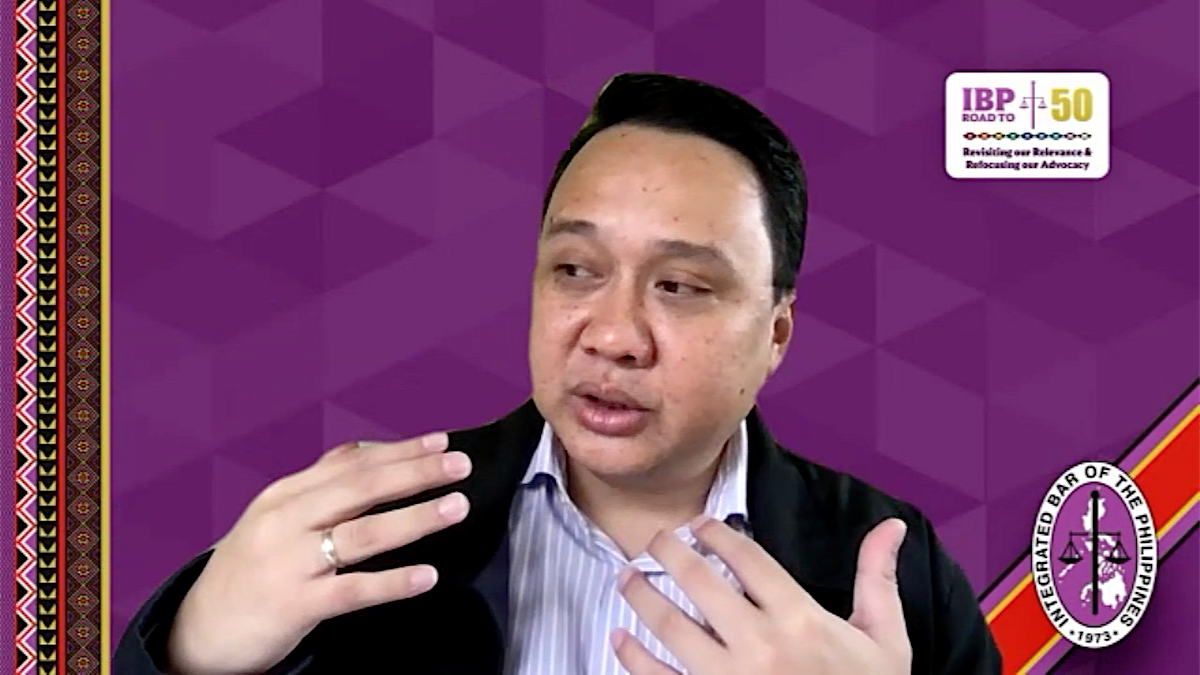 ‘Everyone is openly violating our election laws’: IBP seeks relevance among lawyers, public

IBP President Burt Estrada, who assumed his post in July 2021, speaks to the Philippine Center for Investigative Journalism about digitalizing lawyers’ registration and providing them medical insurance and loans. He breaks down the organization’s stand on national issues and its role in the 2022 elections.

One of the first meetings that lawyer Burt Estrada arranged after he assumed office as president of the Integrated Bar of the Philippines (IBP) in July 2021 was with Commission on Audit (COA) Chairman Michael Aguinaldo. He argued against a COA circular that prohibited local government units (LGUs) from funding IBP chapters around the country on the basis of a constitutional prohibition barring government offices from hiring private lawyers.

In Bukidnon, where he led the local IBP chapter, Estrada relied on support from the provincial government to expand its legal aid program for indigents from just one lawyer for the entire province to one per congressional district. More lawyers volunteered because the funding paid for transportation and other expenses.

“The circular prohibited local government units from hiring private lawyers because [the LGUs] have legal officers and there’s a solicitor general. But this one, we’ve always argued, you are not hiring private lawyers. You are supporting a program that gives legal aid to the indigent litigants,” Estrada told the Philippine Center for Investigative Journalism (PCIJ) in an interview.

The IBP, created through Republic Act No. 6397, is a mandatory bar association for lawyers in the Philippines that is tasked to elevate the standards of the legal profession, improve the administration of justice, and enable lawyers to serve the public more effectively. It has chapters nationwide that issues IDs and receives disbarment complaints against its members.

Estrada said the organization wanted to revisit its relevance to its own members and to the general public ahead of its 50th year.

He spoke to PCIJ about IBP’s big plans. For instance, he’s working with the IBP board to address lawyers’ welfare amid the challenges brought on by the pandemic and new rules issued by the Supreme Court intended to improve the judiciary’s efficiency.

Estrada also discussed the IBP’s stand on pressing national issues, including the killing of lawyers, and partnerships to make the organization relevant during the 2022 elections.

The pandemic hastened the judiciary’s digitalization, one of the key reform initiatives of Chief Justice Alexander Gesmundo.

Estrada said the IBP was taking steps to support the chief justice but it also needed to help  its members — especially the senior lawyers — who have been used to doing things manually and have been reluctant to embrace technology.

“[Gesmundo] mentioned [the need] to bridge the gap in this new normal — technology-wise. [It was] one of his marching orders, after we took our oath [as IBP officers]. He said, ‘I hope that in all IBP offices there will be a space where people, especially the indigent litigants, can have access to justice through remote technology.’”

Based on the chief justice’s orders, he said the IBP Board approved an allocation to provide its local chapters a laptop each and additional monthly allocation for internet connectivity. It took a while, but IBP members can also now renew their registrations and make payments through the MyIBP online app.

Estrada said the courts also needed to upgrade because many remained ill-equipped to follow the new rules of court. “Saan gagamitin ang mga rules, kung hindi naman magkakaroon ng mga hearings (What are the rules for id there are no hearings)?”

“How can you file electronically kung hindi naman capable ‘yung [courts] (if the courts are not capable)?”

On top of these, the IBP is also working on providing members a healthcare program and emergency loan program, Estrada said. He said the pandemic was difficult for many lawyers because they were also under the “no work, no pay” setup.

The IBP also wants to expand lawyers’s assistance to their communities. The organization seeks to replicate a program in Bukidnon where Estrada, as chieftain of the Tagoloanon tribe, helped his own community turn itself into a juridical entity with access to capital.

This was the promise of the Indigenous People’s Rights Act (IPRA) of 1997 but Estrada said his tribe’s experience showed that IP communities could not access capital on their own. Lawyers can help IP communities in this respect.

“We are going towards assisting, giving free legal aid to marginalized communities. It’s called non-traditional or developmental legal aid, where your legal service is not just in litigation. Right now we have one program for the IPs. It can be used also for other sectors where we are there for capacity building,” he said. 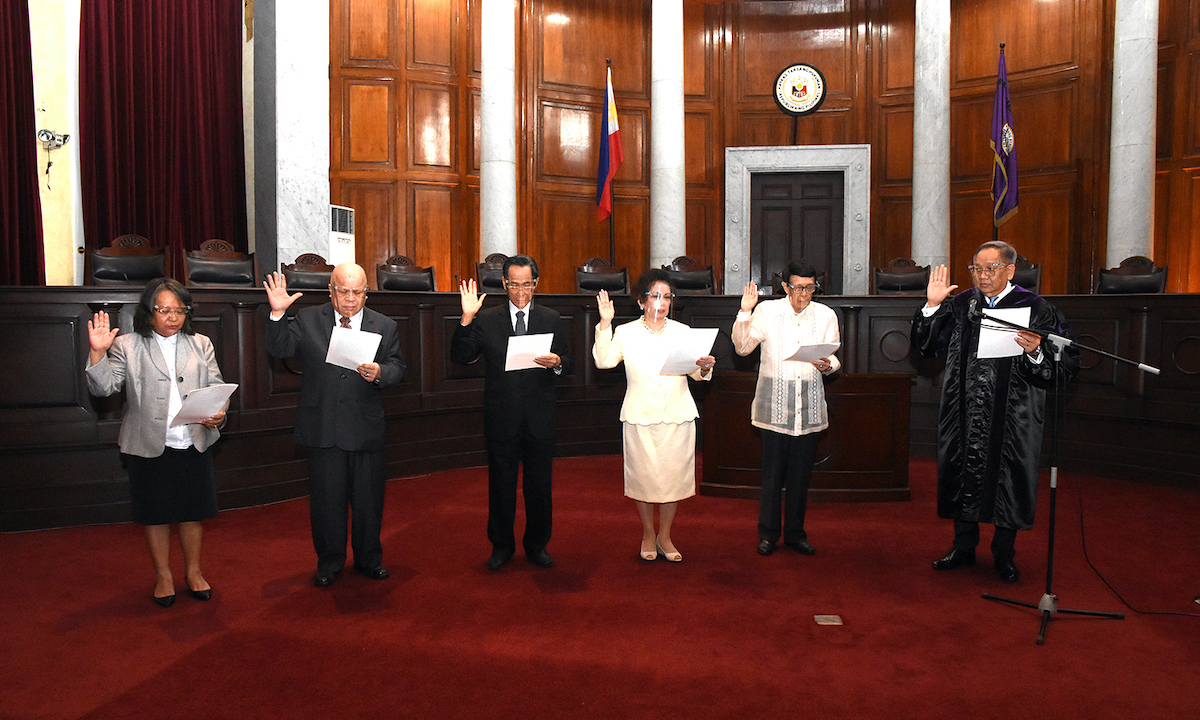 WILL THE JIB ROOT OUT CORRUPTION IN PH COURTS?

The spate of killings of lawyers is a huge concern, which Estrada blames on “the culture of death and impunity that’s been hounding our country.”

He said the IBP initiated dialogues with the security sector to form a panel, which he hoped could conduct parallel investigations into the killings.

Estrada was hopeful the panel would be a deterrent. “We believe in the saying that it is the certainty of prosecution and conviction that is the best deterrent.”

Estrada said the IBP is reviewing the possibility of filing before the Supreme Court another petition for a writ of kalikasan to protect and preserve the country’s sovereignty over maritime features in the West Philippine Sea.

The High Court issued a writ of kalikasan in 2019, based on the request of IBP. The organization filed a petition on behalf of fisherfolk groups, but it was eventually forced to drop the petition because some of the fishermen who signed the petition withdrew their claims.

Estrada said the IBP was examining where its petition might have been deficient.

“We see the need to continue to be active on this part of the defense of our laws and our territories. This is a very important public interest for the Filipino people so we are studying, reviewing where we can be again effective in this,” he said.

The IBP has not taken an official stand on Duterte’s war on drugs and the probe launched by the International Criminal Court (ICC), but Estrada didn't hesitate to issue his personal opinion.

Similar to the killings of lawyers, Estrada said impunity was a big problem in the country.

Estrada said an investigation needed to be conducted [to find out] whether or not there were crimes committed. “Were they justified — the killings? — or were they really crimes against humanity?,” he said.

Ideally, the investigation should be conducted internally, Estrada said.

“I would have preferred it if it can be proven that these cases are being prosecuted here in our country [using our own laws].… We want Filipino people to have that trust and confidence in our own legal and judicial system,” he said.

“It is disheartening na kailangan pa pala natin to go to the [ICC] because that already shows na wala palang ano dito na nangyayari,” he added.

For the 2022 elections, the IBP relaunched its partnership with the Legal Network for Truthful Elections (Lente).

IBP has worked with the election watchdog on promoting voters’ registration. During the campaign period, Estrada said he would like the IBP local chapters to monitor violations of the country’s election law.

“Parang for the longest time, isa sa pinaka parang walang ngipin na batas itong election laws, especially itong Fair Election Code. Everybody is openly doing mga violations of these laws. We are saying we are upholding the rule of law, but it’s openly being violated by no less than people who want to be the leaders of our land,” he said.

He said IBP members could help fight vote-buying during the campign. “I am hoping we would have more volunteers in this respect — lawyers and even law students. If they see a violation, they can document it and then we can submit it to the Comelec.”

Lawyers who are involved in candidates’ campaigns should lead by example, too, he said.

“Of course, we will again call upon our members to maintain our professionalism and to observe always our ethical standards,” he said.

IBP and Lente signed on Dec. 1 a memorandum of agreement to cooperate during the election campaign. END

— PCIJ
Posted in: judiciary
In This Series
Latest Stories

AMID the relentless reticence of the justices of the Supreme Court to publicly disclose their statement of assets, liabilities and net worth (SALN), the PCIJ launched a research into what could be their business interests and financial holdings by mining public records.