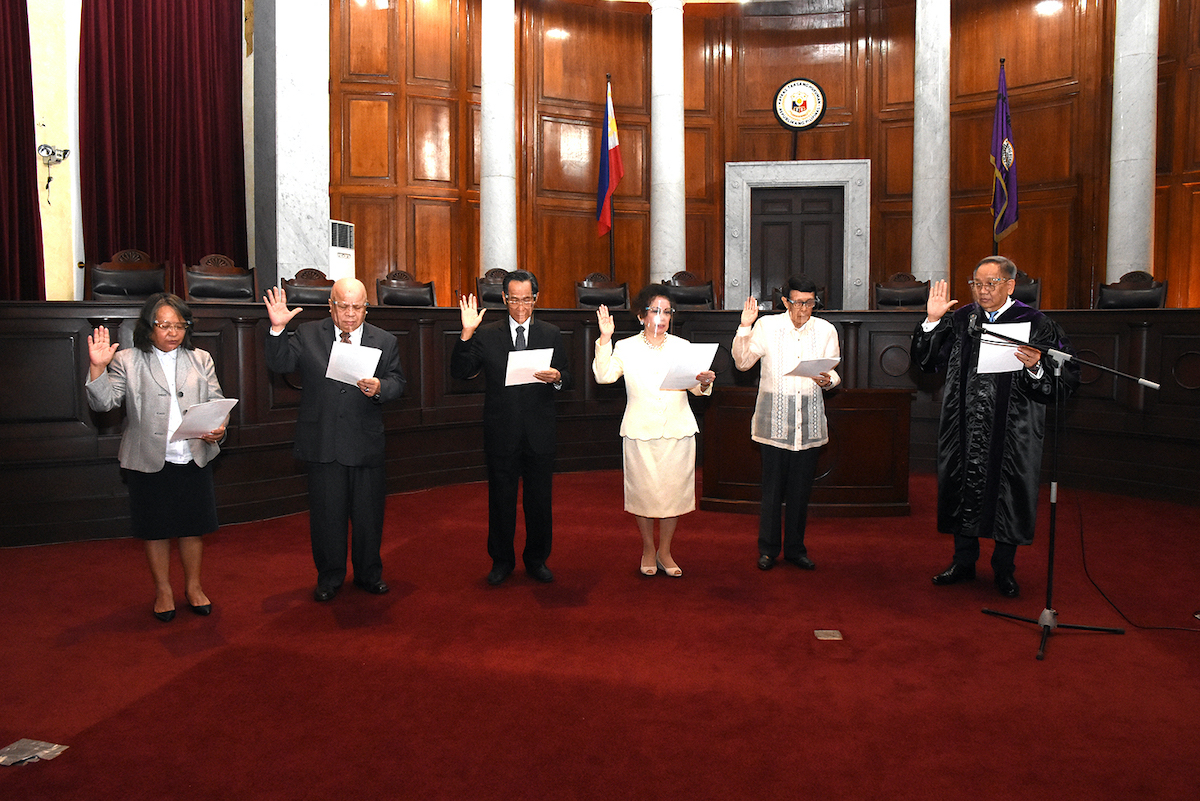 President Rodrigo Duterte has seemingly ended his revolving-door policy on appointments to the highest post in the judiciary with the selection of Chief Justice Alexander Gesmundo, who is expected to serve five years at the helm of the Supreme Court.

The longer the chief justice stays in the court, the better, said lawyer Antonio La Viña, former dean of the Ateneo School of Government.

“Our judiciary has no stability. So five years is a good [tenure],” he told the Philippine Center for Investigative Journalism (PCIJ) in an interview.

This should be enough time for Gesmundo to implement reforms in the judiciary, starting with the most pressing item on the agenda: the institution of the Judicial Integrity Board or JIB, a panel composed of retired justices who will investigate cases of corruption in the courts.

“Corruption is a long issue in the court,” Gesmundo said during the virtual Judicial and Bar Council (JBC) interviews for chief justice applicants last March 11.

The new chief justice committed to making the JIB operational during his public interview. “The powers and the responsibilities of the JIB are precisely to address the corruption issue in the judiciary,” he said.

The power of the JIB

The Judicial Integrity Board was conceptualized during the time of Chief Justice Maria Lourdes Sereno. But her tenure was cut short when she was kicked out by her colleagues via an unprecedented quo warranto ruling that invalidated her appointment.

Sereno’s successor, Teresita Leonardo-de Castro, served only 46 days but she and the rest of the court signed the Administrative Order (AO) 18-01-05-SC establishing the JIB on Oct. 2, 2018. There was no follow-through under the succeeding chief justice, Lucas Bersamin.

Chief Justice Diosdado Peralta issued the Memorandum Order No. 75-2019 forming a committee to review the functions of the JIB and assess if there were overlaps with the Office of the Court Administrator (OCA), which is responsible for disciplining lower court justices, judges, and court personnel.

Gesmundo explained to the JBC that all complaints, even those made anonymously, would be accepted by the board.

The JIB will have two offices: the Corruption Prevention and Investigation Office (CPIO) and the Office of the General Counsel, Gesmundo said.

The JIB may get help from the court’s Research and Investigation Division and launch a probe without the need for any complaint against members of the judiciary and court personnel. 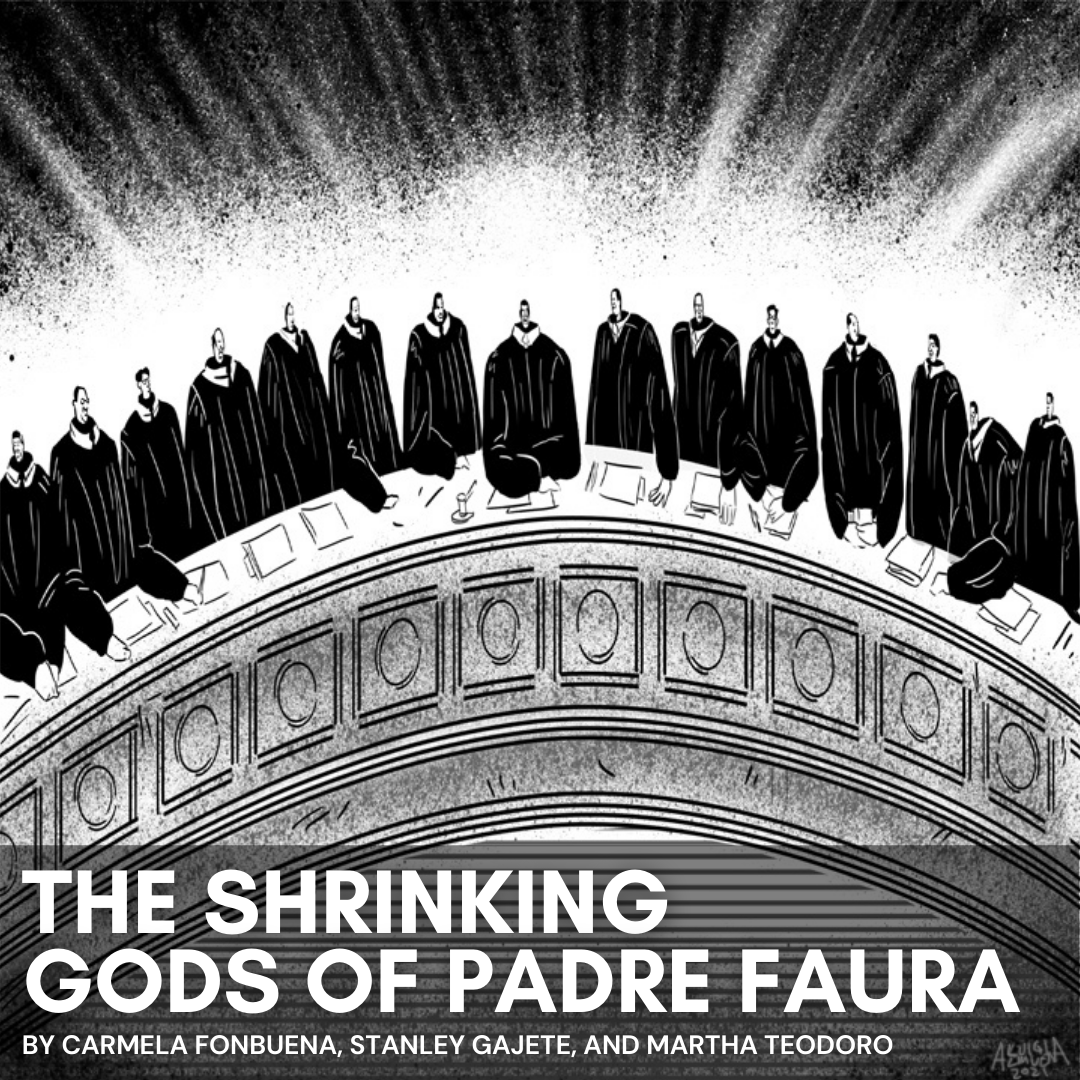 There’s one chink in Gesmundo’s anti-corruption firewall, however.

Supreme Court justices exempted themselves from the scope of the JIB. Their justification: justices of the high tribunal are impeachable officers under the 1987 Constitution and could be removed only through impeachment and quo warranto.

One chief magistrate had been removed through the impeachment route. The late Renato Corona was accused of hiding his wealth and was convicted in a Senate trial in 2012.

Retired justice Noel Tijam, a JBC member, asked Gesmundo during the virtual interview: “[The] Judicial Integrity Board does not investigate SC (Supreme Court) justices. There's an ethics board for SC justices but is that enough?”

Ateneo de Manila University professor Numeriano “Jun” Rodriguez Jr., a lawyer, told PCIJ: “In case of acts committed by the chief justice and the associate justices of the Supreme Court, with imposable sanctions that are short of removal, the powerful tools of research and investigation; the ability to conduct intelligence, surveillance or entrapment operations or lifestyle checks granted to the JIB will not be available.”

Since the JIB is an internal body, its members will be appointed by the Supreme Court en banc, or the full, 15-member court.

The vice-chairperson shall be a retired Supreme Court justice, while the three regular members shall be retired justices of the Court of Appeals, Sandiganbayan, or Court of Tax Appeals.

Under the AO, the JIB may recommend to the Supreme Court disciplinary action against members of the judiciary.

Rodriguez said the success of the anti-corruption effort would depend on the certainty that violators would face the consequences of their malfeasance.

“Corruption, real or perceived, undermines this basic pillar of justice. Like Caesar’s wife, justice must be beyond suspicion,” he said.

La Viña lauded the creation of the JIB as the judiciary would finally have an office dedicated to stamping out corruption.

“It’s an additional layer for [fighting] corruption,” he added.

But it’s not yet operational as Gesmundo’s predecessors had short tenures and seemed to be focused on finishing their judicial careers, La Viña said.

“You cannot put it into place in just one year. You need three to five years to put that really in place,” he said.

Human rights lawyer Abdel Disangcopan said the appointment of a new chief justice should give further impetus on finally making the JIB operational.

A mere creation of the court

La Viña said the JIB’s success would also depend on the qualities of its members. “It all depends on who are appointed, who will do the job,” he said.

“[F]ocused committees sometimes work, sometimes they don’t,” La Viña said. “In the context of the Philippines, it’s not the question of law, because laws are there. It’s a question of who will be appointed in the committee and how serious they are on their work.”

Disangcopan called for transparency in the JIB’s proceedings to help restore public confidence in the judiciary. “If there’s a cloak of confidentiality, it’s sometimes abused and you don’t know what really happened,” he said.

Rodriguez pointed out that despite the qualifications, stature and collective wisdom, and experience of whoever will sit on the JIB, the board is a mere creation by resolution of the Supreme Court.

In contrast, the Judicial and Bar Council, a creation of the Constitution, cannot be dissolved without amending the charter.

“Therefore, the legal existence of the JIB totally depends on the good sense of the Supreme Court. Structurally, this reflects on the stability and independence of the JIB,” he said.

— PCIJ, May 2021
Posted in:
In This Series
Latest Stories