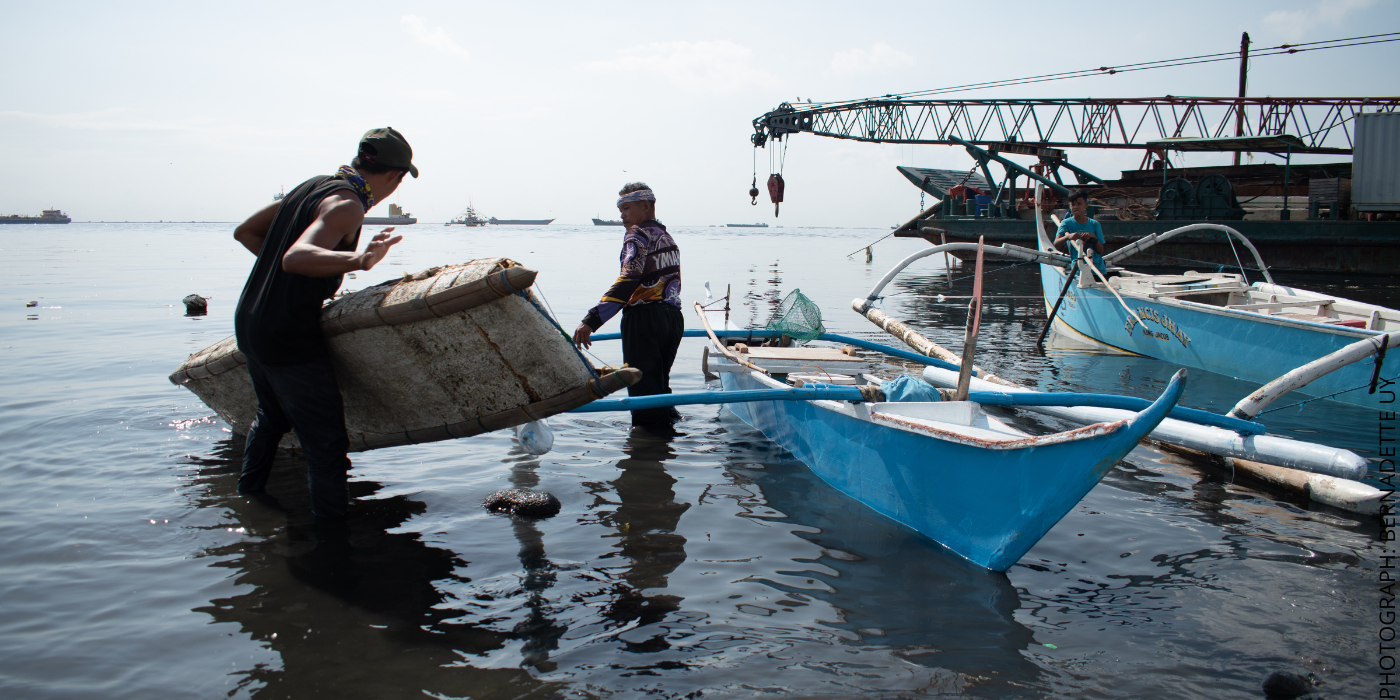 Enduring the current — a photo essay

Inclusive development has always been the outcry of the Filipino people but these calls usually fall onto the deaf ears of the government. Uy’s photo essay features Eduardo, a fisherman in Manila Bay, whose livelihood is just one of those that are in danger as the development plan in the bay is being pushed for implementation.

Early in the morning, the coastal community of Navotas is abuzz with small fishing boats unloading their catch. But Eduardo Dabandan, 49, lugs behind him several slabs of polystyrene foam held together by wooden sticks. For the past 10 years, this contraption has served as his main source of livelihood.

Eduardo grew up in Daram, Samar Province foraging for seashells. When he became a teenager, he went with older fisherfolk to the sea. He moved with his family to Navotas in 1997 and stayed there until 2010, when they were relocated to San Jose Del Monte in Bulacan after a fire razed their house.

Like a fish taken out of water, Eduardo found few opportunities for him in Bulacan. He offered his services as a sweeper at the relocation office. At first, the family was able to make ends meet with his P200 weekly salary. After a month, he realized it was not enough and opted to move back to Navotas to resume fishing.

Whatever money he saved, he sent to his family in Bulacan to pay for their house and other needs. His wife Maricris Dela Cruz, 45, and one of his sons later followed him to Navotas to help him earn money, while four other children stayed in Bulacan.

He’s worried about the children, knowing that it’s different without parents around them.

When he got back to fishing in Navotas, Eduardo found a sidewalk where he could hang a hammock to rest on. Later, he and Maricris built a makeshift structure that became their temporary home. He’s worried they would be asked to move again to Bulacan with the implementation of the Manila Bay Sustainable Development Master Plan (MBSDMP), which involves reclamation. Their shack is just meters away from a backhoe being used for a reclamation project on the coast.

Eduardo is among the many fisherfolk relying on Manila Bay for their day-to-day subsistence, struggling amid the blooming commercial developments around them.

They are almost invisible to the rest of Metro Manila, whose collective memory of Manila Bay usually includes the scenic sunset, people strolling or jogging on the bay walk, and sailing boats at the yacht club. This is just a portion of the key harbor that spans eight provinces. Manila Bay is a strategic location for trade, livelihood, and other non-formal economic activities.

In 2017, the National Economic and Development Authority released the Manila Bay master plan and identified projects, programs and activities for the rehabilitation and development of the bay.

It has four “pillars”: Intercoastal Zone Management Framework, Priority Measures, Enabling Environments, and Optimizing Stakeholder Engagement. According to Rex Victor Cruz, leader of the team of experts in the Manila Bay Task Force, the master plan will fail without any one of the four pillars.

Cruz however clarified that the MBSDMP was not a “complete” plan. It provides guidance to local government units, national government agencies, and other stakeholders in charge of its implementation.

Devralin Lagos, a community worker who attended two meetings to craft strategies for the master plan in 2018, said fisherfolk needed to be consulted as their livelihoods would be affected by reclamation and other projects at Manila Bay.

“Based on my experience in Cavite and Bulacan, people are unaware of the master plan,” Lagos said. “[They should be consulted] if the project really aspires to reflect the concerns of stakeholders, not only of the development designers and government.”

Cruz said the master plan was not set in stone and could still be revised in three to five years. The Manila Bay Task Force is working on three scoping studies focused on liquid and solid waste management and preventing flooding.

Eduardo is hopeful after buying a new outrigger that finally replaced his makeshift boat. The money came from life savings. For him and other fisherfolk in Navotas, every day is a challenge to protect and sustain their livelihoods. Rather than sink them, the master plan, Eduardo said, should help keep them afloat. 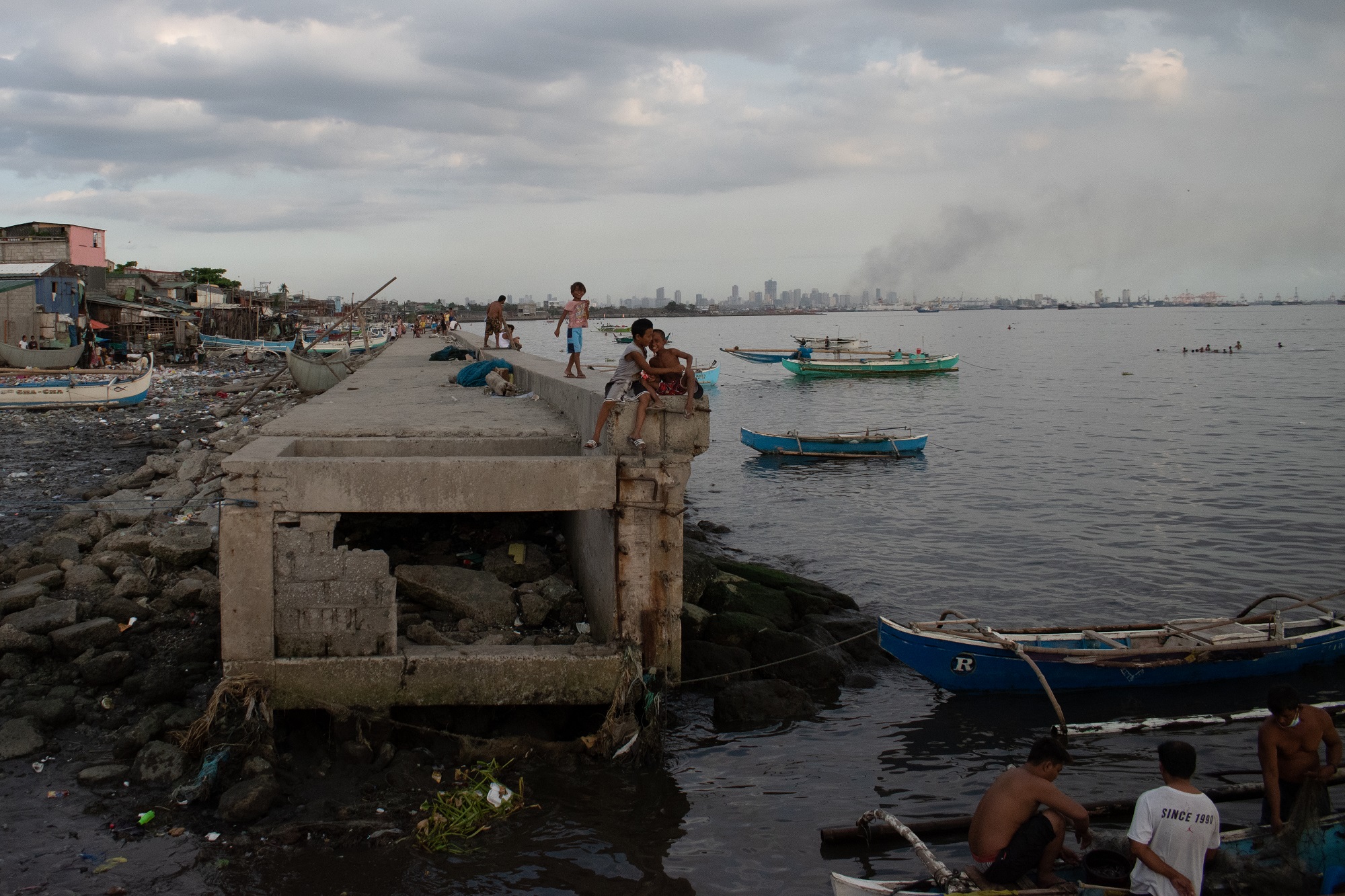 Navotas City’s coastal villages are part of the Manila Bay Sustainable Development Master Plan. Some 4,000 households depend on fishing. 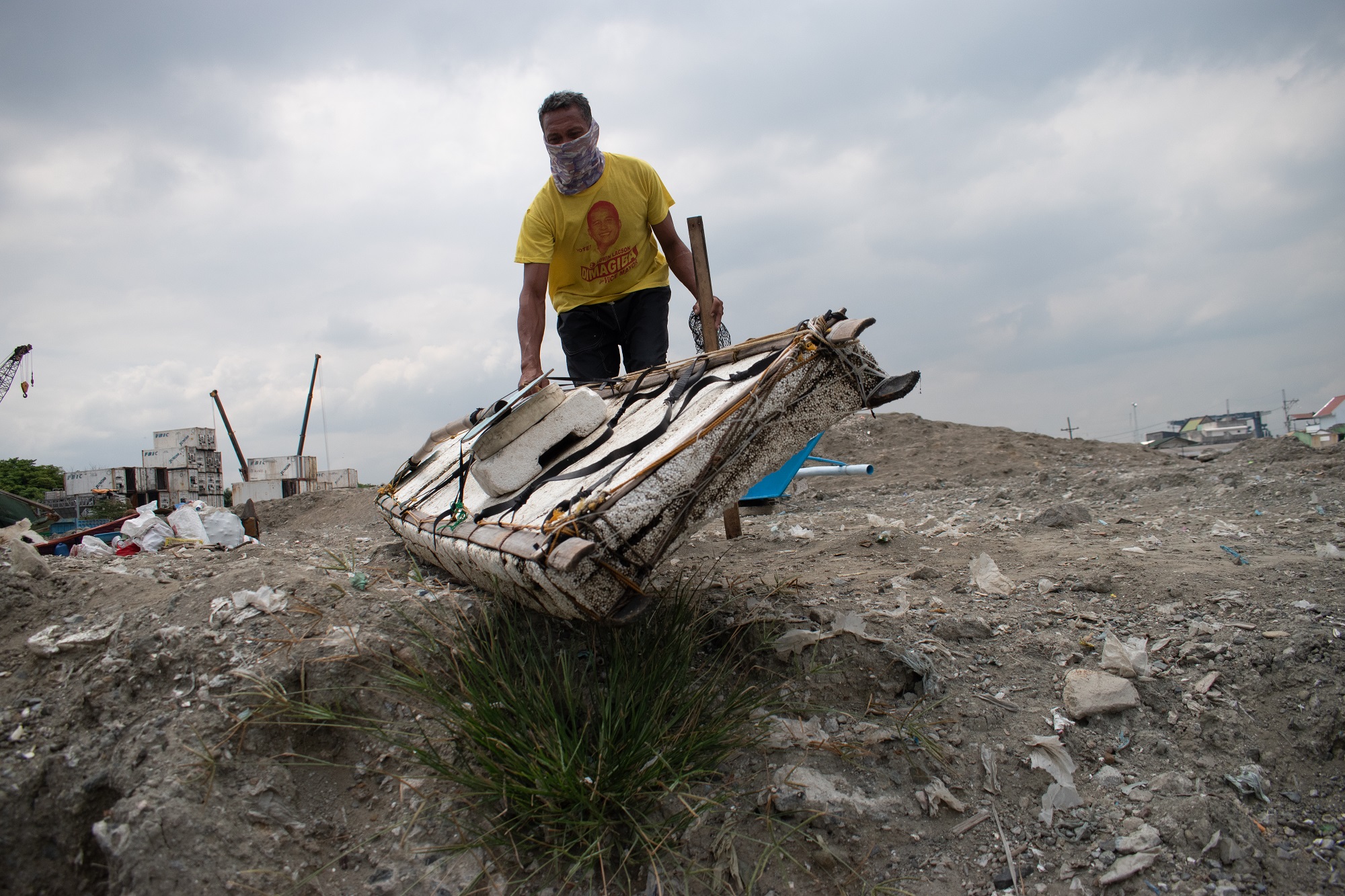 Eduardo Dabandan, 49, has lived in Navotas since 1997, but had to relocate to Bulacan after a fire that razed their house in 2010. The lack of livelihood for fisherfolk in Bulacan forced him to return to Navotas. For more than a decade, Eduardo has used a makeshift boat made of polystyrene foam and sticks for fishing. It does not provide any kind of protection, but Eduardo knows how to swim and observe the environment and weather before going to the sea. 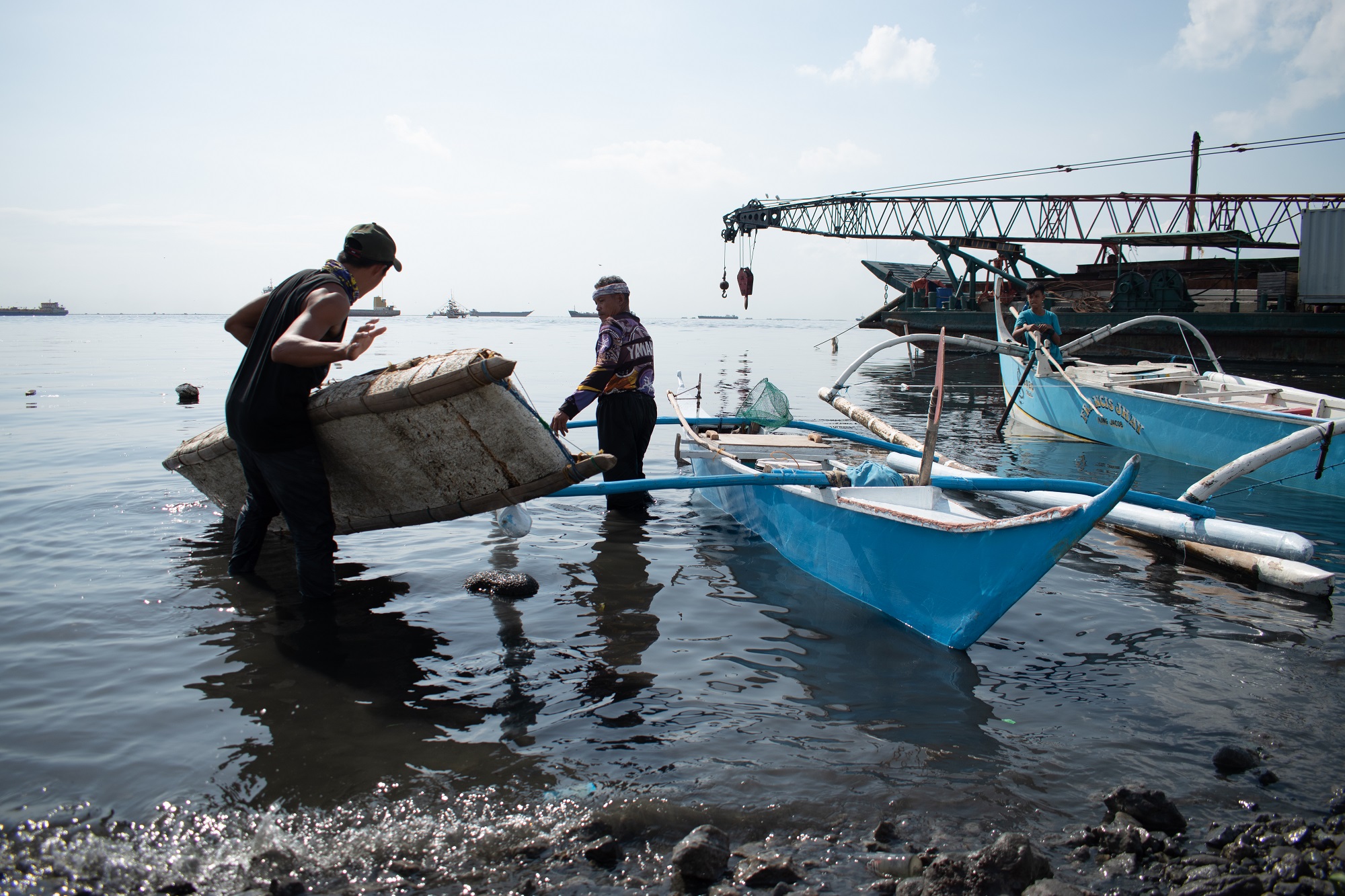 Eduardo carries his makeshift boat as he goes out fishing with his new outrigger. Eduardo and his son Edwin will have to travel more than 30 minutes to reach their fishing spot, where they will stay overnight hoping to catch enough fish to eat and to sell. Pollution and competition with bigger vessels have made it harder to catch fish in recent years. 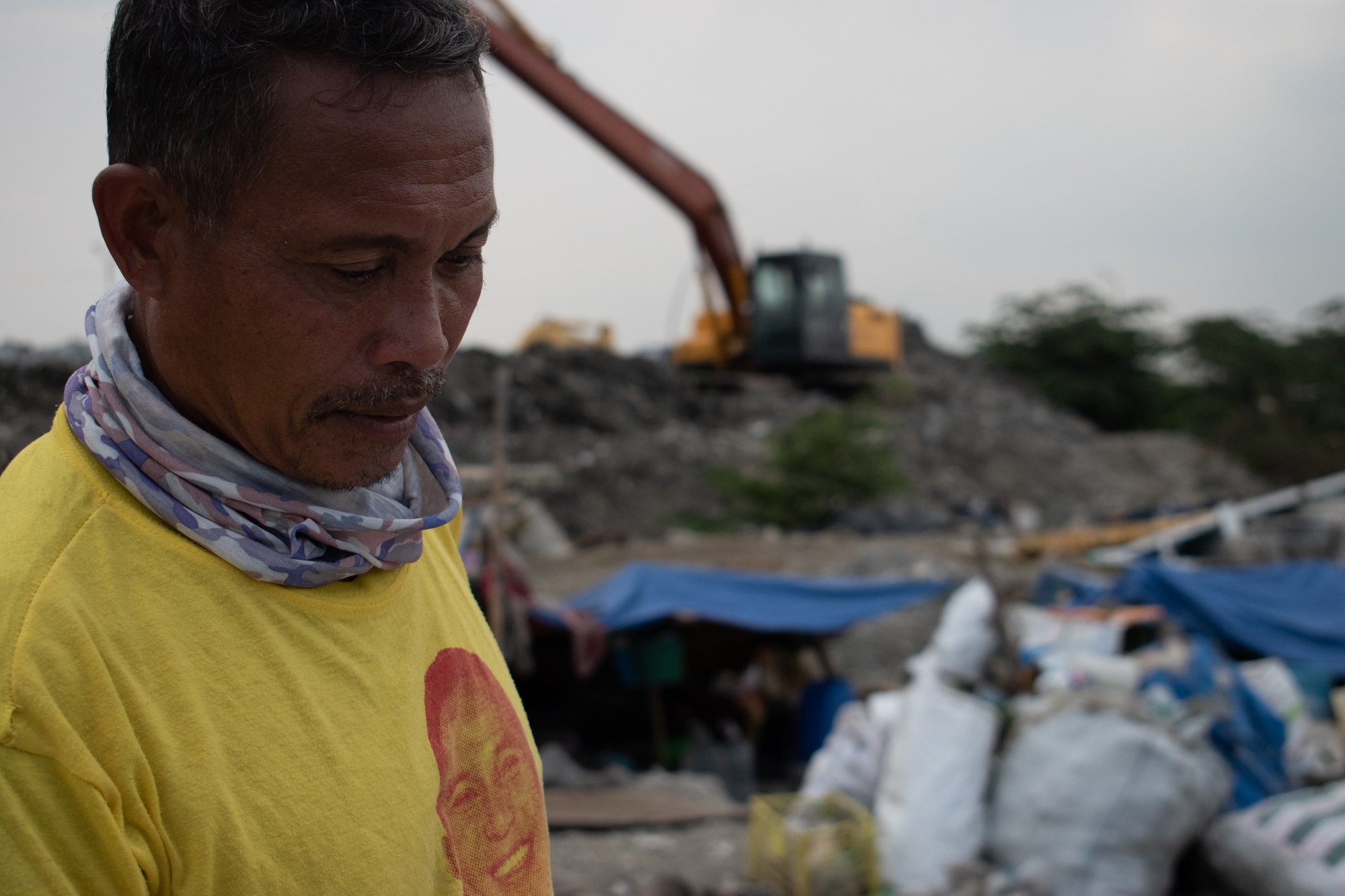 After 10 years of saving money, Eduardo has bought a new boat, named after his youngest son “Marby.” The maiden voyage of "Marby" the boat brings a subtle smile to Eddie's eyes. Eddie is proud to have made both ends meet and save enough to buy a new outrigger. 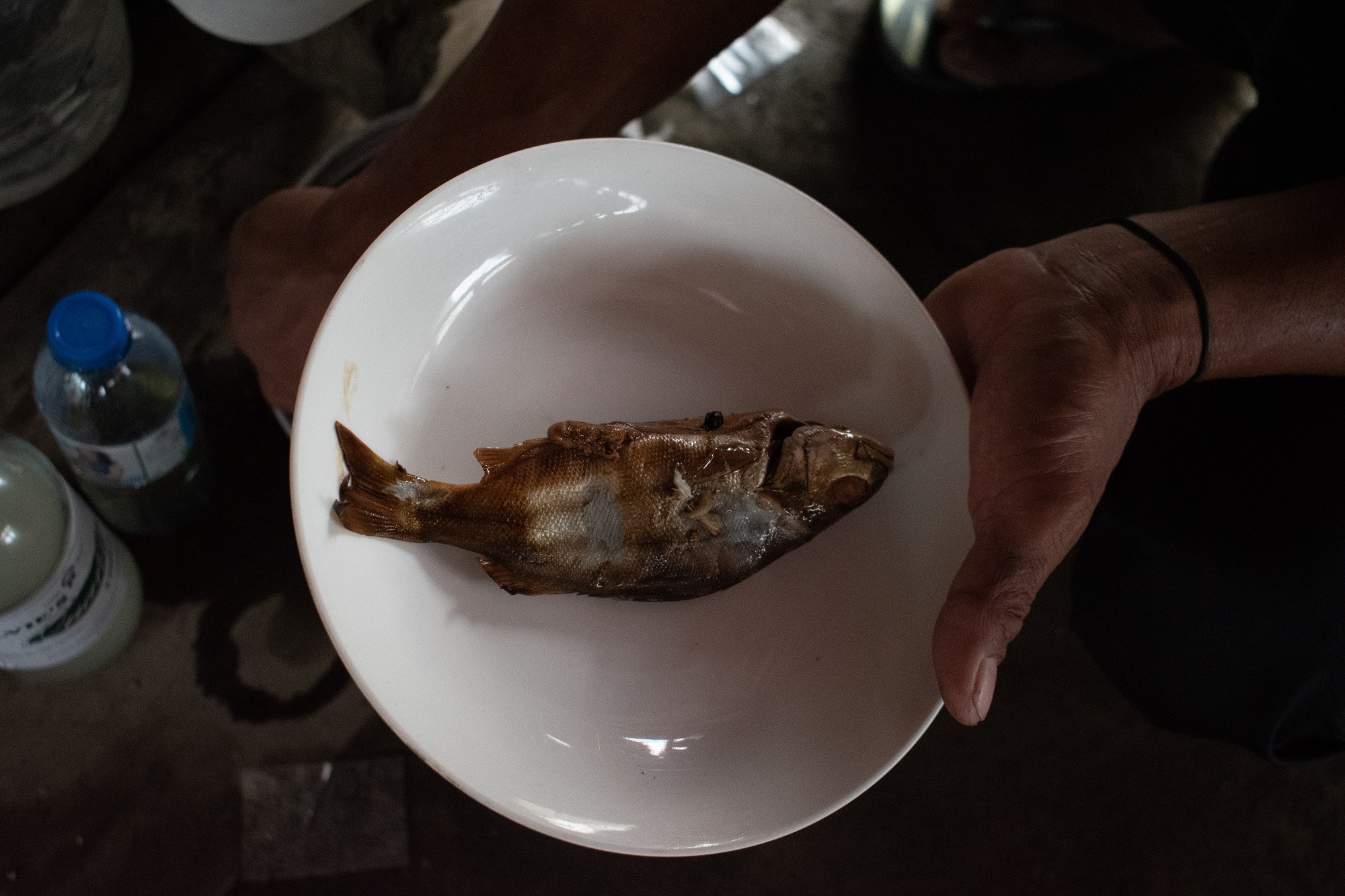 Eduardo earns between P300 to P500 daily from his catch, but on a bad day, this could go down to zero. His wife Maricris Dela Cruz makes sure there’s enough money to buy food, while saving whatever they can to send to their children in Bulacan. If anything, they do not have to worry about their daily meals, because they can get what they need from the sea. 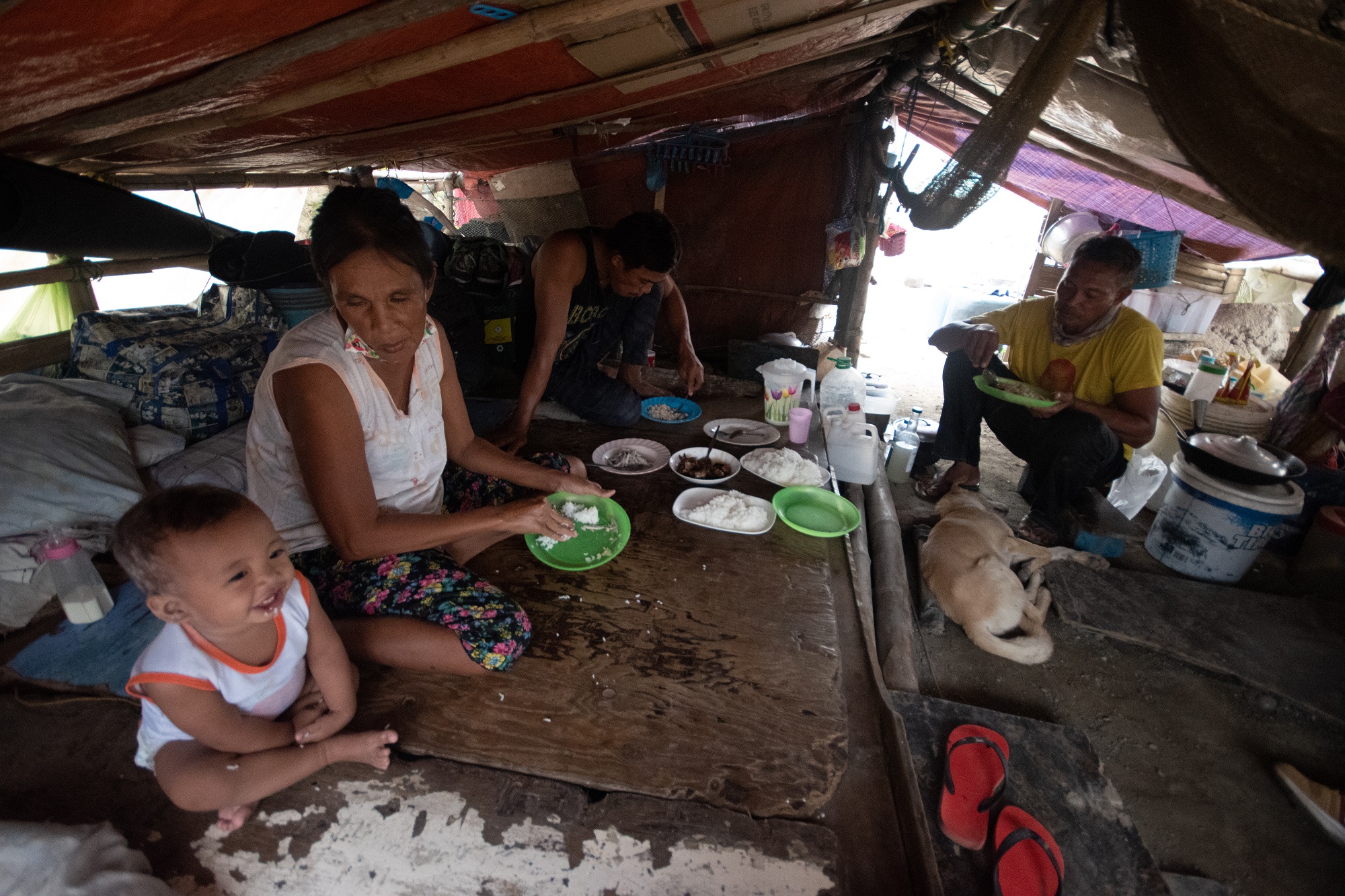 Eduardo and his family eat lunch inside their makeshift tent. In between cooking and preparing for his fishing trip later that day, what worries him is how his four children in Bulacan are coping without their parents. He smiles as he recalls how happy they were during meal time. 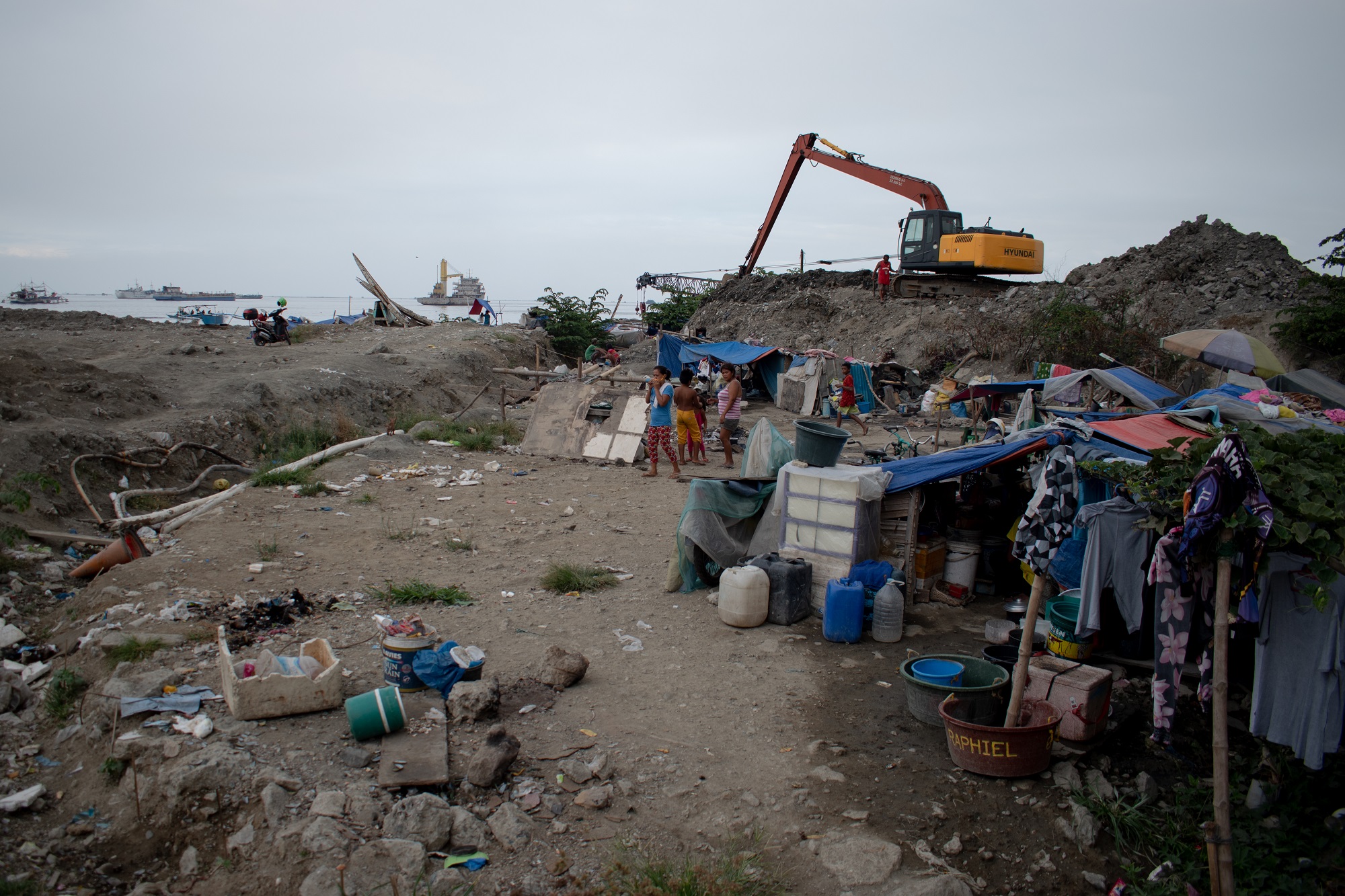 A backhoe used for reclamation sits idle on top of dirt. In this area alone, there are 10 families taking shelter in makeshift tents, all of them fisherfolk who depend on the sea for daily subsistence. Some families staying here are also from the relocation site in Bulacan like Eduardo’s. What they earned at the relocation site was not enough to make ends meet. 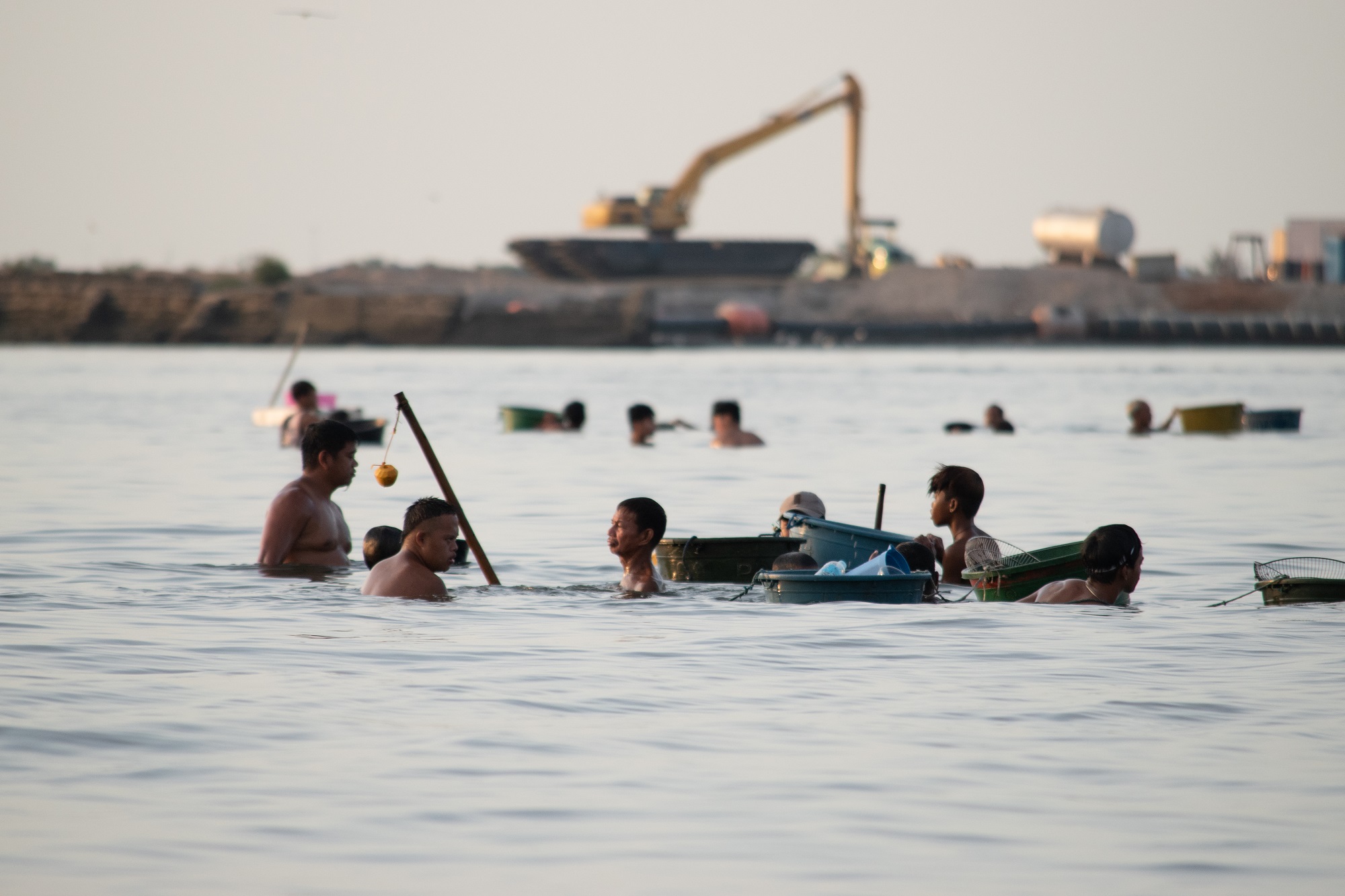 People forage for shellfish as water gets shallow during low tide along the coast of Barangay Tangos South in Navotas City. In the background, a backhoe is parked on a reclamation site. People there have been told they would need to relocate soon to give way to the development of the coast. 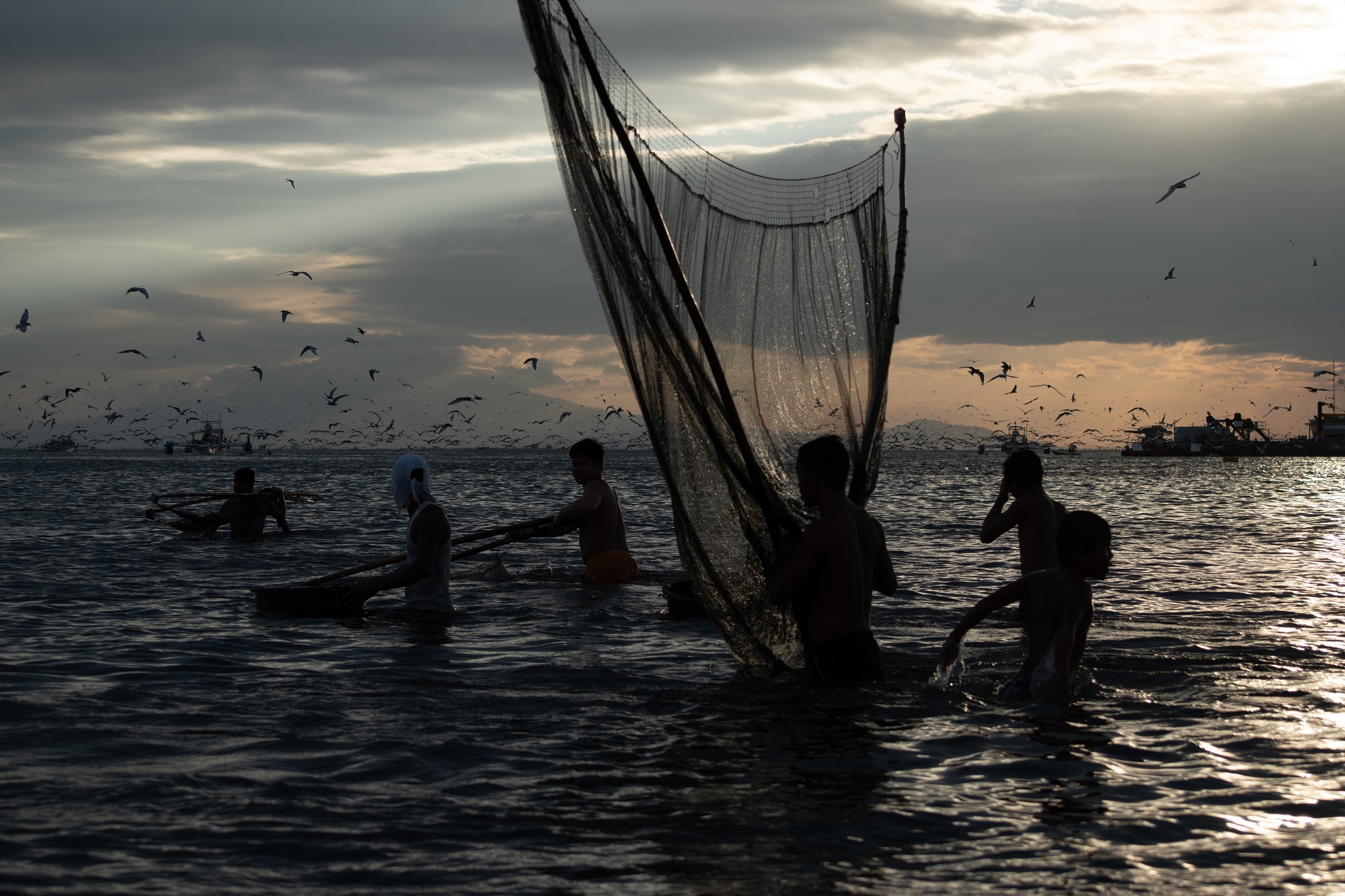 Fisherfolk gather krill as the sun sets. Others harvest what they can as they expect lean days ahead. According to a longtime resident, thousands of birds may be quite a sight, but is actually a bad omen to fisherfolk. The presence of these birds signifies that there will be no fish for the next couple of days. Birds flock near the shore to eat krill and fish that have surfaced because of pollution.