"The question is whether the JBC has satisfactorily or merely perfunctorily performed its constitutional duty...."

Court observers said many of the judiciary's problems are rooted in the JBC, the body that vets nominees to the judiciary.

It changed the process under Martial Law, when Marcos made all court appointments, and under the 1935 Constitution, when the president nominated the justices and the legislature confirmed them.

However, it’s still the president who appoints the regular members of the JBC. Like the high court, the JBC suffers from the perception that it has been co-opted by the executive.

Instances when the JBC did not include the president’s preferences in the shortlist had sparked tension between the two branches. In 2009, for example, Arroyo returned to the JBC its shortlist for the Supreme Court. Puno did not relent.

Vitug also called for a more diverse JBC. “They’re all judiciary insiders. Walang ibang perspectives (There are no alternative perspectives),” she said.

All but one, Justice Secretary Menardo Guevarra, among the seven-member JBC served in the judiciary. Before he joined the government, he was a founding partner of the Medialdea Ata Bello Guevarra & Suarez law firm.

Even the members who are supposed to represent the legislative, private sector, and the academe are former career members of the judiciary.

Ilao was Duterte's classmate at the San Beda College of Law.

Beyond putting the right people in the JBC, there are recommendations for reforms in the appointment process.

The list should be short to limit presidential discretion, for one.

“The objective of the screening is to limit the discretion of the president. If you give the president a list of six or seven names for one position, in some cases even eight, then in all probability the president’s choice will be there,” said Manuel.

Manuel also proposed a requirement of at least 10 years of service for justices of the Supreme Court.

Younger justices will remove any suspicion of loyalties to the appointing power because they will be serving under more than one president, he said.

“When you are appointed justice to the SC, you should not be retiring before the president who appointed you…. That will stabilize the court and will improve the integrity of the court,” he said.

The minimum age for high court appointees under the constitution is 40 years old, but many of the justices enter the court in the 60s, leaving them less than 10 years on the bench.

The proposal was made amid Duterte's notoriety for his short-term appointments.

It has been compared to the revolving-door policy in the military. “Parang chief of staff ng armed forces. Short term. Pagbigyan mo lahat. Patronage (It’s similar to the chiefs of staff of the armed forces. They have short terms. It’s a reward. It’s patronage),” said Vitug.

Duterte’s first appointee, Teresita Leonardo-de Castro, served for less than two months. Bersamin was chief justice for 11 months, while Peralta, who availed himself of early retirement, served for one year and five months.

It is not good to have short terms because there is less time to implement reforms, said Gatmaytan. “The cycle of [short-term] chief justices doesn’t help stability. These are very short terms. Everyone is being given a shot,” he said.

It’s the same revolving-door policy for the associate justices. In five years, Duterte has appointed 16 to the high court and among them, six have retired. Four of them served the court for less than two years while the other two served for less than three years.

In April, Duterte finally appointed Gesmundo, who will serve for five years. He replaced former Chief Justice Diosdado Peralta, who availed himself of early retirement one year before he turned 70. 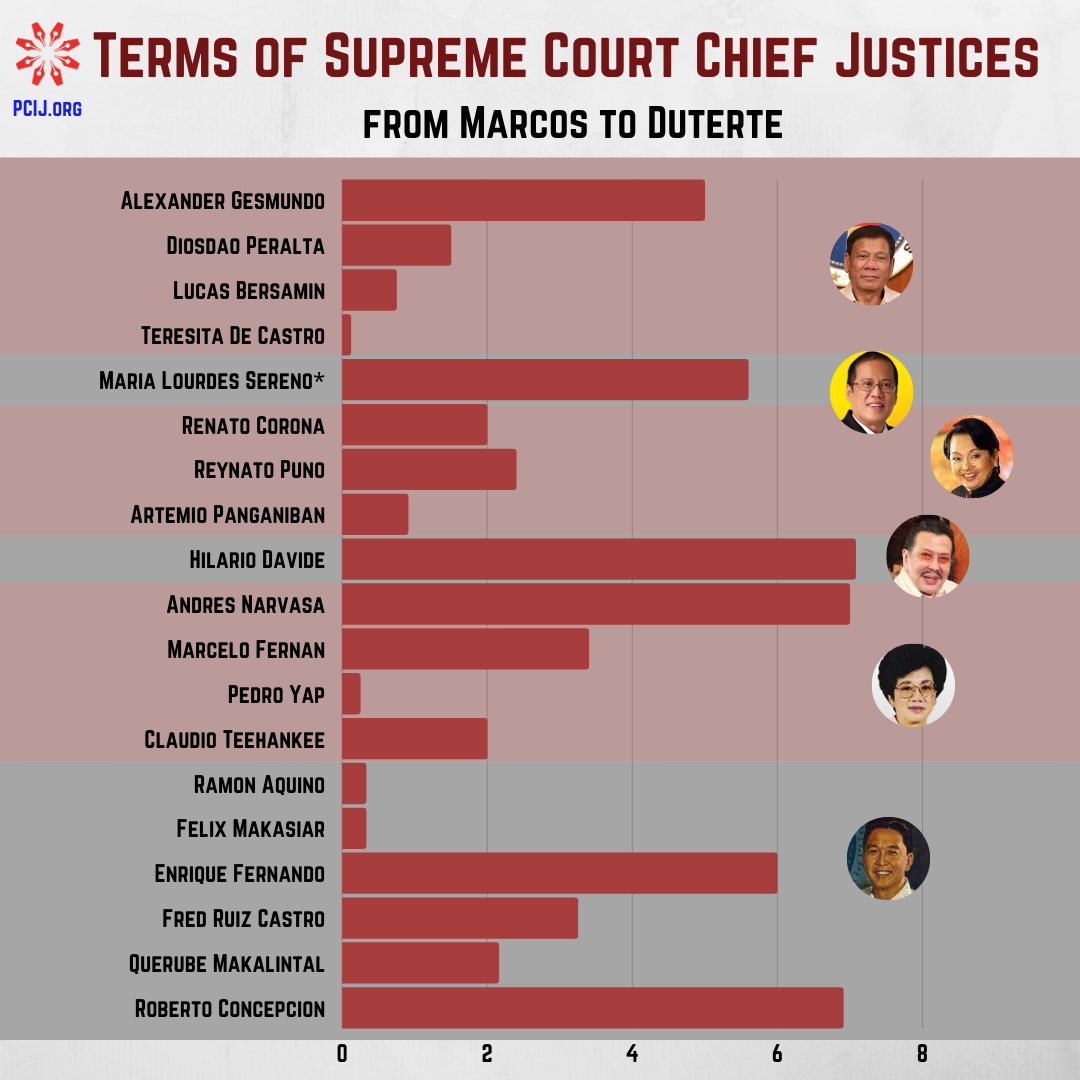 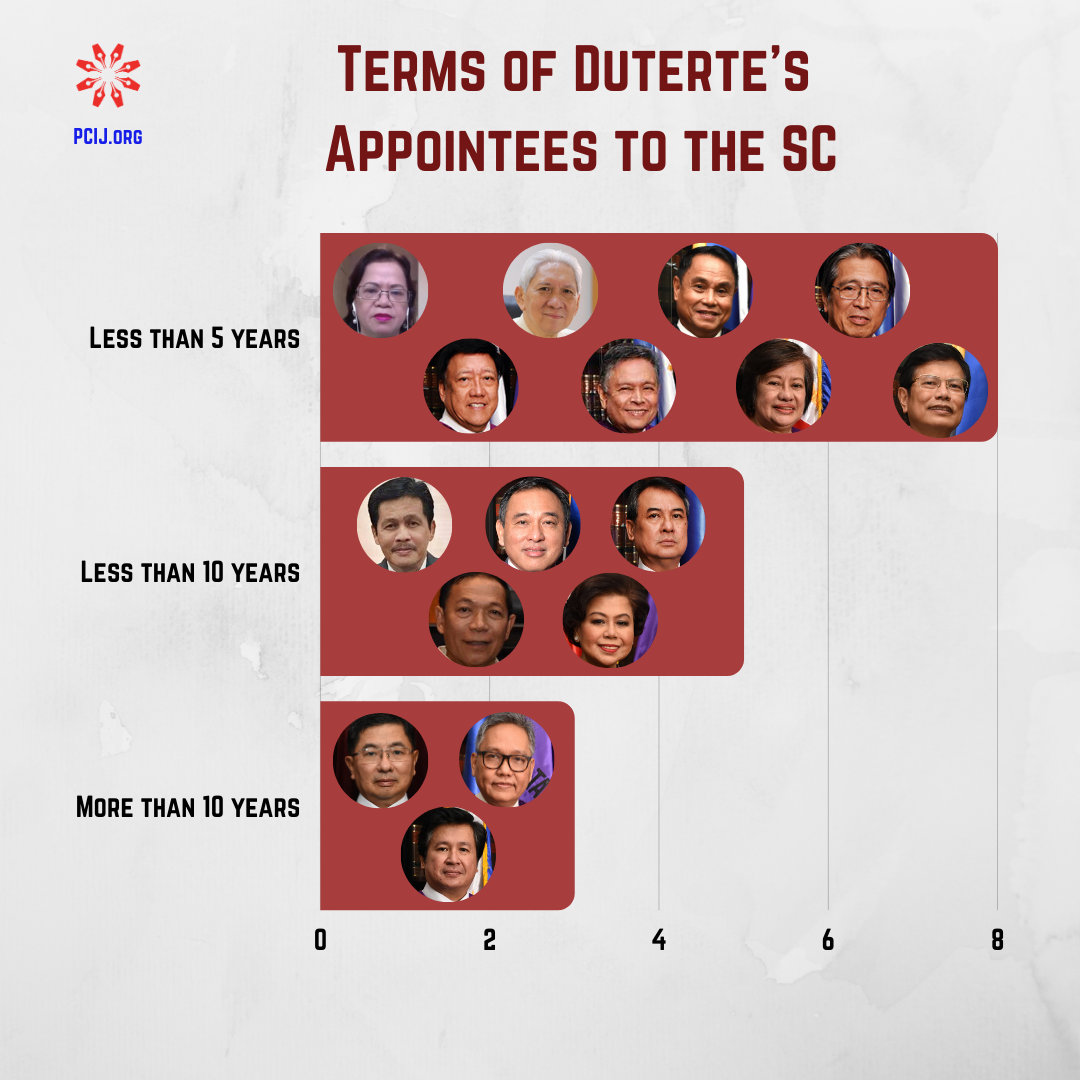 Vitug said the revolving-door policy reflected Duterte’s lack of respect for institutions, citing as another example the term-sharing deal he brokered for the speakership of the House of Representatives.

Panganiban, in a separate newspaper column, also scored the JBC’s vetting process over what he said was the unprecedented number of associate justices availing themselves of early retirement.

Other than Martires and Peralta, two other associate justices retired early. Priscilla Baltazar Padilla retired after four months on the bench due to “physical disability.”

Edgardo delos Santos availed himself of early retirement after a little over a year in the high court, also due to health reasons. Panganiban revealed in his column that delos Santos was facing a second quo warranto petition, details of which were not available, after a first one was dismissed due to procedural errors.

“The question is whether the JBC has satisfactorily or merely perfunctorily performed its constitutional duty of screening and ‘recommending… [to the president] at least three nominees… for every vacancy…’ in the judiciary,” Panganiban wrote.

This revolving-door policy in the Supreme Court is costly.

De Castro, who served only 46 days as chief justice, receives the full benefits of a retired chief justice. An earlier PCIJ report showed that retired chief justice took home anywhere from P8 million to P30 million in lump-sum cash gratuity on top of “survivorship benefits” equivalent to the current salary rate for the position and other perks.

It’s the same for associate justices who served for less than two years. Even Padilla, who did not write any decision in her four months in the high court, will get the retirement benefits of a Supreme Court justice.

The rewards don’t end there for some of them. Like generals in the police and the military, several justices have been rewarded with government posts after their retirement.

This, too, doesn’t bode well for the independence of the court. “It makes the impression that they need to favor him [during their term in the Supreme Court to get these posts],” said Vitug. – with research from Stanley Buenafe Gajete and Martha Teodoro

Next: The other battle: Backlog