Whoever steps down among “the Gods of Padre Faura” – and all judges and justices in the Philippines, in fact – gets to take home a stash of cash and a bagful of fancy tokens. But the recent parade of short-term Supreme Court justices is costing taxpayers a lot more in terms of payable retirement benefits.

THEY SERVE for just a few days or at most two years, but get fat payouts when they retire. Unto their dying days they are assured of progressively increasing “survivorship” benefits and perks. And upon their death, these monies will pass on to their surviving spouses.

Recent appointees to the posts of chief justice and associate justice who are retireables have ushered in a revolving-door scenario at the Supreme Court. The series of line-change events in the high court has not only interrupted efforts to address issues or launch reforms, its financial cost is just as worrisome. Magistrates entering and exiting at a quick pace are costing taxpayers a lot more in terms of payable retirement benefits.

For starters, when a chief justice or associate justice bows out of the high court, s/he gets to bring home a bagful of goodies: the Philippine flag; the SC flag, timepiece, ring, seal, pin, pen, brass shingle, gavel, and judicial robe; a photo album; a “Book of Decisions”; a “Statuette of Judicial Excellence”; a plaque of recognition; and The Chief Justice Jose Abad Santos Award.

Up to PhP2 million is reportedly allotted to pay for his/her farewell party, and a separate amount, for an anthology of his/her ponencias or decisions is printed, at the high court’s expense. Recent retirees have opted, however, to publish more expensive hard-cover coffee-table books, and host fabulous goodbye gigs.

In the case of just-retired chief justice Lucas P. Bersamin, about a thousand guests attended a dinner organized in his honor last Oct. 15 at the posh Solaire Resort & Casino, and received copies of the book Chief Justice Lucas P. Bersamin: His Enduring Legacy. Last Friday, yet another farewell party for Bersamin was held at the Supreme Court for friends and employees. 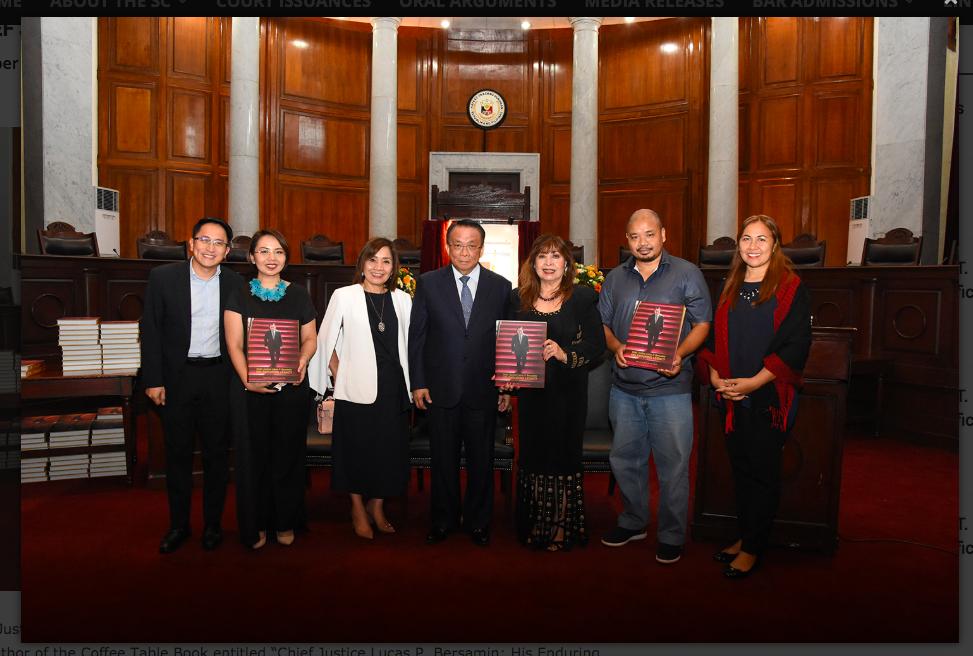 More than the mementos or “tokens,” though, whoever steps down among “the Gods of Padre Faura” – and all judges and justices in the Philippines, in fact – gets to take home a stash of cash, according to a package of generous retirement benefits that Congress passed into law in 2010, and which the high court enhanced further in a 2017 en banc resolution.

The law has allowed recent and earlier retirees from the Supreme Court, including chief justices who had served for only a few weeks or years, to take home from PhP8 million to PhP30 million in lumpsum cash gratuity, a retired high court justice told PCIJ. This amount represents five years’ worth of the last monthly salary, plus the value of leave credits that the retiree had earned from the beginning of his or her service in government.

Should they survive until five years later or longer, they will continue to receive monthly pension or “survivorship benefits equivalent to the current salary rate for the position and rank” they had last held. Upon their death, the same benefits will pass on to their surviving spouses.

On taxpayers’ account, too, a retired chief justice is entitled to receive an allowance “for communication and the services of a secretary and a driver,” while a retired associate justice, just a secretary or a driver, according to a retired high court jurist.

The President gets more, or about PhP300,000 gross salary a month, as the nation’s sole Salary Grade 33 employee. This is, of course, even much less than what senior executives receive in the Bangko Sentral and some government-owned and -controlled banks and corporations.

But what better paid public officials do not get are other pension and survivorship benefits that all retired justices and judges, or their spouses, could collect unto their final days.

Getting appointed to a higher post a few years or even months before retirement can even be almost like winning the lotto. For sure, rising from associate justice to chief justice rank has always been a much-coveted goal for those sitting in the Supreme Court. In recent years, however, aside from the honorific value of the promotion, there has also been the significant increase in retirement benefits for the upgraded jurist. 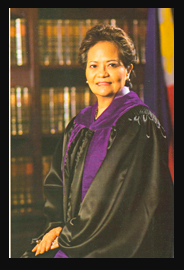 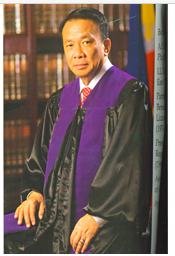 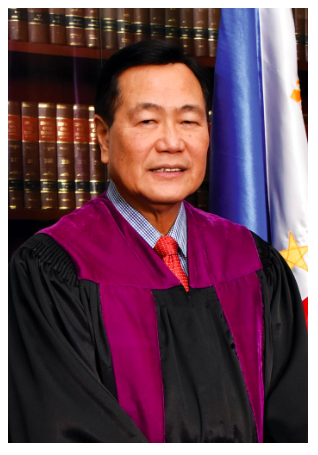 FO The case of retired chief justice Teresita J. Leonardo-de Castro who served as the country’s top jurist for only 46 calendar days (Aug. 25 to Oct. 10, 2018) is most instructive. In that brief period, she rose to Salary Grade 32 rank (PhP233,000 to PhP264,000 in monthly salary) and retired in greater financial bliss.

As associate justice with Salary Grade 31 rank in 2017, the Commission on Audit’s Report on Salaries and Allowances (ROSA) said, de Castro annually received PhP1.9 million in basic salary (PhP147,000 divided by 13 months), apart from PhP744,000 in honoraria as a member of the Presidential Electoral Tribunal; PhP2.2 million in allowances; PhP1.3 million in incentives; and PhP628,000 in discretionary fund.

The same uptick in pay will be the good fortune of anyone of the three short-listed candidates to the post of chief justice, who are now all serving as associate justices: Diosdado M. Peralta, Estela M. Perlas-Bernabe, and Andres B. Reyes Jr. All long-termers in the judiciary, a promotion to the post of chief jurist will mean a financial windfall for all three nominees.

A retired Supreme Court justice insists, though: “The difference in pay is substantial, but of course, there is the honor attached to the post.” The justice also says that the total payout varies  depending “on how long you have been in the judiciary, longer more because of longevity. It amounts to PhP8 million to PhP30 million per justice.” 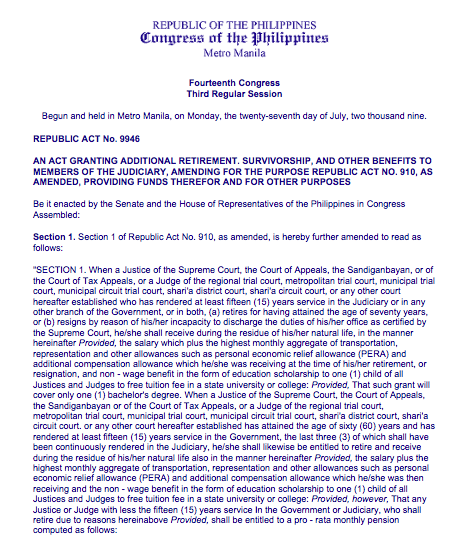 It was in September 2017 that the Supreme Court, in Administrative Matter No. 17-08-01-SC ruled, on the implementation of Republic Act No. 9946 or “An Act Granting Additional Retirement. Survivorship, and Other Benefits to Members of the Judiciary” for all retiring and retired but still surviving justices and judges.

Approved by the 14th Congress and signed into law by then President Gloria Macapagal-Arroyo in January 2010, R.A. No. 9946 amended Republic Act No. 910 that was enacted in 1954 and which provided for retirement and death benefits on compulsory or optional basis for justices of the Supreme Court and Court of Appeals only.

The high court, in its September 2017 resolution on the implementation of R.A. No. 9946, granted broader and more generous retirement and pension benefits for all retiring justices and judges, and allowed the retroactive coverage of benefits for those who had retired or for retirees who had died before the effectivity of the law. The standard retirement package for a justice or judge includes thus:

Yet even before retirement, for every three years of service in judiciary, justices, judges, and court personnel receive a percentage increase in their basic salary. 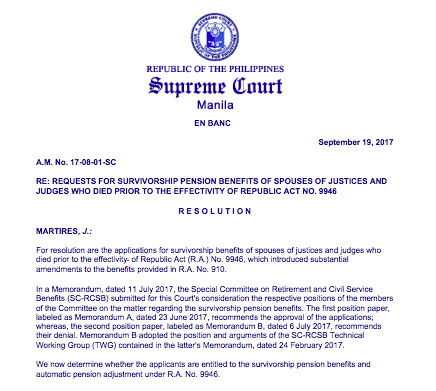 The high court’s resolution penned by then Associate Justice Samuel R. Martires, who is now Ombudsman, also approved the retroactive application of the “survivorship” benefits for judges and justices who had retired before the effectivity of R.A. No. 9946 on Feb. 11, 2010.

(Martires was Supreme Court associate justice only for 17 months from March 6, 2017 to July 31, 2018. Days ahead of his retirement, on July 26, 2018, President Rodrigo R. Duterte appointed him as Ombudsman for a full seven-year term.)

The retroactive benefits will be computed from the date of retirement and until the death of the justice or judge, and his or her spouse, said the retired high court justice. All 15 justices led by then Chief Justice Ma. Lourdes P. Sereno concurred in the 22-page resolution.

In the resolution, the high court resolved to:

Presumably, the generous pensions and perks are meant in large part to keep members of the bench away from temptation during their time in the judiciary.

A justice who had served in the Judicial and Bar Council also says that the generous retirement package for judges and justice draws from this rationale: “To make us very independent even after retirement. Sa judiciary, lahat ng judges covered ng benefits kahit medyo marami iyan.”

“At a certain age, you retire at 70, many will not last for long,” the justice observes as well. “They would incur costs for medical expenses, maintenance medicines. I know of one who has cancer and is now on chemo.”

As of 2018, the Department of Budget and Management’s “Judiciary Staffing Summary” listed a total of 1,685 judges (regional, city, circuit, municipal, Shari’a courts).

Shortlisted: The JBC interviews with the CJ nominees

One has been chosen but who is the fairest, fittest of them all? Three associate justices of the Supreme Court were nominated to the chief justice's post. What vision, judicial philosophy, body of jurisprudence, and character do they offer? Read back to know!