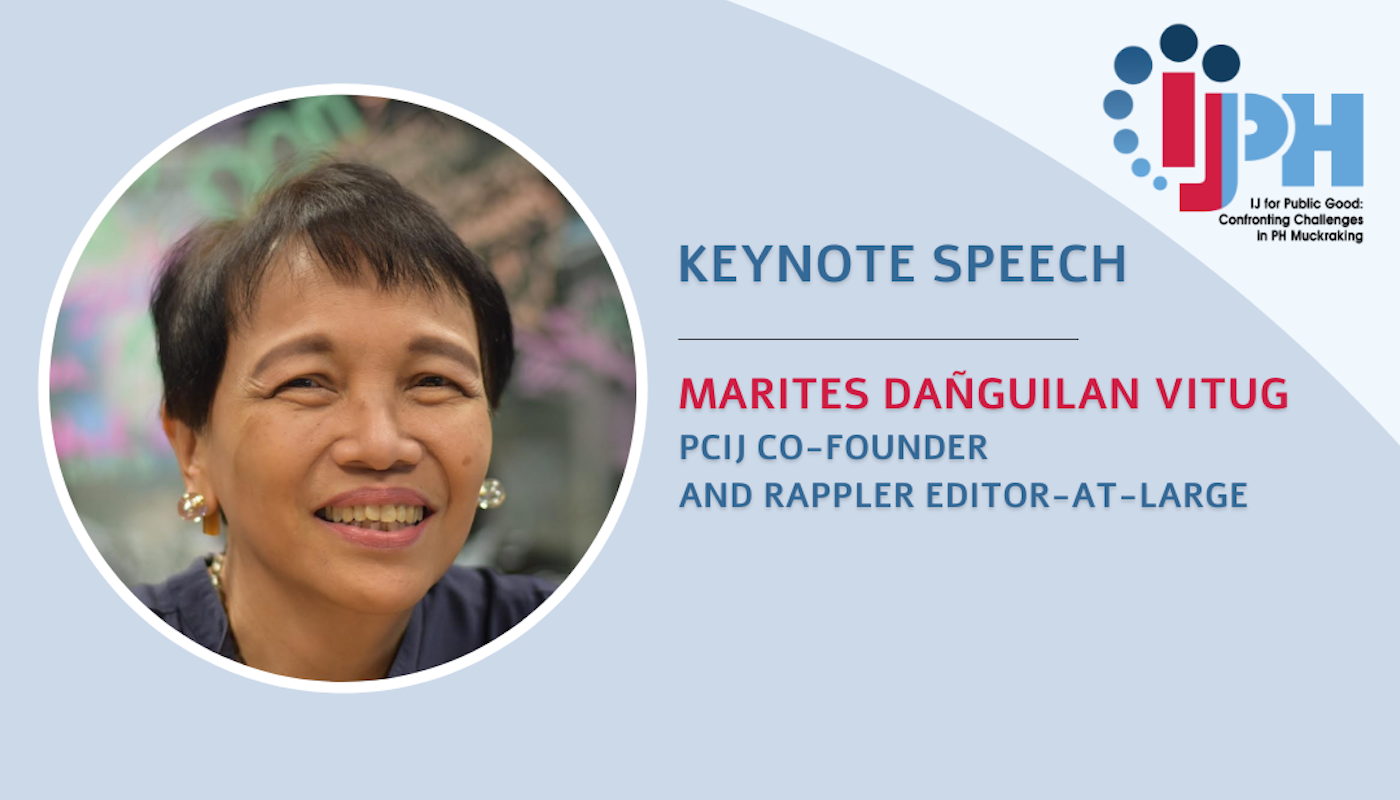 Good morning to everyone!

It’s great to be here, with colleagues and friends, especially the younger journalists who are starting to chart the journalism of tomorrow.

It’s exciting to be with academics in the communications field, you who shape young minds to embrace journalism as a calling to serve the public good, even in times of uncertainty.

It’s wonderful to be with representatives from civil-society groups, you who are part of our community of resource persons as well as amplifiers of facts, so that journalists’ stories are acted upon, so that they lead to changes.

This second national conference on investigative journalism is timely. It comes during a critical juncture: In six months, we will be voting for a new president. At stake in the 2022 presidential election is nothing less than the future of our democracy.

Dear friends, democracy is on the ballot.

The good news is: Democracy is valuable to many peoples of the world and remains popular globally. A 34-nation Pew Research Centre survey in February 2020 showed that support for democratic rights is widespread. But here’s its worrisome finding: “Commitment to democratic ideals is not always strong and many are unhappy with how democracy is working.”

This is a red flag—and the consequences are dire. When democracy declines, civil liberties and freedoms are curtailed and leaders are not held accountable; nations become deeply polarized that intolerance prevails; and the rule of law is broken. Governments give short shrift to the rights of citizens.

The Philippines, unfortunately, is one of the countries where democracy has been in decline. In the 2021 Rule of Law Index, the Philippines ranks 6th among 8 countries in Southeast Asia covered by the survey. We’re just notches higher than Myanmar—which ranks 7th—and  Cambodia, which ranks last.

Rule of law is the glue that binds our bedrock values. Shattering the rule of law is Duterte’s single most devastating legacy. He has set us back in our march towards being the most vibrant democracy in Southeast Asia.

At no other time since the light of democracy shone on our shores 35 years ago have we experienced unrelenting threats to our freedoms.

One pillar of a democracy is freedom of expression. It is the overarching right on which freedom of the press is anchored.

For the young ones in the audience,  I would like to go back in time and reflect on how it was to be a journalist during the martial-law years under Ferdinand Marcos and how it is today under the autocracy of Rodrigo Duterte. These eras share basic similarities but the conditions that enveloped them have changed.

I started out as a reporter during the dying years of martial law in the early 1980s. We lived in a world that was black and white. The enemy of the media was clear: it was martial law. It was the authoritarian rule of Marcos. It was the state.

The single biggest threat to press freedom was the dictatorship. State censorship reigned. The rules were clear: no one was to write critically of the president, the first lady, Imelda Marcos, and the military.

Media organizations were shut down: TV, radio and print. Propaganda sheets took over, a monotone of government-friendly news and commentary. Opposition leaders, activists, including journalists, were jailed.

The lines were drawn between the enemy and the journalists.

When Benigno “Ninoy” Aquino was assassinated in 1983, a storm of protests washed over the country. The silence and docility of many years gave way to a flood of tears and anger.

That was when the international community began to pay attention to the Philippines. The US, which was backing Marcos, started to distance itself from its ally.

This gave the media some space: the alternative press or mosquito press—noisy, buzzing in many peoples’ ears—was born. These newspapers covered the opposition extensively, reported on stories that were critical of the Marcos regime.

Xerox journalism—photocopied stories in the foreign press about the Philippines—thrived.

In 1986, a popular revolt threw out the Marcoses. But decades later, they have taken their name out of the gutter and given it a new sheen.

Today, underneath the trappings of a democracy such as free elections, an ostensibly free media, and the absence of martial rule, the media are under siege. The threats to a free press have returned, in different forms, with a vengeance.

This is the first time, since Marcos was deposed in 1986, that we are losing our grip on democracy, courtesy of an autocratic president who is using state agencies to weaken the media.

Here’s how his playbook works. He threatens the news media on two fronts—the owners and the reporters—through vile public statements. Then he lets loose government agencies like the Bureau of Internal Revenue and the Department of Justice on media organizations he hates. Add to this the use of state resources for disinformation to spread untruths about news outfits and undermine their credibility.

Duterte was still president-elect when we saw a foreboding of what was to come. The case of the Davao reporter who asked a straightforward question to Duterte about his health—and a copy of his medical certificate—stands out. In a victory rally, the president-in-waiting poured his ire on the reporter saying he should have asked him the condition of his wife’s vagina.

A couple of years later, this intolerance surfaced when Malacañang banned a Rappler reporter from covering Duterte.

Not far behind are government bodies which either do the president’s bidding or scramble to please him.

Last year, in July, Congress shut down ABS-CBN, a big blow to Philippine media. Not only did it hurt thousands of employees, it lashed at our freedom to report.

Early in Duterte’s term, the Bureau of Internal Revenue filed tax evasion cases  against the owners of the Philippine Daily Inquirer, the Prieto family, and Rappler.

What was menacing was the order of the Securities and Exchange Commission to shut down Rappler.

The hand of the justice department, then under Secretary Vitaliano Aguirre, was apparent in the filing of a cyberlibel case against Rappler for a story written in 2012, months before the cyberlibel bill became law.

Beyond the media, Duterte used the courts to intimidate and silence the critics. Senator Leila de Lima has been in jail for more than four years. A sedition case hangs over the heads of some activists.

When the coronavirus hit us in 2020, journalists began to fight a bigger battle as we faced the twin perils of Duterte’s authoritarian rule and the pandemic.

Remember what happened last year? Government cracked down on netizens for their social media posts supposedly critical of the Duterte administration.

In Cebu, a film writer was arrested for her satirical message on the coronavirus.

The labor department threatened to have a Filipino worker in Taiwan deported for her anti-Duterte posts on Facebook. These sent chills to the public.

What was attacked was our freedom to speak up, to engage in discussions, to give our opinions on a range of issues, from the controversial and contentious to the safe and quiet. What happens then to our cherished freedom to express our ideas?

People and virus are enemies

Bill Gates said that “this is like a world war, except in this case, we’re all on the same side. The coronavirus pandemic pits all of humanity against the virus.”

But authoritarian leaders like President Duterte don’t see things this way. In his mind, people are as much the enemy as the virus. This stems from his narrow world view whereby he sees the pandemic from a single lens: that of public order.

That’s why we witnessed the heavy hand of the police during a crisis that demands an extensive public health response. There was a time last year when more people were arrested, warned and fined for violating the quarantine (136,517 as of April 20, 2020) than those who were tested (almost 90,000 as of April 28, 2020).

At least one life has been lost. A former solider, was shot dead by the police when he supposedly attempted to breach the lockdown.

This happened after Duterte said, “Shoot them dead!” referring to quarantine violators.

Within this forbidding atmosphere, new and old laws were used to go after people who criticized Duterte and his response to the coronavirus outbreak. The first Bayanihan Law opened the floodgates to the state to go after those who spread “false information regarding the COVID-19 crisis on social media and other platforms…”

As if this was not enough, the zealous Justice Secretary Menardo Guevarra issued an order authorizing the NBI to investigate "alleged deliberate spread of misinformation and fake news" related to the coronavirus.

Here’s the irony: no less than President Duterte and his health secretary, Francisco Duque, have made false claims on the coronavirus.

We must remember that  the State can only clamp down on free expression when what citizens say poses “clear and present danger.” This is a high bar to hurdle.

The Supreme Court has set four instances when the State may impose punishment: pornography, false or misleading advertisement, advocacy of imminent lawless action, and danger to national security.

But with a government that puts public order on a pedestal, above everything else, it is up to us to protect our freedom of expression.

Thus, this gathering of journalists, academics, and civic-minded citizens is one way of protecting our freedom of expression. It is one way of helping our democracy flourish.

Journalism’s big and noble mission is to change things, to improve the conditions in our communities, to make lives better.

This may sound too lofty, something left to government officials, politicians and policy makers. But no, this is ours as well.

My generation learned in school and in the practice of our craft that we’re merely supposed to inform the public on the news of the moment. Of the day. To bring them bits and pieces of newsworthy events, personalities.

For columnists and editorial writers, to air opinions and positions on crucial issues. All these, so that our readers, viewers and listeners can make informed decisions.

Sure, that still holds true today.

But the times, they nudge us to move a step forward and aim for change, that the informed decisions lead to electing politicians who are honest, who care about lifting our standard of living and not theirs alone; who seek to narrow the cavernous gap between the wealthy and the rest of us; who work to provide the basic services so that we live our lives with decency and dignity; who do not rule with impunity.

Thus, I have always believed that journalists should move a step forward and aim for change. Here’s where investigative journalism can make a contribution.

The PCIJ, which was born in 1989, just a few years after the country regained its democracy, stands behind this core mission.

A lot of work goes into doing investigative reporting. But the results, the reforms we aim for do not happen quickly. No action, no change takes place even after we’d written consistently about malfeasance in certain institutions and by officials for whom integrity is completely alien territory.

I have once likened our work to throwing pebbles into still waters, each pebble creating ripple upon ripple until it reaches the shore. This is what happens every time we write a story. But many times, the ripples go unnoticed, quiet as a whisper.

I’ve learned to take the long view. Change doesn’t come swiftly and in dramatic ways. Change happens when communities and journalists connect with each other.

We all need to work together, reporter and teacher, editor and academic, activist and journalist.

I am really glad this conference has brought us all together. Good luck and more power to all of us!

Thank you for listening.