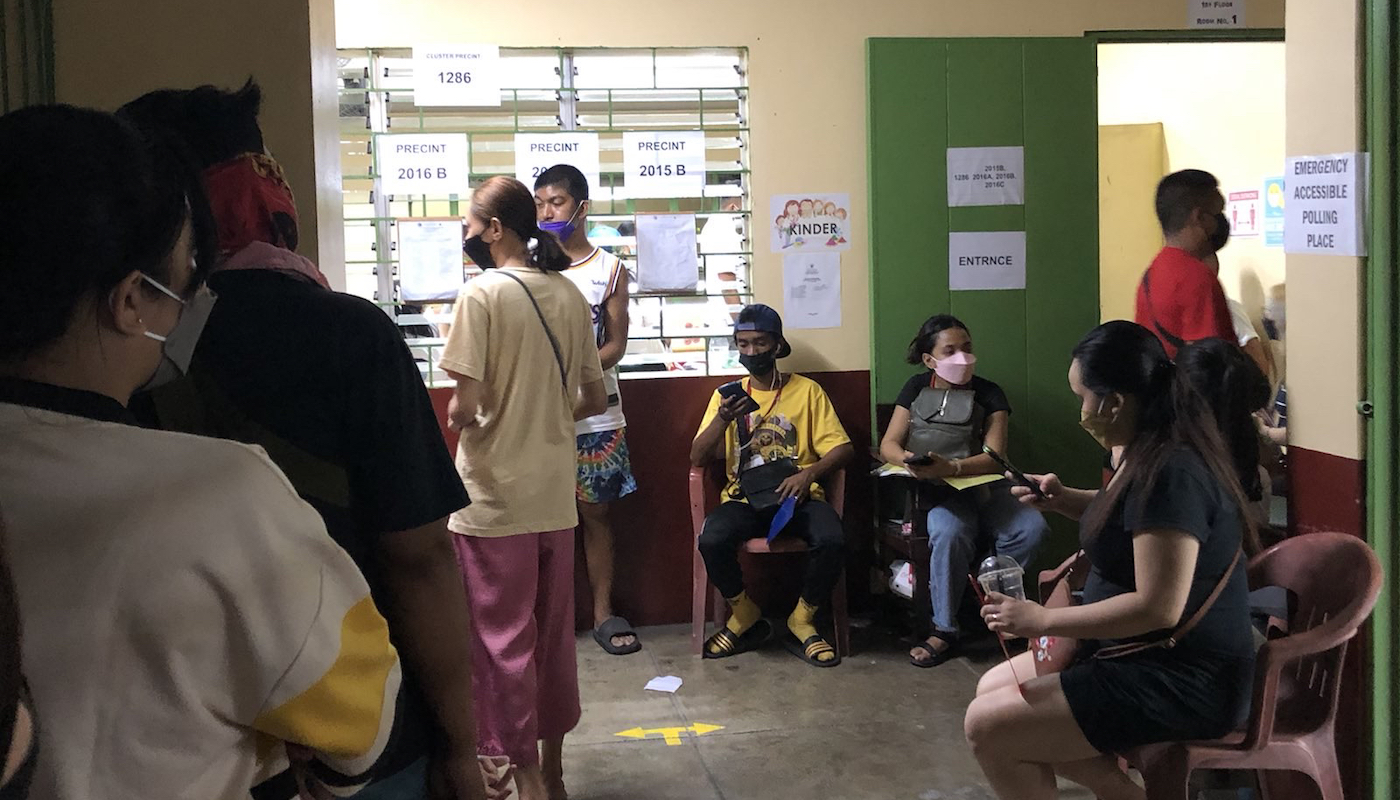 The Omnibus Election Code that governs elections in the Philippines was passed in 1985 or almost four decades ago. It needs urgent updating, according to election watchdogs.

“If there’s one document that could change and further improve the conduct of our electoral processes, it would be the introduction of a new Omnibus Election Code,” Rona Caritos, executive director of the Legal Network for Truthful Elections (Lente), said in a roundtable discussion organized by the Philippine Center for Investigative Journalism (PCIJ) in July.

Congress initiated a new election code in 1993 but Guia said it was not completed “because Congress did not think it was ready to pass a whole code.” Instead, Congress passed piecemeal laws, such as the continuing voter registration and the party-list laws.

Guia said this has resulted in about 40 laws that confuses even election lawyers. “That’s why we have this problem of substitution, filing of certificates of candidacy issues, (and) a weak political party system.”

Caritos said there’s a need to identify individual amendments and revisions if Congress is not prepared to amend the code.

But Guia said not all reforms need to be legislated. “For instance, many of the inefficiencies (in some proposals) are actually administrative issues that can be addressed without a law being proposed,” he said. “You just have to have good people implementing them.”

Here are 10 urgent tasks and reforms that election watchdogs identified, during the PCIJ roundtable discussion, to improve the conduct of the next elections in 2025.

These tasks fall to the 19th Congress and to Comelec chairman George Garcia, who was appointed on August 1.

PPCRV national trustee Arwin Serrano said another postponement would mean pushing back the preparations for the 2025 polls.

Namfrel was the first to issue a call opposing the postponement. “As a level of government closest to the people, each voter should be given regularly and without interruption the right to choose the leaders they see and interact with on a daily basis,” it said in a statement on July 20.

“The barangay serves as the primary planning and implementing unit of government policies, plans, programs, projects, and activities in the community, as a forum wherein the collective view of the people may be expressed, crystallized and considered, and where disputes may be amicably settled,” Namfrel added.

2. Early preparations for next polls

PPCRV’s Serrano said preparations for the next elections should also begin as early as this year.

“We would like to recommend to Comelec that they start early the procurement process, including the formulation of terms of reference (TOR) for the vote counting machines that we’re going to use in 2025,” Serrano said.

Namfrel operations specialist Paolo Maligaya pushed for “a more transparent way of counting votes,” such as a “hybrid system, which would involve manual counting at the polling places and electronic transmission of the results.”

Lockdowns due to the coronavirus pandemic prevented election watchdogs from observing many of Comelec’s activities before the May 2022 elections.

Serrano said Comelec should “revert back to the pre-pandemic process” and uphold transparency. Watchdogs should also be given more access to activities such as the printing of ballots, technical evaluation and hardware acceptance tests of machines, and Comelec training particularly for local coordinators, he said.

Lente’s Caritos proposed the use of technology to make the voter registration process “more inclusive and accessible.”

“What we saw during this pandemic is how unresponsive our voter registration legal framework is. Everything is going online but still… we need to go to our election officer’s office, we need to line up,” she said.

She urged legislators to review the possible integration of the national ID database with Comelec’s voter database. “That would afford us to skip one step in the voter registration process, which is the capture of biometric data,” she said.

There is also a need to review the deactivation of voters if they failed to vote in two consecutive polls, said PPCRV’s Serrano.

Guia, who was elections commissioner for seven years, said there had been proposals to remove the policy in the past.

However, he said Comelec had been “strict” about the registration process so they can “cleanse” the voter list.

The CFO does not have plantilla positions and is forced to re-hire or hire new people to be part of the office, she said.

“We want it to be the same as OFOV or the Office for Overseas Voting. It’s now a permenant office because of the Overseas Voting Act of 2020. That is our hope for the CFO as well,” said Caritos.

The CFO will be more effective if it has permanent employees who are not just lawyers but also accountants and data analysts, she said.

“If we’re talking about low hanging fruits, those are the two offices that we should look at to improve the conduct of our future elections,” Caritos said.

“(This law) was set 30 years ago. ‘Yung piso 30 years ago (no longer has the same value now),” Caritos said. “There is really an urgent need to increase spending limits to make the disclosure of our candidates and political parties more truthful.”

Caritos noted that because of unrealistic limits, candidates and political parties would submit statements of contribution and expenditures (SOCEs) that “are not that truthful.”

Namfrel’s Maligaya said Congress should also revise “the definition of a candidate for purposes of penalizing pre-election campaigning.”

The law should require candidates, political parties, campaign donors, and media entities to include in their campaign finance declarations the advertisements aired before the official campaign period, he said.

Under existing laws, an individual is only considered a candidate at the start of the campaign period. Legally speaking, this means there is no premature campaigning.

The election watchdogs also called for a law to regulate online campaigning. While Comelec required candidates and political parties to report their online accounts in a bid to monitor online campaigns in the 2022 elections, Caritos said this was “not enough.”

She called on legislators to amend Republic Act 9006, or the Fair Election Act, to include online campaigning so Comelec may have some “leeway… to monitor the online spending and campaigning of our candidates.”

There should also be a limit to contributions, Caritos said, especially as the Revised Corporation Code now allows domestic firms to donate to political parties and candidates.

Maligaya said all campaign finance submissions should also be made available online.

Namfrel’s Maligaya said lawmakers should revisit the requirements needed before an investigation on a vote-buying complaint is formally initiated.

He also said that complainants and witnesses should be eligible for the government’s protection program.

“‘Yung nakakaalam na may nangyayaring ganun, natatakot sila for their lives and their families, so if there’s a way they can be protected and without divulging na kailangan silang mag-submit ng affidavit,” he said.

He said law enforcers should also be allowed to act on vote-buying incidents they personally witnessed even without a formal complaint. “The law should include a declaration that such acts on the part of law enforcement officers… is a non-partisan function,” he said.

In May, Comelec said that they were investigating 1,000 cases of vote-buying but most of them did not include evidence or affidavits.

8. Add an anti-political dynasty provision in the Party-list law

Research showed that political families use the party-list system as a backdoor to gain seats in Congress. In February, PCIJ found that at least 70 of the 177 accredited party-list groups had nominees connected to political clans or incumbent officials.

There had long been clamor for an anti-dynasty law but Caritos admitted it’s hard to introduce one that covers all government positions. “So why not introduce an anti-dynasty provision in the Party-list System Act?”

She said the SK Reform law has a provision against political dynasties, which Congress could adapt when they amend the party-list law.

PCIJ training director Rowena Paraan called for the passage of a Freedom of Information law.

“One of the reforms that should happen is the improvement of access to information, not just by journalists but even by ordinary citizens, na gustong malaman what is happening in their (localities),” she said.

During the 2022 electoral campaign, some journalists also had difficulties accessing candidates as they refused to acknowledge questions or join debates.

The House of Representatives passed a measure repealing the provision, but it did not hurdle the Senate.

Caritos said the provision was a “clear conflict of interest” for LGUs. “Hopefully this would be taken up again by our legislators,” Caritos said. END

— PCIJ
Posted in: Elections
In This Series
Latest Stories

The Court of Appeals had ordered the freezing of all the known assets of Andal Ampatuan Sr., his sons Andal Jr. and Zaldy, and 25 other Ampatuan family members on June 6, 2011. The order covered 597 bank accounts, 113 real properties, 142 firearms, and 132 motor vehicles allegedly owned by the Ampatuans. By then, however, Andal Jr. had sold eight real properties.