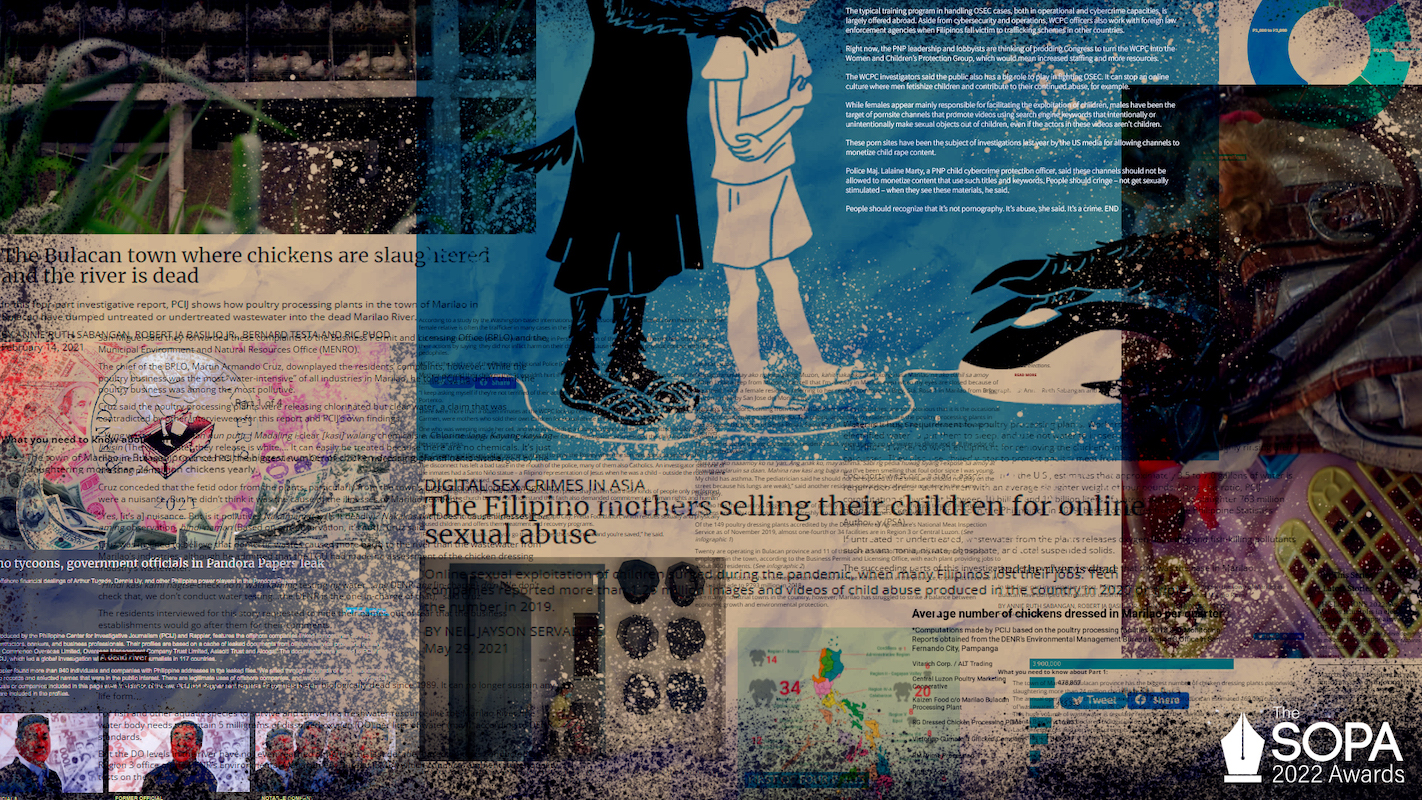 SOPA was founded in Hong Kong in 1982 to acknowledge the best works in journalism in the Asia-Pacific. It announced the winners on YouTube on Thursday, June 16. 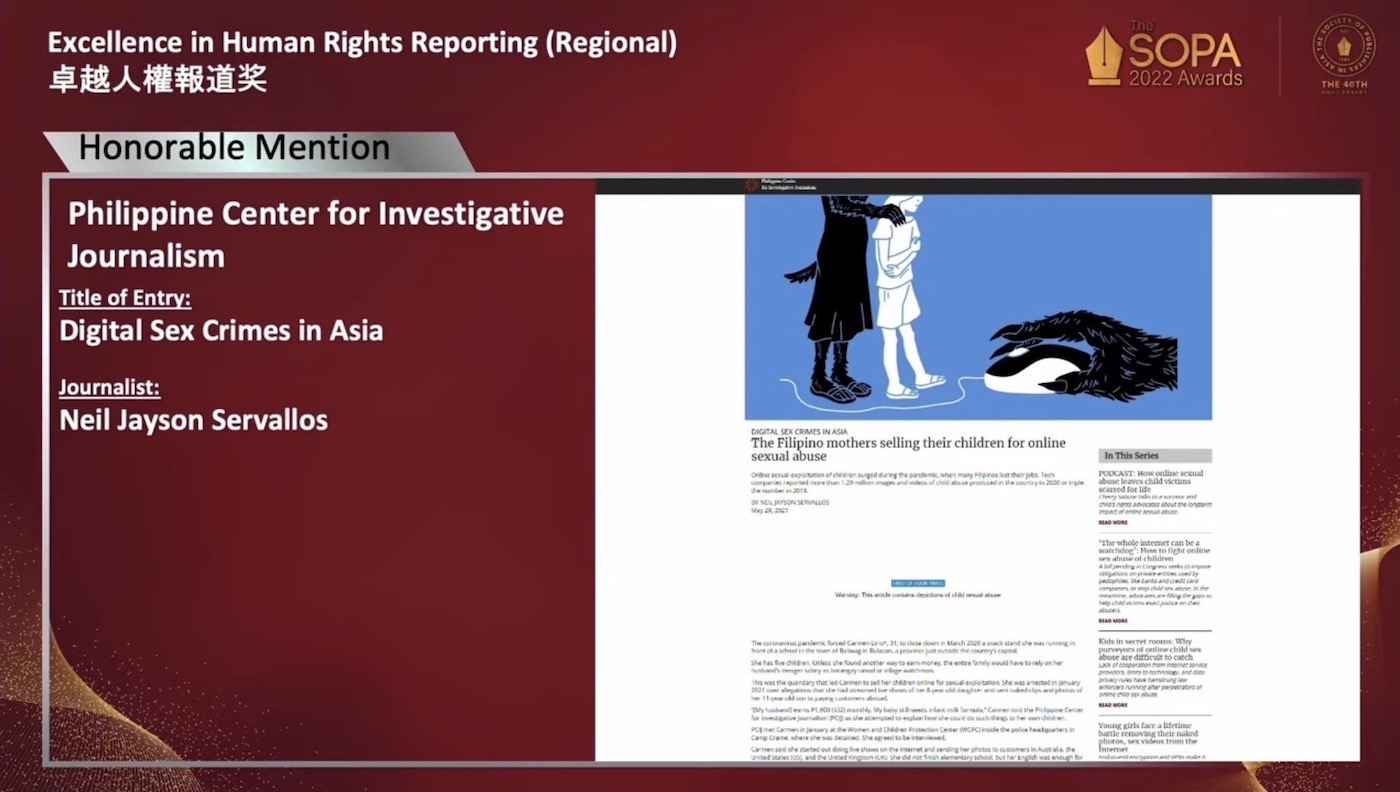 The four-part series “Digital Sex Crimes in Asia” by PCIJ fellow and Philippine Star reporter Neil Jayson Servallos, which explored how the pandemic and poverty exacerbated the sexual exploitation of children online, was an honorable mention for the Excellence in Human Rights Reporting category for regional news outlets. The series of reports was supported by the Judith Nielson Institute, and included a podcast series by PCIJ reporter Cherry Salazar and a television documentary in collaboration with ABS-CBN News.

The judges said the "heart-wrenching stories" in the series highlighted "an issue not widely known: the many who are forced into the digital sex trade amid the economic ravages of Covid-19."

Myanmar Now's Human responses to the junta's cruelty won the top prize or the Award for Excellence. It's three "very personal stories of young people tell individual tales of heroism and tragedy in the face of the military takeover of Myanmar," the judges said. "By focusing on a murdered volunteer medical worker, a student tortured by the army and a young mother who fell to her death rather than be captured by soldiers, the authors have put a real face to Myanmar's despair. Superb journalism." 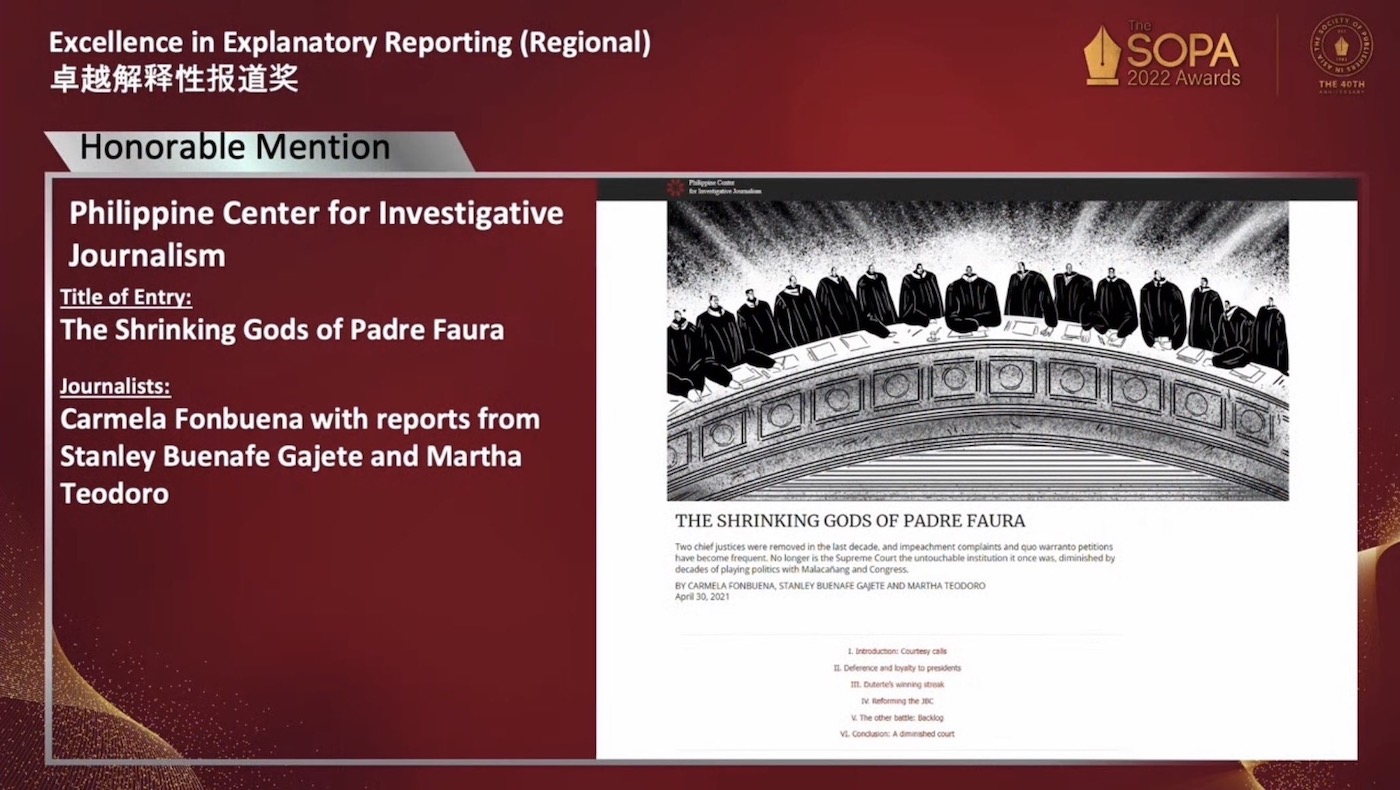 PCIJ’s report on the Supreme Court, “The Shrinking Gods of Padre Faura,” was also recognized as honorable mention in the Excellence in Explanatory Reporting category (Regional). The story — written by PCIJ executive director Carmela Fonbuena, former project manager Stanley Gajete, and researcher Martha Teodoro — discussed how the judiciary, a co-equal branch of government with the executive and legislative, had been losing its insulation from influence due to impeachment complaints and playing politics. It was produced with support from the Court Appointment Watch, of which PCIJ is a member.

The judges said it was "a detailed, insightful dive into the rot that besets one of the most important democratic institutions in the Philippines tells the story of the crisis of democracy in the Philippines. The mixing of the structural weaknesses of the country's judiciary, the historical context of its decay, and its rapid slide in the present time make this a highly readable, informative and important account."

GMA News Online's Boys Don't Cry won the top prize for "describ[ing] in excruciating, powerful detail the reasons for and results of sexual abuse of young boys in the Philippines. The reporting is thorough and the writing masterful. It brings to light a little-discussed, festering problem with sensitivity and courage," the judges said. 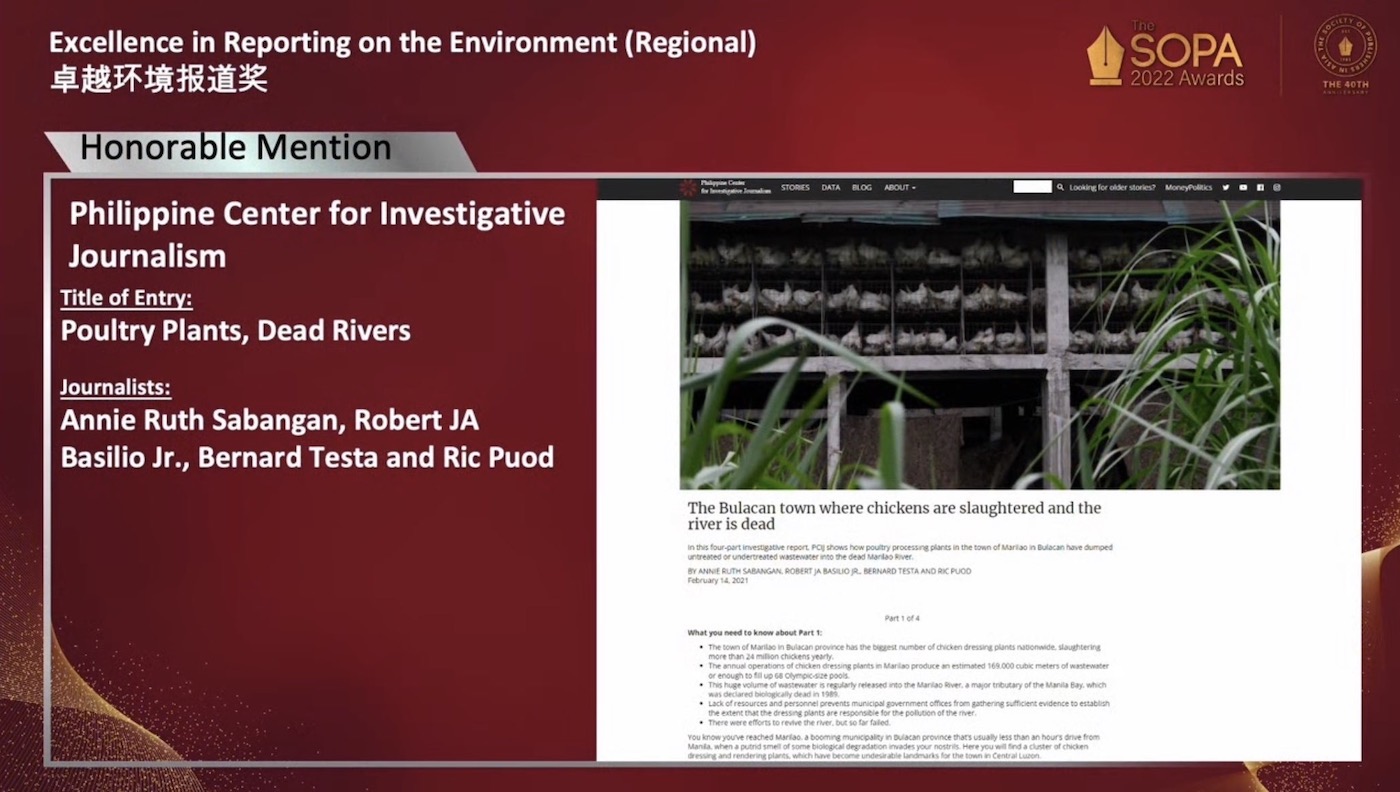 “Poultry Plants, Dead Rivers,” a four-part investigation on how wastewater from chicken dressing plants led to the biological death of a river in Bulacan, also earned an honorable mention in the Excellence in Reporting on the Environment category (Regional). The series was written by PCIJ fellows Annie Ruth Sabangan, Robert JA Basilio Jr., Bernard Testa, and Ric Puod with support from Greenpeace Southeast Asia – Philippines.

The judges noted how the report "includes much important data to illustrate the seemingly impossible task of monitoring and enforcing regulations of wastewater disposal by the factories." It added: "Its vivid description of the heavily polluted Marilao River by the reporters who visited the area leaves the reader with a clear understanding of the tragedy at hand."

The report of The Environmental Reporting Collective, Oceans Inc., won the top prize for its "richly-layered" and "beautifully presented" personal narratives in reporting on the businesses involved. It's "a patient piecing together of the environmental implications, at many different levels. A tour de force," the judges said.

The Pandora Papers, a collaborative project which PCIJ took part in, also won the Carlos Tejada Award for Excellence in Investigative Reporting. The global collaborative project led by the The International Consortium of Investigative Journalists exposed the secret offshore dealings of world leaders and the elite. Other partners include The Washington Post, The Sunday Times of Sri Lanka, and Rappler.

PCIJ reporter Elyssa Lopez found that Transportation Secretary Arthur Tugade did not declare his offshore firm in his Statement of Assets, Liabilities and Net Worth or SALN.

The judges said: "This slice of extraordinary work by a squadron of journalists across different outlets pries open the lid on the covert movement of global wealth, its enabling gatekeepers and the elites who benefit from it. These powerful stories already have yielded prosecution and other forms of restitution or justice in many countries. An amazing milking of an overwhelming number of leaked documents. Especially liked the "Indiana Jones" tale of the art dealer trafficking Khmer art and antiquities to museums around the world. The meticulous work and time spent building these trails of accountability is truly impressive."

In 2021, the prison coverage of PCIJ fellow Aie Balagtas See was awarded Honorable Mention in the Excellence in Human Rights Reporting. The judges said it was a "timely examination of the shocking conditions in overcrowded Philippine jails as Covid-19 spreads."

It added: "This in-depth investigation does a great job putting the spotlight on the abhorrent conditions in the jails and detention centers across the Philippines — they’re increasingly overcrowded, and they’re poorly equipped to protect the detained from the pandemic. In the April story, the reporter presented a clear case on how high the health risks were in the detention centers, and followed up with detailed anecdotes by people in the detention cells. The timeline also made clear how Covid-19 cases rapidly spread in different facilities. Overall a very impressive package."

Meanwhile, PCIJ’s story on deforestation and the supply chain won various recognitions in the US. It was a collaborative project produced with NBC News under the Pulitzer Center’s Rainforest Investigations Network.

The report was also shortlisted in two other awards: