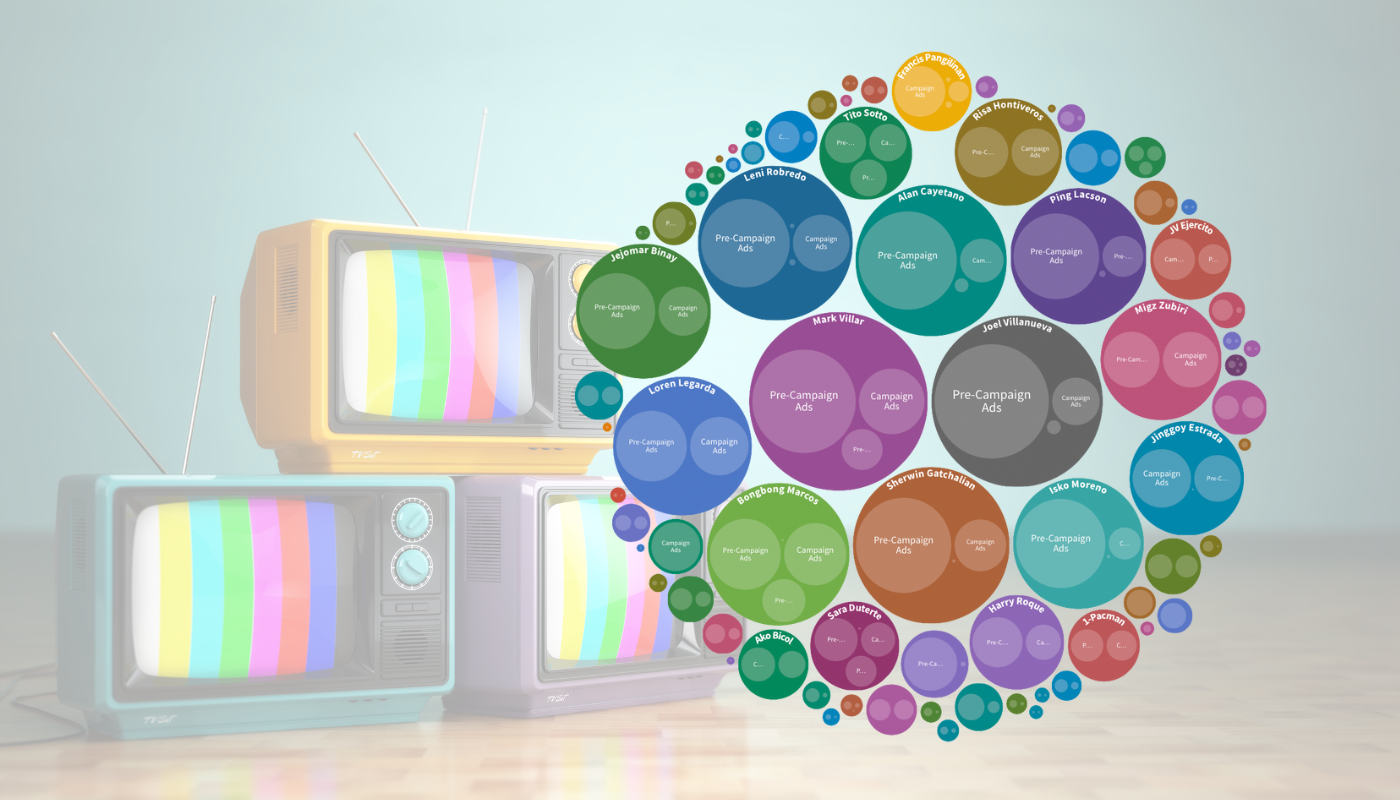 Party-list groups with wealthy and prominent nominees spend most on election ads.

Three party-list groups who claim to represent marginalized and underrepresented sectors aired ads worth hundreds of millions of pesos on advertisements in traditional media from January 1, 2021 to March 30, 2022, data from Nielsen Ad Intel show.

Abono Partylist was the biggest spender. It aired ads worth P377.34 million mostly before the start of the campaign period on Feb. 25 when no limits were imposed yet on ad spending. It slowed down on spending in February and March, recording only P3.08 million worth of ads.

The second biggest spender, 1-Patriotic Coalition of Marginalized Nationals Inc. or 1-Pacman aired ads worth P257.92 million. About half of the ad spots was aired before the campaign period.

Nielsen Ad Intel monitors ad spending of candidates on the TV, radio, print, and billboards. The amounts were based on published rate cards and did not reflect discounts that the candidates might have obtained from broadcast networks or publishers.

Its first nominee, Robert Raymund Estrella, comes from a prominent political clan in Pangasinan. He is the grandson of the late Pangasinan governor Conrado Estrella Jr.

He is eyeing a return to Congress as his brother Conrado Estrella III winds up his third and final term as representative of Abono in the 18th Congress.

In 2015, Abono figured in a controversy when Conrado III and his brother Roberto were accused by the National Bureau of Investigation of allegedly conspiring with Janet Lim Napoles to divert their pork barrel or Priority Development Assistance Program allocations.

1-Pacman’s first nominee and incumbent representative, Michael Odylon “Mikee” Romero, is the richest member of the 18th Congress. He had a net worth of P8.1 billion as of the last publicly available Statement of Assets, Liabilities and Net Worth (SALN) of members of the 18th Congress, filed in December 2018.

In 2020, he was the 46th richest Filipino, according to Forbes Magazine.

Romero is son of construction magnate Reghis Romero II. In 2011, he became chairman and president of GlobalPort Inc., which operated major ports in the country including Manila North Harbour and Harbour Centre. Romero also owns the GlobalPort Batang Pier basketball team in the Philippine Basketball Association.

The group’s second nominee, Enrico Pineda, is a business partner of Sen. Manny Pacquiao. Pineda had a net worth of P93 million as of December 2018. Its third nominee, Marlon Bautista, is Sen. Ramon “Bong” Revilla Jr.’s older brother.

Ako Bicol is represented by Elizalde S. Co, owner of the Sunwest Construction and Development Corporation. He bagged government contracts worth at least P1.32 billion during the pandemic, according to election watchdog group Kontra Daya.

ACT-CIS aired ads worth P122.58 million. It claims to advocate against crime and terrorism. It won two seats in 2013 and was the top vote-getter in 2019, winning three seats.

ACT-CIS is led by first nominee Rep. Eric Go Yap, a known ally of President Rodrigo Duterte. He was one of the congressmen who voted against ABS-CBN’s bid to renew its broadcast franchise.

The group’s second nominee is Jocelyn P. Tulfo, wife of famous broadcaster and senatorial candidate Raffy Tulfo. Its fourth nominee is Raffy’s brother, Erwin, who is also in broadcasting.

Erwin and Raffy’s sister, Wanda Tulfo-Teo, was forced to resign as tourism secretary in 2018 after it was revealed that she allegedly favored her brothers' company, Bitag Media, in an advertising contract worth P60 million. Wanda is also eyeing a congressional seat as the first nominee of the Turismo party-list group.

Experts have criticized how the party-list elections have become a “backdoor” for traditional politicians and political clans to enter Congress.

This, they said, undermines the party-list system meant to provide “proportional representation” in Congress for marginalized and underrepresented sectors.

“The Nielsen data confirms the ‘hijacking’ of the party-list system. Under ordinary circumstances, if you are part of the marginalized and underrepresented, your advertisements will be very minimal and very traditional in the sense that you cannot afford big billboards, TV and radio spots,” said Danilo Arao, journalism professor and convenor of the election watchdog group Kontra Daya, in an interview with PCIJ.

“(These groups) are able to gain more foothold in the campaign because of the awareness of the public by virtue of the advertisements. Actually, the function of 30-second or 60-second ads are not really to dig deeper into the programs and orientation of these groups. It is to create what we call brand awareness,” Arao said.

Arao also said it was also concerning that even party-list groups were engaged in premature campaigning.

“It’s symptomatic of the sky’s-the-limit election spending of politicians. The problem is that as far as the Commission on Elections [is concerned] it does not have jurisdiction over spending before the campaign period. But it still has to call out the big spenders. It should be able to put in check these kinds of spending that are obviously meant [for these groups] to get an unfair advantage,” he added.

PCIJ reached out to Abono and 1-Pacman through SMS and email for comment, but they have not replied as of this writing. END