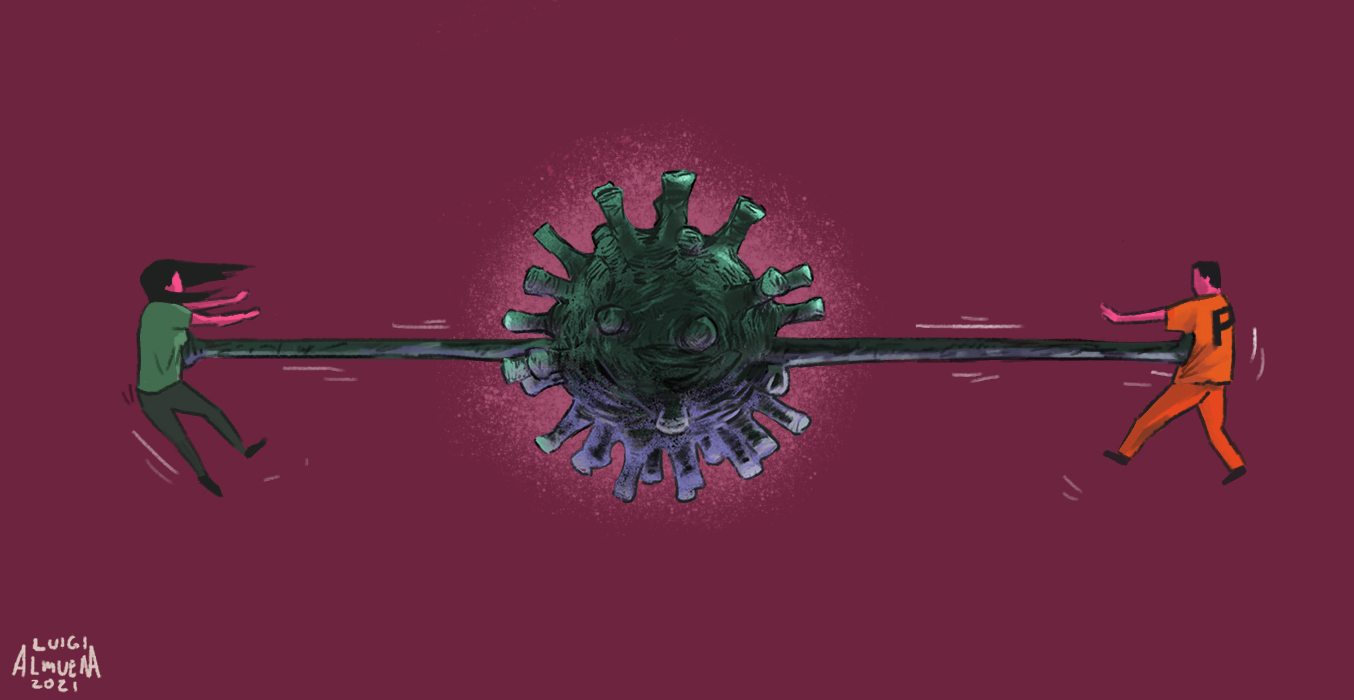 At the height of the coronavirus pandemic in 2020, inmate Mark* of Manila City Jail approached officer Elmar Jacobe to confide about a problem that boys don’t usually talk about.

Mark was broken-hearted. He lost his wife, not to Covid-19, but to another insidious disease. Cheating.

“Tumambling ’yung asawa…. She fell in love with another man,” Jacobe, the jail officer, narrated to the Philippine Center for Investigative Journalism (PCIJ) in a phone interview. Tumbling is the jail’s term for cheating, a common misfortune among inmates separated from their partners.

Mark is incarcerated while undergoing trial for a drug case. When the ban on in-person visits was imposed to curb the spread of Covid-19, he and his wife kept in touch through video calls.

Technology could not keep the flame alive, however. Mark was devastated to learn that his wife had “tumbled” toward another man.

When Mark approached jail officer Jacobe, he desperately wanted to know how one could deal with a family that had just fallen apart.

“They thought the policy would only last for a week,” Jacobe said, referring to the persons deprived of liberty (PDLs).

It has been more than a year since the ban took effect on March 14, 2020 or days before Metro Manila was placed under a total lockdown. It was seen as one of the most controversial steps taken to insulate the inmates from the rampage of the virus.

The PDLs were forced to rely on phone and video calls to keep the emotional bond with their families. Some were able to hold it together. Others, like Mark’s, fell apart.

Jacobe said he had seen at least 10 men cry during video calls because their partners broke up with them.

The Bureau of Jail Management and Penology (BJMP) has been trying to help the inmates cope with isolation and has been “doing its best to address the situation,” said Tessie Gomez, executive director of Prisoners’ Enhancement and Support Organization Inc. or PRESO.

But the pandemic has exacerbated cases of depression and loneliness.

“I know of an inmate who got so depressed that he went on a hunger strike… He just died,” said Gomez.

“Nothing could replace human touch…. I could imagine how desperate the elderly and the sick are right now,” she said.

The pandemic did not only stop family visits. It also prevented advocates, church groups, schools, and nongovernment organizations from visiting the inmates.

These visits, which provided educational and entertainment value to the PDLs, were stolen away by the pandemic, too. 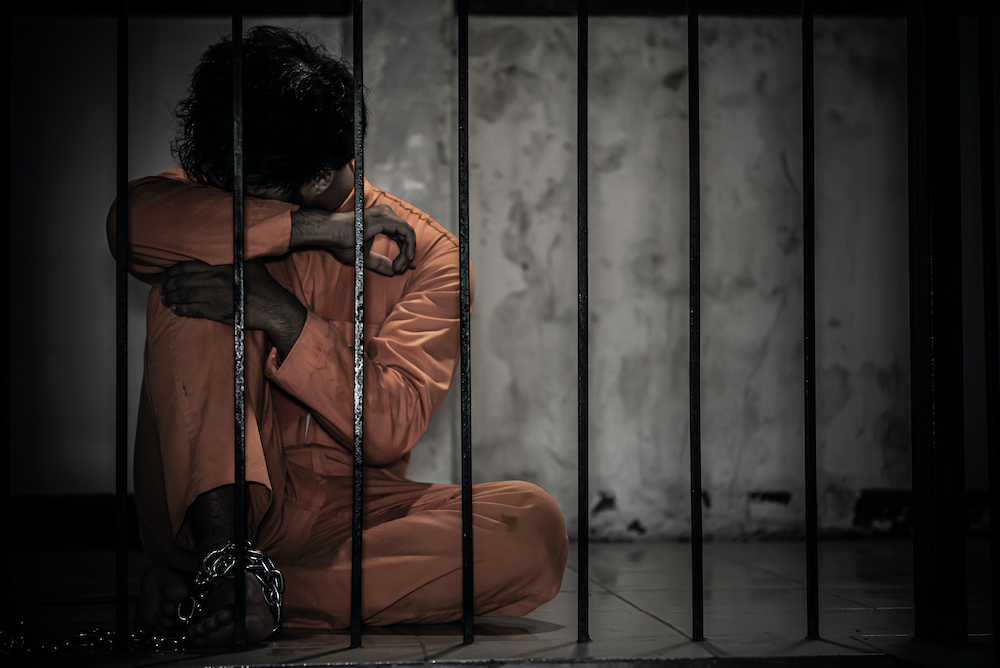 INDEFINITE BAN. It has been more than a year since the ban on in-person visits took effect on March 14, 2020. SHUTTERSTOCK PHOTO

Before the pandemic, it was unthinkable to cancel visits, especially in-person family visits. It is a right held dearest by the PDLs.

“Family visits are a priority for the persons deprived of liberty [PDLs]. They can stomach unsavory food in jails as long as they can look forward to these visits,” Gomez told the PCIJ.

Jacobe said cancelling visitation was considered the gravest punishment meted only to inmates who had committed extreme violations. Any attempt to suspend it for the whole jail would only lead to riots and noise barrages.

What allowed inmates to accept the current situation was the awareness that jails and prisons are highly vulnerable to the spread of disease, said Raymund Narag, an associate professor at the Southern Illinois University Carbondale’s Department of Criminology and Criminal Justice. A former detainee himself, he is a staunch advocate of reforms in Philippine jails and prisons.

The PDLs also saw how jail officers shared the sacrifice, Narag said. He was referring to the decision of BJMP to assign jail officers, like Jacobe, to stay inside the compounds until the pandemic is over.

Jacobe had been “locked up” inside Manila City Jail since March 20, 2020. Like the inmates he has been guarding, Jacobe’s only means to get in touch with his relatives in the provinces are through phone and video calls.

Narag said this policy was unique to the Filipinos. Jail guards from other countries have yet to embrace such a radical initiative in order to slow the spread of virus within their walls and save lives, he said.

Still, Covid-19 penetrated the country’s detention centers. Many suspicious deaths were reported in city jails, the New Bilibid Prison and the Correctional Institute for Women.

Strict measures helped contain the coronavirus, said Gomez. The ban on in-person visits, in particular, prevented the virus from taking over prisons and jails, she said.

“During meetings, people used the words time bomb to raise awareness about our jail situation. The [PCIJ] story served as a warning to them,” said Narag, referring to PCIJ’s coverage of the situation of jails in 2020 as the pandemic hit the country. (READ: Philippine jails are a Covid-19 time bomb)

Jacobe said the PDLs understood the situation. “They, too, do not want to die. And choosing to give up visitation rights was a sacrifice on their part not only for the fellow inmates but also for their families,” Jacobe said.

Some of them, like Mark, didn’t realize what it would cost them, however.

The BJMP, which is tasked to oversee the city jails, and the Bureau of Corrections, which handles state prisons, maximized the e-Dalaw system to keep PDLs connected to the outside world.

It’s a system that has been in place for years but demand for it intensified because of the pandemic. Prison advocates like the International Committee of the Red Cross (ICRC) donated gadgets to city jails.

Allison Lopez, Philippine spokesperson of the ICRC, said at least 31 jails have benefited from ICRC’s program, which distributed tablets with internet load. The gadgets did not only connect PDLs with their loved ones. The BJMP also used them for court hearings, medical consultations, and drug dependency evaluations.

Bustanera said some detainees, had failed to communicate with their families for years because distance and lack of money. With e-Dalaw, family ties strengthened because of frequent online chats, he said.

“Now, they are in constant communication with each other,” Bustanera said.

Inmates who did not receive any in-person visitors in the past have since reconnected with their relatives because online calls have become more convenient.

The lack of connection to the outside world induces boredom or buryong, Jacobe said.

To prevent inmates from having idle minds, the city jail intensified online appointments with psychologists and ensured that jail officers checked on the mental state of PDLs regularly.

“The PDLs are also very cooperative with our programs now. You can see that they are avoiding the ‘buryong’ trap,” Jacobe said.

PDLs also encourage each other to dance Zumba with Jacobe every afternoon.

If anything, the policy became an “equalizer” for all inmates. “They now think pantay-pantay sila (they were all equal). Because now, all of them cannot receive visitors at all,” Gomez said.

The idea of pantay-pantay, however, only applies to physical visits. The class divide is still very much alive in terms of the length and frequency of video calls.

Lyn Mangrobang, 49, and her incarcerated husband are trying hard to make their relationship work. She wanted to call him every day, but the cost of phone calls was too steep.

When she is able to call her husband, their conversation is short.  “It’s just hi-hello and how are you,” Mangrobang said.

Their longest call lasted for 15 minutes. The shortest was 10 seconds. They speak to each other twice a month. That’s how their relationship survived the pandemic.

Her husband has been in jail for two decades, currently locked up at NBPs medium security compound. Before the pandemic, family visits were frequent.

Mangrobang finds herself crying most nights these days. Her husband cries during their phone calls, too.

None of the prison advocates nor jail officers interviewed for this story see Philippine jails or prisons opening up soon. Jacobe and Bustanera said the ban on in-person visits might continue for another year.

Narag said the government should recognize PDLs and jail guards as a high-risk sector. “We should start vaccination in jails soon,” he said.

The supply of shots is low and the  Philippines has one of the worst vaccination rates in the region, however.

— PCIJ
Posted in: prisons
In This Series
Latest Stories

In Iloilo City, hundreds of people were forced into prostitution despite health and safety risks amid the pandemic.

4 years after the Marawi battles — in pictures

The rehabilitation of 9 sectors inside Marawi's city center, areas most affected by the battles in 2017, shows uneven progress as deadline looms.

For two mothers, justice harder to reach amid pandemic

Two mothers share how it feels to be prisoners of misery. On top of the uncertainties brought by the Covid-19 pandemic, Marites Asis agonizes over how the justice system has treated her daughter and her late granddaughter, baby River, while Barbara Ruth Angeles has to endure the loss of a daughter to sickness while seeking justice for her son, who’s been in jail for months.