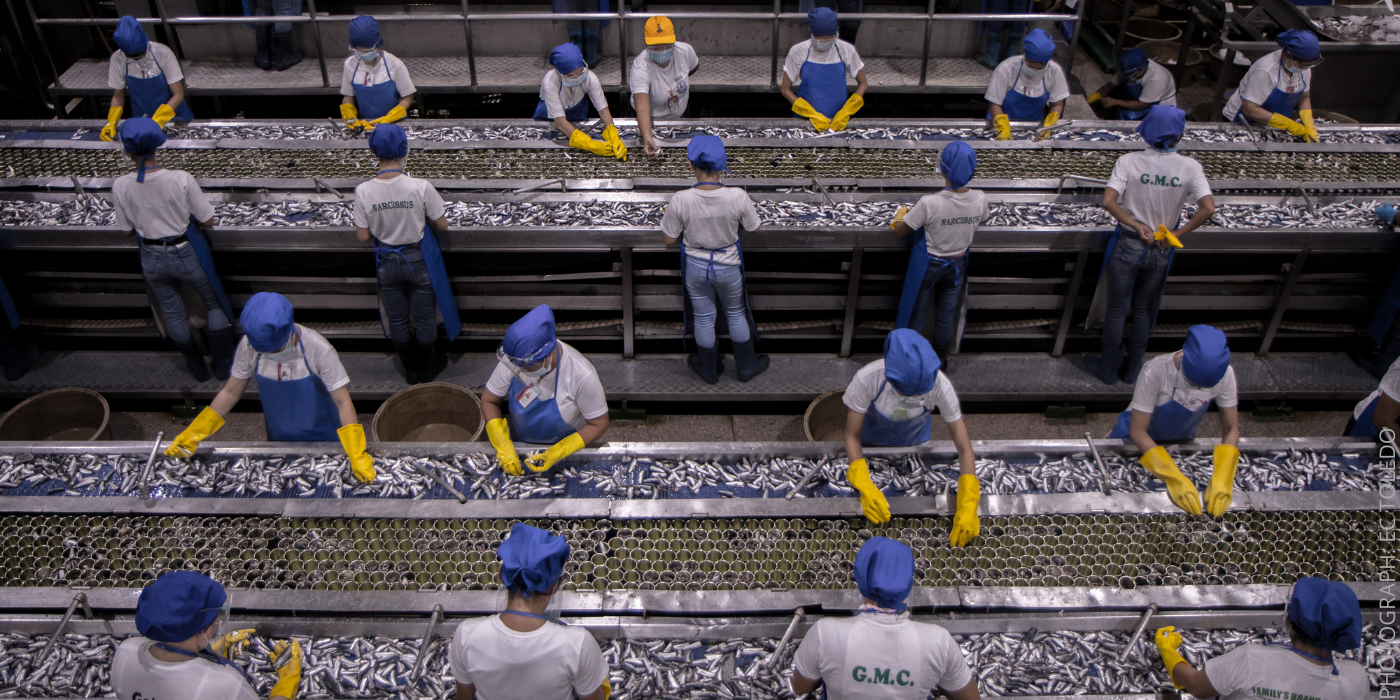 From Sea to Shelf: What Happens Before a Can of Sardines is Sealed — a photo essay

In many households affected by strict lockdowns, canned sardines have become standard fare, as they are affordable and easy to prepare. In this photo essay, EC Toledo tells the story of how sardines come all the way from the sea, to the supermarket shelves, and to your dinner plates.

Susan Melindo, 50, considers herself fortunate to have some side jobs, which allows her to provide food for her family amid the Covid-19 pandemic. Susan, her son, and her partner barely fit in their small house in Manila. Her partner is a tricycle driver whose income was greatly affected by the pandemic.

A Social Weather Stations survey released in September 2020 found that almost one-third of Filipino families or 7.6 million households did not have enough food to eat at least once as the pandemic raged during the third quarter of last year. More than two million families also reported experiencing "severe hunger."

Ayuda or financial aid from friends, family or the government became literal lifelines for many as the Philippines recorded the highest number of people going hungry since 2009.

With incomes declining and basic necessities becoming out of reach, families like Susan’s have increasingly resorted to something affordable and easy to prepare – canned sardines.

Easy to store and with a long shelf life, canned sardines can be found almost anywhere, from sari-sari or neighborhood variety stores to supermarkets. They’re also in food packs given by the government during strict lockdowns.

Canned sardines may be simple fare, but the story of how they are made is a complex one.

Boat crews travel long hours to fishing grounds and work non-stop in the darkest hours of the night to get a good catch. Cannery workers carry and load tons of wet and smelly sardines and stand for hours to process and can the fish so people can have a quick meal.

This is the story of how sardines come all the way from the sea, to the supermarket shelves, and to your dinner plates. 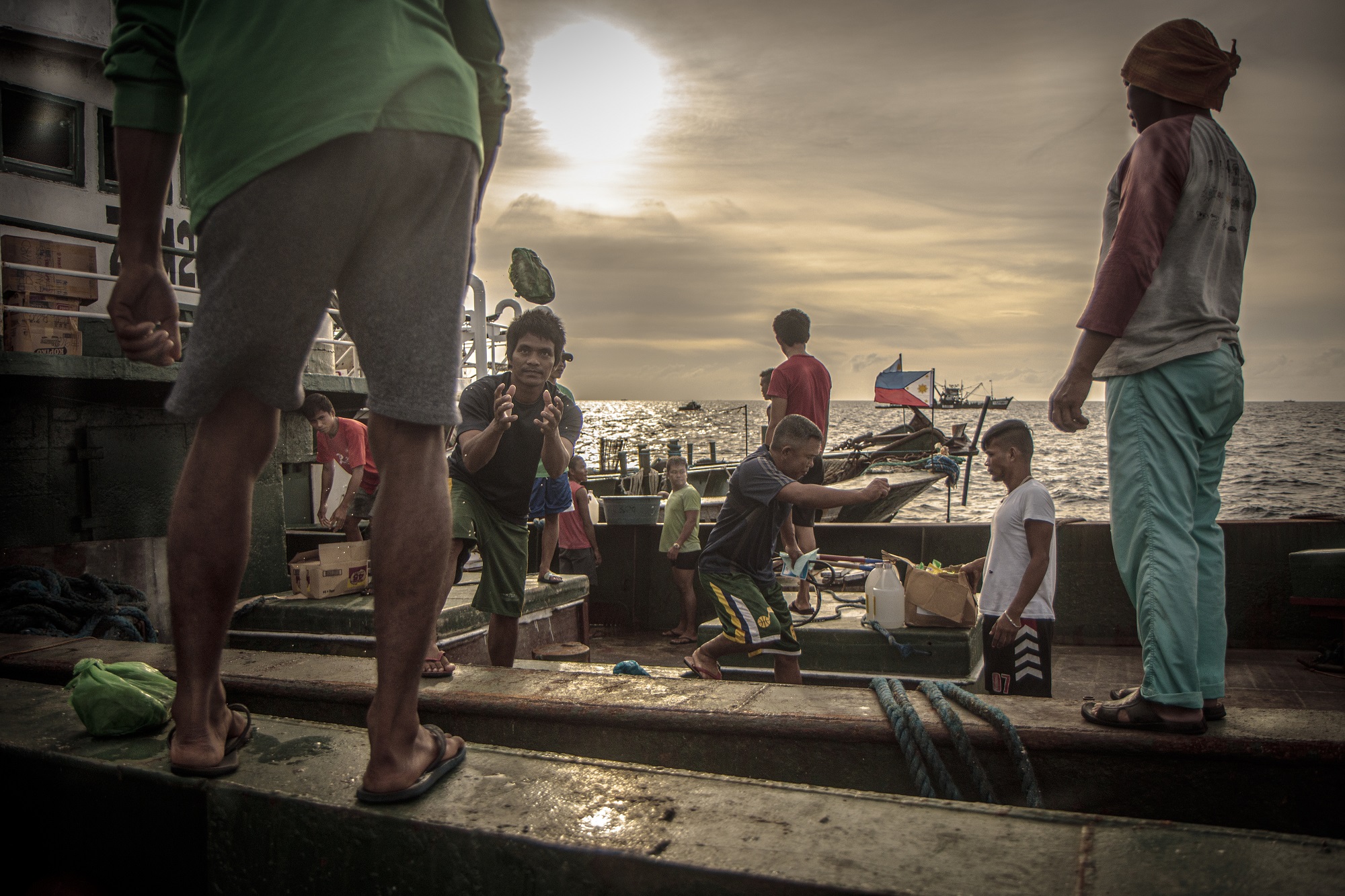 A fishing vessel goes side by side with another ship to transfer and trade supplies. Some fishermen stay at sea for weeks at a time to trade with those coming from the port. 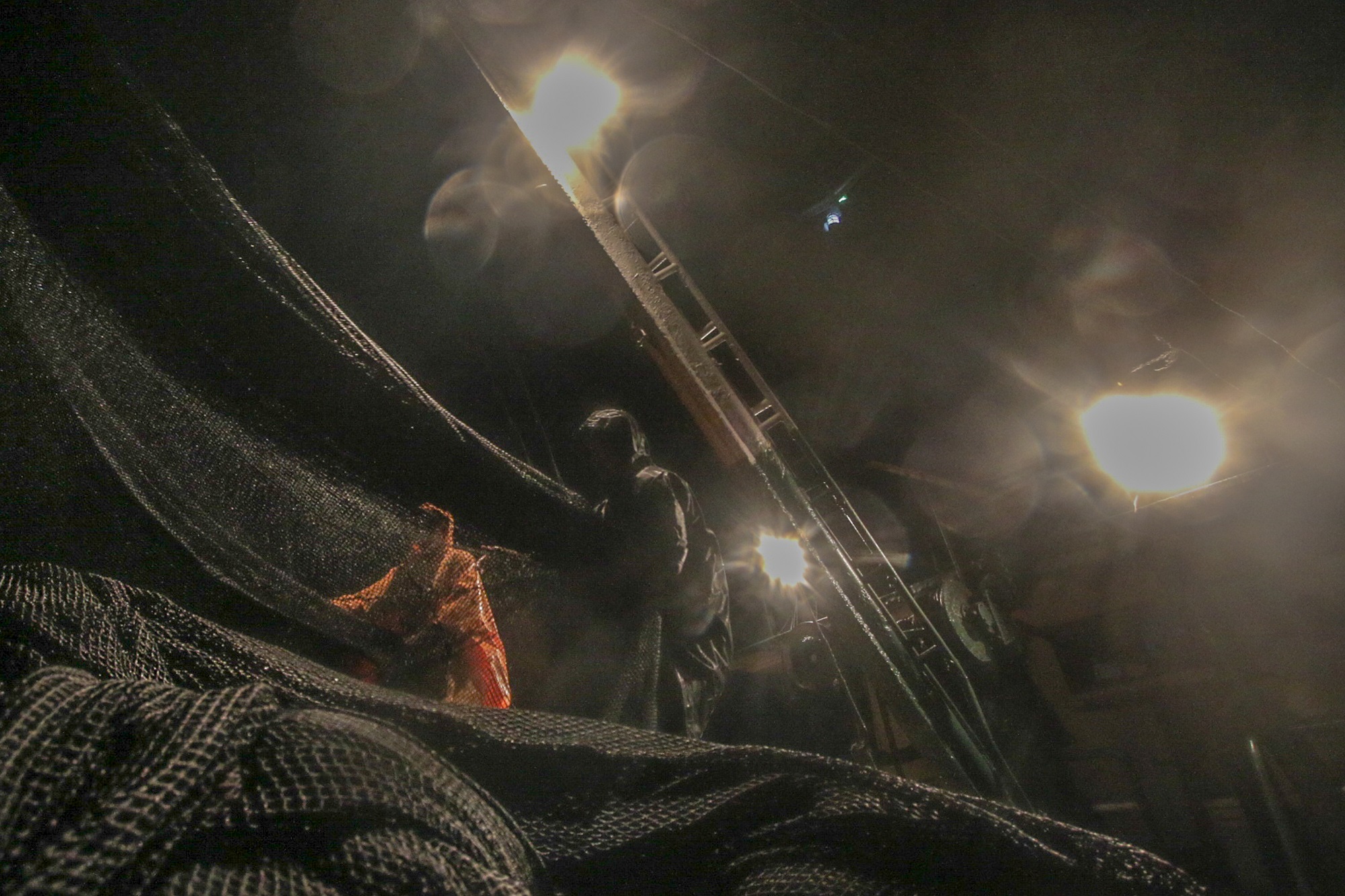 Two fishermen are seen hauling a huge net capable of catching 60 tons of fish at a time. The catcher vessel takes around 2-3 hours to fill up the net. 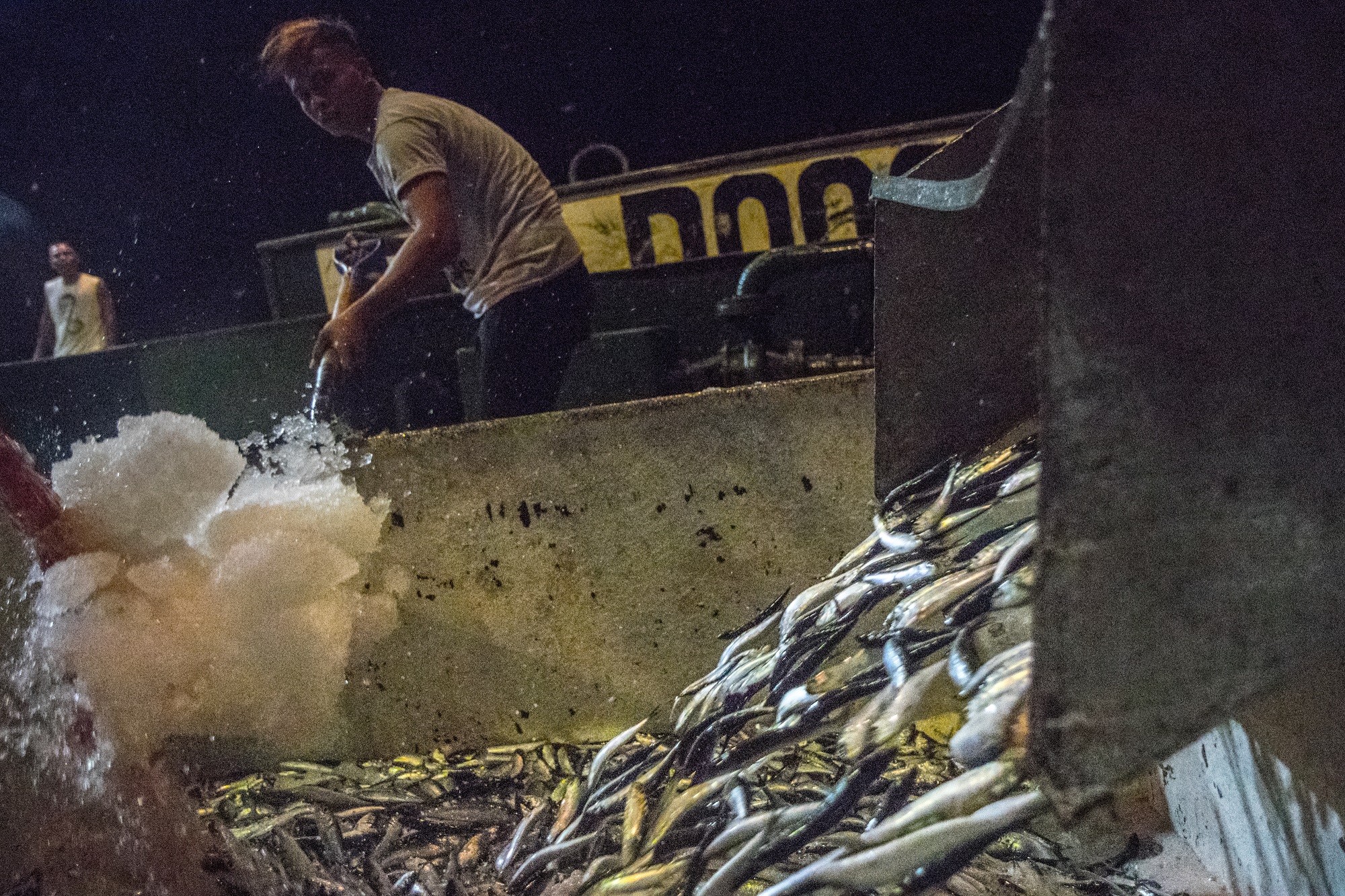 A worker is seen filling containers with ice to keep the sardines fresh. After a catcher vessel has filled its net, it transfers the fish to a carrier. 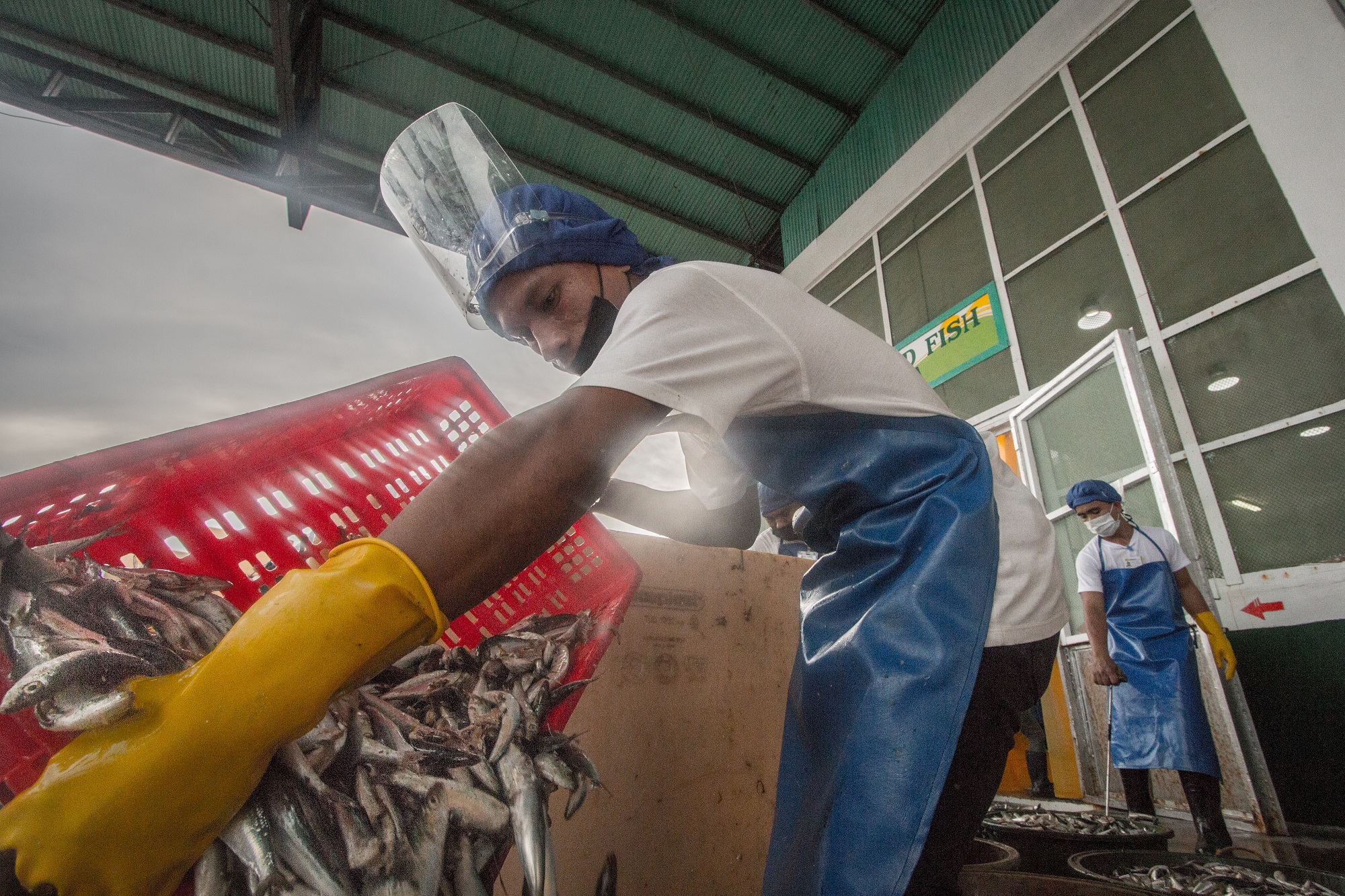 After being loaded with fish, the carrier travels for eight hours back to the port. The sardines are then brought to a processing and canning facility. 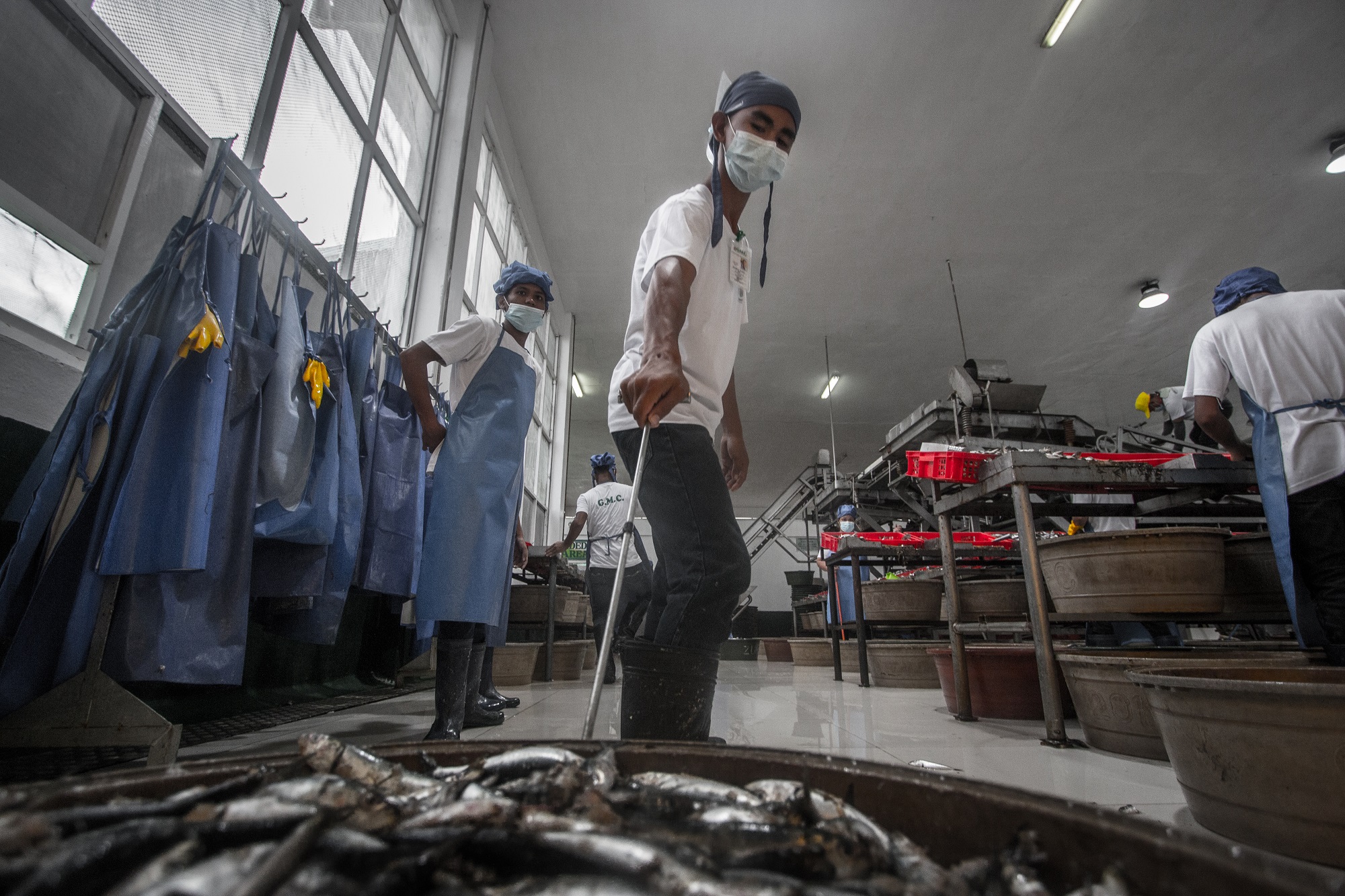 After arriving at the port, the sardines are processed immediately in preparation for canning. 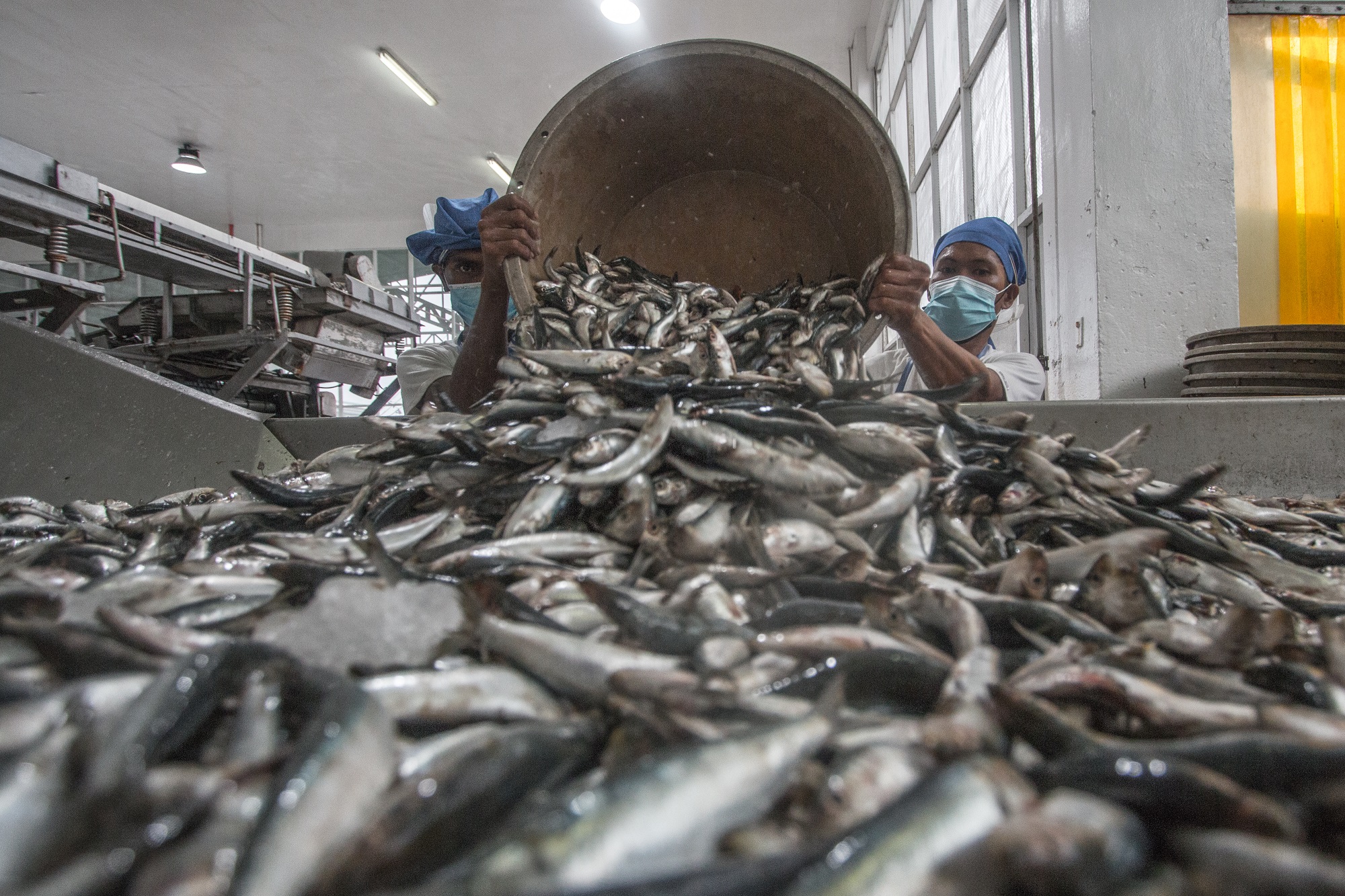 The process of cutting, cleaning, cooking, and canning  the fish takes some 45 minutes. 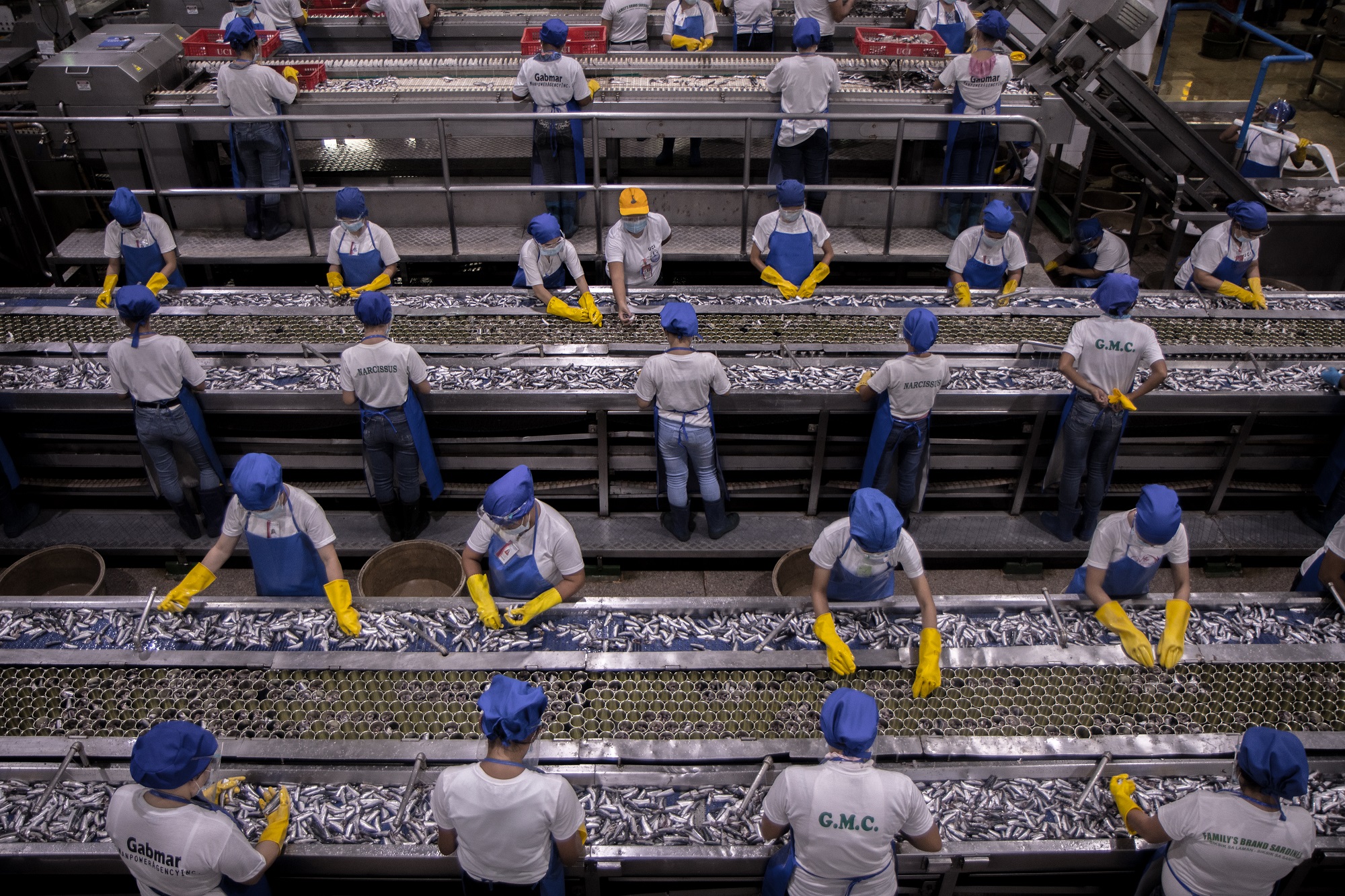 About 1,250 workers are involved in the canning process. The workers, mostly outsourced from an agency, are divided into two shifts. 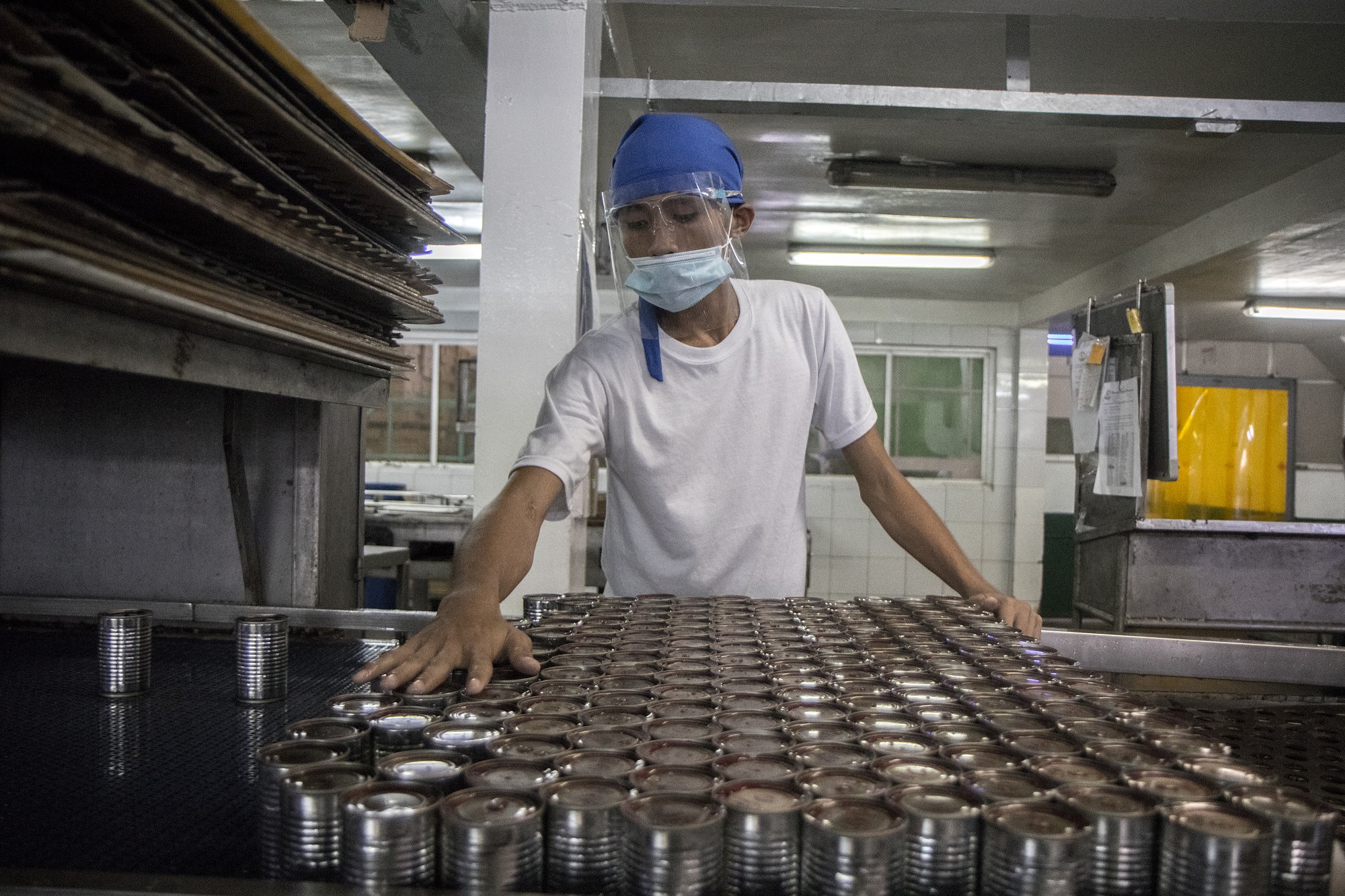 A worker sorts the cans and does a final check for leaks. After a can is sealed, the last step is to put labels on the can. 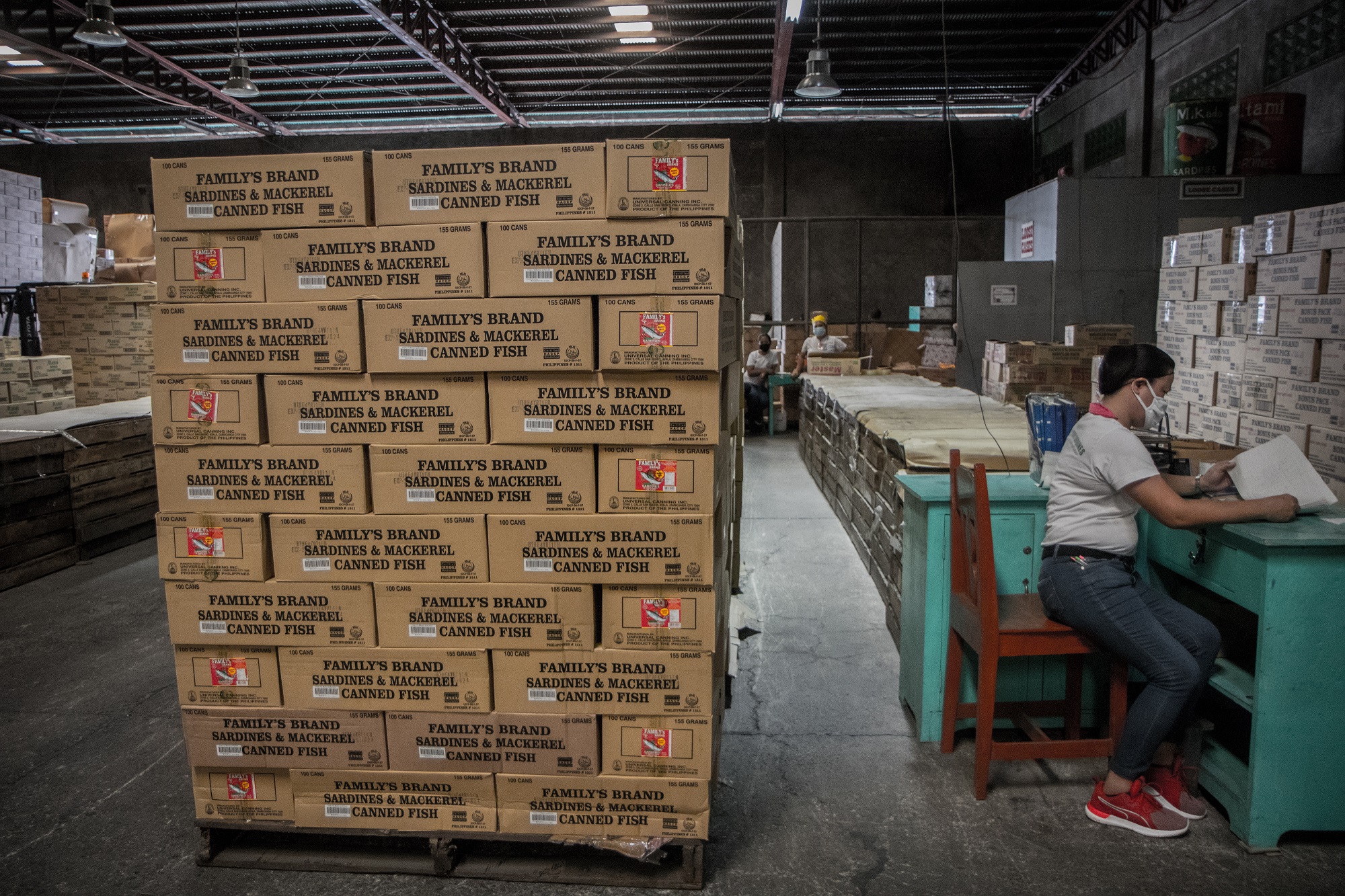 From sea to shelf, the canning facility is able to produce 8,000 cans of sardines per day, to be distributed across the country. 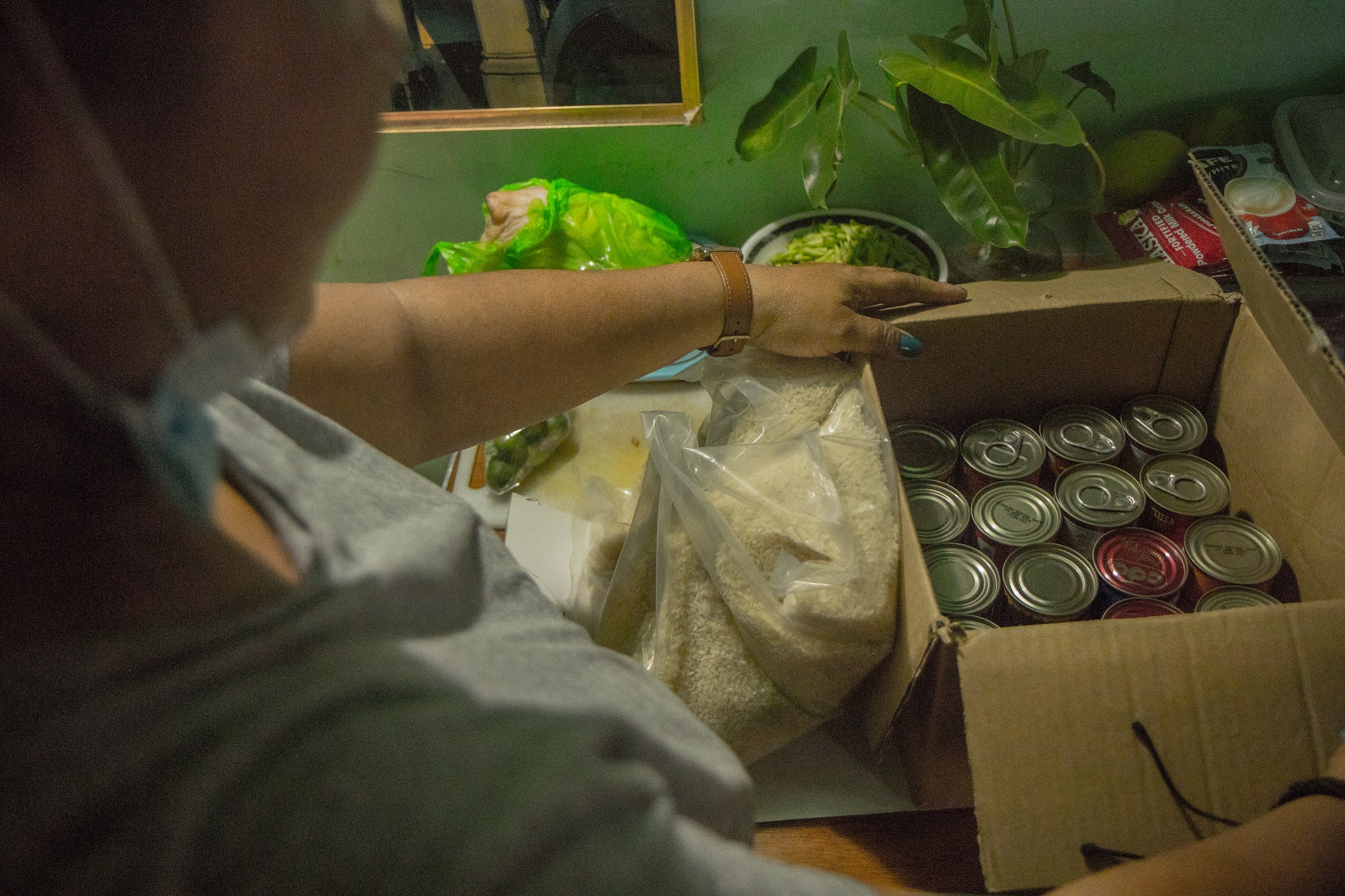 Back in Manila, Susan Melindo, 50, opens a food pack from the local government. The food pack contains 18 assorted canned foods and 3 kilograms of rice. They receive one pack at least once a month. 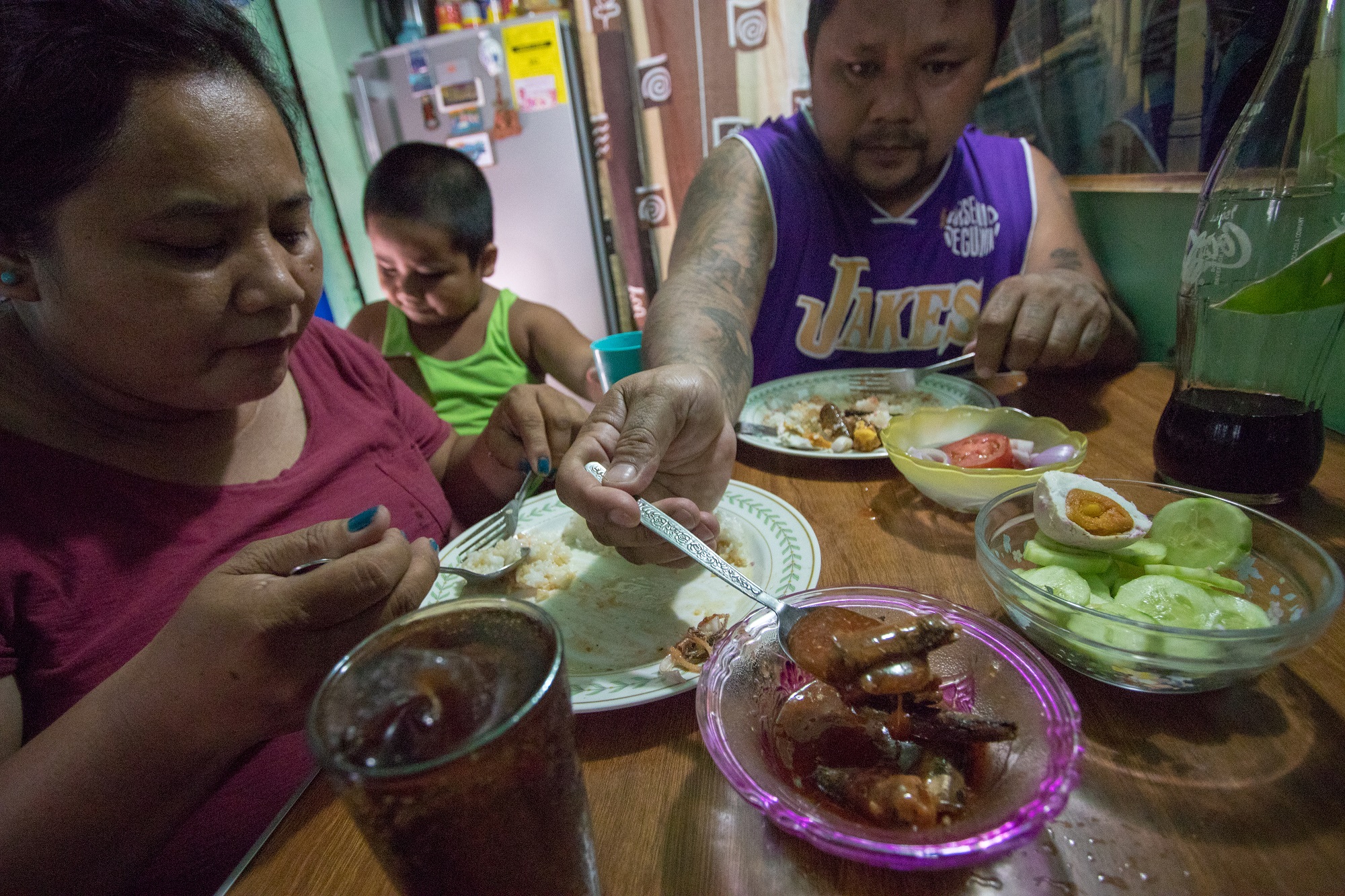 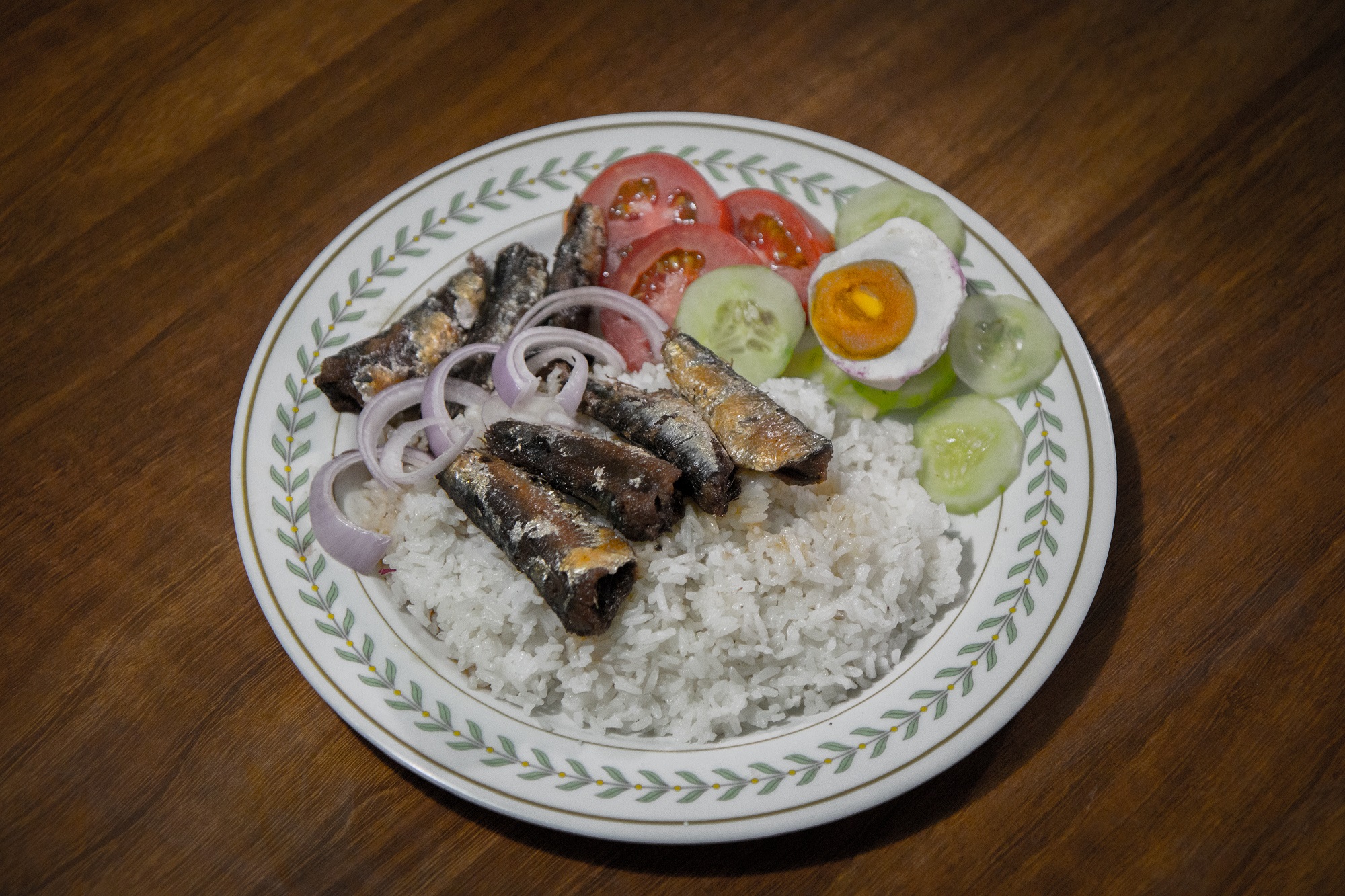 A family relies on food packs that will only last for a week. Metro Manila and other nearby provinces were put under the strictest lockdown for the second time two months ago, affecting the economy and families’ livelihoods.