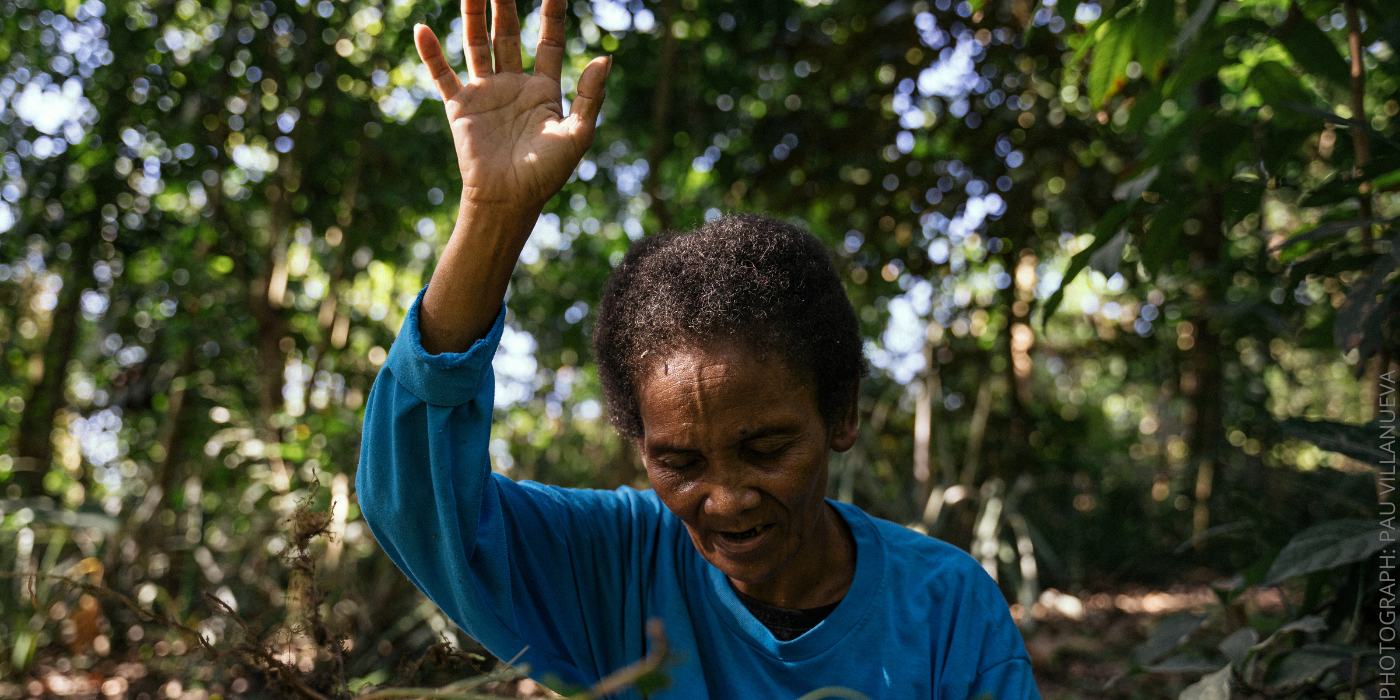 Indigenous peoples have long been considered guardians of global biodiversity, who have accumulated intimate knowledge of the ecosystems in which they live. Villanueva’s photo essay shows how development aggression not only threatens indigenous culture that is deeply rooted in land, but also the extinction of an entire heritage, in the context of the Aetas in Capas, Tarlac.

Nature and biodiversity are more than just sources of food, water, energy, and raw materials for the Aeta communities of Capas, Tarlac. Their cultural identity, well-being, and spiritual traditions are grounded on their regard for the living world. Among Philippine indigenous groups, the Aetas are known for their extensive knowledge of herbs and indigenous healing methods.

Spirituality is a way for them to honor their worldview, which was adopted by their ancestors who had lived in the Luzon mountain ranges long before Spanish colonization. Aeta healers, locally called “mang-aanito,” are sought after. Considered custodians of ancestral knowledge and philosophies, these community elders are keen on preserving their indigenous ecologies.

One of the local healers in Sitio Binyayan, Nida Cautibar, recalls how her calling began. “When I was sick with typhus, my Aeta neighbors took care of me and eventually taught me how to use herbal medicine,” says Nida. “Being entrusted with this knowledge, it has now become my responsibility to heal the sick without asking for compensation,” she adds. Aeta healers believe their mission is to share their healing experiences as a means of keeping society together rather than as a means of acquiring wealth. Healing, for them, is also a way to give back to the Aeta and the non-Aeta communities.

But the multi-billion New Clark City development project in Capas, Tarlac is threatening the indigenous ecology and continues its relentless path without free, prior and informed consent from the Aetas who live there. According to the website of the Bases Conversion and Development Authority (BCDA), the project’s implementing agency, New Clark City is designed to be “wrapped around magnificent views of the hills.” The change in landscape – from flora and fauna to roads and infrastructure – is rendering irreversible damage to the natural world that is the Aetas’ only source of information, passed on from one generation to another through oral tradition.

“We used to roam the forests freely but now, we are scared. We are restricted in our own lands,” says Rosette David, an Aeta healer who has been living in Sitio Bagingan for more than 28 years. “Nature is vanishing as roads are being paved.”

The world over, indigenous peoples have long been considered guardians of global biodiversity, as they have accumulated intimate knowledge of the ecosystems in which they live. Development aggression not only threatens indigenous culture that is deeply rooted in land, but also the extinction of an entire heritage. 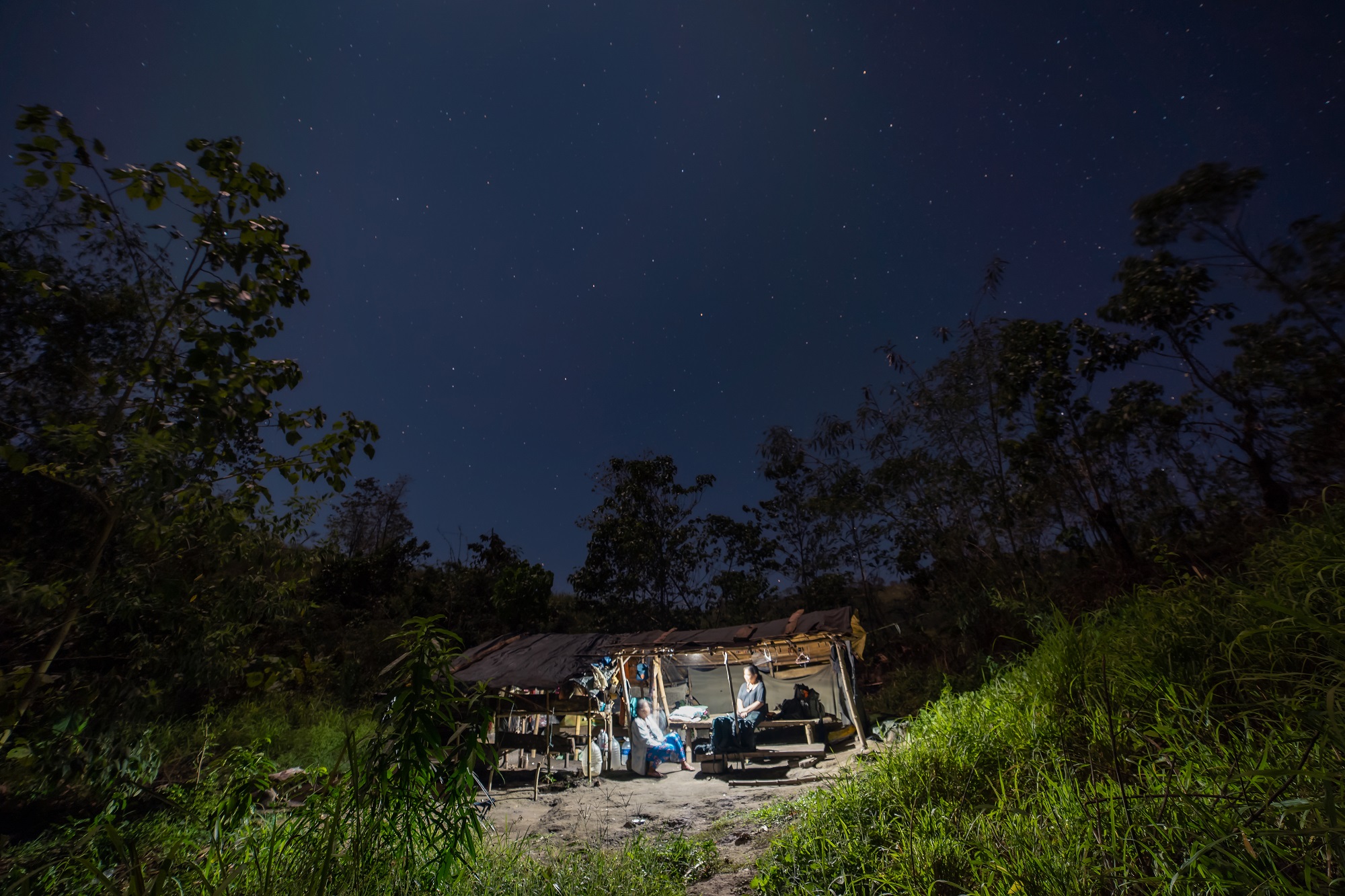 A small native hut in Sitio Alli where an Aeta family lives is situated near one of the construction sites of New Clark City in Capas, Tarlac. The Aeta residents find it difficult to sleep whenever construction goes into the night. 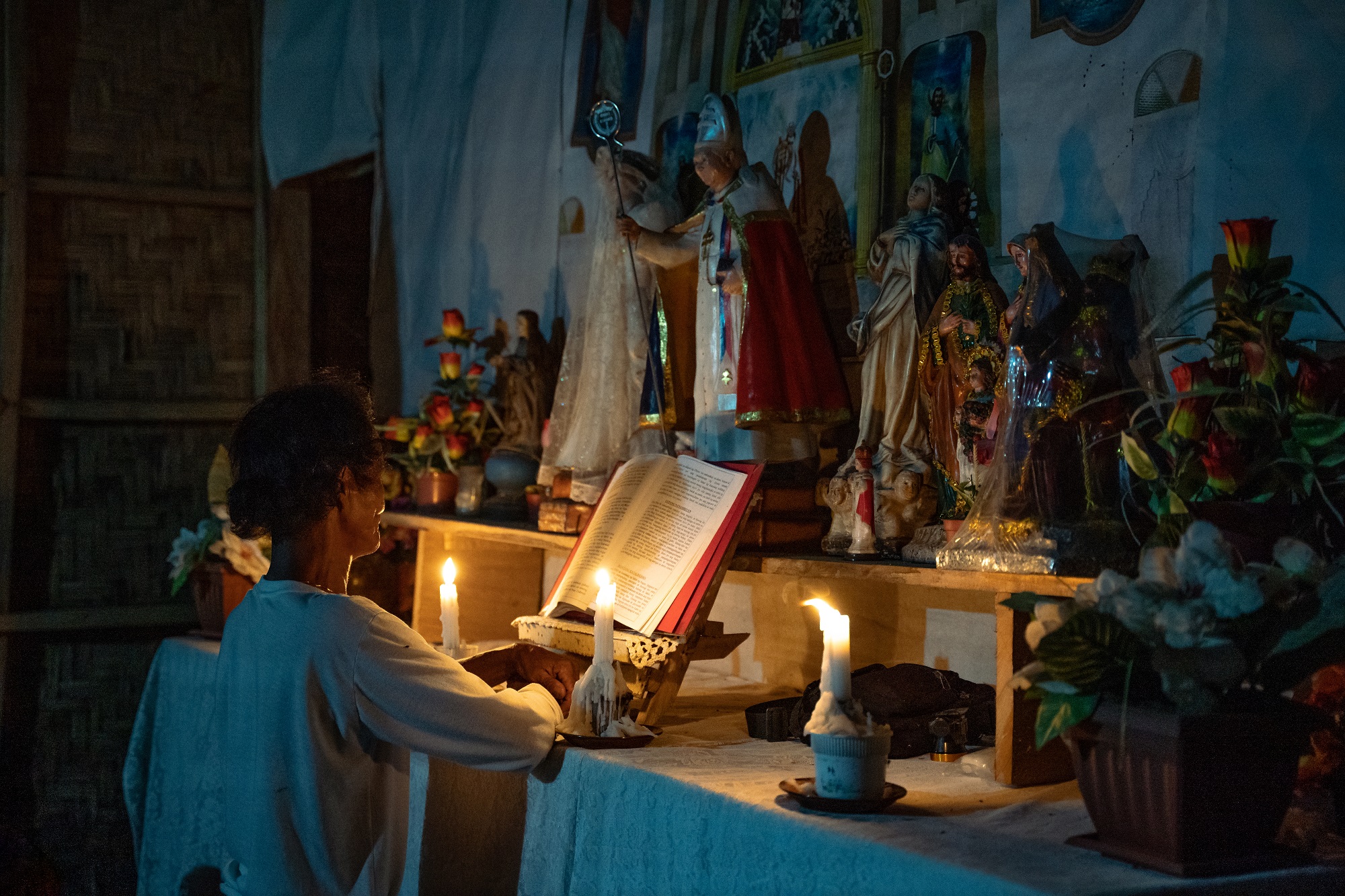 An Aeta devotee of the Crusaders of the Divine Church of Christ in Sitio Kawayan kneels before the chapel’s altar to pray. Other religious orders and benevolent groups are recognized by Aeta communities in Capas, Tarlac. Even within these denominations, Aetas still practice spiritual beliefs instilled on them by their ancestors. 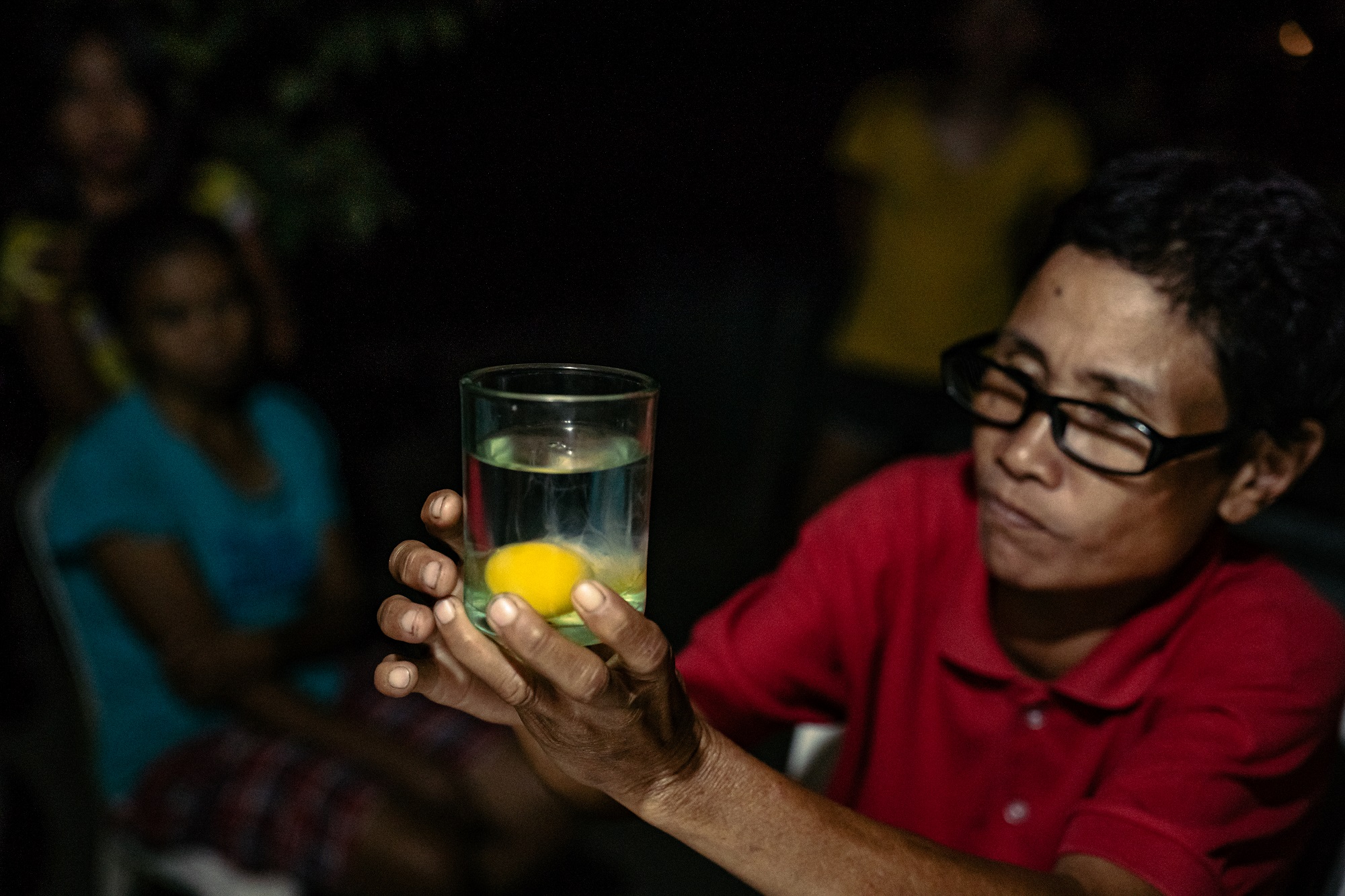 Nida Cautidar, a local healer from Sitio Kalangitan, performs a diagnostic ritual by cracking a raw egg into a glass of water to be examined for any change in shape that might suggest the nature of one’s illness. Nida learned these healing practices from years of living in Capas, Tarlac, surrounded by Aeta communities. 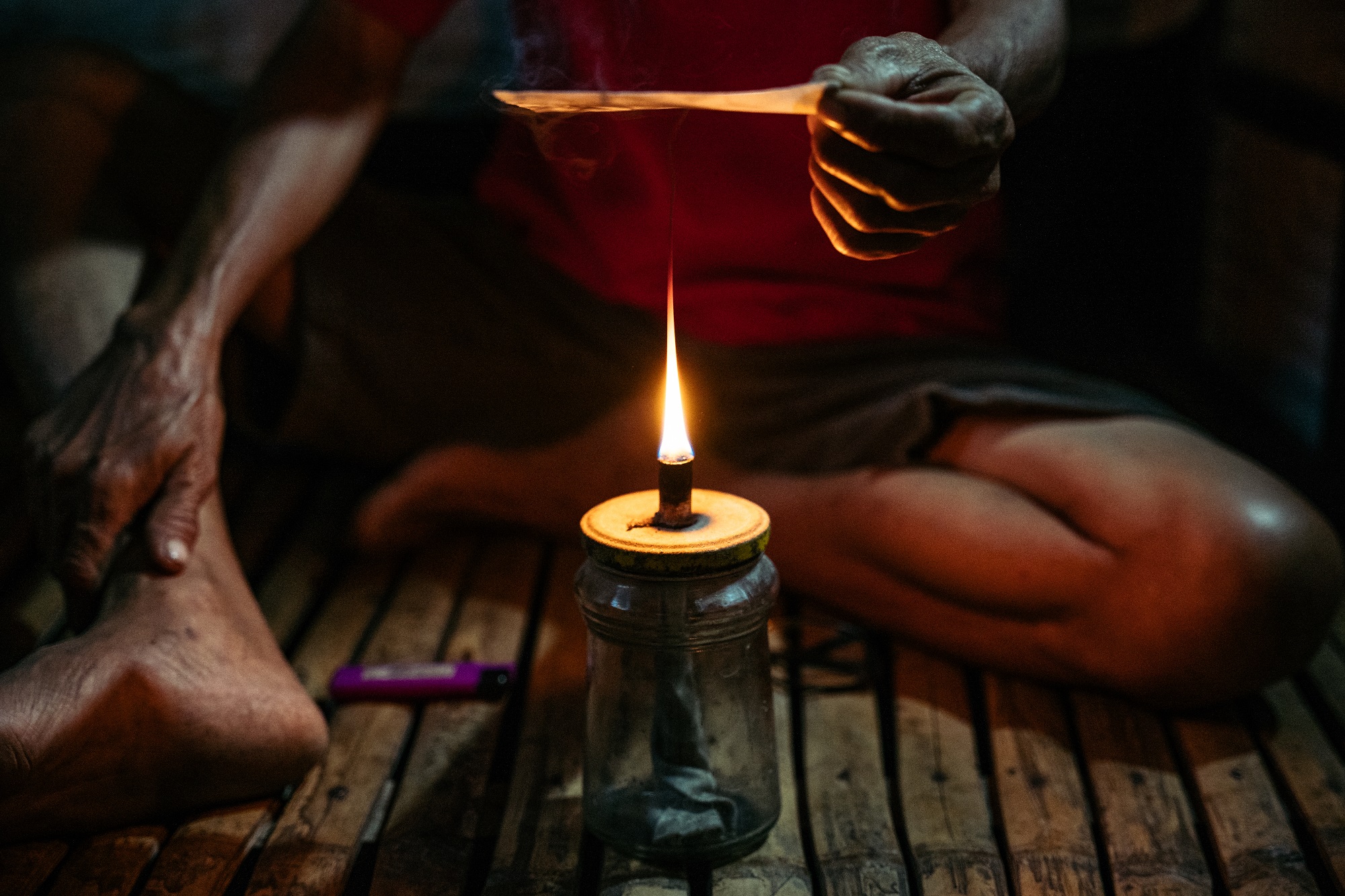 An alternative diagnostic ritual performed by healers to identify maladies involves hovering a blank paper over a gas lamp. According to Nida Cautidar, the resulting burnt formations suggest that the sick person has unconsciously disturbed dwelling places of spirits. 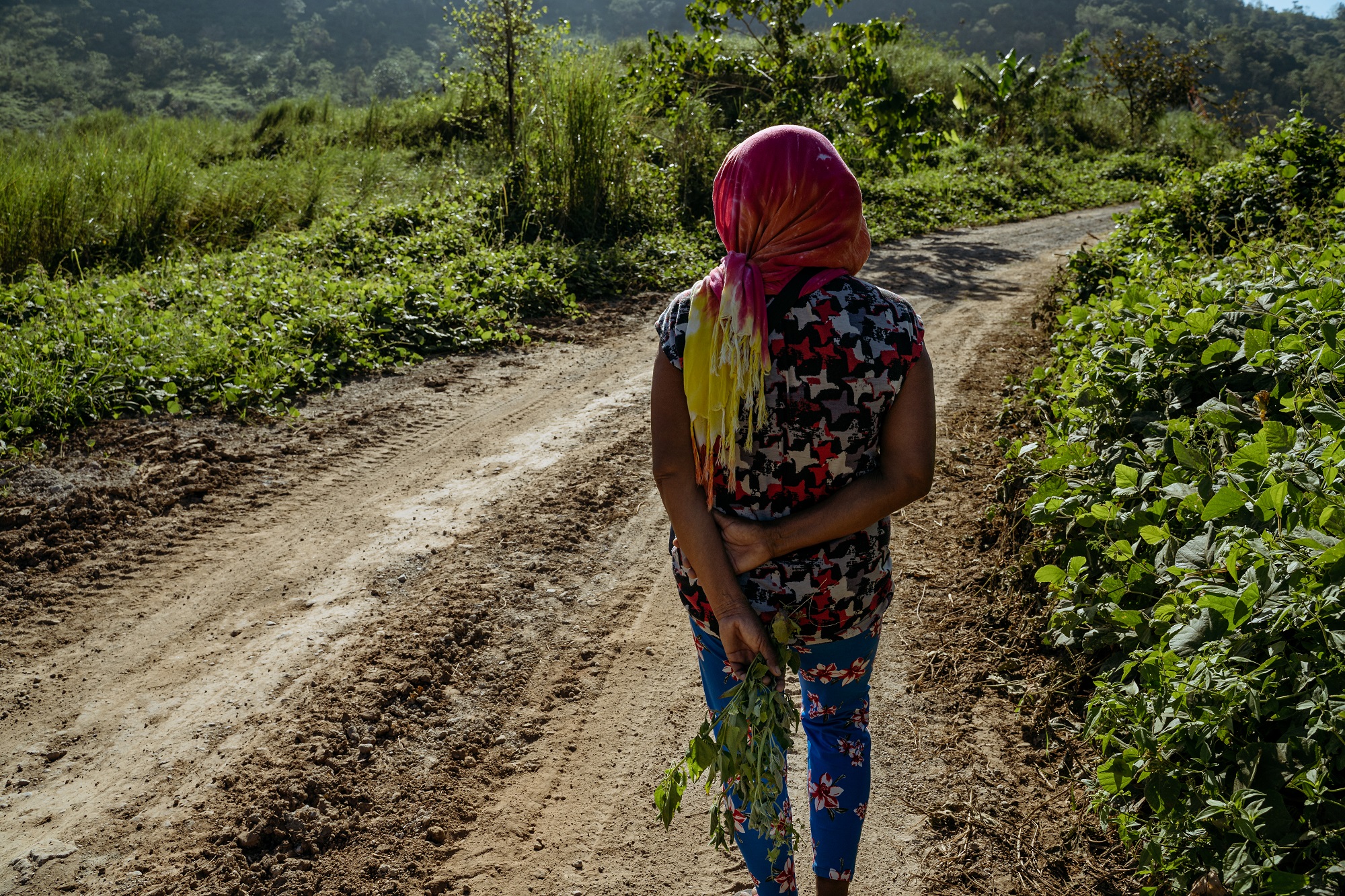 Aeta resident Leah (name changed to protect her privacy) holds freshly picked hagonoy weeds while strolling along a flattened road in Sitio Alli, Capas, Tarlac. According to Leah, they used to roam freely in the area, which was covered with herbal plants and fruit-bearing trees. Security cameras have been installed to monitor intruders amid the construction of New Clark City. 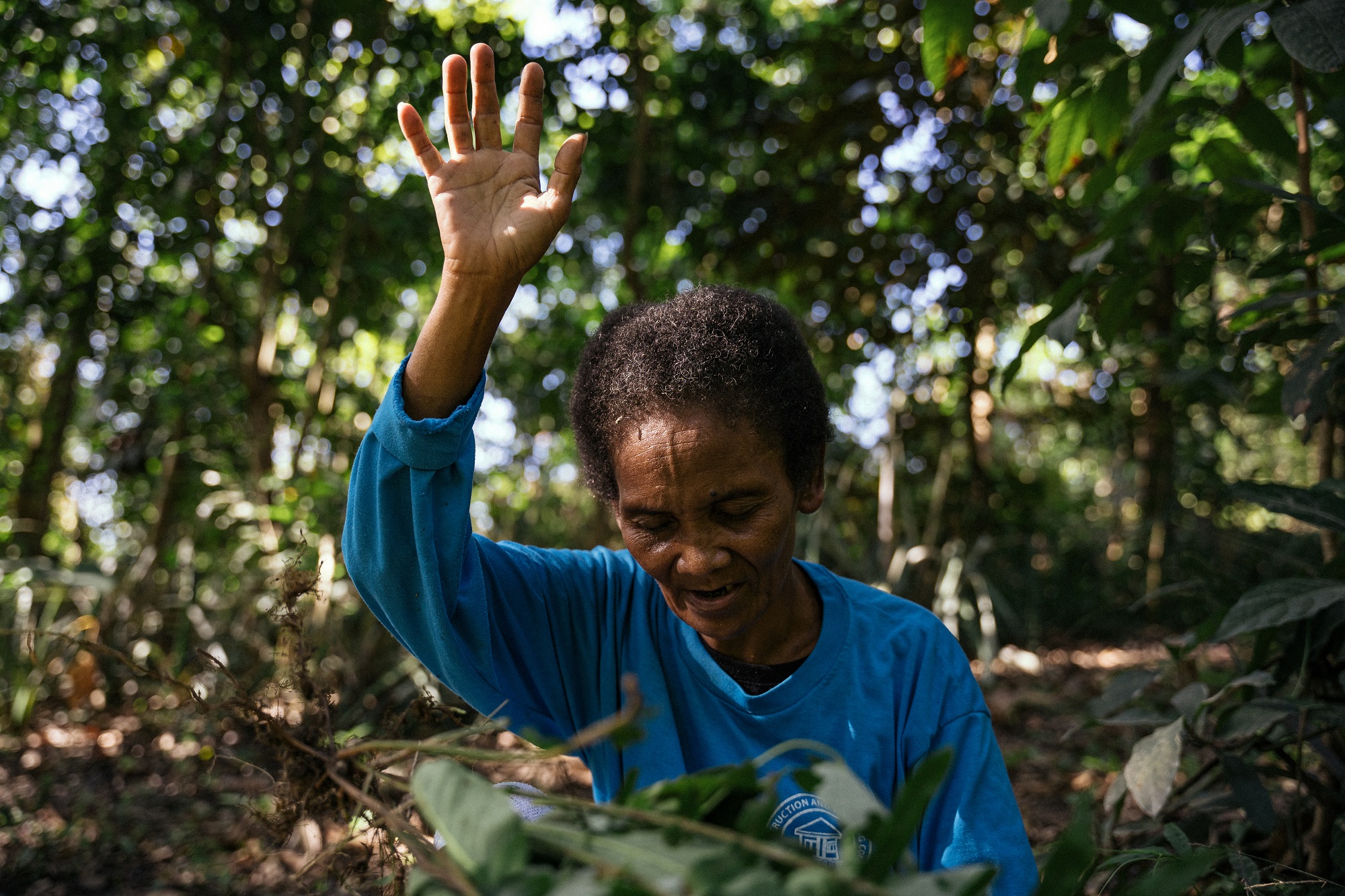 Lily De Guzman, an Aeta healer from Sitio Gayangan, prays over medicinal plants to be used for her sick grandchild. As one of the senior Aeta healers from her community, Nanay Lily is revered for her spirituality and vast herbal knowledge. 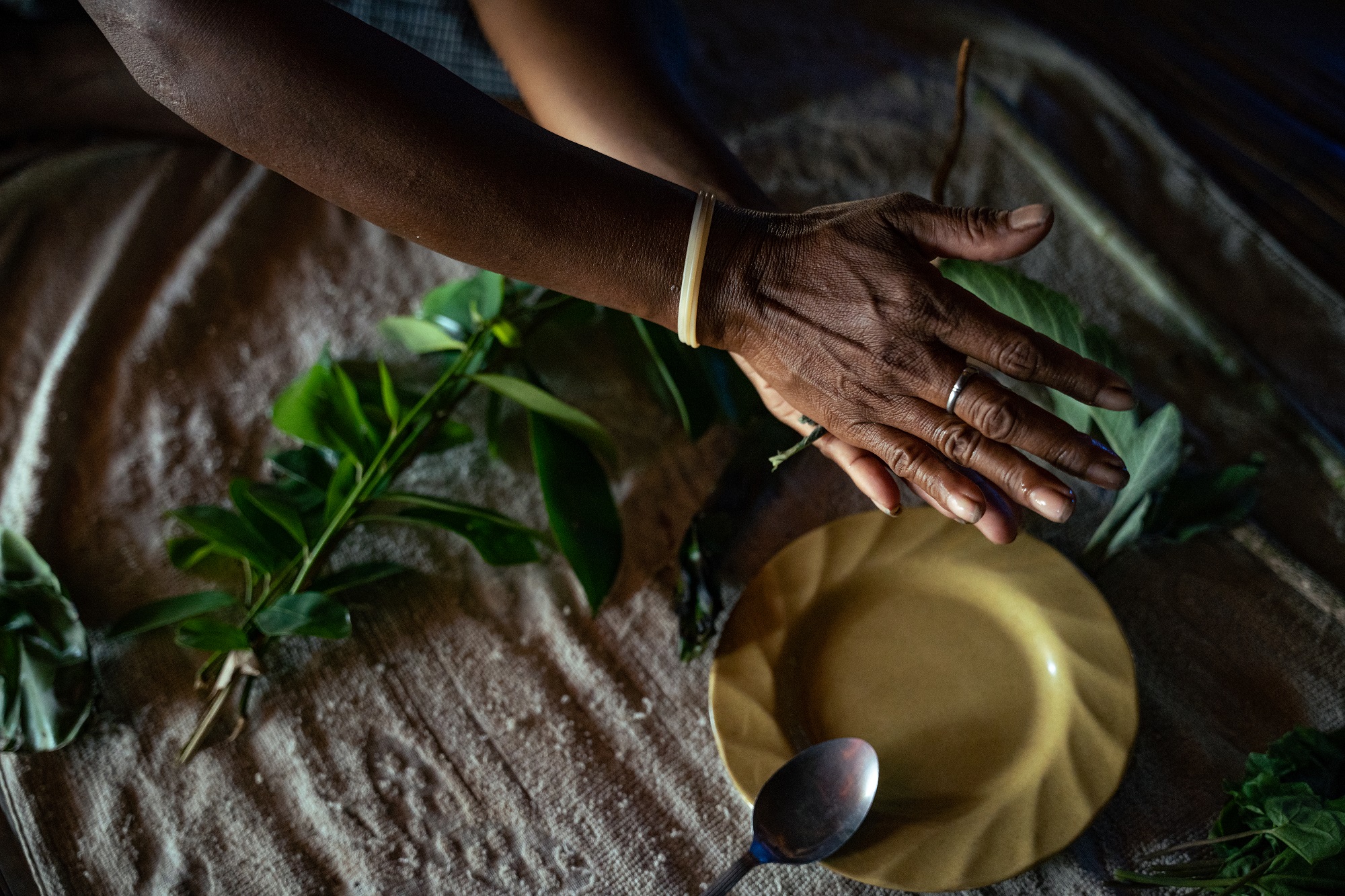 Sambong leaves are pounded to extract juice, taken orally to cure stomach ache and diarrhea. The Aetas, who live in the mountains, have utmost respect for the living world. Their traditional medicine practices are deeply rooted in nature. 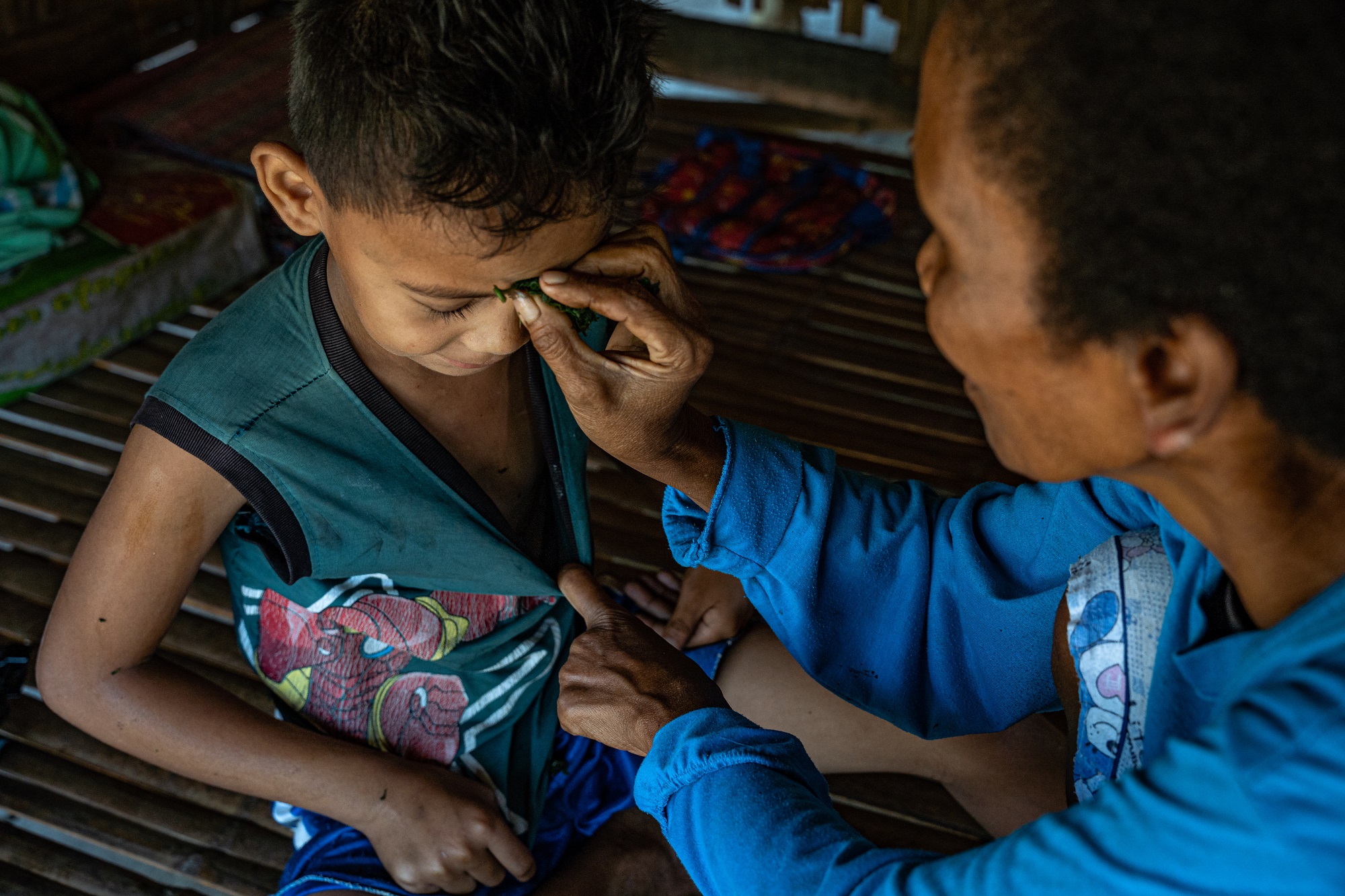 Lily De Guzman presses on hagonoy leaves mixed with salt onto her grandchild's forehead after he shows flu symptoms. Lily and the Aeta community of Sitio Gayanon firmly believe that the hagonoy plant keeps them safe from the Covid-19 pandemic. 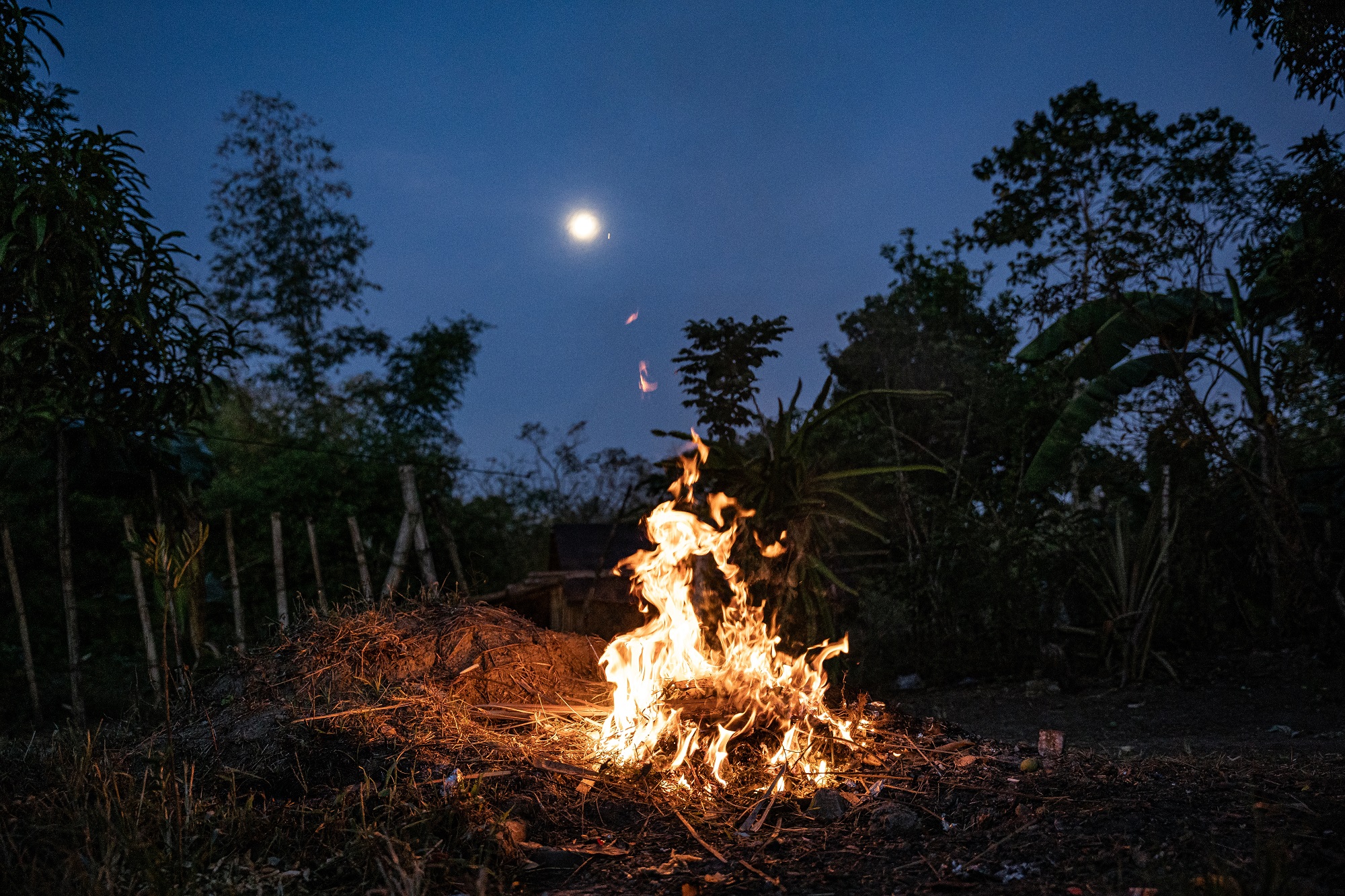 ‘Anituhan’ is a kind of community healing ritual that is often performed by the healer along with family and relatives during a full moon. In Aeta culture, the ‘anito’ represent environmental spirits residing in the natural world. Aetas believe that their traditional dances and music make it possible for one to be in contact with caring spirits. ‘Pag-aanito’ is the purest and highest form of the ritual that they can perform to heal a person possessed by spirits. 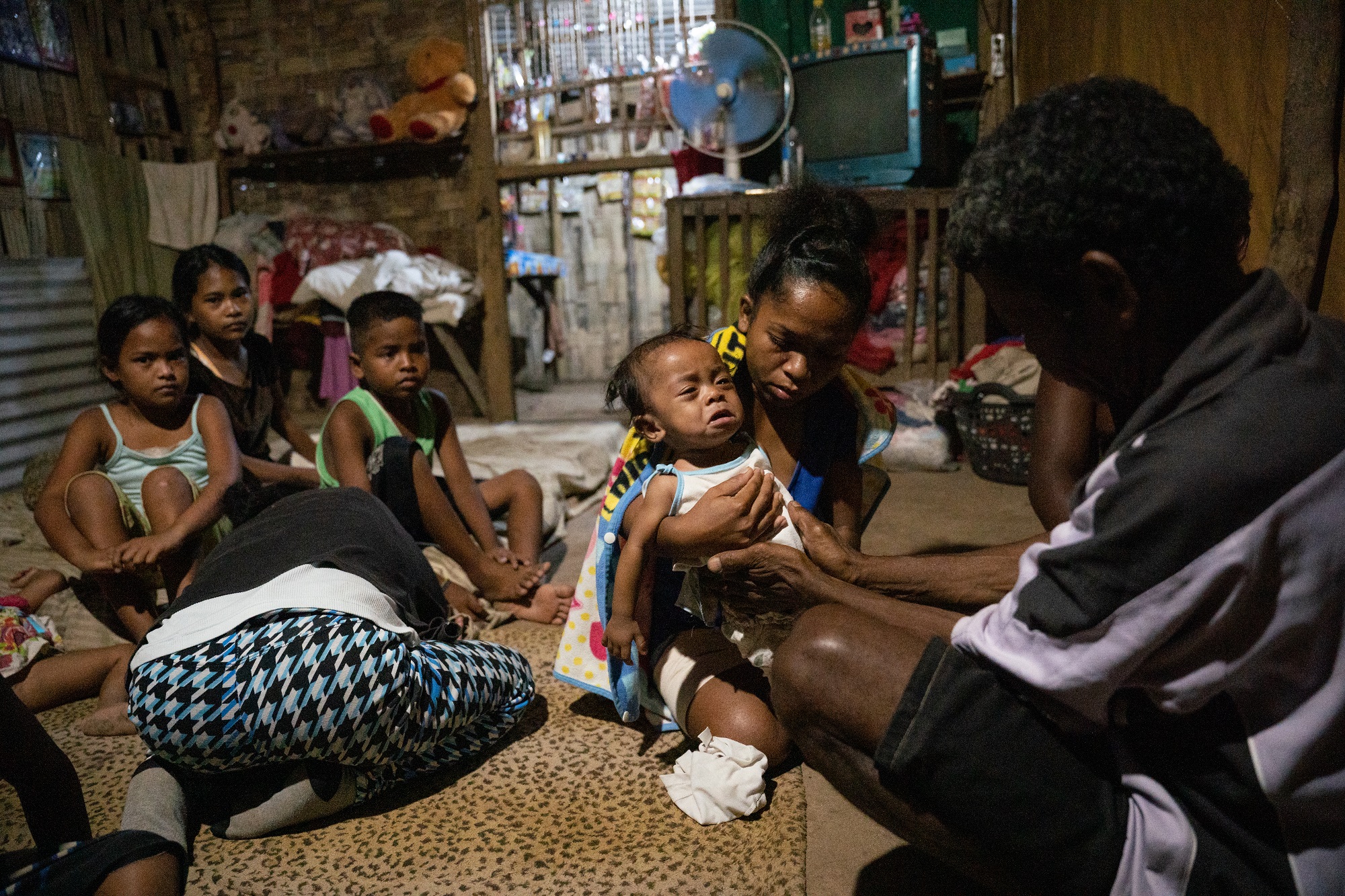 Oscar Capiz, an Aeta healer, chants as he performs the healing ritual of pag-aanito to his daughter Mary Grace (kneeling face down) and a grandchild. Oscar says he traveled for two hours to his daughter’s house in Sitio Flora after his personal spirit guide told him that his daughter was having a severe stomach ache. When medicinal plants don’t work, a healer is called to hold a ‘manganito,’ a séance, to ask the spirits for instructions to remove the cause of the illness. 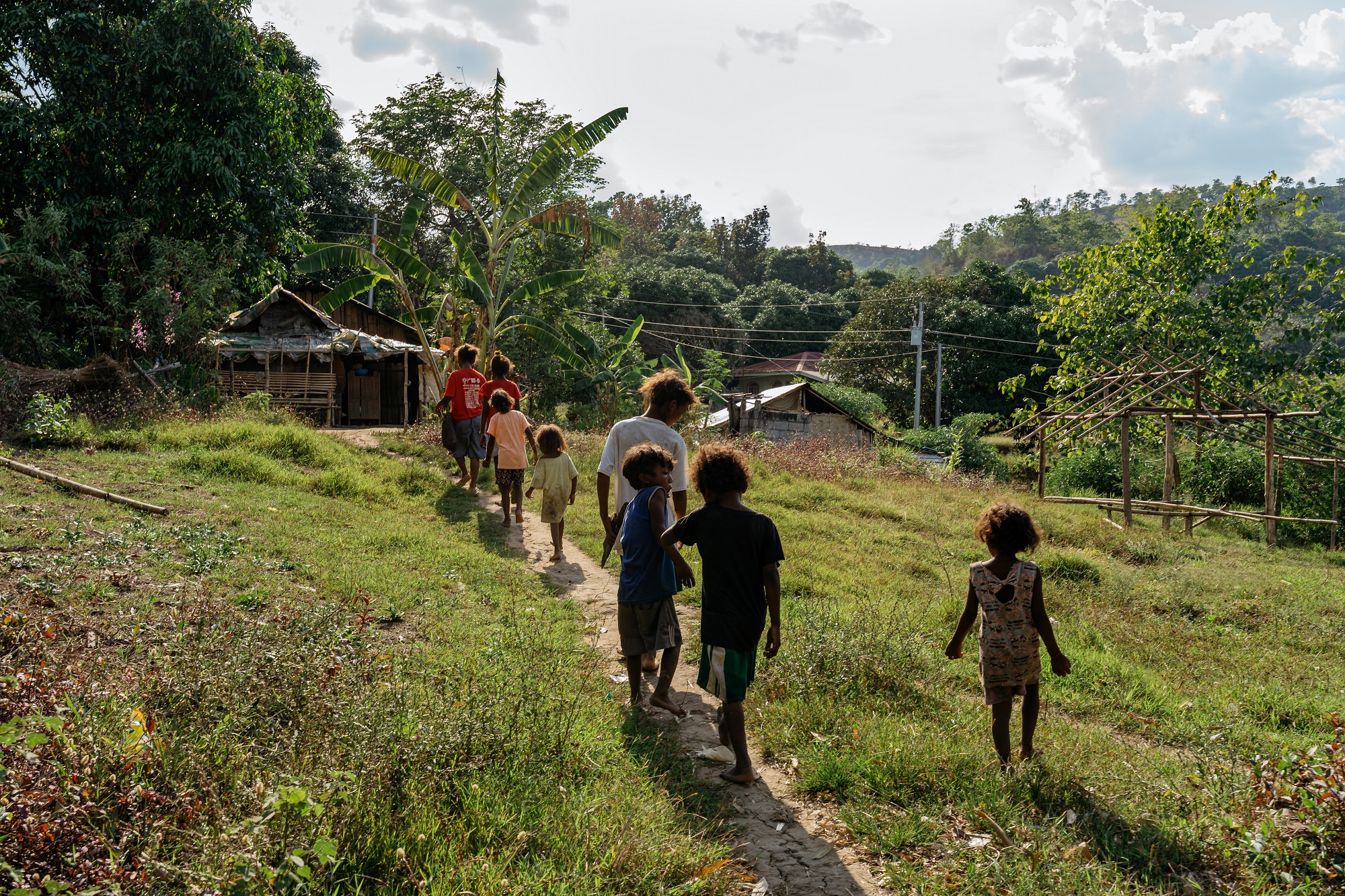 Rosette David, an Aeta healer, walks back to her home with her children after gathering herbal plants. Medicinal herbal knowledge and spiritual culture are passed on to the next generation of Aetas through oral tradition. 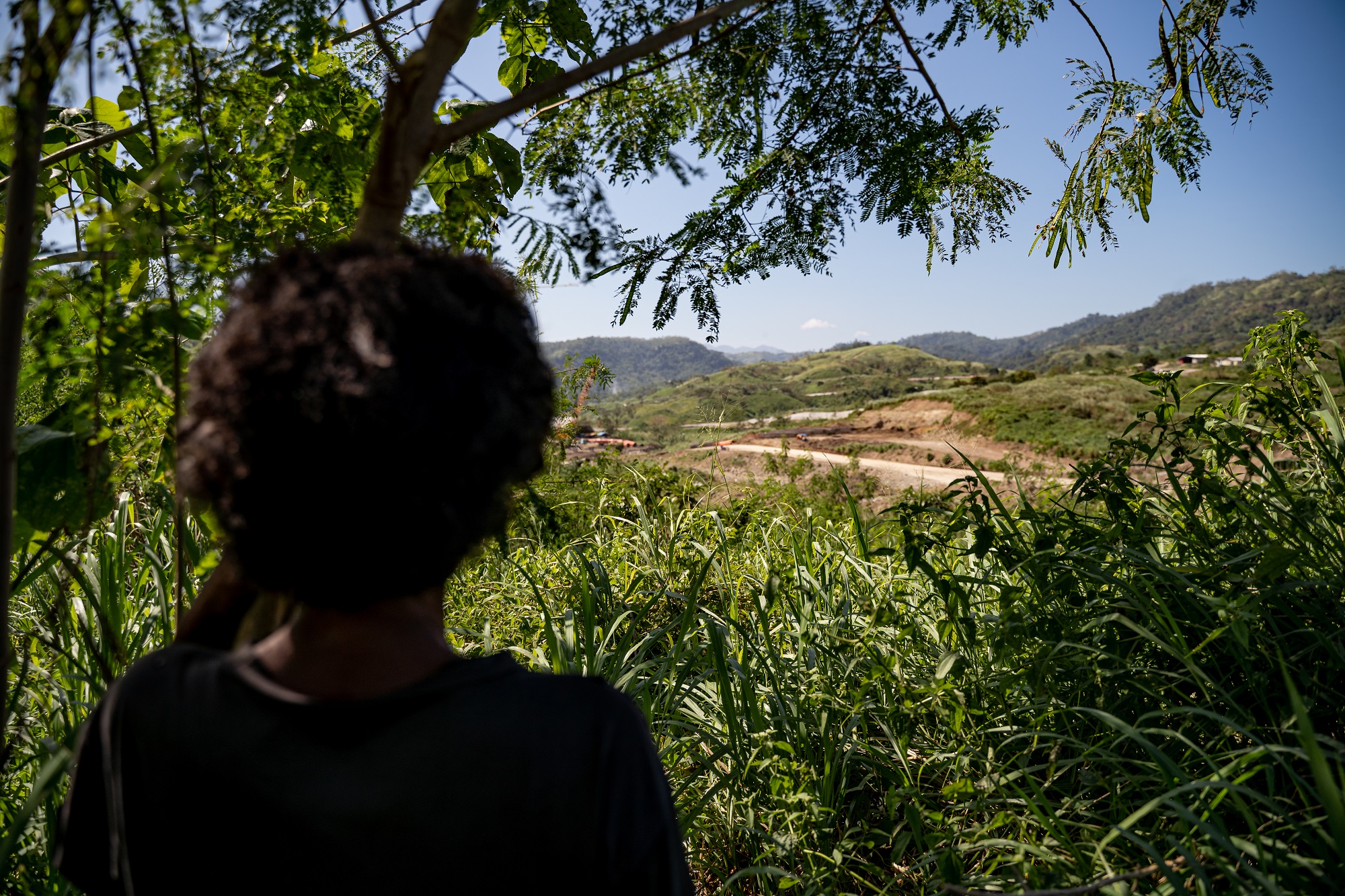 An Aeta looks at a construction site that was once cultivated land in Sitio Alli, Capas, Tarlac. Aeta communities fear their natural cultural markers are being demolished with the construction of the New Clark City project.