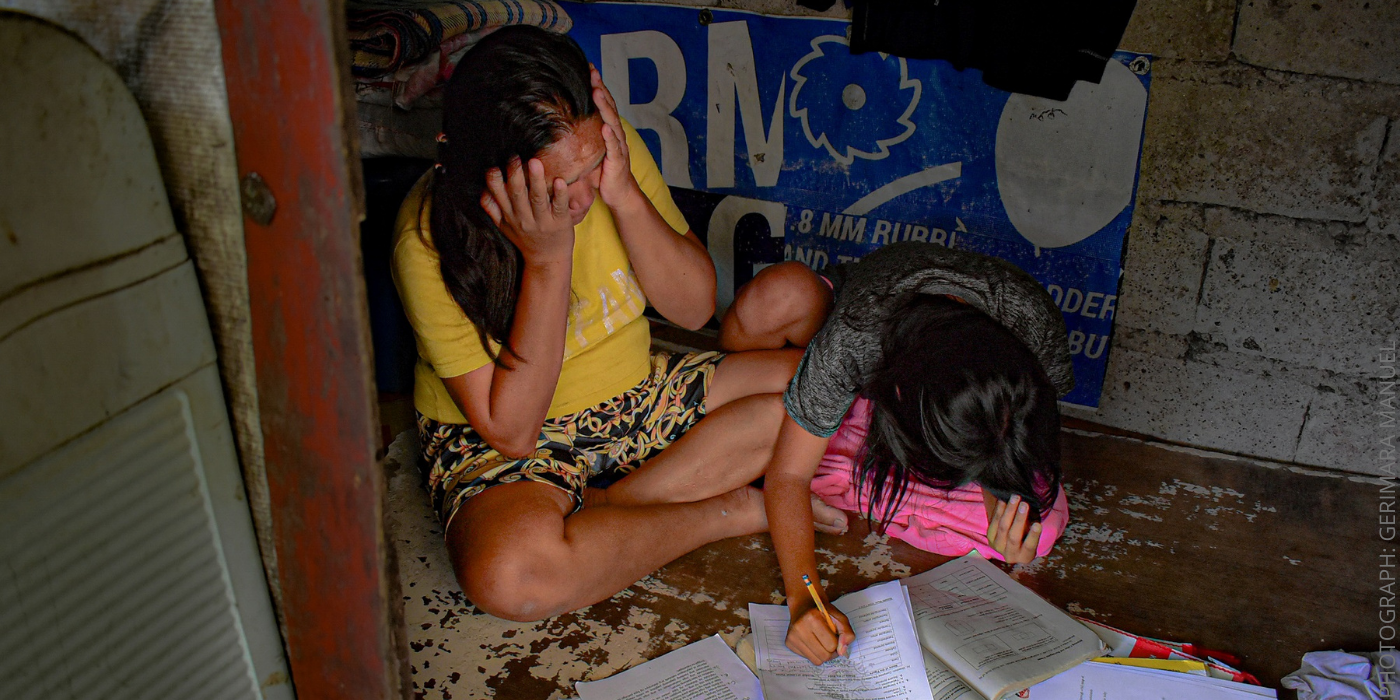 Manuel's photo essay sheds light to the story of Line Nalangan and her daughter Ysa. Short of a stable income due to unemployment when the pandemic hit the country, each day is a struggle for them to keep up with the modular learning system but their persistence to complete Ysa's education pushes them to get up each morning to produce and sell as many rags as possible, while answering modules and making sure that the family's basic needs are still being given.

A year ago, Line Nalangan, 46, lost her job due to the lockdowns imposed by the government in response to the Covid-19 pandemic. She used to work as a stay-in housekeeper for a Philippine Offshore Gaming Operations (POGO) firm, earning P8,000 per month. As soon as she became unemployed, her family came to the brink of homelessness.

With no stable income to pay for rent, Nalangan, her partner Arnolfo, and their daughter Ysa had to transfer to a makeshift home of less than one-and-a-half square meters at Sitio San Roque in Quezon City.

Nalangan makes ends meet by making and selling rags. The family earns P200 to P360 per day selling rags every morning on Mindanao Avenue. Having just enough to survive the day, the family could not afford gadgets for Ysa to use in online distance learning. Ysa, a Grade 6 pupil, opted for modular learning, in which printed handouts were distributed for learners to answer and submit anytime they could.

Instead of looking for a new full-time job, Nalangan decided to focus on helping her daughter answer printed modules, fearing her daughter would be left behind in the blended learning arrangement implemented by the Department of Education (DepEd).

The Quezon City government offered tablets to students but Nalangan decided not to accept it after learning that recipients needed to pay P6,000 in case of damage. Nalangan found the arrangement a bit ridiculous as children, the users of the gadgets, were by default, reckless.

Fortunately, Ysa was one of six learners from their barangay who got a tablet from a private donor through DepEd. Ysa was able to connect to a nearby computer shop that provided a Wi-Fi connection for three hours for P5.00. This allowed her to check instructions from her teacher and do quick research on assignments.

The Wi-Fi signal, however, was often too weak to open Google Classroom links or Facebook messenger groups. Students were thus practically left to learn the modules on their own without teachers to guide them. “Para lang siyang exam paper. Hindi namin alam saan kukunin ang sagot (It’s like an exam. We don’t know where to get the answers),” Nalangan said. One time through an online message, Nalangan’s daughter asked her teacher directly how to answer a question in the module. Her teacher answered, “Hindi ko rin alam (I also don’t know).”

Every day, Nalangan does her best to juggle between making rags, finding something to eat, and answering as many modules as possible to prevent them from piling up. She would get up as early as 6 a.m. to make bundles of rags to be sold the next morning. At 7 a.m., even before eating breakfast, she and Ysa would start answering modules until lunchtime. In the afternoon and evening, they worked on more rags.

As a high school graduate, Line Nalangan has high hopes for her daughter. “Para hindi ganito (So it’s not like this),” she said. Ysa wants to be an information technology expert despite her lack of access to gadgets and internet connection. She believes data and technology are the future. 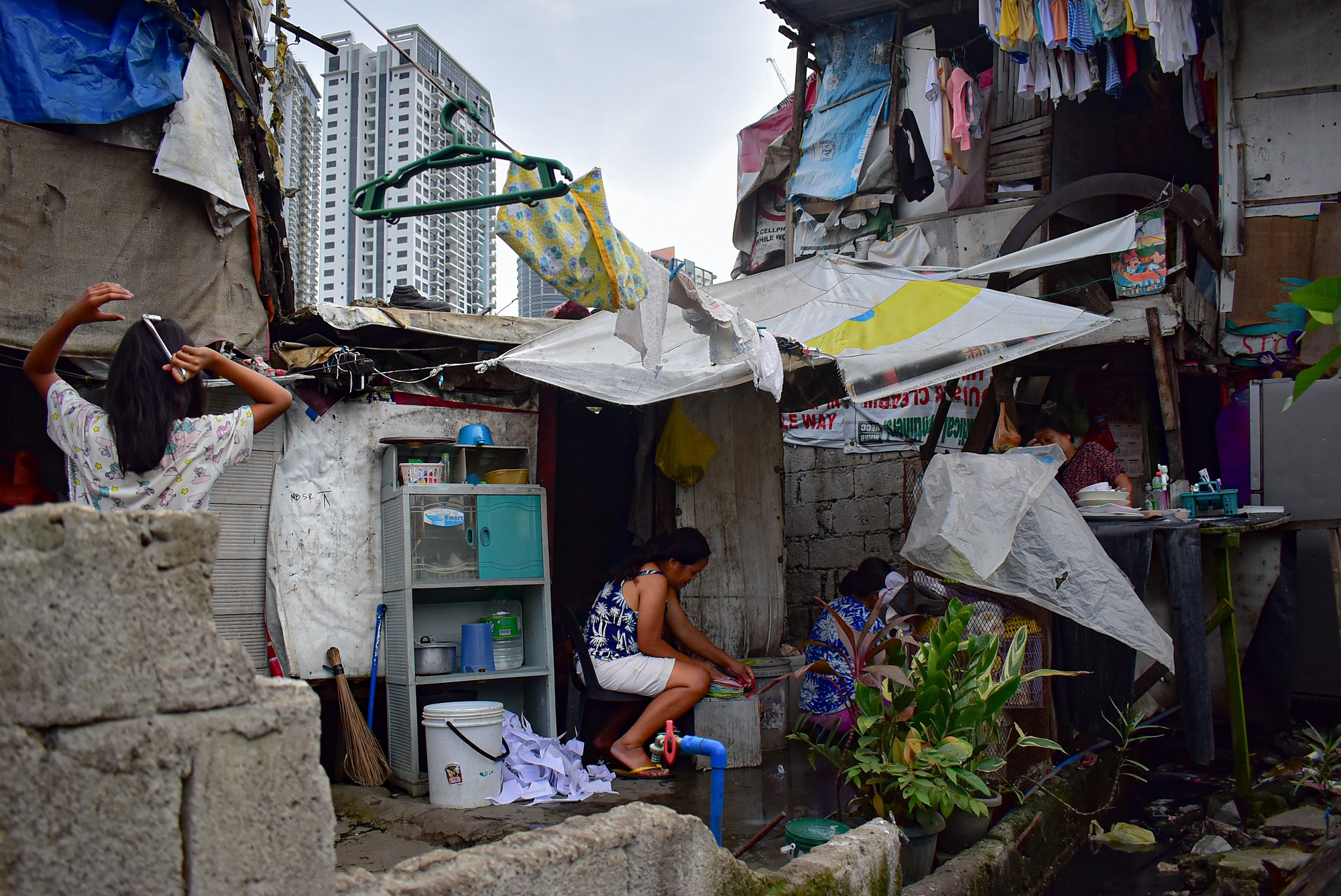 Line Nalangan makes rags and chats with neighbors as they help finish each other's chores. She needs to sell five bundles of rags a day to help cover her family’s expenses. 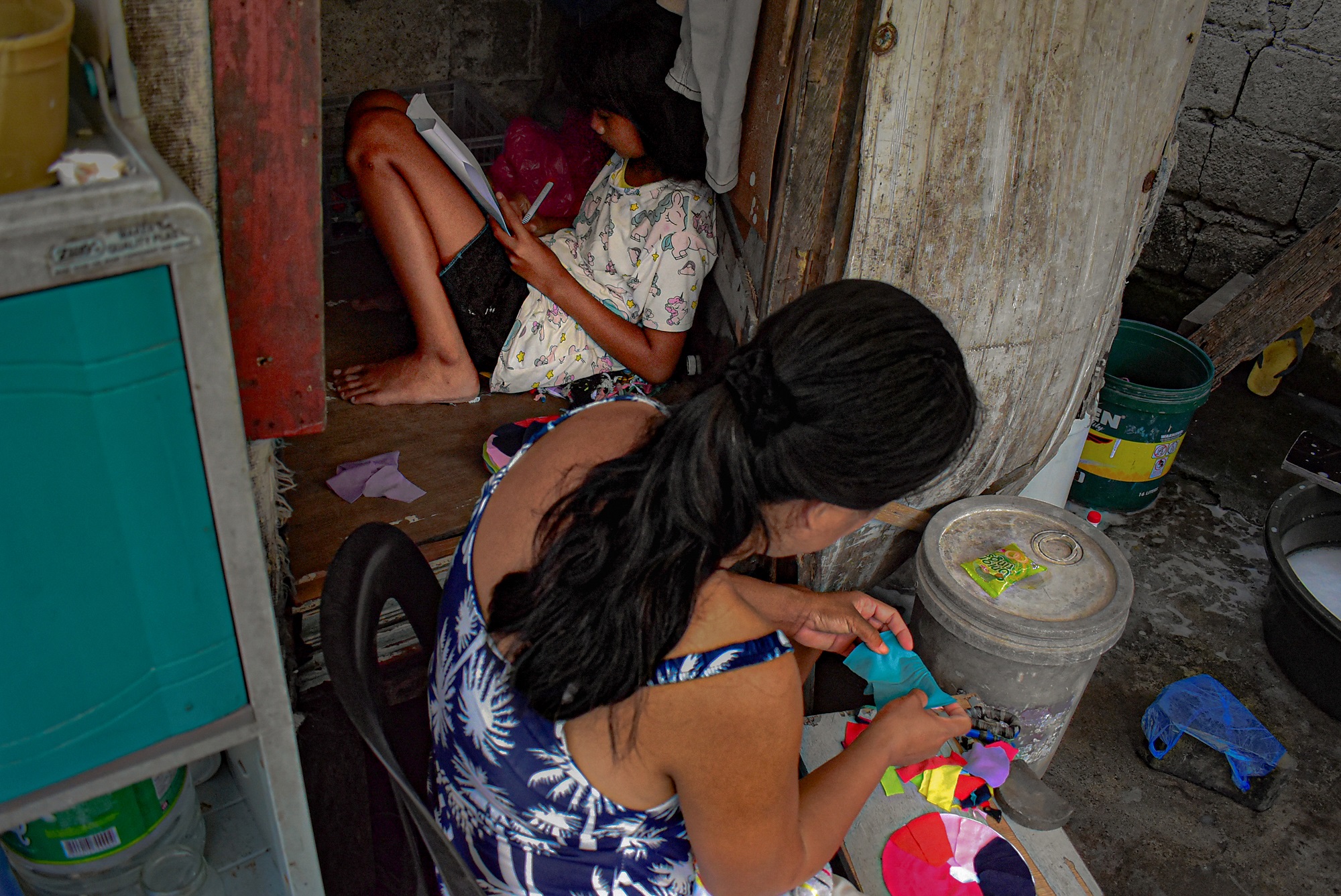 Ysa answers her modules while her mother places the rags on a pile. 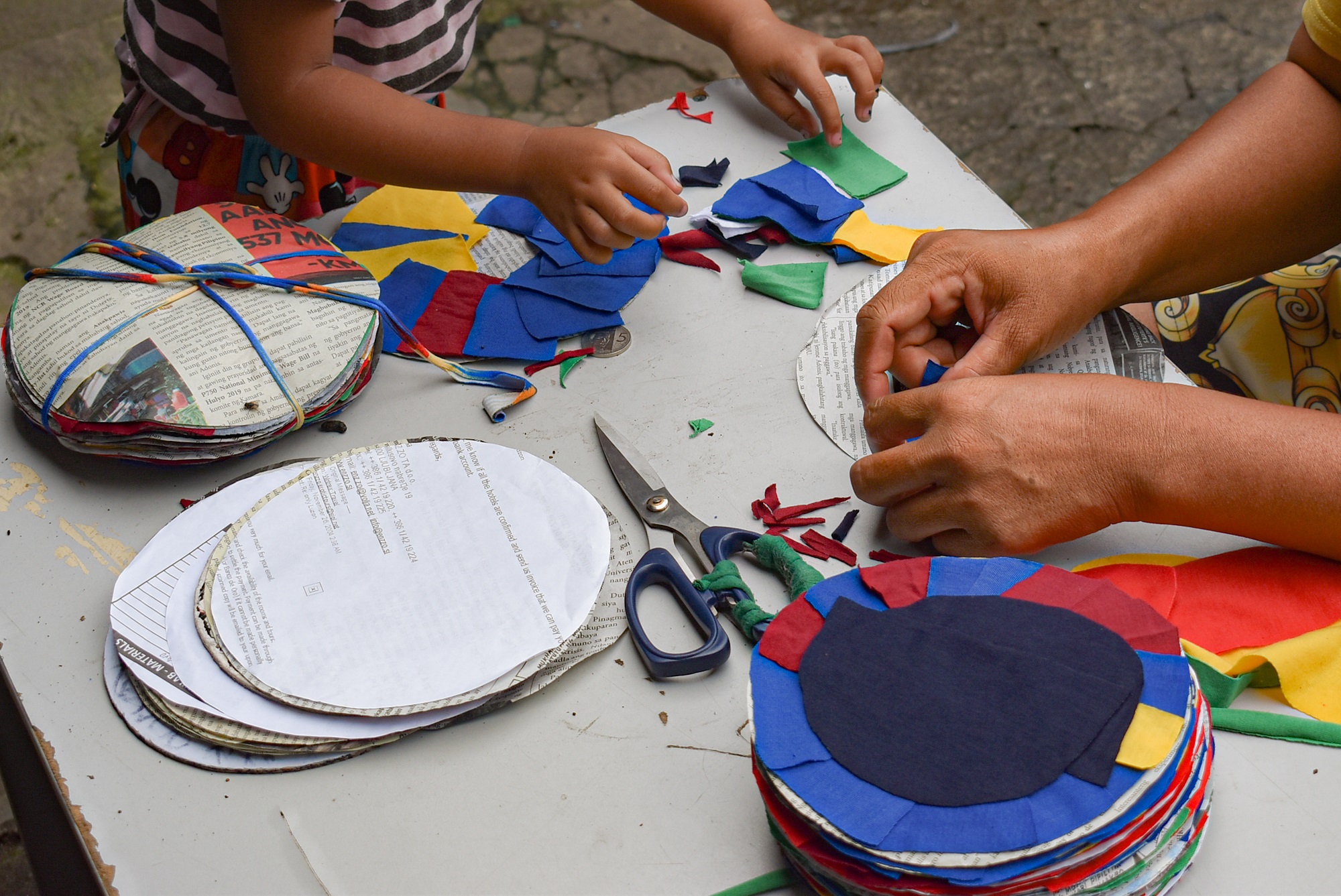 Nalangan makes rags with the help of her niece. Her partner has just left to sell finished ones so they have money for the day. 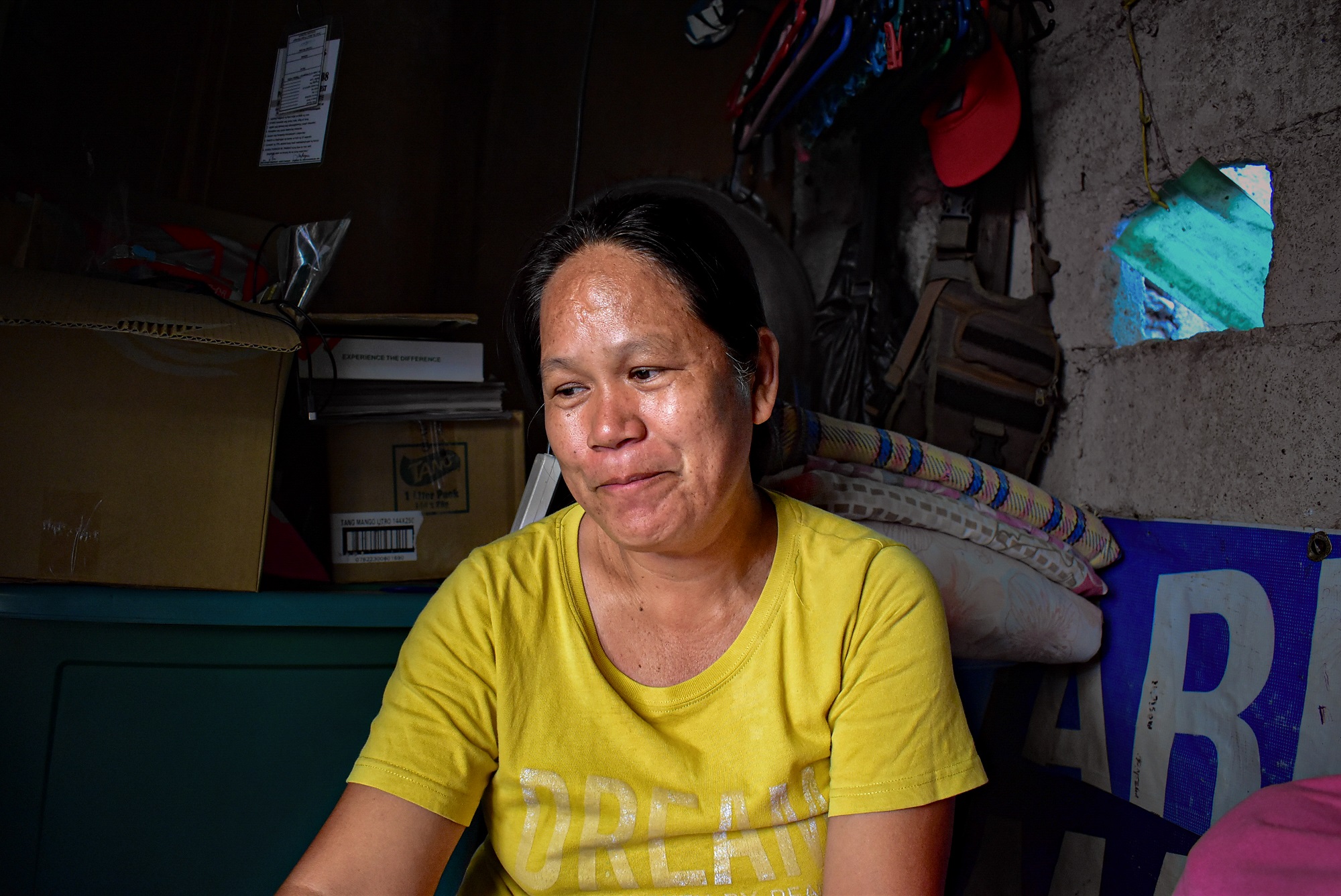 Teary-eyed Line Nalangan describes her family’s experiences during the lockdown. 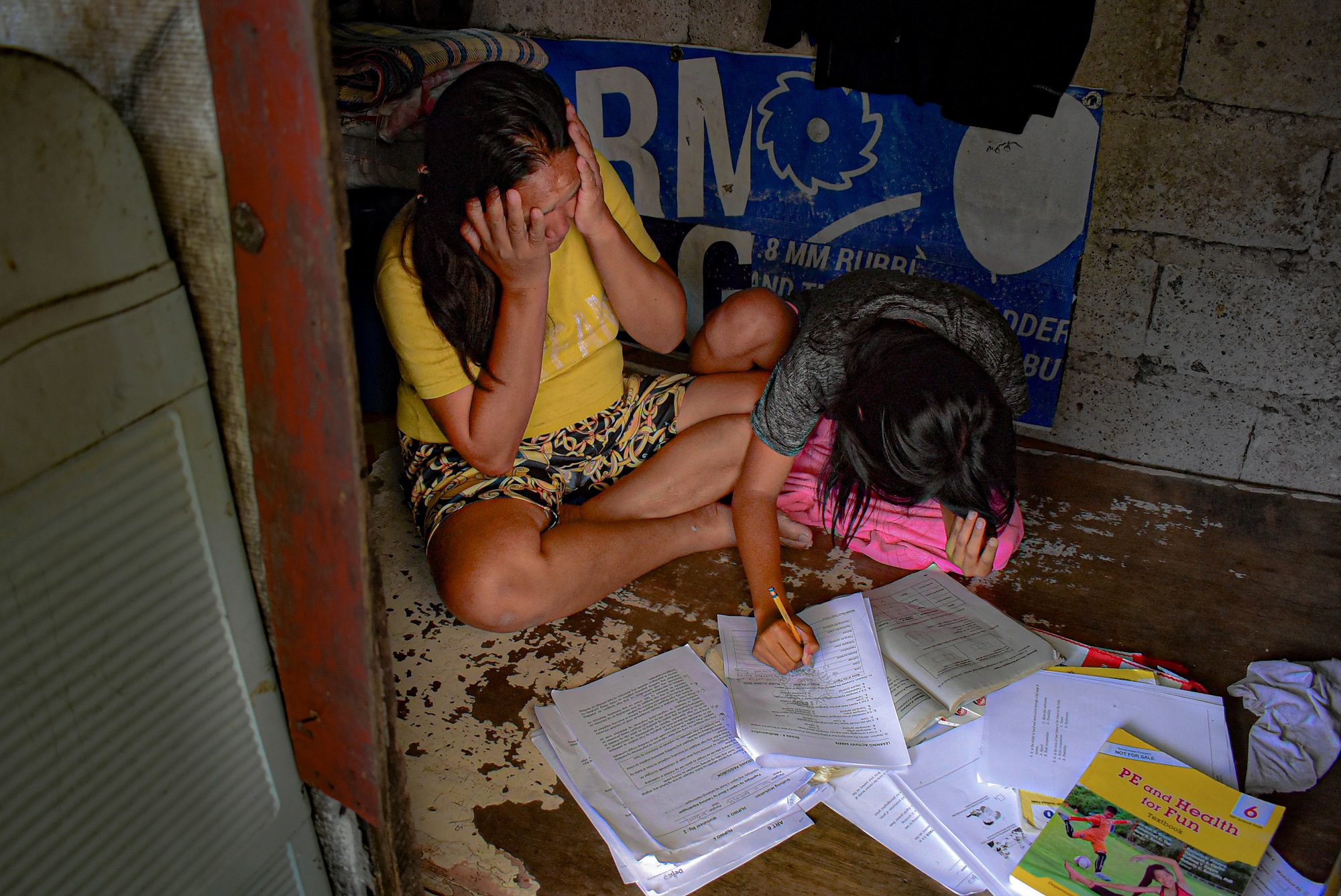 Nalangan, a high school graduate, finds it difficult to help her daughter out in some subjects such as music and math. The lessons are different from what they were taught before, she says. 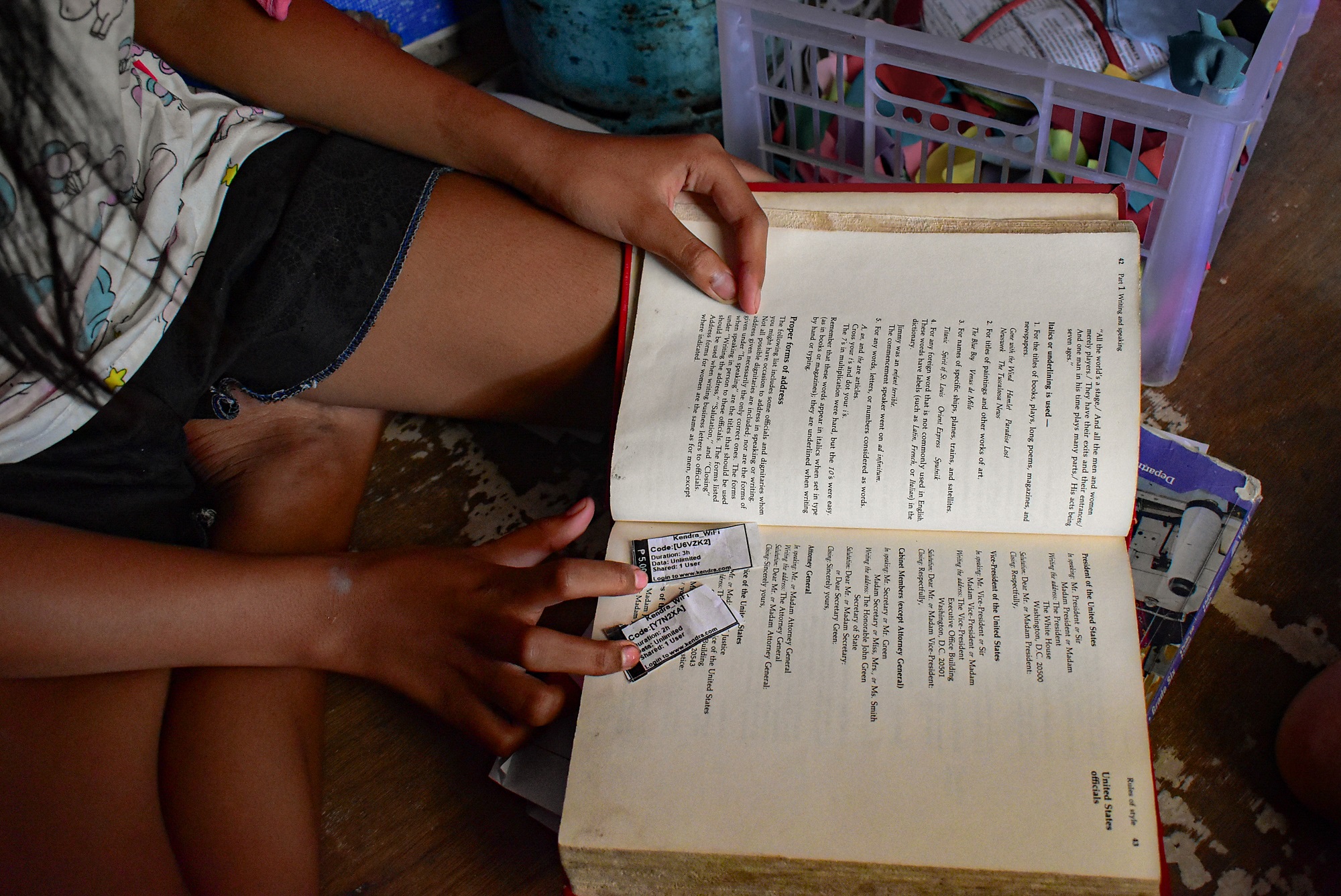 Ysa reads her second-hand textbook about computers. In between the pages are Wi-Fi stubs for three hours, worth P5.00 each, from a nearby computer shop. But the signal is so weak that links sent by teachers online won't load. 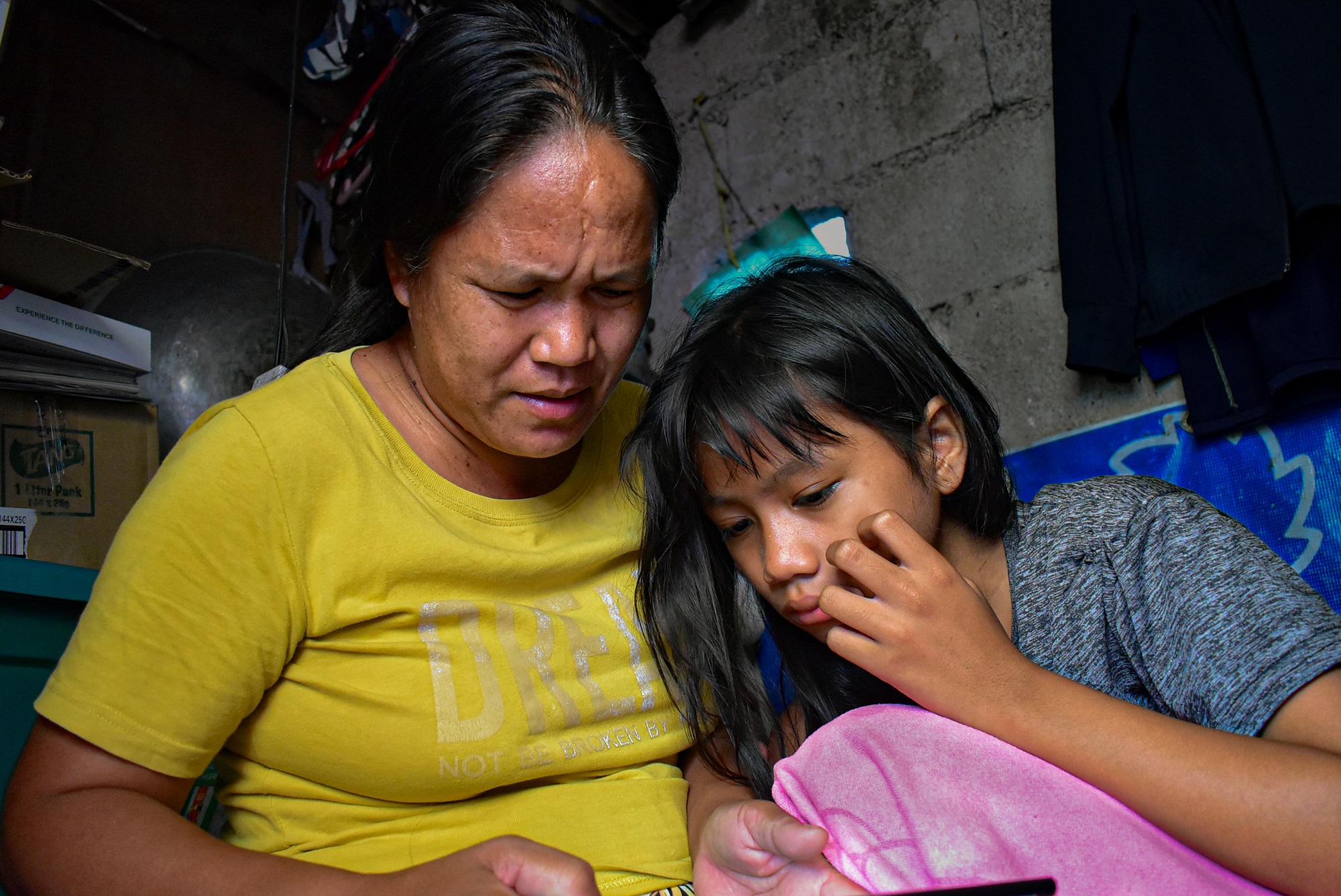 Nalangan shares how one time she was not informed that there was a distribution of new modules. To her dismay, Nalangan found out that she was not included in the group chat with the teacher. As a result, Ysa did not get grades for that semester. 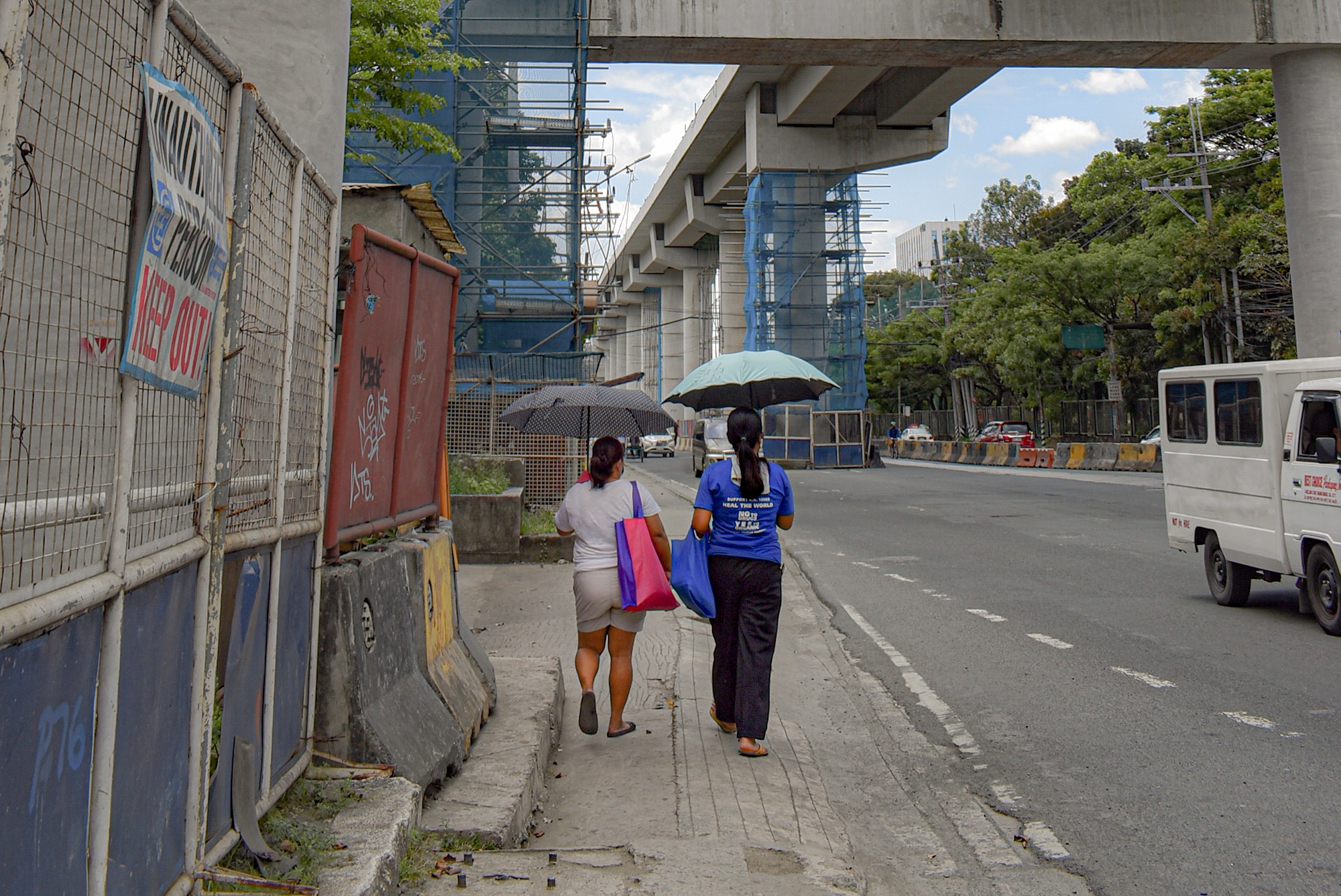 ‘Pang-bigas na rin iyon (That can buy us rice).’ Instead of paying 50 pesos to ride a tricycle, Nalangan and her co-parent walk almost four kilometers to and from school to pick up modules given to them by teachers every two weeks. 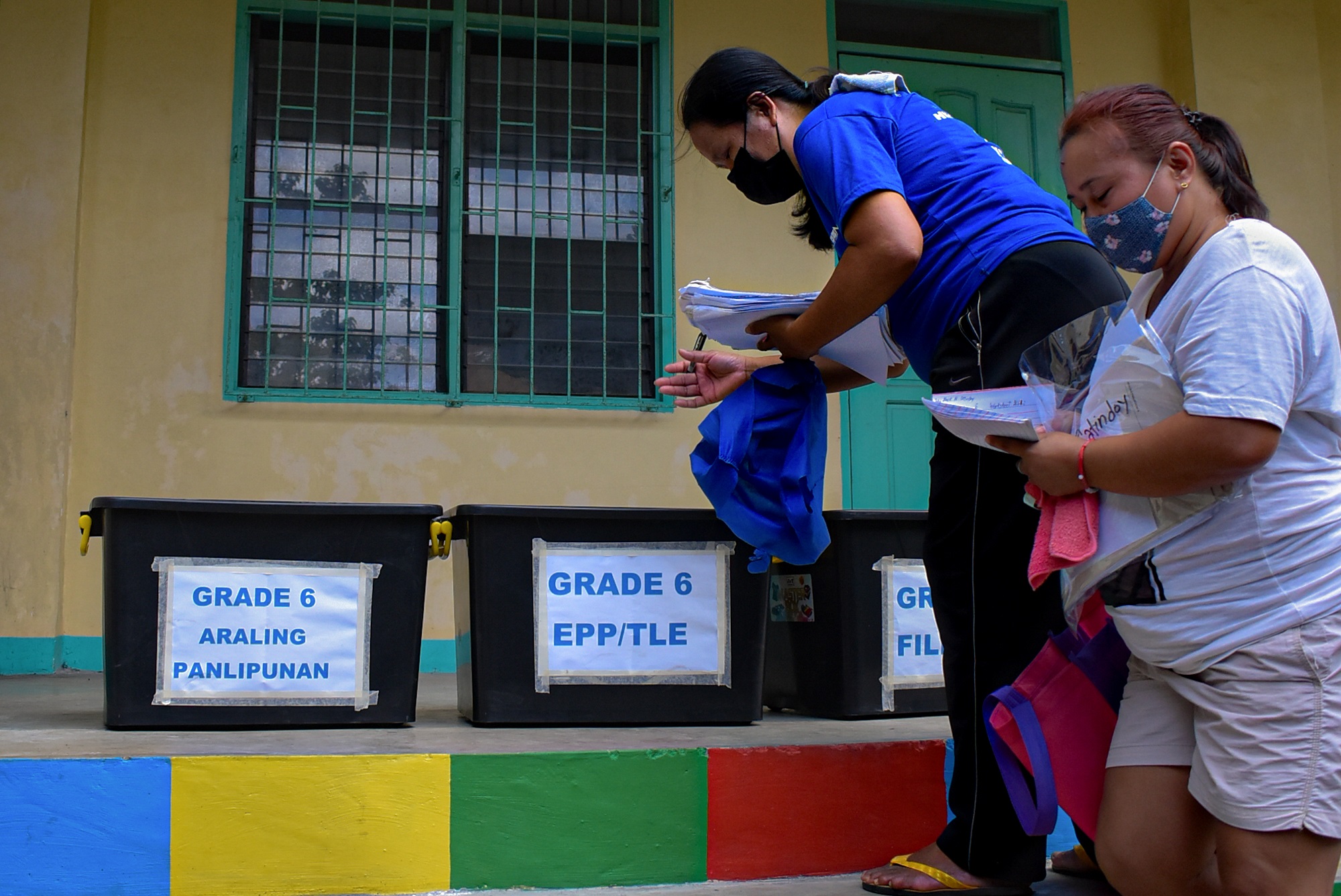 Nalangan and other parents drop answered modules in boxes for each subject. They won’t know if their answers were right. Instead, a photo of their report card would be sent to them through Facebook messenger after each grading period. Nalangan recalls that during the two-week Christmas break, she and daughter Ysa were swamped with 53 modules that needed to be answered before the resumption of classes. 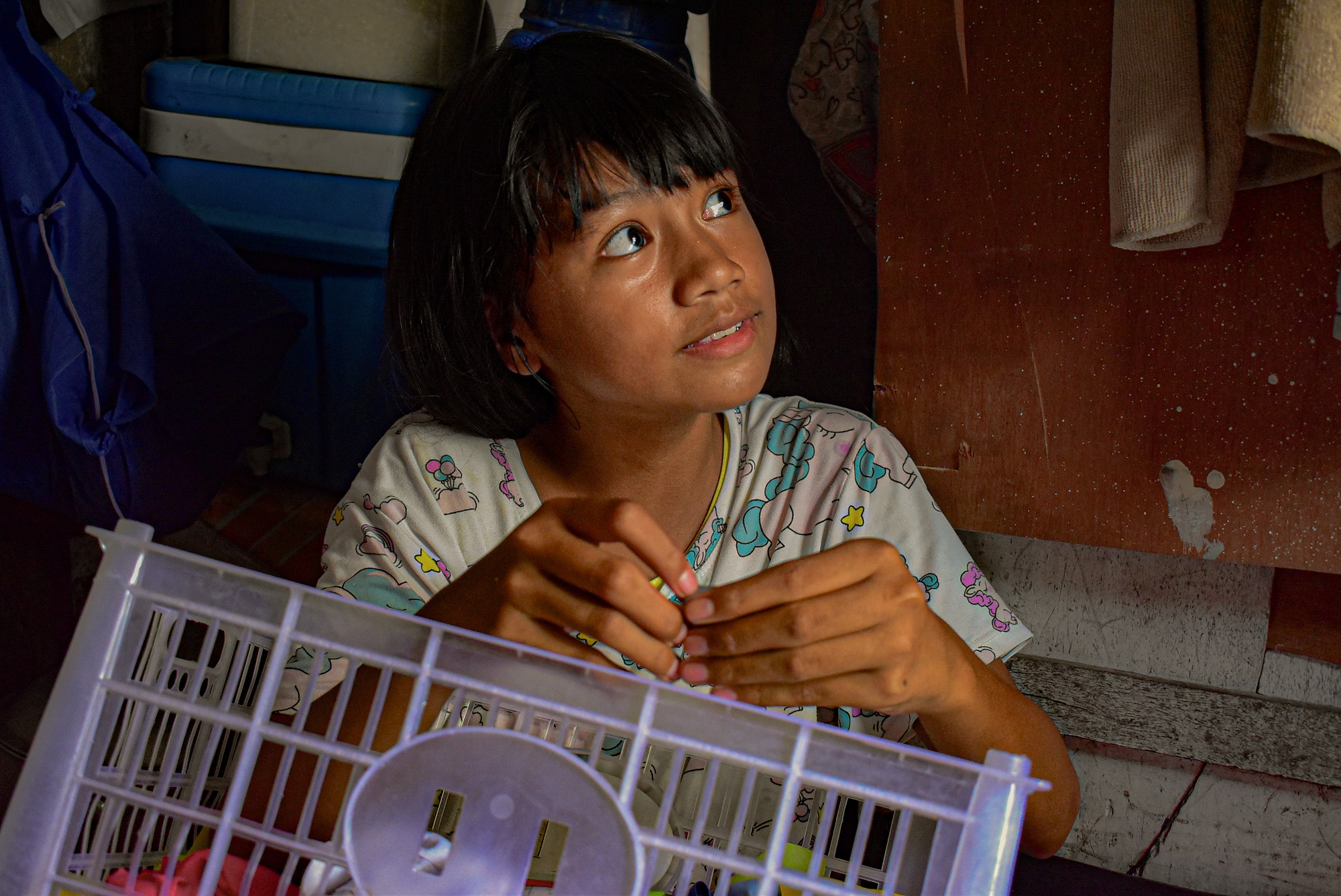 Ysa excitedly shares her opinions on why data and technology are the future. According to her, if you are not updated with the trends and recent technological developments, you will be left behind. She plans to be an information technology expert and a lawyer someday. 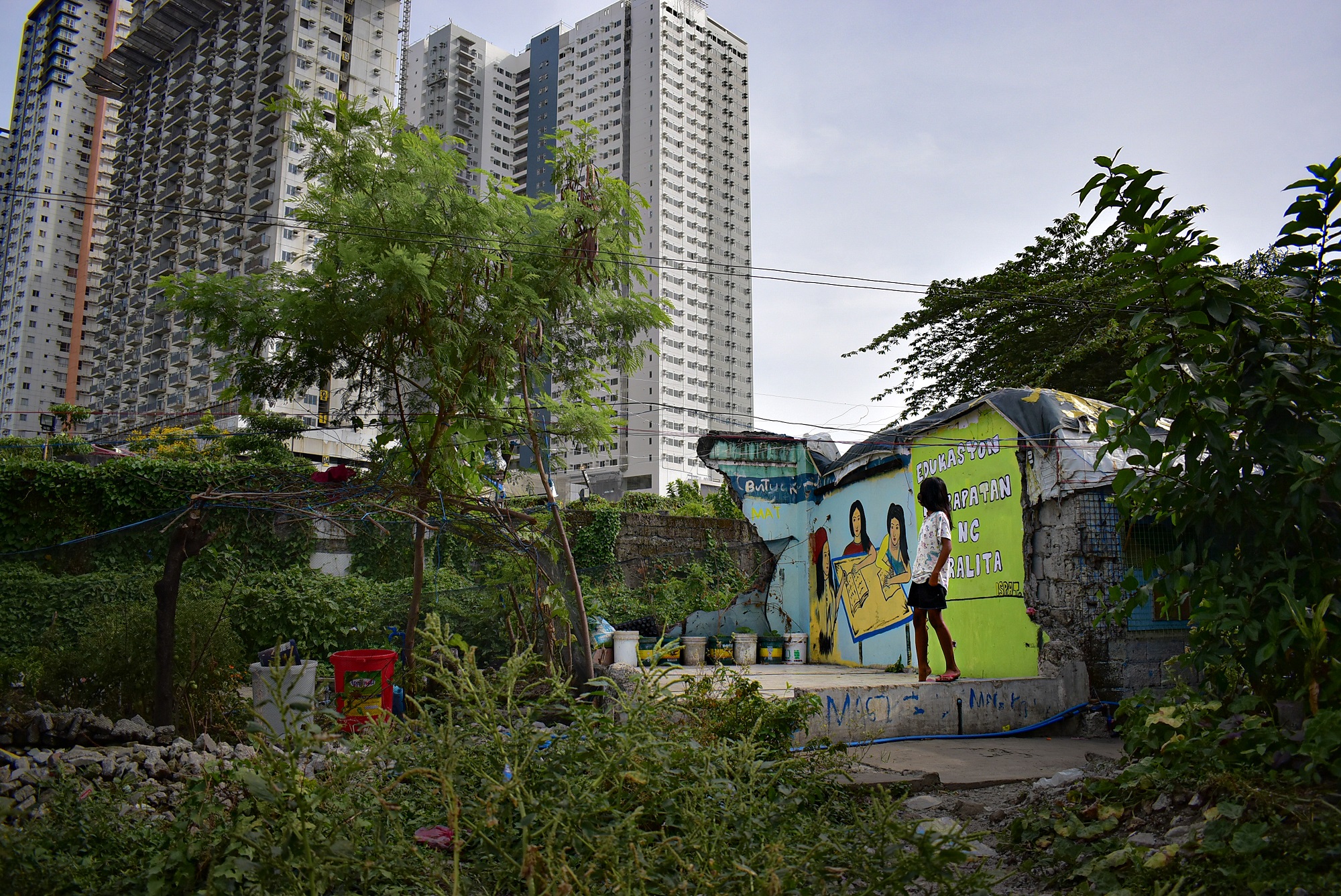 Ysa looks at the towering buildings of Ayala Land Inc. as she stands in a makeshift classroom of ‘Eskwela Maralita,’ an alternative learning initiative of the community and Save San Roque Alliance that aims to help children and their parents with distance learning. Behind her is a mural with the words ‘Edukasyon Karapatan ng Maralita (Education is the Right of the Poor).’