“I haven't seen an appointee of President Duterte vote against him, whereas every president before him had a problem with the court."

Five years into his presidency, and with only a year left in his term, Duterte has packed the Supreme Court with his appointees. Twelve out of 15.

There will only be two justices he didn’t appoint who will be left in the high court by the time his successor assumes office in 2022. There’s also a pending impeachment complaint against one of them, Associate Justice Marvic Leonen.

The Supreme Court, much like Congress, has long been criticized as a rubber stamp of the executive. But it has turned for the worse under Duterte, said Gatmaytan.

“It is worse [under him] because I haven’t seen a Duterte appointee vote against him, whereas every president before him had a problem with the court,” said Gatmaytan.

Deference and loyalty are two different things, but they become indistinguishable when the high court becomes packed with the appointees of the incumbent, as is often the case toward the end of a president’s term.

It is true that Philippine presidents often get what they want. Unlike Duterte, at least so far, his predecessors have had some of their big policies and plans derailed because of the Supreme Court.

The high court blocked the charter change bid of former President Fidel Ramos, who wanted to amend economic limits under the 1987 Constitution. Ramos was also suspected of working to lift the one-term limit on sitting presidents.

It also stopped Arroyo’s move to push charter change via people’s initiative, as well as her peace agreement with the Moro Islamic Liberation Front.

Aquino suffered big losses in the high court although he also successfully removed a chief justice, the late Renato Corona, over his failure to accurately declare his wealth in his SALN.

The Supreme Court ordered the distribution of his family-owned Hacienda Luisita and declared his Disbursement Acceleration Program, a budget stimulus scheme, and the Priority Development Assistance Fund or “pork barrel” unconstitutional.

For his part, Duterte won in the following cases:

• allowing a hero’s burial for the late dictator Ferdinand Marcos;

• extending martial law in Mindanao even after the military had defeated the militants and retook control of the city;

• ousting Sereno by way of a quo warranto petition; and

Gatmaytan pointed to the 2016 ruling on the burial of the late Philippine dictator Ferdinand Marcos as “the signal of things to come.”

Duterte and Marcoses were allies during the 2016 presidential elections, and he promised to allow the late dictator's burial at the Libingan ng mga Bayani during the campaign.

It was a very divisive and emotional issue, but the court favored the government 9-5-1. Yet, Duterte had not appointed anyone to the Supreme Court at the time. 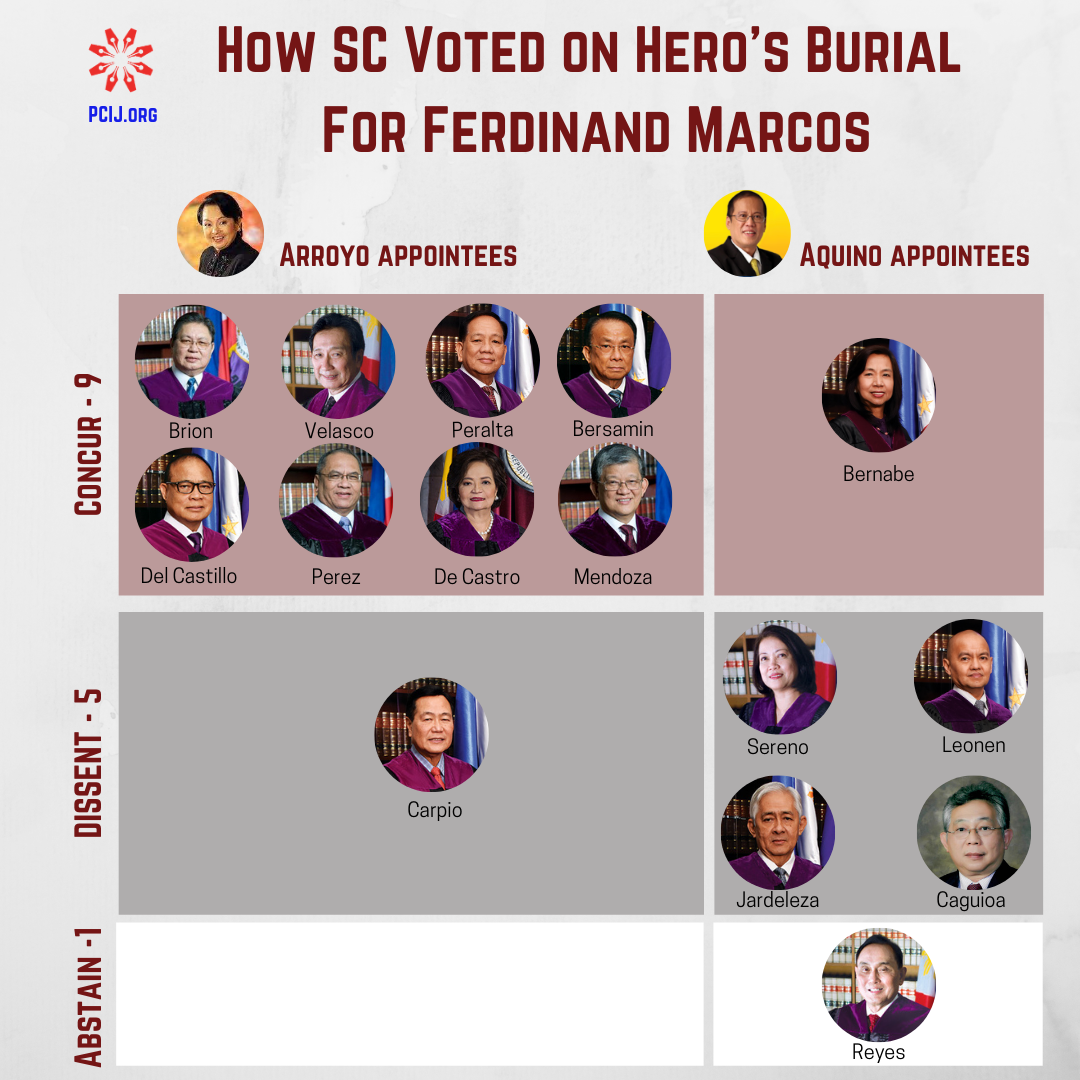 All of Arroyo’s appointees favored the Marcos burial while most of Aquino’s appointees junked it. Bernabe voted with the majority while Bienvenido Reyes inhibited. He was Duterte's fraternity brother at San Beda College of Law and a former lawyer of the Aquino family.

Gatmaytan found the high tribunal’s rulings on martial law in Mindanao as the worst decisions under Duterte.

Duterte declared martial law over the entire Mindanao as local and foreign militants laid siege on Marawi City in May 2017. The court allowed three extensions of military rule in Mindanao even long after the military had defeated the militants and retook the city.

“The martial law case is so weird because they dismantled all the checks that we put under the 1987 Constitution. It’s actually easier now to declare martial law anytime. In its ruling on the extension, wala ka nang check (there are no more checking mechanisms). [There’s] very limited judicial review,” Gatmaytan said. 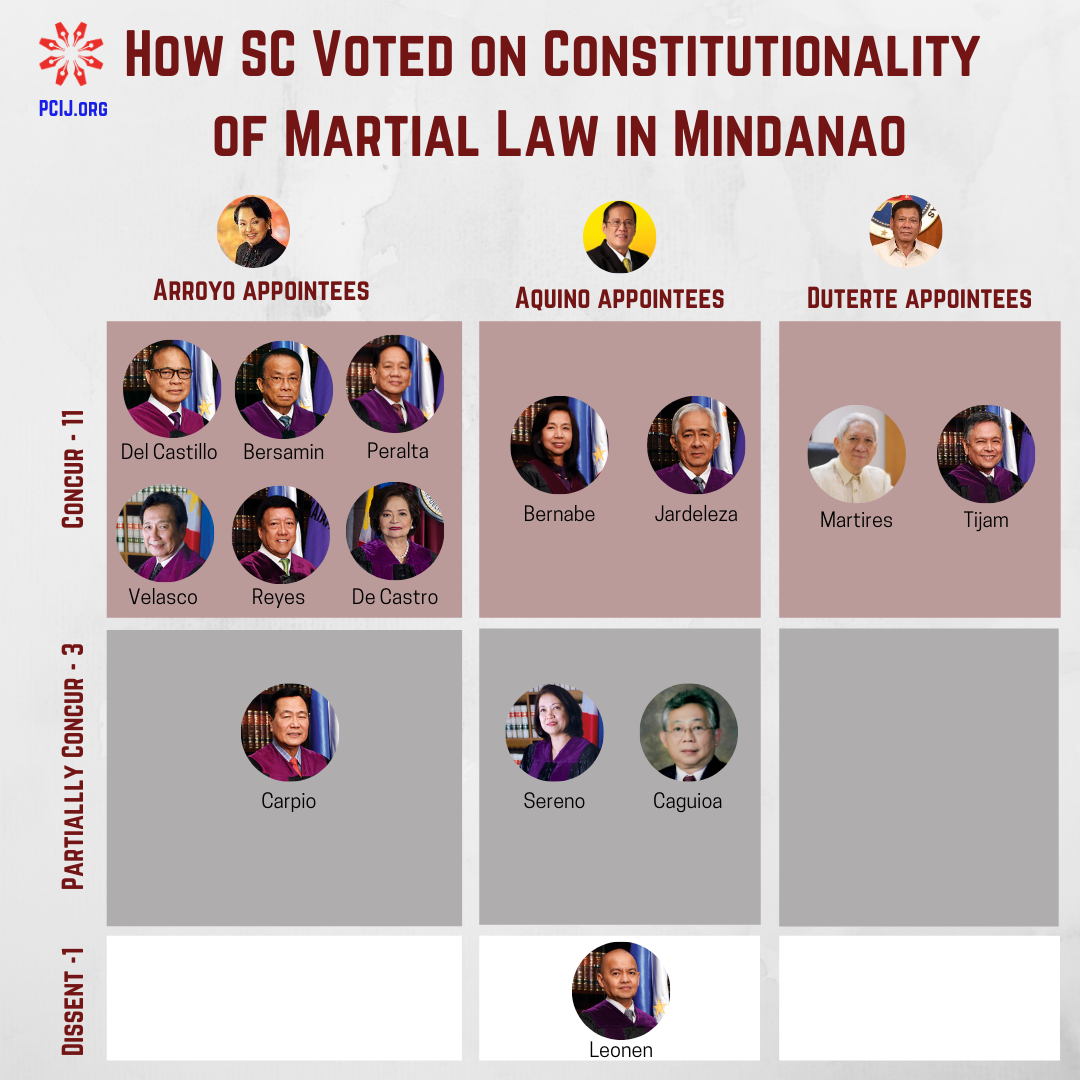 The high court dismissed de Lima’s petition to invalidate the arrest warrant issued by the Muntinlupa Regional Trial Court on the ground of her position as senator, which she said gave the Sandiganbayan jurisdiction over her. 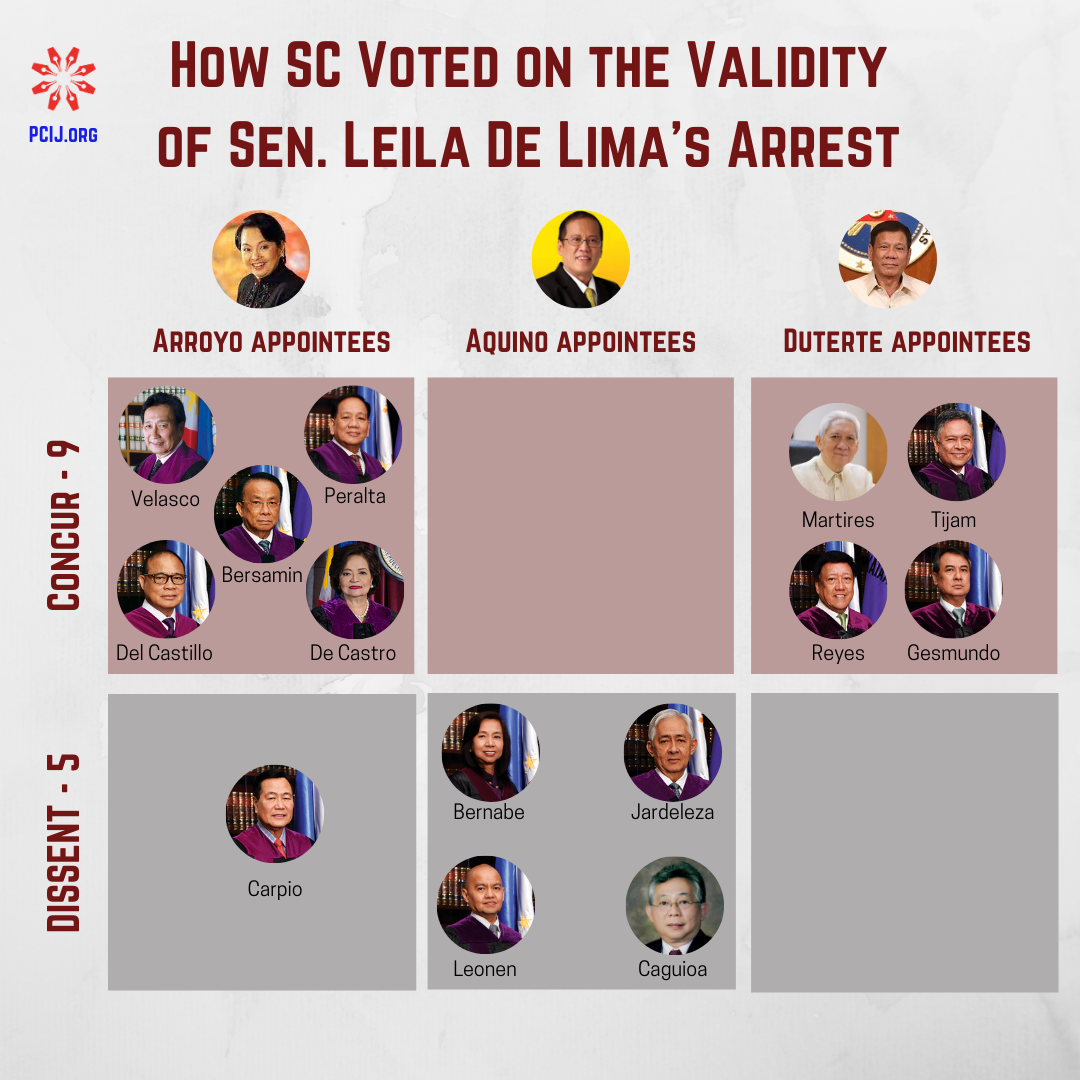 Groups also ran to the high tribunal as Duterte’s violent campaign against illegal drugs unfolded, killing thousands of Filipinos, mostly the poor. A petition to declare the drug war unconstitutional is still pending with the court.

“The SC has a role to play. It has always played an important role, but this time we would like to see the SC to be a beacon for justice,” Vitug said.

Instead, the court’s actions strengthened Duterte’s iron grip. Decision after decision favoring Duterte has been “a blow to democracy,” said Vitug, as the high court failed to protect the people against Duterte’s attacks on freedoms, institutions, and the rule of law.

“The context has changed under Duterte. Democracy is under threat. Our freedoms are under threat, and extrajudicial killings have taken place,” said Vitug.

The Supreme Court can push back.

Despite its record of obeisance, the high court during the extended term of Arroyo stepped out of its traditional decision-making role to take up the cudgels against extrajudicial killings (EJKs) and impunity.

Then Chief Justice Reynato Puno convened stakeholders to discuss EJKs in high-profile conference, calling attention to the problem and the need to stop it. It wasn’t just talk. It led to the writ of amparo, writ of habeas data, and the writ of kalikasan – legal remedies that allowed the public to run to the Supreme Court for protection order.

“I remember at that time, the court was explaining that they are maximizing the rulemaking power of the SC under the constitution… Those were innovations that the court tried to address specific situations,” Manuel said.

The violence of those times harks back to the country’s current situation.

The high court can revive its efforts against impunity, said Manuel. It would help if the Supreme Court were “more visible insofar as taking position on this issue.”

It can also send instructions to lower courts to act promptly on illegal drug cases.

“I’m sure they know all these things are happening. Some of these issues are brought to their attention formally through manifestations, through cases,” said Manuel.

Gesmundo should exercise leadership, said Vitug. “The chief justice, just like any other justice, casts only one vote. But he’s the face of the court and regarded as the intellectual leader. He has persuasive powers.” – with research from Martha Teodoro

Next: Part IV. Reforming the JBC