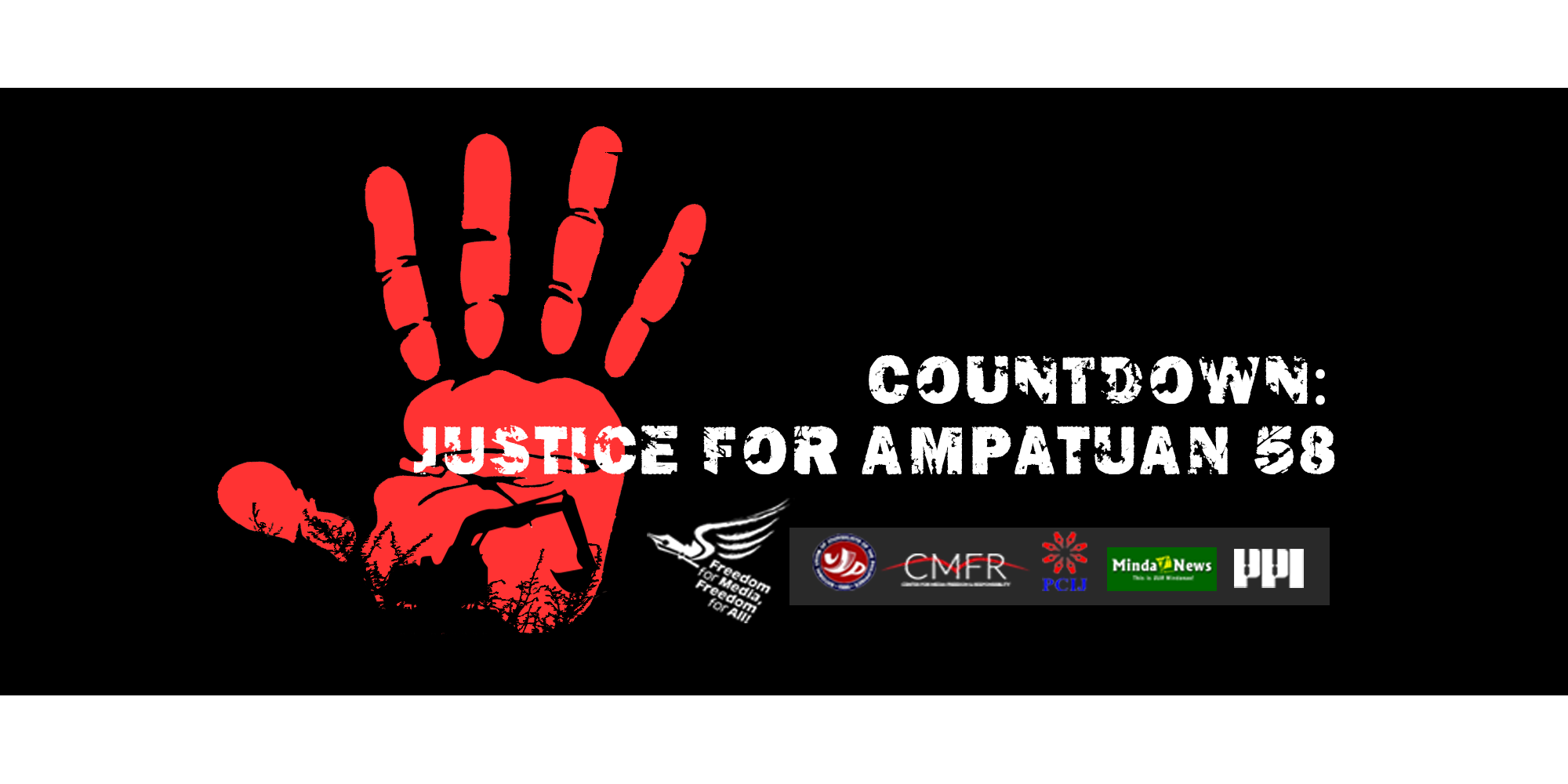 STATE OF MEDIA FREEDOM IN PH

Fraught still with attacks and threats -- that is the sorry state of media freedom in the Philippines under the Duterte Administration. It highlights the unyielding reign of impunity, even as the nation awaits next week the promulgation of judgment on Dec. 19, 2019 of the Ampatuan Massacre case of Nov. 23, 2009 that claimed the lives of 58 persons, including 32 journalists and media workers.

THE STATE OF MEDIA FREEDOM in the Philippines under the Duterte Administration  remains a tragic story as new and more cases of attacks and threats continue, with marked uptick for certain incidents.

The situation highlights the unyielding reign of impunity, and the shrinking democratic space in the country, even as the nation awaits next week, Dec 19, 2019, the promulgation of judgment on the Ampatuan Massacre case of Nov. 23, 2009 that claimed the lives of 58 persons, including 32 journalists and media workers.

After over nine years of trial, Judge Jocelyn Solis-Reyes, presiding judge of Branch 221 of the regional trial court of Quezon City, will decide on the case that has been described as the “deadliest strike against the press in history.”

From June 30, 2016 to Dec. 5, 2019, or in the last 41 months, 154 incidents of attacks and threats against the news media had been documented jointly by the Center for Media Freedom and Responsibility (CMFR) and the National Union of Journalists of the Philippines (NUJP).

The 154 cases include 15 journalists who had been killed under the Duterte Administration even as cases of intimidation and online harassment registered the highest numbers, by category of incidents.

By the numbers, here are the cases of attacks and threats on media freedom in the Philippines covering the period from June 30, 2016 to Dec. 5, 2019. Some numbers/data may have changed from previous reports after some cases, upon further investigation/consolidation of data, were proven to be not work-related.

Sixty cases of attacks were made against online media -- the highest by media platform -- apart from 41 cases against radio networks, 33 against print media agencies, and 15 cases against television networks.

Of the 154 cases, at least 69 had linked state agents -- public officials from the Executive and Legislative branches, uniformed personnel, and Cabinet appointees of President Duterte – as known or alleged perpetrators. Of these 69 state agents, about half or 27 are from national government agencies.

Luzon  island logged the biggest number of cases at 99, including 69 in Metro Manila alone. Mindanao logged 37 cases, and the Visayas, 18.

In the last six months, however, the most disconcerting and fastest rising numbers of attacks and threats include: 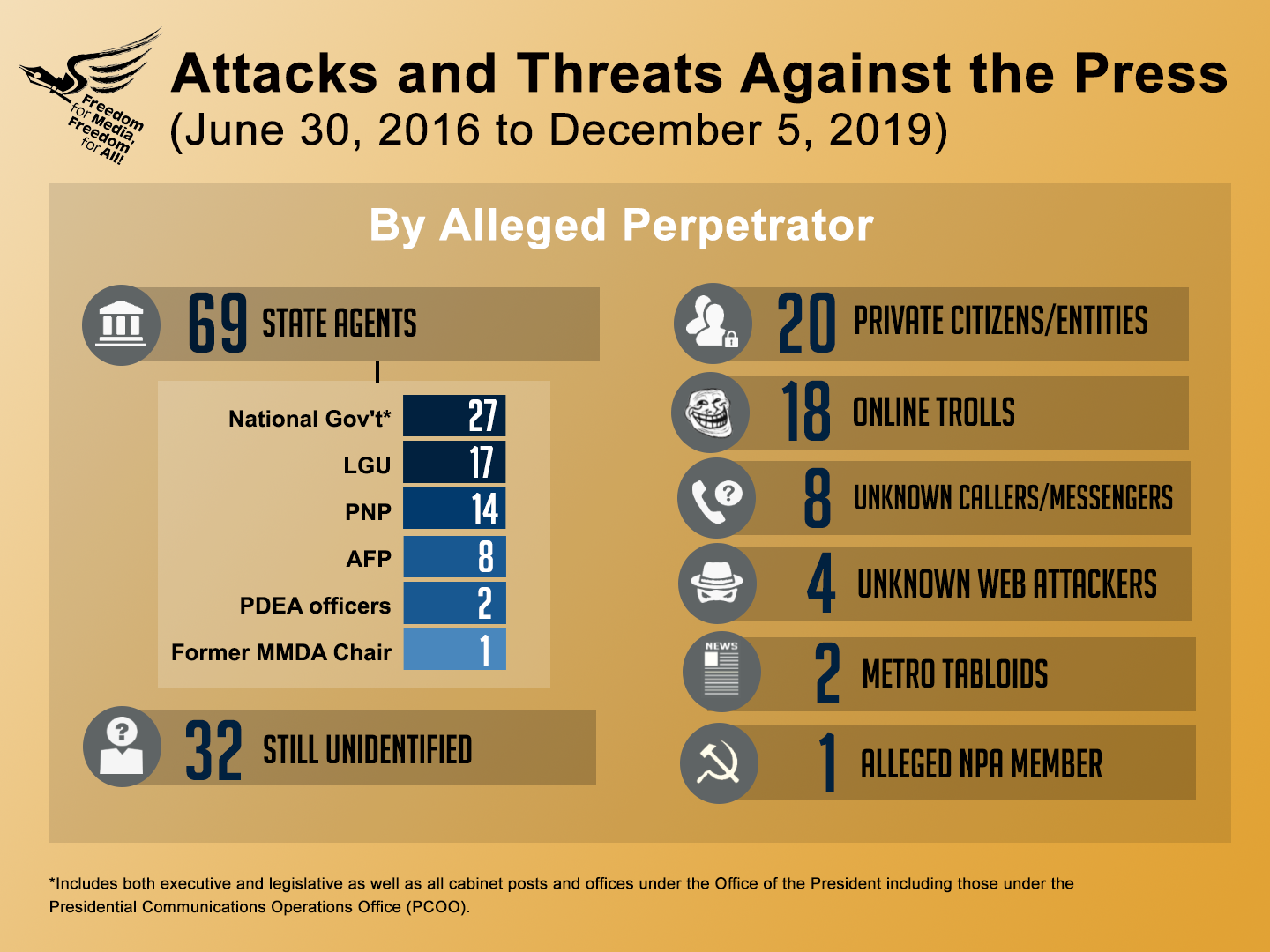 More cases of red-tagging or red-baiting of journalists by police or military officers or their intelligence assets and allies have been reported.

• On Nov. 4, 2019, in an interview with the anchors of “The Chiefs” program of TV5, Lorraine Marie T. Badoy, undersecretary for New Media and External Affairs, tagged the National Union of Journalists and other media personnel as so-called fronts of Communist Party of the Philippines-New People’s Army. “Are they or are they not part of the CPP-NPA? They are,” Badoy said. Asked if she was saying that these groups are fronting or are part of terrorist organizations, Badoy replied, “Unequivocally. Yes.” Badoy added, “I just don’t want a reporting. I want a clear and unequivocal denunciation of the human rights violations of the CPP-NPA.”

In a statement, NUJP said that Badoy clearly painted the NUJP as enemies of the state. “This is essentially an open call for state forces to threaten, harass, arrest, detain and kill journalists for doing their job,” NUJP said.

“Clearly,” added NUJP, “the intent of this red-tagging spree and all other assaults on press freedom is to intimidate the independent media into abandoning their critical stance as watchdogs and become mouthpieces of government.”

A report by SunStar said that in a Facebook post, Soto denied the accusation in no uncertain terms.  “I cannot accept this label or tag because I am neither a communist nor a terrorist,” the report quoted Soto as saying. “I am a professional TV station manager and a Kapisanan ng Brodkaster ng Pilipinas (KBP)-licensed TV broadcaster. I have never allowed CLTV36 or any of its shows to be a mouthpiece for anyone advocating terrorism or to raise arms against government in the course of my work as a broadcaster and general manager of CLTV36.”

“As a matter of fact,” Soto added, “like all TV stations, we use a standard disclaimer to caution the viewers should anyone among the guests in a TV show utter words that may be misconstrued as reflective of the Management’s views on a specific topic being discussed. Please know that I am concerned for my safety.”

Soto, a student leader at the Lyceum of the Philippines, was a signatory to a 1982 agreement between the League of Filipino Students and the Ministry of National Defense that bars state security forces from entering state universities.

The incident allegedly happened during a “Situational Awareness and Knowledge Management” briefing, which he described as “pursuant to the mandate of NICA in implementing Executive Order 70 calling for the creation of a National Task Force specifically in the adoption of a National Peace Framework to end the local communist armed conflict,” according to those who were invited to the event.

On multiple occasions, various state agents and pro-Duterte groups have tagged independent and critical journalists and media agencies as supposed fronts or supporters of the leftist and communist groups, via social-media posts and in press statements. 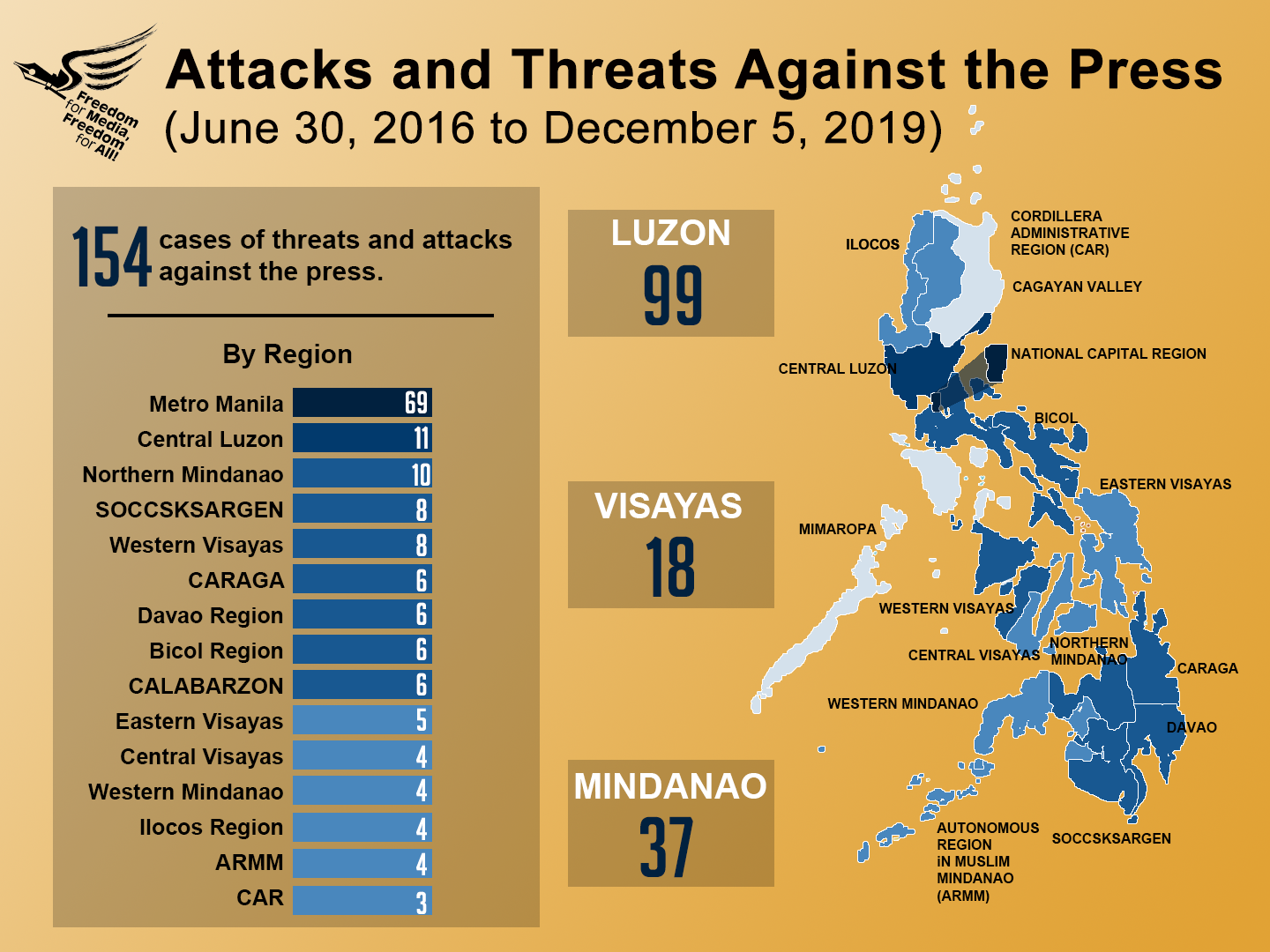 Statements by military officers and forums conducted by the National Intelligence Coordinating Agency (NICA) in the regions compel journalists to sign off to a “Manifesto of Commitment” declaring their “wholehearted support and commitment to the implementation of President Rodrigo R. Duterte’s Executive Order No. 70 to the Regional Task Force To End Local Communist Armed Conflict."

The Philippine Star reported that Parlade had accused reporters of being “biased and of colluding with communists” when they failed to carry the statement made by Brig. Gen. Edgard Arevalo, AFP spokesperson, about the writs of amparo and habeas data that the Supreme Court had granted the National Union of Peoples’ Lawyers.

“These media are allowing their government to be punched and bullied without giving it an opportunity to air its side, or more appropriately, to express the truth,” Parlade had said. The reporters “do not want to expose the truth about these front organizations” of the Communist Party of the Philippines, Parlade added.

The Defense Press Corps said that not one of its members carried the AFP’s statement because “it was, to put it bluntly, a rehash of a written statement he issued three days earlier.” It stressed that DPC is an organization “indebted to no one—not to the AFP, the Department of National Defense, the NUPL, the left and other state and non-state actors.”

“It is a very unfortunate that MGen. Parlade, who is supposed to bridge the gap between the AFP and the ordinary people as the military’s top civil military operations officer, is shooting the messenger by falsely and randomly accusing DPC members of transgression on our core values,” the reporters said, adding that Parlade’s intention of spreading his letter in social media is questionable.

“To be accused of bias, merely by not carrying a stale statement, sends a chilling message to media practitioners to parrot the military line or else, be discredited,” the Defense Press Corps said. – Freedom for Media, Freedom for All Network, 10 December 2019

Until they were charged with the murder of 58 persons on Nov. 23, 2009, the Ampatuans lived in mansions, traveled with a retinue of armed escorts in a convoy of black SUVs, flew business class, and in the first days of their detention, enjoyed catered meals.

From 2002 to 2008, COA reports had scored huge expenses for what could have been identical projects in Maguindanao and ARMM, under the Ampatuans. The reports painted a sorry picture of how one powerful clan could have dipped into public coffers, willfully and wantonly, as if these were its personal purse.