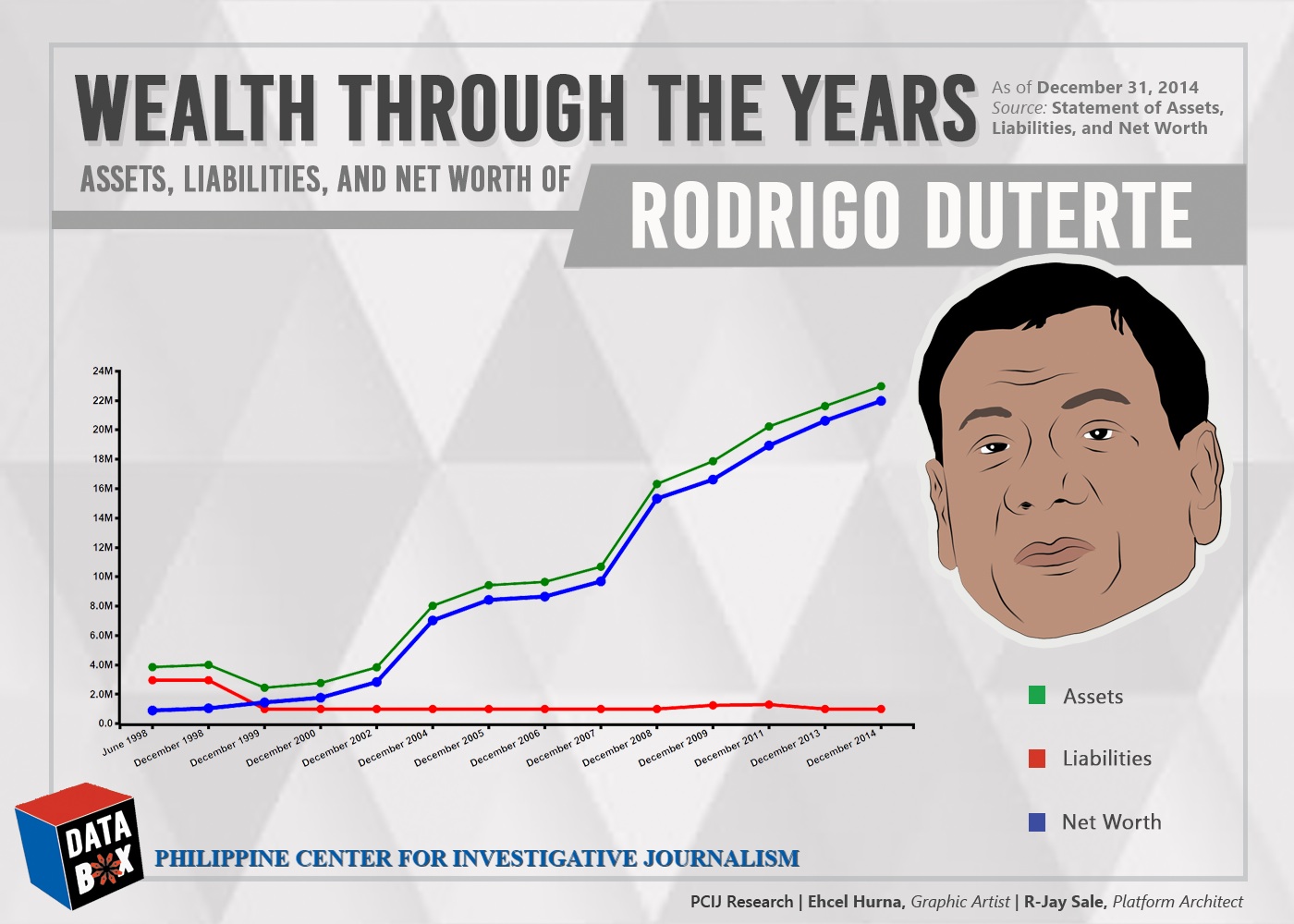 The earliest SALN Duterte had filed that is on PCIJ’s archives is for the year 1997, in which he declared a net worth of only P897,792.

In an earlier report this week on Duterte’s SALNs, PCIJ had noted, among other things, that Duterte’s net worth and “cash on hand/in bank” have charted an upward trek in the last two decades, save for one year.

But recent press interviews with Duterte have revealed a few more details previously unknown about his wealth, or which do not seem to be included in his SALN filings.

For one, Duterte told reporters last week that he has a dollar savings account with “about $5,000,” money that he said he had saved from an overseas trip he took many years ago. No dollar values in his “cash on hand/in bank” had ever been enrolled in Duterte’s SALNs.

For another, Duterte this week appeared in the late night TV program of his long-time friend and now ardent campaign supporter, Pastor Apollo Quiboloy. During the program, Duterte said Quiboloy, founder of The Kingdom of God, had given him three properties and two cars while he was mayor of Davao City.

“When I was mayor, Pastor bought three properties,” said Duterte. “He said, ‘I will buy properties for your children because if anything happens to you because of your work, if you die….’”

He said Quiboloy had also given him a Nissan Safari and a Ford Expedition.

Duterte did not specify the year – or years – when he became a beneficiary of Quiboloy’s generosity.

No Nissan Safari or Ford Expedition appears in Duterte’s latest SALN, although he listed a Nissan Patrol in his 2011 SALN. In his 2015 SALN, Duterte declared owning only two vehicles: a Toyota RAV 4 and a “Volks Sedan.” Duterte, however, had also listed “cars/motorcycles” in various SALN filings through the years, with total values that ranged from P1.2 million to P2.75 million.

Meanwhile, in his 2015 SALN, Duterte listed as his personal properties three lots in Bagong Aplaya, Davao City that he said he purchased between 1995 and 1997. But a second list of “other assets and personal properties, including those of the spouse and children below 18 years old,” Duterte enrolled a lot in Ma-a and a house and lot in Matina among other assets. He said he purchased the two properties in 1997-98.

Yet still on another page of his 2015 SALN, Duterte listed a third set of real properties that he noted were “purchased through the exclusive funds of (the mother of his 11-year-old daughter), Cielito S. Avancena.”

This third set of properties includes three lots — two agricultural and one residential — located in Matina, Malagos, and Catigan, all in Davao City; and two house and lots in Matina; Davao City.

In 2006, his SALN had this note: “All other lots previously declared were already transferred to the three children and to Elizabeth Zimmerman on May 24, 2006.”

(Zimmerman is Duterte’s first wife. In 1998, she filed a petition to nullify their marriage, and two years later, a Pasig trial court granted her plea. They have children, now all grown up: Paolo, Sara, and Sebastian.)

Duterte’s 2006 SALN, though, listed a new residential lot asset in Ma-a that he said was purchased in 1997. He did not put an acquisition cost for it, but imputed current fair market value of P42,570.

In 2008, Duterte declared real assets of P4.45 million, with an annex listing 15 pieces of real assets — all purchased — from 1996 to 2002, to represent “real properties and vehicles of declarant/spouse/declarant’s children below 18 years of age living in the household of declarant, regardless of amount.”

Among the 15 real assets on this list are two residential lots in Ma-a, and two in Matina.

On the SALN column for “kind of real property,” for the Matina lots, he put the name of his child by his second wife, with the notation “Residential Land.” At the time, the child was four years old.

The 2008 SALN indicates that one of the Matina assets was purchased in 2005 and had an acquisition cost of P350,000. The other was bought in 2007, but no acquisition cost appears in the document.

Two Ma-a and two Matina properties are also listed in Duterte’s SALN for the following year. The Matina lots are still in the child’s name, but this time around, one already had a different “mode of acquisition” entry: not “purchased,” but “exchanged.”

Properties in Ma-a and Matina with the same descriptions and notations would also appear in his 2011 and 2014 SALNs.

Aside from Quiboloy’s “gifts” of vehicles and pieces of property, however, Duterte has at least one more piece of real estate that should have appeared in his SALNs yet seems to be missing.

In recent weeks, Duterte has been fighting off accusations that he has bank accounts through which hundreds of millions of pesos have passed, as well as being the alleged owner of some 40 pieces of real estate. One of those properties – a townhouse in San Juan, Metro Manila — was apparently used as the address to open one of Duterte’s bank accounts in question.

Last week, Duterte’s youngest son Sebastian or Baste, confirmed to the Philippine Daily Inquirer that he had lived in the townhouse “when I was 13 years old, when I started schooling at San Beda. I did not know at the time that the property was in my name.”

Duterte was then a member of the House of Representatives but has not, then as now, declared the San Juan townhouse in his SALNs through the years.

Sebastian Duterte is now 28 years old and a father himself. Among Duterte’s grown-up children, he is the only political holdout, apparently choosing to surf and engage in business than having a seat in city hall.

Sara first served vice mayor to her father the mayor from 2007 to 2010. She later became mayor from 2010 to 2013 of Davao City, an apparent stand-in for Duterte, who had reached his three-term limit by then. Duterte himself became his daughter’s vice mayor.

In 2013, Duterte ran again and won again as mayor, with son Paolo as vice mayor. 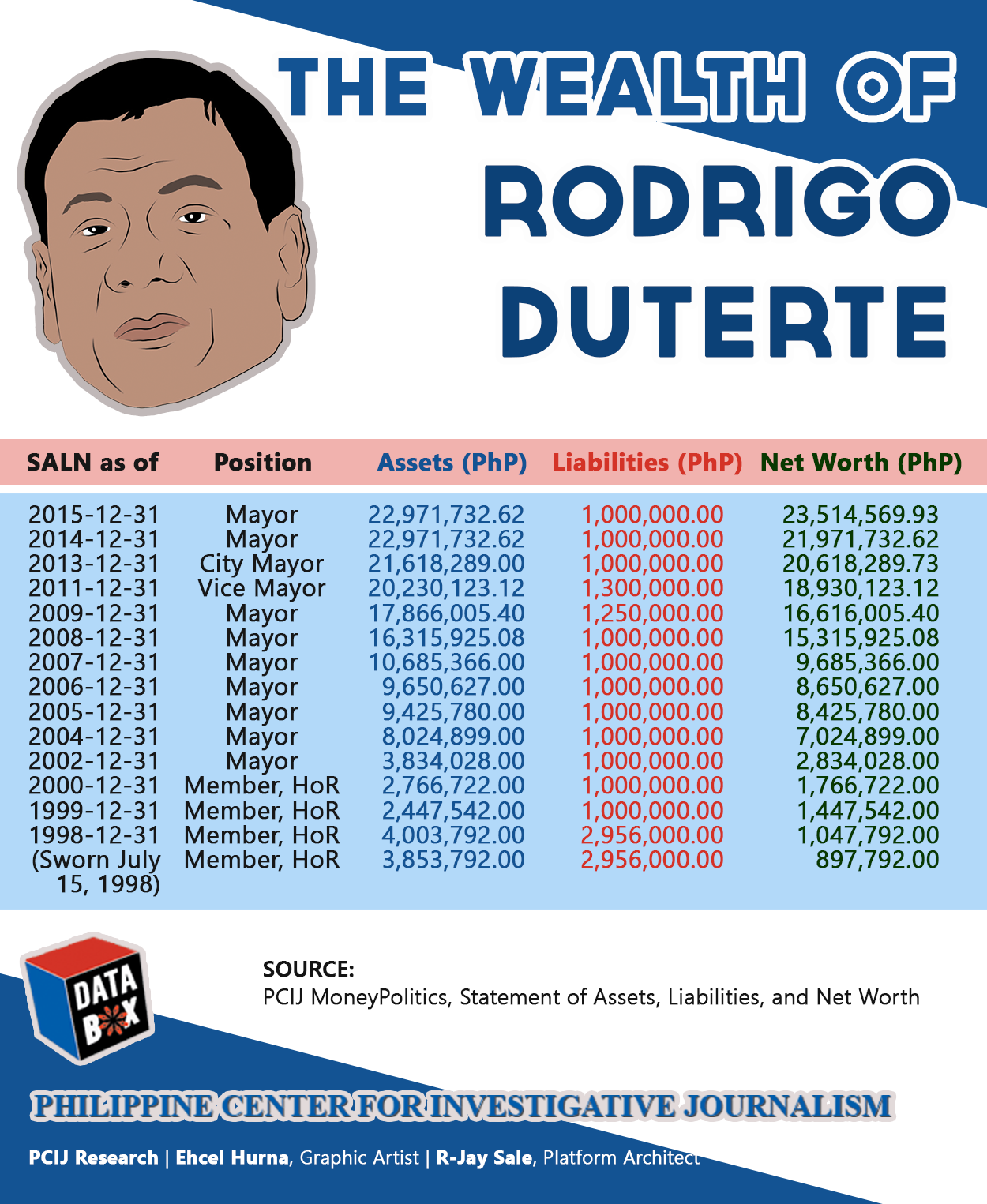 Both Paolo and Sara Duterte first assumed political posts in 2007 – Paolo as barangay captain and Sara as vice mayor. Based on their SALNs, both siblings were already involved in a few businesses by the time they entered politics. Aside from these, though, Sara and Paolo appear to have worked mostly in politics (although Sara, a lawyer, had a brief stint working at the Supreme Court).

Even while he was serving as vice mayor, Paolo maintained business interests in and financial connections with five entities based in Davao City, one in Manila, and one other in Laguna.

Sara, for her part, declared in 2007 SALN a net worth of only P7.25 million — assets of P9.25 million minus liabilities of exactly P2 million.

As mayor in 2011, Sara’s SALN showed a dip in her net worth by nearly P4 million, on account largely of bigger liabilities. She put her net worth that year at P14.27 million — assets of P21.82 million minus liabilities of P7.55 million.

By 2011, Mayor Sara had acquired, apart from the three listed above, business interest in four more entities: