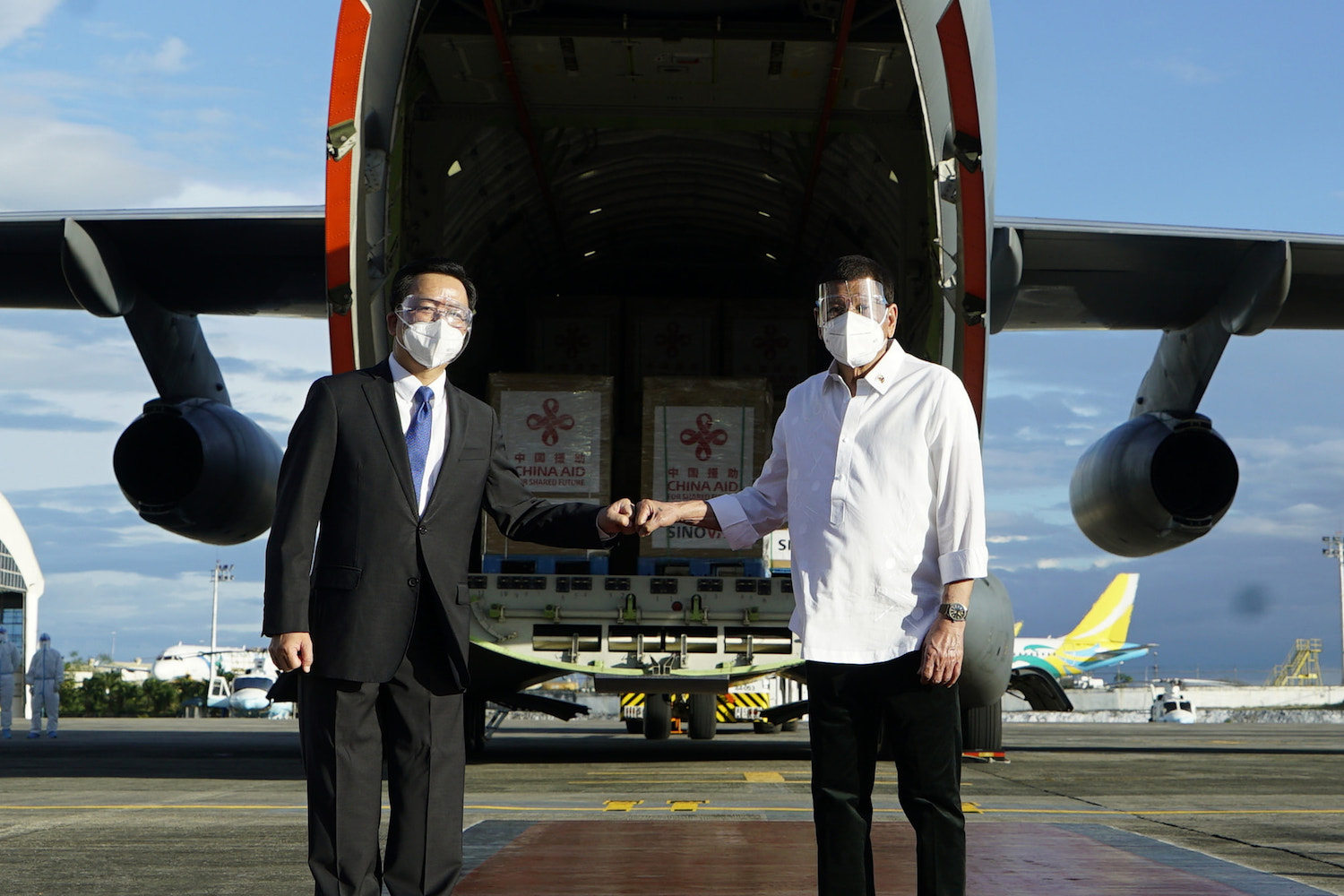 The arrival of 600,000 doses of a coronavirus vaccine from China on Feb. 28 signals the start of public inoculations in the Philippines, the last Asean country to do so. Health workers are pushing back against the Chinese vaccine, however. In the West Philippine Sea, the military is also pushing back against Chinese aggression.

Combating Covid-19 is the leading item in the bilateral agenda of the Philippines and China, but concerns are growing against the neighboring superpower’s aggressive actions in the West Philippine Sea, including continued construction on a Philippine reef and passage of a new law allowing its coast guard to fire on foreign vessels.

“As a result of the pandemic, the cooperation between the Philippines and China in combating Covid-19 has assumed critical importance in the bilateral relations. As a matter of fact, it is now the leading item in the bilateral agenda,” Philippine ambassador to China Jose Santiago “Chito” Santa Romana said on Feb. 25 in a Zoom forum on the country’s vaccine strategy and diplomacy, hosted by think tank Asia Pacific Pathways to Progress Foundation.

The Philippines began public inoculations against Covid-19 with the arrival on Feb. 28 of 600,000 doses of donated vaccines from China. Manufactured by Sinovac, the vaccines were granted by the Philippine Food and Drug Administration (FDA) emergency use authorization for clinically healthy individuals aged 18 to 59. 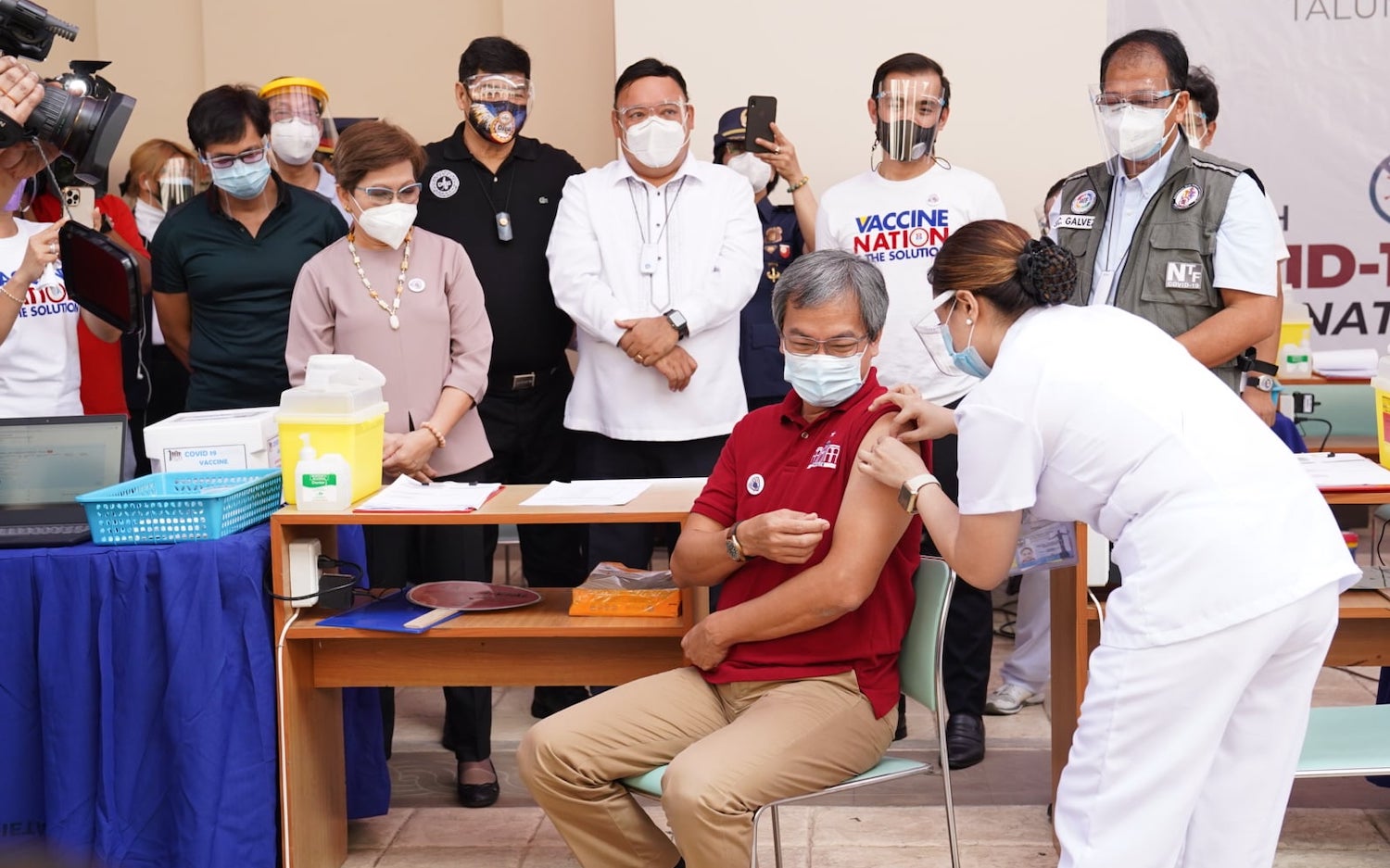 The pandemic saw the Philippines turning to China for medical supplies, including test equipment and PPEs (physical protective equipment). The Philippine Air Force flew more than 70 flights to China in the past year to pick them up, according to Santa Romana.

“The prospects for closer cooperation in vaccines with China are indeed bright given the deepening friendly and cooperative relations between the two countries. This is also part of the independent foreign policy pursued by the Duterte administration,” said Santa Romana.

The Philippines is the last country in Southeast Asia to start mass vaccination against the coronavirus pandemic. However, vaccines smuggled from China were administered last year to members of President Rodrigo Duterte’s protection escorts and reportedly to over 100,000 Chinese workers in the country, flouting laws and prompting widespread condemnations.

The disarray in the government efforts was exposed after Foreign Affairs Secretary Teodoro Locsin Jr accused Health Secretary Francisco Duque III of "dropping the ball" on negotiations to get US firm Pfizer to deliver vaccines to the country as early as January 2021. Duque denied it.

The Sinovac vaccines arrived as the country’s capital began to see infections rise to more than 2,000 cases daily compared with an average of about 1,600 a day in January after the holiday break. The pandemic has killed over 12,000 Filipinos.

Sinovac’s vaccines have been used in mass vaccination programs of several countries, including Indonesia, where President Joko Widodo has received two doses of the vaccine. In the Philippines, the Chinese vaccine was met it reservations, however, given its efficacy rate of 50.4% based on trials in Brazil. The FDA also didn’t recommend it for health workers caring for Covid-19 patients.

US firm Pfizer's vaccine has an efficacy rate of 94%.

Meanwhile, the pandemic did not slow down China’s advances in the West Philippine Sea.

US firm Simularity, which uses a software to scan large areas, has released satellite images showing signs of construction in several areas on Panganiban or Mischief Reef.

Among the structures that appeared on the reef was a “permanent cylindrical structure 16 meters in diameter” and a “large radome cover.” Simularity said these structures could be a fixed radar structure and an antennae mount structure, respectively. 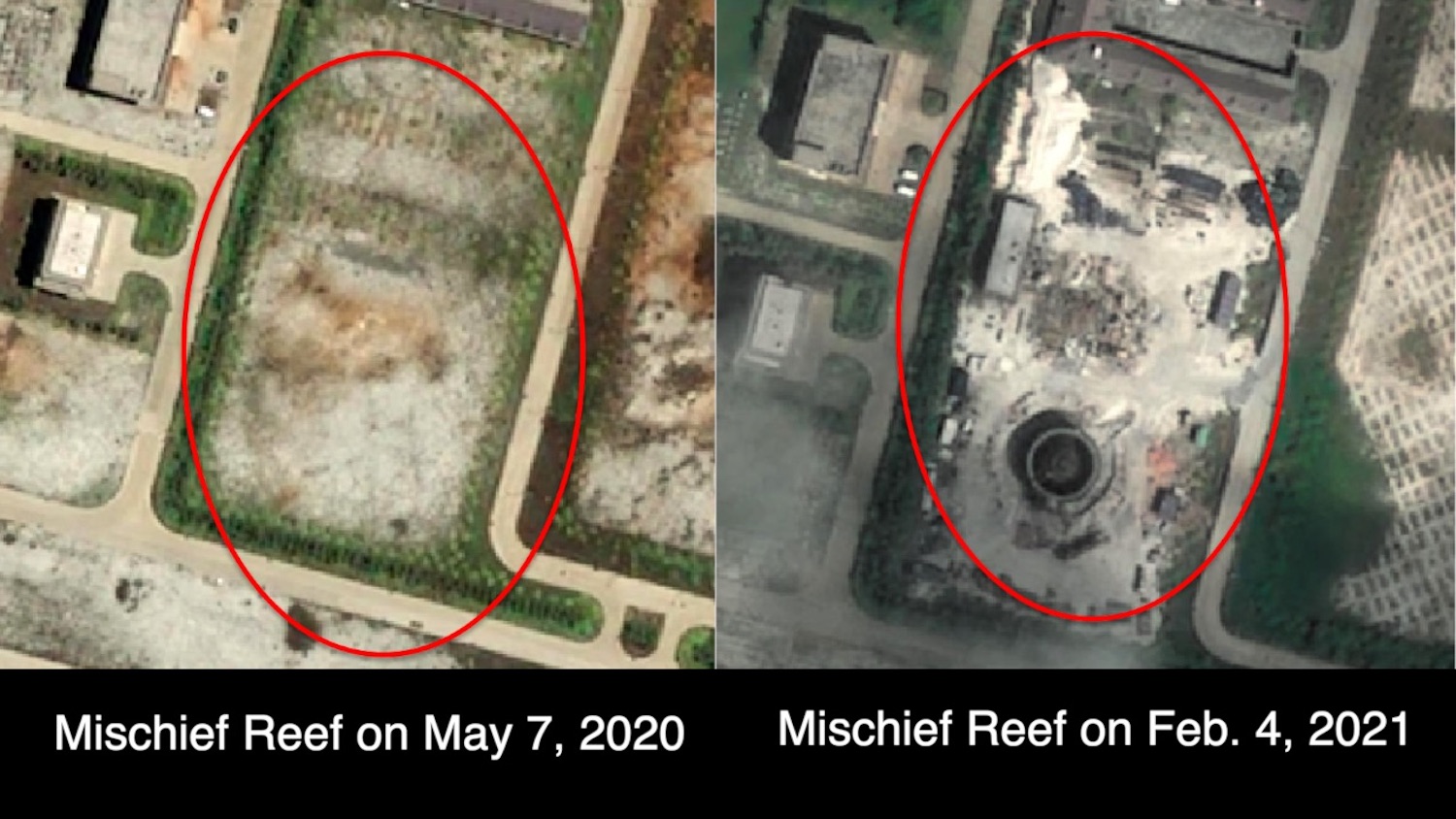 Panganiban or Mischief Reef is inside the Philippines’s 200-nautical-mile Exclusive Economic Zone or EEZ. The Permanent Court of Arbitration in The Hague affirmed the country’s sovereign rights over the reef in a historic 2016 ruling that also dismissed China’s sweeping claims over almost all of South China Sea.

Duterte set aside the ruling, however, to pursue closer ties with China. In February 2020, he also made good on his threat to initiate the termination of the Visiting Forces Agreement with the US, which allowed the rotation presence of American soldiers in the country. The process has since been “suspended” as both countries continued to discuss bilateral relations.

The Department of Foreign Affairs has fired diplomatic protests against  China’s activities in the West Philippine Sea, including the passage of a new law that allows its coast to fire on foreign vessels, even as it implemented Duterte’s pivot to Beijing.

Former Supreme Court senior associate justice Antonio Carpio said the new law allows armed aggression by China’s coast guard and violates the United Nations Convention on the Law of the Sea, he told Rappler in an interview. Carpio advised the Philippine government to file an arbitration case when China enforces the law and encouraged other Southeast Asian countries to do the same.

PH priority groups: 35 million Filipinos who will get the coronavirus vaccines first

‘Frontliners are doing the balancing act’

The country’s pandemic response is a distinct issue from national security, said retired Philippine Navy Vice commander Rommel Jude Ong. But there have been fears that the China will use the vaccines to put pressure on the country on issues such as the West Philippine Sea.

Ong noted how the medical frontliners and the Armed Forces of the Philippines (AFP) have been doing the balancing act against, referring to the pushback from health workers against the Chinese vaccines and military actions in the West Philippine Sea.

On the eve of the vaccine rollout, the Philippine General Hospital (PGH) Physicians Association said 95% of its residents and fellows didn’t want to be inoculated with Sinovac’s vaccine. They wanted the vaccine to undergo appraisal by the Health Technology Assessment Council, an independent advisory body.

Hospital director Gerardo Legaspi, the first medical frontliner to be vaccinated, tried to assuage people’s fears when the vaccine was rolled out on March 1.

“The balancing act is being done by the frontliners themselves. Look at PGH and AFP’s recent pronouncements. As to the West Philippine Sea, the chief of staff of the Armed Forces of the Philippines has issued statements to increase patrols [in the area] following the issuance of the Chinese Coast Guard law,” Ong said. 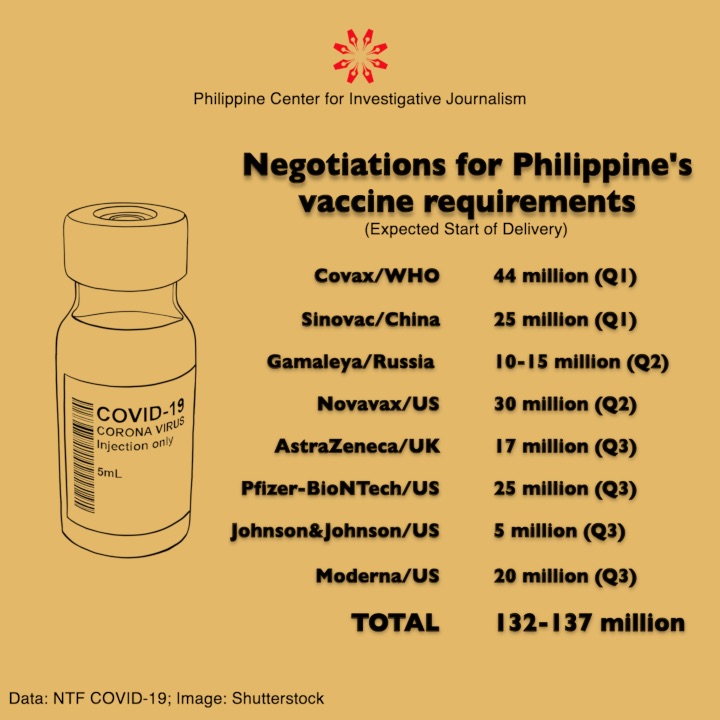 Despite Duterte’s push for China’s vaccines, the government’s ongoing bilateral negotiations show that US firms are poised to supply the majority of the country’s vaccine requirements.

Other than Sinovac, the Philippines is also expecting vaccines from the World Health Organization-led Covax facility, British-Swedish firm AstraZeneca, Russian firm Gamaleya and US firms Pfizer, Novavax, Janssen, and Moderna for nearly 140 million doses. It will be good for 70 million Filipinos, the target number to be vaccinated to achieve herd immunity against Covid-19.

“We are not favoring any one particular brand or country. The bottom line is we must secure as much as we can from as many pharma companies that have been able," said National Task Force for Covid-19 Response spokesperson Restituto Padilla in the same forum attended by Santa Romana.

"We will have a fair mix of vaccine options,” he said.