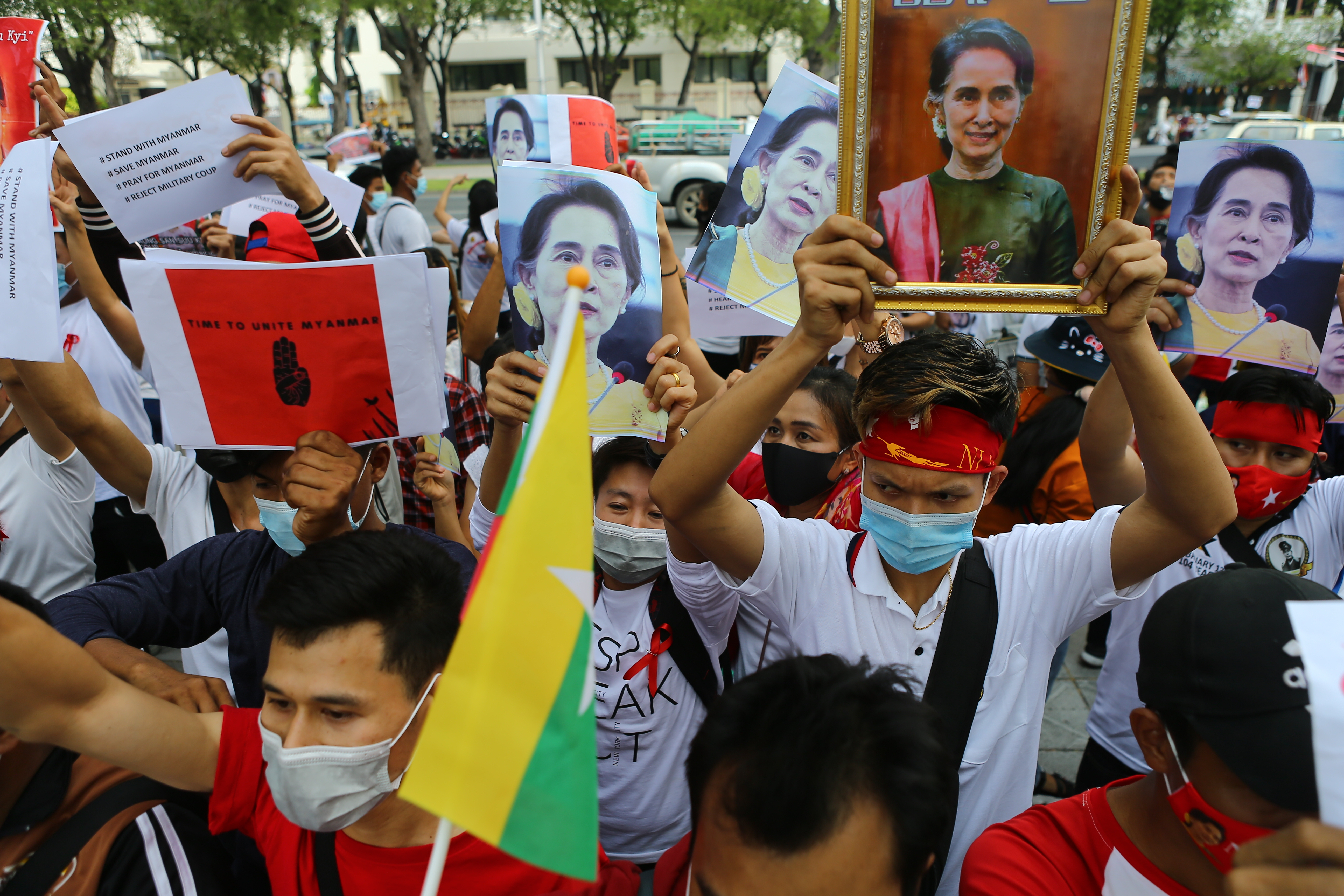 Myanmar people are on the streets protesting a military coup that removed their leader Aung San Suu Kyi, whose political party National League for Democracy (NLD) won a landslide election in 2020.

The military took power on Feb. 1, declaring a state of emergency  and detaining Aung San Suu Kyi and other NLD officials over allegations of election fraud. Power was handed over to General Min Aung Hlaing after 10 years of democracy.

PCIJ executive director Carmela Fonbuena spoke with Dr. Miemie Winn Byrd, a Myanmar-born former US army officer and an adjunct fellow at the research institute East West Center, about the situation in Myanmar.

Byrd noted how Myanmar millennials have used digital platforms to organize themselves and reach out to the international community, and how the military has not behaved so far like it did in 1988. She was referring to a violent chapter in the country’s history when the military opened fire on a student-led uprising on Aug. 8, 1988 or “8888.” Protests grew despite the deadly military crackdowns, paving the way for the rise of Aung San Suu Kyi, daughter of Burmese independence leader Aung San, who led calls for democracy.

“So far the military has not behaved like they [did] in 1988. The military seems to have an understanding of how times have changed from 1988 to 2021 because of the proliferation of social media and mobile phones. Everything that they do is –– in the real time –– being seen by the world, so that may have played into also the military being more measured at this moment,” said Byrd.

On Sunday, or a day after the Feb. 13 interview, tanks rolled into several cities in Myanmar and the Internet was reportedly cut overnight. The newly installed military government enacted a law amending the country’s privacy protection laws, which critics feared was a prelude to a crackdown on protesters. Demonstrators also returned to the streets on Monday.

Byrd said the Association of Southeast Asian Nations (Asean) might be able to help Myanmar if one of the countries would step up to facilitate talks between the military and Aung San Suu Kyi in the same way that Malaysia, for example, served as facilitator between the government and rebel group Moro Islamic Liberation Front in the successful peace talks that led to the creation of a new autonomous region.

Below are excerpts from PCIJ’s interview with Byrd:

Myanmar residents are on the streets protesting the coup. What can this achieve?

They really want to continue with democracy and the military regime is not aligned with democracy as they believe. That is why they are out there protesting, especially because they have tasted a little bit of freedom and the flavor of democracy for the last 10 years. I think they want to stay with that and they’re utilizing the freedom that is afforded by the system and they are using that right now. Of course, what they do alone in the country is probably just one element. I see the international community helping them in this effort. They are trying to help their voices heard around the globe.

It’s very interesting that so far the military hasn’t behaved like they [did] in 1988. They have not been shooting as they have done in 1988. The military seems to have an understanding of how times have changed from 1988 to 2021. Because of the proliferation of social media and mobile phones, everything that they do is –– in the real time –– being seen by the world, so that may have played into also the military being more measured at this moment.

I don’t know if it’s encouraging or not encouraging. It’s different. It’s different from 1988. The kids today who are protesting are different from the 1988 kids. Every time something happens in Myanmar, it’s usually the university students [who are involved]. They’re under 25 in age. Today’s under 25 –– Generation Z or the “millennials” –– they have a lot more capability when it comes to technology. They are digital natives and they are able to utilize the digital platforms to collaborate inside as well as to tell their story outside. They have gotten the whole diaspora mobilized outside of Myanmar. It is very interesting. It’s not 1988 anymore.

Countries have issued statements on the situation in Myanmar.

We don’t know [what will happen]. This is a very uncertain time. It can go many different directions. What I’m saying is it’s different from previous situations.

Will the military respond to international pressure?

I think that they considered it more. Like I said earlier, the fact that they’re taking a more measured approach at this moment could be a function of them considering international pressure.

Are there other pressures the military could respond to?

I don’t know if pressure would do any more, but maybe the international community can serve as a facilitator to get both sides to come together to negotiate more and talk about it. Maybe they won’t get everything they want from each side, but maybe [they could] compromise somewhere in the middle. I don’t know where that is, but that might be one way to do it. I don’t  know if it’s the best way. All I can say is these are possibilities….

Nothing is a guaranteed success. Both sides are very emotional. Both sides think they are both right so then maybe someone in the middle –– like the Philippines –– can bring them together to find some way in the middle.

What do recent developments say about the “democratic experiment” in Myanmar?

What is happening today is almost like a textbook case of the “J Curve” that Bremmer (Ian Bremmer, the American political analyst -Ed.) used to talk about. When countries are closed and authoritarian, they are more stable. But when they start to open up as a democracy then it starts –– like the letter J –– to get less stable. And then once you become mature, you make the curve at the bottom by building institutions and more capacities. It will turn and go up the long side of the J.

But many times, countries, when they get unstable, they tend to go back to the short end of the J because it’s easier. Building institutions and stuff like that is much harder. It always needs international assistance. But in the recent years, because of the Rohingya issues, the international community kind of backed off from helping Myanmar develop and get through that curve.

We also know from studies that young democracies are the most unstable form of governments until it becomes –– the longer side of J –– more stable. Like in the US, we had in January this whole insurrection that happened [in Washington, D.C.], but we’re able to stay on the long side of J because we have those institutions that are checking. Myanmar doesn’t have them yet.

How else can the international community help Myanmar?

The international community is wide. I would say some of the Asean countries that are more understanding of the Southeast Asian countries’ environment –– a country like the Philippines that went through a similar trajectory –– [can do something]. In the end, if it doesn’t work out and Myanmar becomes unstable, Asean countries are the first ones to be impacted.

During Cyclone Nargis in 2008, Myanmar did not accept any help from Western countries but Asean was able to help and they accepted it. So I think, again, maybe this time when one talks about the international community, it can be narrower and talk about Asean countries coming to the aid of Myanmar. Like I said earlier, [that country can be] more like a facilitator to see where somewhere in the middle they (the two parties) can meet.

[It can be] Asean as a group or any country within Asean that has the capacity and capability to serve as a facilitator. For example, in the southern Philippines issue, Malaysia [had been instrumental]. Maybe in the Myanmar issue, one of the Asean countries, even if it’s not the whole grouping, will be able to help both sides. — PCIJ, February 2021