Secure and digital -- two words that spell out what SD cards should exemplify. But in the May 2019 elections, 4,650 SD cards of the 85,769 units deployed were found to be defective, or did not work at all. This number is multiple times more than the 120 corrupted SD cards in the May 2016 elections.

A HANDFUL of the items delivered turned out to be not as good as they ought to have been --“a case of a few lemons.” That’s how Commission on Elections Spokesperson James Jimenez described the problem encountered with the Secure Digital or SD cards during the May 2019 Elections, noting that the units were also replaced and that the elections wasn’t compromised.

Jimenez added that the defective items were within the margin of error. For planning purposes, Comelec assumes a five-percent failure rate. “And we were about at two percent,” Jimenez said. “So we’re within the expected.”

This would be accurate if the Write-Once-Read-Many (WORM) SD cards are included in the total, but there have been no issues reported about these items so far. Each vote-counting machine or VCM contained two SD cards: (1) the main memory card that in the recent elections was supplied by the joint venture of Silicon Valley Computer Group Phils. Inc. and S1 Technologies Inc.; and ([2) the Write-Once-Read-Many (WORM) SD cards provided by Smartmatic. The ones found with problems were the main memory cards, which represents five percent of the total number of units deployed.

A total of 4,650 SD cards of the 85,769 units deployed were found defective, Comelec records show. Although relatively small compared to the total, the figure is far higher than the number of corrupted SD cards in the 2016 elections, which was just 120. The SD cards along with other technical glitches encountered on Election Day is said to have caused delays resulting in longer queues, deterring some voters to cast their votes.

The SD cards, along with the other election supplies and equipment, are now under “forensic investigation” by the Department of Science and Technology (DOST) and the Department of Information and Communications Technology (DICT), the third-party agencies commissioned by Comelec to determine the cause of the technical problems encountered during elections. In the meantime, all remaining payments, including the retention amount, due the concerned suppliers have been withheld by Comelec. 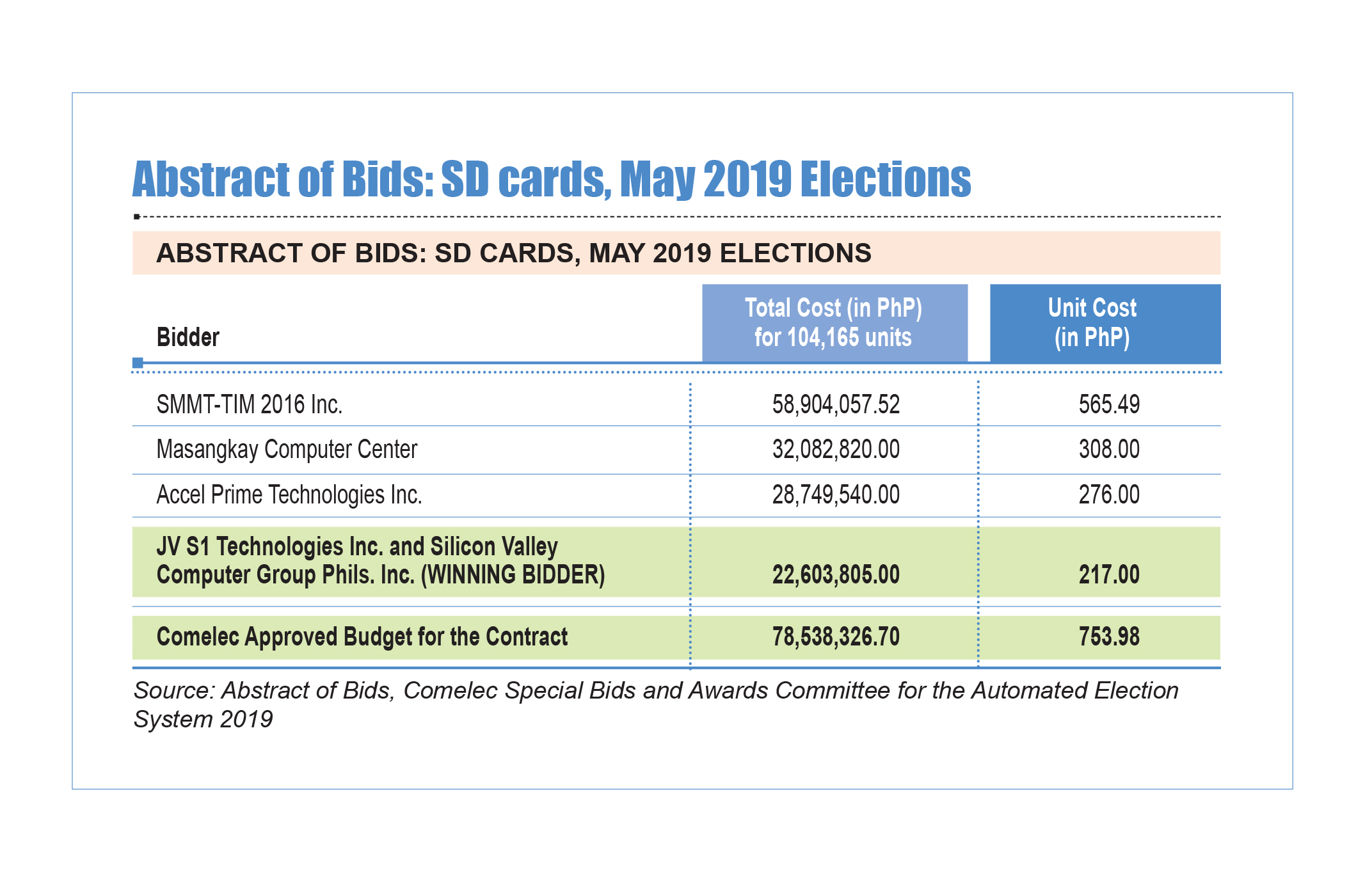 Comelec Commissioner Marlon Casquejo, who initiated for DOST and DICT to examine the items, said that the winning bid price for SD cards already raised a red flag as the price was too low, which might have led to items of low quality.

The poll body budgeted PhP78.54 million for the acquisition of 104,165 units of the SD cards at PhP753.98 apiece. Four companies participated in the procurement with fairly low bids, except for Smartmatic (SMMT-TIM 2016 Inc.) which made a bid at PhP58.9 million. The other three entities submitted bids that were less than half of the approved budget for the contract (ABC), with the joint venture of Silicon Valley Computer Group Phils. Inc. and S1 Technologies Inc. winning the contract. The joint venture bidded PhP22.5 million for the SD cards or PhP217 per unit.

A contract is awarded to a bidder after being declared to have the lowest calculated and responsive bid. The lowest calculated bid is determined by ranking the total bid prices from highest to lowest. A bid is then found to be responsive if it passes post-qualification requirements wherein eligibility, technical, and financial documents are validated. 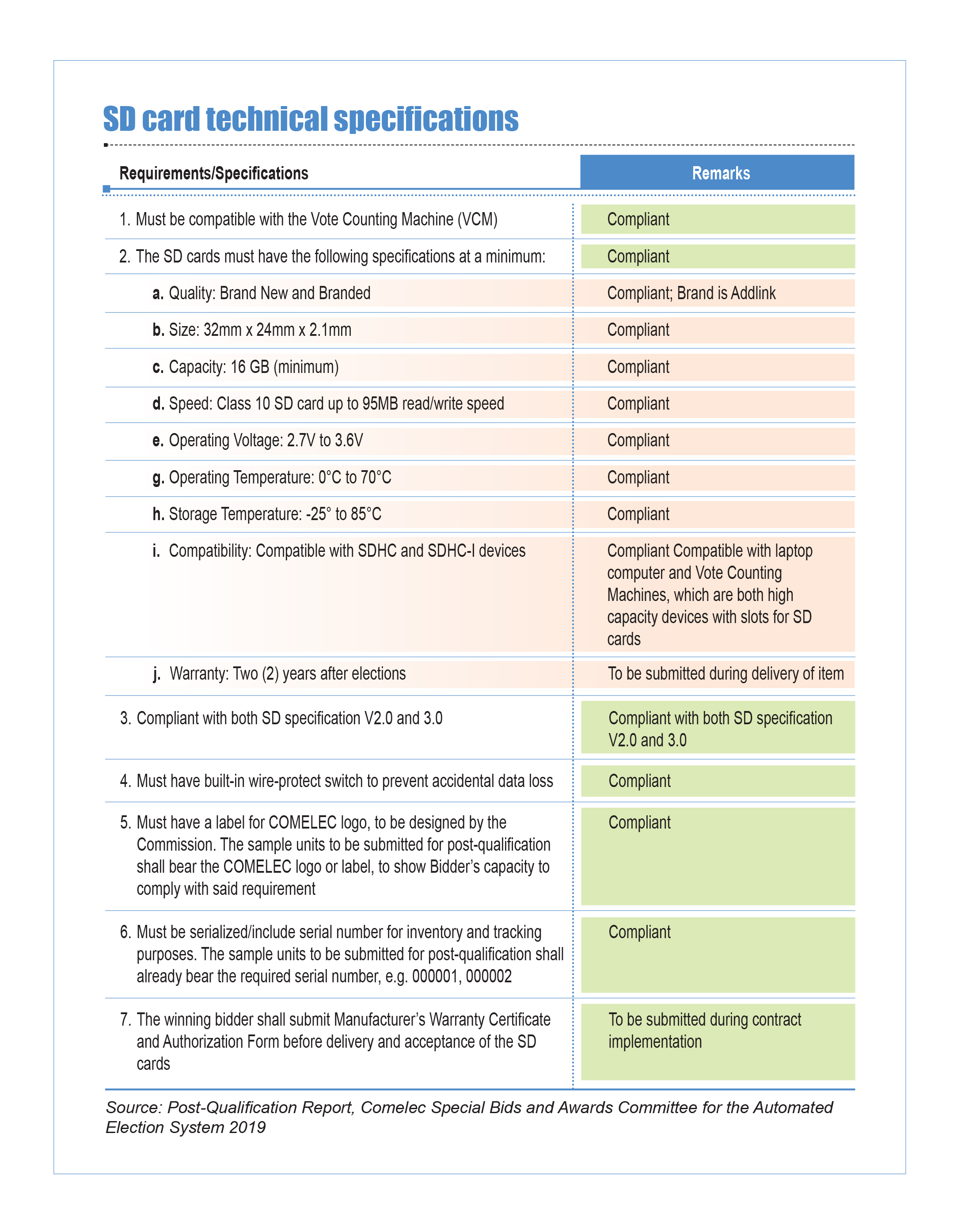 Although he had issues with the supplier’s bid price, Casquejo said that the vote-counting machines did not require high-end SD cards, so he deemed it still advantageous to the government to get the items for a small price for as long as the bidder passed post-qualification.

Asked about Comelec’s relatively high ABC compared to the bids received, Casquejo said that the approved budget was based on market value surveyed by the poll body’s Special Bids and Awards Committee Technical Working Group. But he conceded that SD cards may indeed be bought at a much lower price especially when purchased in bulk. There are units worth more than PhP100 that are sourced from China, he said.

The joint venture of Silicon Valley Computer Group Phils. Inc. and S1 Technologies Inc., which posted the lowest bid, passed post-qualification in addition to several tests done on the SD cards that they would supply. 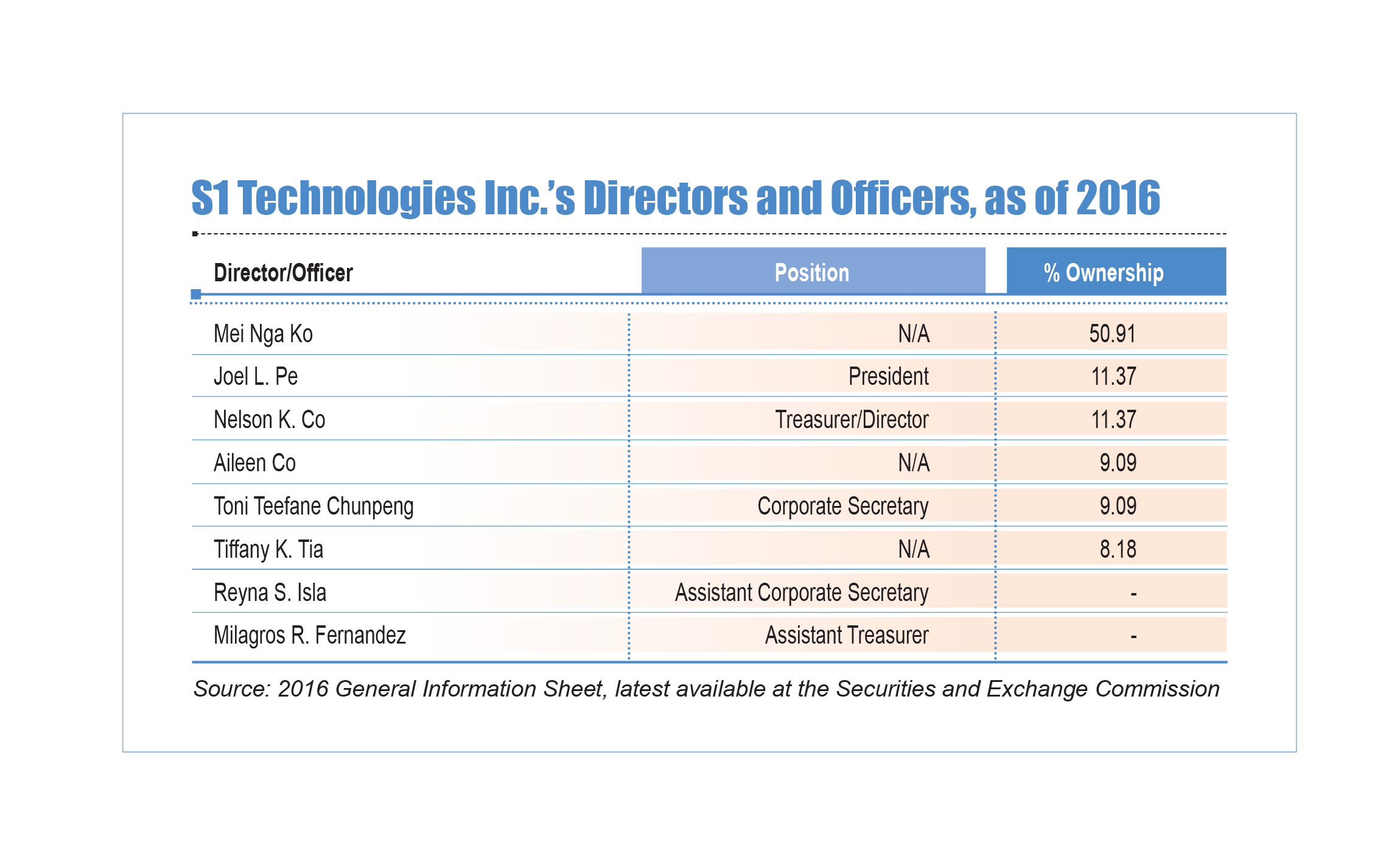 On its face, per Section 32, there is nothing wrong with two corporations who have interlocking directors to enter into a joint venture. The exception according to the provision would be "in cases of fraud, and provided the contract between the two corporations is fair and reasonable.”

Silicon Valley’s and S1 Technologies’ primary purpose is one and the same: “to engage in the business of trading of goods such as computer hardware on wholesale/retail basis and provide repair and after sale services.”

Information provided by Silicon to SBAC, however, shows that the company as of 2018 has a higher current asset value than its current liability.

The Technical Working Group’s post-qualification report on the bid of the Silicon Valley and S1 joint venture shows that the SD cards complied with the technical specifications.

A copy of the results of the test done by DOST to verify the SD card specifications also shows that the items complied with the speed, operating voltage, operating temperature, and store temperature requirements.

Comelec Spokesperson James Jimenez for his part said that there were people raising issues about the SD cards, including representatives of Smartmatic, the losing bidder. Smartmatic supposedly gave the poll body a position paper that essentially warned Comelec about SD cards because of some tolerances that must be considered. Smartmatic, Jimenez said, was reminding Comelec of what they should be looking for in an SD card.

PCIJ asked for a copy of the position paper, but Jimenez said that he could no longer find a copy. He commented, though: “Typical losing bidder schtick. So ‘yun ‘yung mga tolerances na pinag-uusapan diyan. If you're off by half a micron or something like that, then you're gonna have issues.”

But this created an “atmosphere of vigilance” with regard to the supply of SD cards, he said. This meant that the winning bidder had to go the “extra mile to demonstrate the capabilities of their SD cards and that's on top pa of the post-qualification,” Jimenez said.

Casquejo said that the SD cards also underwent a stress test in which 30 machines that had the SD cards inserted were fed with 1,000 ballots. Only one of the 30 failed, he said, and that was deemed acceptable.

The SD cards also underwent testing during the road shows conducted by Comelec in early 2019, the pre-Logic and Accuracy Test (Pre-LAT) around April 2019, and the final testing and sealing conducted six days before Election Day.

Jimenez also referred to another separate testing where several lots were picked out at random from the delivered items and then tested. Out of 100, two experienced problems, he said. Comelec then considered this good enough within the tolerance of failure, said Jimenez.

Casquejo said that there could be a number of reasons that could explain why several SD cards were corrupted during the polls. For one, he said, there could have been compatibility issues, such that the writing speed might have been different from the required speed of the machines. This could be because the procurement of the items was unbundled, which means that the components of the automated elections were provided by different suppliers.

Another factor, Casquejo said, would be the age of the machines, which had been stored in a warehouse for three years. He pointed out, “Nagkaroon ng hardware acceptance test (HAT) naman pero considering naman hindi siya ginamit for three years may factor talaga na baka sirain niya ‘yung SD cards. Baka biglang uminit kasi ‘yung mga SD card kapag mainit sisirain (Considering that the VCMs weren’t used for three years, there really is a factor that the SD cards may have been corrupted. Another possibility is the heat which might cause problems with the SD cards.)”

A third possible reason, he said, could be that the SD cards, which were already inserted in the machines, shifted or were dislodged during transit.