It's a case of two failed biddings, and then a third negotiated one. The procurement of ballot paper and marking pens as a bundled contract for the May 2019 elections was one that went wrong, very wrong.

THE supply of the ballot paper and marking pens used in the May 2019 Elections is a stark example of election procurement gone wrong.

The supplier responsible for the pens that bled and paper that felt thin was already initially disqualified for not meeting the specifications required of the pens. Yet still it ended up winning the contract in a negotiated procurement and with a 10-percent bump in the budget.

Procurement records and resolutions obtained by PCIJ tell the story of how this happened.

Comelec conducted the bidding for the items as early as Aug. 24, 2018, to allow enough time for delivery and deadlines for the printing of the ballot, mock polls, road shows, and various tests related to the automated polls. In this bidding, only one firm, Triplex Enterprises Inc., submitted a bid and was thus declared the bidder with the single calculated bid.

A contract is awarded to a bidder after being declared to have the lowest calculated and responsive bid. As the lone bidder, Triplex automatically moved to the post-qualification stage wherein bid responsiveness is tested. A bid is found to be responsive if it passes eligibility, technical, and financial requirements.

During the SBAC’s post-qualification on Aug. 29, however, the Technical Working Group (TWG) found that the sample marking pens submitted by Triplex did not comply with the required technical specifications. Triplex submitted a chisel-type pen branded Monami and a bullet-type pen branded BEIFA. Comelec required pens with a “flattened nib.”

“Obviously,” the SBAC wrote in its resolution, “the samples submitted by Triplex did not comply with the technical specifications required in Bid Bulletin No. 1, i.e., flattened nib with the capability to make a circle stamp of at least 3 mm and maximum 5 mm of diameter, in one single contact with the paper.”

This particular requirement was even among the issues clarified in the pre-bid conference conducted by SBAC on Aug. 1, almost a month before the post-qualification of the first bidding was held. (A pre-bid conference is a forum wherein the procuring entity’s representatives and prospective bidders discuss the legal, technical, and financial components of the contract to be bid.)

SBAC then declared Triplex as Post-Disqualified, and requested Comelec En Banc for authority to proceed with the second round of bidding.

PCIJ sought comments from the Comelec SBAC to understand why Triplex submitted chisel-type and bullet-type pens when the requirement were pens with a flattened nib as this seems like an obvious mistake. Likewise, PCIJ wrote a letter to Triplex to get its comments on the issue of the bleeding marking pens. Both parties have yet to respond. 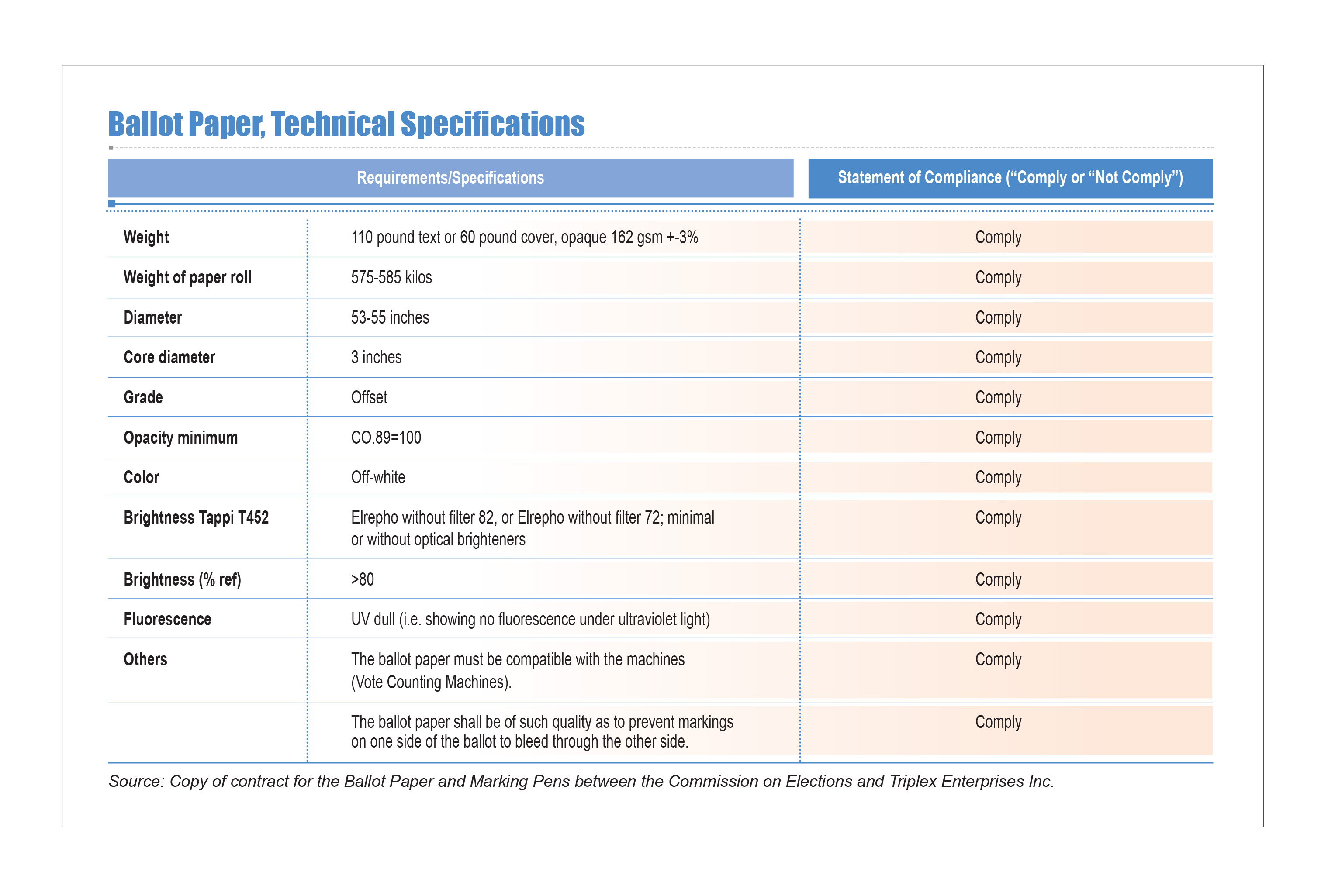 But Comelec Spokesperson James Jimenez said that he wasn’t surprised with what Triplex did as the poll body once had a bidder before who submitted a bid for just 50,000 units of vote-counting machines when the required number was 95,000. Jimenez recounted that the bidder apparently believed that only 50,000 of its units would be needed to accomplish the same task that would take 95,000 of anyone else's units to do.

Jimenez said that bidders do this sometimes because they really want to bid but can’t meet the need. “So they wanted to make a play,” he said. “Baka naman payagan. Baka pwedeng lumusot (Maybe it would be allowed. Maybe we would pass).And in many cases, hindi siya lulusot (they won’t pass).”

He added that another way to look at how things turned out is that it could be a strategy to force a failure.

Remarked Jimenez: “Suppliers (will say), ‘I can't produce flat-tip nibs so here's what we do: We bid every time, we bid wrong, they have to declare a failure of bidding. Eventually they are gonna go for a negotiated contract.’”

Although this is not the rule, he said, it certainly is one of the strategies Comelec has seen bidders do over the years. He also said that while there may be red flags, the decisions made by the SBAC are supported by documents. Jimenez said that he would presume regularity in the performance of their functions, which to him means that SBAC staff might have seen issues but they might have also seen extenuating circumstances.

The invitation to bid for the second tender was published on Sept. 21, 2018. Two days prior to this second round, SBAC conducted a pre-procurement conference to reiterate that the rebidding does not pertain only to the pen, but also the paper.

The bidding for these two items was bundled as one lot for the 2019 elections as a lesson learned from the 2013 polls when they were bidded separately. In 2013, the marking pens blotted and marked certain ovals that were unshaded. To ensure that the paper and pens were compatible, the two items were bundled in one contract, to be provided by one supplier.

A pre-bid conference was also conducted a week after the bid notice was published. Triplex Enterprises, GTK Trading, and Advance Paper Products attended the meeting, but none of them would later submit a bid. No bidder meant a failure of bidding, which then led the SBAC to request authority from the Comelec En Banc to either proceed with the third round or negotiated procurement. 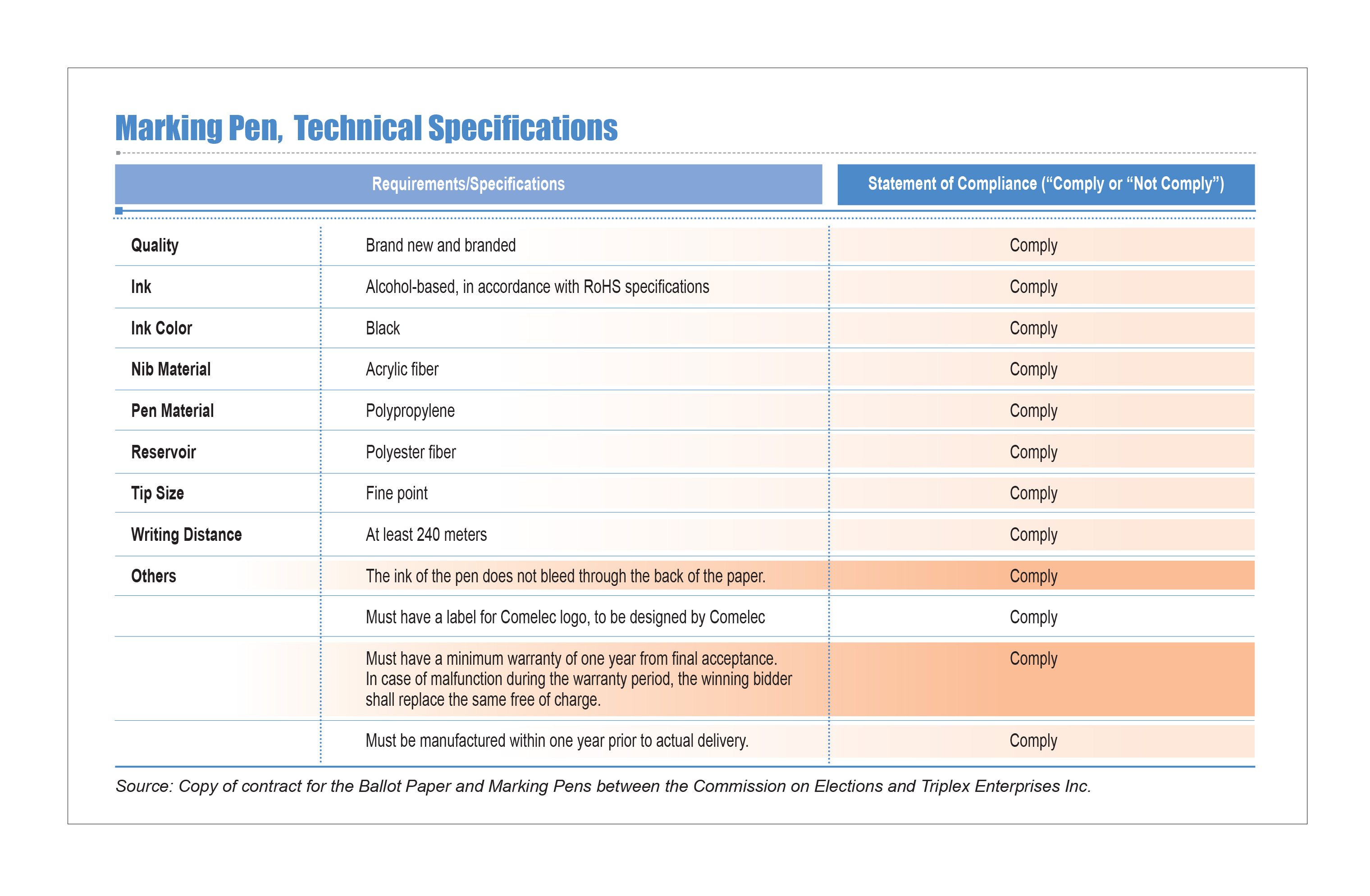 Comelec Commissioner Marlon Casquejo said the budget needed to be increased to entice bidders to participate in the third round. No bidder participated in the second round because the ABC, according to interested suppliers, was too low considering the time constraint. Bidders thus asked for the ABC to be increased to cover for the loss of time and because the paper will be sourced abroad.

The third bid notice was published on Oct. 26, 2018, three months after the very first bid was posted and two months before the ballot paper would be needed (December). In this round, three new requirements were added for the ballot paper: weight of paper roll, diameter, and core diameter.The specifications for the marking pens meanwhile changed with respect to the tip shape, which was the subject of contention in the first bid. From “flattened nib,” the required tip shape in the negotiated procurement became “fine point.”

PCIJ sought comments from the Comelec SBAC regarding this amendment. Comelec SBAC has not responded to PCIJ’s July 4, 2019 letter as of this writing.

A copy of the minutes of Comelec’s Oct. 30, 2018 pre-bid conference for the negotiated procurement reveals major concerns about the delivery of the ballot paper. The record states that the delivery of 21 rolls of ballot paper in November 2018 was vital because Comelec had scheduled activities in December 2018, including a field test on Dec. 12, a source code review on Dec. 14, and a mock election on Dec. 27.

The first two deliveries of the ballot paper were a main concern for the prospective bidders due to time constraint nearing the holidays. “The earliest delivery for the ballot paper can be done by end of December,” the minutes show. (See copy of pre-bid conference minutes.)

Too, the 10-percent increase in the ABC was apparently not enough for the bidders. The shipment of the first batch of paper via air freight and production that would have to be done on short notice would make the items very costly, they argued.

To address these concerns, Comelec said that it can assist the bidders and make the release of the shipments faster by coordinating with the Bureau of Customs. It also encouraged bidders to submit an offer even if they went beyond the ABC. 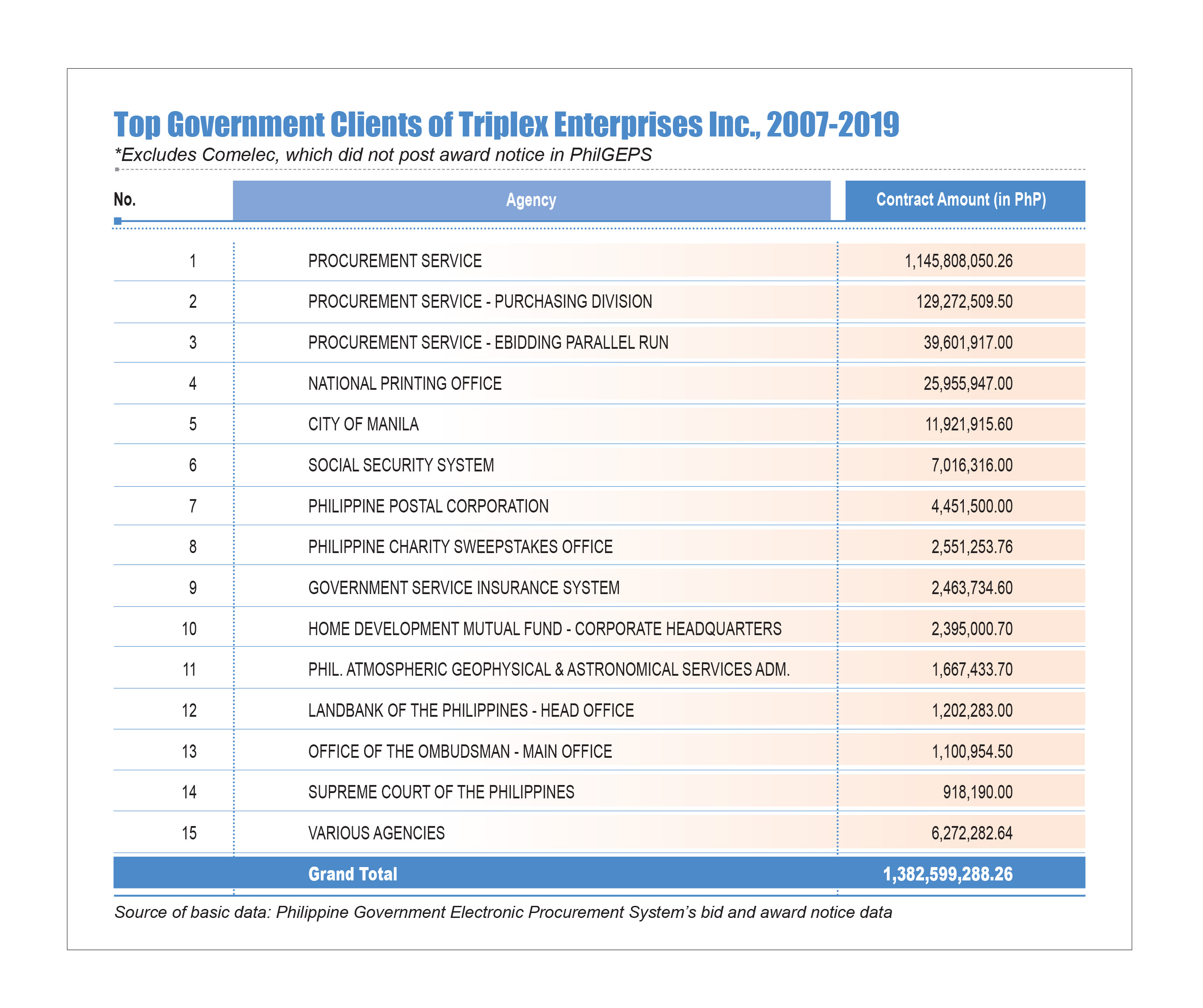 A copy of the contract between Comelec and Triplex shows that Triplex provided paper compatible with the VCMs and that “it shall be of such quality as to prevent markings on one side of the ballot to bleed through the other side.” The contract likewise shows that Triplex passed the requirement for the pen in which its ink does not bleed through the back of the paper.

The late procurement of the ballot paper led to the printing of the ballot to be moved by one week. In the Overseas Absentee Voting, paper from the 2016 elections was used. Comelec also had to send 2016 election materials (e.g. ballots printed using 2016 elections paper, marking pens, and SD cards) to Pro V&V, the International Certification Entity, for the functional tests it conducted in December 2018 in the United States. But Director Eden Bolo of Comelec’s Information Technology Department said that actual 2019 Elections supplies were used for the end-to-end tests that were conducted by Pro V&V at the Sta. Rosa Warehouse in January 2019.

“There were no problems encountered with using them in the tests, i.e. the ballots, SD cards and marking pens,” she said.

Still and all, the marking pens were found defective during the overseas voting held three weeks prior to the May 13, 2019 elections. A Comelec insider told PCIJ that field officers were instructed not to use the marking pens, and instead purchase ballpens to be used by voters.

Triplex was able to resupply new marking pens one week prior to elections, but several voters queried by PCIJ say that they did use ballpens on Election Day. A senior Comelec official also confirmed that ballpens were indeed used, in addition to marking pens bought for previous elections.

Casquejo could not say for sure what caused the marking pens to bleed, but he said that that the pens being newly refilled is one factor. Another factor, he said, is that some voters may have left the pen’s point too long on the paper, causing the ink to bleed through like any other regular marker would if left on paper long enough. But he noted that the actual cause is yet to be identified after the “forensic investigation” of the pens, along with the SD cards, vote-counting machines, and voter registration verification machines.