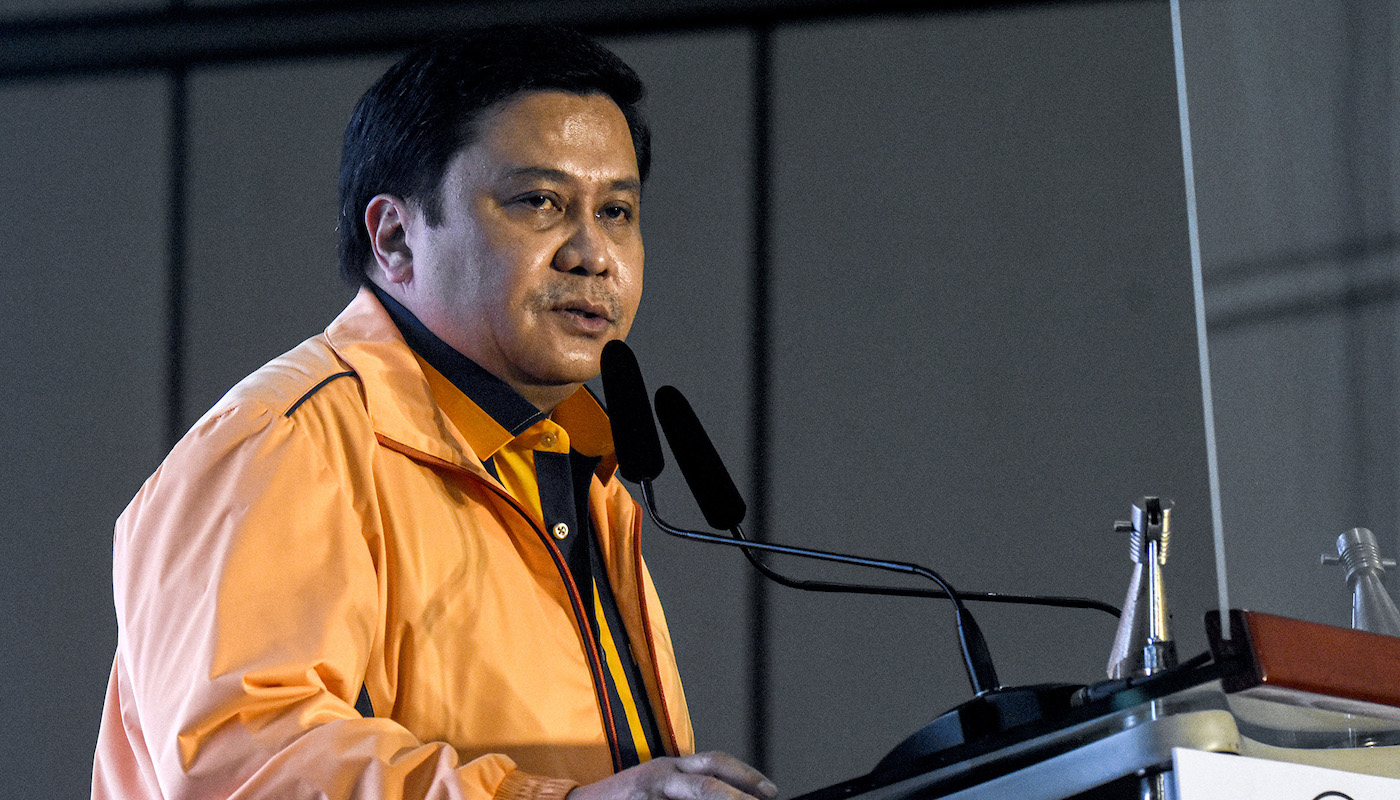 A senator made a big mistake, and for apparent ignorance of or indifference to campaign finance laws, it is one that possibly should even compel the Commission on Elections (COMELEC) to investigate and penalize him.

He could probably blame the reporting errors on his staff who prepared his SOCE yet still, Estrada signed and swore to the document’s accuracy and the COMELEC might do well to have Estrada explain the folly of his SOCE.

Estrada, a perennial candidate over the last 30 years, should find filing correct and truthful SOCEs a walk in the park by now. He has run and repeatedly won, and only once lost, as a candidate for San Juan City councilor, vice mayor, and mayor, and senator since 1989.

His political career did get disrupted, though, by the three years he spent in detention at the PNP Custodial Center in Camp Crame, for alleged plunder, a non-bailable offense. The anti-graft court Sandiganbayan had filed suit against Estrada for allegedly receiving PhP183.79 million in commissions from the pork-barrel syndicate led by Janet Lim Napoles.

A change in Sandiganbayan justices changed his fortune, however. In September 2017, the court reversed its earlier decision to keep Estrada in the slammer and allowed him temporary liberty after he posted a PhP1.33-million bail. In 2017, he disavowed plans to run for senator again, but in May 2022 ran again and won -- and filed a seriously flawed campaign-spending report.

Estrada reported that the country’s two largest television networks – GMA7 and ABS-CBN – gave him multimillion pesos in “contributions” as his top two “donors.”

In Form 2 (SCR) or “Statement of Contributions Received” of the SOCE that he submitted to the Commission on Elections (COMELEC), Estrada offered these data: 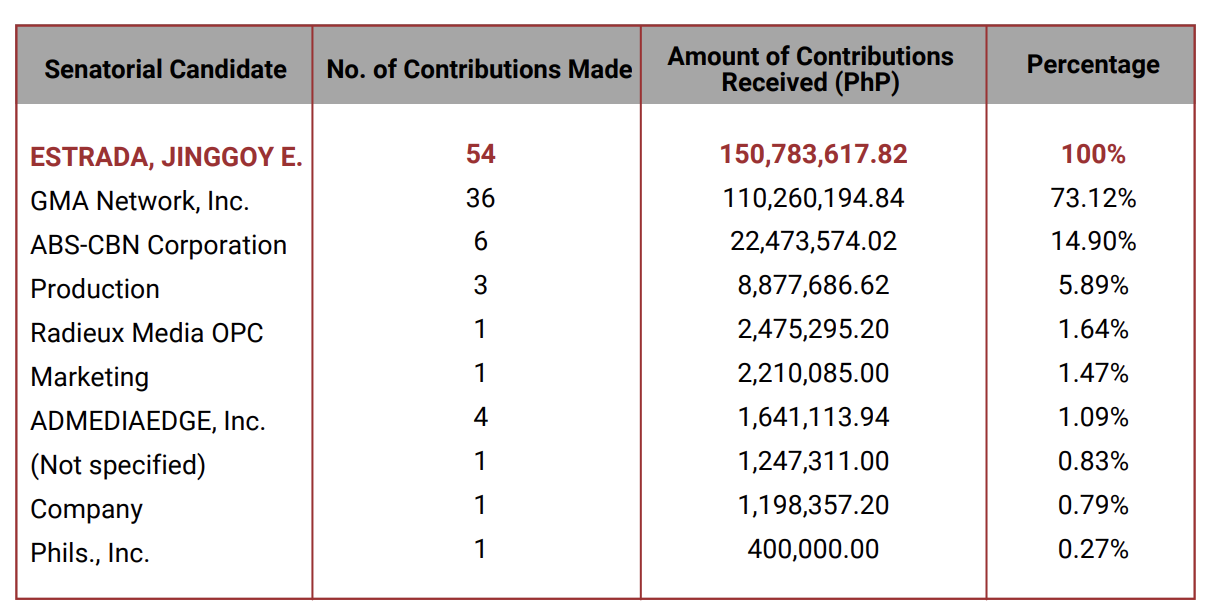 The two networks have flatly denied Estrada’s claims in separate statements requested by the Right to Know, Right Now! Coalition.

“We categorically deny that GMA has contributed to the campaign funds of Sen. Estrada for the 2022 National Elections. The Network takes to heart its ethos, ‘Walang Kinikilingan, Walang Kasinungalingan, Serbisyong Totoo Lamang.’ It has always upheld its non-partisan stand especially on matters of politics and as such, has never supported, and will never support, any political party or personality.”

GMA sent a list of 46 advertising contracts that Estrada and/or his political party, Pwersa ng Masang Pilipino (PMP), had placed with its television and radio stations altogether worth PhP109,098,399.56. The political ads aired during the campaign period from 8 February to 7 May 2022. The network also provided copies of advertising contracts signed by Estrada and his uncle and PMP treasurer Jesse M. Ejercito. The contracts are proof that Estrada and PMP paid for the ads and were donations from the network.

Curiously, the number and value of advertising contracts that GMA reported did not match what Estrada reported in his SOCE. Estrada said that GMA Network Inc. gave him fewer or only “36 contributions.” According to Estrada’s SOCE, they were worth PhP110,260,194.84 in total – or PhP1.16 million more than GMA’s quoted amount.

ABS-CBN also flatly denied Estrada’s claim that the network had extended PhP22.47 million in “contributions” to his May 2022 campaign.

“We would like to inform you that all contracts for political advertisements were paid by the candidates or third parties as indicated. The Company did not contribute or donate television advertisements to the campaign of Senator Jinggoy Estrada.”

In addition, Estrada said he incurred additional “expenditures” worth PhP23,272,318.11 that he said was “paid out of personal funds/resources.”

The grand total of expenditures he said he incurred came up to PhP174,255,935.85. This implies that the sums he said came from the two networks and seven parties and PMP could be one and the same.

Yet still, the amount supposedly from PMP that is reflected in Estrada’s SOCE is PhP20.7 million more than what the party said it contributed to Estrada’s campaign.

The confusion continues. Even if it raised only PhP130 million from three donors, PMP said it incurred expenditures of PhP150,783,617.74, or exactly the same amount that Estrada said he received from his party. Who and how the PhP20.7 million was sourced, PMP did not reveal.

In its SOCE, PMP said that it raised only a flat PhP130 million from three persons:

In accreditation documents it filed with the COMELEC on 16 June 2021 for the May 2022 elections, PMP named its officers thus:

Who is third donor?

PMP’s donor Javines does not appear as a senior PMP official. His name shows up in news and social media reports as the chief operating officer of Primecut Builders and Development Corporation, “a fulltime construction management and general contracting firm.”

Primecut is a licensed Triple A “General Building” and “General Engineering” company represented by Michelene Lucero Javines, as of the latest available list of licensed contractors of the Philippine Contractors Accreditation Board or PCAB. According to PCAB, Primecut’s license allowed it to secure government contracts until October 2021. But the firm is still listed as a registered contractor, as of the 27 October 2022 registry of the Department of Public Works and Highways.

The implications of the grave mistakes in Estrada’s SOCE are bad for him and the two networks. 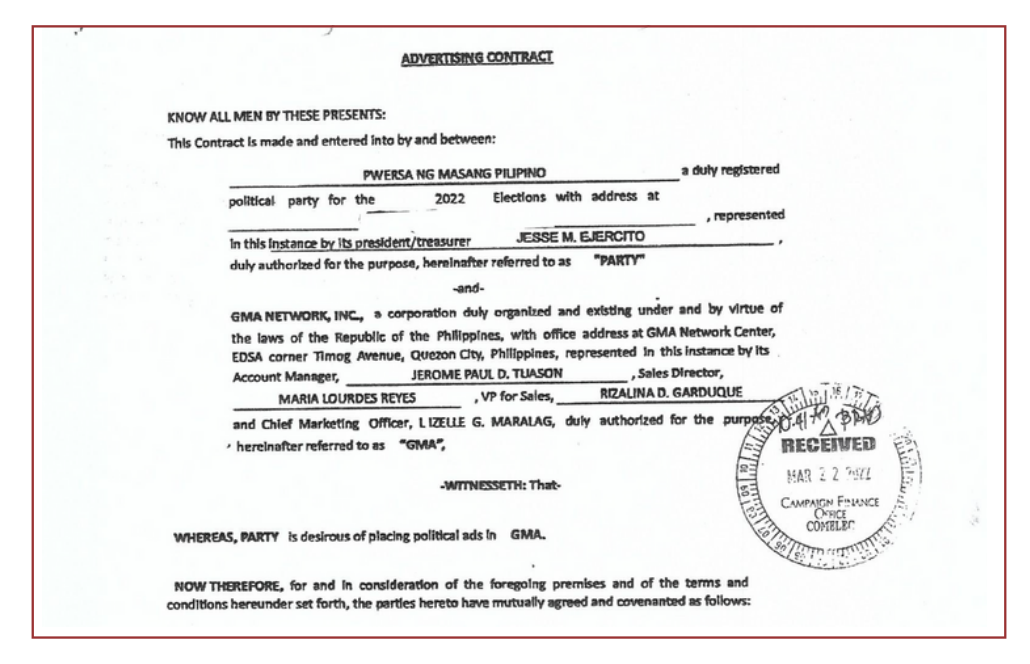 In Resolution No. 10772 dated 16 March 2022, COMELEC spelled out the rules and regulations governing contributions by domestic corporations for partisan political activities in connection with the upcoming May 2022 elections.

TV networks, as a rule, cannot and must not donate for being entities that have been granted franchises to operate.

Section 2 of COMELEC Res. No. 10772 lists prohibited contributions to the candidates or political parties from the following:

The COMELEC resolution, however, allows corporations incorporated under Philippine laws to make “reasonable donations” to any political party, party-list, candidate, or for purposes of partisan political activity. Such donation should not, however, exceed five percent of the corporation’s taxable income on a taxable year immediately preceding elections from trade, business, or profession. This is the same provision that appears in Section 35(i) of the Revised Corporation Code.

Who must pay taxes?

Estrada’s errors might also have tax implications for him and the networks he listed among his donors. If the two networks supposedly donated to Estrada, should they assume payment of the taxes due from the ads that Estrada and PMP had acquired from their own networks?

In Revenue Memorandum Circular No. 22-2022 dated 21 February 2022, the Bureau of Internal Revenue (BIR) reminded candidates and political parties that “all candidates, political parties/party list groups and campaign contributors, are required to register with the BIR, issue official receipts, and withhold taxes.”

The Circular states further that “Income payments made by political candidates and political parties/party-list groups on their purchases of goods and services as campaign expenditures, and income payments made by individuals or juridical persons for their purchases of goods and services intended to be given as campaign contribution to political parties and candidates shall be subject to five percent (5%) creditable withholding tax.”

According to BIR, “the following are considered among those covered by expanded withholding tax, but not limited to payments for: (a) media services, (b) printing jobs, (c) talent/entertainment fees, (d) rentals of both real and personal property/ies.”  BIR Form No. 2307 (Certificate of Creditable Tax Withheld at Source) shall be issued upon demand.”

It will be recalled that apart from Estrada, two other sitting senators at the time – Ramon ‘Bong’ Revilla Jr. and then Senate President Juan Ponce Enrile – had also faced plunder charges for receiving PhP124.5 million in kickbacks and P172.8 million rebates, respectively, from the Napoles pork barrel scam.

In July 2021, the Sandiganbayan cleared Revilla of all 16 counts of graft charges even as it convicted Revilla’s co-accused and former staff lawyer Richard Cambe. Cambe spent two years at the New Bilibid Prisons before he suffered a stroke and died in April 2021. Elected once more in May 2022, Revilla remains a senator until 2025.

In August 2015, the Supreme Court allowed Enrile to post a PhP1-million bail as it granted his petition for temporary freedom on account of his reportedly deteriorating health condition. Enrile, 98, now basks in freedom and has renewed influence as the Presidential Legal Counsel of President Ferdinand Marcos Jr. – Right to Know, Right Now! Coalition, November 2022