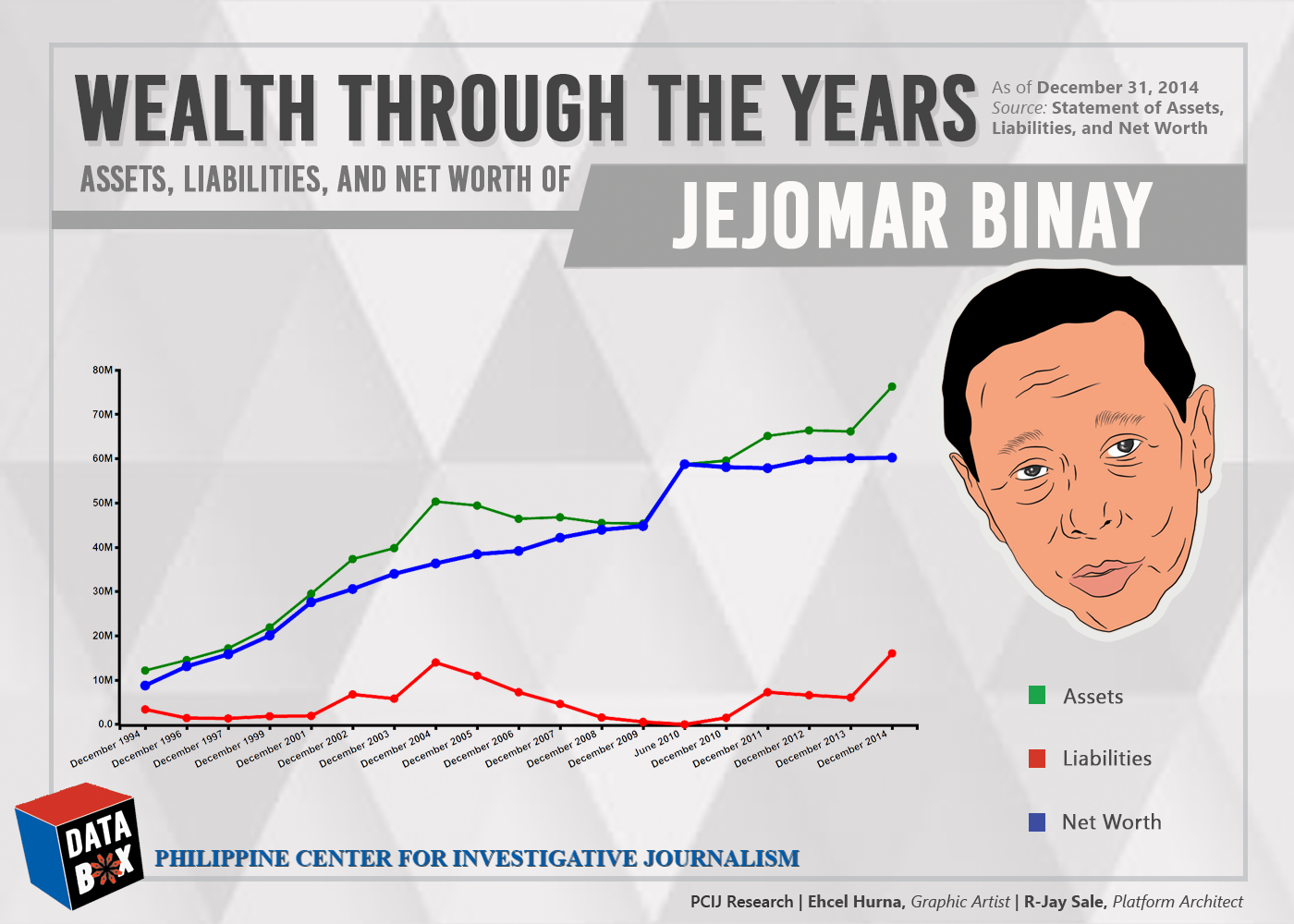 Twenty-five years hence in 2014, this grew to P60.2 million, but also a cumulative 20 times more from his first year in office. He has filed a total of 23 SALNs, copies of nearly all on file at the PCIJ.

His 2014 net worth consists of the following entries: real properties valued at P13.92 million, personal and other properties of P62.38 (total assets: P76.3 million), and liabilities of P16 million.

But in 1989, Binay started with just the following: P183,445 in real properties, P3.7 million in personal and other properties, and liabilities of P2.87 million.

The year he was elected vice president in 2010 was also the year that Binay marked the biggest leap in his net worth. From just P44.8 million in his 2009 SALN, he reported a net worth of P58.09 million, including real properties of P16.88 million, personal and other properties of P42.7 million, and liabilities of only P1.5 million.

For all the accusations of alleged plunder and unexplained wealth against Binay in months of public hearing by the Senate’s Blue Ribbon subcommittee, the Vice President did not declare owning any houses or apartments in his 2014 SALN. All that he listed as real properties were three pieces of residential and agricultural lots in Makati worth just slightly over P13 million.

But Binay seems to be rolling in dough. He declared having P38.8 million in cash on hand and in bank, apart from P4.2-million invested in growing flowers and pigs. His SALN for 2014 lists only one business entity: Blooms & Bouquet Flower Shop located at Unit 3, Southway Condominium, Mayapis Street, San Antonio Village, Makati City. It has a “nursery” in Batangas that Binay said he co-owns with his wife and former Makati Mayor Dr. Elenita Binay.

It was only in his SALN filing for the years 1999 to 2009 that Binay disclosed having interest in a second business second entity: JCB Farms, a piggery located in Maligaya, Rosario, Batangas. He acknowledged, though, that his “acquisition of/connection with” JCB Farms started years earlier in 1995.

In addition, the Vice President has a fleet of vehicles, including a Ford Club Wagon and Toyota Land Cruiser, altogether worth P11 million; P6.2 million in “furniture, antiques, clothing and other personal properties”; P1.1 million in jewelry; and P829,000 in “prepaid income tax/creditable withholding tax.”

Among the presidentiables, Binay and Duterte are the only ones whose immediate family members have held prominent political posts. Politics, in fact, has practically become a family business for both Binay and Duterte.

Jojo and Elenita Binay and son Jejomar Erwin Jr. or Junjun have taken turns serving as mayor of the financial district of Makati City since 1987 — an uninterrupted 29-year reign of the clan in Makati City.

In the three years that she served as Makati City mayor from 1997 to 2000, Elenita Binay filed four SALNs jointly with her husband, all marked with constantly rising values of their conjugal net worth.

Currently suspended Makati City Mayor Junjun Binay became a city councilor straight from college (where he majored in creative writing and public administration) and Abigail, from law school. Before plunging into national politics in 2010, Nancy, a tourism graduate, had her hands full as a wife and mother and as a partner in her husband’s family businesses.

A third Binay daughter, Anne, works as executive assistant at the Vice President’s office. Only the youngest child Joanna Marie is not in public service on either elective or appointive capacity. 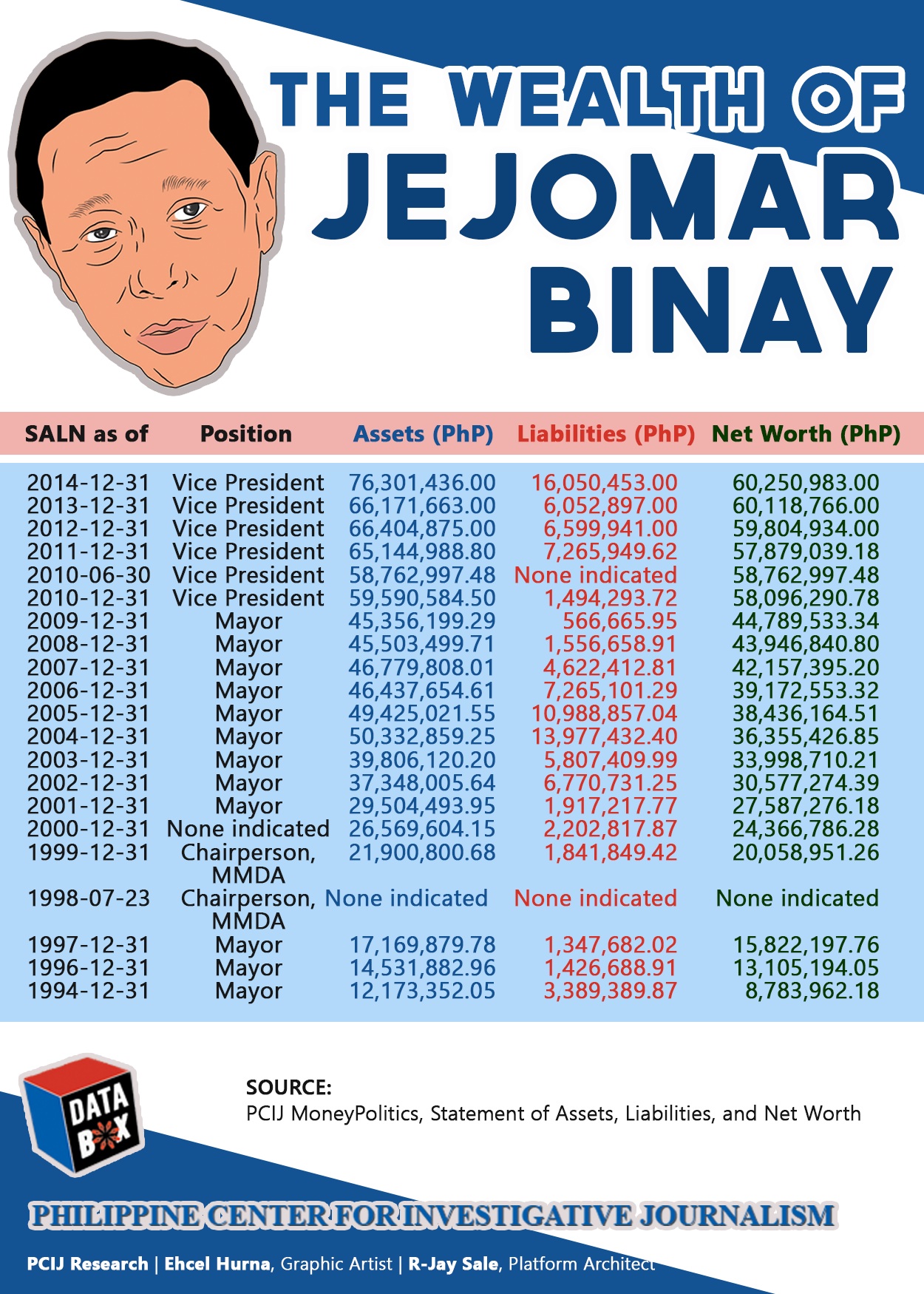 Individually, the three older Binay children in public office are more than affluent, even if they have not really had enough years or opportunity to grow their wealth by leaps and bounds outside of politics.

Now a widower raising three children, Junjun declared purchasing various real properties (residential, mix-use) from 1996 to 2005 in Tagaytay City in Cavite; and in Nasugbu and Loco in Batangas.

But his personal properties saw a tremendous surge in value beginning 2005 while he was still a councilor and on to becoming mayor in 2010.

In his SALN for 2014, Junjun Binay declared having P13.2 million cash on hand and in bank, P24.7 million in investments; P5.5 million in art, jewelry, and other personal properties; P3.3 million in vehicles; P3.72 million in furniture, antiques, and appliances; and P535,000 more in other unspecified personal assets.

From 1999 to 2014—the period during which he was working his way from councilor to vice mayor, to mayor of Makati — Junjun Binay said he was a shareholder or had acquired interests in a plethora of business entities, notably:

Makati City 2nd District Rep. Abigail Binay, meanwhile, has a net worth as of 2014 of P48.99 million — assets of P78.40 million minus liabilities of P29.4 million — according to an official report of the House of Representatives on the 2014 SALN of its members.

Among her real properties, Abigail listed the following, and their various modes of acquisition from 2000 to 2009, or before she joined Congress:

The last property, according to Abigail, had an acquisition cost of only P3.17 million, fair market value of P10.19 million, and acquisition-cost-plus-improvements value of P14 million flat.

In her SALN filings from 2010, Abigail listed the interests and financial connections that she said she acquired from 1992 to 2008, or before she was elected legislator:

Abigail also listed among her personal properties that were acquired from 1994 to 1997 stocks in Kuko-Phil. Petron valued at P25,201; paintings worth P471,500; life insurance cash option credits of P308,480; jewelry worth P1 million; vehicles worth P9.66 million; capital in business worth P10.77 million; and P10.32 million cash on hand and in bank.

In 1994, Abigail was just 19 years old. It was only in 1997 when she graduated from the University of the Philippines in Los Banos with a degree in B.S. Human Ecology. In 2001, she obtained her Juris Doctor degree from the Ateneo de Manila University.

In all her available SALN, however, Abigail has not disclosed her business or financial interests in JCB Farms.

Among her liabilities, she enrolled the following across her various SALN filings:

Nancy’s SALN filings for 2013 and 2014 show that she is the proprietor since 1999 of Jajan Marketing and a shareholder from 1994 to 2006, together with spouse, in the following business interests:

For her liabilities, Nancy listed the following in her latest SALN: