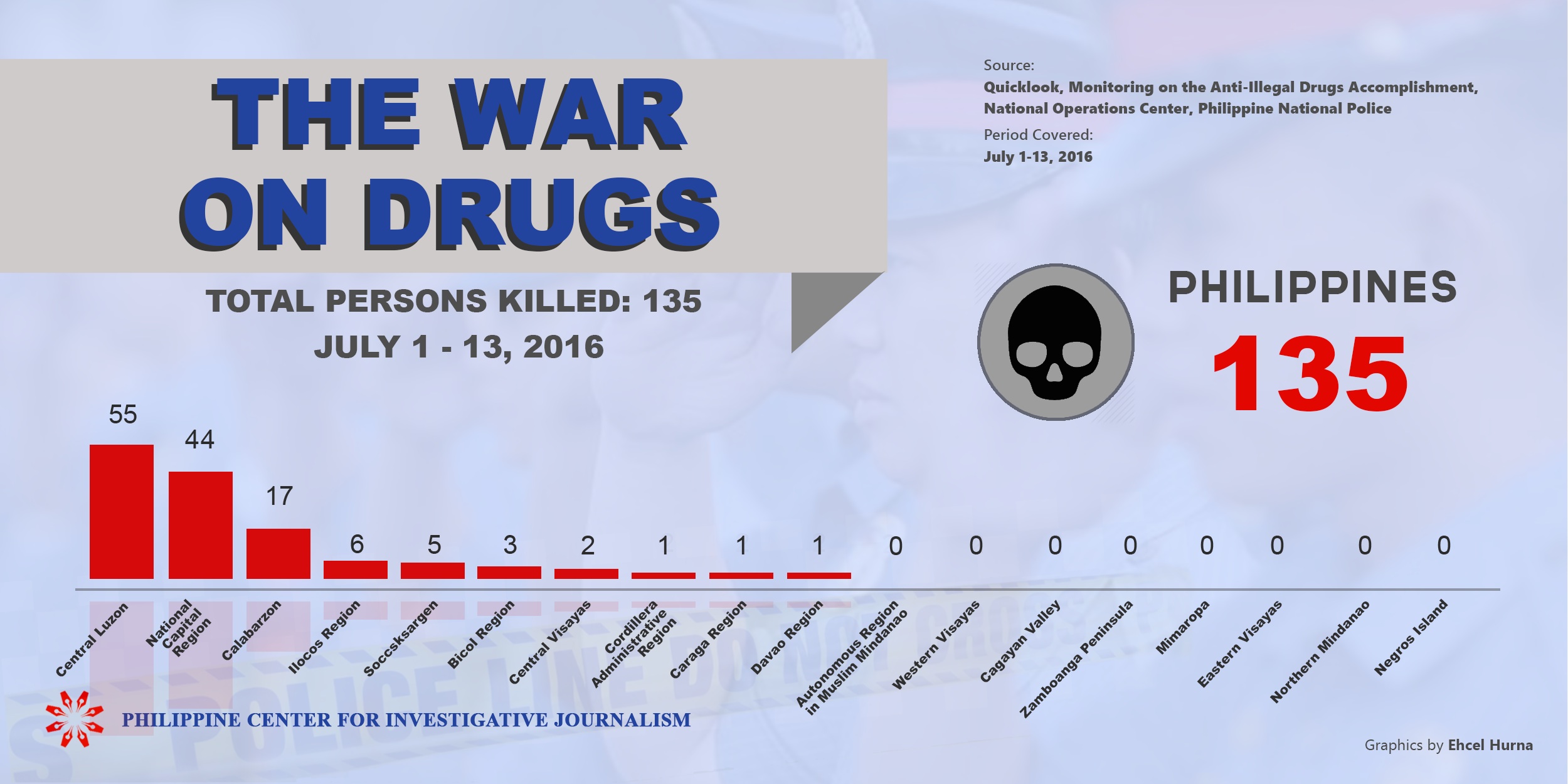 In two weeks’ time, the campaign has also nudged the “surrender” of 60,393 alleged drug users and 5,914 alleged drug pushers, apart from 43,026 houses “visited” by local and village officials to target and flush out suspects, according to official police reports obtained by the PCIJ.

But the PNP data show a curious ratio: Only one “drug pusher” for every 10 “drug users” have been located or compelled to surrender to the authorities in the last fortnight.

In contrast to the big numbers of those killed, arrested, or have “surrendered,” the police also reported only pithy volumes and values of illegal drugs seized in the operation — sachets and kilos of shabu, a sprinkling of marijuana, and just one tablet of the designer drug “Ecstasy.”

The total amount of the seizure is listed at “146,345 by estimated DDB value,” which presumably translates to P146.3 million. The PNP report, however, does not show a peso sign; neither does it state if the amount is in the thousands of pesos or some other currency.

PCIJ asked the PNP to clarify the matter but the officers contacted could not give any explanation as of posting time.

Shabu, by the latest published estimates of the DDB, could fetch at least a million pesos a kilo.

PCIJ asked for a copy of whatever PNP document has been issued clarifying the goals, scope, guidelines, and protocols for the implementation of the anti-drug war but did not get any from dela Rosa.

Instead, the PNP head said that President Rodrigo R. Duterte would issue shortly an executive order creating an inter-agency committee that will take charge of the police, legal, social, health, and other myriad aspects of the war on drugs.

Dela Rosa added that the PNP’s Internal Affairs Service has also started to investigate complaints of alleged abuses by the police and other officials in specific operations that had led to the death of some alleged drug users and pushers.

For now, dela Rosa said ‘Oplan Double Barrel’ is “the big picture” in the anti-drug war. It supposedly involves unleashing “the upper barrel” – ‘Oplan HVT’ — to snare “high-value” and supply-side targets; and “the lower barrel” or ‘Oplan Tokhang,’ to flush out “low-value” and demand-side targets.

‘Tokhang’ is a combination of Visayan words “toktok” or to knock, and “hangyo” or to plead or request. ‘Tokhang’ was first launched in Davao City in 2012 under then Mayor Rodrigo R. Duterte.

Local government units have adopted the campaign, but some have infused it with their own branding. The Quezon City government calls its campaign ‘Oplan Kapak,’ or short for “katok” and “pakiusap.” In Tanuan, Batangas, the mayor has required alleged drug users and pushers to take their “walk of shame” across the city, with posters declaring “Drug Addict Ako: Huwag Pamarisan (I am a Drug Addict. Don’t Follow my Example)” either hanging from their necks or taped to their clothes.

As of July 13, 2016, reports of the National Operations Center (NOC) of the Philippine National Police (PNP) showed these “accomplishments” of the new administration’s two-week-old war on drugs.

Of the country’s 18 regions, no killings have been reported as of July 13 in only seven regions: the Autonomous Region in Muslim Mindanao, Western Visayas, Cagayan Valley, Zamboanga Peninsula, Mimaropa, Eastern Visayas, Northern Mindanao, and Negros Island Region.

In the 11 other regions, however, the PNP reports showed that the bodies of alleged drug pushers have shown up in alarming numbers, notably: 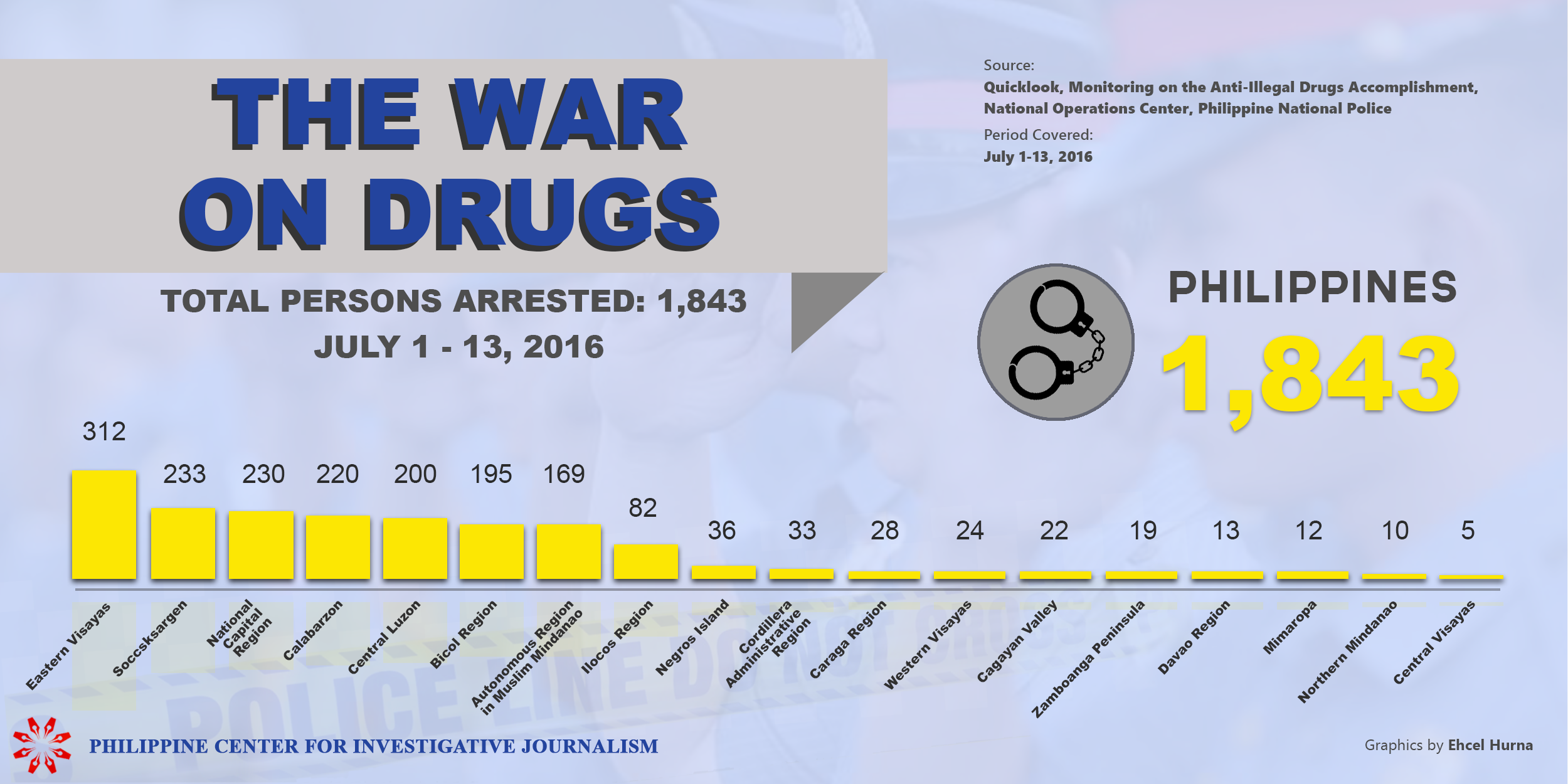 Media reports have quoted police authorities as saying that the drug suspects ended up dead because they resisted arrest or fought back – “nanlaban.” Two PNP reports on Oplan Tokhang in fact show a match between the figure of those killed and that of drug pushers who were “hostile” or had denied they were involved in the illegal trade.

But according to another NOC report, “Monitoring on the Anti-Illegal Drugs Accomplishment,” which covers Oplan Tokhang during the same period, the fatalities are spread across 10 areas – which even excludes Mimaropa, which had the highest number of “hostile” drug suspects (124).

Metro Manila, which had only seven drug suspects listed as “hostile” in one report ended up with 44 fatalities under Oplan Tokhang in the other document. Central Luzon and Calabarzon also had no “hostile” drug suspects listed in the “Monitoring on Project Tokhang” report, yet according to the other NOC tally, they had the second and third highest number of dead respectively under the same police operation.

In any case, the PNP says that Project Tokhang has snared 5,914 “drug pushers” from July 1 to 13, including:

In the meantime, a “surrenderees” tally of 4,016 is enrolled in “Monitoring on the Anti-Illegal Drugs Accomplishment.”

But the supplementary “Monitoring on Project Tokhang,” which draws the participation of local government units and barangay councils, showed much bigger numbers of “surrenderees.”

The numbers indicate that only one “drug pusher” for every 10 “drug users” have been covered by Project Tokhang in the first two weeks of the government’s war on drugs.

In addition, the report said that as of last July 13, a total of 43,026 houses have been “visited” as part of Project Tokhang. 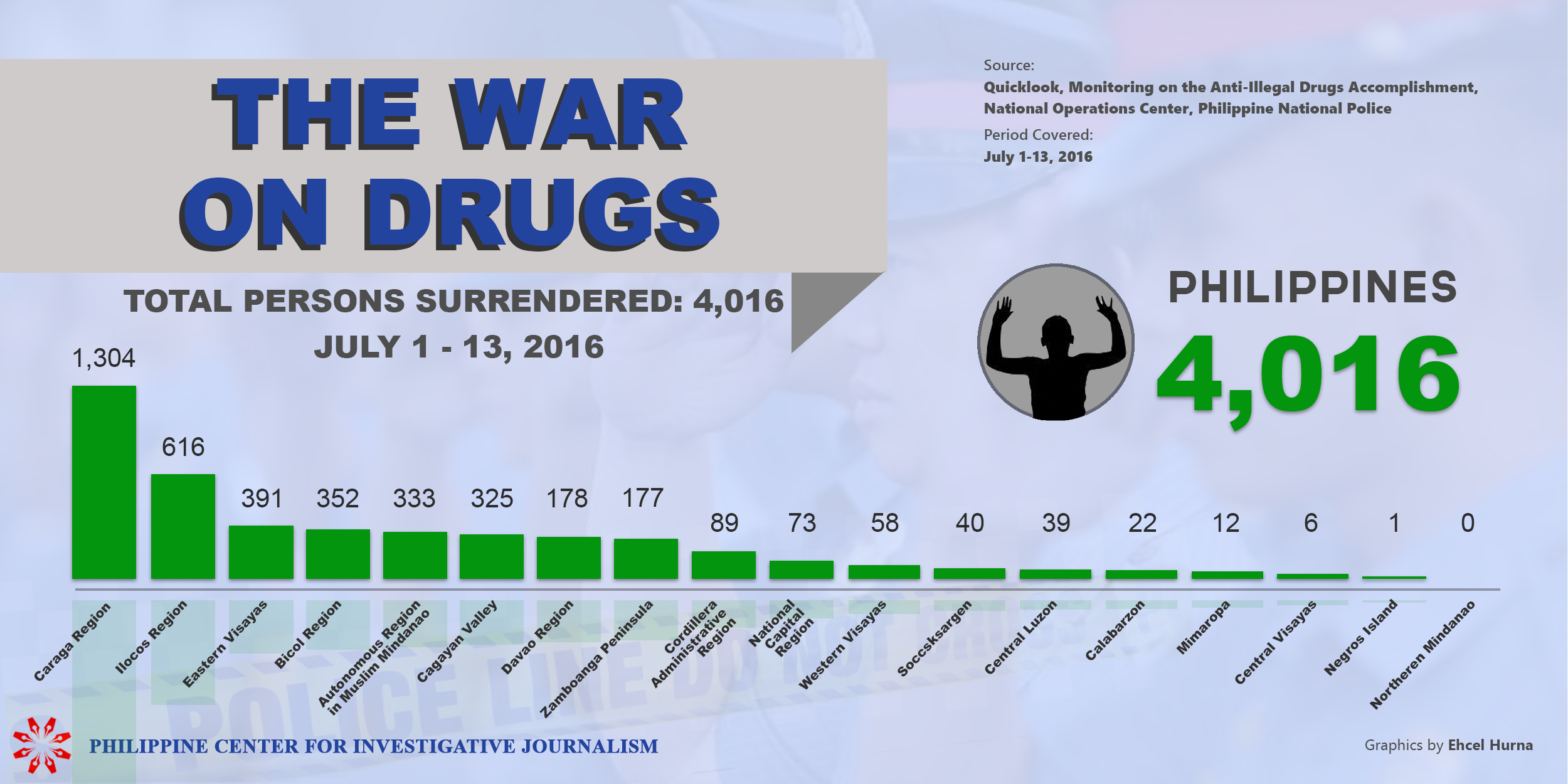 The 60,393 “drug users” who have been located or identified across the country in the last two weeks, included:

The 43,026 “houses visited” under Project Tokhang consisted of big numbers for certain areas:

Finally, as part of the “results of operation” of its war on drugs, the various PNP regional offices reported the seizure or surrender of relatively small volumes of illegal drugs during the same period. These included:

The PNP report put the “estimated DDB value” of this cache of seized illegal drugs at only “146.345.

All the PNP regional offices reported that they had seized sachets of shabu, which is also known as the accessible drug of choice of the less affluent.

Yet the 230 kilos of shabu listed in the report were apparently confiscated from only two operations conducted in Metro Manila (50 kilos) and in Cagayan Valley (180 kilos).

The seizure of the single tablet of Ecstasy — “the drug of choice of the rich” — was credited to the PNP regional office in Calabarzon.