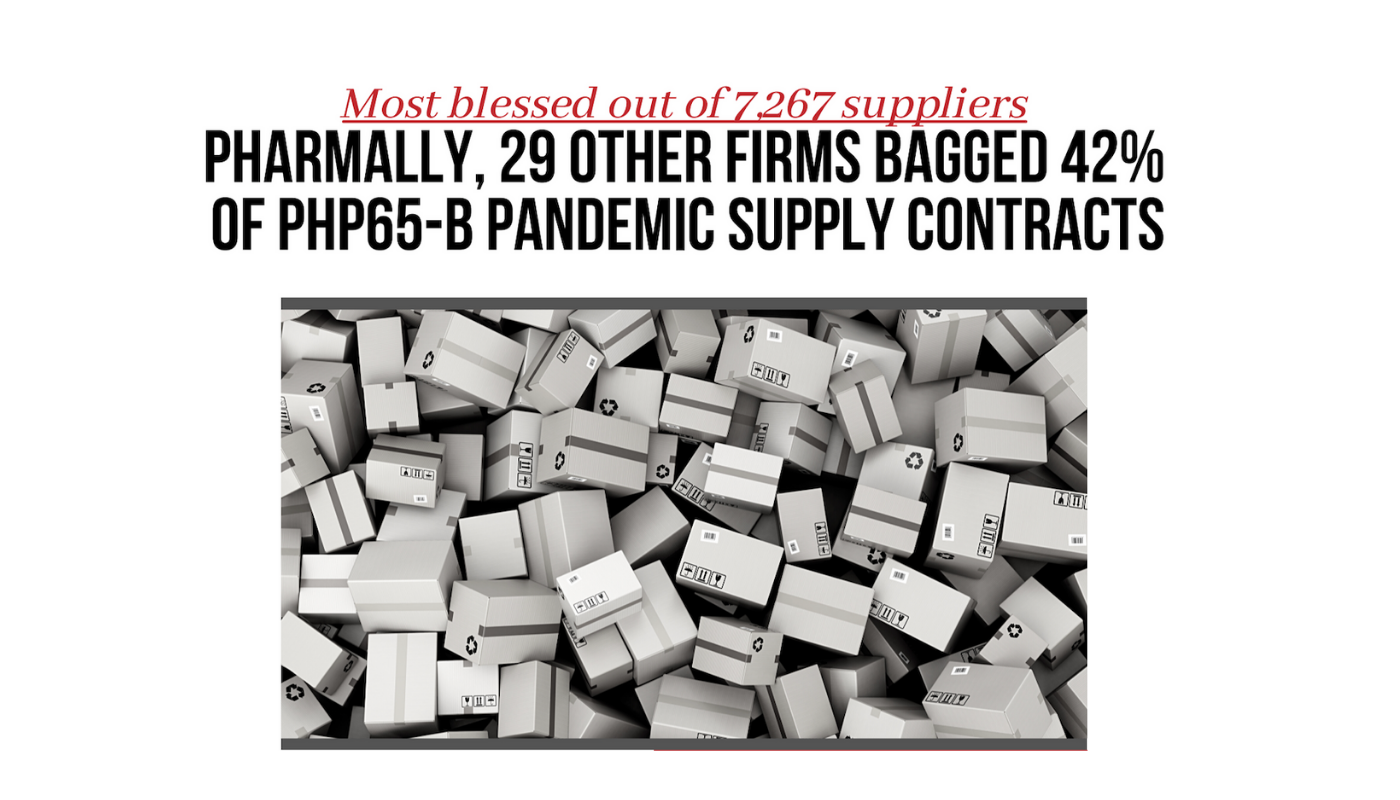 GPPB data showed that a total of 7,267 suppliers applied to get contracts under Bayanihan 1 and 2. But most of them lost out to the top 30 suppliers that snared most of the contracts yet represent just 0.4 percent of the total suppliers’ pool.

From March 2020 to September 2021, national and local government agencies awarded PhP65.19 billion worth of supply contracts from the Bayanihan 1 and 2 pandemic-response funds.

This total spend implies that on average, government agencies were disbursing about PhP4.07 billion in supply contracts per month, or PhP135.6 million per day, during the 16-month period.

By all indications, though, the contracts were awarded in a rushed, erratic, and in many instances irregular, manner to only a few suppliers evidently favored by some procuring agencies. Curiously, too, a significant number of the contracts covered goods and equipment that could not pass as pandemic-response items at all.

In all, of the 22,000 awarded supply contracts enrolled in the Government Procurement Policy Board (GPPB) database as of Sept. 8, 2021, at least PhP27.4 billion or 42 percent went to the top 30 suppliers.

GPPB data showed that a total of 7,267 suppliers applied to get contracts under Bayanihan 1 and 2. But most of them lost out to the top 30 suppliers that snared most of the contracts yet represent just 0.4 percent of the total suppliers’ pool.

The topnotchers’ luck did not end there.  The Philippine Government Electronic Procurement System (PhilGEPS) database yielded a few more million-peso contracts for supposedly pandemic-response projects that some of the same top suppliers in the GPPB database had also won.

The luckiest of the lot were the top 10 suppliers led by Pharmally Pharmaceutical Corp. This group bagged PhP18.8 billion or nearly a third — 29 percent — of the total supply contracts awarded.

The suppliers ranked Nos. 6 to 10 secured contracts over half a billion pesos each, namely:

Founded in 1943 “as an arsenal workshop during the War Against Japanese Aggression, XCMG was incorporated in 1989 as a state-owned international company. Its official website says that XCMG has ranked No. 8 in the world construction machinery industry since 2014, and remains No. 5 in the Top 50 Summit of World Construction Machinery Industry. It claims to have 30, 000 employees operating in China, the United States, Germany, the Netherlands, Poland, India, Brazil, and Uzbekistan. Its main factory is located Xuzhou City, Jiangsu Province, China. Its product lines of heavy machinery include those used for or earth-moving, concrete, road work, hoisting, mining, hydraulics, well as fire trucks and generators.

XCMG says that it also sells these medical supplies; “Professional PPE medical suit protection isolator cloth disposable isolation” gown, at US$200 – 500 per box; and “Lanswe Disposable Protective Mask, blue, superline fiber,” for minimum order of 1,000 piece per box. No amount was quoted for the masks that is described to be “safe-type, non-woven fabric, three-layer protection.”

Sunwest Development and Construction, is owned by the family of Ako Bicol Party-List Representative Elizaldy S. Co, who is also listed as the founder of the Sunwest Group Holding Co. Inc.

A Triple A construction company, Sunwest Construction secured from the Duterte administration the PhP708-million contract to build landslide facilities for the Bicol International Airport in Daraga, Albay, in December 2016.

Earlier, in July 2016, the Department of Public Works and Highways had also awarded Sunwest Construction other contracts, including the PhP91.6 million for the construction of the Mayon Eco-Park Road in Sto. Domingo, Albay.

In February 2021, the Land Transportation Office awarded the joint venture of LDLA Marketing and Trading, Inc. & Sunwest Construction and Development Corp. a contract for the “Procurement of Road Safety Interactive Center.” The joint venture submitted a bid for PhP499,946,463 for the project -- just PhP53,537 less than the authorized budget for contract of PhP500 million – and was declared as “the single calculated and responsive bid.”

Founded in 1992 in Legazpi City, Sunwest was the No. 8 contractor under the administration of President Gloria Macapagal Arroyo; it secured civil works projects worth PhP2.73 billion from July 2001 to June 2010.

The third 10 suppliers ranked Nos. 21 to 30 won a combined total contract value of PhP3.41 billion, or 5.2 percent of the total contracts awarded. They are:

Pharmally’s story – a poorly capitalized, newly registered company with dubious financial, technical, and legal capability to deliver on multi-million contracts – is a narrative that seems to repeat for a number of the other top-ranked suppliers.

For one, of the top 20 suppliers, only three others had registration documents available from the Securities and Exchange Commission (SEC).

These are Biosite Medical Instruments, No. 6, NIKKA TRADING, No. 13, and Philippine Blue Cross Biotech Corporation, No. 19. (See sidebar, Financial Analysis of 2019 Financial Statements of Biosite and Nikka.)

Another supplier, DKAR Trading, which had a joint-venture contract with Sunwest Construction, registered with the SEC only in 2020 as a single-person entity.

For another, supplier No.12, BV Three Two Four Printing and Trading, secured contracts for services apparently unrelated to its core business -- catering and provision of relief goods. Its total contracts haul: PhP628 million, all of it from just one procuring entity, the local government of Taguig City in Metro Manila. BV Three Two Four had won contracts from the Taguig LGU, even prior to the pandemic.

A secret to how and why these top suppliers managed to romp away with millions to billions of contracts lies in the simple things: a comma, a period, a word in singular or plural form, a word abbreviated or spelled out, or a name set in all caps or in caps-and-lower case.

It is a secret that reveals, too, the multiple errors and major questions that could be raised about the integrity and quality of the information lodged in the GPPB database.

The Right to Know, Right Now! Coalition had sent request letters to the GBBP, the acting secretary of the Department of Budget and Management (DBM), and the Procurement Service-DBM for comment on the errors. The first letters were mailed on Sept. 5 and Sept. 6,  2021, and follow-up letters, on Sept. 16, 2021.

The Coalition had even asked the Freedom of Information-Project Management Office to assist in getting replies to the letters. A full month had passed but no reply or comment has come from the GPPB, PS-DBM, and the DBM acting secretary.

The case of many of the top suppliers with names variably listed with the most minute differences repeats also for 260 other smaller suppliers in the GPPB list. – Right to Know, Right Now! Coalition, 14 October 2021

Here are the many name variants that appear for some of the same top suppliers, as listed in the GPPB database: 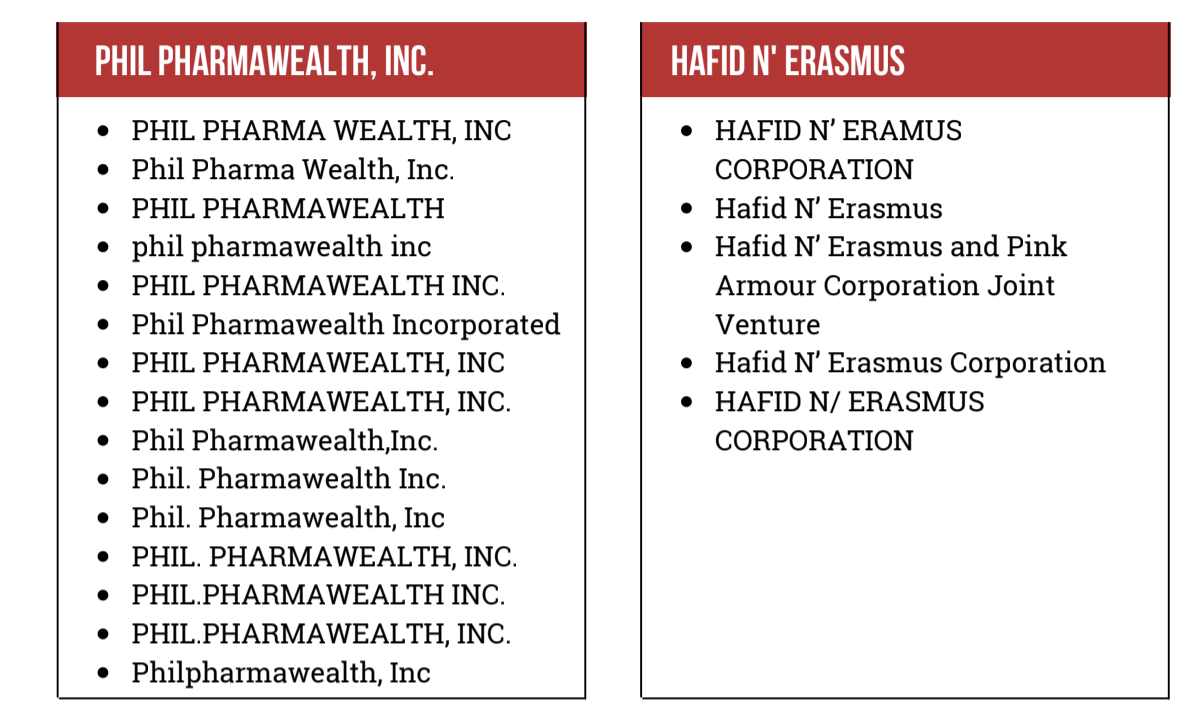 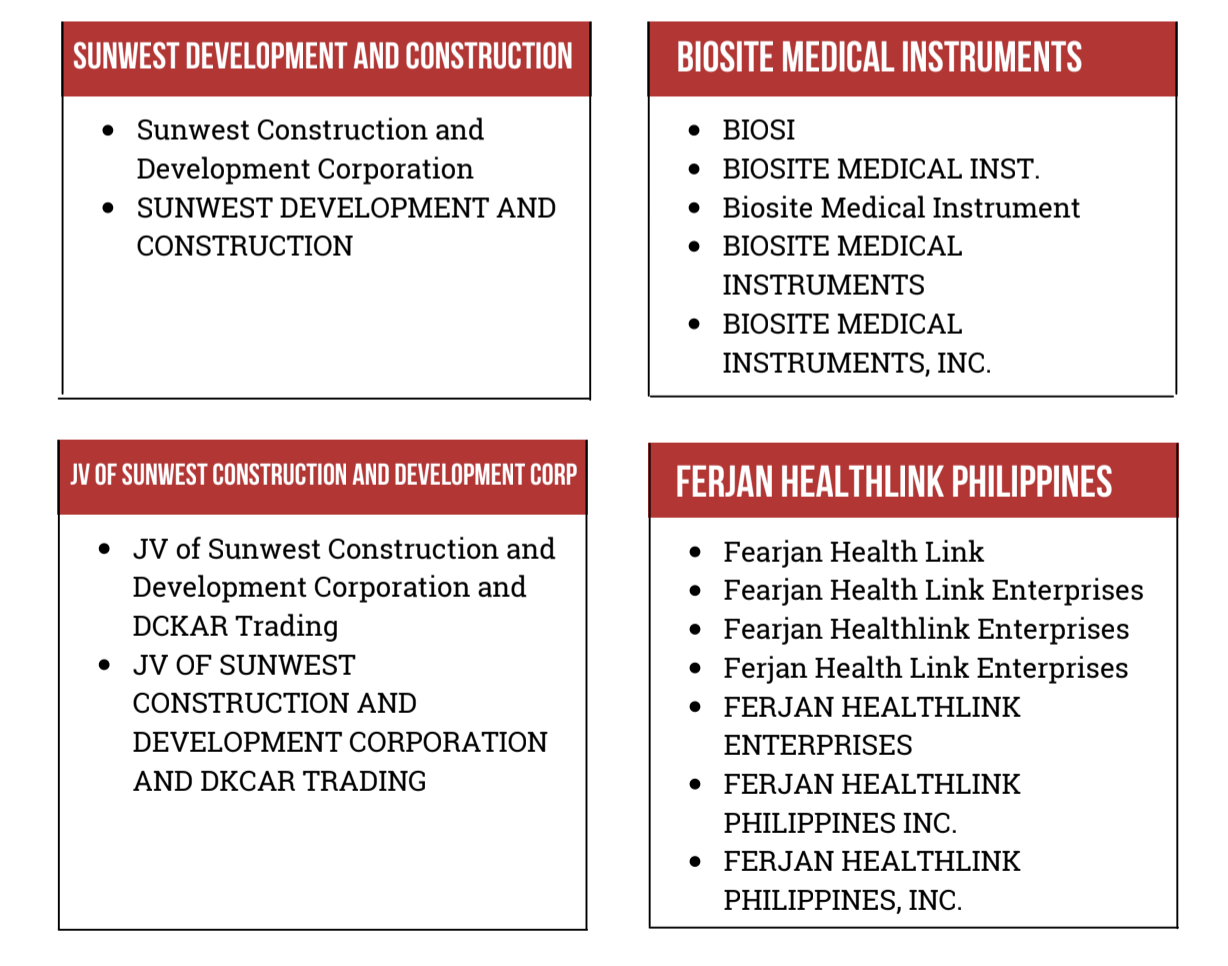 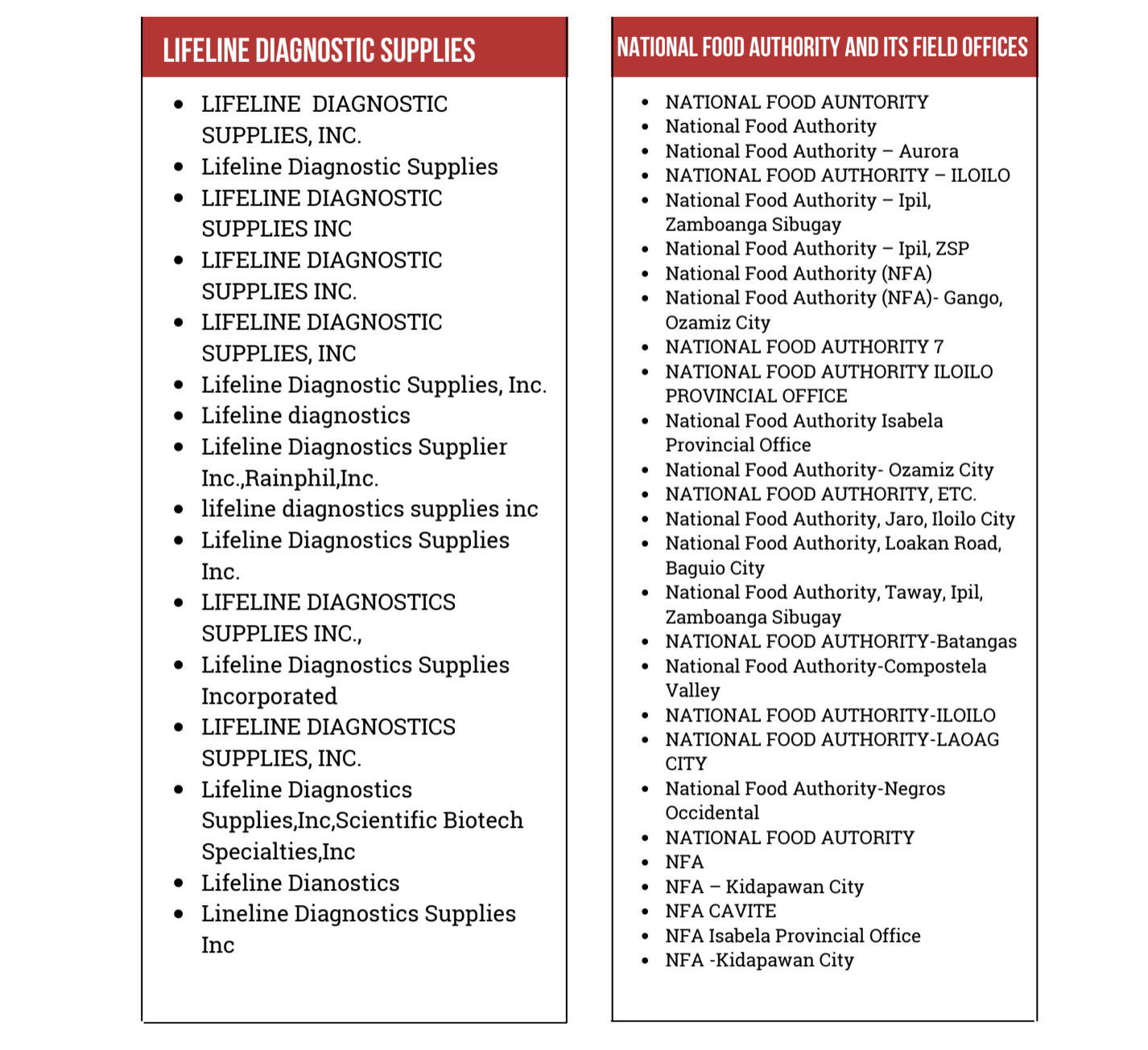 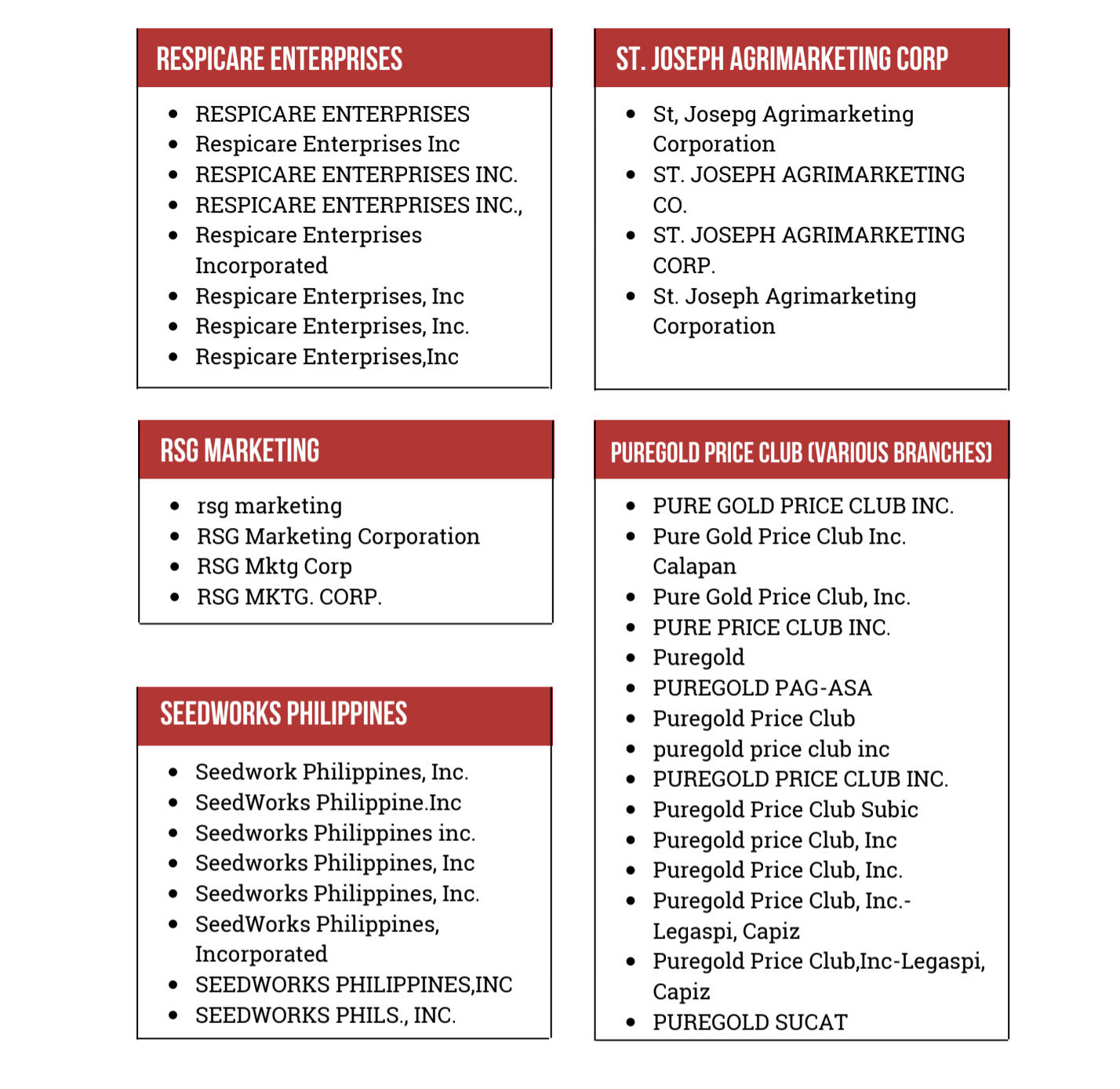 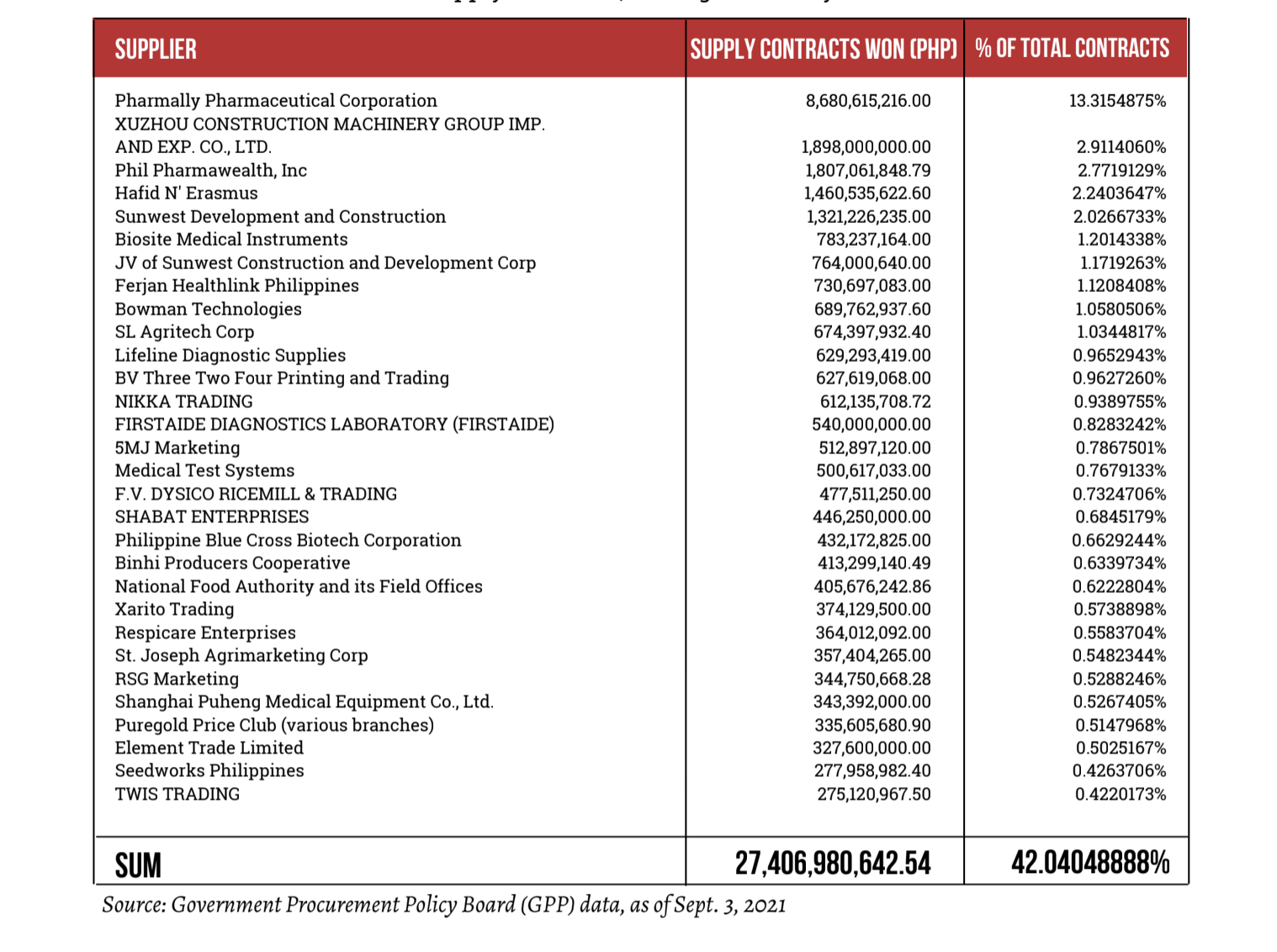