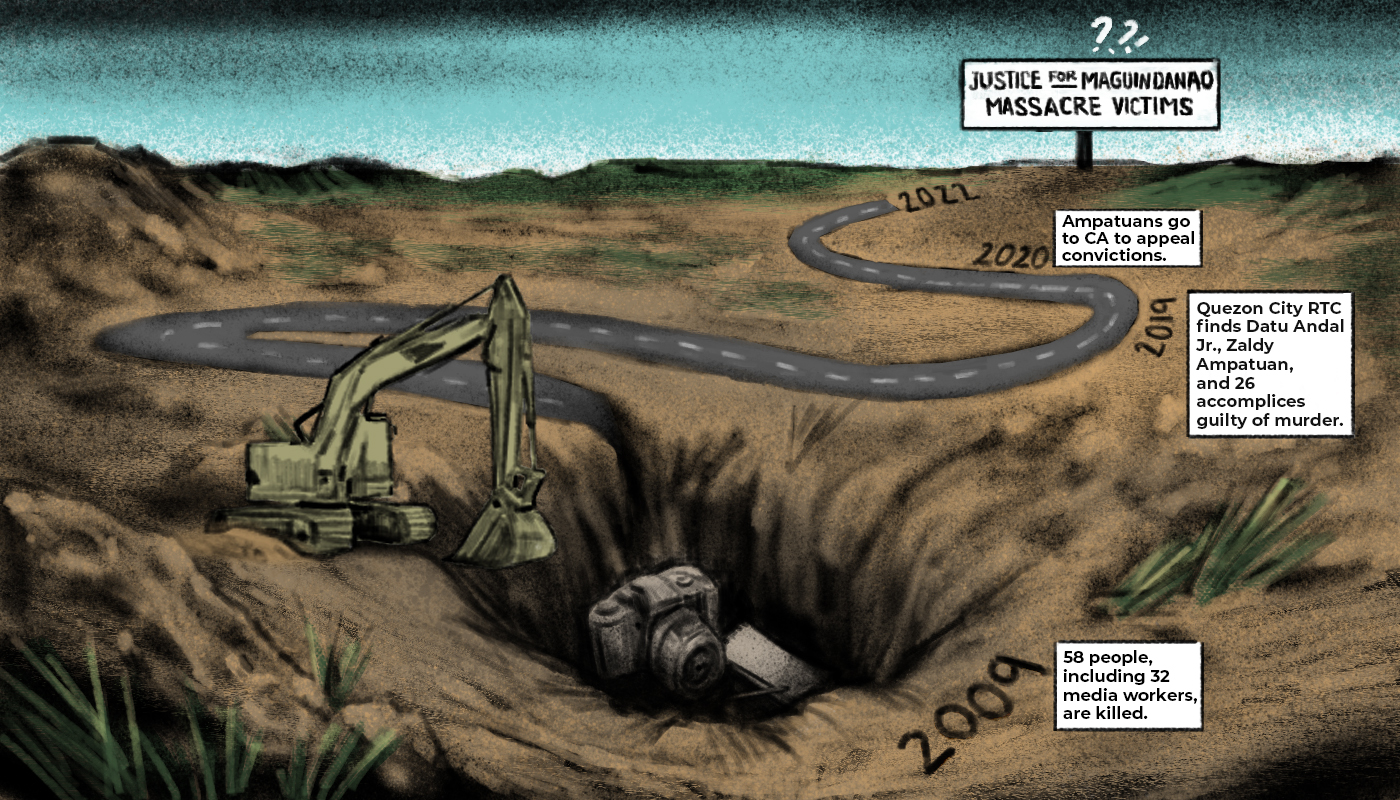 Radio broadcaster Percival Mabasa, known to his listeners as Percy Lapid, held nothing back from his listeners. He was searing. He was combative. He was relentless.

The broadcaster was reading messages from Bucor employees complaining about power outages and water shortages in certain offices inside the agency compound, supposedly as punishment from Bantag. Mabasa said he could not name the employees because they feared that speaking out against Bantag would put them in danger.

A month later, on Oct. 3, 2022, Mabasa was gunned down by motorcycle-riding assailants near his residence in Las Piñas, in the country’s capital region.

Mabasa was the second media personality killed under the new administration of President Ferdinand Marcos Jr., laying bare how dangerous the Philippines has become for media workers, particularly for hard-hitting radio commentators. It’s the seventh worst country in the world in terms of the murder of media workers, according to the New York-based Committee to Protect Journalists. The Philippines has been in CPJ’s impunity index for the past 15 years, indicating continued failure to address impunity.

That Mabasa operated from the capital region of Metro Manila, where media groups are generally more organized in their efforts to protect each other and to respond to threats, underscored the brazenness of the attack.

The high-profile investigation that followed also revealed the sordid underbelly of the Philippine correctional system. Bucor inmates facilitated Mabasa’s death, bringing to life “OTJ” (On the Job), a very disturbing but fictional movie about criminal operations in the country’s prisons.

The Department of Justice (DOJ), citing “totality of evidence,” believes Bantag masterminded Mabasa’s killing — out of 160 subjects of Mabasa’s tirades in his radio program since 2021, based on the agency’s own count. Bantag allegedly ordered inmates under his supervision to gag the broadcaster for good.

The DOJ suspended Bantag after one of the inmates allegedly involved in Mabasa’s killing died in the facility. On Nov. 15, the DOJ served a subpoena for Bantag to attend formal investigation hearings on the murder. If Remulla is proven correct, Bantag “will probably be the highest official of this land ever charged with a case of this gravity.”

But the 2009 Maguindanao massacre – where 58 Filipinos were killed, among them 32 media workers – and the long and drawn-out quest for justice for the victims of the world’s worst election-related violence – offers a sobering reminder of the challenges confronting efforts  to bring Mabasa’s killers to justice.

The 13th anniversary of the Maguindanao massacre is remembered this month, on November 23, amid continuing calls for justice.

The trial at the Quezon City Regional Trial Court (RTC) took a full decade before rulings were issued, due to the large number of people charged with multiple murder.

In separate decisions in 2019, the RTC found masterminds from the Ampatuan political family — Andal Jr. and brother Zaldy — guilty of murder. Along with 26 accomplices, they planned and executed the attack on a convoy on its way to file an opposition figure’s candidacy against their father, Andal Sr. They buried the bodies and the vehicles in Ampatuan town, the site of the massacre named after the ruling dynasty.

The families of the victims of the Maguindanao massacre are still waiting for a final ruling, however. After the 2009 ruling, the RTC decisions were elevated to the Court of Appeals (CA) and remain pending, prompting fears of court reversals.

Who is leading the investigation?

Nena Santos, who was among the lawyers who prosecuted the Ampatuans and their accomplices, was concerned that the investigation into Mabasa’s killing had taken “so many side steps.”

Bantag denied killing Mabasa. He has since made disturbing but unfounded claims, turning the tables on his accusers but keeping Mabasa’s killing in the headlines.

Santos expressed concern that some of Bantag’s revelations could sideline efforts to file cases against Mabasa’s killers.

Bantag claimed that Bucor inmates killed Mabasa upon the orders of a fellow inmate who was supposedly a drug lord. He said Remulla wanted him out to wrest control of the drug lords in Bucor.

In a strange development, Bantag was also revealed to have dug a deep hole inside the Bucor compound. Bantag said it was supposedly for the construction of the deepest swimming pool in the metro, but Remulla said Bantag himself earlier told him that he was looking for Yamashita treasure.

A “straightforward” case, backed by well-preserved evidence and reliable witnesses, is needed for the speedy trial of the killers, said Santos.

To do this, Mabasa’s killing should be treated as a “special case,” similar to the setup after the Maguindanao massacre where government agencies focused on building the cases, she said.

Fears of a coverup attempt arose when one of the inmates who allegedly played middle man in Mabasa’s killing — Jun Villamor — died in the correctional facility after he was named in the DOJ investigation. The police initially said he died in his sleep, a lie that was exposed only after the DOJ allowed a second autopsy that revealed he was suffocated with a plastic bag.

"It looks patently apparent and obvious that [the] death [of the middleman] was part of an attempt to cover up the crime," said Carlos Conde, head researcher of Human Rights Watch, the New York-based nongovernment organization. "The question, though, is if the authorities have credible evidence to pin all this on a suspect like Bantag," he said.

What’s clear, Conde said, was that those behind the killing of Lapid and the middleman were well-connected. "They've gone to great lengths trying to cover up the original crime. I think it's safe to assume that they will do what it takes to prevent the case from moving forward."

The Maguindanao massacre also underscored the necessity of private efforts in building cases against the suspects. Santos and other private lawyers helped in the legwork to secure and preserve evidence, and talk to and protect the witnesses.

The private lawyers immediately requested, for example, for the autopsy of the bodies to be done in nearby South Cotabato and not in the Autonomous Region in Muslim Mindanao, where the Ampatuan family held power. They had to talk to the datu or leaders of villages, mayors, and governors to reach witnesses and secure testimonies, sometimes helping to write the police affidavits themselves. They also requested the Supreme Court to change the venue of the trial to Quezon City in the country’s capital region.

This level of cooperation and support is not yet apparent between the DOJ and the Mabasa’s family’s lawyer.

Veteran journalist Roy Mabasa, brother of the slain broadcaster, said the family was given “partial development status of the investigation” but was “not fully satisfied,” he told PCIJ.

“Personally, I want regular case conferences. I would [want to] know kung saan papunta (where the case is going). [There are] many other questions related to other persons of interest.”

The private lawyer, Dante Pellagio, was concerned the investigation seemed “to have stopped already after getting custody or identifying some suspects.”

“We could sense their full commitment [to the investigation] but we also noted there were a few lapses and a few things lacking in their efforts. We are even trying to help also by [making requests] but apparently our requests have not yet been acted upon,” he said.

Pellagio said a few more leads should be followed up. “We believe there are still others who could shed light or who could be investigated [for possible involvement in the killing.”

He was particularly interested in getting the testimony of  former Bucor legal chief Roy Lawagan. According to witnesses, Lawagan regularly visited the Bilibid compound about the time Mabasa’s killing was planned. He also wanted the driver of the getaway motorcycle – identified as “Orly” by one of the witnesses – to be tracked down.

“These investigating agencies could at least come up with [an artist’s sketch] of that Orly so if he surrenders or is captured, then he will shed a very, very important light on this investigation,” he said.

• file applications for the perpetuation of testimonies of witnesses obtained by the NBI, to preserve them in case something happens to the witnesses;

• file supplemental or additional judicial affidavits to set the record straight on inconsistencies in testimonies of those who have already made extrajudicial statements; and

Conde was also concerned that there were still "a lot of unknowns" in the investigation.

“That is why the onus really now is on the Marcos administration and specifically the DOJ to make the cases stand,” he said.

As Mabasa’s family struggled to secure evidence and testimonies that will help prosecute his killers, Santos hoped that the DOJ, as alter ego of the president, would sound off the Supreme Court about ordering the CA to fast-track its decisison on the Maguindanao massacre cases.

On Nov. 20, 2022, the families of the victims of the massacre returned to the site of the killings for the first time since the court ruling. Grasses have grown at the memorial markers, showing neglect during the pandemic, but the families’ resolve to find justice has grown only stronger through the years.

“We have been seeking justice for 13 years….,” said Grace Morales, speaking in Filipino. Grace is the wife of Rosell Morales and sister of Marites Cablitas, two media workers killed in the massacre.

“We only want to be assured that the cases are moving forward, the suspects at large will be arrested, and the cases appealing the [RTC ruling] will be decided with finality).” END