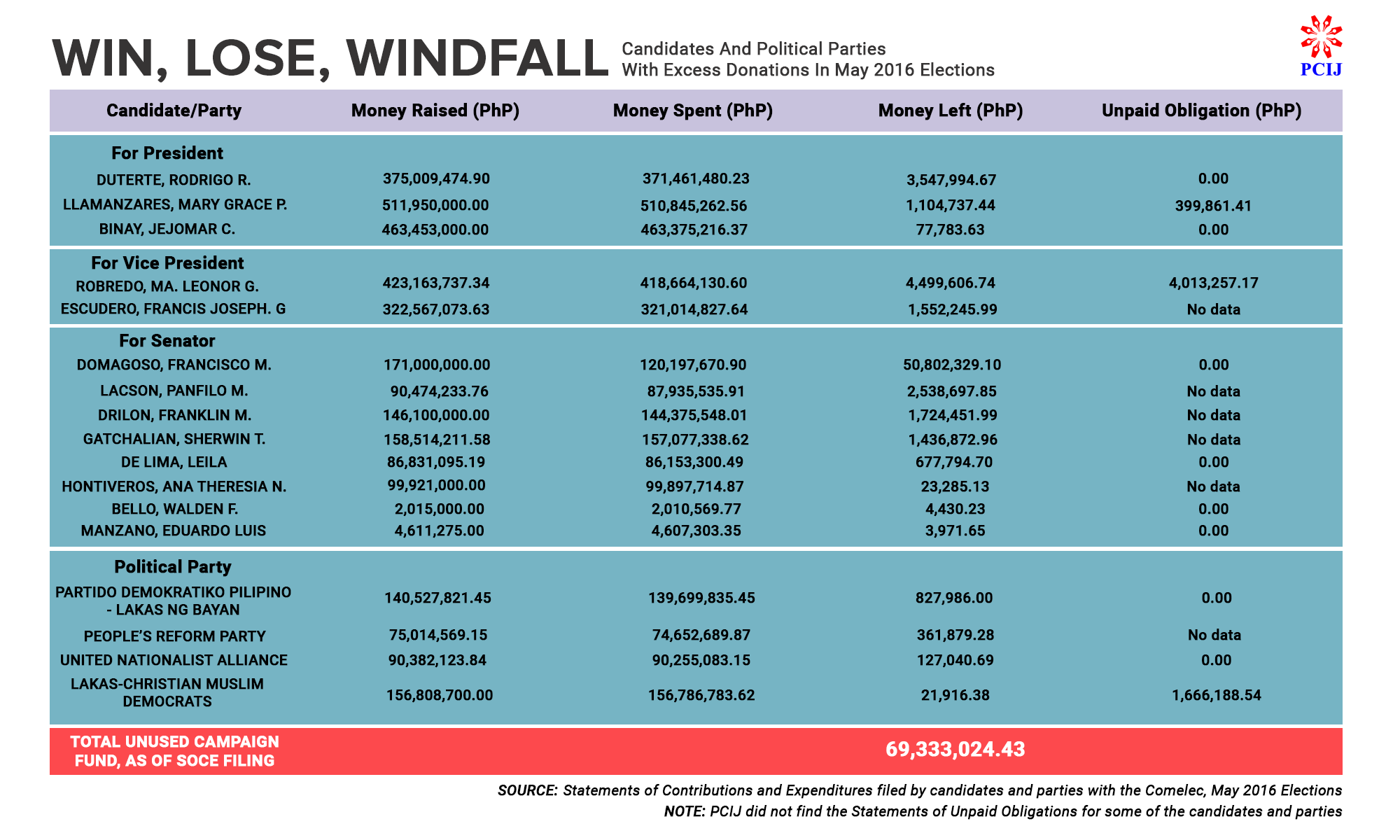 THE WINDFALL OF ELECTIONS

FRANCISCO ‘Isko Moreno’ M. Domagoso may have been unsuccessful in his quest to have a Senate seat in last May’s elections, but Christmas still came quite early for the former Manila vice mayor.

FRANCISCO ‘Isko Moreno’ M. Domagoso may have been unsuccessful in his quest to have a Senate seat in last May’s elections, but Christmas still came quite early for the former Manila vice mayor.

Once the dust had settled following the polls, Domagoso found himself with millions of pesos in excess campaign funds. To be exact, there was some P50.8 million left in his campaign chest, according to the campaign-finance report he submitted to the Commission on Elections (Comelec).

When PCIJ queried him later about the amount, he replied in part by sending copies of his quarterly income-tax return and a manager’s check, which showed he had paid P9.7 million in taxes for an income worth P50.55 million.

In other words, thanks to his campaign’s multimillion-peso leftover, Domagoso profited from his participation in the polls by as much as P40.9 million, net of tax. This is three times more the net worth he declared of having in 2014, which was 12.9 million.

But the 42-year-old former actor is not the only candidate who ended up with loads of leftover money after the May 2016 elections.

A PCIJ review of the Statement of Contributions and Expenditures (SOCE) filed by national candidates and major political parties shows a total of P69.33 million unused campaign funds from 13 candidates and four parties. The extra money ranges from a few thousand pesos to many millions.

In the United States, it is illegal for a candidate to pocket leftover campaign funds. But it is different in this country, where election laws and jurisprudence are silent on what should be done with such money – making it possible for candidates to keep excess donations for their own use. The only requirement is for them to pay taxes because the money they keep is considered income.

One election lawyer says that so long as the candidate pays the right amount of taxes, he or she violates no law in deciding to keep excess campaign funds. The lawyer is actually rather pleased that candidates are stepping up and reporting excess money from their campaigns. After all, he says, candidates could just shut up or make up something to avoid reporting the surplus.

Still, the lawyer says that he would rather have campaign funds to be considered “quasi public,” which would then prevent candidates from pocketing any leftovers for their personal use.

Indeed, lawyer Rona Ann V. Caritos, executive director of the Legal Network for Truthful Elections (LENTE) even suspects that some candidates run for office for reasons other than having a chance at being a public servant. “It’s a reality,” she says. “Some people run to earn money — to gain something from the campaign donation.”

Caritos says that it would be better if candidates planned their campaign more effectively. “If you did not spend all of the donations,” she says, “there could have been a flaw in the campaign plan somehow.”

For Damaso Magbual, national council member of election watchdog National Citizens’ Movement for Free Elections (NAMFREL), the use of excess campaign funds must be defined in law. “If there is a law, they could even say that that should go to the national government,” he says.

In any event, Caritos says that if there are excess funds, candidates could perhaps inform their donors about it and give them the option on what to do with the money. But she also admits that going this route isn’t that simple. In Filipino culture, Caritos says, it’s just not common for someone to take back what he or she already gave.

Eric Jude O. Alvia, NAMFREL’s secretary general, says the law may not be clear about surplus campaign funds but that does not mean that candidates should abuse the silence of the law. Similar to Caritos’s view, Alvia says a candidate should report back to his or her donors and ask what he or she should do with the unused money.

Another difficult scenario is when a candidate has already combined all the surplus contributions he has received, says Caritos, adding that the candidate would then have to decide which donors should get their money back and how much.

Alvia says one issue here is that candidates do not report periodically – they only submit reports 30 days after the elections. “If you report periodically, you have your cash flow – in and out – you know (whose money has not been used),” he says.

In this event, Alvia says, returning surplus political donations must be pro-rated or dstributed proportionately.

PCIJ tried to contact the candidates and parties who had reported unspent amounts to find out what they did with the money. Aside from Domagoso, only four – Vice President Robredo and Senators Grace Poe-Llamanzares, Sherwin ‘Win’ T. Gatchalian, and Panfilo ‘Ping’ M. Lacson — have responded as of this writing.

One of those who has yet to reply is President Duterte, who has a substantial amount to account for in the form of excess campaign funds.

President Duterte’s SOCE shows he received P375 million and spent P371.5 million during the campaign period. There is therefore a difference of P3.55 million, which he did not specifically report as additional income in his latest SALN.

The increase is reflected in his cash on hand and in bank growing by P465,524.11 and his liability decreasing by P100,000. On Oct. 22, 2016, PCIJ wrote to Duterte asking about the source of his additional income. His office has yet to respond as of this writing, although lawyer Ryan Acosta of the Office of the Executive Secretary said that PCIJ’s letter has been forwarded to the Office of the Special Assistant to the President.

Vice President Robredo also reported surplus campaign funds. She received P423.2 million and spent P418.7 million. Unpaid obligations worth P4.01 million were also reported in her SOCE. If the unpaid obligation has already been settled, there is a remaining fund of P486,349.57. Robredo did not indicate this specific amount in her SALN as of June 30, 2016.

PCIJ has received a letter dated Dec. 1, 2016 and signed by Robredo’s lawyer Reagan de Guzman, but this was silent on the status of Robredo’s unpaid obligation. De Guzman, however, wrote that “any excess is meant to be declared as income for 2016, for allocation for various expenses such as taxes and costs of canvassing and protest.”

In the meantime, the office of Senator Lacson said that he gave back his unused campaign money to donors. A letter sent by his media relations officer Joel Locsin said that “the excess amount (P2.54 million) was returned to the contributors who donated the same, and the corresponding acknowledgement receipts have been issued.” PCIJ, however, did not get a copy of acknowledgement receipts it requested from the senator.

In a letter to PCIJ, Poe’s Chief of Staff Nelson S. Victorino said that all unpaid obligations declared in the senator’s​ SOCE have been settled. This leaves Poe with P704,876.03 in excess donation. According to Victorino, the senator intends to use the amount for charitable purposes.

“Almost daily, people come to our office at the Senate seeking financial assistance,​” wrote Victorino. ​“Many of these requests are truly meritorious and Sen. Poe only wish (sic) that there are more funds available at her disposal so that she can help a greater number of people.”

Victorino said that any portion of the funds that will not be used t​his year will be reflected in the annual SALN ​Poe​ will​ file​ in April 2017. The senator, he said, will pay the income tax due on her excess campaign fund by yearend when she files her 2016 income tax return in April 2017.

As for Senator Gatchalian, lawyer Maria Bernadette V. Sardillo replied on his behalf, saying that the lawmaker’s excess donation worth P1.44 million was declared as part of his income. This, she said, is reflected in the SALN the senator filed upon assuming office in June 2016.

According to Sardillo, however, there is only a slight increase because Gatchalian had personal expenses and had been using the money, which was deposited in a bank, to cover them.

“So, from the time that he submitted his SALN in 2015, there have been transactions in his bank accounts such as withdrawals over time,” Sardillo explained. “It is for this reason that the increase in his SALN will not really be equivalent to P1.44M.”

Sardillo added that Gatchalian “intends to pay the necessary taxes for the declared income when it becomes due.”

On March 14, 2016, the Bureau of Internal Revenue (BIR) issued Revenue Memorandum Circular No. 30-2016 to remind candidates of their tax obligations.

Apart from registering with BIR, issuing official receipts, and withholding taxes, candidates were reminded that campaign donations are not taxable because these are given for the purpose of an electoral campaign – not for the personal enrichment of a candidate. To be considered exempt from income tax, these contributions must have been used to pay for a candidate’s expenses during his or her campaign.

In the event of unused or excess campaign funds, Revenue Regulations No. 07-2011 provides that these amounts are subject to income tax and must thus be included in a candidate’s taxable income in the income tax return he or she will file for the taxable year.

BIR Assistant Commissioner for Legal Service Marissa Cabreros says the fund should have been returned for it not to be subject to tax. But if candidates choose to keep it, it becomes income, she says. “So dapat i-declare nila iyan as windfall so subject saincome [tax] (So they should declare that as windfall so it is subject to income [tax]).”

For someone who is purely a compensation income earner, the taxable income must be declared for taxable year 2016 not later than April 15, 2017.

In the case of political parties and party-list groups, the taxable income shall be reported in the manner by which domestic corporations are required to file returns and pay taxes. The taxable income must be declared for the quarter ending June 30, 2016 not later than Aug. 29, 2016.

Compensation income earners like Gatchalian must thus declare his excess donation as part of his taxable income when he files his income tax return on or before April 15 next year.

The same applies to embattled Senator Leila de Lima who reported P677,794.70 in extra funds. The SALN she filed on June 30, 2016 shows an additional cash of the same exact amount. This is entered under her personal properties as “balance from election contributions received less election expenditures as reported.”