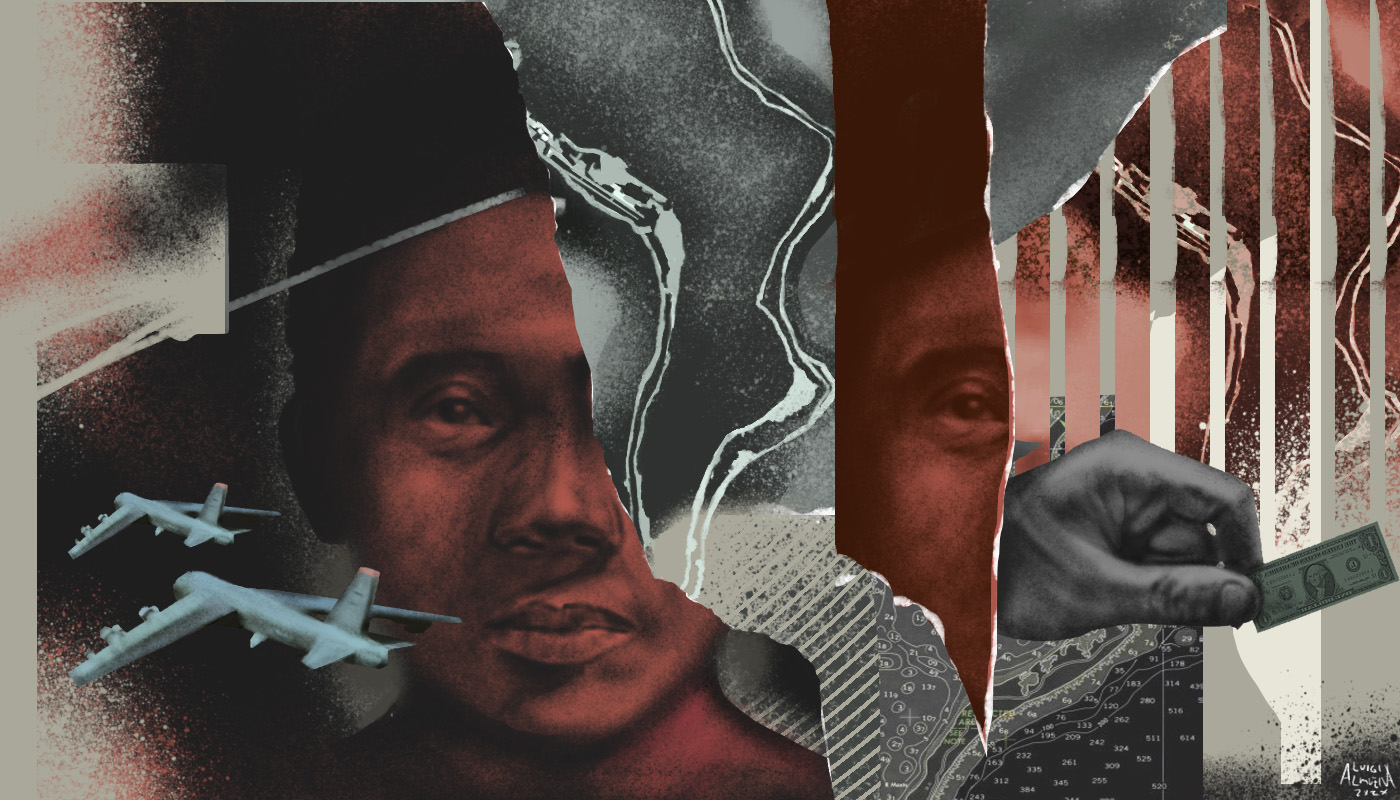 U.S. base in Diego Garcia is front line of battle for equal pay for Filipino workers overseas

'A defense contractor’s desire for profit should not be at odds with the basic labor rights and dignity of its foreign workers,” said Secretary Susan Ople of the Department of Migrant Workers.

Diego Garcia, a ring-shaped island south of the tourist haven Maldives in the Indian Ocean, is home to more than a thousand Filipinos working inside a U.S. naval base that serves as a launchpad for American military operations in the Middle East. The entire island is militarized but its clear waters, white sandy beaches, and tropical weather have made them feel like they were home.

Ramon* moved there in 2002 to work as an administrative staff for a monthly rate of $200, or P10,000 to P11,800 depending on the exchange rate, and in 2017 his pay increased under a new employer. He's earning more than his meager salary back in the Philippines where he used to work two jobs but still struggled to support his family. Working in Diego Garcia has allowed him to make their lives comfortable. Before the coronavirus pandemic, there were chartered flights when he wanted to go home, which he could afford to do once a year.

The idyllic life he wanted to go back to after the pandemic lockdowns was disrupted, however, when the small island became the front line of a battle for equal pay for Filipino workers overseas.

In October 2020, the Philippine Overseas Employment Administration (POEA), which has since been reorganized as the Department of Migrant Workers (DMW), adopted the federal minimum wage in the United States ($7.25 per hour or $1,256 per month) for Filipinos hired by U.S.-based contractors in the bases or installations in Diego Garcia and Guantanamo Bay, Cuba.

The Philippine government sets minimum wages for overseas Filipino workers through agreements with employers, recruiters, and other governments.

The POEA had previously set the minimum wage at $600 per month. The 2020 advisory would have put Filipino workers' salary on a par with employees in the private sector in the U.S. and in the federal, state, and local governments.

But Kellogg Brown & Root, Inc. (KBR), one of the largest U.S. defense contractors, did not comply, according to the Philippine government.

KBR Inc. as of this writing has not complied, according to the Philippine government. It’s the only one out of seven contractors employing Filipino workers in Diego Garcia that did not. 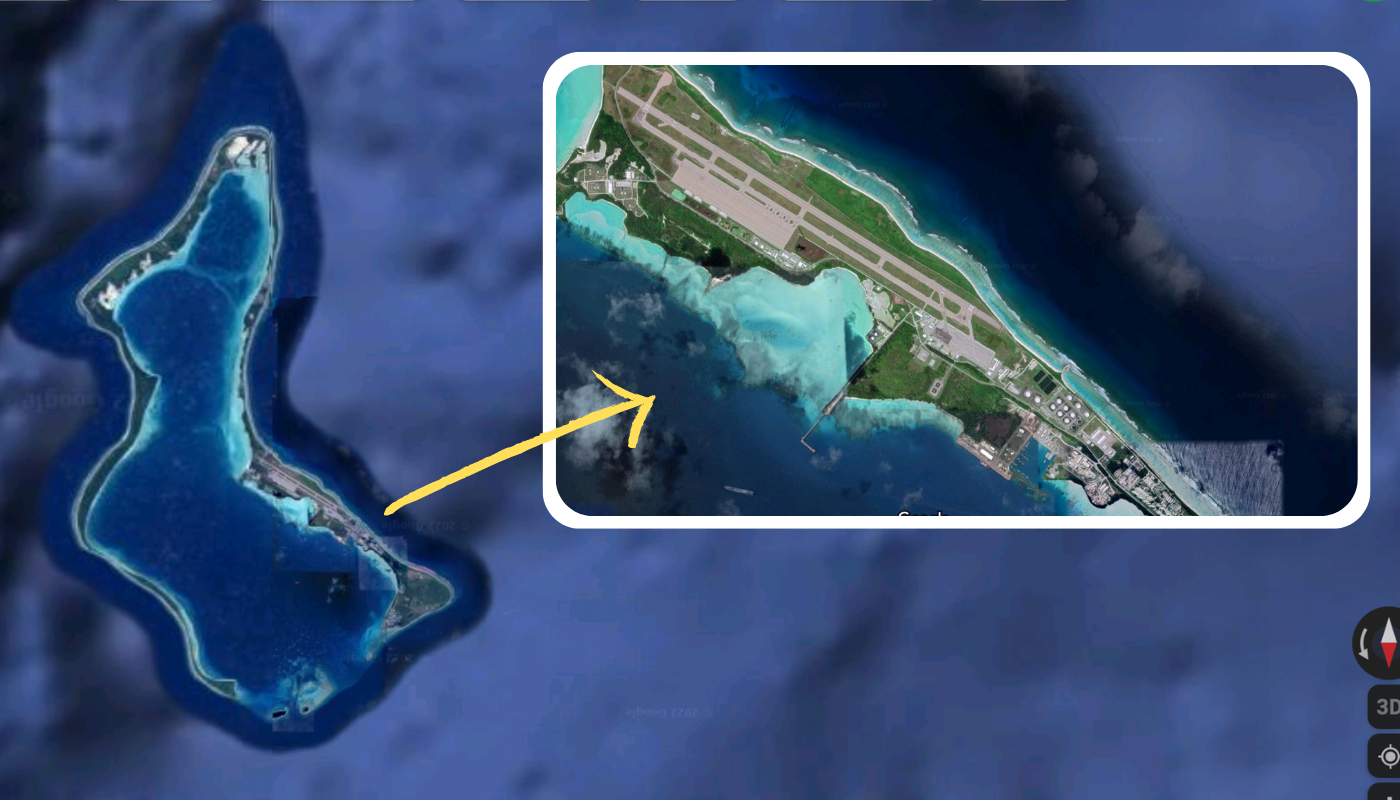 The Philippines considers the wage dispute a top concern, said DMW Secretary Susan Ople, a longtime advocate of the rights and welfare of overseas Filipino workers and whose appointment to the newly formed cabinet department was widely celebrated.

“A defense contractor’s desire for profit should not be at odds with the basic labor rights and dignity of its foreign workers,” she told the Philippine Center for Investigative Journalism (PCIJ) in a statement.

“We at the DMW are open to formal talks with the KBR management for the benefit of our OFWs, particularly on the issue of wage compliance and regular, unhampered vacation leaves,” she said.

But KBR denied to PCIJ that it was underpaying the Filipino workers. It said the company’s compensation policies “fully comply with POEA rules and regulations and are approved by POEA and POLO (Philippine Overseas Labor Office)” when other benefits are added in.

“Minimum total compensation for our Filipino employees exceeds the mandated hourly rate when housing, food, medical coverage, and other benefits are included,” KBR vice president of global marketing and communications Philip Ivy said in a statement.

“[It] is in accordance with the Philippine labor law definition of salary,” he added.

The Philippines said KBR was wrong.

“KBR is not correct in arguing that the computation of the minimum wage should include total benefits received such as food, housing, medical and other benefits. Under POEA rules, minimum wage is determined by the basic pay excluding the monetary values of food, housing, transportation – which are deemed free for the OFW and for account of the employer,” said Bernard Olalia, DMW undersecretary for adjudication and licensing services and concurrent POEA officer in charge.

Olalia has been leading the talks with KBR alongside DMW Undersecretary for Welfare and Foreign Employment Hans Leo Cacdac and Labor Attaché Angela Trinidad of POLO-Washington.

The wage dispute could have far-reaching implications. How it will be resolved may set a precedent for other contracts with Filipino workers in other U.S. military bases, said Joanna Concepcion, chair of the Filipino migrants group Migrante.

“This is just one military base. There are many other U.S. military bases [that employ Filipinos],” she said.

There are U.S. bases where U.S. contractors pay Filipino workers lower wages than in Diego Garcia.

In a naval base in Bahrain in the Middle East, a Filipino worker told PCIJ her salary was competitive only because she was directly employed by the U.S. government. The lowest salary grade for direct hires is 4, which corresponds to a salary of 450 Kuwaiti dinar (about $1,499 or P83,400).

Filipinos employed through manpower agencies, who typically work in catering and restaurants or as waiters and cashiers, receive monthly salaries amounting to 180 to 250 Kuwaiti dinar or about $550 (roughly P32,400).

The P32,400 monthly rate is higher than the salary for a similar job in the Philippines, but if the worker spends for his or her own food and lodging or transportation, the take-home pay is lower.

Concepcion said it was not fair for KBR or any other contractor to “rationalize” a deduction to the minimum wage because of additional benefits. The “nature of the work” is also important when computing the hourly rates of workers in Diego Garcia, she said, because they can’t easily leave the island base and their situation may be comparable to residential care facility workers whose employers have the responsibility to feed and house them.

Migrante, which has assisted Filipino workers in wage disputes abroad, does not represent workers in Diego Garcia and is not involved in talks with KBR.

‘Caught in the middle’

Filipino workers in Diego Garcia welcomed the POEA move in 2020, but did not expect a collision course between the Philippine government and their employer. As they bear the brunt of the now two-year-old dispute, not a few have come to regret it, fearful of losing  their jobs.

“We are caught in the middle of these issues…. It has gotten worse because until now we have not gotten anything, and a lot of Filipinos have resigned, they left because they have stayed long enough on the island,” one worker told PCIJ.

PCIJ spoke with four current and former workers in Diego Garcia. We are withholding their identities due to their fears of backlash.

The wage dispute has affected the vacation leaves of Filipinos, many of whom have been homesick and want to go home and see their families after prolonged lockdowns.

The workers told PCIJ that Filipinos earning below $1,000 had been forced to forego vacations for fear they might not be allowed to come back by Philippine authorities until KBR has adopted the new rate.

Some Filipino workers who were in the Philippines on vacation when the first advisory was issued in 2020 were only able to return to Diego Garcia after talks between the POEA and KBR, they said.

Filipinos in Diego Garcia said they had since been advised by KBR to resign if they insisted on taking a vacation, a claim that KBR denied. “We know of no KBR representative who has told a Filipino employee to resign. That would be contrary to our guidance and contrary to the fact that workers routinely leave and return,” said Ivy.

But there were Filipinos who had resigned to be able to go home to their families. Some workers believe these resignations have led to the cancellation of chartered flights to the Philippines to avoid a situation where KBR wouldn’t have enough workers on the island for the base to function properly.

A worker interviewed by PCIJ said many workers have resigned since 2021 that he now works 60 hours a week, or 10 hours per day. This is because he has to perform other employees’ tasks.

The worker, when he found out about the POEA advisory, decided to extend his contract instead of going home. He hasn’t returned to the Philippines in five years. First it was because of Covid-19 and later on because of the POEA advisory. While technically he can return to the Philippines and go back to Diego Garcia through Balik Manggagawa, he opted not to in the event that POEA becomes strict.

Olalia accused KBR of “emotional blackmail” in an September 2022 interview with the Washington Post, which first reported how hundreds of Filipinos had been stranded on the island amid the wage dispute.

“KBR has been preventing them from returning to the Philippines to be with their families unless they sign an extension of their contract based on the old minimum wage rate…. In effect, KBR is employing emotional blackmail by making their return to the Philippines conditional on their agreeing to an onerous contract. Not only is this unlawful, but it also violates the basic rights of these Filipino workers,” Olalia was quoted as saying.

In October, a month after the publication of the report, Olalia told the PCIJ the U.S. contractor had committed to allow the Filipino workers “to take their vacation leaves without fear of losing their jobs and without any conditionalities from both sides.”

Ramon* said things have gotten a little better for them since the talks started. While their salary is the same, DMW assured the workers earning below minimum wage that they could go back home to the Philippines and return to their jobs in Diego Garcia.

The wage dispute remains an outstanding issue, from which Olalia said the DMW would not back down.

“The POEA will stand by its Labor Advisory and is working closely with our Philippine Embassy in Washington DC as well as the Department of Foreign Affairs on this matter,” Olalia said. – With additional research by Martha Teodoro, PCIJ, October 2022

NEXT: Filipinos are underpaid all over the world