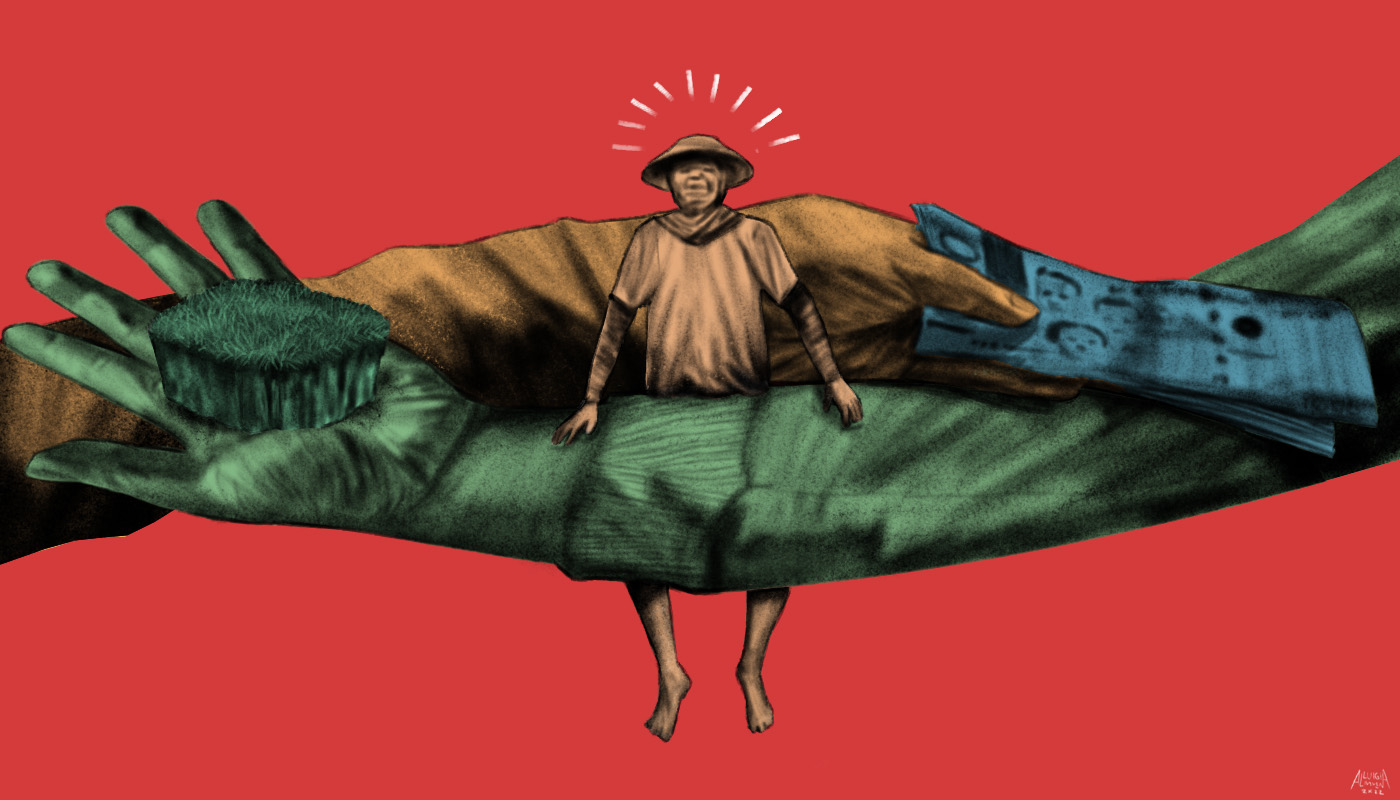 Even before the Cavite-Laguna Expressway (CALAX) project broke ground, Imus, Cavite has seen a massive conversion of farmlands at the behest of property developers.

Tenant-farmer Ernesto Jacobo said the two-hectare farmland whose tenancy he had inherited from his father would have been gobbled up by housing developers if not for the CALAX project.

Camella Bucandala, a house-and-lot development of the Villar family’s Vista Land & Lifescapes Inc., the biggest property and real estate developer in the city, boasts of its proximity to CALAX. It was a Villar scion, Sen. Mark Villar, the former public works and highways secretary, who broke ground on the CALAX project in 2017.

The Imus City Agriculture Office offers financial assistance to local farmers in a “plant now, pay later” scheme, but there are few takers.

Figures from the Municipal Agricultural Profile showed that Imus saw abundant harvests in 2015, with production increasing by 209.45%. The following year, production declined by 64.08% and has never recovered since.

Imus, in fact, is no longer considered an agricultural area under the provincial land use plan of Cavite, Marges said.

As farming is hard work and is no longer seen as a lucrative enterprise, children of farmers are no longer interested to till the land, he said.

Marges said many farmers, already in their mid-50s to 60 years old, were forced to sell their lands because no heirs would like to continue the "hard labor" of farming.

Jacobo disagreed and pointed to other factors, such as rampant land conversion and lack of government support.

Many descendants of farmers did not go to college. Hence, farming remained an option, he said.

(Many want to inherit the land. Many people prefer farming because they did not go to school.)

Even recipients of the city government’s incentives and recognition program for model farmers were not spared from the scourge of land conversion.

Prescila Igtiben, an information service specialist for the city government, said two “Magsasaka Siyentista” (farmer-scientist) awardees – Noel Bautista and Benjie Ilas – who were supposed to share their best practices with other farmers, were no longer active farm owners.

Bautista was awarded in 2017 for conducting research in farming and opening his three-hectare farmland as a techno-demo farm for hybrid rice. He also engaged other farmers and students in hybrid rice cultivation.

Ilas, who had 1.5 has. of farmland in Imus, was awarded in 2016 for his mushroom and fish culture innovations.

Igtiben said both farmers were forced to sell their farmlands when developers built structures around their properties, resulting in reduced soil fertility and damaged irrigation systems. Paths for the transport of goods were blocked.

(If the land you are farming is in the interior, and the land in front has been sold, you have nowhere to go. They don’t have a choice but to sell the land.)

In a 2007 study, researchers Isidoro Malaque III and Makoto Yokohari of the International Institute for Environment and Development blamed both the increasing number of approved applications for land use conversion and the decreasing number of farmers’ descendants interested in farming for the decline in agriculture. 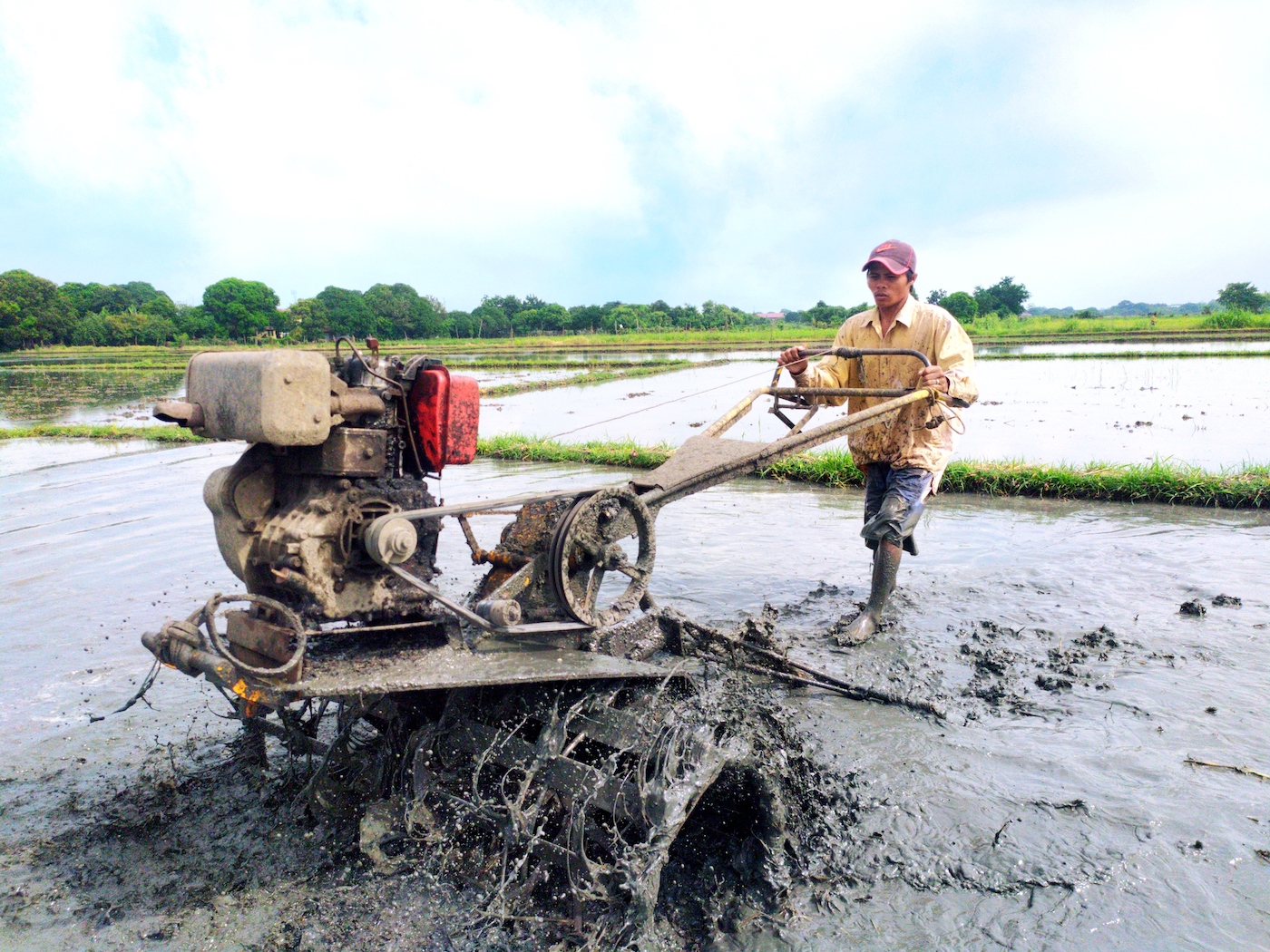 TOP PHOTO: Rodel Barcelon, who has been farming for 10 years in Imus, plows the land to prepare it for planting crops. Barcelon is one of the few farmers in the city who are set to be displaced by the Cavite-Laguna Expressway project. Photo by Paul Jeffrey Peñaflor

Of 1,071.63 has. of agricultural land left in Imus, only 430 has. were “productive agricultural areas” for rice and crop production, while the remaining were left idle, Marges said.

Jacobo said lands usually became idle because the owners, dissatisfied with small returns from farming, were preparing to sell or convert them to other uses.

Government agriculturists interviewed by the Philippine Center for Investigative Journalism (PCIJ) said buyers of idle lands would often declare the plots as no longer irrigable nor arable, which triggers the conversion process.

Seeking approval for conversion would be tedious if the city agriculture office found out that the land was still arable and had a working irrigation system.

Buyers would halt the production of crops for a year or two, declare it idle, and request a reclassification to residential or commercial use.

Lack of interest on the part of owners, buyers and farmers to farm idle lands provided an opening for real estate developers, local agriculture officials said.

Provincial agriculturists called for Cavite to be declared an "agricultural province" so the local government would be able to craft policies or ordinances to save agricultural lands or strengthen land use conversion policies.

Such a declaration will reinforce the conversion moratorium, a provision of an administrative order in 1997 from the Department of Agrarian Reform (DAR) that prohibits the conversion of irrigated and irrigable lands within the Strategic Agriculture and Fisheries Development Zones (SAFDZ).

The SAFDZ are areas identified for production, agro-processing, and marketing activities. The conversion of these areas is subject to a five-year conversion moratorium, and not more than 5% of the land can be converted.

Under the 2002 Comprehensive Rules on Land Use Conversion, all agricultural lands with irrigation facilities are areas that are “non-negotiable for conversion.”

Section 65 of Chapter XV reads, “...when the land ceases to be economically feasible and sound for agricultural purposes, or the locality has become urbanized and the land will have a greater economic value for residential, commercial or industrial purposes, the DAR, upon application of the beneficiary or the landowner, with due notice to the affected parties, and subject to existing laws may authorize the reclassification or conversion of the land and its disposition.”

“Hindi kami ang nagsasabing mag-convert (We are not the ones who say that land can be converted),” Costa said.

Costa said the provincial agrarian reform office saw no problems in processing land conversion applications since these were in "adherence to the provisions of a moratorium, and zoning ordinances implemented by LGUs."

(In the provincial office, our function is ministerial; we only post notices and issue certifications of posting compliance, which are vital documentary requirements for conversion.)

Marges puts a positive spin on the boom in real estate, saying it’s an opportunity to shift to urban farming.

(There are vacant areas where they can do container gardening, even if there is no land, you can do gardening.)

Marges, however, admitted that community farming was not an alternative to traditional farming.

(Here in Imus, I don't think agriculture will disappear. It can be reduced but won’t be totally gone.)

Farmers must still grapple with the threat of their livelihoods being bulldozed and getting nothing for it.

Nenita Ramos, secretary of the farmers' group in Imus, said they were hoping that the government and the developers would at least build common facilities such as a public elementary school and a basketball court in their village.

She said displaced farmers could not afford to send their kids to nearby private schools.

(We don't have a school here and a basketball court. It is our dream to have an elementary school or an extension of the high school here.)

Jacobo expressed resentment when asked about the conversion of agricultural lands into subdivisions and roads.

“Hindi ka naman makakabili sa pinaggaga-gawa nilang bahay dahil milyon (You can't buy the house they are building because it costs millions),” Jacobo said, referring to the real estate developments that had gobbled up neighboring farmlands.

Resigned to the inevitable, Jacobo simply wants to get his share of the proceeds of the sale of the farm he had tilled for 40 years. He plans to buy a house and pay for his grandchildren's education.

(Money has many uses. I will buy a house because I don't have my own house.) END