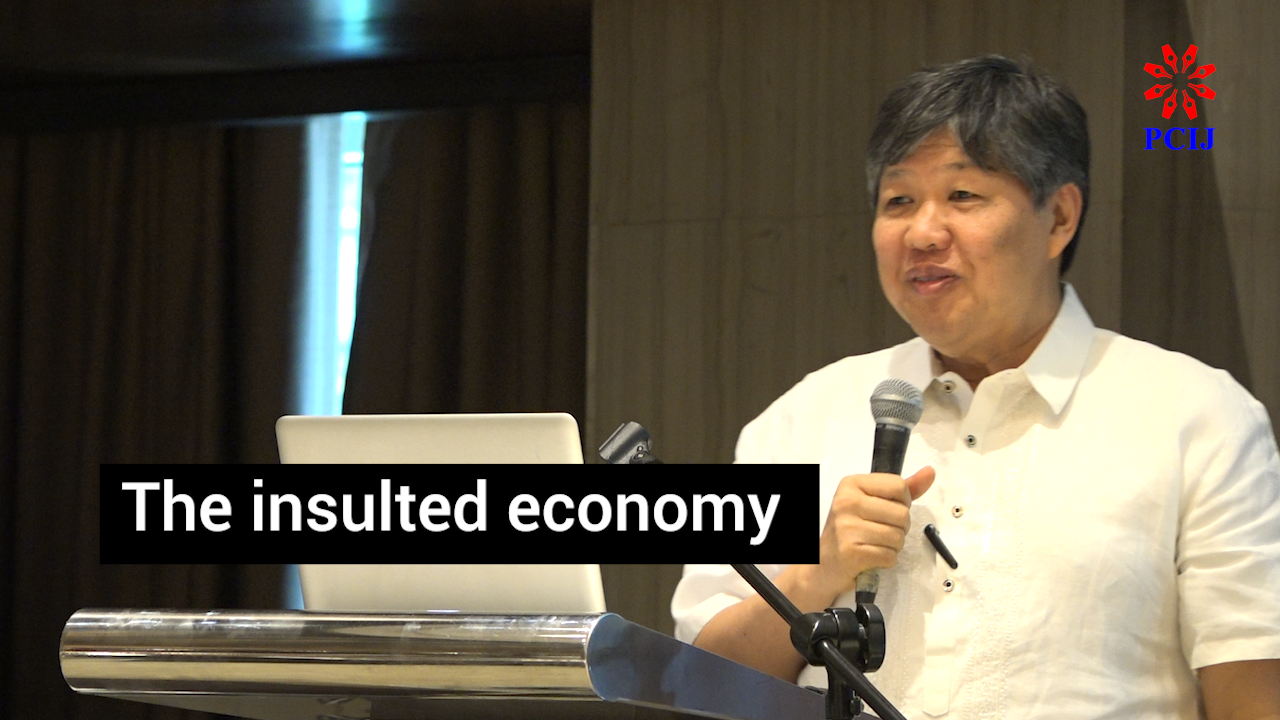 State of the PH in 2018: The Insulted Economy

WHAT is the true state of the economy, and the status of economic and policy reforms, under two years of the Duterte administration?

WHAT is the true state of the economy, and the status of economic and policy reforms, under two years of the Duterte administration?

What follows is the presentation, by text and graphics, of Dr. Emmanuel S. de Dios of the University of the Philippines School of Economics, at the forum on “Democracy and Governance in the Philippines: Deficit, Surplus, and Unfinished Business” that was organized by the Philippine Center for Investigative Journalism, in partnership with the Office of the Ombudsman of the Philippines and the Right to Know, Right Now! Coalition, on July 5, 2018, in Pasig City, Metro Manila.

Unexploited potential
* Growth rates still substantially below what other countries achieved in similar episodes – and below government’s own targets of 7-8 percent.
* Demographic dividend not fully used: shrinking labour force and fewer jobs despite a growing population. 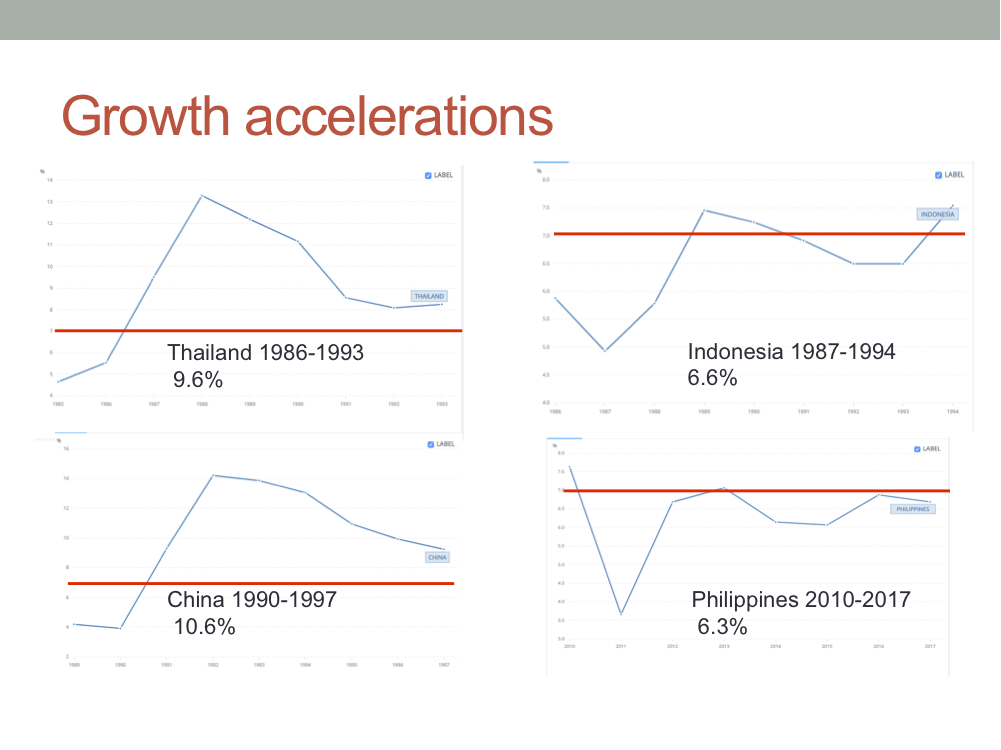 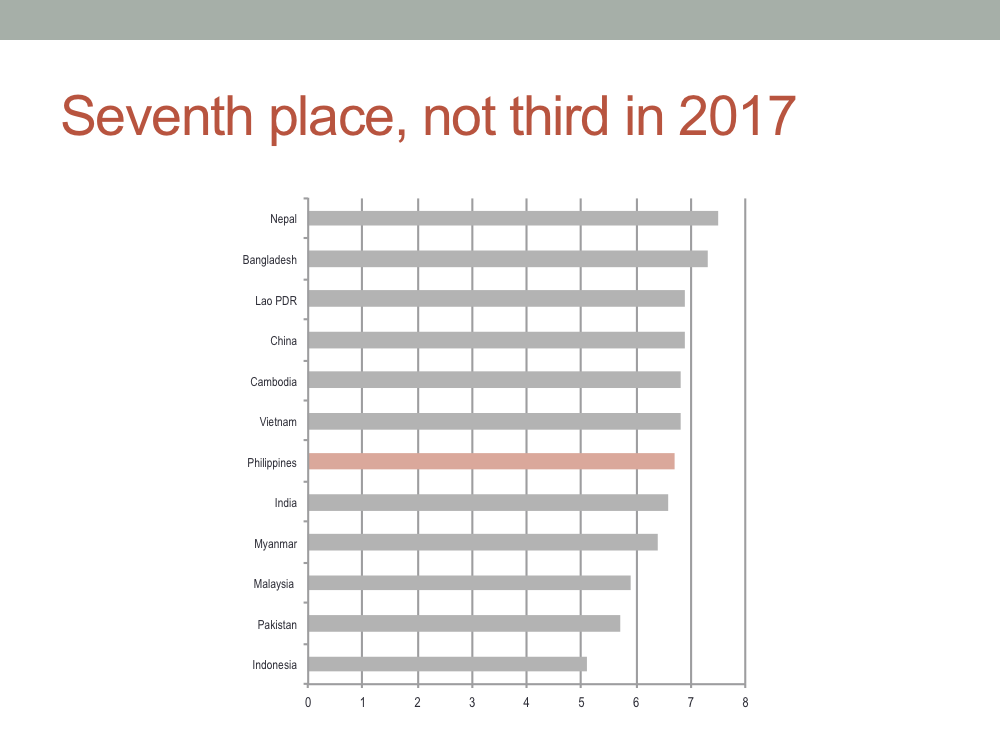 Even Laos and Cambodia grew faster 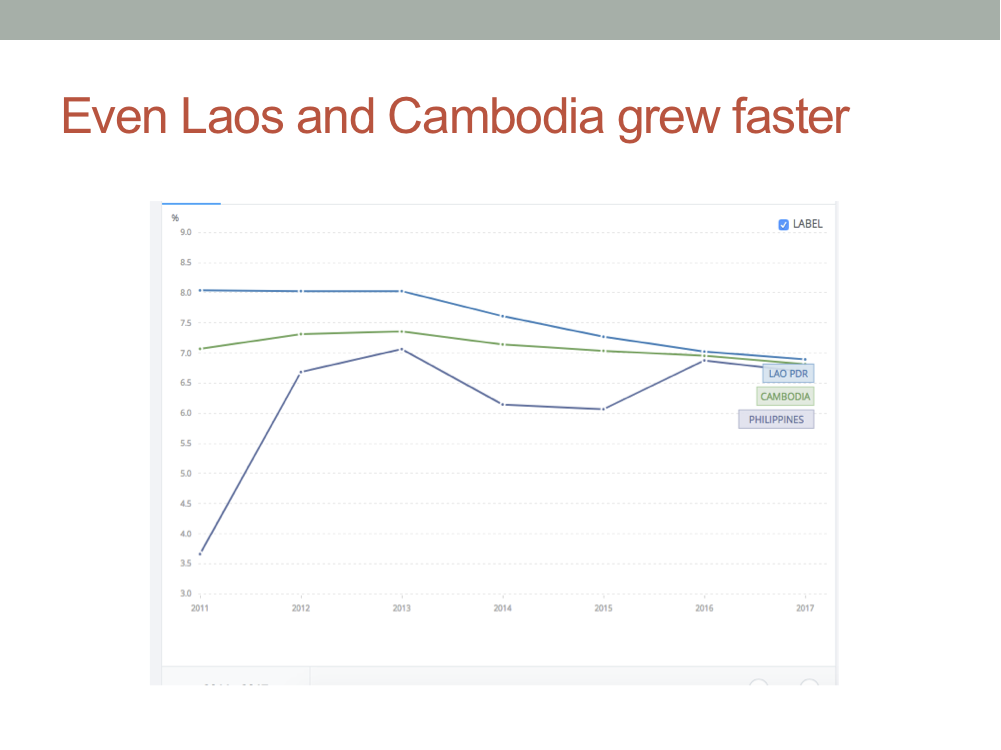 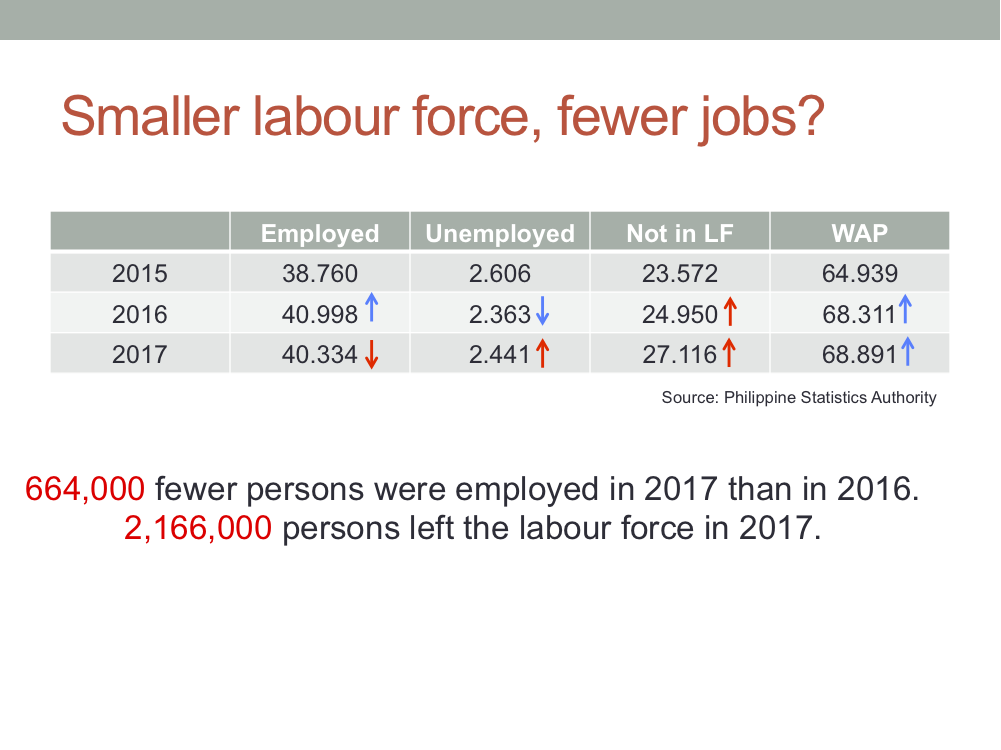 The administration’s analysis and strategy
* Identify infrastructure bottlenecks as main constraint to growth
* Hence the “3-Build” programme
* Allowance for higher deficit ceiling up to 5% of GDP
* Emphasis on public infrastructure spending
* To keep deficit in check (at 3% of GDP), a tax reform programme (TRAIN 1-5). 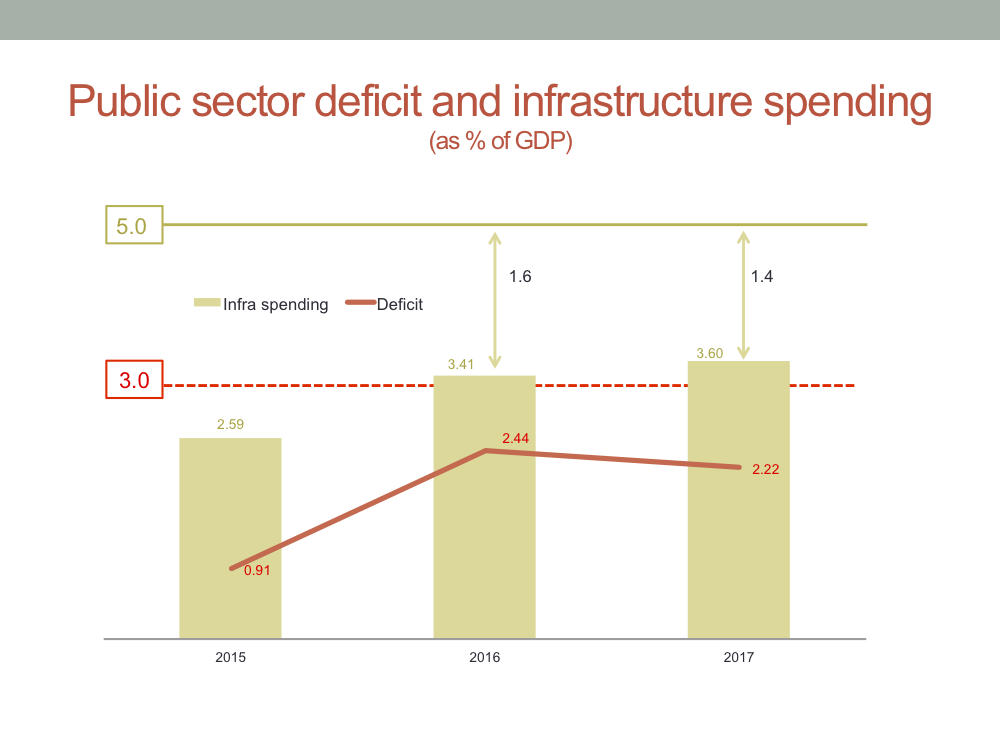 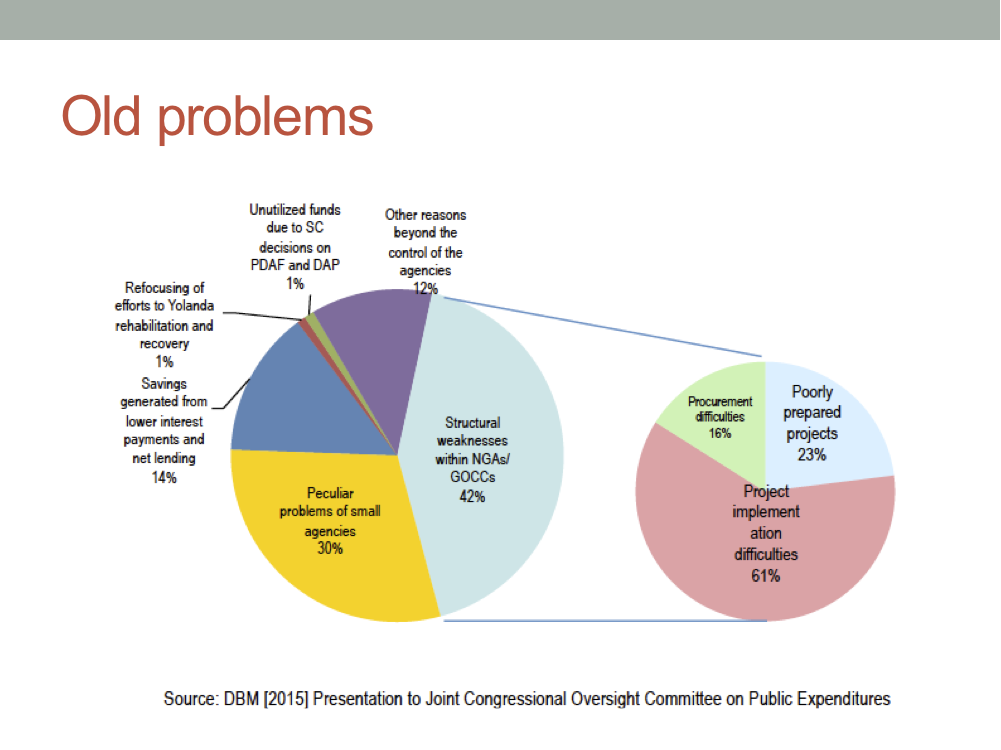 Lax infra spending: repair and replace versus new investment
Revenues intended for BBB may be pre-empted by consumption spending and waste. As a result revenue generation may have to run simply in order to stand still. A disruptive process.

New inflation (deed of many hands)
1. Impact of TRAIN through fuel and “sin” products
2. Exchange-rate movements because of capital outfloqws and behind-the-curve monetary policy
3. Muddled rice policy
4. Failure to account for inflation expectations

Inflation in the CPI and food 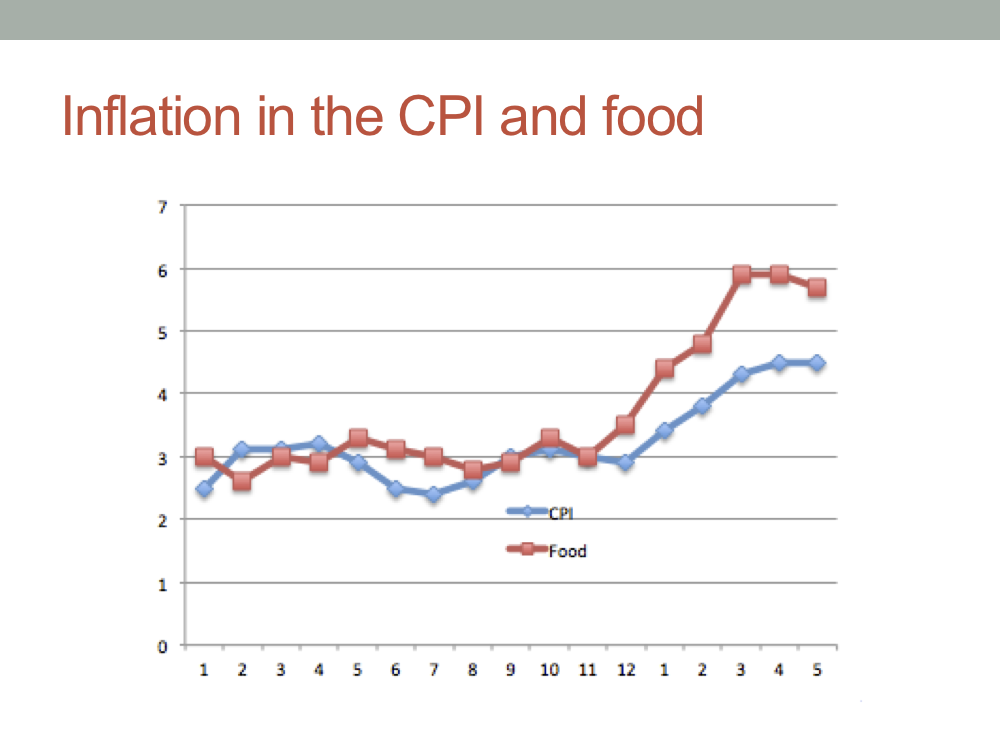 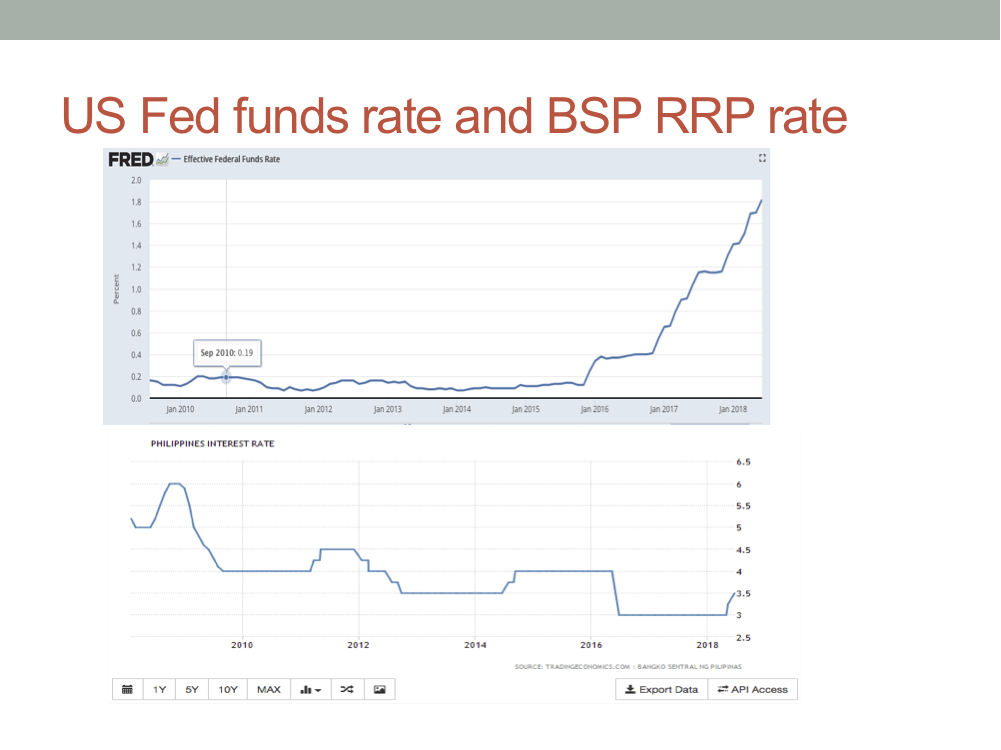 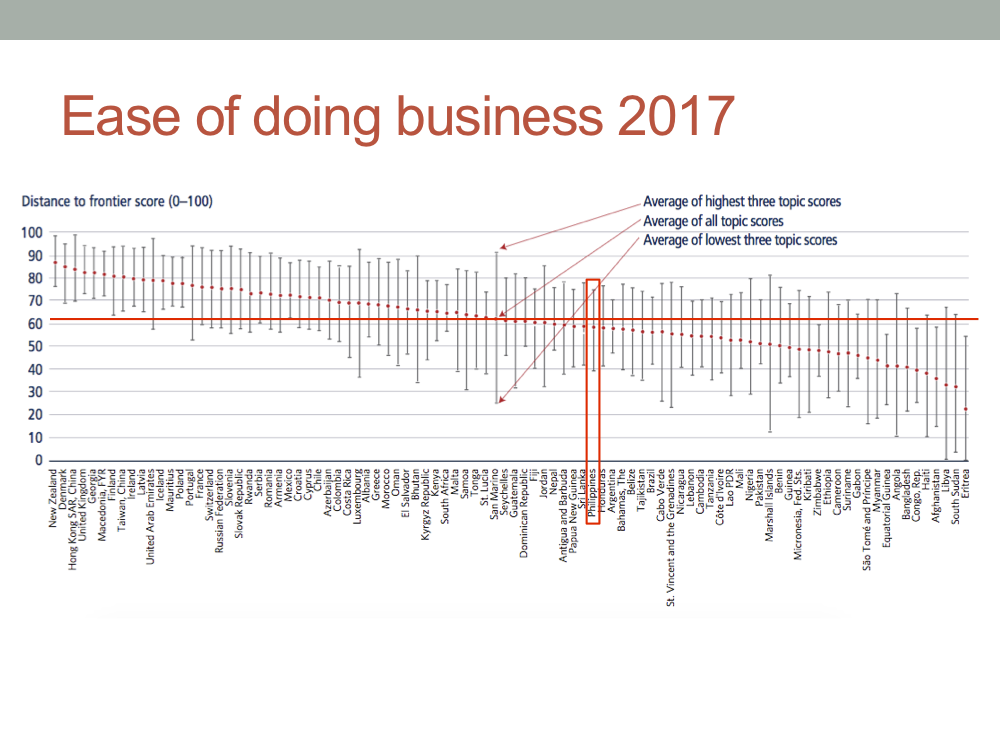 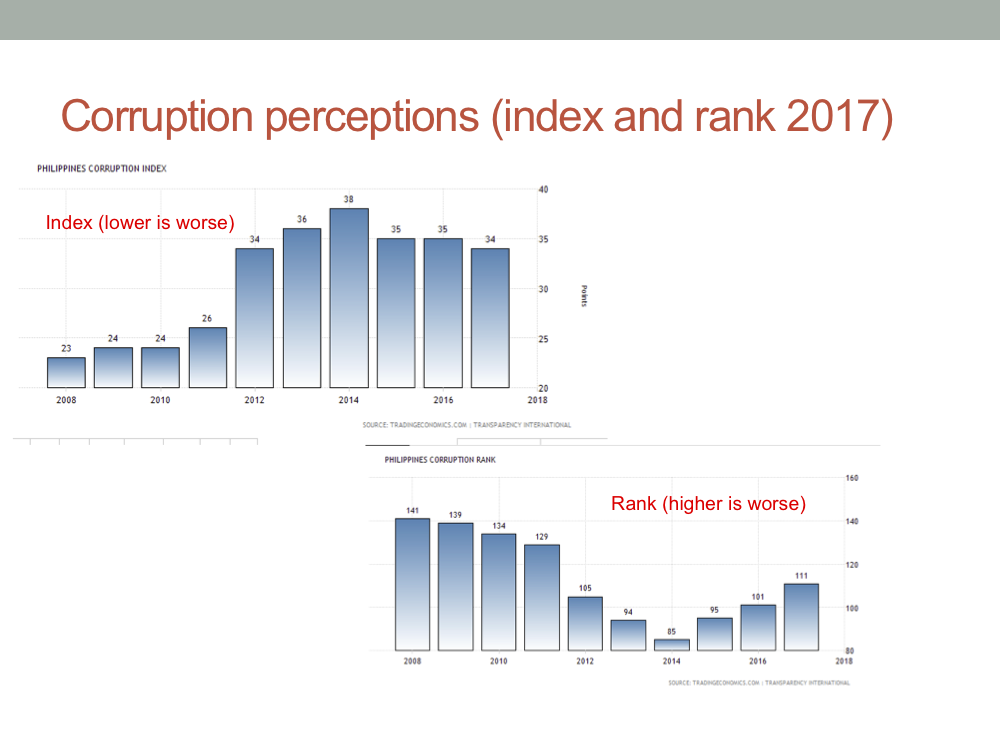 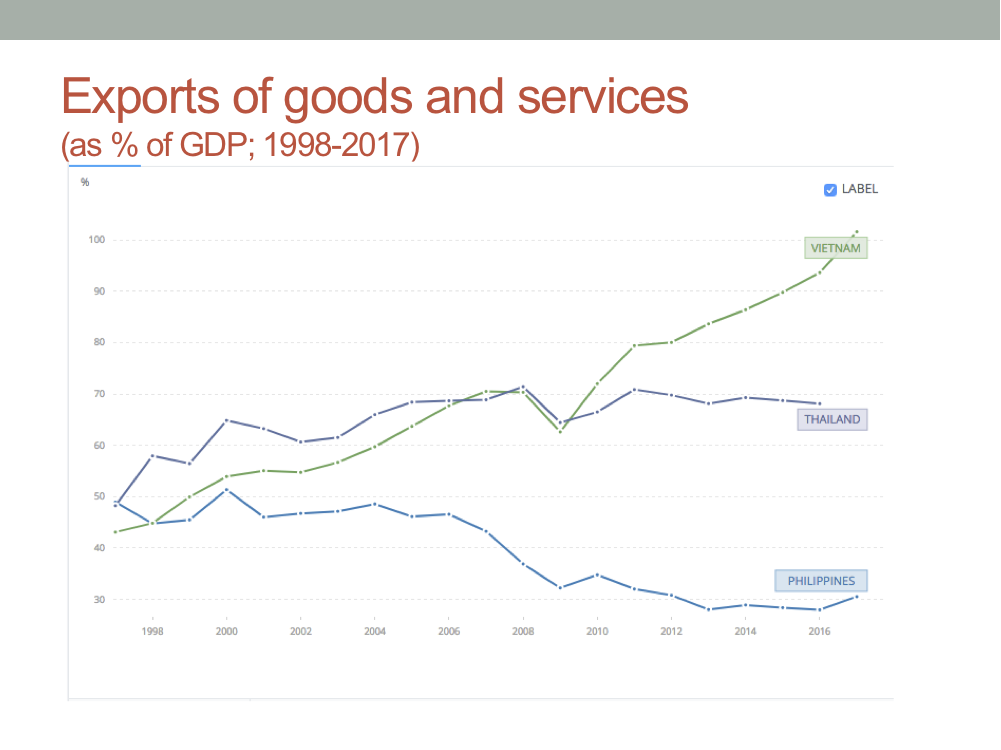 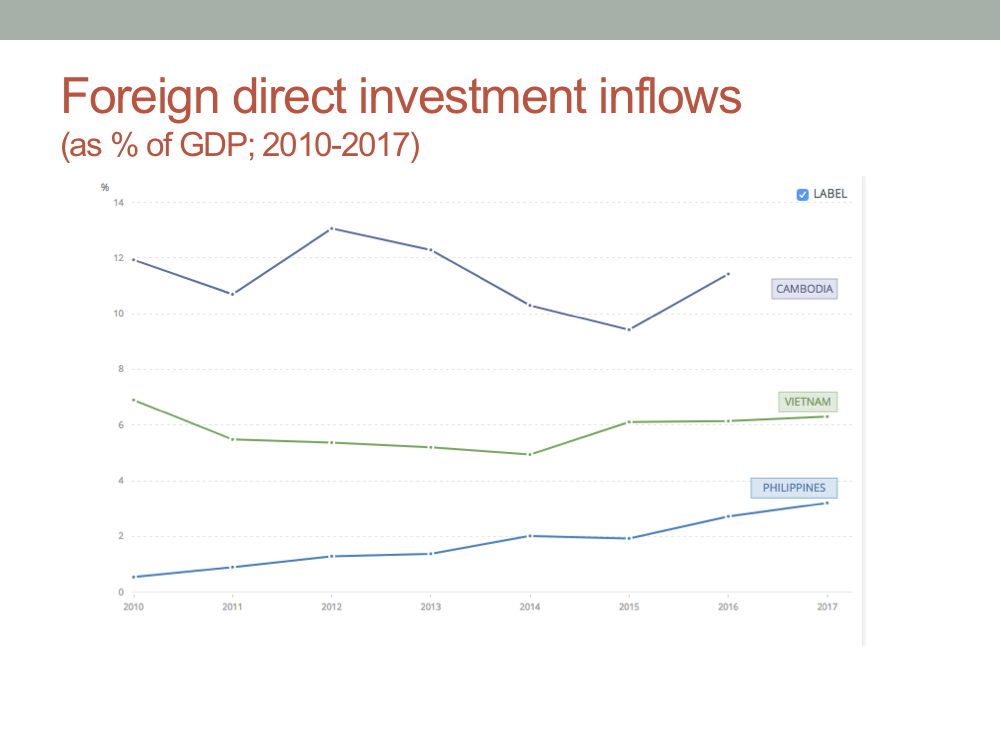 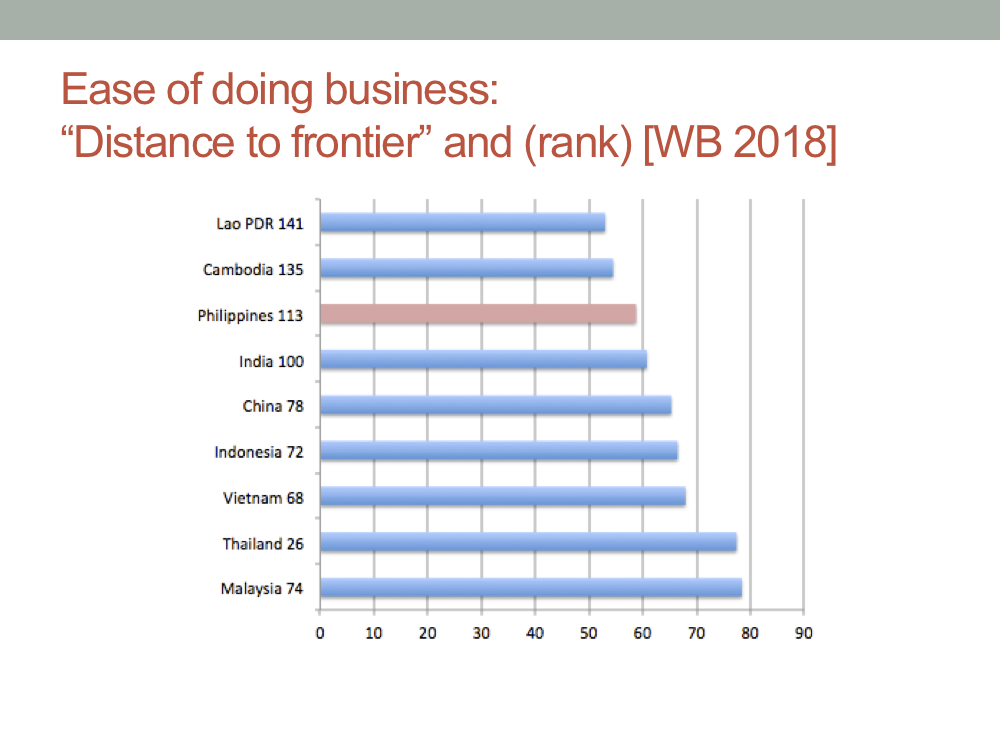 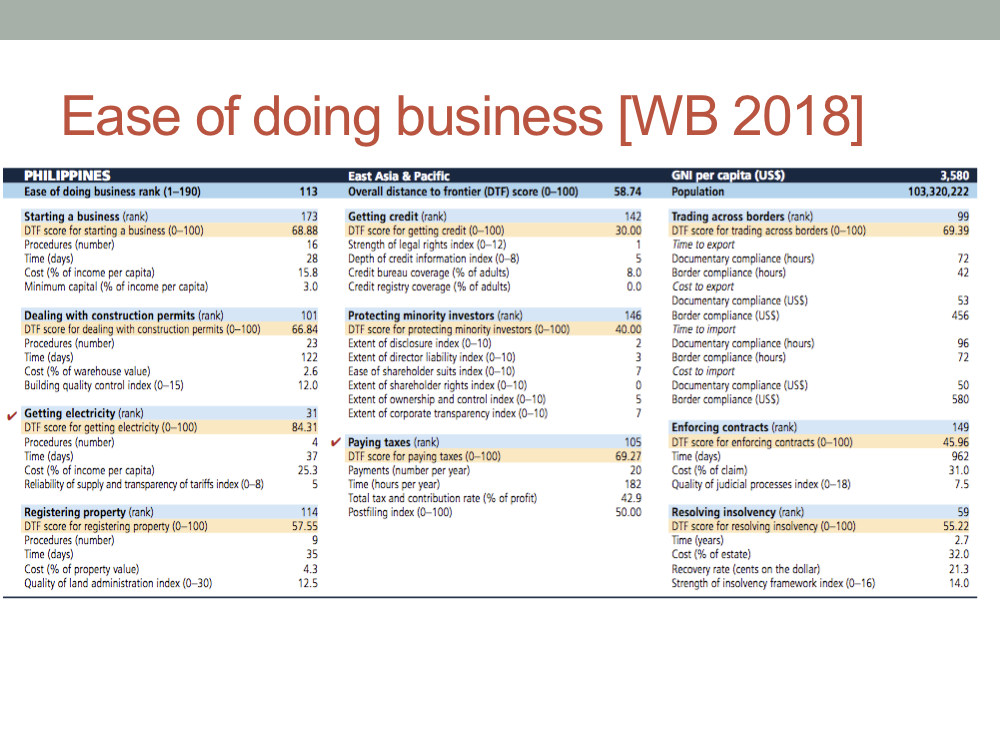 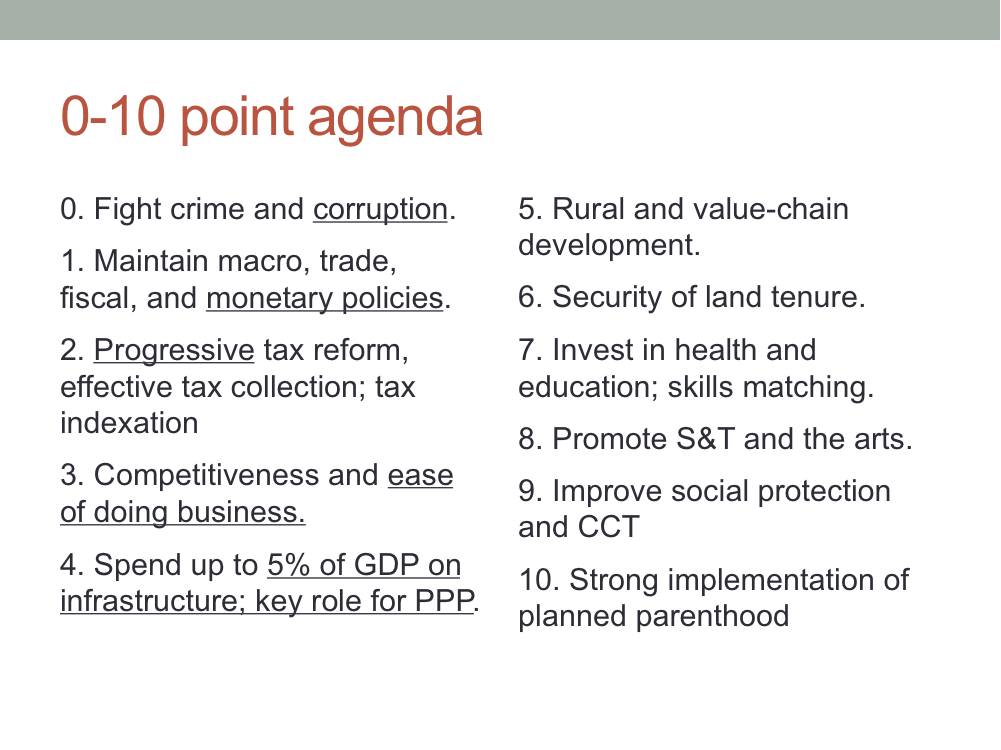 insult (noun): in medicine: an event which causes damage to a tissue or an organ
– Oxford English Dictionary

INGLORIOUS INSULTS TO THE ECONOMY 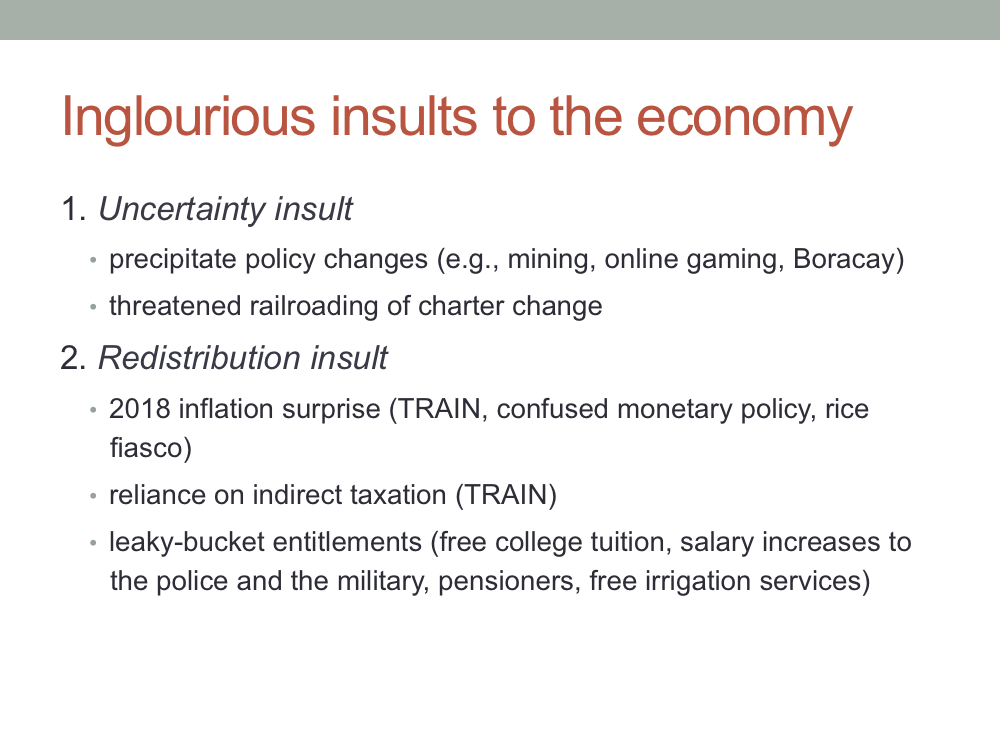 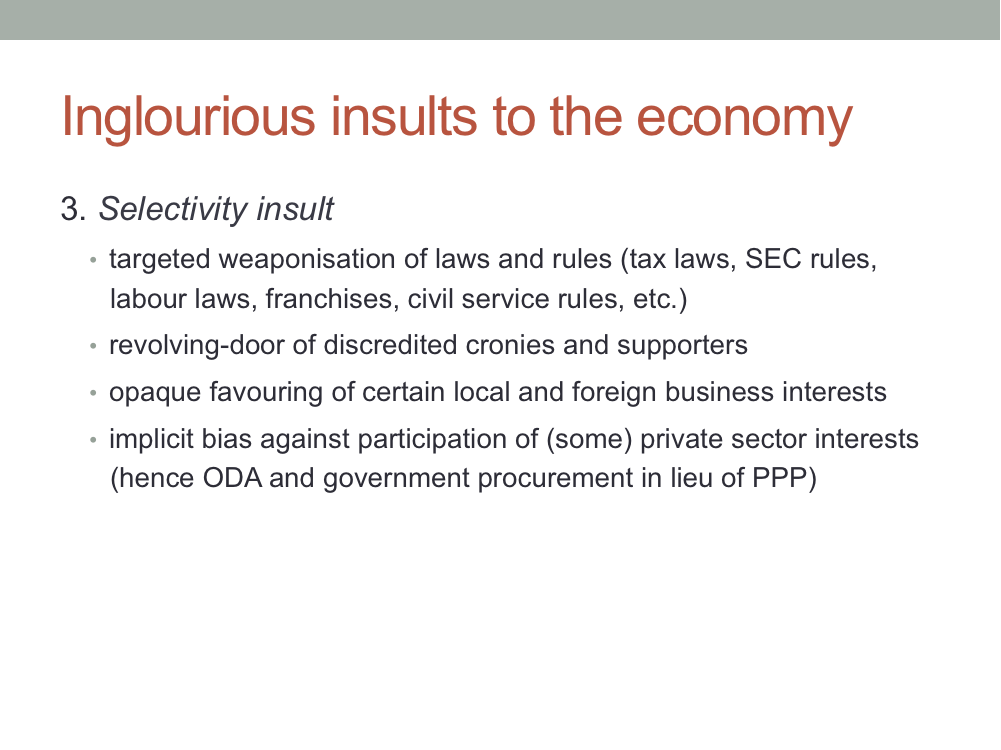 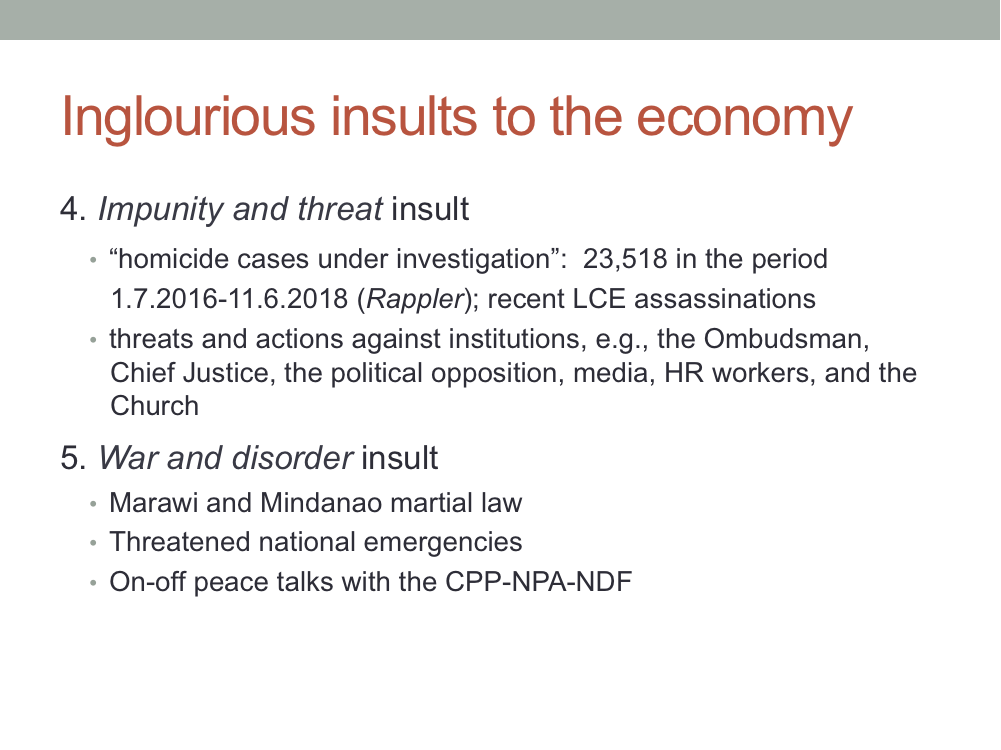 Despite the President’s seeming disinterest in economic policy, what throws a shadow over business and the economy is the demonstration of overarching power – power without checks, without accountability, and without regard for custom, values, or history.

More than the soundness of policy, it is unbridled power – and its selective application – that is the source of worry for business and the people under the Duterte administration.