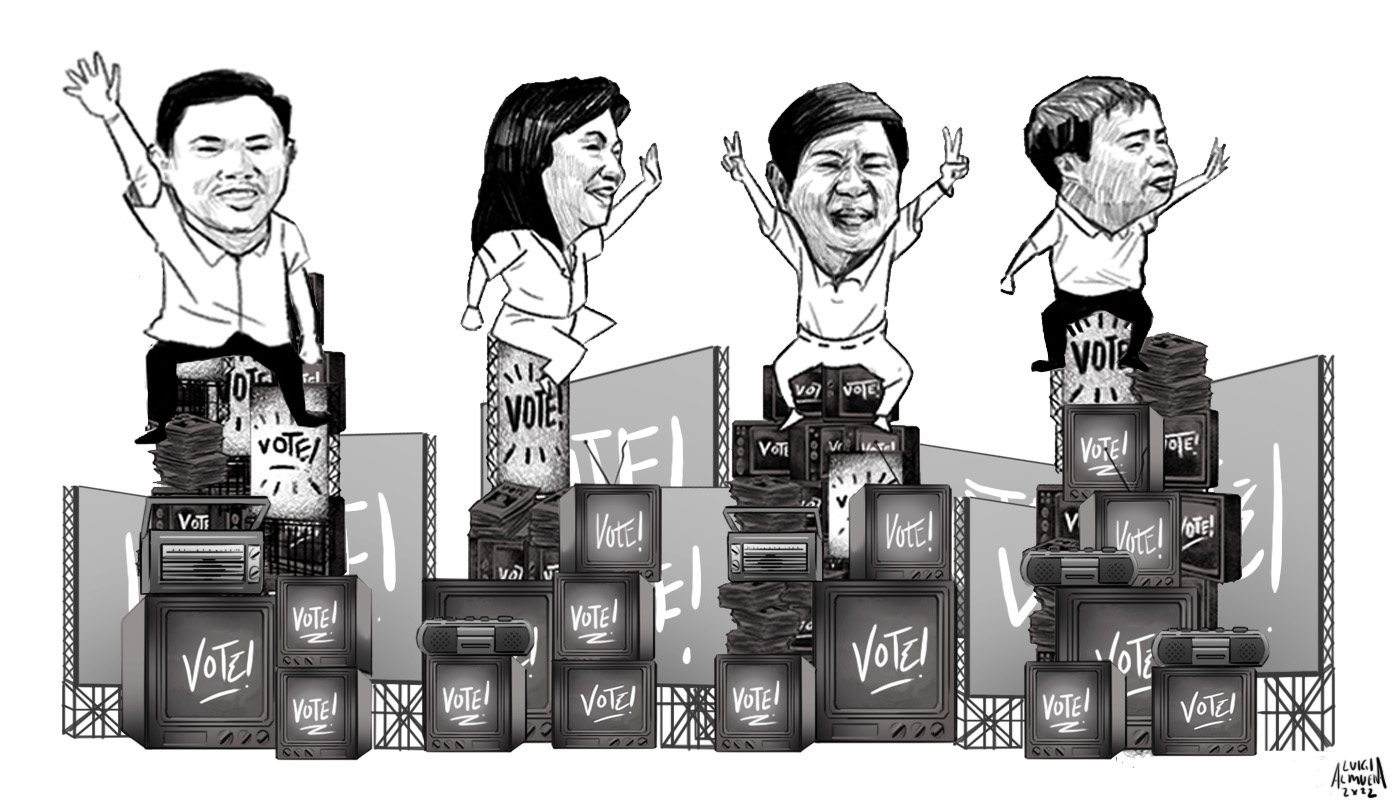 ‘Where did the money come from?’

Four candidates in the May 2022 elections appeared in ads worth more than P1 billion each on mainstream media while an average of P209 million worth of ads were aired daily by national candidates during the 90-day campaign period demonstrating how expensive it has become to run for public office in the Philippines.

Data from Nielsen show that President Ferdinand Marcos had ads worth P1.10 billion from Feb. 9 to May 7 while his closest rival, former Vice President Maria Leonor Robredo, had ads worth more than P1.15 billion.

The Philippine Center for Investigative Journalism (PCIJ) acquired the ad spending data of candidates from Nielsen Ad Intel. The database covers their spending on television, radio, print, and billboards based on rate cards or before campaign teams may have availed themselves of discounts. 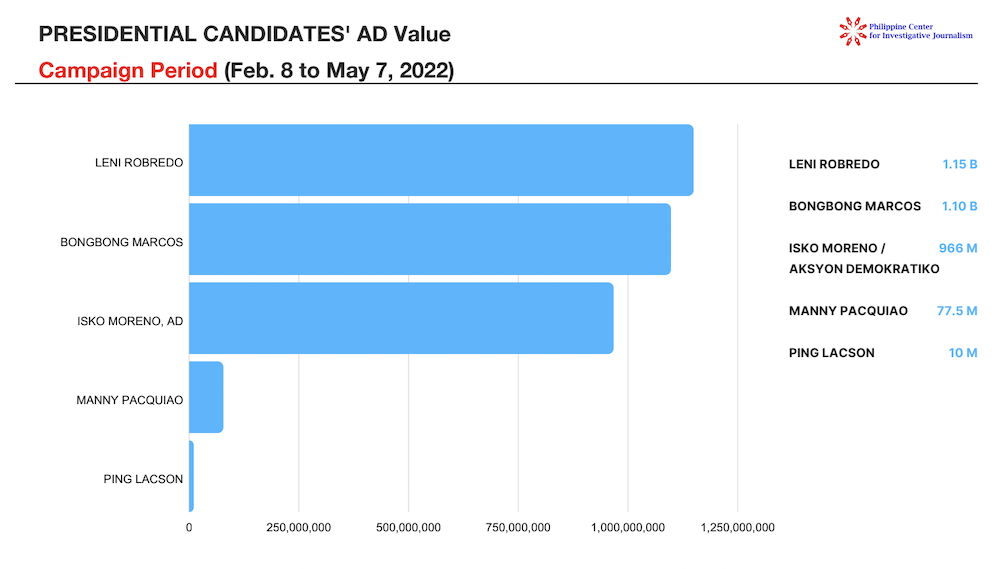 Among presidential candidates, former Manila Mayor Francisco “Isko Moreno” Domagoso was short of about P40,000 to also breach P1 billion. He aired ads worth P966.50 million during the campaign period.

‘Where did the money come from?’

Former elections commissioner Luie Tito Guia said the massive spending of candidates in the 2022 elections should be a “wake up call for us to push for policy and administrative reform.”

Legal Network for Truth Elections (LENTE) executive director Rona Ann Caritos added: “When we talk about campaign finance, one good principle to have in mind is a level playing field. Dapat pantay-pantay ang mga kandidato sa elections. [Right now] it’s not a level playing field, if you are a rich candidate, you have the advantage. If wala kang pera, then luging-lugi ka talaga.”

Guia and Caritos wanted the candidates’ donors identified. “Where did their money come from?” Guia asked.

Candidates have submitted their Statement of Contribution and Expenditures or SOCE, which they were required to submit on June 9 or one month after the elections. They are required to identify their donors in their SOCEs, but the Commission on Elections has yet to release the documents in full.

Paolo Maligaya of the National Citizens’ Movement for Free Elections said electronic copies of SOCEs should be released to the public.

Preliminary SOCE data obtained by the PCIJ showed that President Marcos and Vice President Duterte relied entirely on donations to fund their campaigns.

“Campaign finance should be looked at as an anti-corruption and a good governance issue more than it is an election issue. We should be looking at points where conflicts of interests may arise,” said Guia.

“Why are big business interests and personalities putting their money in elections to support particular candidates? Sometimes you can look at donors as venture capitalists… It’s an investment and they are expecting returns,” he said.

Lente’s Caritos also proposed limits on contributions, saying more Filipinos should participate in funding elections. “It cannot be bankrolled by a few people or a few companies,” she said.

The Philippines imposes limits on spending but not on contributions.

The numbers do not include candidates’ spending before the campaign period, where the country’s law imposing ad limits does not apply.

Sen. Joel Villanueva was the biggest ad spender before the campaign period. He recorded airing ads worth P1.73 billion from Jan. 1, 2021 to Feb. 8, 2022, putting the total worth of ads he appeared in before the elections to P2.78 billion.

The five other candidates who breached P1 billion in total worth of ads aired from January 2021 to May 2022 are Gatchalian, Marcos, Binay, Legarda, Zubiri, and Estrada.

Caritos said the old definition of a candidate should be restored. “How fair the playing field is starts with the definition of the candidate. If you are a poor candidate, you don’t have the resources to spend [before the campaign period].” 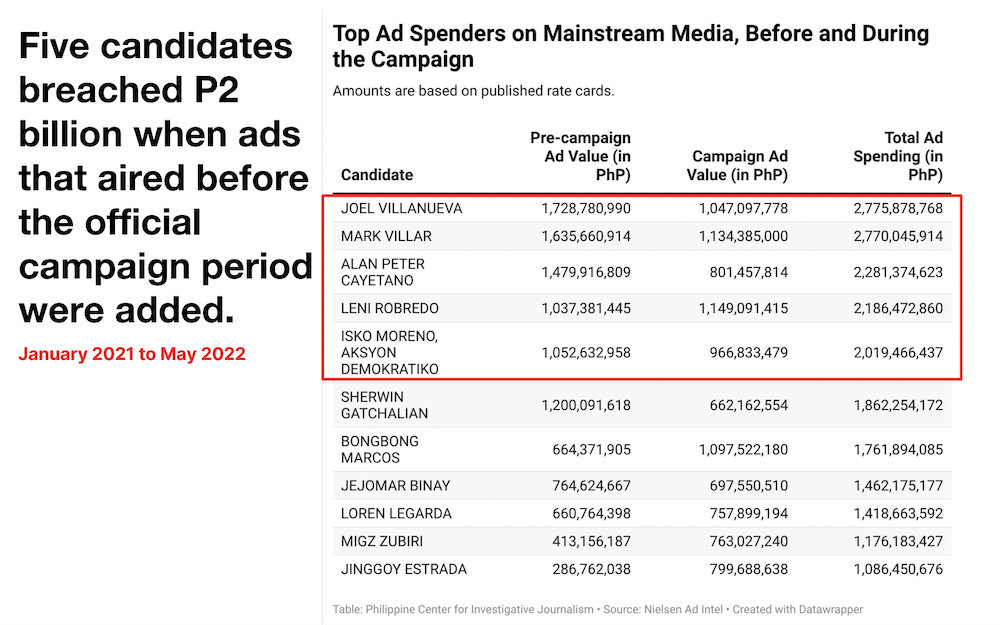 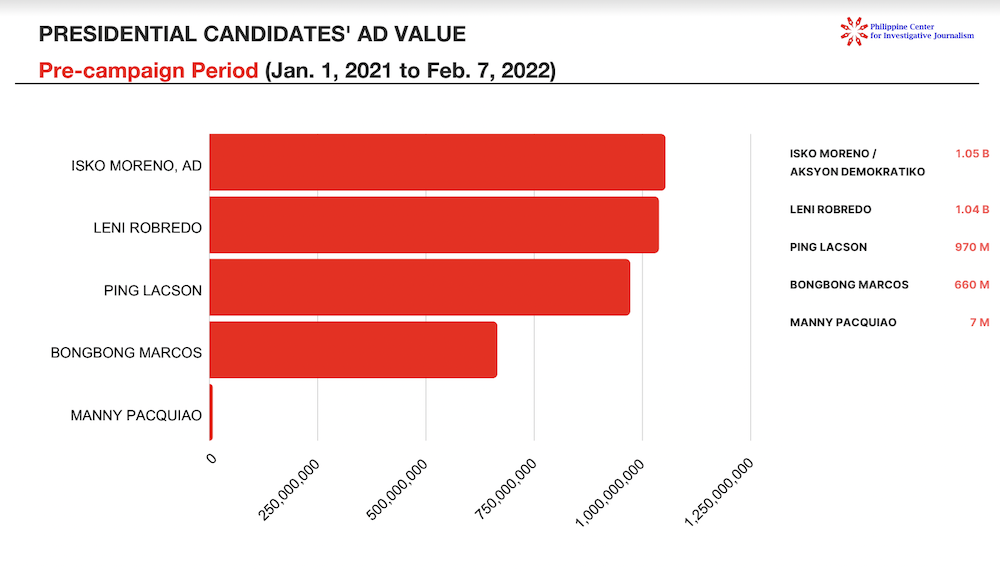 On social media, Robredo recorded the most number of ads on Facebook although the bulk of the ads were paid by her supporters on the platform.

Facebook’s Ad Library showed that P58.75 million was spent to promote Robredo’s candidacy during the 90-day campaign period. Out of this amount, only P11 million worth of ads were posted in her official pages.

Franciso “Isko Moreno” Domagoso had ads worth P27.79 million on Facebook. It was paid almost entirely by his supporters.

Presidential candidate Leody de Guzman’s supporters also paid for ads worth P16,192. He did not air ads on mainstream media, based on Nielsen’s data.

Disinformation researchers singled out social media influencers supporting Marcos for shaping the 2022 elections. There are influencers who may have been paid to promote candidates but the transactions were not captured by the Ad Library.

Marcos denied employing troll farms to push his candidacy but studies show, including one by academe-led fact-checking group Tsek.ph, that he is the main beneficiary of false or misleading content on social media, while Robredo had been the “biggest victim.”

Based on the SOCEs, Marcos spent the most among all candidates. He reported expenditures totaling over P623 million, which was supposed to have been entirely paid by contributions in cash and in kind.

Marcos’ total donation appears to be the largest in electoral history. This is due in part to the raised allowable limit because of the increase in the number of registered voters.

Marcos’ rivals in the May 2022 elections were more frugal or had difficulty raising more funds than their 2016 counterparts.

Robredo, the second highest spender based on her SOCE, reported expenditures totaling P388 million, which was almost entirely paid by donations.

Among senatorial candidates, Villar reported total expenditures amounting to P131 million. He used his own money on his campaign, based on his SOCE.

Watchdogs have casted doubts on the truthfulness of candidates’ declarations, however.

“We always question the truthfulness in terms of reporting,” said Arwin Serrano, national trustee of the Parish Pastoral Council for Responsible Voting. He said “everything has to be properly accounted for” including non-monetary donations of entertainers and other personalities who may have been paid by the candidates’ supporters.

“The best way of addressing this issue is to increase spending limits. Those limits are no longer applicable,” said Serrano.  — with reports from Karol Ilagan and Cherry Salazar