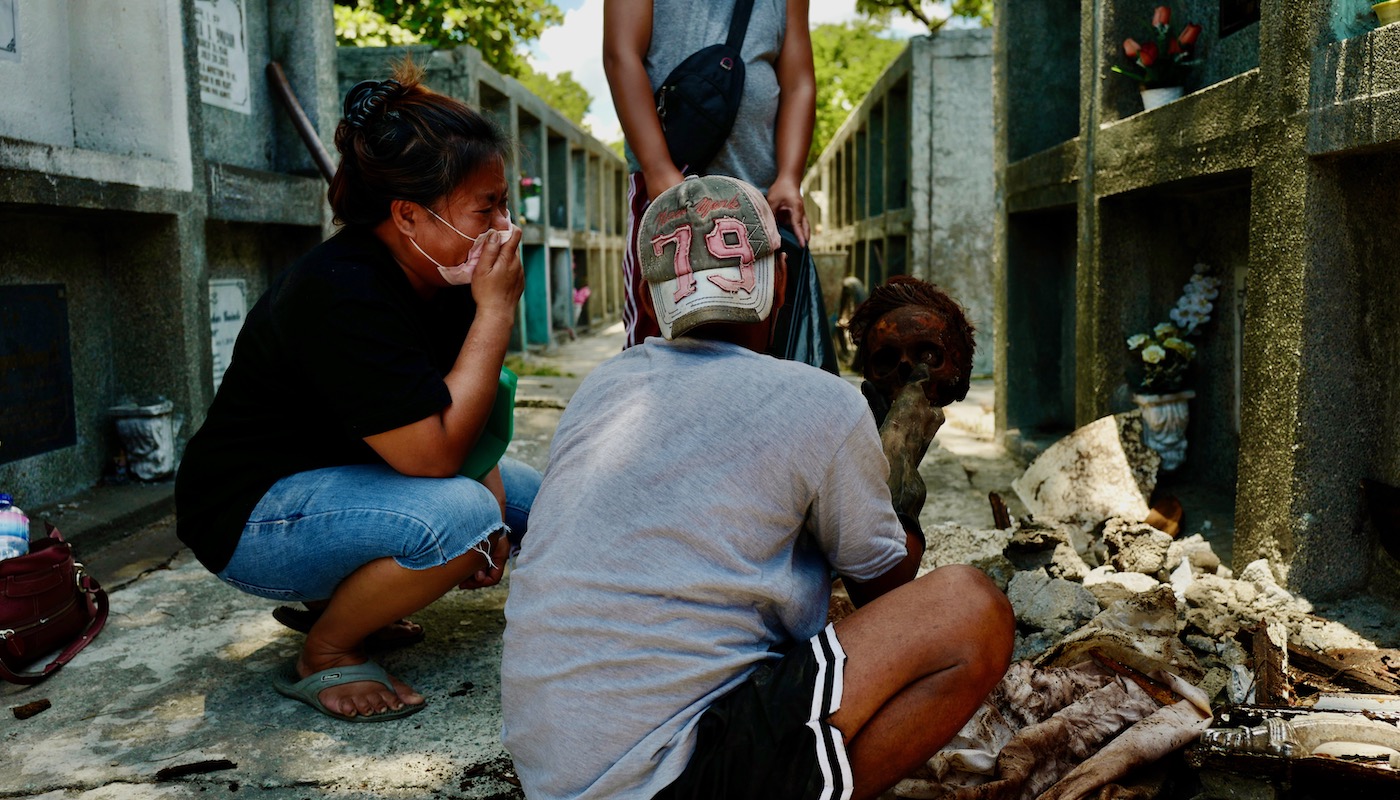 On the hot and humid morning of May 13, 2022, Luzviminda Siapo came to visit — for the last time — the “apartment grave” that housed the remains of her son, Raymart, at the Our Lady of Lourdes Eternal Park in Malabon City in the country’s capital region Metro Manila.

She had faithfully visited the cemetery since Raymart’s death in 2017, but that day was to be her last visit, because the five-year lease on his temporary grave had expired.

Luzviminda’s situation was shared by many  grieving relatives of victims of President Rodrigo Duterte’s war on drugs.  Many of the families are poor, unable to afford permanent graves for their loved ones. Just like Our Lady of Lourdes, other temporary gravesites only keep the remains for five years.

Duterte, elected president in 2016, immediately ordered the police to “kill them all” drug pushers and users. Indeed, thousands were killed without due process of law. As he neared the end of his six-year term, many of the grave leases began to expire, and the exhumation of the remains of drug war victims began, reviving the misery of surviving family members.

Raymart’s remains were scheduled for exhumation and dumping at an ossuary, where unclaimed remains are deposited. Luzviminda tried to save money to renew the lease on her son’s grave, but what she earned from selling barbecued innards was barely enough to provide for her two other children.

She sought assistance from organizations, including a church group in Manila that insisted on cremation over reinterment. When Luzviminda refused cremation for Raymart,  the church group closed its doors.

She begged more people for help, and received just enough money to cover reinterment fees in another, more affordable cemetery.

Luzviminda yearns, “Ang gusto ko pag namatay ako pagsamahin ang buto namin para man lang makasama ko ang anak ko ulit. Yan ang pangarap ko magkasama kami sa libing (When I die, I want my remains to be joined with my son’s remains, so I can be with him again. That is my wish–-for us to be together in death).”

Like many relatives of drug war victims, Luzviminda dreads cremation for Raymart.  But other families  are constrained to agree to free cremation services — doing away with grave lease requirements — because most of them are poor and unable to extend the lease or secure a reinterment.

The lease on Raymart’s grave expired on May 9, 2022, four days before Luzviminda’s final visit. It was election day in the Philippines, when over 50 million Filipino voters trooped to the polls to decide Duterte’s successor.

Luzviminda hoped that Vice President Maria Leonor “Leni” Robredo would win. She held on to Robredo’s promise to hold an independent probe on the bloody drug war, and allow international investigators into the country.

But it was the son and namesake of the late dictator Ferdinand Marcos who won the presidential contest — by a landslide. Marcos Jr., or Bongbong, had previously said he would only allow international investigators to travel to the country as tourists.

Luzviminda feared that justice for her son and other victims of Duterte’s drug war was unlikely. But it was a worry for another day. That particular day at the Our Lady of Lourdes Eternal Park, she had to make sure she didn’t lose her son again.

She had been inconsolable on her way to the cemetery. On the bus, the stranger seated beside her watched her cry during the two-hour ride. Uncertainty, misery, and deep longing for her son tortured her mind, but her seatmate on the bus did not know that.

Had he asked, he would have learned that Luzviminda was to reunite with her son who was abducted and killed by 14 armed men just hours after a neighbor accused him of selling marijuana in 2017.

She arrived at the cemetery around 11 a.m. with her two-year-old son in tow. She was so distressed she had forgotten to bring the box that was supposed to hold Raymart's bones.

The mother of three had nothing but a pink shoulder bag and a green folder that contained the documents on Raymart's case, including her plane ticket from Kuwait five years previously.

Two cemetery caretakers greeted her and asked how she intended to carry Raymart's bones. When Luzviminda said she did not have anything, they took two black garbage bags and said, "This will do."

Before the caretakers knocked down Raymart’s grave Luzviminda crouched down before it and lit four white candles. Then, she peered into a hole beside the tomb marker, as if waiting for her son to come out and greet her.

The moment was solemn and heartbreaking all at once, even for the jaded cemetery caretakers. No one spoke or moved until Luzviminda finally stood up and left for the administrator's office to secure Raymart's release documents.

The caretakers took that as a signal to begin tearing down the temporary grave that bore Raymart's name, date of birth, and the day he died.

Cockroaches crawled and flew as the caretakers pulled out the bottom of Raymart’s humble coffin.

They presented his bones to Luzviminda to show her that Raymart's remains, barong, and pants were intact.

Luzviminda raised one hand to cover her mouth, and she wept for her oldest child, now a heap of bones in a crumbling coffin. She stared at what was left of Raymart, whose dreams and innocence were violently snatched by the bloody drug war.

She inspected his bones, hoping she could find the bullet that would provide clues about his murderer.

Then the cemetery workers picked up the bone pieces one by one, and dumped them in the garbage bags.

Luzviminda’s toddler, the baby brother Raymart never got the chance to meet, looked on innocently. He probably thought the men were merely collecting garbage. He picked up pieces of trash and threw them in the plastic bag.

After they finished, the men crumpled the garbage bag and handed it over to the weeping mother.

Luzviminda walked away from her son’s torn-down grave with trash bags in her hands. 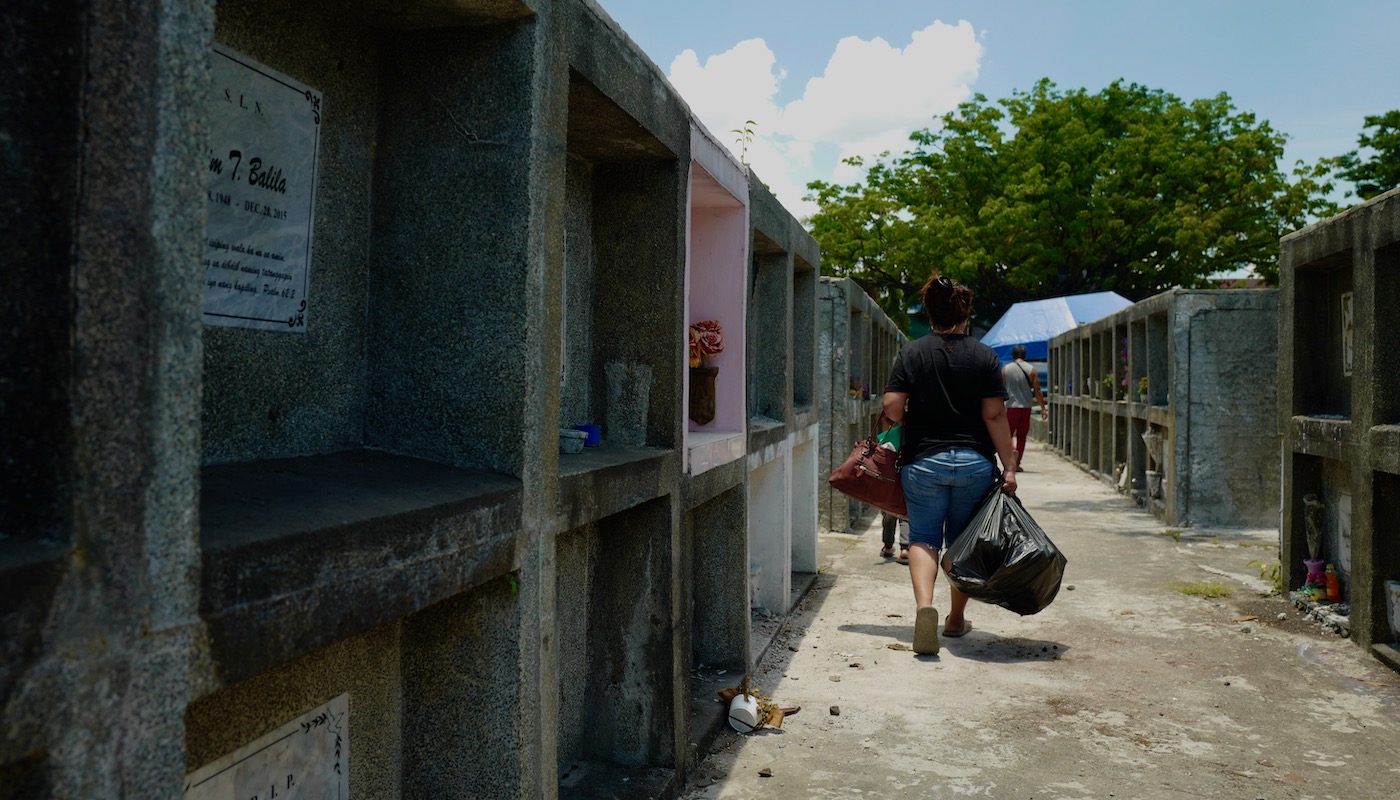 Luzviminda Siapo said her son was abducted and killed by armed men hours after a neighbor accused him of selling marijuana in 2017. PHOTO BY BROTHER JUN SANTIAGO III, CSSR.

Luzviminda's pitiful state when she retrieved Raymart’s remains at Our Lady of Lourdes mirrored her condition when she flew back into the country in April 2017 to seek justice for her murdered son.

In her rush to fly home, she was only able to bring her handbag and a box of toys for her then 9-year-old daughter.

She could not bring her clothes home because her employers in Kuwait refused to believe her story about Raymart.  She begged them to allow her to see her son one last time; they refused to give her permission to fly home until she knelt and kissed their feet three times.

It was at the height of the drug killings when armed men wearing ski masks abducted Raymart at a friend's house just hours after village officials confronted him with drug accusations at the barangay hall in Navotas City.

According to his uncle Bong, the killers even dropped by their house first and asked about Raymart's whereabouts before proceeding to the site, where they kidnapped him.

Frustrated with the police, Luzviminda conducted her own investigation, and learned that her son was forced to ride a motorcycle with the group that abducted him. Raymart was last heard crying for help from anyone he saw on the street. His abductors drove him around until they reached a dark spot in Bangkulasi.

From her own inquiries, Luzviminda said she learned that the  kidnappers ordered Raymart to get off the motorcycle and run.

Raymart couldn’t run even if he wanted to, she said. He suffered from clubfoot and had difficulty even just walking.

His abductors allegedly ordered him to sit down instead. Then, they shot him twice in the head, she said.

Luzviminda said there was no proper investigation into Raymart's death and the police did not actively pursue his case. No witness has ever surfaced to identify the perpetrators.

Six years later, the reported number of killings in Duterte’s drug war has breached 6,000, excluding those that disappeared. Some say the number could be as high as 30,000. The figures change depending on whether one is talking to the police or to human rights advocates.

On her way there,  she held on tightly to the black plastic bags containing Raymart’s remains, much the same way she clung to his unadorned white coffin the night she arrived from Kuwait. She took her youngest child’s tiny hands and placed them on the garbage bags containing her oldest child’s remains, and said: "Si kuya (Your brother)."

At La Loma Cemetery, Raymart's bones were washed, scraped, and dried before they were turned over to the columbary. One of the two bone cleaners that assisted Luzviminda wore a green baller bracelet that said “Sara Para Sa Bayan (Sara For The Nation).”

“Laman ba ng anak ko ang kinikiskis niyo? (Are you scraping away my son’s flesh?),” she asked, adding “Nalalaman ba pag tinorture (Would you know if he was tortured)?”

Despite her inquiries and desire to seek justice for her son, Luzviminda does not want a second autopsy on Raymart's remains unless it guarantees that the case will be solved.

On her request, Raymart’s bones were reconstructed "para makita ko ulit siya ng buo (so I can see him whole again)."

The 3 p.m. sun shone harshly on her face and on Raymart's remains. The bone cleaners worked quietly nearby, while the toddler, Raymart’s baby brother, played by the mausoleums.

Luzviminda stroked Raymart's skull as if combing his hair with her fingers. She gazed at her son’s reconstructed skeleton one last time before telling the workers to pack it all up. They are finally ready for Raymart’s reinterment in what is hopefully his final resting place. END