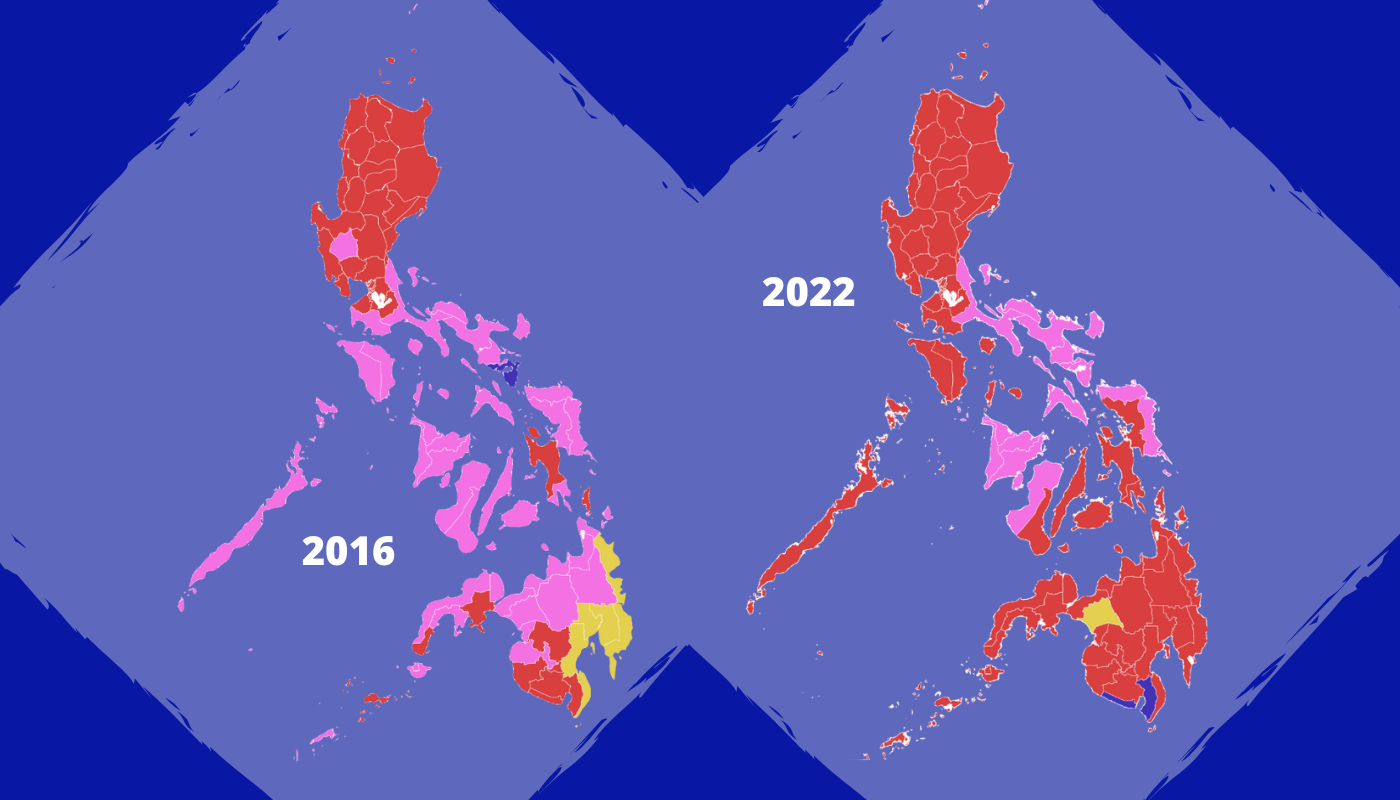 Marcos doubled, tripled or more his 2016 vote in many provinces

The supporters of both former Sen. Ferdinand Marcos Jr. and Vice President Maria Leonor "Leni" Robredo were enthusiastic nationwide. But the turnout for Marcos was sensational even in areas where Robredo dominated.

BY CARMELA FONBUENA WITH RESEARCH ASSISTANCE FROM MARTHA TEODORO May 11, 2022

The 2022 elections gave the son and namesake of the late Philippine dictator Ferdinand Marcos a historic victory. Marcos Jr. got over 31 million votes compared to Robredo’s almost 15 million votes, based on partial and unofficial tally of election results which already account for more than 98% of election returns.

Over three decades after the 1986 EDSA popular uprising ousted the Marcoses, many voters have no memory of, forgotten, forgiven, or refused to believe the brutality of his regime. (READ: Marcos leads presidential race amid massive disinformation)

How did the regions and provinces vote in the presidential elections?

The supporters of both Marcos and Robredo were enthusiastic nationwide, but the turnout for Marcos was sensational. He doubled, tripled, quadrupled or more his 2016 votes even in Bicol and Western Visayas regions where Robredo kept her lead.

Robredo’s 2016 votes were shaved significantly in many provinces but she also gained votes, albeit modestly, in many others — including provinces where she was defeated.

The election results reflected how the presidential elections became a two-way race between the two candidates. 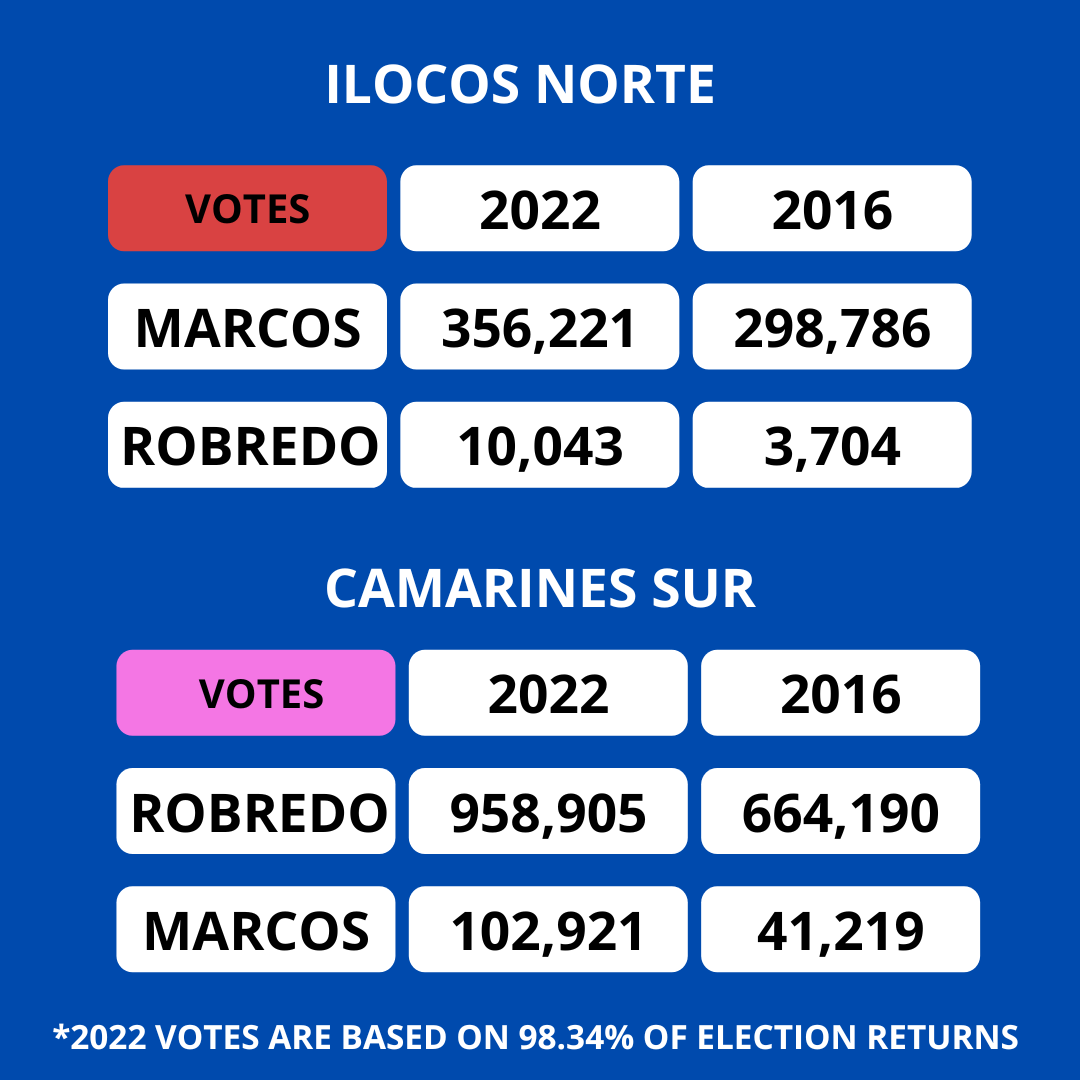 But Robredo also almost tripled her votes in the province — from 3,704 in 2016 to 10,037 in 2022 — a small victory reflecting the efforts of her small but dedicated supporters in the area.

These patterns are repeated in many provinces. In Iloilo province, where Robredo received over 720,000 votes, Marcos received over 450,000 votes. It was almost fives times what he received in 2016. It's the only province among the country's ten most vote-rich provinces to favor Robredo.

Marcos tops 63 out of 81 provinces

Marcos topped 64 provinces and all cities and municipality of the National Capital Region while Robredo led in 15. 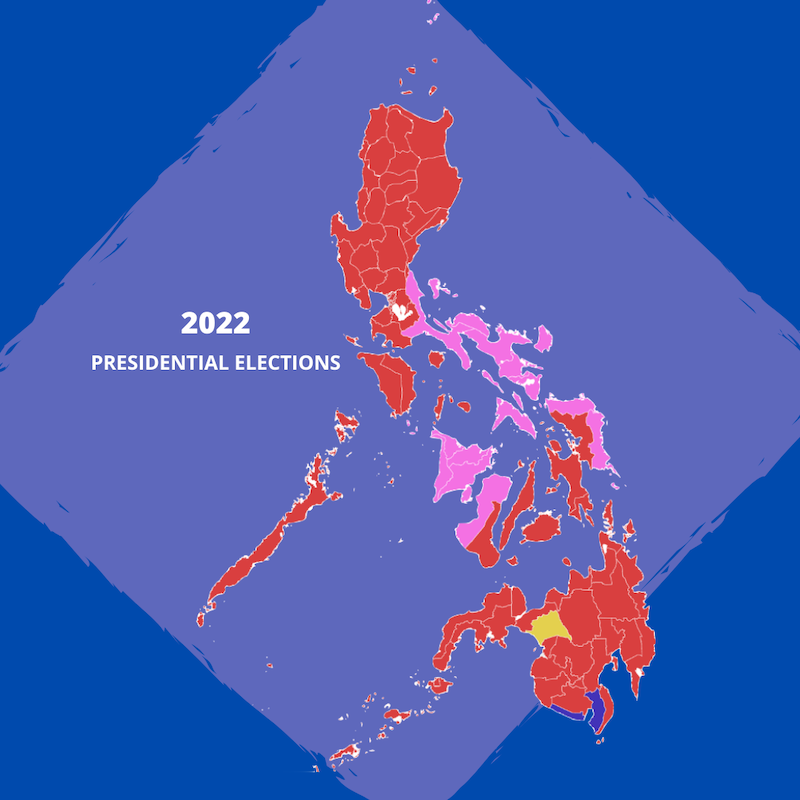 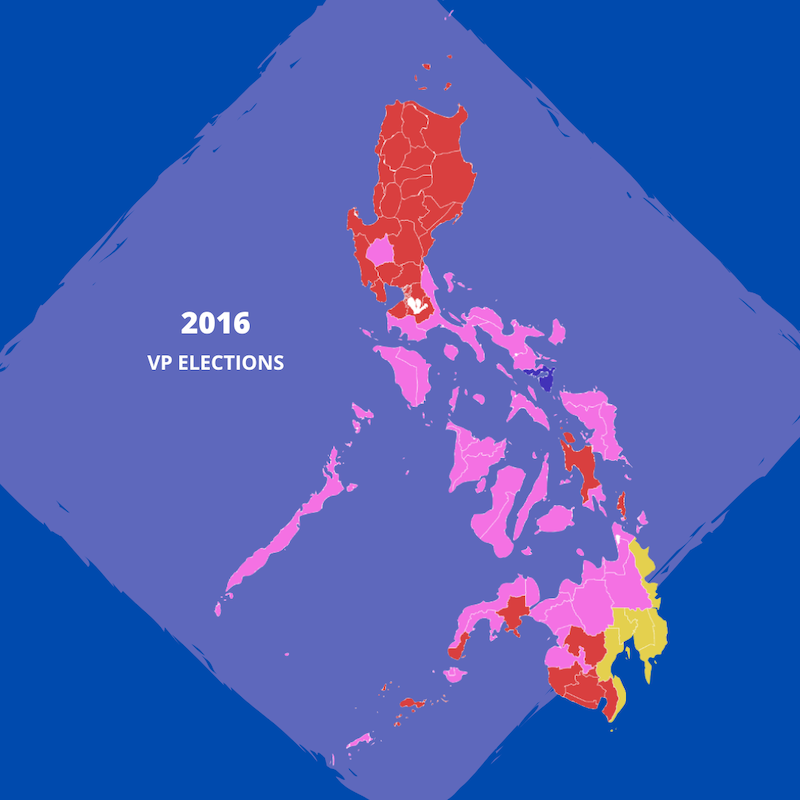 From Robredo to Marcos

Marcos also increased his votes in these provinces.

In Mimaropa provinces, Marcos more than doubled his votes in all the provinces while Robredo recorded modest increases except in Palawan, where her votes went down.

Cebu, the country’s most vote-rich province located in Central Visayas, delivered over 1.5 million votes for Marcos. It was a 769% increase from his votes in 2016 — over 650,000 — when he placed third following Robredo and Cayetano.

In Misamis Occidental and Misamis Oriental — also located in Northern Mindanao — Marcos increased his votes more than six times. Robredo’s votes in the two provinces were down to 23% and 62% of her 2016 numbers, respectively.

In BARMM, his votes tripled in Maguindanao and quadrupled in Basilan and Tawi-Tawi.

Just like in 2016, the National Capital Region was a Marcos country despite the behemoth crowds organized by Robredo during the campaign. Even in Manila City, the home turf of fellow presidential candidate Mayor Francisco “Isko Moreno” Domagoso, Marcos was the top pick with his over 350,000 votes. Moreno and Robredo placed second and third, respectively, with over 295,000 and over 195,000 votes.