IT HAS been branded to be the true, the good, if not so beautiful, official report on the war on drugs of the Duterte administration over the last 11 months. Launched last May 2, #RealNumbersPH is now the government’s unitary report on the virulent drug war of the Inter-Agency Committee on Illegal Drugs or ICAD, which was created only last March as a task force with representatives from 20 law-enforcement and other state agencies. IT HAS been branded to be the true, the good, if not so beautiful, official report on the war on drugs of the Duterte administration over the last 11 months.

Launched last May 2, #RealNumbersPH is now the government’s unitary report on the virulent drug war of the Inter-Agency Committee on Illegal Drugs or ICAD, which was created only last March as a task force with representatives from 20 law-enforcement and other state agencies.

Every Friday since, the Philippine National Police (PNP), the Philippine Drug Enforcement Agency (PDEA), and other ICAD agencies have been obliged to submit updated reports to the Presidential Communications Operations Office (PCOO) and the Office of the President (OP). These are then consolidated into #RealNumbersPH, which in turn is transformed into social cards that run weekly on Mondays in the government-run Philippine News Agency, and on the social media pages of the PCOO and ICAD agencies.

By all indications, from a largely police operation in its first 10 months, the war on drugs has turned also into a PR and publicity operation for the Duterte administration.

Last month, in fact, representatives of the ICAD agencies were called to a communication-planning workshop organized by the OP and PCOO.

But PCIJ’s review of the data enrolled in #RealNumbersPH against official source documents of the PNP, PDEA, Dangerous Drugs Board (DDB), and Department of Health, among other ICAD agencies, unmasks #RealNumbersPH to be real, correct, and true only mostly by name.

In particular, the first, fourth and fifth editions of #RealNumbersPH are writ in riddles and feature flawed and inflated numbers that are wildly different from what the primary drug-war data source, the PNP, had reported on the same dates or for the same covered periods.

Too, some of the numbers enrolled in #RealNumbersPH paint a picture so incredibly bloody, or simply incredible. 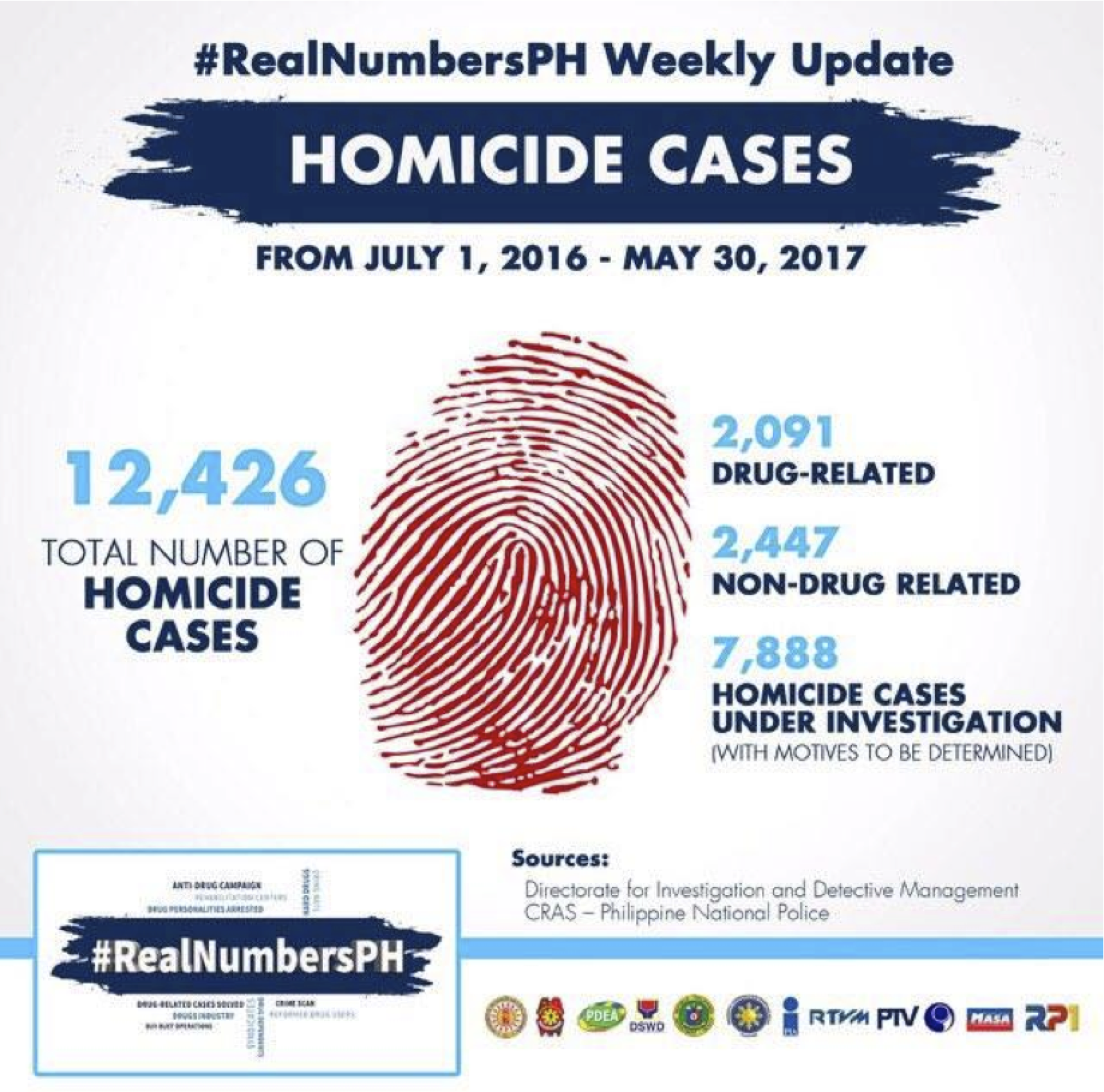 Yet, of course, #RealNumbersPH’s number for homicide cases crossed the second half of 2016 (July to December) and the first five months of 2017 (January to May). 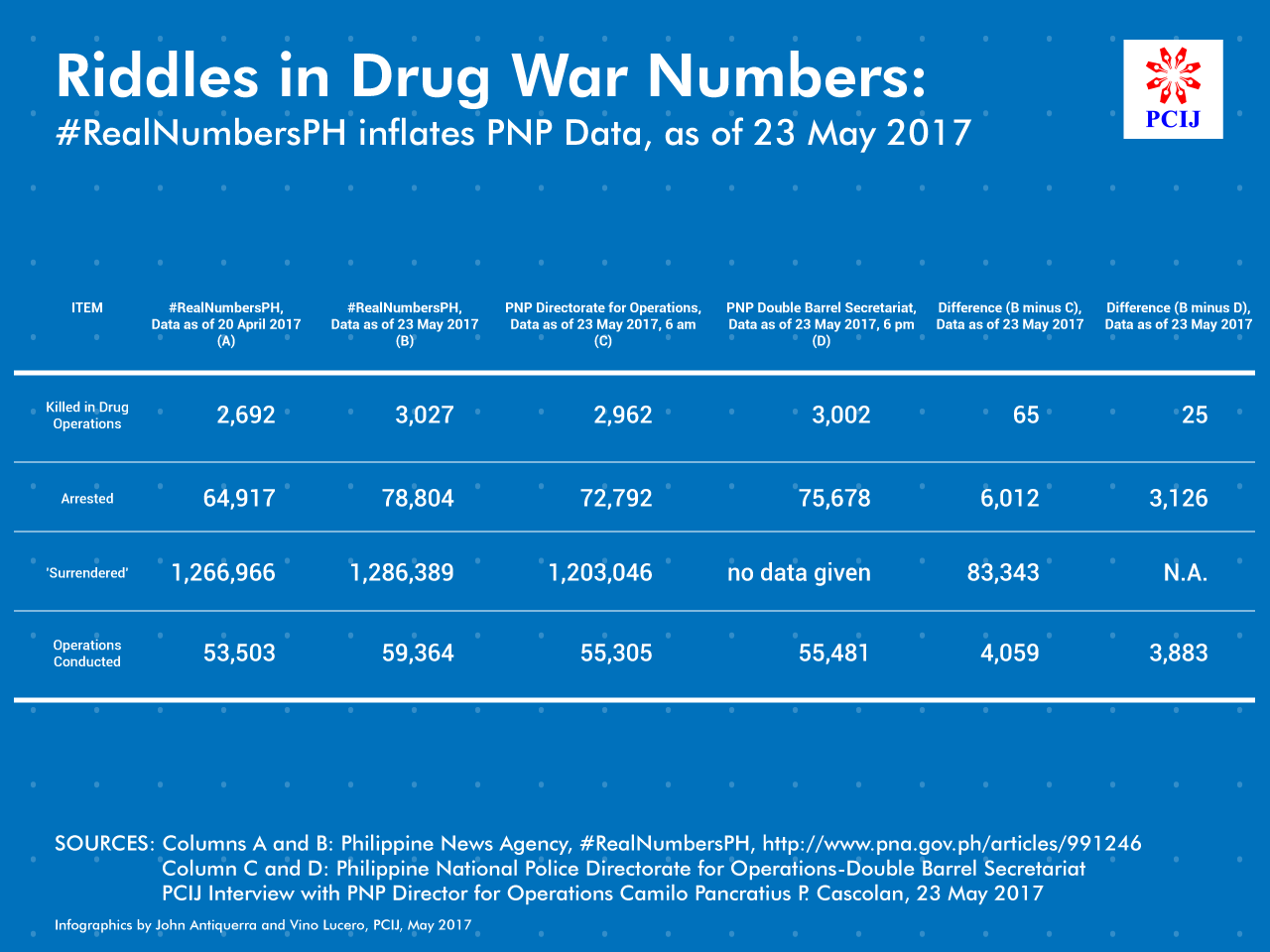 Even the PNP’s numbers on homicide and murder cases under investigation is slightly smaller than that of #RealNumbersPH, for the period from July 1, 2016 to May 26, 2017.

More inexact numbers spill out of #RealNumbersPH’s reports, however.

For instance, in its fourth report discussed in a PNA story dated May 26, #RealNumbersPH had figures that were wildly different from what the primary drug-war data source, the PNP, had reported on the same date, or for the same covered period. According to #RealNumbersPH, from July 2016 to May 23, 2017

• 3,027 had been killed in drug operations. That would be 25 to 65 more persons killed compared with data as of the same date, May 23, 2017, from the PNP Directorate for Operations and PNP Double Barrel Secretariat;

On the bigger number of operations launched that #RealNumbersPH reported, it must be noted that apart from PNP units, the PDEA, the National Bureau of Investigation and a composite Armed Forces unit have also been authorized to conduct anti-illegal drug operations. 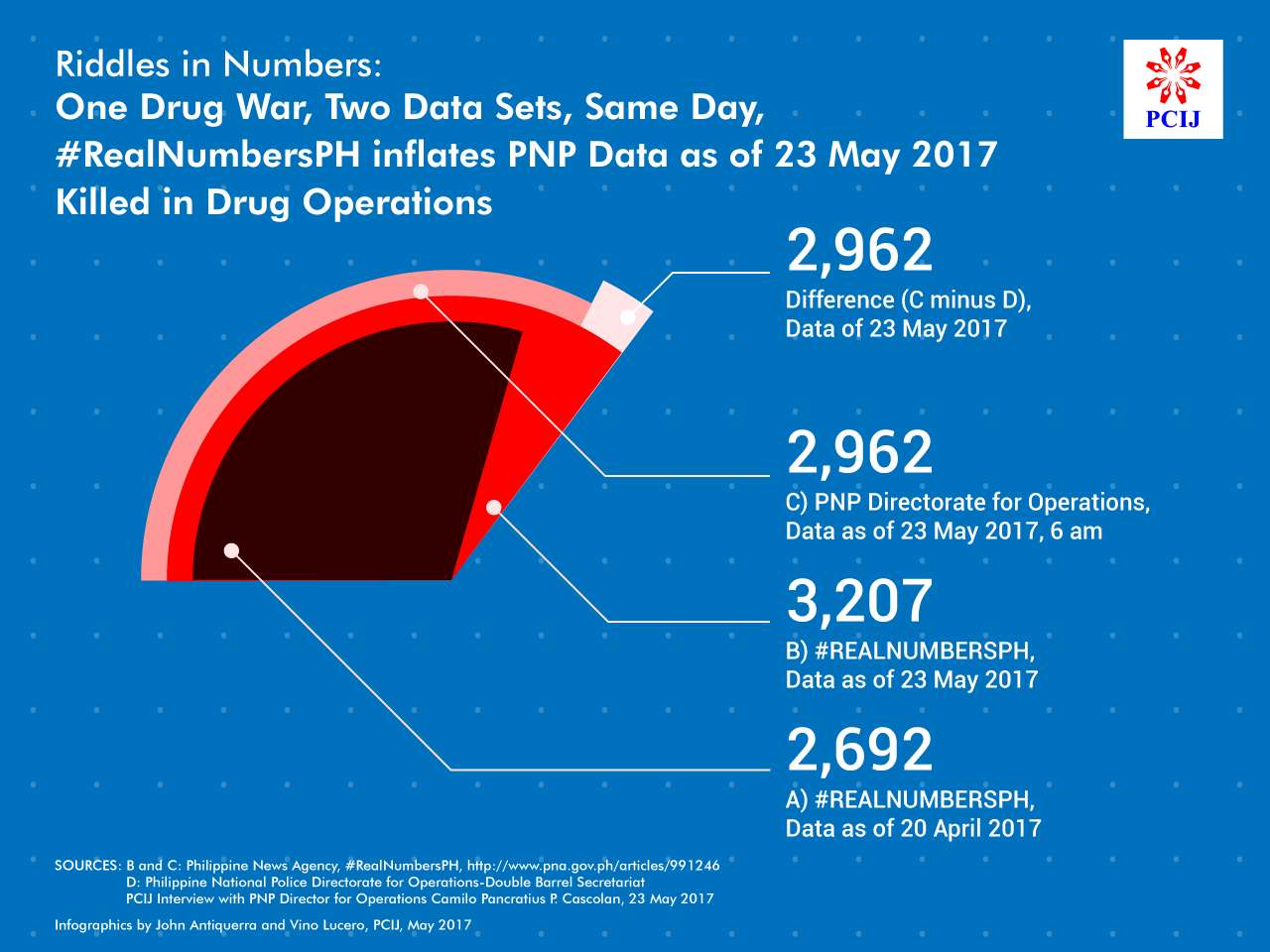 As of May 9, 2017, here is another report from the PNP that PCIJ obtained:

Meanwhile, in its fifth report released this Sunday, June 4, #RealNumbersPH did not have a total tally of “PNP personnel allegedly positive for use of illegal drugs” from July 1, 2016 to May 30, 2017. Instead, it merely said that according to the PNP Internal Affairs Service (IAS), only 207 cases of PNP personnel allegedly positive for illegal-drug use had been investigated.

Its social card also showed that 158 cases had been “resolved” (and those involved “recommended dismissed from service), and also that 158 PNP personnel had been dismissed. It is unclear, though, whether or not the 158 involved in the “resolved” cases and those dismissed were the same individuals. But the picture gets even murkier despite #RealNumbersPH’s social-card graphics. Even though it already said that more than 100 PNP personnel had been allegedly involved in drugs, #RealNumbersPH reported that of the 280 “government workers arrested in anti-illegal drug operations” during the same period, only 23 were “uniformed personnel.” 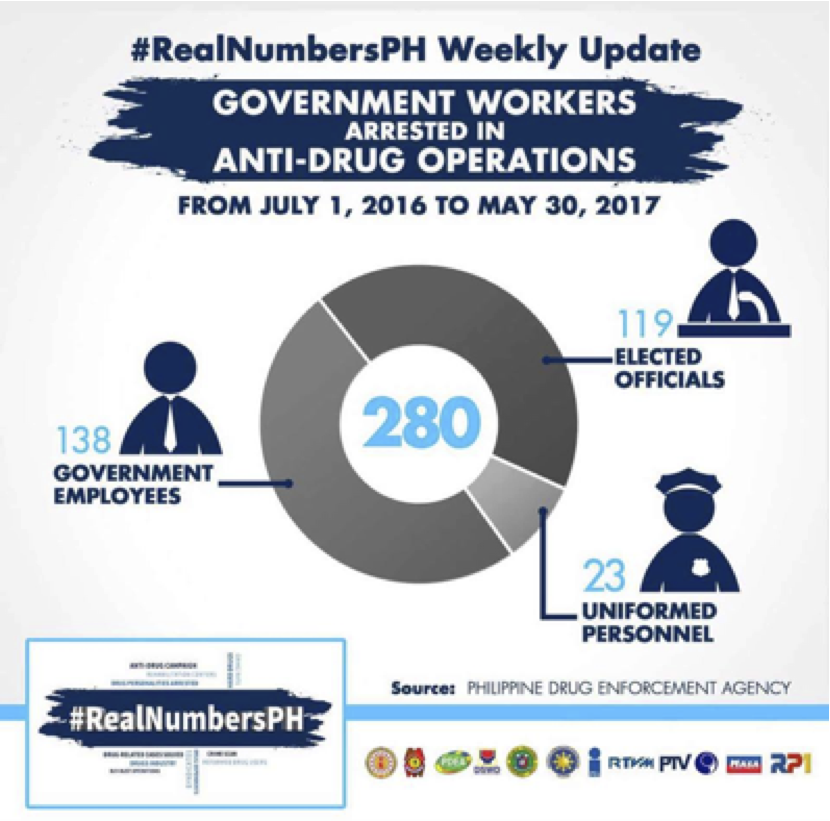 These numbers are also mere fractions of the data obtained by PCIJ from official PNP sources:

• Asked for data on the status of the PNP’s “internal cleansing” drive that forms part of Project Double Barrel, the PNP-IAS sent PCIJ reports on the “Status of Administrative Cases” and “Recommended Penalty of Resolved Administrative Cases.” These reports showed that from July 2016 to April 2017, a total of 203 PNP personnel had been dismissed from the service, 131 suspended, 49 demoted, nine issued reprimand, 159 exonerated, and 384 cases dismissed.

• As of May 26, 2017, a total of 166 PNP personnel on the numbers of “PNP personnel involved in illegal drugs” in 2016 had been dismissed from the service, according to the PNP Directorate for Operations. They include 158 PNP personnel from regional offices and national support units, and only eight from national headquarters. Of the 166, the big clusters have ranks of PO1 (67 personnel), P03 (45), P02 (30), and SP01 (12). In addition, there are also one police superintendent, two chief inspectors, one senior inspector, two inspectors, two SPO3, one SPO2, and three non-uniformed personnel.

The 166 total PNP personnel “found to be involved in illegal drugs,” according to the PNP’s Directorate for Operations is easily seven times more than #RealNumbersPH’s count of 23 PNP personnel arrested in drug operations.

The difference is significant: 166 minus 23 is 143 PNP personnel involved in illegal drugs who somehow went missing in the #RealNumbersPH count. One explanation could be that #RealNumbersPH may have wanted to report a deflated tally. It is also possible that the PNP knows that many more of its personnel are involved in illegal drugs but had yet to arrest them as of May 26, 2017.

What seems apparent in #RealNumbersPH’s first to the fifth reports between May 2 and May 30, 2017, however, is a deceleration of the growth rate of the numbers of those arrested, killed, or had surrendered, as well as the number of PNP’s drug operations.

Interestingly, what has suddenly disappeared in the government’s latest series of reports on the drug war is the number of houses visited under Oplan Tokhang. Logged at 7,760,795 as of May 9, this dipped to 7,189,306 as of May 23, in reports of the PNP Double Barrel Secretariat and PNP Directorate for Operations. But since its birth last May 2, #RealNumbersPH has not made any references to houses visited, a number that still appears in the respective reports of these two PNP offices.

Here are other time-series numbers, and their unusual slipping and sliding values, from #RealNumbersPH:

PCIJ Note: In its first to fourth reports, as of May 23, 2017, #RealNumbersPH reported an increase of 13,887 persons arrested, or 3,471 on average weekly. In the fifth report, it showed an increase of only 1,611 alleged drug users arrested in a week’s time.

PCIJ Note: A document that PDEA furnished PCIJ showed that as of May 15, 2017, the total number of surrenderees was also 1,266,966, or the same number enrolled in #RealNumbersPH data in its first and second reports.

PNP reports obtained by PCIJ also showed the numbers flipping back to ground level amid the relaunch last March of the drug war into Project Double Barrel Reloaded.

PCIJ Note: Summary data that PDEA gave PCIJ showed that a total of 57,892 operations against illegal drugs had been conducted as of May 15. In its first to fourth reports, #RealNumbersPH showed an increase of 5,861 police operations conducted in the four weeks from April 20 to May 23, or an average of 1,465 new operations per week. By its fifth release of data, #RealNumbersPH said there had been only 1,031 new operations since it issued its fourth report a week prior.

PRESIDENT RODRIGO R. Duterte has repeatedly said that drugs are the root of society’s many ills. He also seems to see drugs everywhere and in almost anything, even in the ongoing conflict in Marawi. Yet even as his administration’s controversial war against illegal drugs continues to claim lives, it has also spawned a side battle over numbers and public-relation points.

IT HAS been branded to be the true, the good, if not so beautiful, official report on the war on drugs of the Duterte administration over the last 11 months. Launched last May 2, #RealNumbersPH is now the government’s unitary report on the virulent drug war of the Inter-Agency Committee on Illegal Drugs or ICAD, which was created only last March as a task force with representatives from 20 law-enforcement and other state agencies.

Decoding Duterte's drug war:
What the terms mean in law

THE LAWS and official documents abound with terms and concepts that are sometimes easy and clear, but often vague and difficult, to fathom. But it is by their letter and intent that the virulent war on drugs of the Duterte administration must be implemented by the authorities, and must be understood by the citizens.

Stats on the state of the regions:
Hubs of wealth, ponds of poverty

Stats on the state of the regions:
A tricky tug of war for IRA, revenues