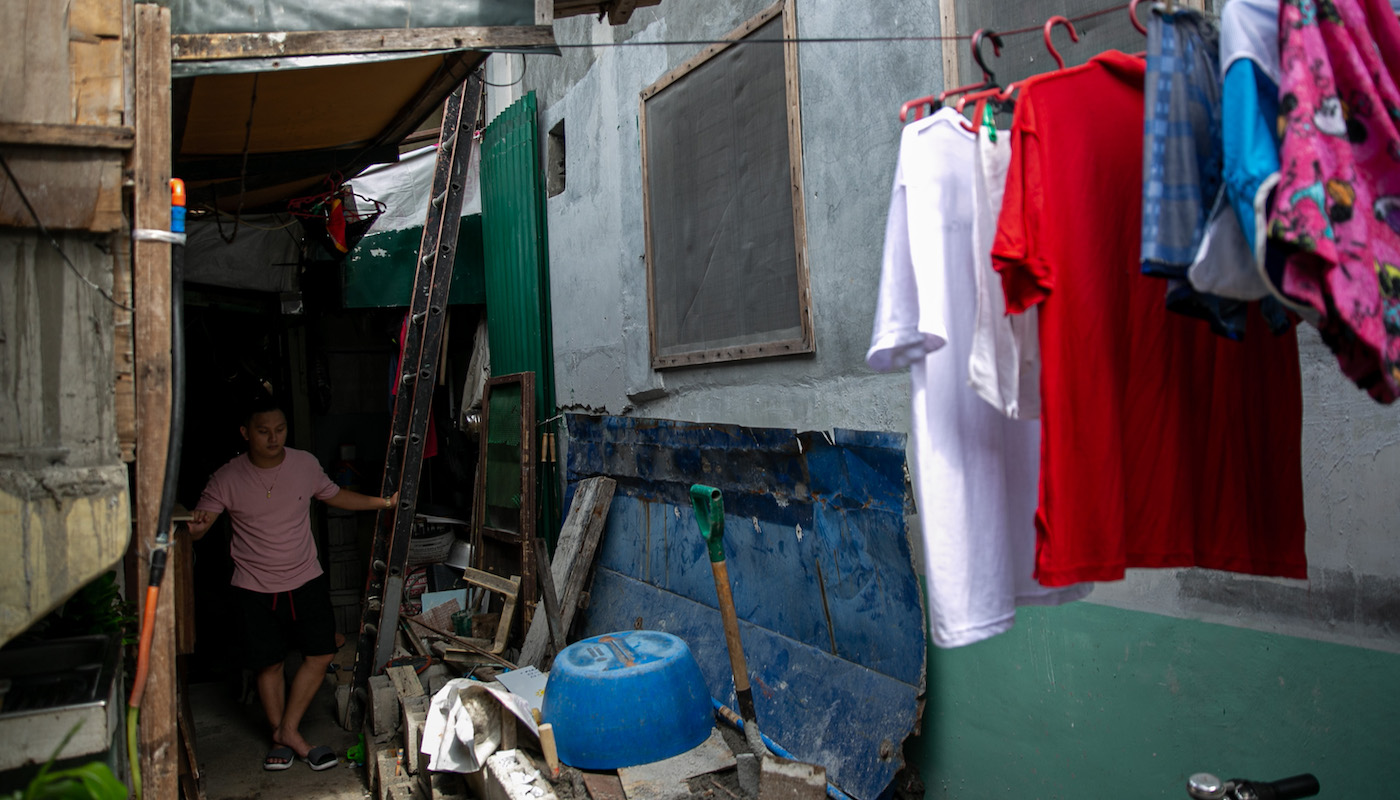 During the pandemic, some of  the minors in Bahay Pag-Asa Malabon charged with drug offenses were only violating lockdown protocols like curfews, said Rosemarie Ramos, who runs the facility.

George* still gets chills every time he remembers the moment of his arrest.

He was 17, at home in Malabon City one evening in October 2017, when policemen came to his neighborhood, supposedly to arrest a drug pusher living nearby. Curious, George and three of his friends joined a crowd gathering in front of the alleged drug pusher’s house.

As they stood  in the crowd, several Malabon policemen approached the four teenagers. Without warning, the cops handcuffed George and his friends, and brought them to the barangay hall.

Four and a half years have passed, but his random arrest remains clearly imprinted in George’s memory. “They were supposed to arrest someone from that street, but he managed to escape. They saw us standing there. We were there just to watch and gossip [with our neighbors]," he said.

George said the authorities showed them a ziplock bag full of marijuana, which cops insisted was found in their possession.

He ended up staying for almost two months in Malabon’s Bahay Pag-Asa, a facility for children in conflict with the law (CICL). A court eventually dismissed the case against George, but he had already been scarred by the experience.

George was one of thousands of minors arrested in the course of President Rodrigo Duterte’s war against illegal drugs.

From July 2016 to February 28, 2022, the Philippine Drug Enforcement Agency (PDEA) said it “rescued” 4,230 minors aged four to 17 in various anti-drug operations. Many of these children ended up in facilities like Bahay Pag-Asa or, worse, in regular jails.

During the pandemic, some of  the minors in Bahay Pag-Asa Malabon charged with drug offenses  were actually only violating lockdown protocols like curfews, said Rosemarie Ramos, who runs the facility.

Some minors like George may have been “planted” with evidence like illegal drug paraphernalia to justify their arrest—a practice still prevalent in many police arrests, said Raymund Narag, a former detainee in a Philippine jail and now a professor in Southern Illinois University studying the country's criminal justice system.

Narag, who interviewed numerous teen suspects for his study, said cops often are tempted to “get creative” in producing evidence  with respect to minors they suspect are involved in the illegal drugs trade.

“I noticed that on the day  [the minors] were arrested, most of them did not have drugs in their possession. Maybe they did not use drugs, but if you ask if they have ever tried drugs, based on our data, about 80 percent have [used in the past],” Narag said.

Narag, who worked with members of the Philippine National Police (PNP) to study the phenomenon, said  cops investigate first if their target suspect had used drugs in the past.

“Usually, they confirm first if this person used drugs. The problem happens when [the cops] arrest [the suspect who was able to] hide the drugs. That’s when it becomes hard to prove in court, because there were no drugs on the person’s body,” Narag said.

He also said it is in situations like this that the cops sometimes resort to “patong” or planting drugs from what they call “pondo” or funds.

Narag said  many police officers who “plant drugs” on suspects do so out of genuine desire to contribute to the anti-illegal drugs campaign. “These police officers may have pure intentions. They want to remove the drug problem because they have seen the negative consequences of drugs,” he said.

The PNP’s Drug Enforcement Unit, however, denied that the practice of “patong” exists. Police Col. Cherry Lou Donato, the unit’s public information officer, said they have had “no experience” of cops planting illegal drug evidence on a child.

“With how strict things are now, it’s unlikely that a police officer will do something against the law, especially when a child is involved,” she added.

“These [policies] would prevent abuse, discrimination, or violation of the rights of children who are in police custody. We will disseminate this to the entire police force to remind them how they should treat children they arrest,” Tomboc added.

She said  if a child is treated unfairly by a cop, the child’s family can file a complaint against the alleged abusers. But the absence of a formal complaint means perpetrators will get away with the unfair treatment.

“We have to follow due process. Although the police were involved, they still have rights, they have due process. There really should be a complaint [filed]...then automatically the PNP will initiate an investigation,” Tomboc said.

Despite the denial, reports of cops planting evidence to justify arrests or even killings persist. In fact, one of the charges against President Rodrigo Duterte being investigated by the International Criminal Court (ICC) was that PNP personnel “routinely” planted evidence like weapons or drugs on suspects’ dead bodies in order to incriminate them.

As of this writing, the ICC investigation is on pause after the Duterte administration requested  a deferral.

In a way, George was still lucky to have survived. Many minors targeted in police actions in the context of President Duterte’s war on drugs did not live to tell their story.

A study by the World Organization Againt Torture and the Children’s Legal Rights and Development Center (CLRDC) found that from July 2016 to December 2019, 122 children from the ages 1 to 17 died due to Duterte’s drug war. Some were  “collateral damage,” while others died in cases of mistaken identity.

Others were direct targets, like the case of Kian delos Santos, 17, who was killed by three Caloocan City policemen in 2017 after they accused him of being a drug courier. The cops dragged Delos Santos  from his home through a dark alley  and was mauled before he was shot.

Kian’s killing was captured on video, and one witness said he begged for his life before he was killed by the cops. His death sparked widespread criticism of the drug war, despite the conviction of his killers.

She said George was cooperative during his stay at Bahay Pag-Asa that he was released on recognizance within two months. Furthermore, his family  had the means to ensure his safety and education. Later, the court acquitted George  of the charge of drug possession.

Still, the drug war  left a lasting emotional impact on him.

A report by the Human Rights Watch in 2020 found that children of dead drug suspects were ostracized and bullied by their peers and their communities. Others had to flee their homes because they feared for their lives, while some children have stopped going to school because they fell into poverty when their parents were killed.

Some of the children were forced to work, with some ending up homeless, making them even more vulnerable to violence.

Now 21, George  is lucky to have been able to move on with his life. He now works as a repairman for a government office.  But trauma still lingers  every time he recalls his arrest.  It was all so random, unexpected, and frightening.

*George asked that his real name be withheld for security reasons.