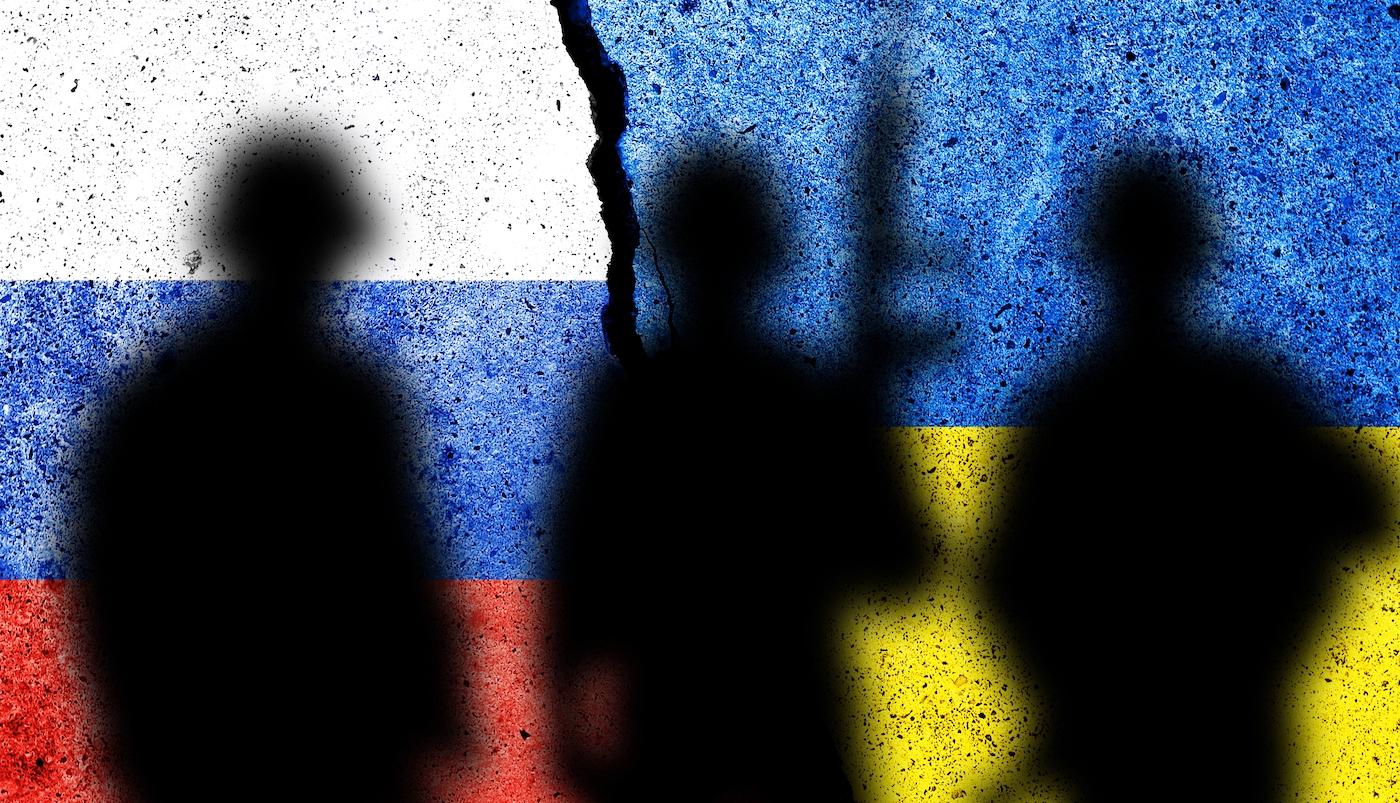 One viral TikTok video played over 3.6 million times in just two days depicts Russian President Vladimir Putin as a “true friend” of the Philippines, using clips from a 2017 GMA news report of Duterte’s visit to Moscow.

Some of these posts also circulate misinformation and callously ignore the plight of the real victims of war and conflict.

Tweets such as this wrongly associate the phrase “strongman” with positive values of firmness or bravery. In truth, the term “strongman politics” refers to autocratic leadership styles that use force and impinge on freedoms to cover up for a lack of rigorous policy.

One tweet of this cover, captioned with a flexed bicep emoji, came from a Twitter user self-identifying as “Bisaya/Maranao promoting BBMSara2022.” It has gained over 500 likes and 150 shares on Twitter since Feb. 25. 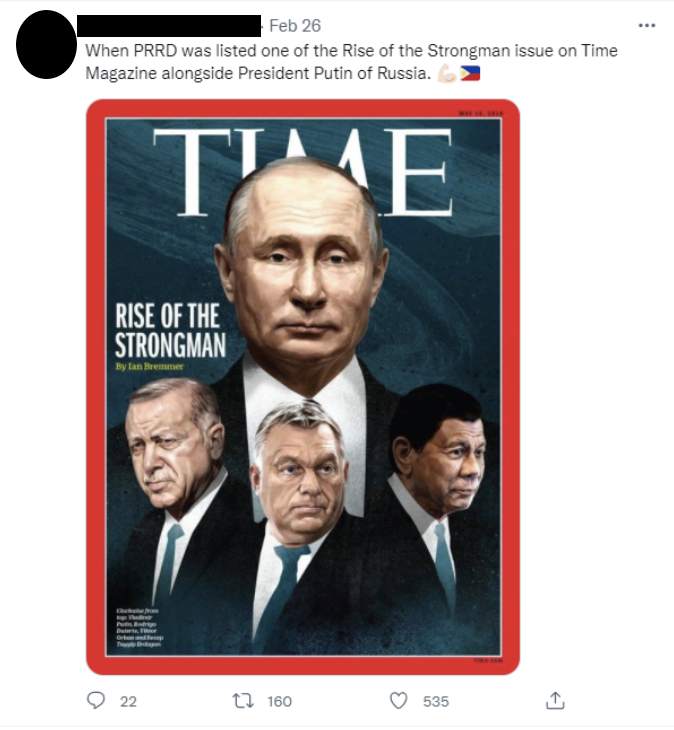 According to analysts, Putin had served as an “irresistible role model for Southeast Asia’s would-be despots,” as he innovated the playbook for leaders like Duterte to resist Western pressure and crush domestic dissenters and liberal reformers. Putin had also used economic agreements, military arms deals, and Covid-19 “vaccine diplomacy” to win over allies in the region.

In one viral TikTok video that has been played more than 3.6 million times in just two days, Putin is depicted as a “true friend” of the Philippines, using clips from a 2017 GMA news report of Duterte’s visit to Moscow. The pseudonymous TikTok user self-identifies as “Certified DDS” and captions this video, “Ukraine should learn from Duterte.”. 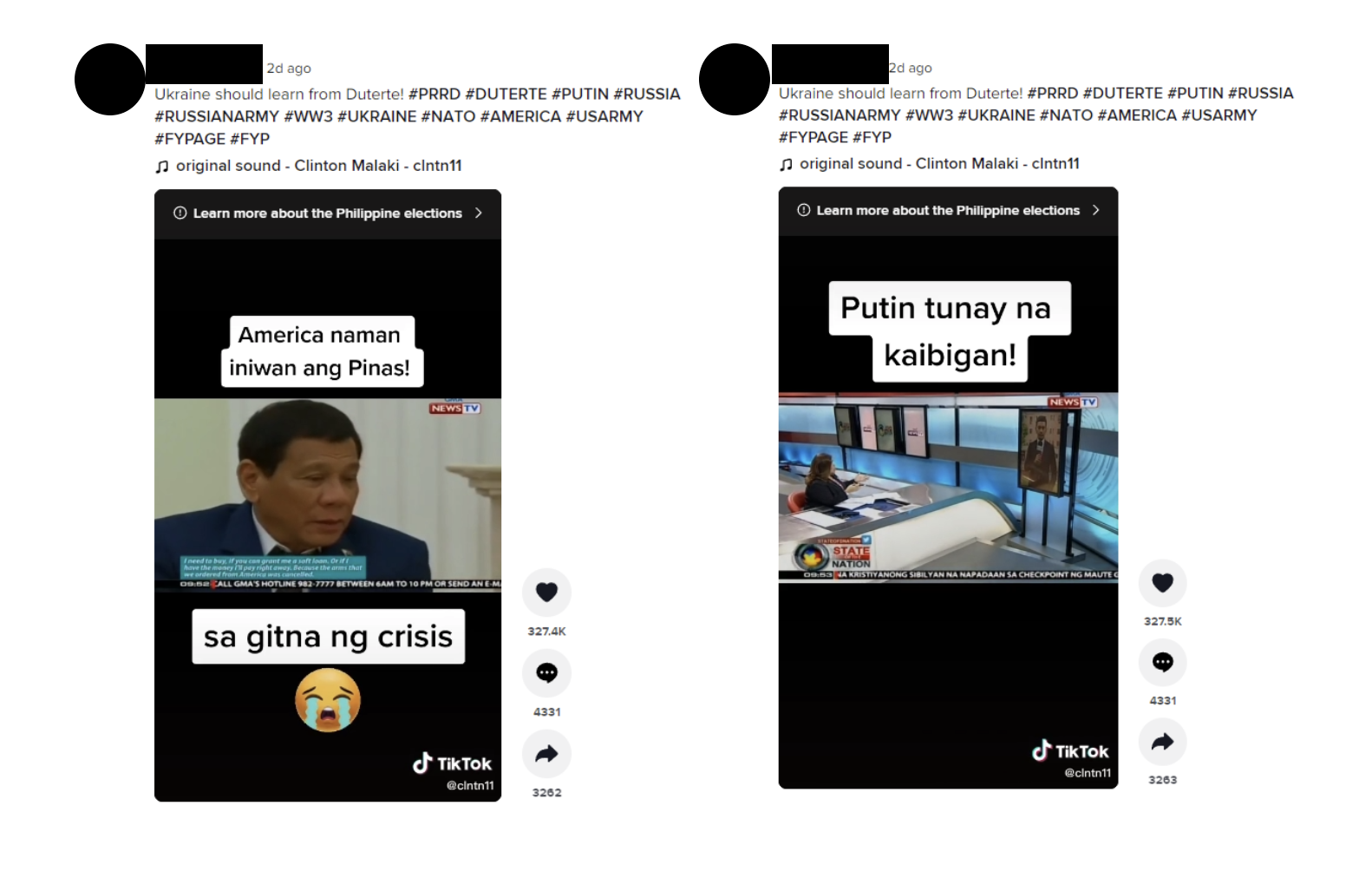 The second common expression of pro-Marcos and Duterte accounts involves mocking the United States, particularly their “weak-willed leaders” and mistreatment of international allies.

A Twitter user, who wears a Marcos/Duterte shirt in his profile picture, created a meme to mock President Joe Biden’s refusal to send soldiers to Ukraine, saying that US response to Russia would be limited to actions on social media platforms. 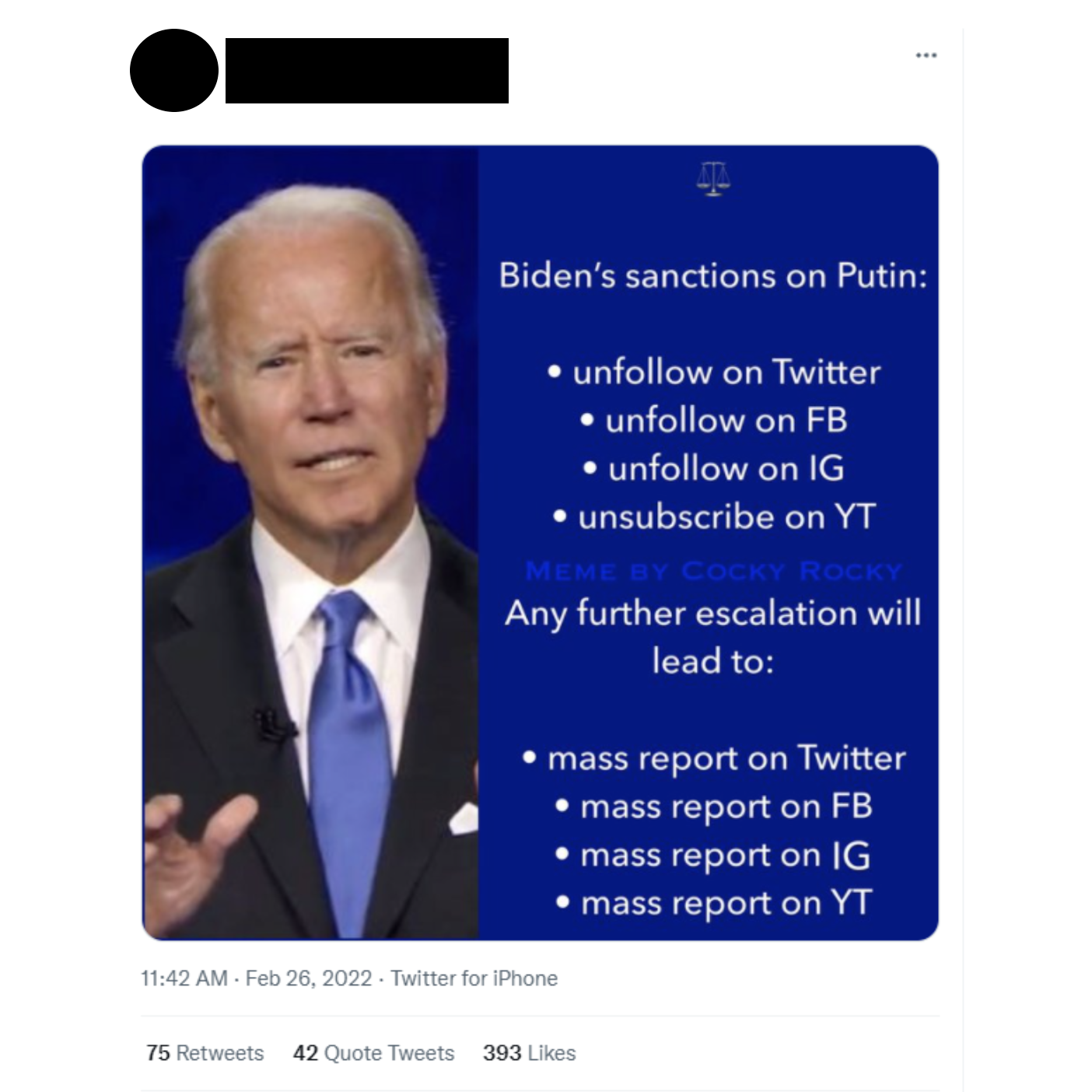 Similar to US far-right groups, Marcos and Duterte supporters have a long-held conspiracy theory that the big tech platforms’ content policy is biased and more likely to deplatform them. This is misleading, as studies in the US and the Philippines have shown that social media platforms have not done nearly enough to monitor misinformation, hate speech and harassment, and misleading historical revisionist narratives from right-wing politicians and their supporters.

A high-engagement video on TikTok also attacks the US for abandoning innocent civilians in the Ukraine while praising Duterte’s foresight to “cut ties” with the US. Viewed over 660,000 times, the TikTok is a montage of Duterte’s anti-US rhetoric from old speeches. This video is misleading. Despite Duterte’s statements praising Russia and criticizing the US, the Philippines still enjoys the status of being a “major non-NATO ally” of the United States. 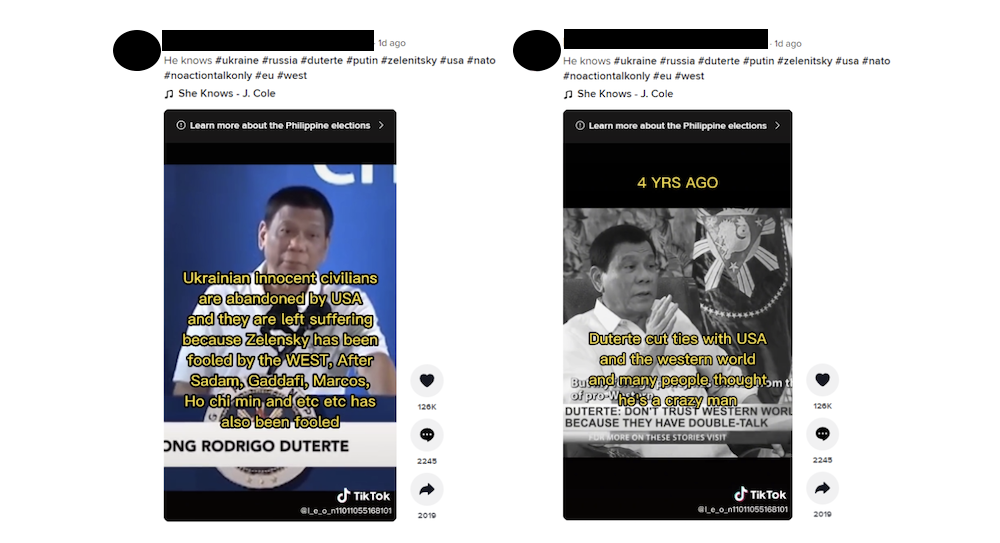 Conspiracies of Robredo as a US puppet

Pro-Marcos and Duterte accounts have seized the opportunity to attack Leni Robredo’s public support of Western foreign policy, even conspiratorially asserting that she is supported by the US government. Some of these posts mock Vice President Robredo as a “lapdog of the US.”

In one meme circulating on Twitter, Robredo is depicted as a puppet controlled by US government interests. This meme warns voters against electing a US puppet government that would supposedly create a situation of being “fooled” and “raped” like Ukraine.

Pro-Marcos and Duterte political pundits have amplified this smear against Robredo.

Some accounts have juxtaposed Robredo’s statements of solidarity for Ukraine, contrasting her acknowledgment of Ukraine’s “strong relationship with its allies” with the Ukrainian president Volodymyr Zelensky’s own quote, “We have been left alone to defend our state. Who is ready to fight alongside us? I don’t see anyone.”

Since 2016, the Duterte camp has sold its brand of leadership as tough and battle-hardened crisis managers and critiquing its rivals as soft, impractical, and “holier than thou.” In 2022, this positioning has proven to be misleading, as the Duterte administration has botched its management of Covid-19 with the Philippines ranked “the worst place to be during the pandemic”. Meanwhile, Robredo’s office has garnered multiple accolades for its innovative and resourceful COVID-19 programs.

Crucially, the conspiracy theory that Robredo is aligned with the US government has many pernicious consequences. The anonymous account of @KaploEl speculates how a Robredo presidential victory would lead to the country hosting new military bases and thus increasing the Philippines’s chances of becoming a “war venue.” The account also insinuates that US “elitists” and “globalists” are likely to intervene and alter the election results to ensure a Robredo victory. 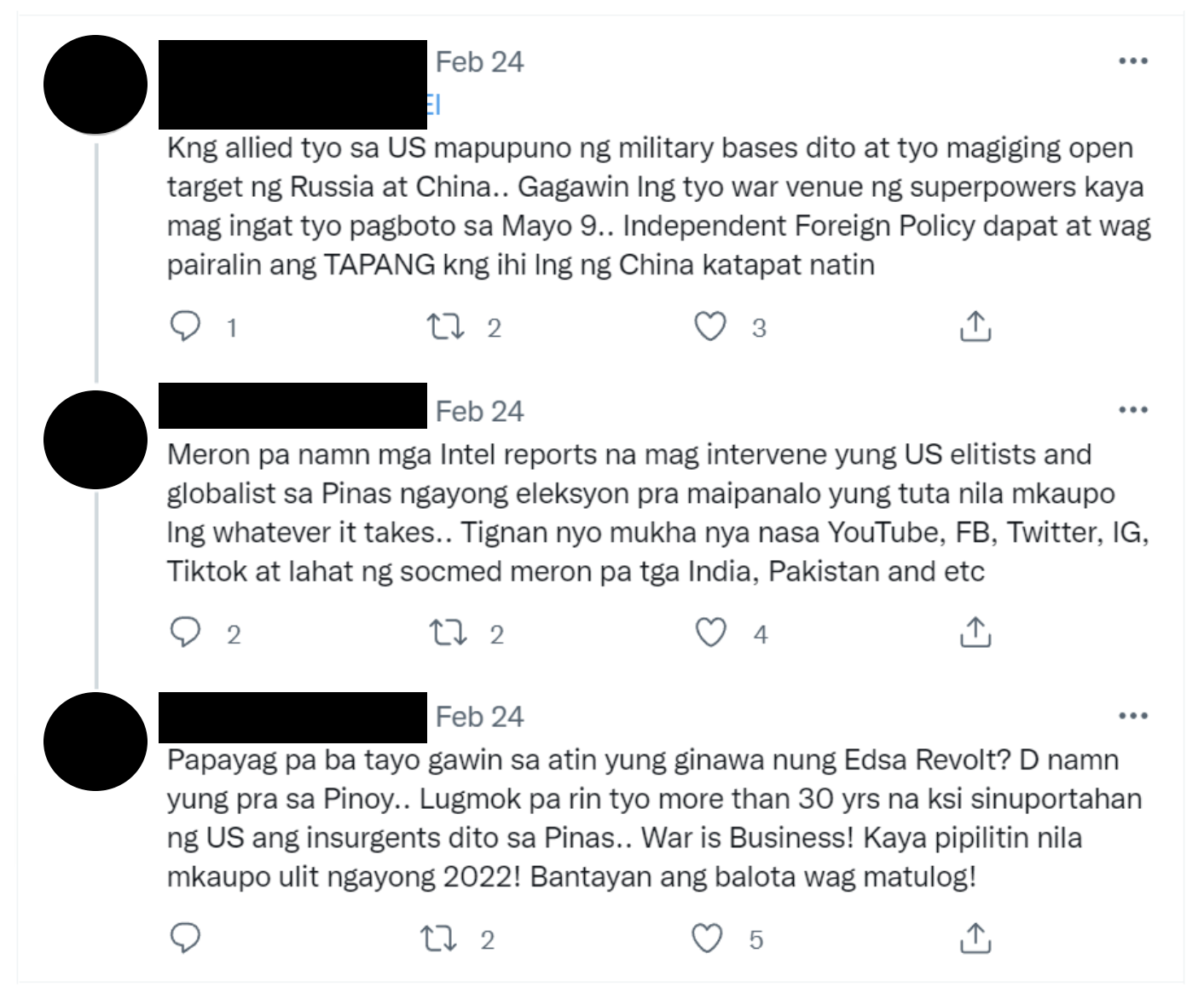 Conspiracy theories abound. A pro-Marcos and -Duterte account warns that US forces are out to manipulate the Philippines elections and increase the likelihood of the country becoming a “war venue” that will only serve US interests.

In truth, Robredo’s official position in the war involves prioritizing the safety of overseas Filipino workers, leveraging international alliances, and preparing for local industries to weather any economic effects of a global conflict.

Some supporters of Duterte and Marcos on Twitter argue that an allegedly “independent” foreign policy under a Marcos presidency would advocate for peace among nations while a Robredo presidency would inevitably lead to war with China.

On TikTok, a viral video posted by a pro-Marcos supporter spliced a clip from the presidential candidate’s DZRH interview and inserted pro-Duterte blogger Sass Sasot’s commentary to suggest that Robredo has a pro-war stance. In reality, Robredo explicitly mentioned during the interview that she was against war and instead advocated for the modernization of the armed forces and the strengthening of relations with allied nations to defend the country.

What’s obvious is that much online discourse about the Ukraine-Russia conflict has perpetuated misinformation and conspiracy theory in Duterte/Marcos supporters’ efforts to use this international crisis as a weapon to fight domestic electoral battles and dunk on political opponents.

What’s missing is any sense of compassion or solidarity for actual victims of war and conflict in Kyiv. Online discourse centers mostly on the benefits our country gains from voting certain candidates that could build international alliances to prevent war.

It’s important to share news that is vetted and fact-checked, including from independent media on the ground in Kyiv, rather than use an international crisis to score political points and gain clout on social media. END

Dr Jonathan Corpus Ong is Research Fellow at the Harvard Kennedy School and Associate Professor at UMass Amherst. He is the co-author of the study “Architects of Networked Disinformation: Behind the Scenes of Troll Accounts and Fake News Production in the Philippines” His Twitter is @Jonathan_c_ong.