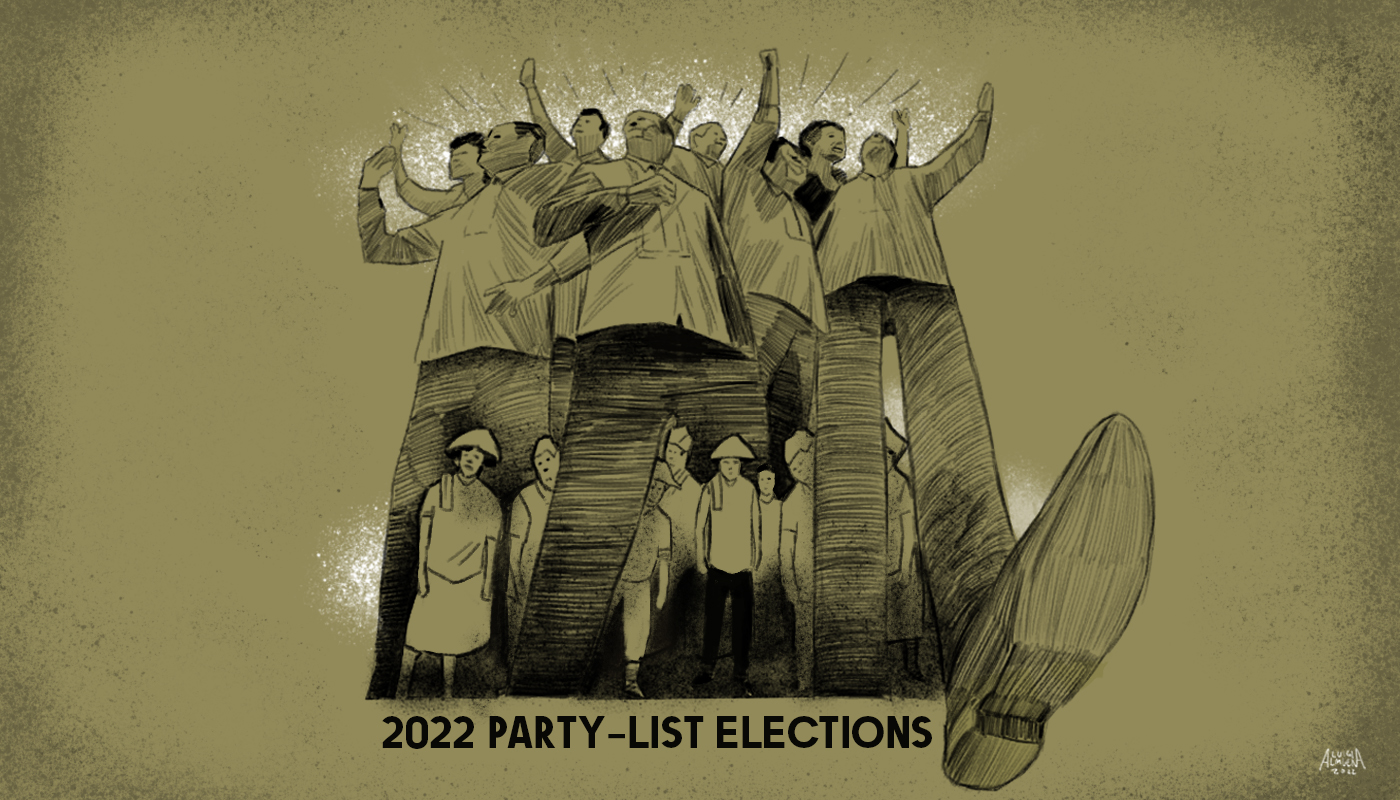 Politicians, their spouses, siblings and children pack the party-list race

The party-list elections have become a back door for politicians to perpetuate themselves in power, said Danilo Arao, a journalism professor and convenor of the election watchdog group Kontra Daya.

At least 70 of 177 party-list groups accredited by the Commission on Elections (Comelec) for the May 2022 elections have nominees who are connected to political clans or incumbent local or national elected officials, research by the Philippine Center for Investigative Journalism (PCIJ) showed.

Among them are a former senator and many district and party-list representatives, governors, vice governors, provincial board members, mayors, vice mayors, and councilors.

Spouses, siblings, and children of politicians are running, too.

Former senator Jose “Joey” Lina Jr., once the secretary of the Department of the Interior and Local Government, is seeking a political comeback via the party-list elections. He is the first nominee of Ang Komadrona, a group seeking to represent midwives.

The father of Sen. Joel Villanueva, evangelist Eduardo “Eddie” Villanueva, a deputy speaker in the House of Representatives, is seeking reelection as first nominee of Citizens’ Battle Against Corruption (Cibac). The senator and his brother in law Sherwin Tugna previously occupied the seat.

The wife of Senator Aquilino Pimentel III, Kathryna Yu-Pimentel, is the first nominee of PDP Cares Foundation Inc., a multisectoral group that enjoys ties with PDP-Laban, a political party founded by the senator’s late father.

The daughter of Senate President and vice-presidential candidate Vicente Sotto III, Lala Sotto, is the second nominee of AGAP or the Agricultural Sector Alliance of the Philippines.

“The Party-list System has not been truly faithful to its mandate,” said Danilo Arao, a journalism professor and convenor of the election watchdog group Kontra Daya.

“We've seen that the ones who mostly win in the party-list race would either be part of political dynasties or be run by big business. It has become a back door for politicians to increase their number of seats,” he said.

Aside from the political clans, many party-list groups have connections with the Duterte administration, as well as the military and police, PCIJ’s research also showed.

Party-list elections were first held in 1998, following the enactment of Republic Act 7941 or the Party-list System Act, in 1995. It was initially open only to “marginalized and underrepresented sectors” such as workers, farmers, urban poor, indigenous people, youth, women, and others.

A 2001 Supreme Court ruling affirmed this initial interpretation of the party-list system law, saying that only parties and their nominees “who belong to the marginalized and underrepresented sectors” were qualified to hold seats.

In 1998, during the first party-list elections, Akbayan got the most votes, securing one seat in Congress. Bayan Muna topped the next, in 2001 and 2004, securing the maximum three seats in those elections. Both Akbayan and Bayan Muna represented various marginalized sectors and were outsiders in the traditional political arena.

In 2007, the party-list group founded by El Shaddai evangelical leader Mike Velarde, Buhay, topped the race. In 2010, it was Ako Bicol, the group founded by the family of Bicol-based businessman Elizaldy Co.

The Supreme Court reversed itself in 2013, however, citing the intent of the framers of the 1987 Constitution. It said groups or political parties only needed to advocate for common beliefs or ideologies “regardless of their economic status as citizens.”

The ruling allowed the participation of national and regional representation as well as the sectoral arms of political parties. It became an opportunity for powerful political clans and vested interests in the national and local levels to use the party-list system to extend their clout.

“Even before the Supreme Court reversed its original decision in 2001, there were already attempts on the part of national political parties, organized groups, and projects that were funded by the government directly (such as the Mamamayan Ayaw sa Droga or MAD) to penetrate the party-list race,” said political science professor Carl Marc Ramota, former chairperson of the Department of Social Sciences of the University of the Philippines-Manila.

Ramota cited the Mamamayan Ayaw sa Droga or MAD, which got more than 1.5 million votes in the 2001 elections, placing second to Bayan Muna. MAD was disqualified by the Supreme Court after they won because the party-list group represented by popular actor Richard Gomez didn’t belong to a marginalized sector.

“What the April 2013 decision did was give a green light to everyone to participate in the party-list race. As a result, those with resources, well-oiled machinery, and traditional bailiwicks entered the fray. And we saw this in the 2013, 2016, and 2019 elections,” Ramota said.

Gomez, who is completing his second term as mayor of Ormoc City, is again running for a seat in the House of Representatives. He is seeking to replace his wife, Lucy Torres, who is on her third and last term as representative of the 4th district of Leyte and is also running for Gomez’s current position.

Switching from district to party-list elections

Many former district representatives, including those who had lost their reelection bids, have also joined the party-list elections.

Anthony Rolando Golez Jr., a former Bacolod City representative, is the first nominee of Malasakit at Bayanihan Foundation Inc. (Malasakit@Bayanihan). He was the deputy presidential spokesperson for President Arroyo from 2007 to 2009.

Malasakit@Bayanihan is closely tied to Sen. Christopher Lawrence “Bong” Go. Its third nominee, Sittie Fharmina Balt, is the chairperson of Friends of Bong Go (FOBG), while fifth nominee Kerwin Pagaran was the fourth nominee of Duterte Youth party-list group in 2019.

Former Oriental Mindoro representative Rolileo Ignacio, who served in Congress in the 80s, is the first nominee of Ang Senior Citizen.

The party-list elections have also allowed husbands and wives to both have seats in the House.

The first nominee of An Waray, Florencio Noel, is the husband of Malabon Rep. Josephine Noel. Noel served as representative of An Waray from 2004 to 2013 before his sister Victoria Noel took over for two terms, from 2013 to 2019.

The wife of Manila Rep. Benny Abante, Marie Paz, is the first nominee of Peace, a party-list group seeking to represent educators.

Former Isabela Rep. Napoleon Dy is the second nominee of ANAC-IP, a party list advocating for issues of indigenous peoples.

The wife of Batangas Gov. Hermilando Mandanas, Regina, is the second nominee of AnaKalusugan.

The Garin political clan of Iloilo is fielding a new family member as Sharon Garin is winding up her third and final term as representative of Ang Asosasyon Sang Mangunguma Nga Bisaya-Owa Manguguma Inc. (Aambis-OWA). In her place, the group’s first nominee is Lex Colada, a brother-in-law of Sharon who is married to Guimbal Mayor Jennifer Garin-Colada. Aambis-OWA registered as representative of Visayan farmers.

In Mindanao, the daughter of Sulu Gov. Abdusakur Tan is the first nominee of Kusug Tausug.

A number of civilian and military officials who worked under the Duterte administration are running in the party-list elections.

Among the most prominent is former Presidential Communications Operations Office assistant secretary and ardent Duterte supporter Esther Margaux “Mocha” Uson, who is the first nominee of Mother for Change (Mocha) party-list group. Uson’s mother, Estrellita Uson, is the fourth nominee.

Teo was forced to resign from the DoT in 2018 after it was revealed that she had favored her brothers' company in an advertising contract worth P60 million.

Lawyer Reynold Munsayac, another known Duterte supporter, is the first nominee of Act As One Philippines Party-list, which seeks to represent frontline health workers. In November 2021, he filed the certificate of candidacy of his San Beda Law School classmate and Davao City Mayor Sara Duterte-Carpio before the Comelec to substitute for erstwhile Lakas CMD vice-presidential candidate Lyle Uy.

Advocating for the security sector agenda

A number of party-list groups are fielding former high-ranking officials from the security sector, while some groups advocate for the military’s counterinsurgency program.

Nominees of the Public Safety Alliance for Transformation and Rule of Law, Inc. (Patrol) party-list group, meanwhile, are mostly officials and members of the Philippine National Police Academy Alumni Association.

Rebolusyonaryong Alyansang Makabansa (RAM) will field its own party-list group in this year’s elections. RAM, originally a group of disgruntled junior military officials that participated in the 1986 EDSA uprising, first ran in 2016, with the late Danilo Lim, a retired general, as its first nominee. Similarly, Magdalo Party-list is in the race, with former navy intelligence officer Manuel Cabochan as its first nominee and 2003 Oakwood mutineers Ian Luis Badecao and Audie Tocloy as its third and fourth nominees, respectively.

Abante Sambayanan’s first nominee is Jeffrey Celiz, NTF-Elcac’s star witness who linked Makabayan bloc legislators to the communist insurgency. Its second nominee Winefredo Dolbizo Jr. is also an NTF-Elcac witness against the Makabayan bloc during the Senate hearings on red-tagging. Third nominee Arthur Tariman is convenor of the military-sponsored Victims of Injustice, Criminality and Terrorism in Mindanao.

Ipeace Epanaw has Reuben Lingating as its first nominee. Lingating is former chair of the National Commission on Indigenous People (NCIP) and head of the indigenous peace panel in 2017, while second nominee Marlon Bosantog is former director for legal affairs of the NCIP and spokesperson of NTF-Elcac. Fourth nominee Ramcy Astroveza is a former NCIP commissioner.

Although both Arao and Ramota said the Party-List System Act has been “bastardized,” they both believed the system could still be reformed by Congress, the Supreme Court, or the Comelec.

“We do not believe the system should be abolished. No matter how bastardized the system may be, there are still certain limited opportunities provided to the marginalized, to have their voices heard in Congress through certain party-list groups that may, or that are likely not to be controlled by political dynasties,” Arao said.

Ramota said proposed bills in Congress could address the gaps and inconsistencies in the party-list system law. But it’s also important to have effective legislation against political dynasties as mandated by the 1987 Constitution, he added.

“It’s not beyond repair. I’d like to believe, [because] this is a legislation, that it can be remedied through reforms.”  END

The Makabayan bloc warns that the government’s campaign against dissent won’t stop at members of the progressive coalition.

When ads work and don’t

PR EXPERT Jonas Campos observes that one reason that political ads failed to work for some party-list groups is because they used the wrong “channel.” Campos is not trying to spark yet another network war. Rather, he is referring to party-list group ads that did not carry the organization’s message or advocacy and instead showed the faces of mainstream politicians or carried a major party’s slogan.