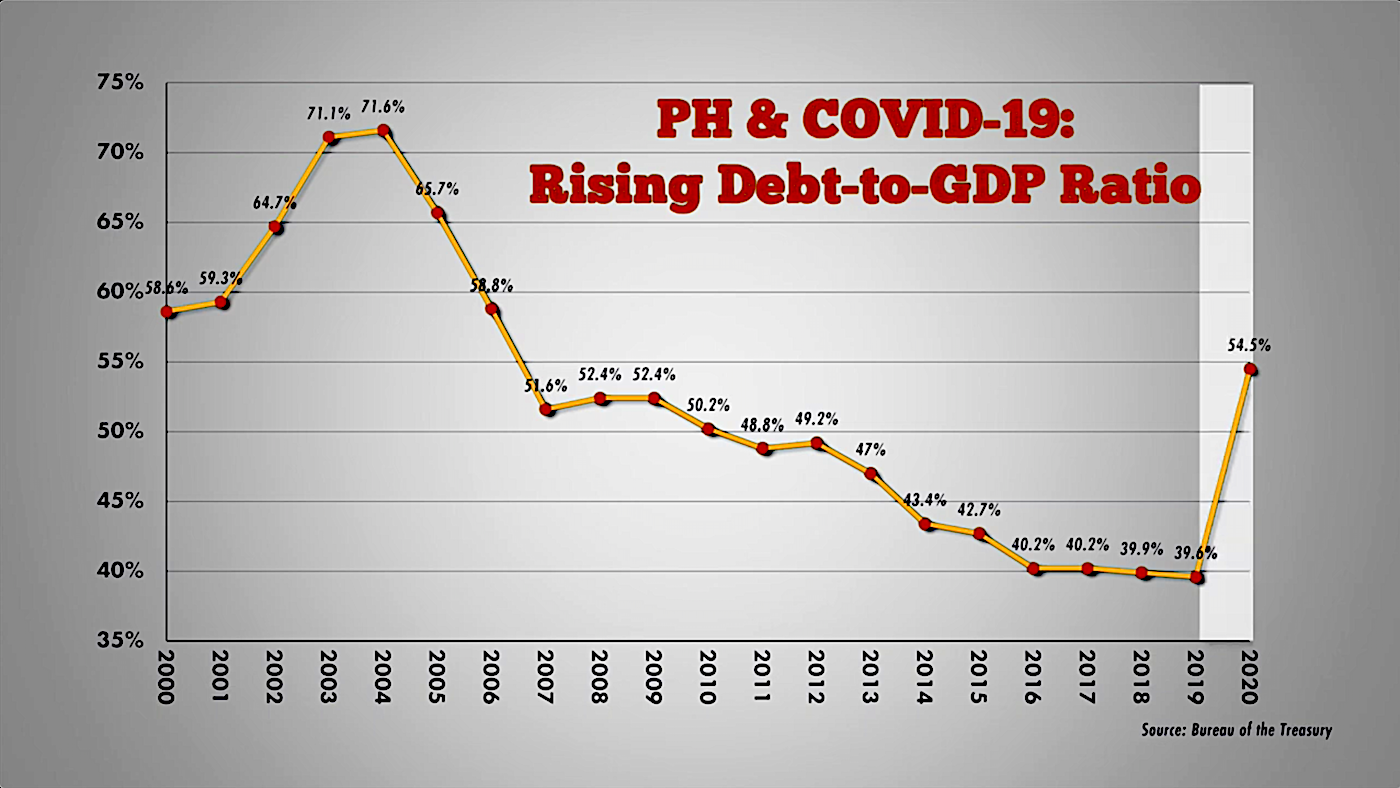 Should Filipinos worry about the national debt?

The government has no choice but to borrow money to finance its pandemic response. Experts say Filipinos shouldn’t worry too much over borrowings – what’s important is that money is spent to allow the country to recover quickly and repay the debt.

More and more Filipinos are growing concerned over the country’s national debt. And it’s hard to blame them.

After all, the debt figures regularly reported in the news are rather mind-boggling. Total outstanding debt stood at P11.17 trillion by the end of June 2021. That’s nearly 62% of the country’s total output in 2020 and about 2.5 times the government’s budget in 2021.

Large though our overall debt may seem, the government has little choice but to borrow to finance our pandemic response.

But how worrisome is the Philippine national debt? Not as much as most people think.

Contrary to popular belief, the public debt is not driven by foreign borrowings, but rather domestic debt, which takes up the bulk at 71% of the total.

Domestic debt comes chiefly from the issuance of securities (like Treasury bonds and bills), and lately short-term loans from the Bangko Sentral ng Pilipinas.

External debt constitutes the remaining 29% of total national debt. These are government borrowings in the form of loans from foreign institutions such as multilateral agencies (the World Bank, Asian Development Bank, etc.) as well as the issuance of securities abroad (panda bonds in China, samurai bonds in Japan, etc.).

Hence, while debt has been increasing as of late, external debt is still overshadowed by domestic debt. Filipinos are in fact the government’s biggest lenders.

The greater share of domestic borrowings, a relatively recent phenomenon, is more sustainable vis-à-vis foreign borrowings. As Filipino economist and Inquirer columnist Solita Monsod put it, “[In] domestic debt, you owe to your people, and when you pay to your people the money stays within the economy. When there’s external debt, you pay outside.”

Regardless of the source of national debt, many people feel a personal link to it, thinking they’ll have to shoulder part of the debt themselves in the future.

That’s true, but only to some extent. What’s crucial here is that while our debt is growing, so is our ability to repay it.

“It does not matter what the size of your debt is. It depends on your ability to pay. That is, will this country be able to recover enough and go back to its growth path? That is the more interesting one, and that will not happen unless we have better governance,” Monsod said in an interview.

This is why economists, rather than focus on raw amounts, tend to look instead at debt indicators like the debt-to-GDP ratio, or the amount of debt relative to the country’s income. In 2020, debt exceeded half of our GDP for the first time since 2013.

Josef Yap, former president of the Philippine Institute for Development Studies, put it this way: “This is like a household with an income of P50,000 but with a total debt of P25,000. Its debt is about half of its income.”

Because of the pandemic, the Philippines’s debt-to-GDP ratio has been climbing. But this is hardly a problem unique to us: neighboring Asean countries have incurred more loans to finance their pandemic responses, and therefore have even higher debt-to-GDP ratios.

In the middle of the pandemic, rising debt-to-GDP ratios are not so worrisome if they mean economies will be able to recover faster. “As long as interest rates remain very low, as we’re seeing, and we get the recovery that we're projecting, then the combination should help in bringing down debt levels slowly over time,” said Gita Gopinath, chief economist of the International Monetary Fund, last year. 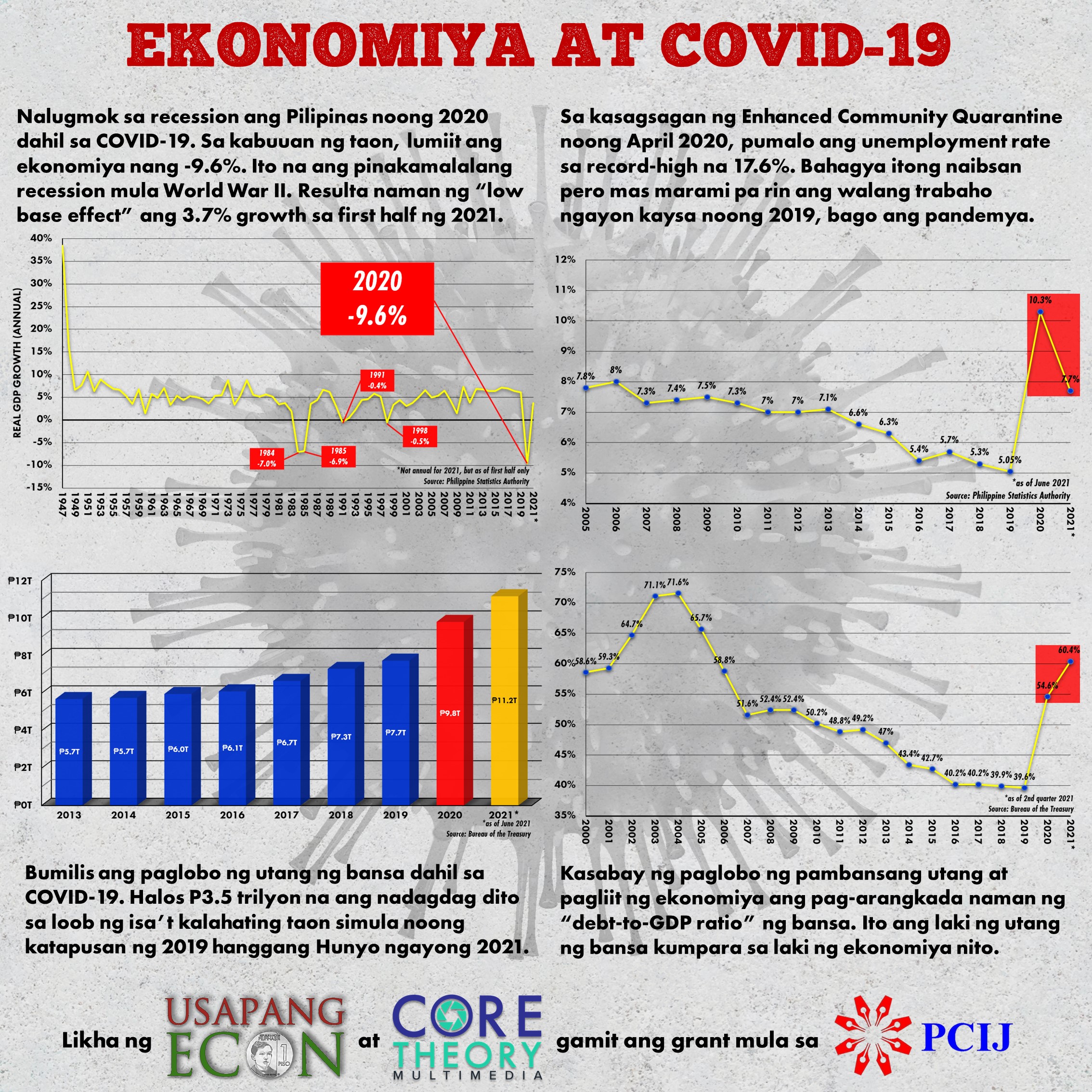 Much more worrisome than the accumulation of debt is the use of its proceeds. Many Filipinos fear rising debt because of the country’s traumatic experience during the Marcosian debt crisis in the early 1980s.

Zy-za Suzara, a budget expert and executive director of the Institute for Leadership, Empowerment, and Democracy (iLEAD), said in Filipino: “The fear surrounding debt stems from past experience of national funds being corrupted. People associate more debt with more corruption, because they can’t feel where the loans are spent.”

For her part, Monsod said, “When the government borrows on unproductive projects, that is a clear recipe for disaster.”

Big borrowings are much easier to justify to the public if the government can assure them that such funds will be used judiciously and on the right priorities.

Amid the Covid-19 pandemic, economists have pushed governments to drastically boost spending, especially on health and economic aid for households and small businesses.

But in the Philippines, the response of the Duterte government is, rather bafflingly, fiscal prudence.

Finance Secretary Carlos Dominguez said in an online symposium on March 17, 2021: “We were prepared to fight a long battle, exercising prudence over the use of our fiscal resources. The worst we could have done is to run out of water before the fire went out.”

“This is precisely the reason why we are committed to maintain fiscal prudence even as we try to stimulate the economy,” he added.

Not the time to scrimp

Filipino experts have expressed frustration, especially since this stance appears to be rooted in the government’s obsession on maintaining good credit ratings.

“They're still working on the pre-pandemic goal of trying to improve the credit rating of the country and not wanting it to deteriorate,” he said.

Suzara agreed. “Now is not the time to scrimp, now is the time for the government to spend a lot… How can the economy be competitive if its economy is dead, if many people are sick, if students can’t go back to school, and we have a learning crisis in the population? With these unaddressed problems, how can we hope to repay our debts?” she said.

In sum, the Philippines’ rising debt per se is a lot less worrisome than most Filipinos presume. It is perfectly normal for governments to borrow especially in times of crisis, when borrowing can serve as a literal lifeline.

Much more important is the country’s ability to repay its debt, which in turn hinges on the government’s ability to put new borrowings to good use. There are reports however that billions of available Covid-19 funds remained unspent and were simply remitted back to the Treasury.

Filipinos need to monitor the government’s spending more than ever. Our economy’s recovery is at stake. END

— PCIJ
Posted in: coronavirus pandemic
In This Series
Latest Stories