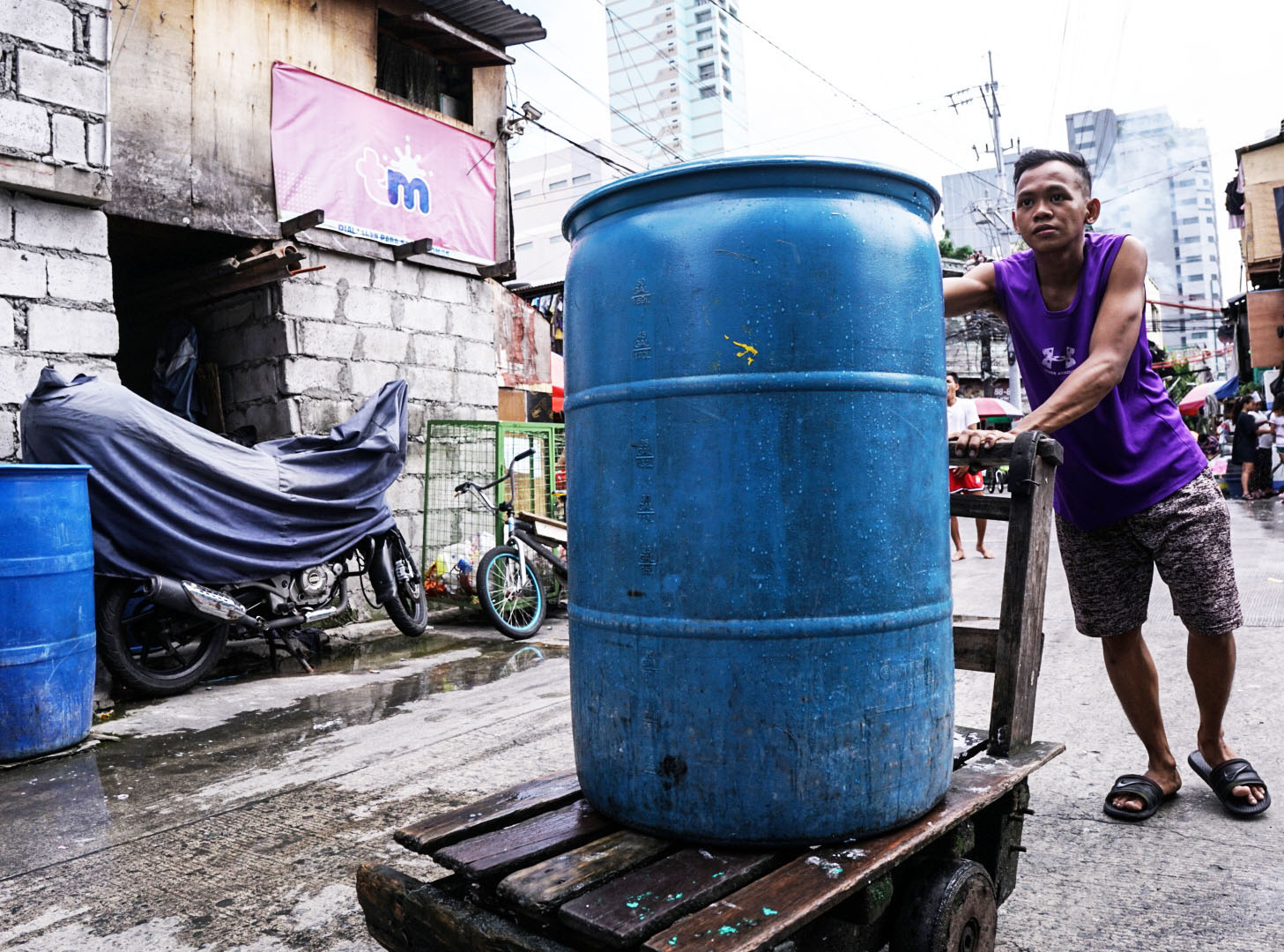 Nearly one in every 5 poor Filipinos do not have access to clean water. As lockdowns hit livelihoods, handwashing is a luxury they can’t afford.

When the Covid-19 pandemic broke out, health experts advised frequent handwashing with soap and water. It’s the cheapest and easiest way to avoid the deadly coronavirus disease, they said.

But there are many families in the Philippines that consider handwashing a luxury – among them the Potes family in Barangay 286 in Manila, the country’s capital.

The expanded household of six — Limuel, his wife and two children, his father, and sister in law — are illegally occupying a piece of land near Manila’s port area. They do not and cannot have a faucet — water concessionaires cannot install them — so they have to rely on peddlers selling water at as much as P50 per 200-liter drum.

Before the pandemic, the family was able to afford one drum of clean water daily. Limuel earned good money as a tricycle driver in Divisoria and his father augmented the family income by working in a junk shop.

These days, the Potes family could only replenish their drum once every three days. The lockdowns that have characterized government response to the health crisis have cost them their livelihood. They had to sell off the tricycle and a few bikes they owned to pay for their needs.

They ration the water supply to make sure they have enough to drink and to cook food with. They wash dirty laundry once every three weeks. They bathe only twice or thrice a week.

Potes and his family were among the beneficiaries of the government’s cash aid, but the financial assistance was not enough to cover their expenses. “Kinukulang pa rin kahit nakakakuha kami ng ayuda dahil may babayarang kuryente, tubig, saka utang (Despite the government’s cash aid, we still don’t have enough funds to pay for electricity and water bills, and our debts).”

It’s a common situation among households not just in Barangay 286 but also in many other slum areas in Manila.

Albert Cantollas, head of the village’s health emergency response team, said most residents only washed their hands before meals.

Some children and families turned to makeshift swimming pools or tubs to bathe together at the expense of physical distancing.

Like many of his neighbors, Potes didn’t think much of the need for handwashing because he saw Covid-19 as a simple infection that wasn’t much worse than fever and flu. That was until his father was rushed to the hospital and tested positive for the disease in March 2021, a year since lockdowns in Metro Manila were first imposed.

No handwashing facilities for almost 10% of families

Universal access to clean water and sanitation, measured in part by the proportion of population with access to handwashing facilities, is one of 17 goals under the 2030 Agenda for Sustainable Development.

In the Philippines, handwashing facilities, either fixed or mobile, had been observed in 90.6 percent of Filipino families, based on the 2020 Annual Poverty Indicators Survey released by the Philippine Statistics Authority.

This number saw a slight decrease of 3.1 percentage points from the pre-pandemic level of 93.7 percent in 2019. 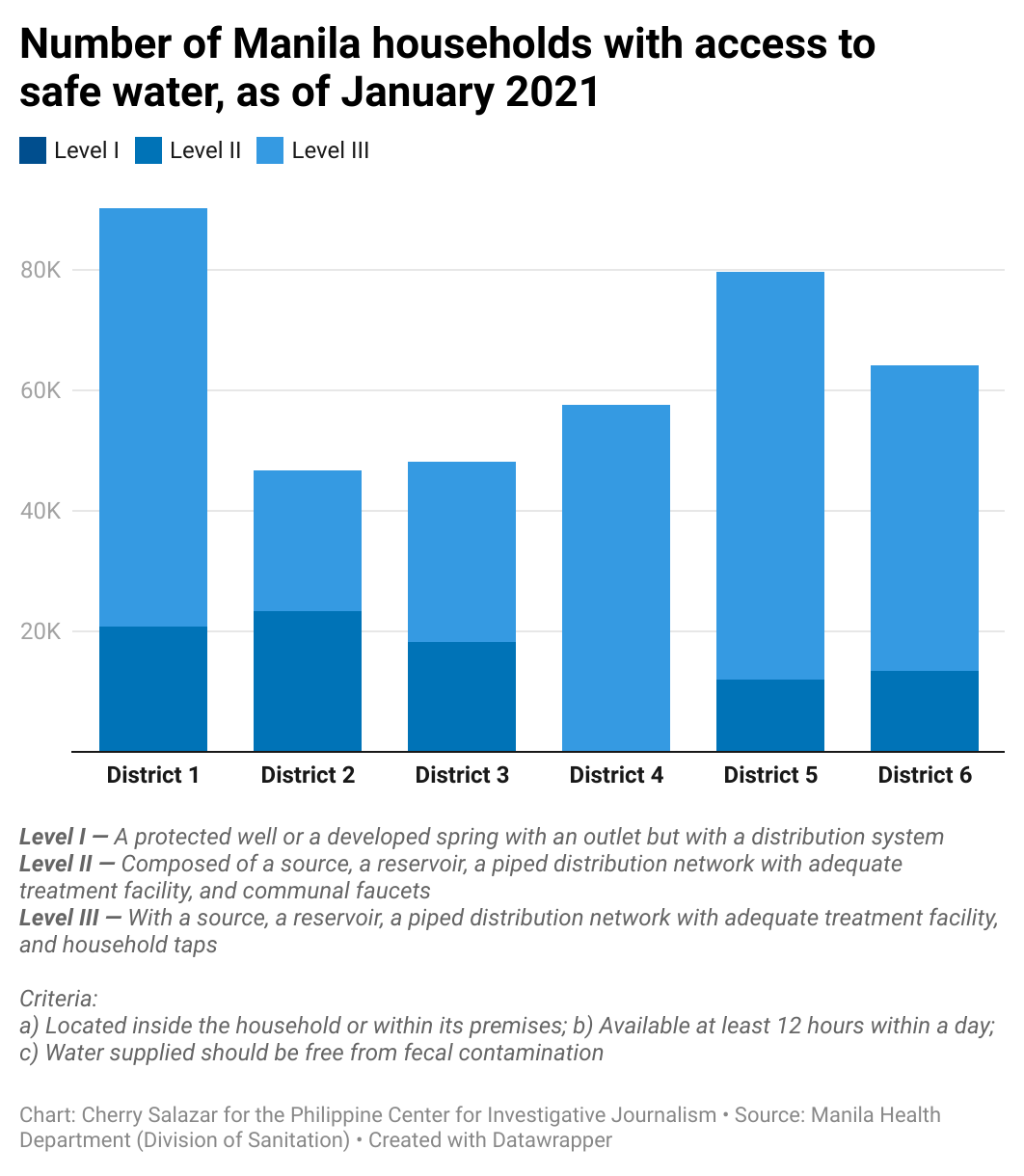 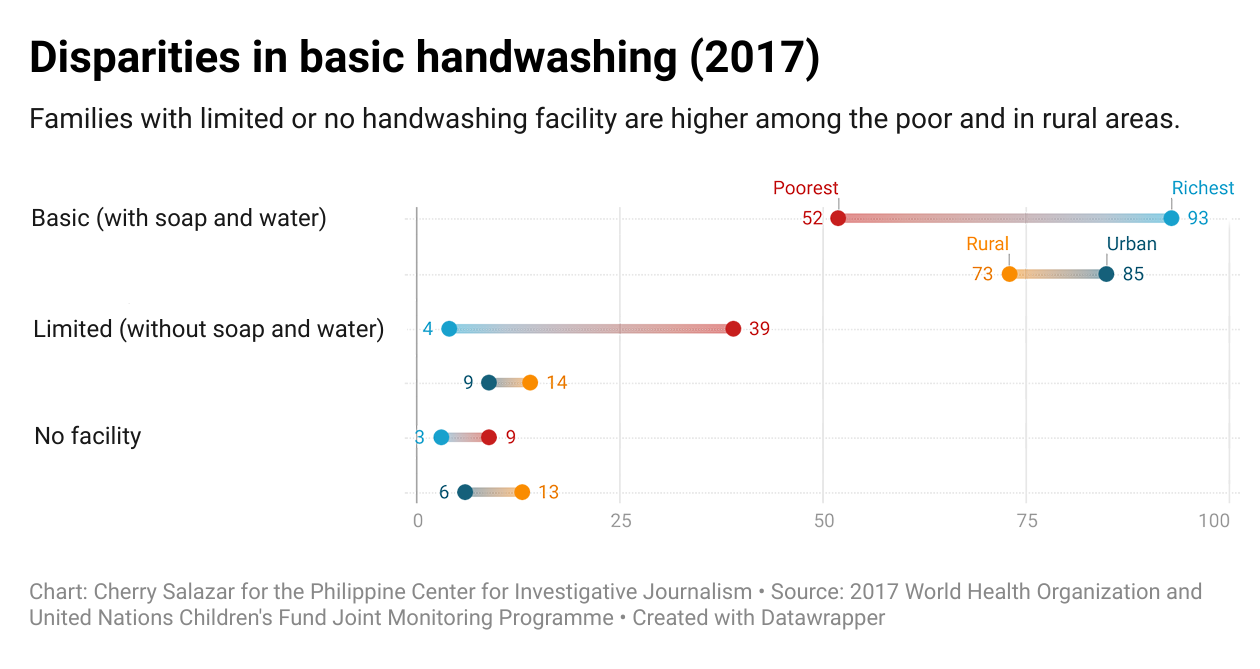 Among households with handwashing facilities, 2.7 percent were without access to water while 6.7 percent had no soap or other cleansing agents.

The data showed disparities based on area of residence and wealth. The proportion of families with limited or no handwashing facilities at all increased in rural areas and among the poorest quintile, according to the 2017 joint monitoring program (JMP) of the World Health Organization (WHO) and the United Nations Children’s Fund.

But access and coverage did not mean quality, WHO Philippines environmental health technical officer Bonifacio Magtibay told the PCIJ.

He also raised the issue of the quantity of water supply.

The WHO estimated that 1.5 to 2 liters of water is needed per handwashing event.

Many Filipinos believe poor communities have developed immunity from infections because of their exposure to unsanitary environments, but barangay officials themselves admitted that their records only reflected those who got tested for the infection. There may be undetected cases because the communities and the residents cannot afford the tests, they said.

Barangay 105 — which includes the slum areas Happyland, Helping Complex, and Aroma Compound — is among the largest villages in Manila.

Both Polison and Cantollas of Barangay 286 noted that majority of Covid-19 cases in their respective barangays were confirmed by swab tests required by employers.

As the Delta variant spread in the country, however, the city government of Manila reminded its residents to observe health protocols. END

*Top photo: Twenty-one-year-old Limuel Potes pushes a wooden cart he borrowed from a neighbor to help transport a plastic drum he will have refilled. Before the pandemic, Limuel’s family replenishes their water supply at least once a day. They can now only afford to pay for their water supply every three days. Photo by Mores Heramis

*This story was produced under the Covid-19 Explainer Project of the Philippine Center for Investigative Journalism.

— PCIJ
Posted in: coronavirus pandemic
In This Series
Latest Stories

Explore the offshore financial dealings of Arthur Tugade, Dennis Uy, and other Philippine power players in the Pandora Papers