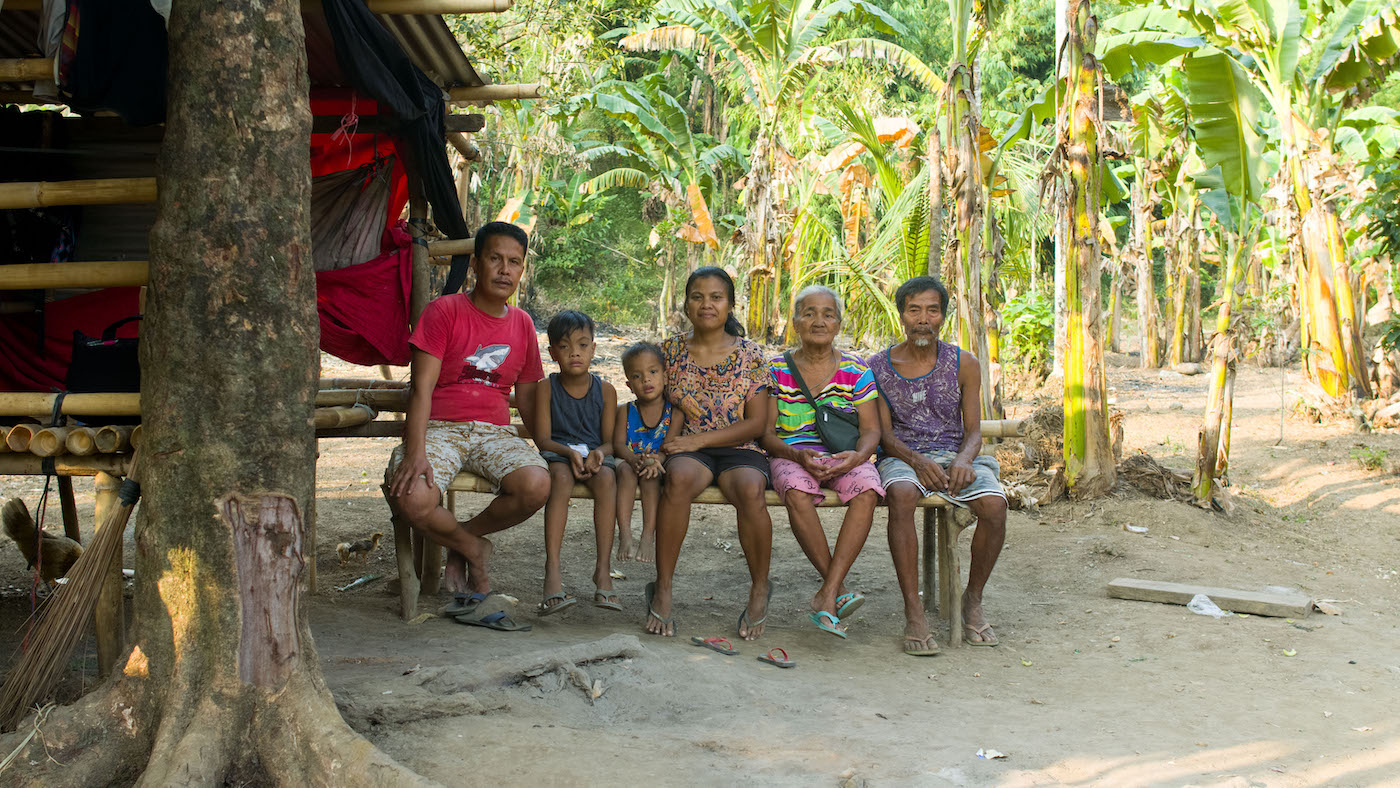 Isolated Philippine communities are safe from coronavirus, but not from hunger

The Dumagat tribe in upland Brgy. Puray in Rodriguez, Rizal has remained free from Covid-19 but pandemic lockdowns are hitting them where it hurts the most – their livelihood.

When Dahlia Cruz-Cabio returned home empty-handed after lining up for emergency cash aid during a strict lockdown in April 2021, her 85-year-old mother Conchita was forced to make the long trip from their home in an isolated upland village in Rodriguez, Rizal to sell fruits and vegetables in the town proper.

Dahlia said the family’s rice supply would only last until dinner that day. They counted on government aid – P4,000 or about $80 was promised – to tide them over during the lockdown. It turned out the Department of Social Welfare and Development’s (DSWD) list of beneficiaries did not include Dahlia and her mother’s names.

Dahlia was puzzled why they didn’t qualify as aid beneficiaries. Not only are her parents elderly – her father is 90 years old – they are also members of the vulnerable indigenous Dumagat tribe in the isolated Brgy. Puray in Rodriguez town.

The family would have wanted everyone to hunker down at home and stay away from the densely populated town proper, where Covid-19 cases were increasing at an alarming rate. Without the cash aid, however, they were left without a choice.

“My mother stressed that if we just stayed here and did nothing, we won’t die from the virus but we would die of hunger,” Dahlia told the Philippine Center for Investigative (PCIJ) in Filipino.

The upland village of the Dumagat was identified by the Bureau of Local Health Development as a “geographically isolated and disadvantaged area” or GIDA – referring to hard-to-reach communities separated from mainstream society and lacking in socioeconomic development.

Motorcycles and their habal-habal variety are commonly used to navigate the rugged road conditions in Puray. But Dahlia’s home and other houses that sit atop hills and mountains can only be reached by walking and climbing.

Residents believe that because their place is classified as a GIDA, they are protected from the dreaded virus that has devastated Metro Manila and other densely populated urban centers across the country.

Indeed, Brgy. Puray remains Covid-19- free to this day. However, the pandemic lockdowns have hit residents like Dahlia and Conchita where it hurt the most – their livelihood.

In October, the International Labor Organization (ILO) recommended that indigenous peoples’ livelihoods and local economies be strengthened during the pandemic to ensure the sustainability of their communities. The ILO report, titled “The impact of Covid-19 on indigenous communities: Insights from the Indigenous Navigator,” was based on first-hand information on the situation of indigenous peoples in 11 countries, including the Philippines.

Brgy. Puray is just one of 4,317 GIDA barangay (villages) all over the country, according to government data. Regions with the most number of GIDA villages include the Bangsamoro Autonomous Region in Muslim Mindanao (BARMM) with 628, Bicol with 489, Northern Mindanao with 393, Zamboanga Peninsula with 365, and the Cordillera Autonomous Region (CAR) with 350.

Many of these areas are even harder to reach than Brgy. Puray, and with populations even more marginalized. 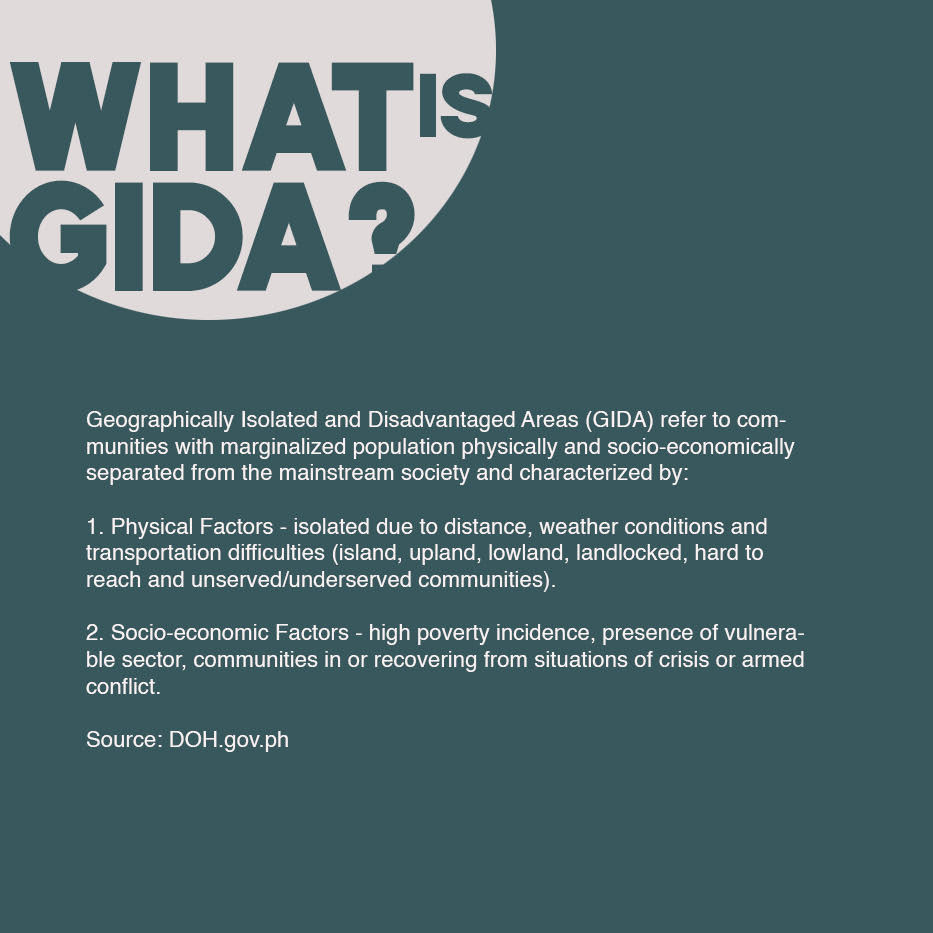 The Dumagat in Brgy. Puray have seen earnings from their main livelihood of fruit and vegetable farming either go down drastically or totally disappear as the country reeled from the world’s longest and strictest lockdown.

In Dahlia’s case, getting rice for her family’s meals was never a problem before the pandemic. She used to earn about P5,000 a week from selling produce near the Rodriguez Municipal Hall during “blockbuster” weekends, when there would be queues of people buying fruits and vegetables from her.

With such a comfortable income, Dahlia could afford to buy pork and chicken meat for her family’s meals, shop for new clothes for her children, and even save money for emergency needs such as health checkups and medicines.

Since the pandemic broke out, she has not had the chance to sell in her old market. On a “good” week these days, Dahlia could earn only about P350 from selling her produce. Buying rice has become a constant struggle and one of her biggest worries. She can scrimp on other food for her children so long as they have rice on the table.

Aside from quarantine restrictions preventing them from freely selling produce at the town center, farmers also have to contend with the cost of habal-habal rides going up by as much as three to six times more than pre-pandemic fare, to P350 per one-way travel. This was due to physical distancing protocols where only two passengers are allowed per ride. The fare used to be P60 per passenger.

Hamstrung by such limitations amid the pandemic, Puray farmers are forced to turn to traders who go up to their communities to buy their produce but at low or bargain prices.

“For example, traders would buy jackfruit from us for P10 per kilo, but in the town proper, that could sell for P40 a kilo. So that’s double, even triple what they paid us. We’re practically selling at a loss,” Dahlia said.

The practice of traders haggling for low, if not unjust prices – “pambabarat” in local parlance – also hurts the cultural sensitivities of the Dumagat, tribal leader Ricardo “Rafu” Vertudez said.

“We would even prefer it if people simply asked for our products for free rather than haggle with the prices. We won’t turn down requests for free vegetables and fruits – that’s what we have been accustomed to. But haggling is insulting for us,” Vertudez said in Filipino.

Vertudez said his fellow Dumagat’s sentiment was that resuming their livelihoods closer to pre-lockdown levels would be the key to surviving the pandemic. And for the 73-year-old whose standing in their tribe is similar to that of a “datu,” it all starts with finding a good market for them to sell their produce.

During the administration of the late President Benigno Aquino III, Vertudez went to Quezon City Hall to ask then Vice Mayor Joy Belmonte that he be allowed to sell vegetables and fruits inside Quezon City Circle, which was always brimming with people – employees, commuters, and passersby.

Vertudez got his wish and his business turned around. He earned between P5,000 to  P15,000 weekly, selling for just several days a week. From this much-improved income, Vertudez supported his daughter’s education until she finished college.

He dreams of finding another viable market again because his grandchildren will soon start college. But the pandemic is getting in the way and is further aggravating their already challenging condition as indigenous people living in a GIDA barangay.

They are also still recovering from the devastation left by “Ulysses,” the strong typhoon that hit late last year and destroyed many of their fruit-bearing trees and crops.

“The truth is, we, the Dumagat of Montalban (former name of Rodriguez) are really being left behind. Look at our roads. What pains me is we are just so near Quezon City,” he said.

Vertudez said many of his fellow Dumagat were starting to get angry with their situation. Some even wanted to start rallies to call attention to the many hardships of living in a GIDA barangay.

“I tell them that we should try to engage officials instead. Ask the questions that are bothering us, like ‘Why are our roads still like these?’ ‘Why is it so difficult for us to bring down our produce to sell?’ ‘Why are we not being assisted with a vehicle to transport our products?’”

In June 2021, Dahlia finally got her emergency “ayuda” (cash assistance) of P4,000 after she filed a petition asking the DSWD and barangay officials to include them as beneficiaries.

It turned out they were not in their homes when a census was conducted in Brgy. Puray for potential recipients of the emergency cash assistance. Dahlia insisted she and her mother, who belong to separate households, were already in the master list of beneficiaries as they received P6,500 each for two rounds of assistance from the social amelioration program during last year’s lockdown.

Because the rainy season will make their life in isolated Puray doubly challenging, Dahlia used most of the money to repair their house that was damaged by Typhoon Ulysses.

Dahlia managed to buy five kilos of rice from what was left of the “ayuda.”

Puray residents have started a petition requesting their roads to be repaired and cemented. Their letter is now with the municipal government of Rodriguez.

But until there is no concrete action on their appeal, Dahlia will have to find ways to cope with their tough road conditions. She said she prioritized the repair of their house as she did not want her children to suffer from leaks with the onset of rains. Their home will be her children’s only refuge from heavy flooding and landslides.

In August, Metro Manila and nearby provinces like Rizal went back in lockdown amid the threat of the Delta variant of the coronavirus. Dahlia expects they will struggle to find money again to replenish their rice supply.

These are the usual woes of residents living in isolated places, said Dahlia. She told PCIJ: “It’s good that you are asking how we are doing. People asking about our condition rarely happens.” – with additional reporting by Rachel Panganiban

TOP PHOTO: Dahlia with her husband, two children and her elderly parents as they relax by her parents' little hut. By Gio Gonzalves