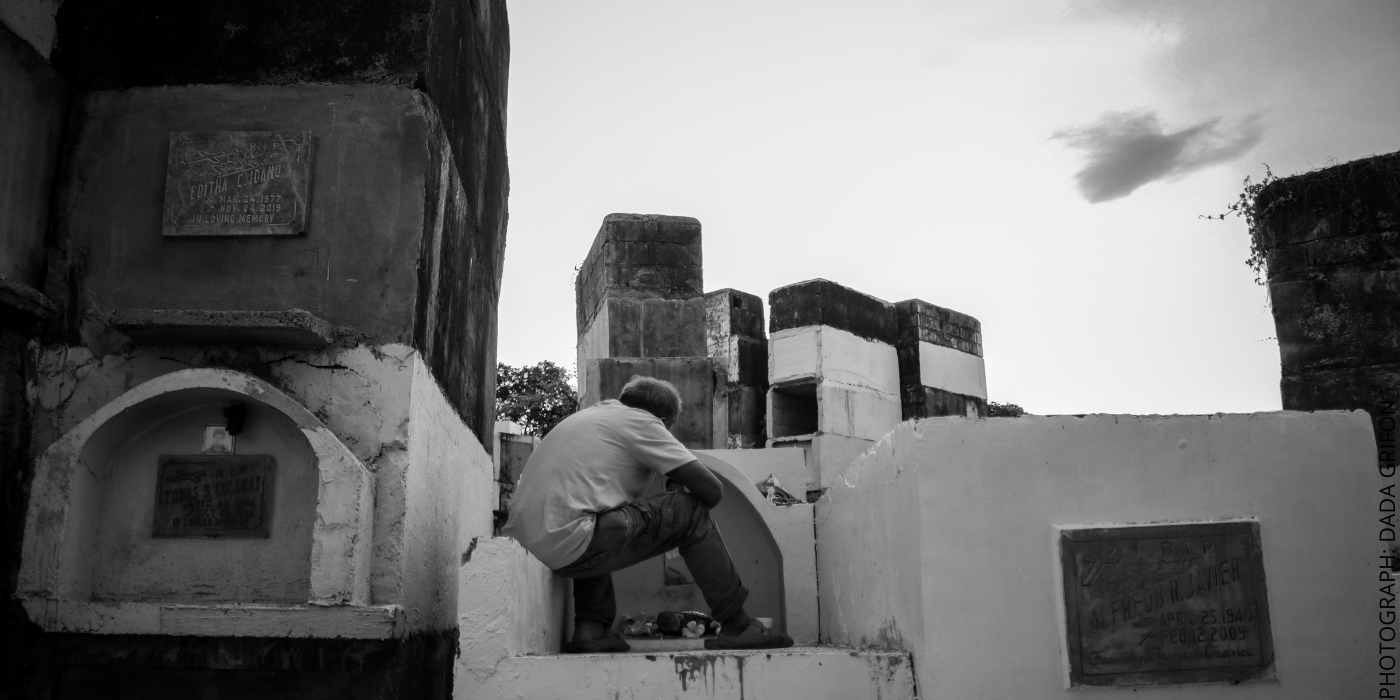 Grifon uncovers four stories of EJK victims, all of which were treated with disrespect until their last breath as their families are forced to accept “pneumonia” as the victim’s cause of death. Funeral parlors and policemen allegedly make business out of these cases of vigilante killings, leaving the victims and their families helpless in searching for justice.

Even in death, the State treats victims of extrajudicial killings as mere “collateral damage” in the Duterte administration’s bloody anti-drug war. The families of the victims choose to remember their lost loved ones with dignity, something that was denied of them when their deaths were covered up by falsified death certificates. 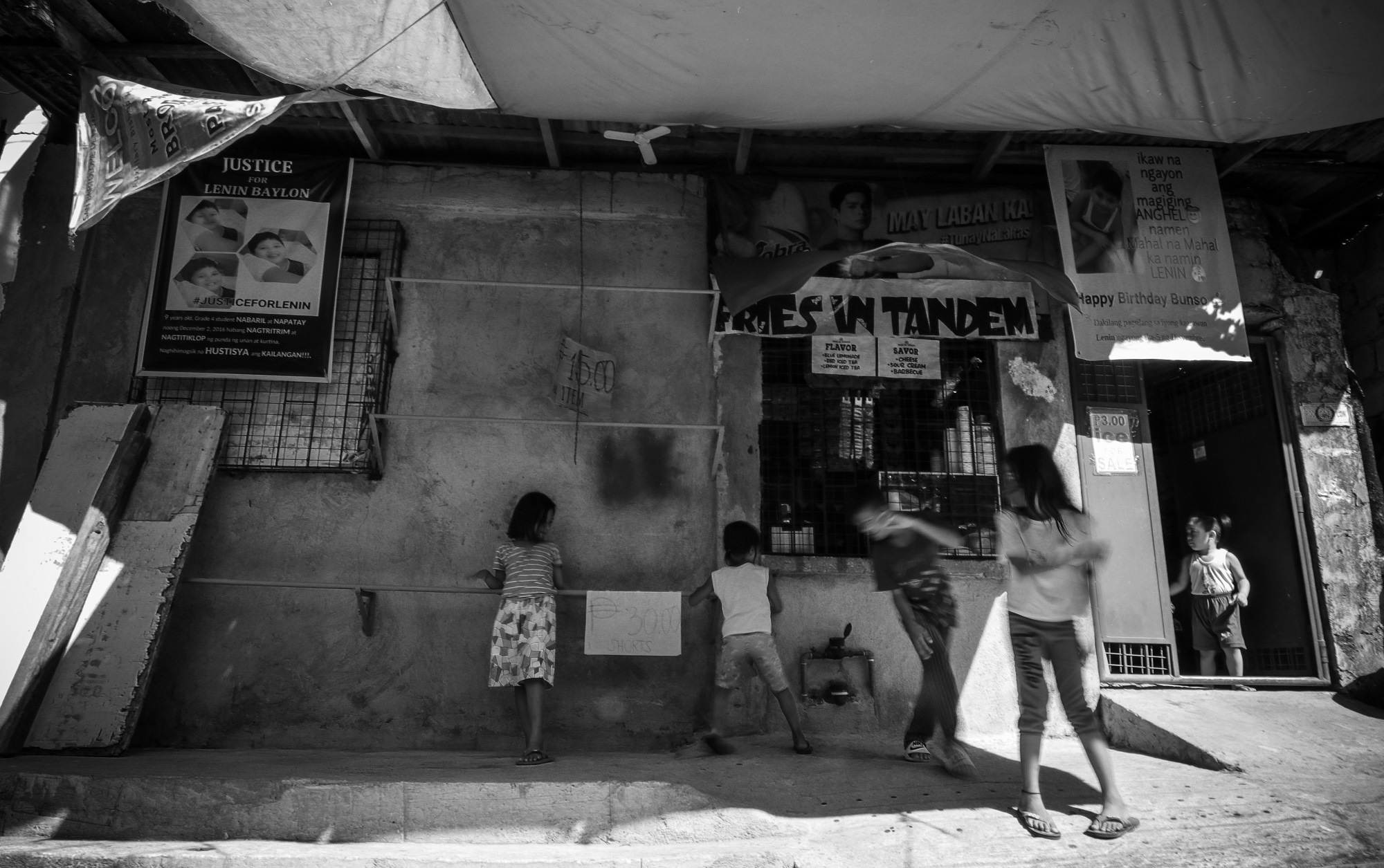 Children play on the street outside the Baylon family’s residence. Tarpaulins of drug war victim Lenin Baylon, who used to be their playmate, hang in front of the house.

Sweet and thoughtful. This is how Lenin Baylon, a casualty of the drug war, is best remembered by his family. The child’s silly but high-spirited character drew the family closer, said his father Rodrigo. With that gone, the joy that once filled their home has been replaced with ceaseless longings. They miss him every day.

(He wanted to finish school and teach less fortunate kids. With his mother gone, he said he would help me. He said he’d take care of me.)

Every day, after coming from school, Lenin went to their neighbor’s house to fold curtains and pillowcases. He earned at least P20 for every visit, and saved the money to buy toys.

Lenin died three days before his birthday. Rodrigo recalled that they had been planning a special celebration for his 10th birthday. Lenin’s 10 siblings wanted to fulfill the wishes of the bunso, or the youngest in the family: a Jollibee birthday celebration in school, a television set (so he didn’t need to watch at the neighbor’s house) and a Stephen Curry jersey.

None of these plans were carried out. On Dec. 2, 2016, everything changed.

It was an ordinary afternoon. Lenin was playing with his friends when three vigilantes came running after two alleged drug suspects. Eight shots were fired. Two targets were killed. Two other children were hit by stray bullets. One of them was Lenin.

Lenin was only nine years old when he died. 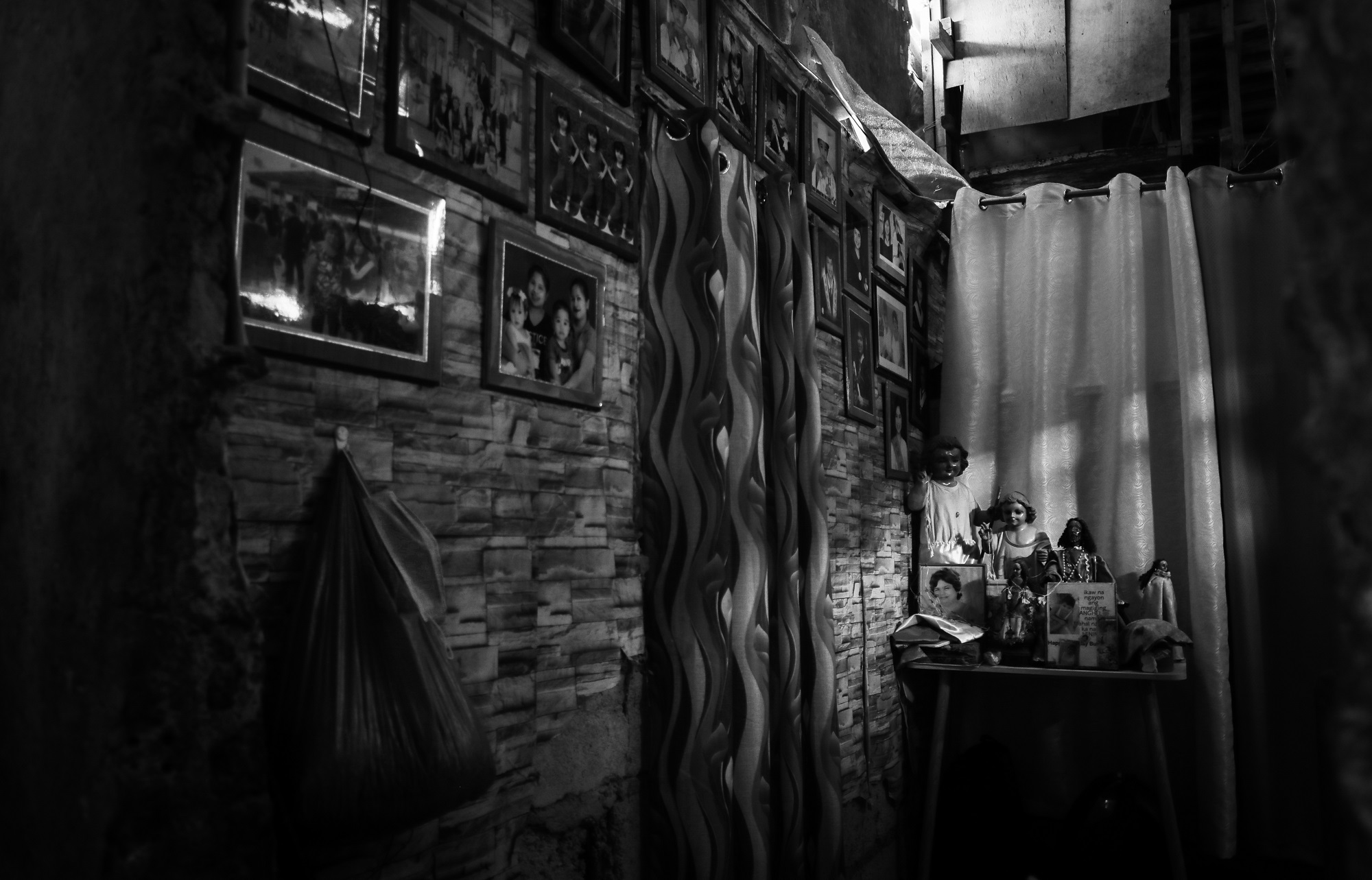 A wall in the Baylon family home displays portraits of family members and showcases their achievements. Beside it is a special altar put up to venerate the lives of lost loved ones and keep their presence at home. 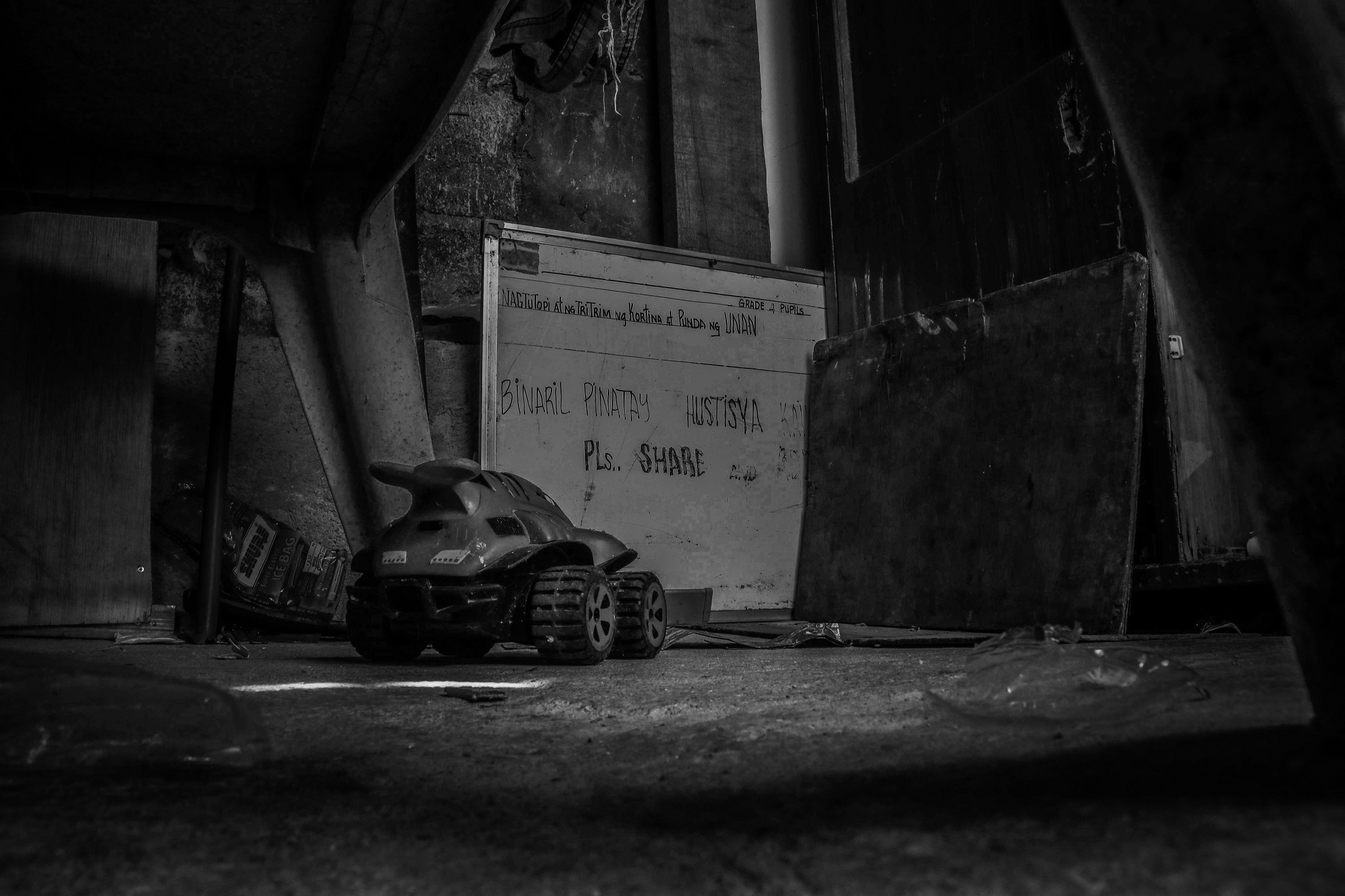 A sign calling for justice, put up outside the Baylon family’s house, has fallen on the ground.

Lenin was more than a “collateral damage” of the violent war on drugs. What breaks Rodrigo and his family is that it wasn’t only Lenin’s life and dreams that were taken away. In his death certificate, Lenin was denied the truth and his dignity as a human being.

At the morgue, Rodrigo said, he was compelled by policemen to sign a waiver agreeing to put bronchopneumonia as the cause of death instead of a gunshot wound. Otherwise, he had to pay over P16,000 to the mortuary and over P20,000 for an autopsy, which his family could not afford. 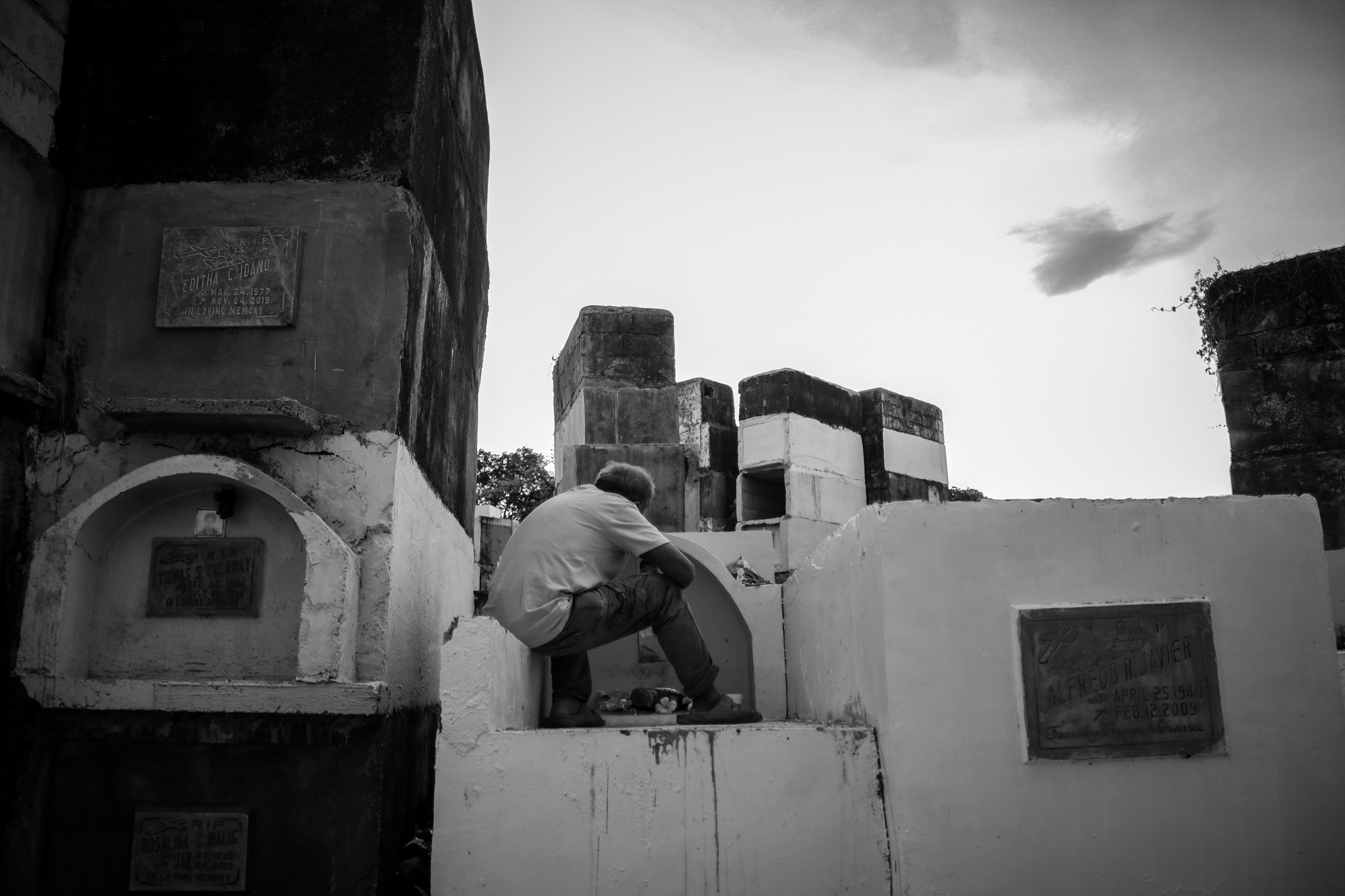 Rodrigo Baylon visits the grave of his son Lenin on his 13th birthday. Three years after his son’s death, Rodrigo assures Lenin that justice will be served.

(Our family was grieving back then because we lost Lenin. I thought we just had to go along with it. We were poor, we lost a son, and we had to pay for a great deal of expense. What was important, we thought, was to give the kid a proper burial.)

The false entry in Lenin’s death certificate is not an isolated case. There are more victims.

Jimmy was walking with his friends at dawn on Oct. 3, 2016 when two vigilantes riding a motorcycle stopped and fired at them. According to Jimmy’s sister Cherylyn, the suspects intended to kill a drug suspect who was on the government watchlist. Instead, they hit two innocent men, including Jimmy. The supposed target survived.

Jimmy succumbed to at least five gunshot wounds in his head and ribs. The death certificate however told a different story.

Cherylyn said their family was compelled to sign a waiver to replace the cause of death when she refused to allow an autopsy on his brother Jimmy. “Pneumonia” was written on his death certificate.

(We were told to agree with an illness as the cause of death. It couldn’t be a gunshot as we wouldn’t be able to get financial assistance. It was the first time the family lost someone and it’s because of gun fire. We were not ourselves back then, so we just went along with it.)

At a young age, Jimmy needed to work to provide for his family. At 17, he worked as a construction worker with his father.

(He showed tenderness to me and his father. I raised my children by doing laundry work. I raised them well. I know my son is innocent. We still can’t accept what happened to him.) 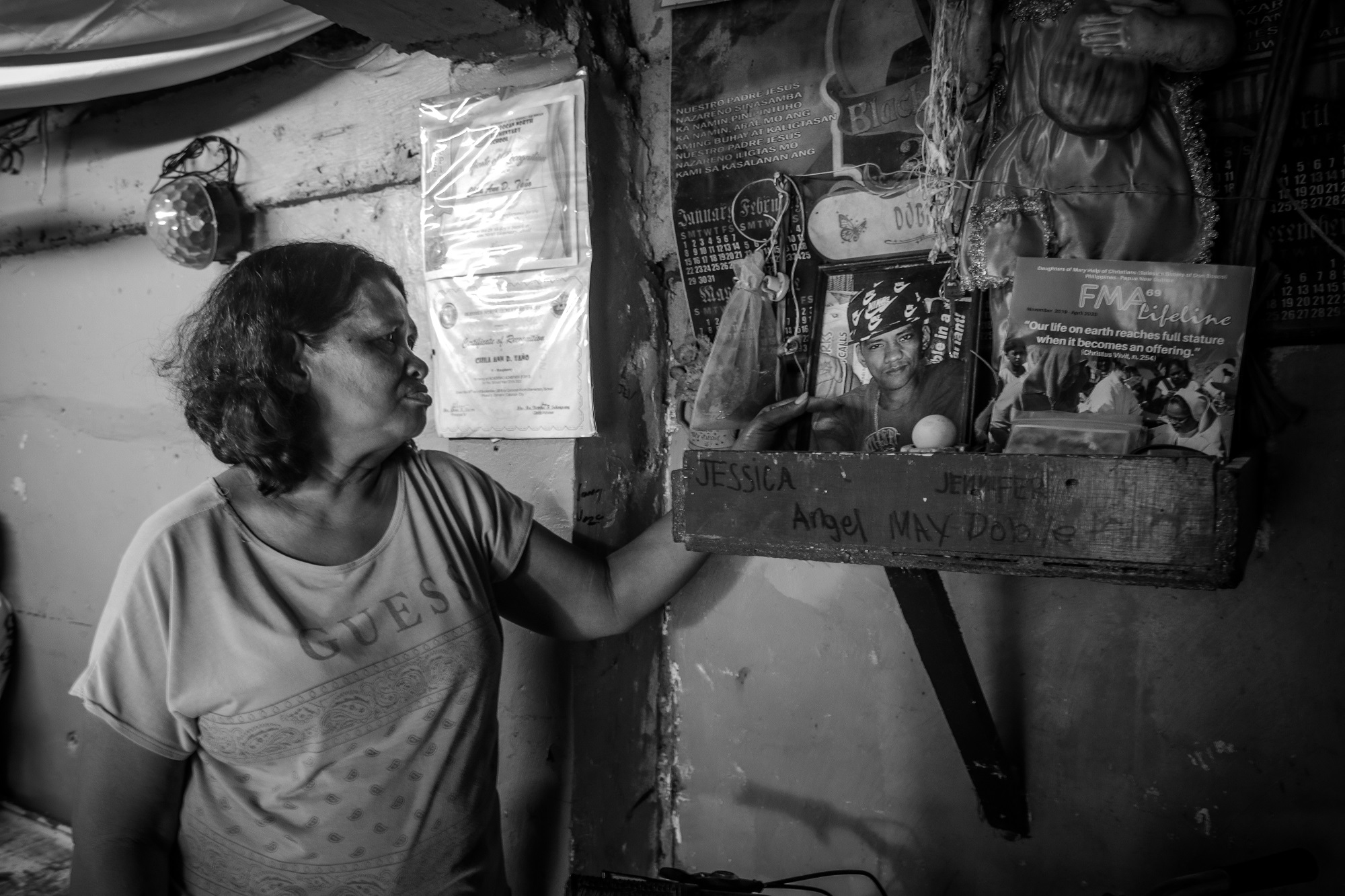 Since President Rodrigo Duterte took office, thousands have been killed because of his bloody campaign against illegal drugs. The Philippine National Police recorded 5,903 deaths in raids conducted from July 1, 2016 to Sept. 30, 2020.

But these numbers did not include those killed by masked vigilantes. According to human rights organizations, the real figure could be triple the number reported by the police. Victims’ families claim the police force was complicit.

Loved ones of victims of extrajudicial killings and other human rights violations don’t just suffer from the loss and injustice. They are also left with trauma and fear.

Lea Omega wishes she can just forget the tragedy of losing the love of her life. But the wounds are still as deep as they were five years ago.

She came home after enrolling her son to school on June 17, 2016 and found her husband missing. Alejandro could not be found for over a week. She knew of the rampant killings that time, but Lea believed her husband would come back. She knew Alejandro was not involved in drugs.

But in the ruthless drug war, anyone could become the next victim.

(At first, I couldn’t believe that what we saw was his lifeless body. But when I found the tattoo on his shoulder, a heart with my name on it, it was like the heavens fell on me.)

She found Alejandro lying at the morgue, with gunshot wounds and indications of torture. According to the funeral attendant, his almost mutilated body was found under a bridge. 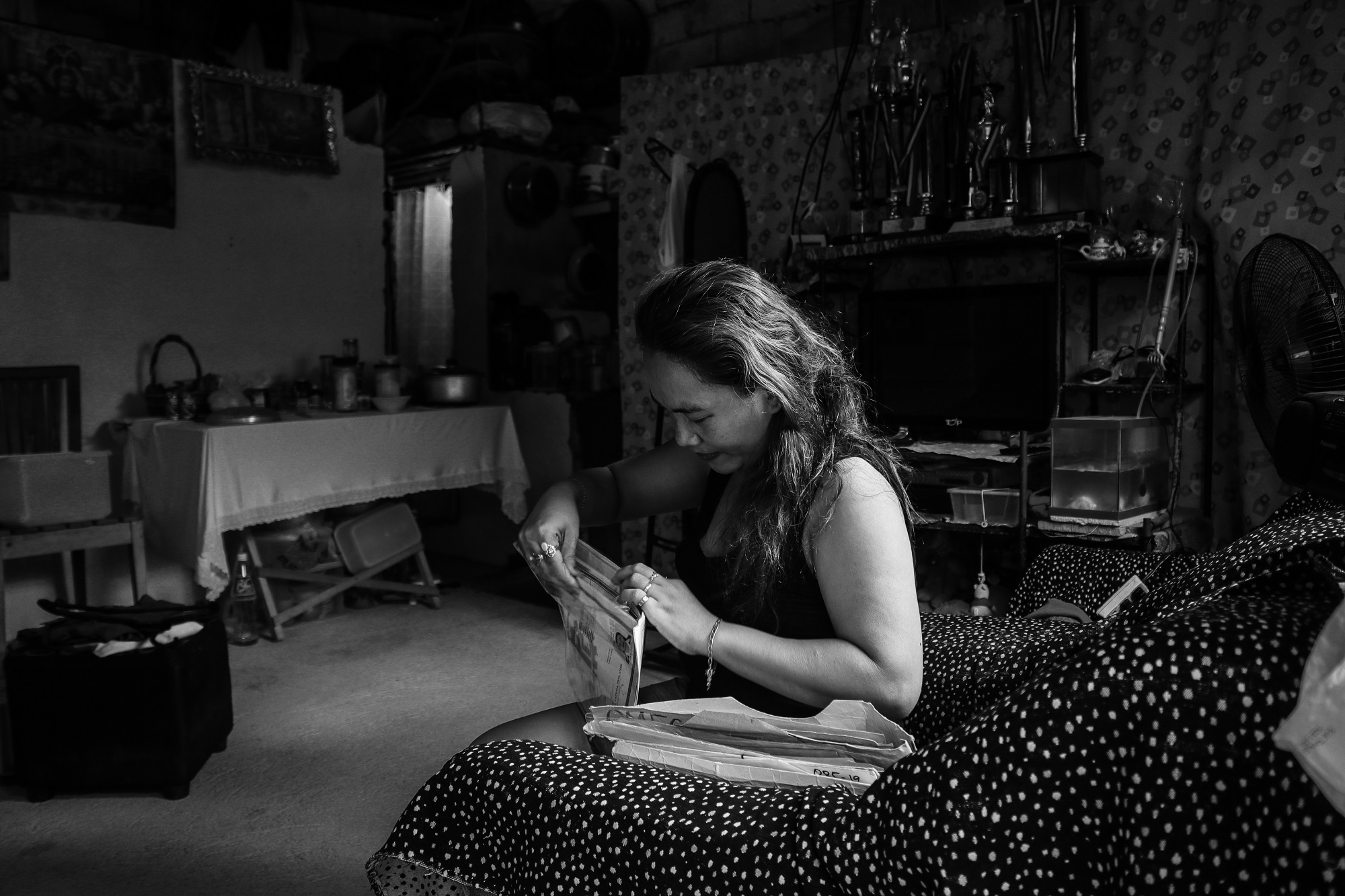 Already shattered by the tragic misery, Lea was unaware that his husband’s death certificate had been falsified. Like Lenin and Jimmy, Alejandro supposedly died of pneumonia.

The funeral parlor also produced an erroneous death certificate for another victim, Jonie Tejones. Like Alejandro, Jonie went missing for a week, after which his family found his mutilated body at the morgue.

(He was the only one at the morgue when we arrived. He had no clothes on and his innards were pulled out. His internal organs were like ground meat. Those who did this to him had no shame. They’re inhuman.) 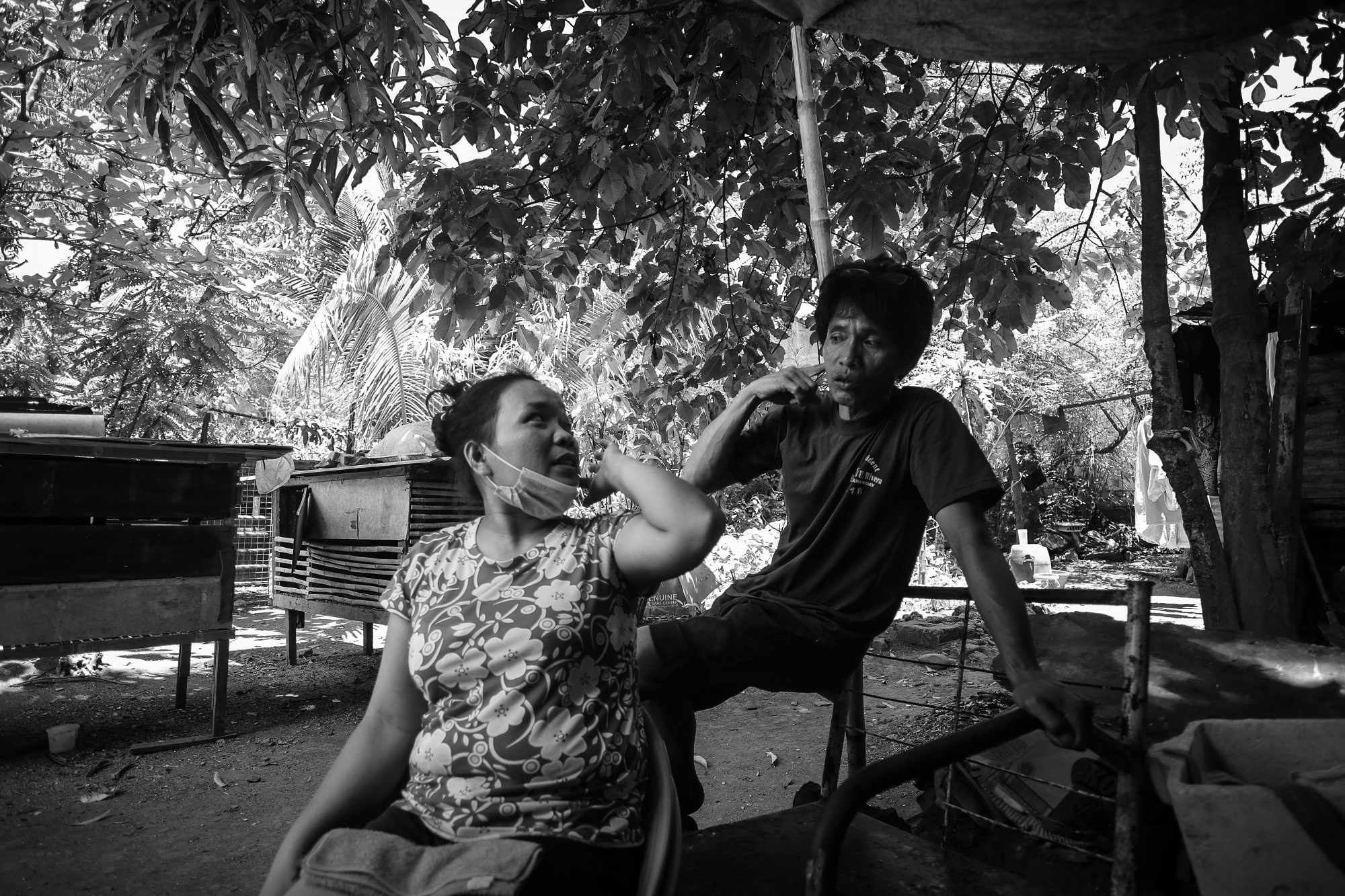 Jorem Tejones and wife Madonna recall the brutal image of Jonie’s body when they found him at the morgue. According to the affidavit, Jonie had marks in his hands and about 20 drill holes and gunshot wounds all over his body.

Since their family could not afford to pay for an autopsy that cost P20,000, on top of over P38,000 that they needed to pay for funeral services, a funeral attendant compelled them to sign a waiver. They were told that if they didn’t agree to state pneumonia as the cause of death, they would have a difficult time getting a death certificate from city hall.

Victims’ families thought the funeral parlors and policemen were out to make money off the victims’ bodies. From the police operations and vigilante killings all the way to negotiations with the funeral parlors, everything seemed coordinated.

Those who didn’t have the money to pay for funeral services would be buried in debt. If they didn’t pay, they wouldn’t be able to claim their loved ones' remains. The only choice for them was to sign the waiver.

Already victims of injustice, the families suffered yet another injustice when they were taken advantage of despite their loss. The biggest injustice was when the families were asked to consent to it.

This is the cost the families need to pay so they can give their loved ones a dignified burial. 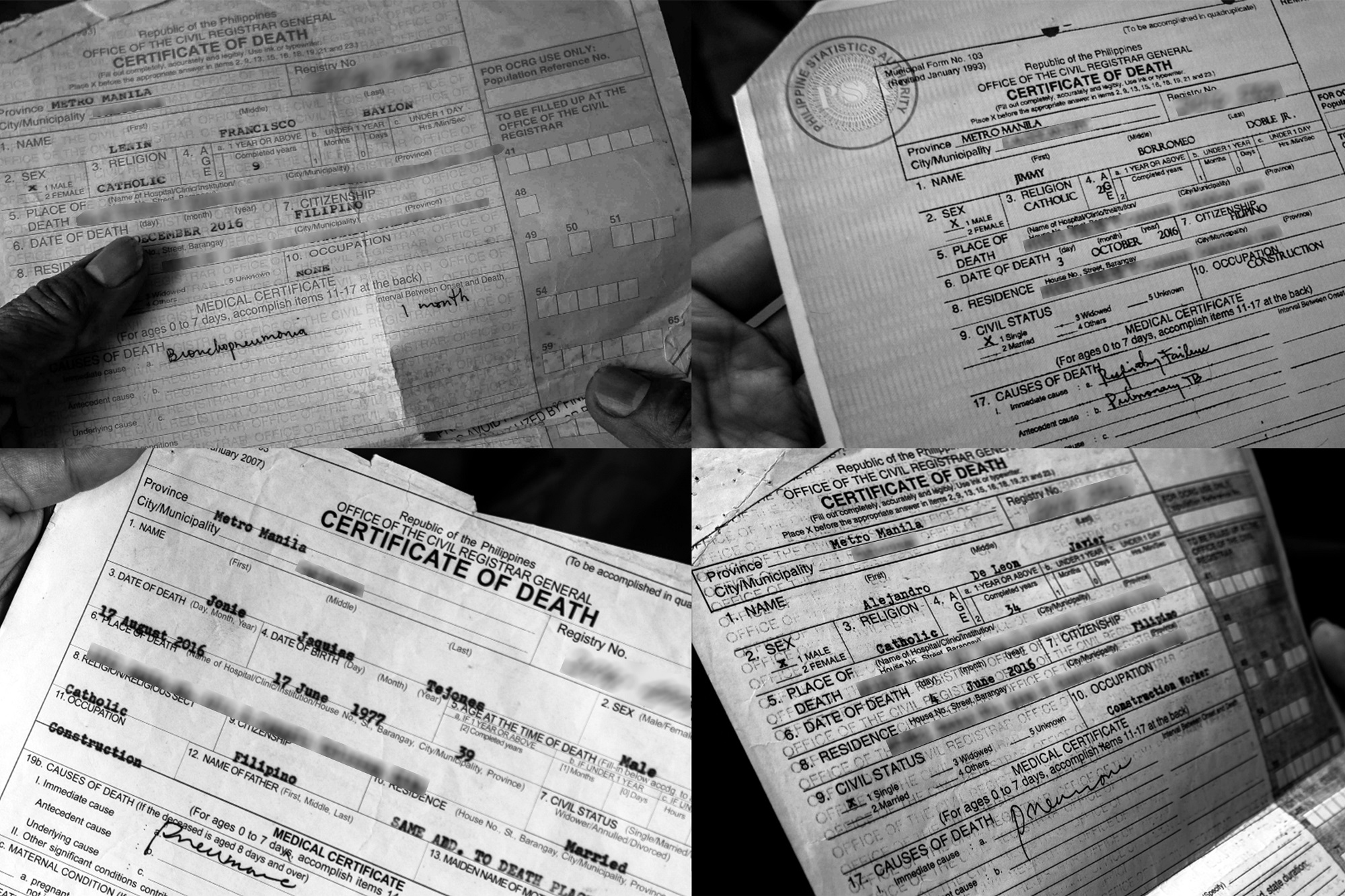 Falsified causes of death written on the death certificates of Lenin Baylon, 9; Jimmy Doble, 21; Jonie Tejones, 39; and Alejandro Javier, 34; all victims of extrajudicial killings in the Duterte administration's war on drugs. (Some details were blurred intentionally to protect the families.)

A death certificate is more than just an official record and a source of statistics. It contains facts on a person’s life and death. Moreover, it is necessary to obtain legal remedies, especially in claiming justice and accountability. 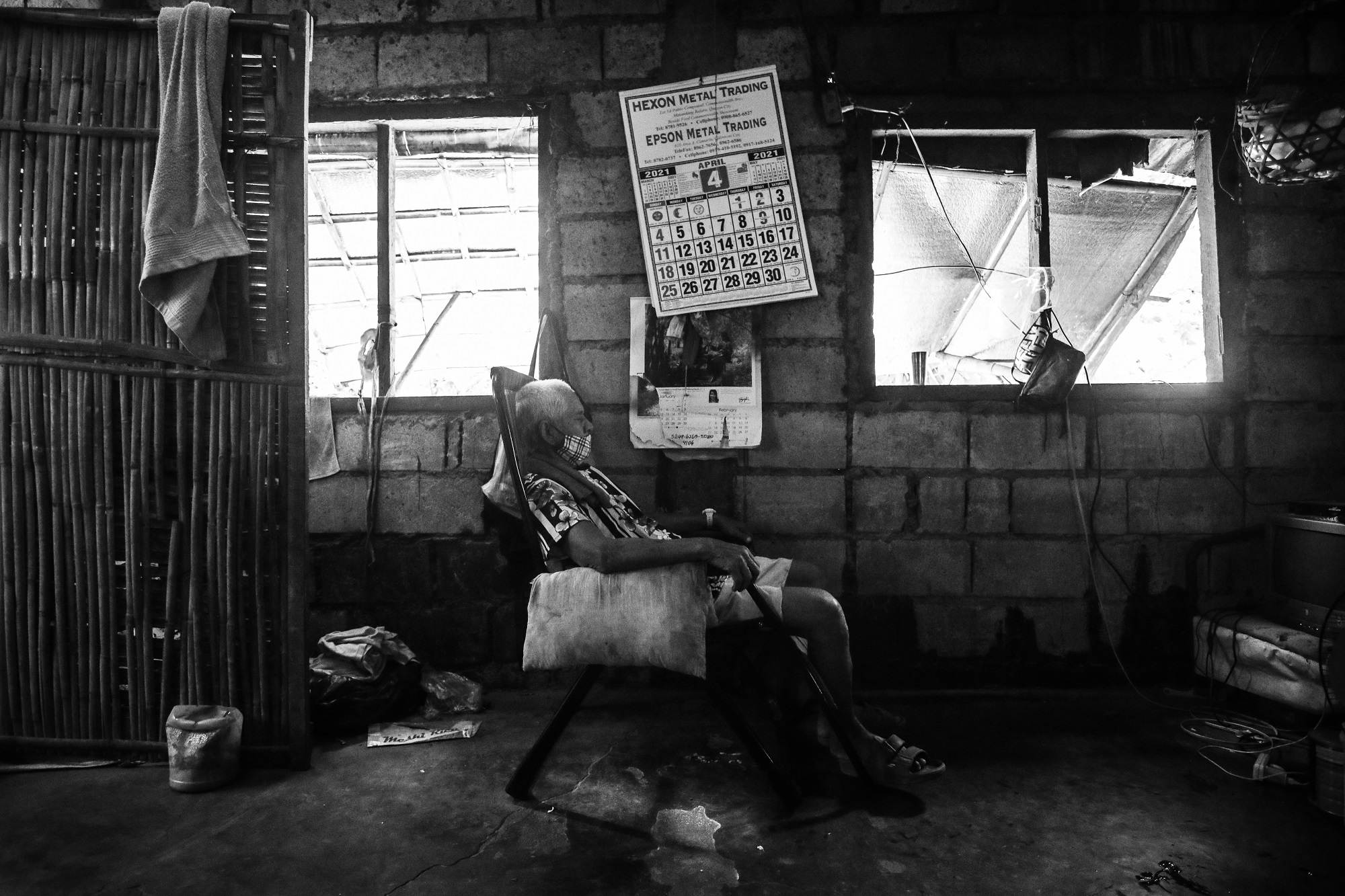 Julio Tejones, a widower, takes a nap in a chair, exhausted from his daily duties of collecting garbage, cleaning the barangay (village) hall and watching over his four grandchildren. He lost two sons, Jonie and Manuel, both victims of extrajudicial killings. 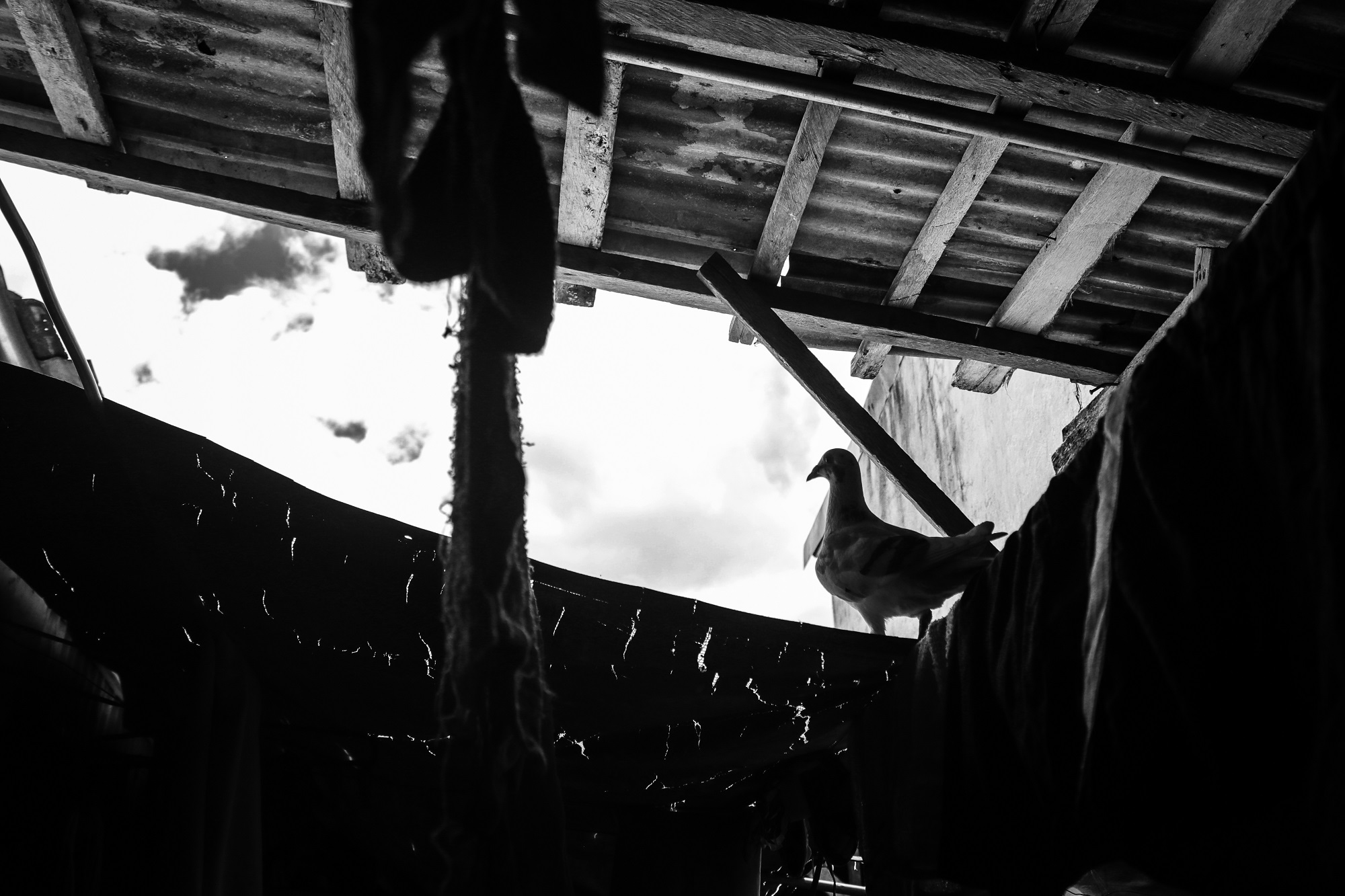 A pigeon looks out below the makeshift roof of the Baylon family home. It was the pet of Lenin and his siblings.

Rodrigo Baylon took a leap of faith for Lenin. In August 2019, he filed a petition in court to correct the entry in Lenin’s death certificate. He was represented by lawyers from IDEALS, Inc., a legal advocacy and service institution for the vulnerable and disempowered sectors, particularly victims of human rights violations.

(The cause of death was not bronchopneumonia, but a gun. The truth has to come out. One life was snuffed out by a gun.) 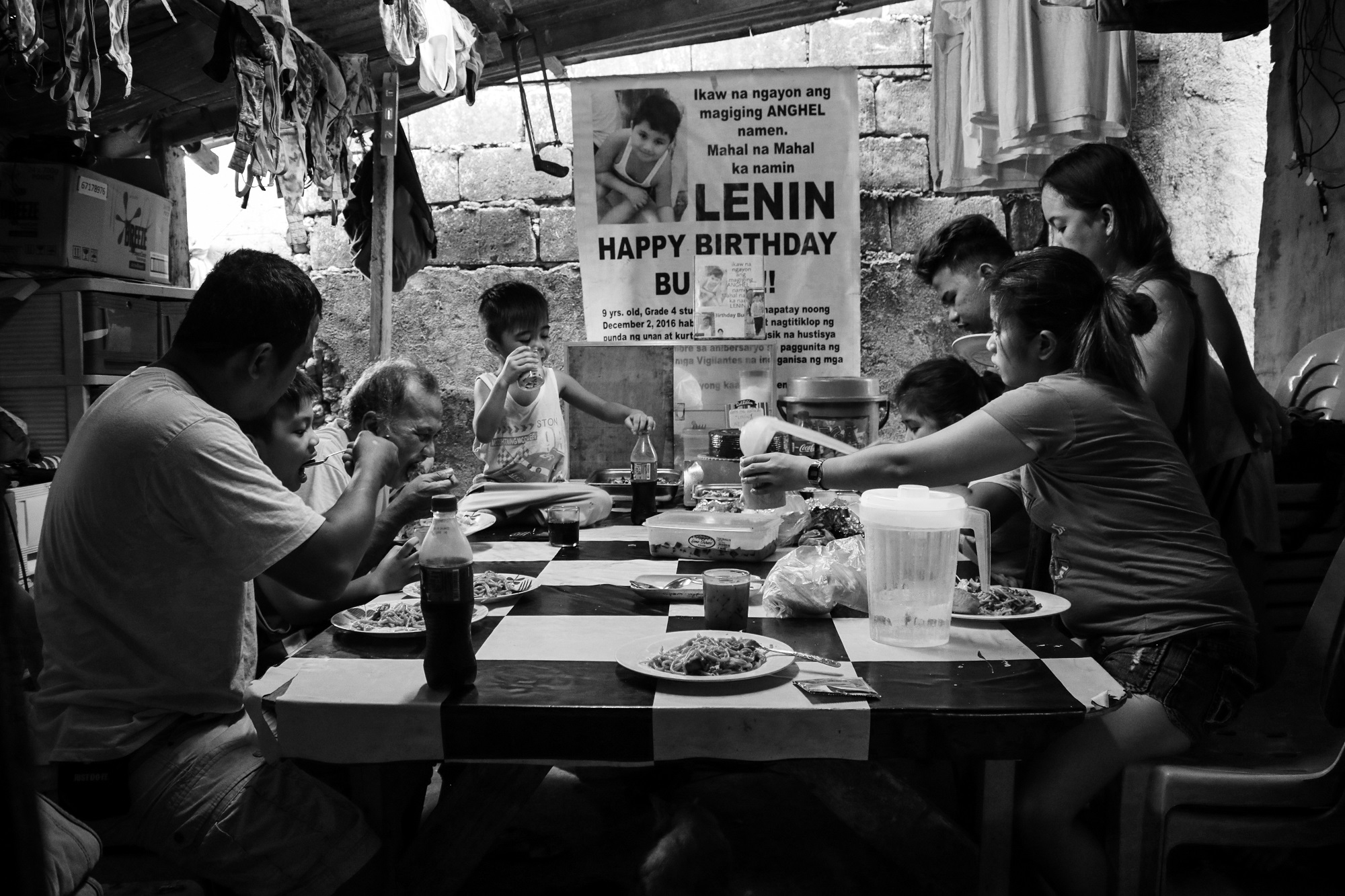 The Baylon family celebrates Lenin’s 13th birthday on Dec. 5, 2019. On this day, the family also marked the first court hearing for the petition to correct Lenin’s falsified death certificate.

The following year, the court denied the petition, citing insufficient evidence and lack of expert testimonies to support the claim that Lenin died from a gunshot wound. The regional trial court did not accept the medico-legal certificate that indicated that the child was killed by a stray bullet.

The setback did not stop Rodrigo from pursuing his cause. On Nov. 24, 2020, Rodrigo brought his petition before the Court of Appeals.

“Bakit hanggang ngayon lumalaban parin tayo? Kasi gusto nating ilaban ‘yung totoo. Kung bibigay ka, papaano natin ma-prove ang totoo? Huwag tayong mawalan ng pag-asa. Ang laban kasi may tututunguhang tagumpay (Why are fighting for the truth to come out. If we give up now, how are we going to prove it? We shouldn’t lose hope. We will find victory at some point),” Rodrigo said. 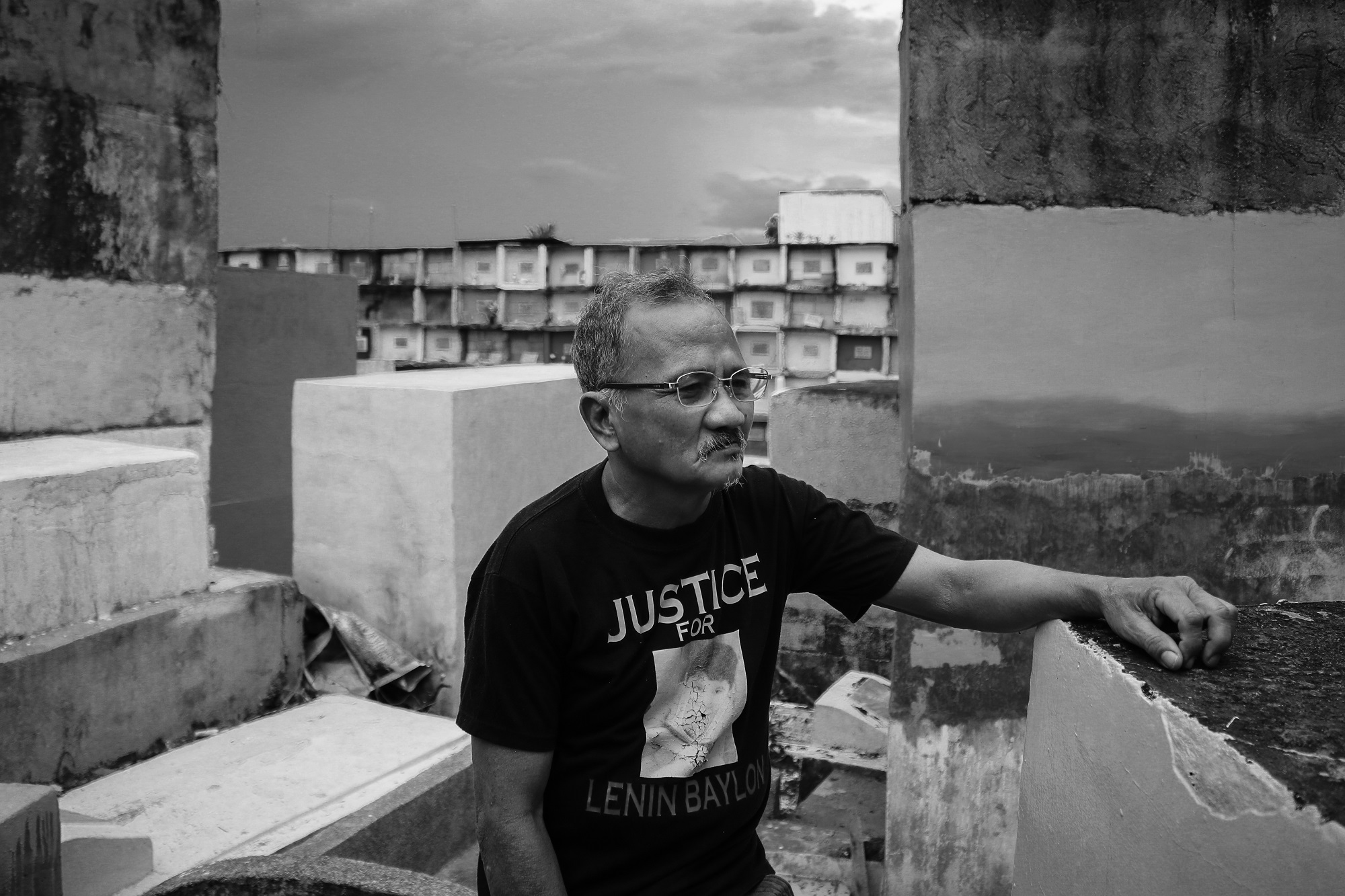 The systematic falsification of death records remains underreported, along with other human rights violations and abuses related to the war on drugs. There are more truths left unexposed.

Five years since the drug war and amid the pandemic, the victims’ families have found courage to speak the truth. They won’t allow their stories to be forgotten.

The fight goes on, they know. This time, with amplified voices.