“Why would you approach the president? What is the message that you want to make especially if we look at the possibility that you will be aspiring for a higher position?”

Rodrigo Duterte had been installed president for a little over a month when he received justices of the anti-graft court Sandiganbayan on Aug. 4, 2016 in “Panacañang,” the presidential guest house in Davao City which has served as the Malacañang of the South.

A silent video the government released on social media showed him talking in a jovial mood. The video then cut to Samuel Martires, the justice who wrote the decision dismissing a graft case against Duterte in 2011 and was seated across the dining table from him, flashing a big smile, seemingly in reaction to what Duterte just said.

The visit surprised many court observers. Why were members of the judiciary – a co-equal of the executive branch of government whose members are expected to insulate themselves from improper influence – socializing with the newly elected president? 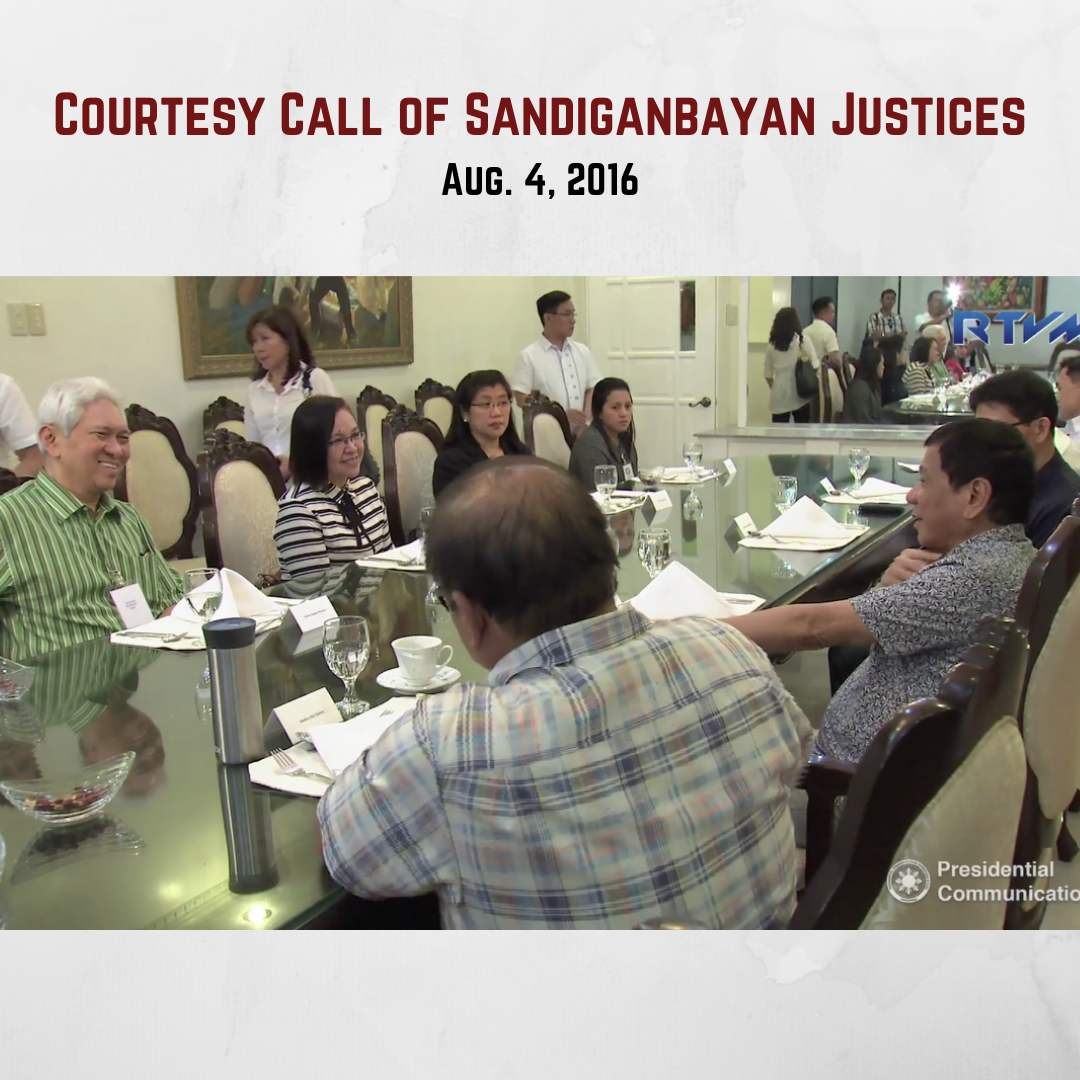 “Why would you approach the president? What is the message that you want to make especially if we look at the possibility that you will be aspiring for a higher position?” said lawyer Marlon Manuel, former convenor of the now disbanded Supreme Court Appointments Watch.

Indeed, Martires applied for a seat at the Supreme Court (SC) four months later. His visit to Duterte would be raised during his public interview before the Judicial and Bar Council (JBC), the constitutional body that vets nominees to the judiciary.

Martires admitted the optics were bad, but he dismissed any impropriety. He was only angry that the president’s media team made public what he said was a “private invitation from the president.”

“It will give a very bad impression to the public that we are going there because the president is going to ask us for something…. [He asked us for] nothing. Actually, the president told us that: ‘I respect the judiciary and I will never interfere in the affairs of the judiciary,’” Martires told the JBC.

“I was telling the justices that I [would] confront whoever [was] handling the media affairs of the president [and] tell him that this [was] a private affair,” he said.

Martires would be Duterte’s first appointee to the high court, but he would avail himself of early retirement after 18 months on the bench. He accepted a new appointment to lead the Office of the Ombudsman, a constitutional office that investigates and prosecutes allegations of graft and corruption against public officials. Under his watch, the Ombudsman restricted public access to the Statements of Assets, Liabilities and Net Worth (SALN) of Philippine presidents and other government officials. 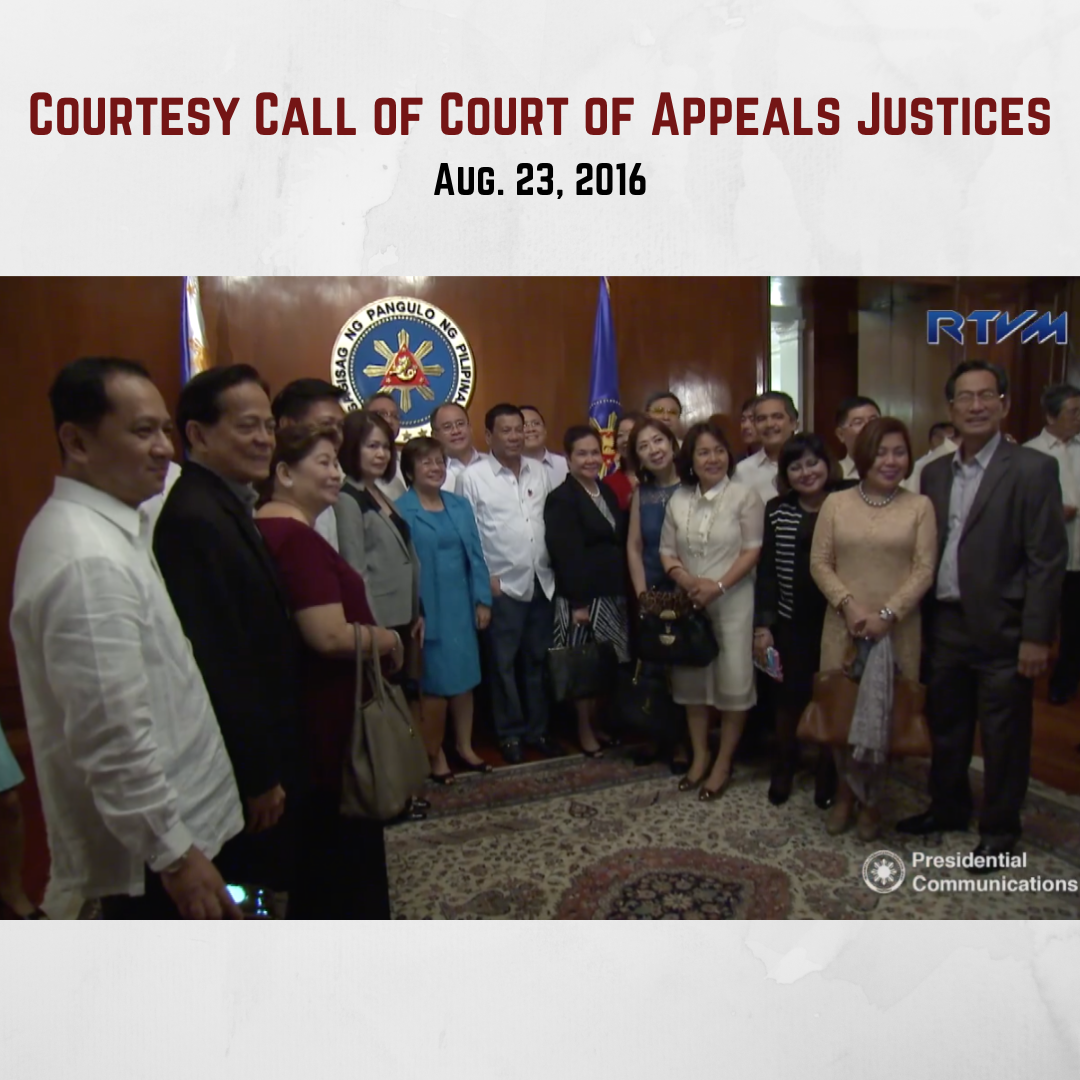 It wasn’t just the Sandiganbayan justices who gave the new president a courtesy call that month. Justices of the Court of Appeals (CA) also visited him in Malacañang on Aug. 23, 2016.

Then Chief Justice Maria Lourdes Sereno was informed in advance of the CA justices’ visit to Duterte. She disapproved of it. Justice Andres Reyes Jr., who made the arrangements with Malacañang, would later recall in an impeachment hearing against Sereno at the House of Representatives how the chief justice called him to her office and gave him a “tongue lashing.”

He claimed Sereno warned him it was a mistake that could end his career.

The CA justices proceeded with the visit, but the original agenda, which was to discuss with the President the judiciary's problems, was changed to simply presenting Duterte with the appeals court’s 80th anniversary commemorative coin and stamp.

A short video clip uploaded to the government’s online pages showed Justice Rosmari Carandang standing beside Duterte and introducing her colleagues who lined up to shake his hand and eagerly take photos with him.

Sereno later asked the Supreme Court en banc, or the full court, to issue a show-cause order against the justices, but it was disapproved.

Reyes would be appointed to the Supreme Court later along with at least three other justices present at the courtesy call — Carandang, Henri Inting, and Amy Lazaro Javier.

It was Sereno’s career that ended in May 2018 after threats from Duterte himself to remove her. Sereno was appointed by Duterte’s predecessor, Benigno Aquino III.

Sereno’s colleagues granted a controversial quo warranto petition filed by Solicitor General Jose Calida, while an impeachment complaint against her was being heard in the House of Representatives, introducing a new track to remove a sitting justice.

Voting 8-6, they declared her appointment void ab initio – from the beginning – over her failure to file all of her yearly Statements of Assets, Liabilities, and Net Worth (SALN) when she was a professor at the University of the Philippines.

All of Duterte’s appointees voted to oust her – Martires, Reyes, Alexander Gesmundo, and Noel Tijam, who penned the decision.

Sereno, the first woman to occupy the post of chief justice, was supposed to serve until 2030 or beyond Duterte’s term.

Next: Deference and loyalty to presidents