II. DEFERENCE AND LOYALTY TO PRESIDENTS

“The new, post-Marcos, Constitution was primarily supposed to have been designed in order to limit Presidential powers, but in transferring more power to other branches of government, the unintended consequence is that the President remains powerful, but in a less transparent way."

The 1987 Constitution was designed to prevent future dictatorships, making the judiciary, executive, and legislative co-equal branches that should check and balance each other.

In reality, the independence of the Supreme Court from the executive branch has been the subject of robust scrutiny from court observers, the academe, and the media.

A research paper that scrutinized the votes of chief justices over a span of three decades concluded that presidents have remained powerful over the Supreme Court because of their appointing powers.

Legal scholar Desiree Desierto studied the votes of 10 chief justices from 1970 to 2003 to test a hypothesis that associate justices of the high tribunal tended to vote in favor of the national government in consideration of being promoted to chief justice.

Looking into politically salient cases two years before and after the chief justices were appointed to the top post, she found an “apparent” principal-agent relationship only in appointments after the 1987 Constitution took effect. It made sense, she said, because justices had no opportunity to act as agents during the dictatorship.

Desierto concluded: “The new, post-Marcos, Constitution was primarily supposed to have been designed in order to limit Presidential powers, but in transferring more power to other branches of government (i.e. the Supreme Court), the unintended consequence is that the President remains powerful, but in a less transparent way.”

“A Member of the Judiciary must be a person of proven competence, integrity, probity, and independence.”

Court observers have long criticized the tendency of Supreme Court members, not just chief justices, to vote in favor of the interests of the executive branch.

The Supreme Court under Duterte is certainly no exception. In fact, the high court has favored Duterte in nearly all its decisions involving the national government as of this writing.

It’s as if the justices have decided to act as government lawyers, said Dan Gatmaytan, a constitutional law professor at the University of the Philippines College of Law.

Gatmaytan said this reflected the transactional culture of politics.

“A Philippine president would approach a potential candidate and [say], “I can make you justice, but I have to know what I’m gonna get out of it,” he said.

Marites Vitug, journalist and author of three books on the Supreme Court, said this tendency was particularly strong among new appointees. She attributed it to loyalty arising from “utang na loob” or debt of gratitude for the justices’ appointments, more than a  deferential attitude toward the executive branch.

Debt of gratitude is a plausible explanation for why all of Duterte’s appointees have sided with his interests while appointees of his predecessors were often divided.

It’s also a plausible explanation for the 2016 court decision dismissing a plunder case against former president Gloria Arroyo, where all of her appointees — except one whom she had a falling out with — voted in her favor. 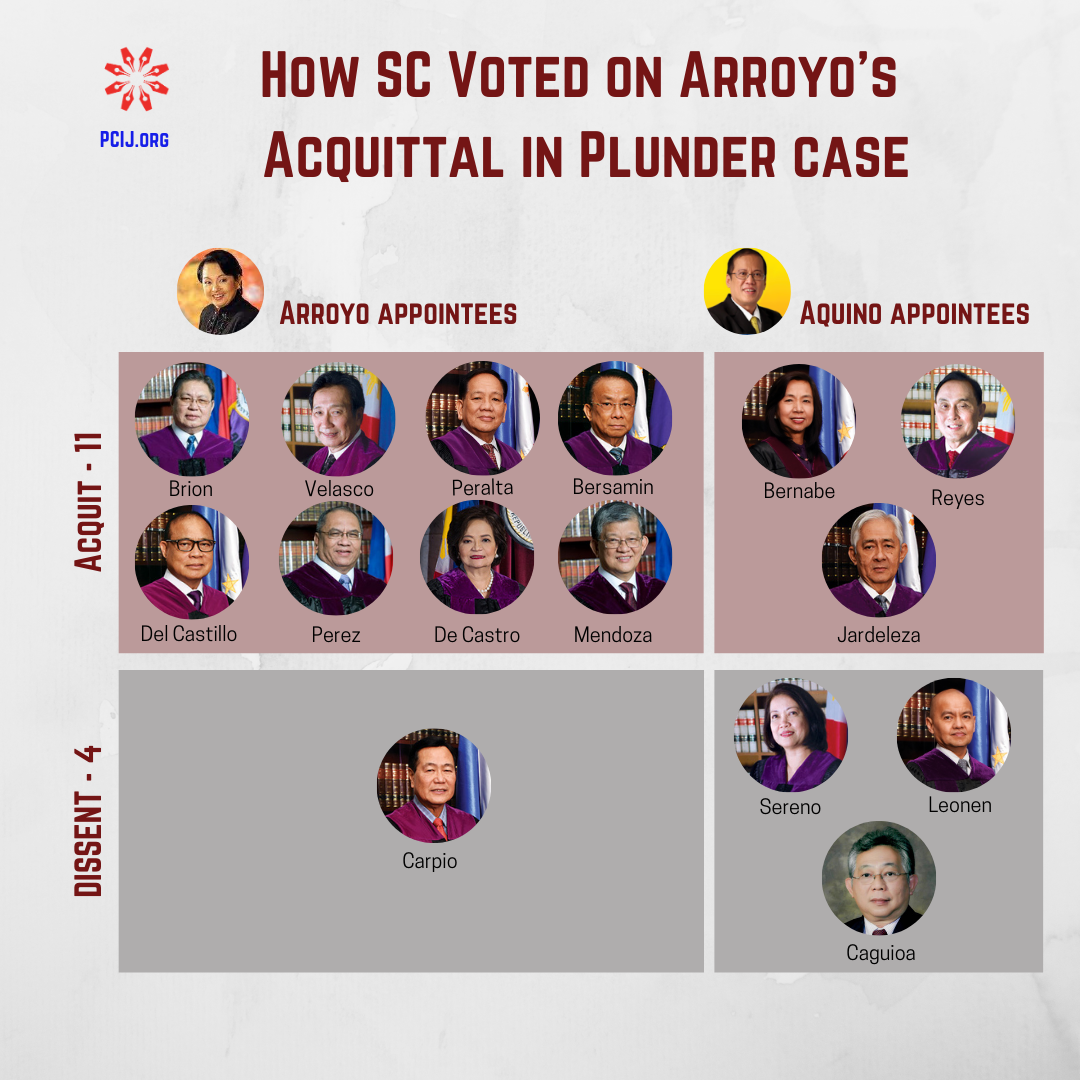 Whether or not these perceptions are true — that justices don’t actually decide based on the merits of the cases — will be hard to prove concretely. But it is the appearance that is important, said Manuel.

“When they decide in favor of an executive action, it’s very easy for the public – I’m not saying it is correct – to have that perception that it's because they are appointees of the president,” he said.

Justices resent these conclusions. "Justices would of course say it's unfair to analyze their votes based on who appointed them, because they really have no choice but to be a president's appointee. But it's an important bit of context, especially if there's a relation to the vote and the appointing power," said Lian Buan, a reporter covering the judiciary for online news site Rappler.

Certainly, deference, loyalty, and even aspirations to become chief justice do not entirely explain all the voting patterns.

Other factors, such as personal relationships, came into play, according to court observers. Jardeleza, for example, didn’t have a good relationship with Sereno after the chief magistrate tried to block his appointment to the high court. 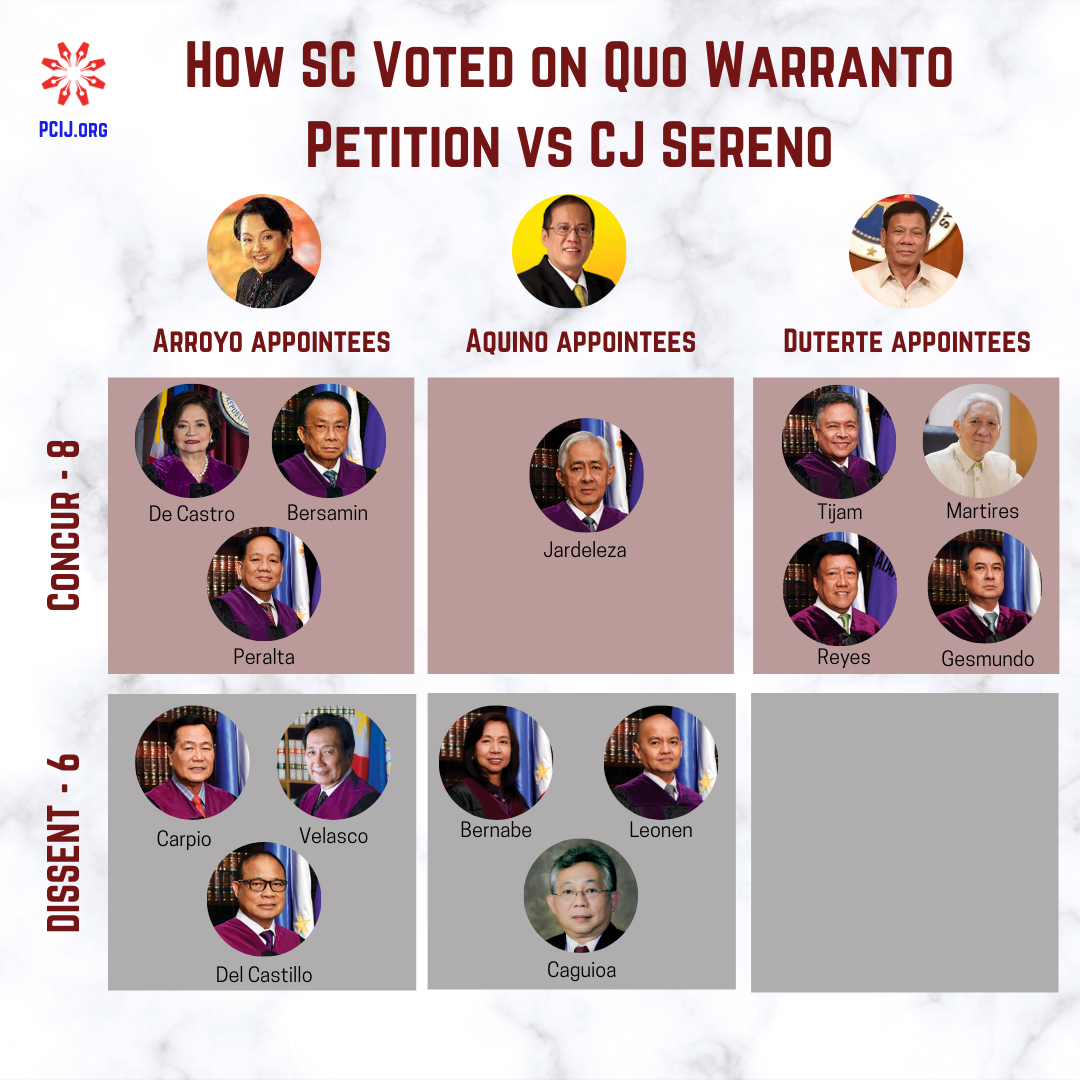 These perceptions have loomed over the integrity of incumbent Chief Justice Alexander  Gesmundo. He was appointed Supreme Court associate justice by Duterte in 2017 and chief justice in April 2021.

A former law professor and justice of the Sandiganbayan, he is widely respected among lawyers. He is a known workaholic said to be dedicated to instituting reforms in the judiciary.

In his public interview for the chief justice position, he spoke at length about his plans to address the judiciary’s backlog of cases and how the newly established Judicial Integrity Board could investigate allegations of corruption.

His voting record shows he has consistently voted in favor of the government.

“Let’s say he is a reformist. But as chief justice, you have to be measured by your decisions,” said Vitug.

The issue of court independence was raised during Gesmundo’s public interview in March 2021 when he applied for chief justice. He was asked: “How will you address the public’s perception that members of the high court are just followers of the present administration as had been the impression under the previous administrations?”

Gesmundo dismissed it and offered no concrete plan of action. “That is a public perception, your honor, but you can [address] that perception by showing that the courts decide [based] on what is proper under the circumstances. People may have different perceptions but what mattered is that the court is doing its job properly. I think that is the more important thing to consider, he said.

Former chief justice Artemio Panganiban, in a newspaper column, suggested that Gesmundo’s voting record might be a reflection of his inclination as a former assistant solicitor general, a position that required him to defend the government in many cases.

“As an ‘OSG thoroughbred,’ he developed a tendency to uphold government positions in controversial decisions based on the prima facie dictum that official duty had been regularly performed,” he wrote.