“The public perception that they are beyond reproach has eroded through the years. It's now so easy to file an impeachment complaint."

Read: V. The other battle: Backlog

In August 2020, the high tribunal stepped up amid growing frustrations with the Supreme Court among critics of the government. It dealt a blow to the president’s drug war.

Voting 11-3, the high court invalidated warrantless police searches and seizures of illegal drugs in vehicles based solely on an unverified anonymous tip.

“A battle waged against illegal drugs that tramples on the rights of the people is not a war on drugs; it is a war against the people,” the court said.

It's a bright light amid the worsening human rights situation in the country, said Buan, but it doesn't necessarily signal a stronger stance on human rights. "Why don't they resolve the petitions against  Duterte's drug war?"

Before this decision, the court ordered the release of drug war documents in 2019. It spurred cautious  hopes that the high court would finally exercise its powers to help stop the spate of killings that have gripped the country. However, the documents were later described as "rubbish" by the law group Center for International Law. 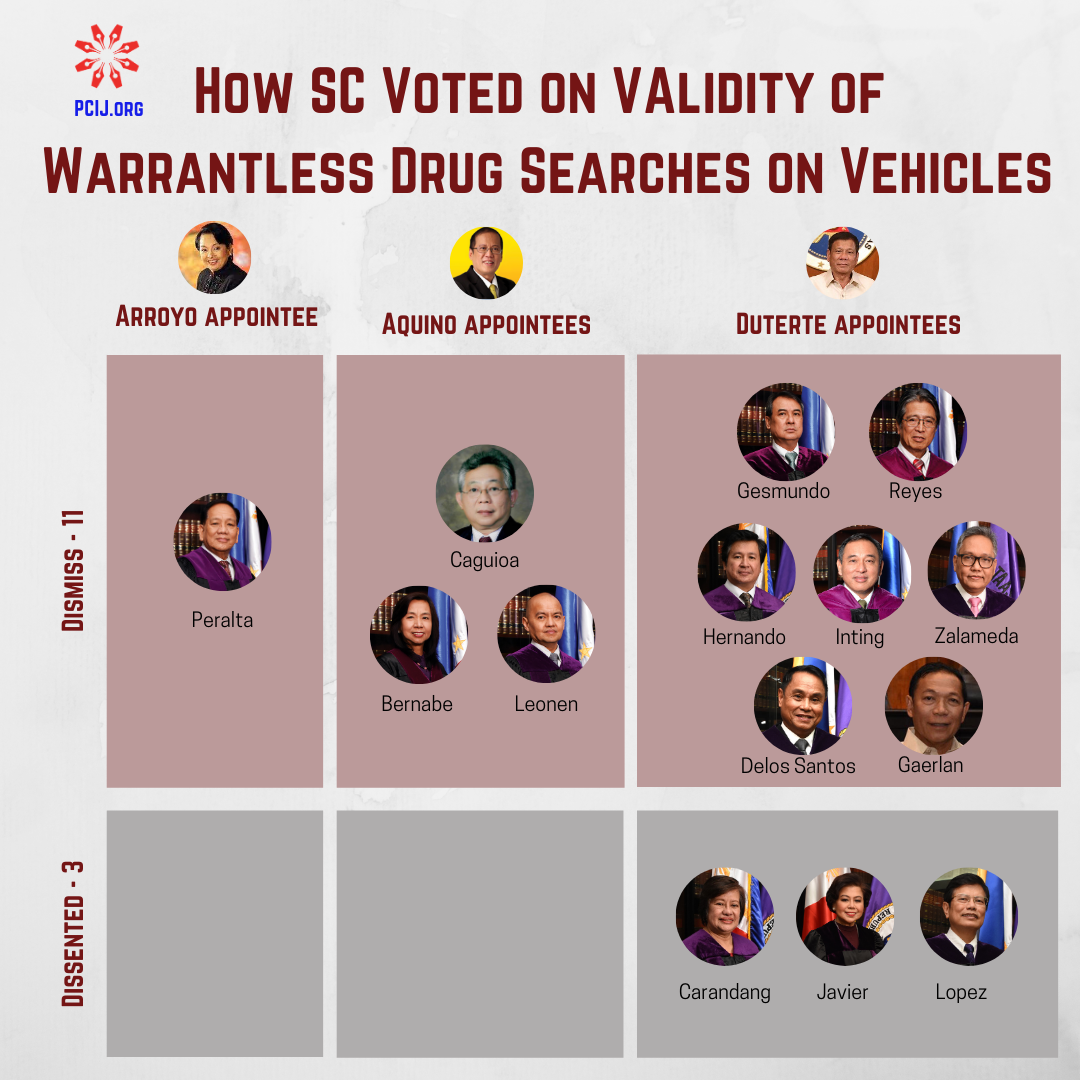 As the court began showing its resolve to look into potential constitutional violations committed in the drug war, the killings have spread to target other groups. Among them were members of the legal profession, over which the high court has supervisory powers.

In March 2021, the Supreme Court issued a statement condemning the killings and threats against judges and lawyers. It was “no less than an assault on the judiciary,” the court said.

The statement came after the Free Legal Assistance Group (FLAG) revealed that an unprecedented number of over 60 lawyers had been killed under Duterte’s administration. It’s more than the combined number of 49 lawyers reported killed from the Marcos regime to Aquino’s.

When a controversy shone a spotlight on the unintended role of the judiciary in killings, the JBC and the justices also weighed in.

Judges who issued search warrants for the operations now dubbed “Bloody Sunday” came under fire following the deaths of nine activists in separate raids conducted by police and military personnel on March 7. An examination revealed that a total of 24 search warrants were issued against activists on the same day, raising an uproar against courts becoming “search warrant factories.”

Gesmundo was asked about it during his public interview for the chief justice position. He reminded judges that they could not totally rely on the affidavits submitted by complainants and their witnesses in deciding whether or not to issue arrest and search warrants. Judges must first conduct a personal searching inquiry to determine probable cause.

It is not clear if the high court will do more, but Manuel said it’s within the tribunal’s authority to craft rules for judges to follow when issuing warrants. "We'll wait how fast they would come out with the resolution to require body cameras," said Buan.

The Supreme Court can even go further. Manuel said it can require judges to investigate the incidents and find out why there were so many warrants issued that day. He suspected that the affidavits submitted for the searches were similarly worded.

There’s one year left in Duterte’s presidency, but the pressure on the high court is piling up.

It is hearing the Anti-Terrorism Act of 2020, a law that expands the powers of the executive to address terrorism, but is the subject of 37 petitions over violations of fundamental freedoms and separation of powers. Petitioners said it also encroached on the judiciary by giving the executive the power to designate terrorists without the need for a court order.

It’s an important case that will define the high court, not only by how it will rule but whether it will act swiftly or delay its decision.

As these events transpired, the impeachment complaint against Leonen moved forward in March. Then Associate Justice Edgardo delos Santos, appointed to the court only in 2019, announced he was retiring early due to health reasons. It was revealed later that he was also facing a quo warranto case although the details were unknown to the public.

How did it become so easy to threaten a sitting justice with removal?

It’s the erosion of public perception that the Supreme Court is beyond reproach, said Manuel. “If you look at it, the powers did not change. There are no changes in the configuration of the three departments,” said Manuel.

“If I were a legislator and I looked highly on the members of the Supreme Court, I will not endorse a complaint. I will not vote, like what happened to the impeachment complaint versus Chief Justice Hilario Davide in 2003. It fizzled out,” he said.

Panganiban also urged the court to take the opportunity “to reverse or modify” its quo warranto ruling that removed Sereno, lest every justice would assume office without the certainty that they could complete their terms.

When Duterte leaves office, he bequeaths to his successor a diminished court.

He finally appointed Gesmundo after three short-term chief justices. He is expected to serve until 2026 or over five years, offering hopes that his long term will stabilize the court and allow him to institute reforms.