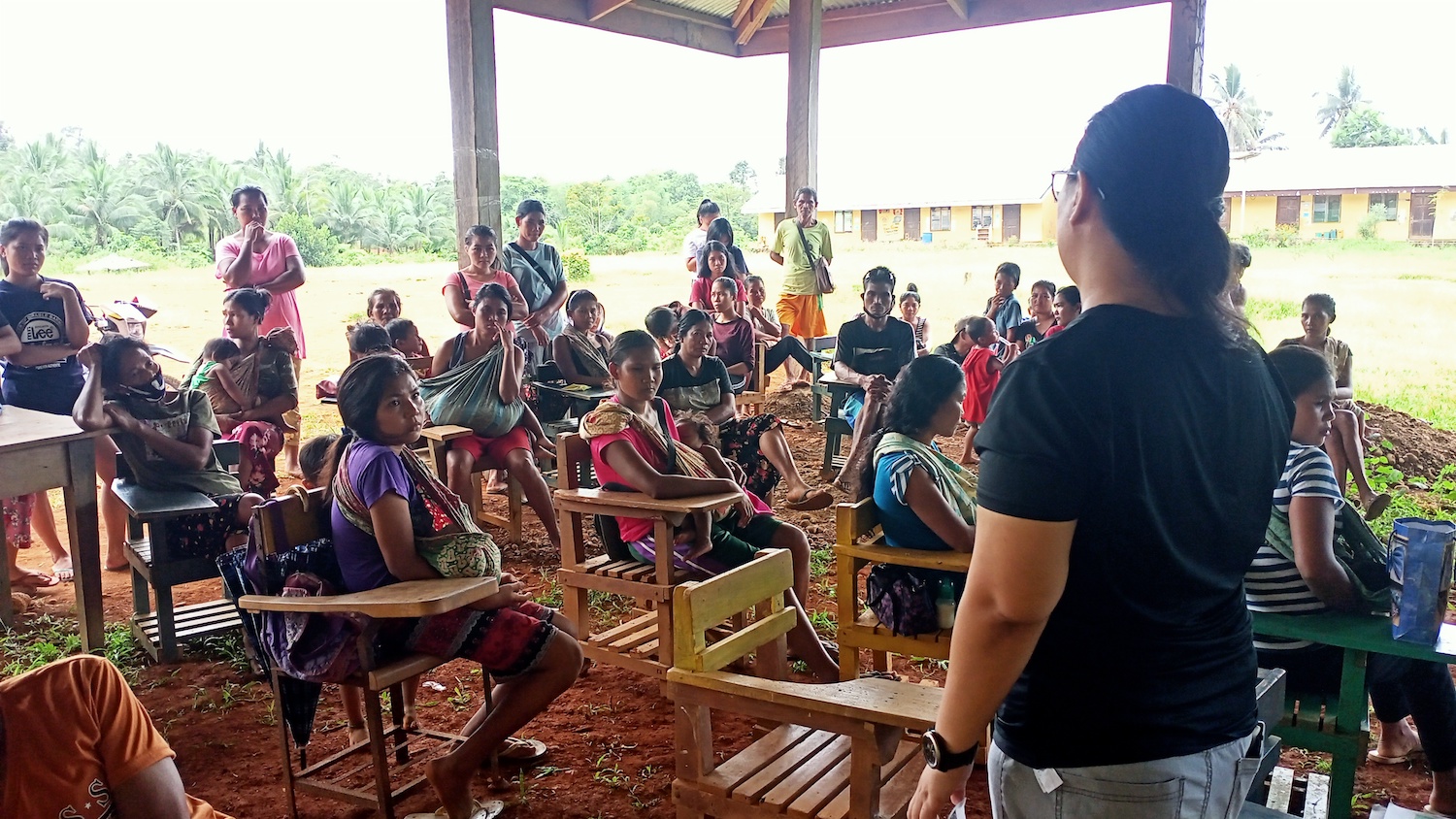 May Butoy and Helen Graido of the Legal Network for Truthful Elections (Lente) are in Palawan for the first elections to be held during the pandemic, taking crucial lessons for the 2022 Philippine general election. Covid-19 worries are expected to affect voter turnout, but lack of understanding among residents regarding the consequences of the plebiscite is a bigger concern.

After a postponement of nearly a year, Palaweños will finally decide on Saturday, March 13, whether or not the island will be split into three provinces.

Republic Act 11259 created the provinces of  Palawan del Norte, Palawan del Sur and Palawan Oriental, but the 2019 law will only be implemented if it wins the plebiscite vote. Residents will vote “Yes” if they want the three provinces created or “No” if they are against it.

The move to split the province has stirred contention among civic groups and conservationists. Lawyer Grizelda Mayo-Anda, convenor of the Save Palawan Movement, said proponents of the law to divide Palawan did not study the environmental and economic impacts and costs of the plan. The group also expressed concerns that residents were not consulted.

PCIJ’s Karol Ilagan spoke with May Butoy and Helen Graido of the Legal Network for Truthful Elections (Lente) – a network of volunteer lawyers, law students and paralegals trained and deployed to monitor elections in the Philippines – about the situation on the ground.

Butoy and Graido are in Palawan to observe the entire electoral cycle, monitoring events before, during and after plebiscite day. “This is the first electoral exercise we are holding in the context of a pandemic,” Butoy said in a March 11 interview.

They have been taking crucial lessons for the 2022 Philippine general election, especially on the protocols placed against Covid-19. They spoke with various stakeholders, including officials from the Commission on Elections (Comelec), security, health and vulnerable sectors.

Covid-19 worries are expected to affect voter turnout, they said, but lack of understanding among residents regarding the consequences of the plebiscite is a bigger concern.

“The general sense is people know that there is going to be a plebiscite and that they are to vote “Yes” or “No” to the division of the province. But as to why as well as the consequences and benefits of the division, we don't think they understand,” said Butoy.

Here are excerpts from PCIJ’s interview with Lente:

How will Covid-19 concerns be addressed at the polling places?

Beyond the standard protocol of wearing face masks and social distancing, Comelec introduced innovative procedures to ensure that people won’t be afraid to go out and vote. For example, Comelec has set up isolation polling places (IPPs) for voters who may exhibit symptoms.

Before entering a voting center or a school compound, a voter’s temperature will be checked. If the voter’s temperature is beyond the 37.5 degrees Celsius, they will be given five minutes to rest before another temperature check is done. If the temperature is within normal range, the voter may proceed to go inside the compound. If the temperature remains beyond the threshold, the voter will be referred to an isolated polling place where there is a separate set of plebiscite committee or electoral board. These officials, wearing personal protective equipment, will administer the voting for those who exhibit symptoms. Only five voters will be allowed inside the IPP at a time.

Comelec is very much aware that they need to do this to assure people that they would be safe. Kumbaga, ‘kaya namin silang ihiwalay sa inyo para pare-parehas pa rin kayong pwedeng makaboto.’

We laud the election officers because they really are the ones innovating on the ground, because they know their communities. 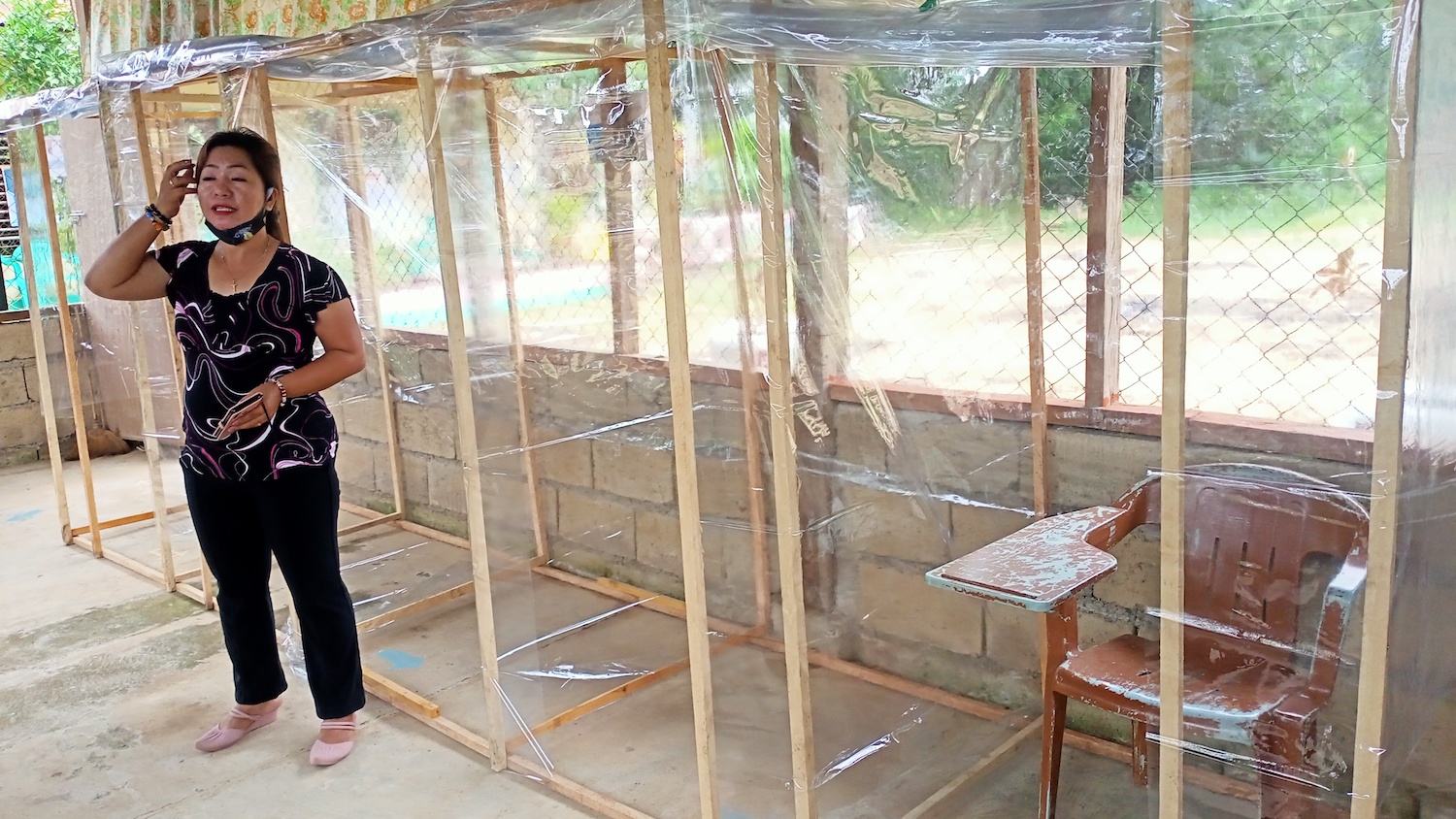 A day before the plebiscite, DepEd personnel set up an Isolation Polling Place for voters who will exhibit Covid-19 symptoms. Photograph courtesy of the Rafael R. Estiandian Elementary School in Brooke's Point, Palawan

What challenges did Comelec encounter in preparing for the plebiscite?

Understaffing emerged as a prominent issue. Some teachers were concerned about the risk of going out because of the pandemic. Some bureaucratic issues emerged as well as to who would be appointed. Because of the Election Service Reform Act (ESRA), teachers are entitled to say that they don't feel safe so they are allowed to refuse to serve.

Our interviews also revealed that understaffing led to the appointment of individuals related to the local government unit. This is not allowed in law – that’s illegal. There is partisanship here as these persons are related to the LGUs. We urgently called the attention of the Comelec on this because that is clearly illegal. These individuals should not be serving on plebiscite day.

As part of social distancing measures, only 200 voters may be accommodated per polling place so this meant an increase in the number of polling places. This means more members of the plebiscite committee need to be recruited.

We wanted to note the increase in polling places because this is going to be one of the challenges we will encounter by 2022. This is one of the quickest adjustments that can be made to help in crowd management. Kung dito pa lang sa Palawan, may understaffing na, paano pa buong Pilipinas?

But what is commendable is that the recruitment became more open. Private individuals and private school teachers answered the call to fill in those positions.

How would you assess Comelec’s information and education campaign?

We released a statement calling on Comelec to hold pulong-pulong (meeting). The requirement per municipality is to hold only one meeting, which can be problematic if there are a lot of barangays.

Comelec did not set clear targets as to how many should have been reached by their information dissemination activities.

We also learned that there was a pulong-pulong wherein the barangay chairman is able to choose who gets to attend. If the chairman doesn’t know you, you might not be able to join.

Comelec also used social media but it was limited because not everyone has online access. Radio meanwhile has reach but some areas especially those outside of the city would always experience brownouts.

The decision to no longer require the use of face shield on voting day could help with improving the level of voter turnout. But this should have been settled early on. Given the people’s limited access to information, news about any sort of change might not reach them soon.

At the onset it’s important that clear, accurate and timely information reach the people. You might have innovations but people will not be able appreciate them if they are not aware. Innovation and communication really go hand in hand.

Are residents fully aware of what's about to happen on March 13 and what's at stake?

This is a bit alarming. Similar to what we've stated in Lente’s statement, there are people who feel that they do not need to vote because the law dividing the province is already there. It's already passed. It was not explained to the people what would happen with the plebiscite results so that can affect the voter turnout eventually.

The general sense is people know that there is going to be a plebiscite and that they are to vote “Yes” or “No” to the division of the province. But as to why as well as the consequences and benefits of the division, we don't think they understand.

Because the proponent is the local government unit, it’s expected that they will push for “Yes.” But they are not able to explain fully the rationale behind the proposal or its downsides. They only highlight that the division will create new offices hence new jobs. Local government as employer.

In general the voters do not get the full picture. This is why we called on Comelec to provide a platform for debate because people only get one side of the story.

Are there security concerns reported?

There are no security concerns reported except for exchanges done in social media. Based on our interviews, they don't expect some sort of violence.

The risk of contracting Covid-19 is still high in the country. How do you think this would affect voter turnout?

The lack of understanding or appreciation on the impact of the plebiscite is likely to affect voter turnout – more than the concerns related to Covid-19. Our observation is they are disinterested either because they don’t understand what’s about to happen or they think it's a done deal anyway regardless of their participation.

Walk us through what will happen if the majority of voters approve of the plan to split Palawan.

Each new province will have its own legislative district so each will have a provincial governor, vice governor, and members of the Sangguniang Panlalawigan or the legislative body of the province. Current officials will serve until 2022 elections.

As to the budget, the three provinces will be entitled to “equitable shares in the proceeds of the utilization and development of the national wealth within their respective terrestrial and maritime jurisdiction.”

They will have a combined “share of not less than 40% of the gross collection derived by the national government from the preceding fiscal year from, for instance, mining taxes, royalties, forestry and fishery charges, and such other taxes, fees, or charges, including related surcharges, interests, or fines, and from its share in any co-production, joint venture or production sharing agreement in the utilization and development of the national wealth within their territorial jurisdiction.”

Municipalities can expect an increase in the budget as the utilization happens in their own territory – where there are mining operations for instance.