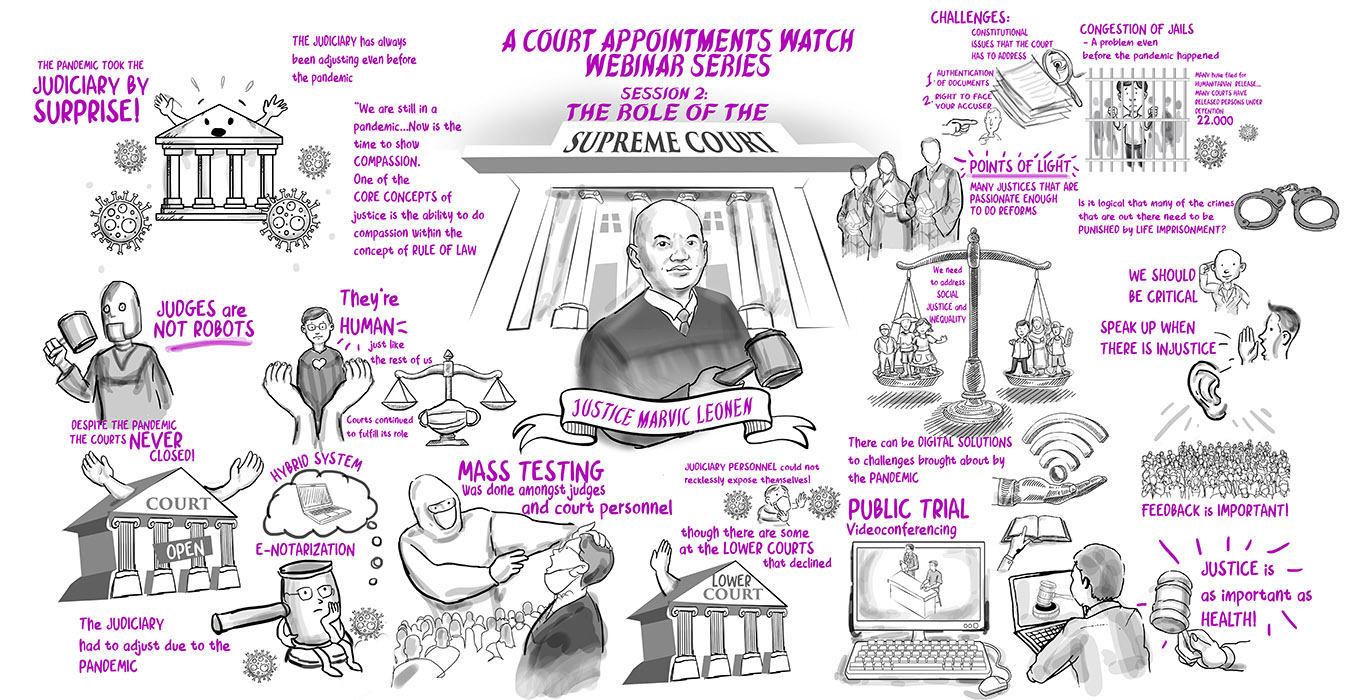 EYES ON THE COURT

“Even during emergency, rule of law prevails.”

Supreme Court Associate Justice Marvic Leonen made the statement as he discussed how the judiciary, like nearly everyone else, had to work remotely because of the Covid-19 pandemic.

Government lockdown measures that resulted in the closure of courts nationwide came as a shock to the Supreme Court, Leonen admitted on Wednesday, June 3, during the second session of the “Eyes on the Court” webinar series organized by Court Appointments Watch PH.

Justices convened en banc to try to make sure courts continued to function, while protecting the judiciary’s 25,000 employees, who are also “frontliners,” he said.

But many court employees, including judges in Metro Manila, declined the high tribunal’s offer to do mass testing, which was “very strange,” Leonen said.

So the justices, themselves forced to use the “Zoom” web conferencing app for the first time on April 17, had to take a hard look at how courts could use digital technology to dispense justice.

“The court has been trying to address a lot of the dysfunctions that we have seen in the past that we are slowly realizing,” Leonen said during the webinar.

The process began well before the pandemic, but the switch to digital technology is not easy and many logistical and legal issues needed to be ironed out, Leonen pointed out.

Constitutional questions pose a major challenge to efforts to make digital courtrooms a reality, he said.

“All of them produce substantial and technological questions that all of us need to collectively address,” Leonen said.

For instance, can videoconferencing ensure a speedy and public trial that must be guaranteed under the constitution? How about the right to confront a witness against the accused and the process of authenticating evidence, which is required by due process?

Still, the high court was able to make technological inroads. Amendments to the rules on civil procedure and the rules of evidence, to allow electronic filing and service of documents, took effect on May 1.

With the imposition of the enhanced community quarantine in mid-March, the high court issued a series of administrative circulars, the first being that courts should not shut down and keep a skeletal staff. It directed executive judges to assign courts to be on standby for priority cases.

Another circular called for the use of hotlines so judges and personnel need not be in court all the time, to avoid exposure to the virus. The high court also added pilot areas for hearings via videoconference, which began in Davao City in September 2019.

Promulgations of difficult cases have been done online, but the court is still making adjustments and identifying exceptions. Even the high court is going back to meeting physically, Leonen said.

“A lot of the disadvantages of the digital medium and the platforms that are not really fit for many of our court activities should be done away with,” the former University of the Philippines law dean said.

Last year, an assessment found out that the first “e-Court program” had a lot of fatal errors, such as the use of an outdated platform and lack of cybersecurity precautions.

The Supreme Court continued efforts to ensure that the poor and the marginalized would have access to the justice system despite the pandemic, he said.

The high court is looking to retool the EJOW, a mobile court that also offers services such as mediation and legal information, he said.

“One thing that we were unanimous with was that the courts will not shut down. The courts never shut down, we only adjusted drastically our operations,” Leonen said.

Since the lockdown, courts have released more than 22,000 detainees to decongest jails. Courts have also conducted over 7,000 videoconferencing activities, he said.

‘Teach context of the letters of the law’

As the judiciary figures out a way to harmonize the law and the need for digitalization, Leonen urged the public to be more understanding of the courts.

He challenged the public to be more critical but also engage more constructively with the judiciary.

Lawyers should fully understand the dynamics of society, while law schools must look beyond the need to hurdle the bar examinations and teach law students, who are more attuned to digital technology, the “context of the letters of the law,” he also said.

“There are structural problems, but every judicial system exists within a structure of a society. Social justice is not only for the courts to solve, we are only attending on it from a certain approach. We all have a role to play,” Leonen said.

PCIJ is a member of Court Appointments Watch PH. The CAW webinars and its coverage are made possible by the support of The Asia Foundation and Australian Government through the Department of Foreign Affairs and Trade.

Economic difficulties arising from the pandemic have seen Grade 11 and 12 students from private schools flocking to public schools struggling to implement the K to 12 Basic Education Program. Over a hundred private schools offering senior high school education have closed because of low enrollment.

At least 61 incidents of threats and attacks against the press were documented from Jan. 1, 2019 to April 30, 2020. Three journalists were killed.

Three years after the Ampatuan Massacre trial began, the high court in December 2013 assigned an "assisting judge" to speed up the process.