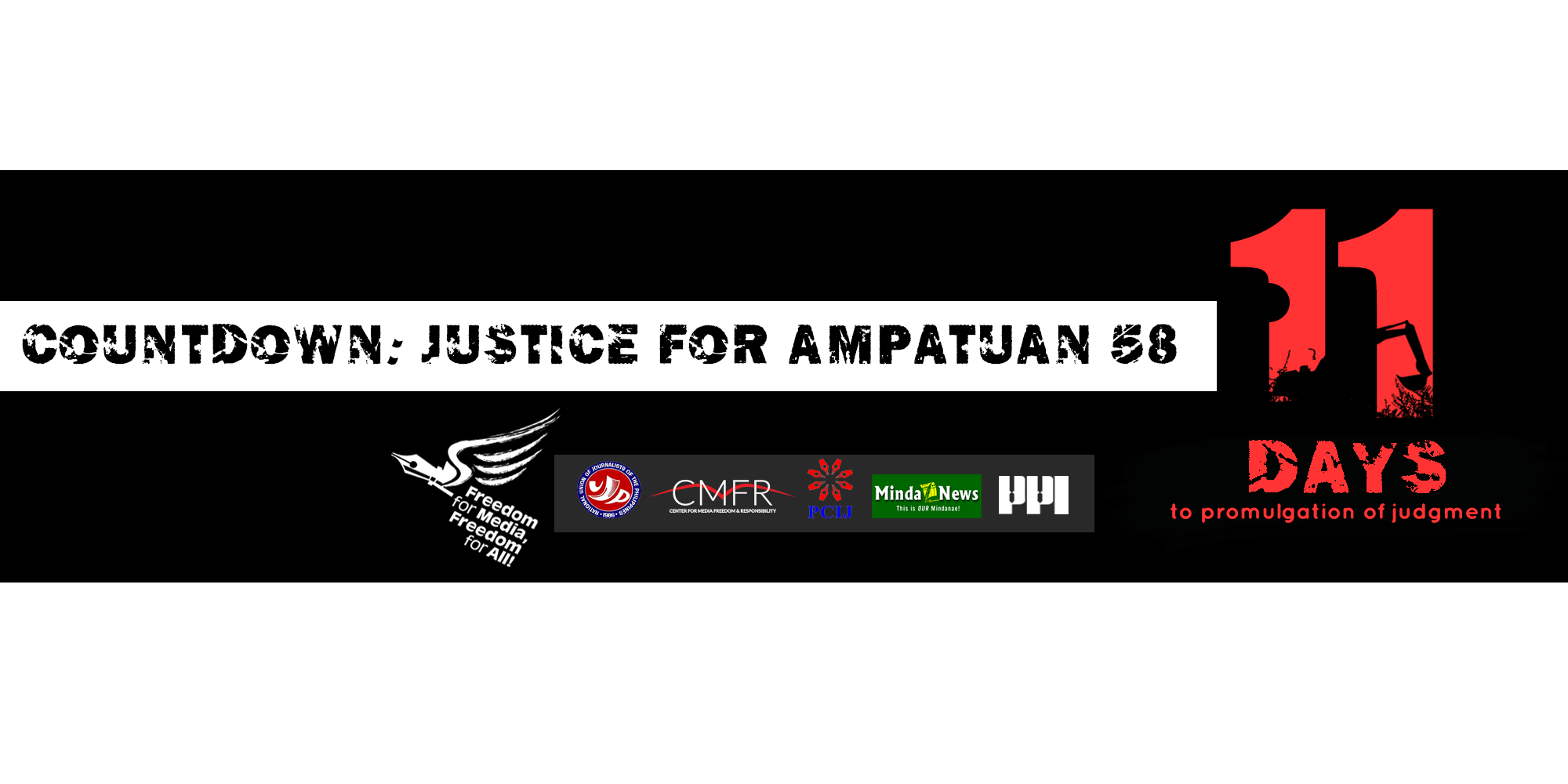 BY CAROLYN O. ARGUILLAS/ MINDANEWS AND FREEDOM FOR MEDIA, FREEDOM FOR ALL NETWORK December 08, 2019

IN THE nation’s third poorest province, Maguindanao, the poverty incidence is a staggering 62 percent – five of every six residents live on less than fifty pesos (or a US dollar) a day. And by all indications, every single sixth resident who is not poor could be an Ampatuan by blood or affinity.

But in the midst of all that poverty, Maguindanao and the Ampatuans have always been awash in cash, not so much because of any economic activity of note, except for agriculture and occasional kidnap-for-ransom episodes in the area.

The cash came nearly entirely from Manila, courtesy of President Gloria Macapagal-Arroyo, who has pampered the province and the clan as if they were her spoiled twins. In her nine years in power, President Arroyo has poured billions of pesos into the province in internal revenue allotment (IRA), public works budget, and other lump-sum funds.

After all, she has nurtured a deep friendship with the Ampatuans, who delivered landslide victory margins for her and her senatorial candidates in the 2004 and 2007 elections. In fact, minutes after casting his ballot in the 2007 polls, Datu Zaldy Ampatuan, then governor of the Autonomous Region in Muslim Mindanao (ARMM), had with clairvoyant aplomb guaranteed a 12-0 victory for Arroyo’s senatorial slate.

“Actually," he said, “Maguindanao province is an extension of the home province of Her Excellency, PGMA (President Gloria Macapagal-Arroyo), which is Pampanga. Here in Maguindanao, considering that we have 20 mayors unopposed, these 20 mayors are allies of the administration, even those areas with opponents – Pagalungan and Talitay – the opponents are all allies of the administration"

The Ampatuans were Arroyo’s anointed lieutenants in ARMM, their alliance built largely on largesse. To be fair, that was pretty much the same picture for two former ARMM governors: Zacaria Candao, who served during parts of the Aquino and Ramos administrations (1990 to 1993); and Nur Misuari, who served during the Ramos and Estrada regimes, but was more identified with the former.

The cash bonanza that Maguindanao and ARMM secured from Arroyo, however, has failed dismally to alleviate the misery of the poor. Instead, its poverty numbers have grown parallel with the surge in the Ampatuans’ fortunes, a clan given to flaunting its wealth, weapons, and wheels.

The irony is not lost on the likes of SocialWatch convenor and University of the Philippines professor Leonor Magtolis-Briones.

Briones cites government data showing that only three in every 10 residents in Maguindanao have finished Grade 6, and only five percent – or just 63,500 of the 1.27 million total populace – have access to potable water. There are only 18 public health doctors in the province, she says, or one for every 70,555 people.

The amount does not yet include the multimillion-peso earmarks or Philippine Development Assistance Fund (PDAF) for local congressmen that include Rep. Simeon Datumanong, an Ampatuan relative who served as Arroyo’s public works secretary, as well as a Cabinet member of her late father, former President Diosdado Macapagal.

With 470,021 registered voters as of March 2009, Maguindanao tops the five-province ARMM as the richest in votes. Arroyo, though, has been as generous with budget outlays for ARMM that Zaldy Ampatuan led as governor until he was suspended last December, when he was charged with rebellion.

Zaldy would later also be implicated, along with 11 of his relatives, in the Maguindanao massacre of 58 people. For 2010 alone, the total new appropriations for ARMM was P9.26 billion, including P8.18 billion for operations, P1 billion for locally-funded projects, P952.5 million for general administration and support, and P78 million for foreign-assisted projects. But it is Maguindanao in particular that has turned into a development black hole, and the steady growth in the wealth of the Ampatuans, a deep, dark mystery.

For sure the source of wealth for those like Mindanao’s richest governors Rodolfo del Rosario (Davao del Norte) and Jose Ma. Zubiri (Bukidnon) is far easier to explain. Del Rosario and Zubiri have vast plantations of banana and sugar, respectively, and both have shares of stocks in various businesses.

Rebecca Ampatuan-Ampatuan, eldest daughter of clan patriarch Andal Ampatuan Sr., has also said that her family has “vast landholdings," but only parcels of these have been declared in the Statements of Assets, Liabilities and Net Worth (SALNs) filed by various members of the clan who have held public office.

Moreover, the Ampatuans’ friends and critics alike point to what they say is a likelier source of the clan’s wealth, with several of them remarking when asked about this: “Tinatanong pa ba ’yan (Is that even asked)?"

Each individual province, city, town or barangay in turn receives a share according to an allocation formula based on population (50 percent weight), land area (25 percent), and an equal sharing component (25 percent).

Theoretically, of course, where these sums go and how they are used are supposed to be monitored and recorded down to the last centavo. But Bai Nariman Ambolodto, who was the acting governor of Maguindanao from December 15, 2009 to February 23, 2010, cannot – or would not – even say how much money was left in the provincial coffers when she took over last year.

Other sources say only a pittance was left. Ambolodto, who has continued to serve as Maguindanao’s acting vice governor after her temporary stint as the provincial chief executive, said queries about how much was left of the P84.4 million in IRA funds that Maguindanao gets monthly should be referred to the Commission on Audit.

The state auditing agency finished its special audit of the province by the third week of January, but has yet to release the report as of this writing.

Coincidentally, late last year, the London-based peace-building organization International Alert released a study that observed, among other things: “Fund transfers between the central government and the ARMM in the form of internal revenue allotments (IRAs) constitute the bulk of funds placed under the control of the clans… With government consumption expenditures in the ARMM growing at a faster rate than the rest of Mindanao combined, it was clear that whoever controlled the state would control these sums."

At the very least, since 2003, new towns and barangays had suddenly begun sprouting in Maguindanao, meaning more local government units there have been receiving IRAs. Interestingly as well, up until recently, members of the Ampatuan clan took control over most of these new local government units.

The ARMM governor then appoints officers in charge for the new municipality who will serve until the town’s regular officials are elected. In 2006, the RLA even created Shariff Kabunsuan province out of Maguindanao.

Two years later, however, the Supreme Court declared the move unconstitutional, noting that only Congress can create provinces. Maguindanao itself had only 21 municipalities prior to 2001, when Andal Sr. was first elected governor. By 2004, it had 25.

Since 2005, or after Zaldy Ampatuan became ARMM governor, the province has added 11 more towns. According to the National Statistics Office, the province had 36 towns and 506 barangays as of last year.

Pending elections, Governor Zaldy Ampatuan seemed to have had no compunctions about appointing relatives as officers in charge of the newly created towns in his family’s home province.

Yet while the most powerful and influential Ampatuans are now in detention in connection with the November 23, 2009 massacre in Ampatuan, Maguindanao, no one is discounting a strong showing by the clan at the upcoming polls.

As it is, 49 Ampatuans are running for various posts in Maguindanao, including 10 of the 12 in detention. Sitting out the May polls are former Datu Unsay mayor Andal Jr. and Zaldy, whose term of office is scheduled to lapse on Sept 30, 2011. But Andal Jr.’s first wife, Reshal Santiago, is making a bid for the mayoralty of Datu Unsay, while Zaldy’s wife, Bai Johaira or Bongbong, is gunning for a regular stint as mayor of Datu Hofer. Bongbong and Zaldy’s eldest daughter, 20-year-old Bai Noraillah Kristina, is a candidate for councilor of the same town. Mother and daughter are running unopposed.

Andal Sr., meanwhile, is vying for the post of Maguindanao vice governor. Among his three opponents is daughter Shaydee Ampatuan-Abutazil.

According to an Ampatuan relative who would rather not be named, the family’s fielding of at least two candidates among its members was done on purpose – to ensure that should something happen to the first clan candidate, another clan member would remain in the contest.

Rajah Buayan Mayor Yacob ‘Datu Jack’ Lumenda Ampatuan, who is seeking reelection against his brother Kuzbari, says the uncertainty that today hounds the clan’s political future dominated a meeting of the Ampatuan family and its allies that was held days before the deadline for the filing of certificates of candidacy.

Keeping a firm grasp on power even as their constituents are kept poor and poorly schooled -- that seems to be the quirky logic behind the Ampatuan clan, according to Eastern Mindanao Command chief, Lt. Gen. Raymundo Ferrer.

(Editor's Note: This story was the second of a three-part report that was first published by PCIJ on March 30, 2010)