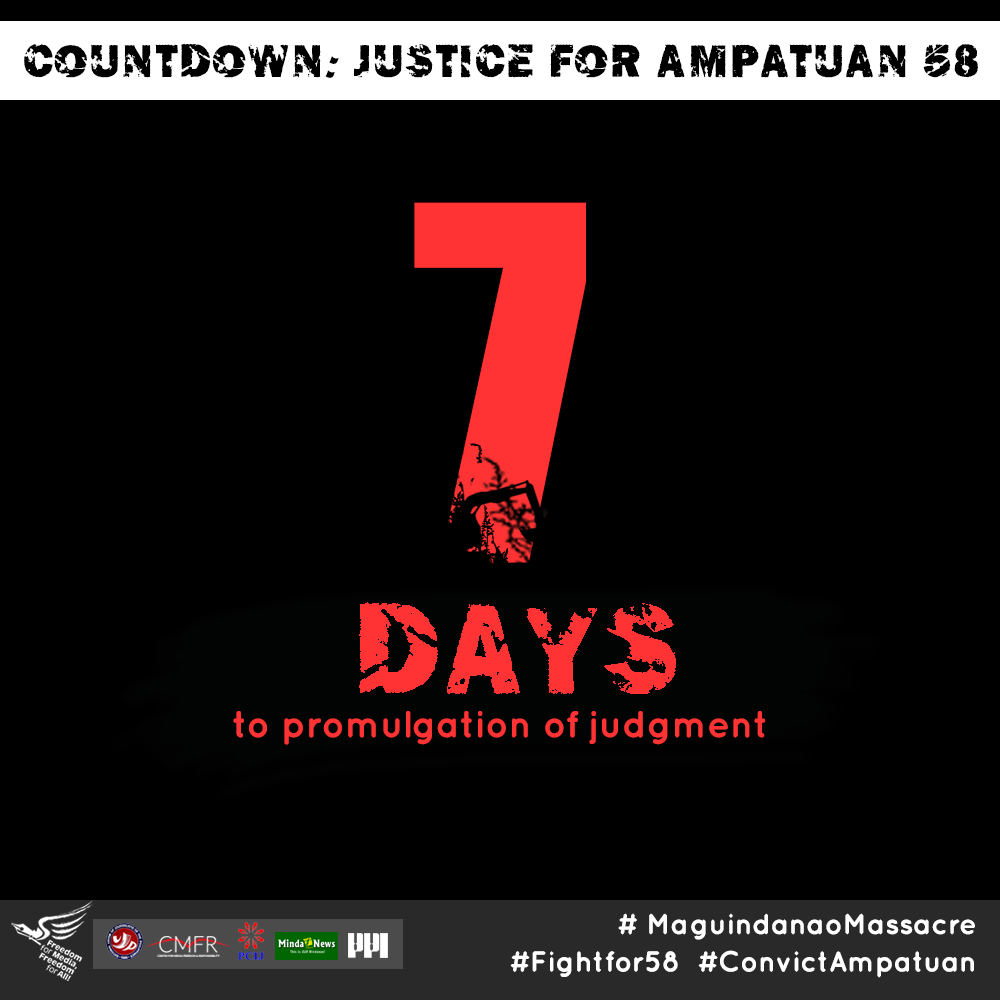 The prosecution presented eight key witnesses, including a former vice mayor and a former trusted man of the Ampatuans. Separately, they testified on how they saw the planning and execution of the ambush against the Mangudadatu party that led to the killing of 58 persons on Nov. 23, 2009.

IN ITS memorandum, the prosecution underscored the testimony of several witnesses:

SUKARNO BADAL, who said he saw the Ampatuans plan the killing and Datu Unsay take part in the massacre.

Badal was a trusted man of the Ampatuans. He said he was present in two meetings. In July 2009, he witnessed the Ampatuans as they discussed the plan to kill Mangudadatu. Another meeting in November 2009 discussed more details.

On Nov. 23, 2009, he testified that he saw the victims killed by the accused, among them Andal Ampatuan Jr.  Badal was among those initially charged in the information, but was dropped when he turned state witness.

ESMAEL CANAPIA, who said he saw Datu Unsay at the site of the massacre telling someone to hurry up in burying the bodies.

Canapia lived in Masalay village, the place of the massacre. On the day of the killing, he said he saw Datu Unsay with militia men, police officers, and some of the other accused in Masalay, telling someone to hurry up in burying the bodies. Canapia was among those initially charged in the information, and then turned state witness.

RASUL SANGKI, who said Datu Unsay told him of the plan to ambush the Mangudadatu convoy on its way to the Commission on Elections (Comelec), and that he was with Datu Unsay and the other accused when the victims were killed.

ESMAEL “Toto” MANGUNDADATU said his wife, Genalin, called him on the morning of Nov. 23, 2009, telling him that Datu Unsay and his men had blocked the convoy and that Unsay had slapped her.

Mangudadatu received the call from his wife, Genalin between 9 a.m. - 10 a.m. He lost contact with her after that.

A domestic helper of the Ampatuan clan, Saliao said he was present at a November 2009 meeting in which the Ampatuans agreed to kill anyone who would dare oppose the Ampatuans, and heard Andal Sr. tell Datu Unsay that the latter would have to be the one to block the Mangudadatu convoy in the highway. He added that Andal Sr. called for another meeting on Nov. 22, 2009, or just a day before the massacre, during which the plan to stop Mangudadatu from filing his certificate of candidacy and to kill him was again discussed.

Saliao said he was with Andal Sr. on Nov. 23, 2009, the day of the massacre, and heard him tell Datu Unsay to kill the Mangudadatus who were in the convoy.

NORODIN MAUYAG testified that he saw Datu Unsay maltreating the victims, and later heard gunshots coming from the direction that the Mangudadatu vehicles had taken.

AKMAD ABUBAKAR ESMAEL said he saw Datu Unsay and his men shoot the victims, and later, using a backhoe, bury their bodies.

On Nov. 23, 2009, Esmael was at his farm in Masalay harvesting corn when several vehicles arrived. He said he saw Datu Unsay alight from one of the vehicles, together with Police Chief Inspector Dicay and several armed men. He said he saw Datu Unsay and his men shoot the victims using high-powered firearms. He said he also saw the backhoe going up to massacre site, and later watched its use to bury the bodies of the dead along with the vehicles in the same pit.

NOH AKIL said he saw Datu Unsay in Sitio Masalay, the place of the massacre. He said Dicay, one of the accused, later told him there were people arriving to interview Akil, and Dicay wanted Akil to lie.

On Nov. 23, 2009, Akil said he saw Datu Unsay in Sitio Masalay and overhead him telling his men, who were armed, to stay put while he went to Sitio Malating with Dicay. On Nov. 24, 2009, he said Dicay told him that someone would arrive on Nov. 25 to interview him, and that he was to say that Dicay and a fellow police officer arrived at Sitio Masalay and Sitio Malating at about 11:30 a.m. on Nov. 23, 2009.

Medico-legal doctors from the National Bureau of Investigation (NBI) and the PNP also testified on the nature, number, and extent of gunshot wounds and other injuries sustained by the 58 victims.

Until they were charged with the murder of 58 persons on Nov. 23, 2009, the Ampatuans lived in mansions, traveled with a retinue of armed escorts in a convoy of black SUVs, flew business class, and in the first days of their detention, enjoyed catered meals.