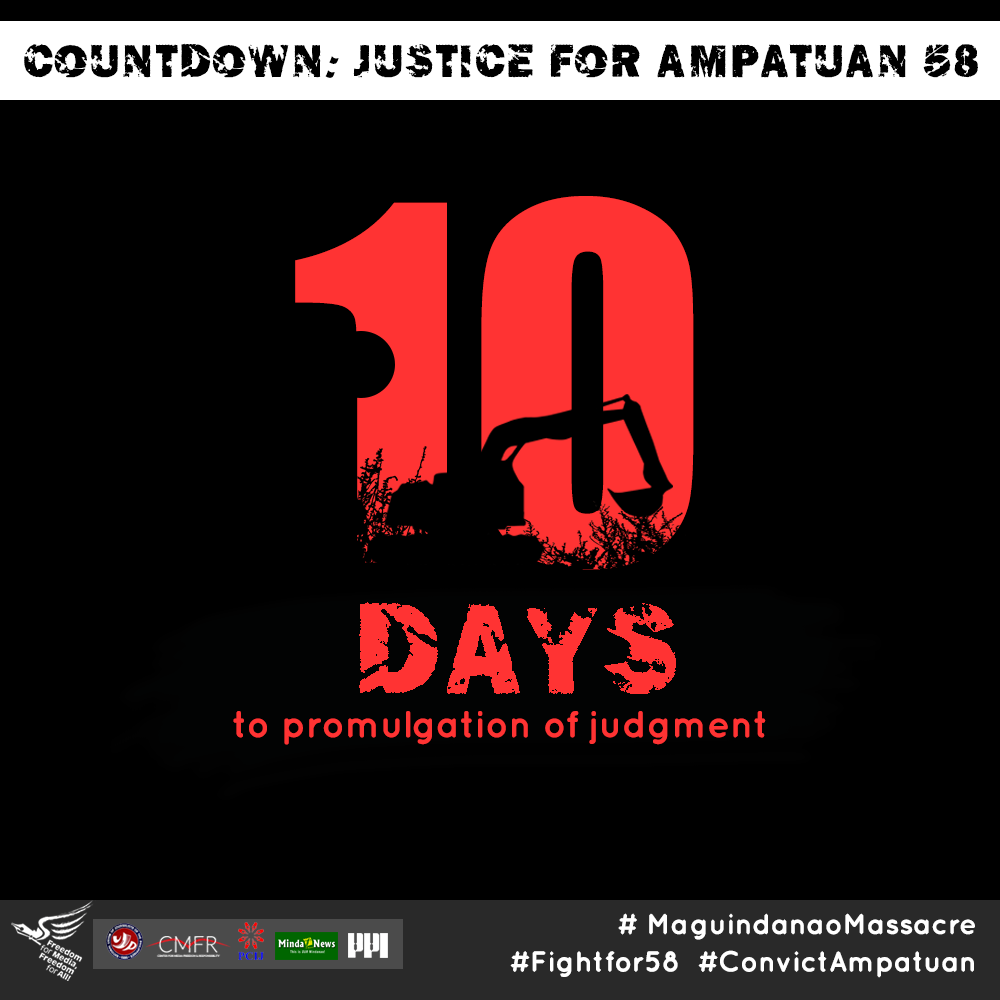 Numerous motions filed by lawyers of the accused Ampatuans had stretched the pace of the trial interminably. By 2013, they had filed nine motions for the judge to recuse herself. Bail hearings for 70 detained suspects and lead accused, Datu Unsay Ampatuan, ended only in 2017.

BY CENTER FOR MEDIA FREEDOM AND RESPONSIBILITY (CMFR) AND FREEDOM FOR MEDIA, FREEDOM FOR ALL NETWORK December 9, 2019 | 09:00:00 AM

SEVENTY detained suspects asked to be released on bail, which meant the court had to hear their petitions in lengthy proceedings.

The bail hearings for Datu Unsay alone took years, as witnesses were examined and cross-examined by both the prosecution and the defense. It was only on May 30, 2017, seven years after the trial began, that Judge Solis-Reyes denied Datu Unsay’s petition for bail.

The defense also filed numerous motions which added weeks and months to the process. Representing three of the accused Ampatuans, lawyer Philip Sigfrid Fortun asked Judge Solis-Reyes to recuse herself, filing six motions and an additional related motion. By 2013, the defense would file nine such motions, lengthening the time of of trial.

In 2014, the Fortun Narvaza & Salazar Law Office, which represented several members of the Ampatuan family, withdrew as counsel. The defense of Unsay was taken over by the Fortun & Santos Law Office where Sigfrid’s brother, Raymond, is a name partner. Other clients were taken over by other law firms.

The court gave each motion the time allowed by the Rules of Court.

In August 2019, as defense lawyers were due to submit a memorandum summing up their arguments, lawyer Paul Laguatan, then counsel of Datu Unsay, asked for the re-opening of the trial; which the court promptly denied.

Furthermore, eight contempt and two disbarment cases were also filed against the private prosecutor, lawyer Nena Santos. The numerous motions for reconsideration, the time given for the defendants to find new lawyers, as well as “delaying tactics of the defense”, tied up the case during the last three years.

With the Office of the Ombudsman’s latest memorandum circular, SALN access is now restricted across all branches of government.

Contrary to laws, public access to the SALNs has been problematic, with custodians issuing directives that either go beyond reasonable requirements or plainly restrict access.