What Imee disclosed and didn’t

This all changed in 2011, a year after she was elected governor of Ilocos Norte: Imee Marcos began disclosing more details, including a P17.2-million increase that almost tripled her net worth from P10.7 million in 2010 to P27.9 million as of 2011.

According to her 2011 SALN, Imee has six properties in Ilocos Norte worth P922,935.16, an inchoate share of her father’s estate under litigation, and P26.9 million in personal assets, bulk of which consists of jewelry, paintings, and artifacts. Her liabilities remained undetermined but were noted as still referring to “unpaid lawyer’s fee; claims and tax liabilities currently under litigation.”

As a member of Congress, Imee had not specified the total values of her real property and liability, and the details of her business interest in her asset declarations that PCIJ was able to secure from the House of Representatives. The statements she filed were inexact to begin with, reporting “indeterminate” amounts due to properties, claims and tax liabilities, and shares in various corporations that are all “under litigation.” Her net worth, which is supposed to cover both real and personal assets less liabilities, had only mirrored that amount she reported as personal. 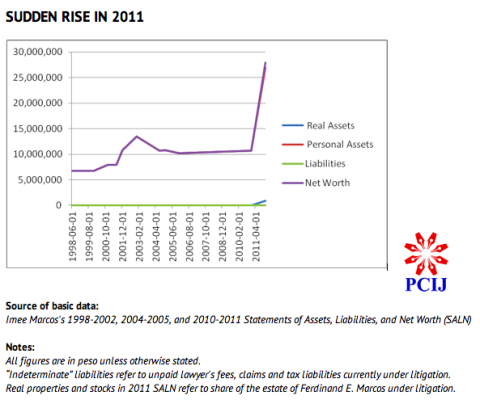 As in 2010, her personal assets in 2011 also include two vehicles worth P3.1 million and stocks worth P100,625, which is noted as well as an inchoate share of her father’s estate that is under litigation. 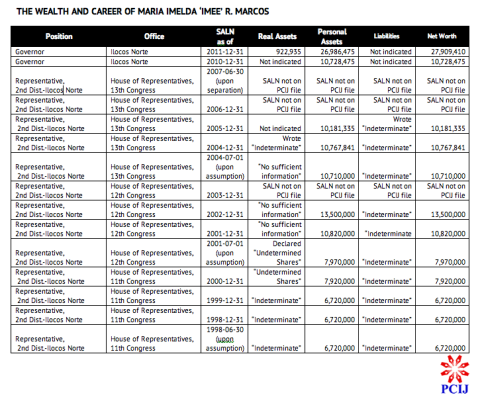 PCIJ sent queries by fax and email to Imee asking her to explain the rise in her net worth from 2010 to 2011. She has not responded to the letter as of this writing.

In 2011, Imee also started filling out the business interests and financial connections section of her SALN. Previously, these items had not been spelled out in her SALN because of shares in various corporations under litigation.

But in her 2011 SALN, Imee declared four entities where she sits as “Officer-President”: The Imelda R. Marcos Collection, Inc., IPROD, Inc., Creative Media and Film Society of the Philippines, Inc., and the Marcos Presidential Center, Inc. All four companies are located in San Juan City. The Marcos Presidential Center was acquired in 2002, while the rest were acquired in 2007. 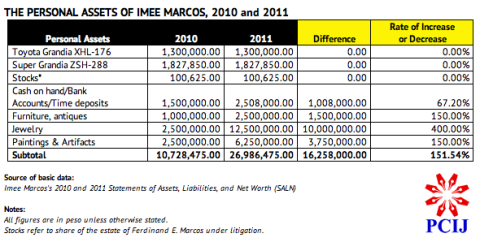 Records at the Securities and Exchange Commission (SEC) also reveal two more entities that appear to have once been connected to Imee Marcos: Friends of the National Museum Inc. and Sirib ni Ilocano Foundation Inc.

A 2000 Sirib document, however, says that Imee has already resigned from the foundation while Friends of the National Museum registration has been revoked.

— PCIJ, April 2013
Posted in: Sidebar, Stories
In This Series

SENATOR MANUEL ‘Manny’ B. Villar Jr. and Congressman Joseph Victor ‘JV’ G. Ejercito belong to rival political coalitions jostling against each other in the run-up to the May 2013 national and local elections. Villar’s wife Cynthia is running for senator with President Benigno Aquino III’s Team PNoy while Ejercito is part of the senatorial slate of the United Nationalist Alliance (UNA) led by Vice President Jejomar ‘Jojo’ Binay.

What Imee disclosed and didn’t

Ferdinand Marcos’s daughter tied
to offshore trust in the Caribbean

MARIA IMELDA Marcos Manotoc, the Princeton-educated eldest child of the late Philippine dictator Ferdinand Marcos and now a senior political figure in her own right, is beneficiary of a secret offshore trust. The hardworking and popular provincial governor — widely known as Imee Marcos — is one of the beneficiaries of the Sintra Trust, which financial records uncovered by the International Consortium of Investigative Journalists show to have been formed in June 2002 in the British Virgin Islands

The International Consortium of Investigative Journalists’ exploration of the secretive world of offshore companies and trusts began after a computer hard drive packed with corporate data and personal information and e-mails arrived in the mail. Gerard Ryle, ICIJ’s director, obtained the data trove as a result of his three-year investigation of Australia’s Firepower scandal, a case involving offshore havens and corporate fraud.

ON ANY given day, the corridors of the East Avenue Medical Center (EAMC) in Quezon City leading to the Medical Social Service are filled with patients and their relatives seeking financial assistance through their congressman’s Priority Development Assistance Fund (PDAF) or pork.

A CLOSE look at election spending reports of seven presidential candidates and three political parties in the May 10 polls reveals that election campaigns are funded in the manner and mold of financing for risky business start-ups.