The wealth of Gov. Toto 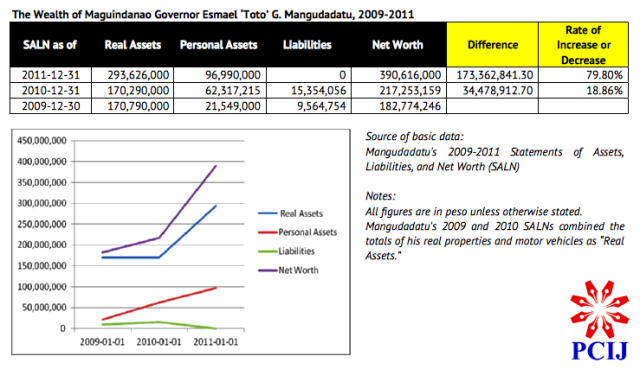 THE ONLY thing constant is change, supposedly, but apparently there are some things that remain the same. Yet another round of elections, for instance, will find Maguindanao still one of the poorest provinces in the Philippines. The province also still has a governor who is a millionaire many, many times over.

Maguindanao Governor Esmael ‘Toto’ Mangudadatu, in fact, has even increased his wealth since 2010, when he was first elected as the province’s chief executive. Moreover, PCIJ’s records of the asset declarations of 54 out of 81 governors show that among these provincial big bosses, Mangudadatu is second only to Rosa Vilma S. Recto of Batangas in terms of net worth. Mangudadatu’s net worth, however, makes him the richest governor in Mindanao.

Recto and husband Senator Ralph G. Recto have a joint net worth of P426 million. According to Mangudadatu’s 2011 Statement of Assets, Liabilities, and Net Worth (SALN), the Maguindanao governor has a net worth of P390.6 million.

Among the assets he listed in his SALN are over a thousand hectares of land, P40-million cash, dozens of vehicles, and herds of animals, along with several houses and lots, plantations, ranches, commercial establishments, and condominium units.

(The PCIJ requests copies of the annual SALNs filed by local officials from the Office of the Ombudsman in Luzon, Visayas, and Mindanao. Of the 80 provinces and one regional government [ARMM], only 54 SALNs were provided for the year 2011. This includes 17 asset declarations from Mindanao.)

Mangudadatu served three terms as Buluan mayor from 1998 to 2007. From 1995 to 1998, he was provincial board member of Maguindanao. The PCIJ has yet to secure Mangudadatu’s SALNs from these years.

In 2007, Mangudadatu was elected vice mayor of Buluan. By 2009, according to his SALN, his wealth stood at P182.8 million. In 2010, which was his first year as Maguindanao governor, Mangudadatu reported P217.3 million in net worth. This included a P34.4-million increase from what he reported in the previous year.

By 2011, Mangudadatu’s wealth registered an 80-percent increase or an additional P173.4 million, making his net worth shoot up to P390.6 million. This figure is the sum of P293.6 million in real assets and P96.9 million in personal assets. The governor reported no loans or any form of liability in his 2011 SALN.

To be sure, at least 15 of Mangudadatu’s motor vehicles depreciated in value in 2011 by over P4.5 million. But this is far outweighed by the appreciation in value of his previously acquired assets, as well as new acquisitions in 2011that add up to more than P150 million.

For instance, in his 2009 and 2010 SALNs, Mangudadatu declared a 270-hectare oil-palm plantation in Buluan, which he said was acquired in 2006 through staggered (listed as “stagard” in his 2011 SALN) payment. The “acquisition cost” of this property is P8.9 million. In his 2011 SALN, another “300 Has” was added to the entry, making the cost grow to P120 million. The property was acquired through “installment,” the document states.

Another example is the ranch with 150 Brahman cattle that Mangudadatu said he inherited in 1990 worth P5.28 million. The value of the property was raised to P16.1 million in his 2011 SALN.

In an emailed response to PCIJ’s queries, Mangudadatu said that “I honestly believe that I properly prepared and filed (my SALN) in accordance with pertinent laws and practice.” He then explained that his previously acquired assets grew in value in 2011 because “aside from the development and also the improvement introduced to the said assets the assessed values of mostly all real properties in the Province of Maguindanao dramatically increased more than two-folds.”

But Mangudadatu’s 2011 SALN provided only the acquisition cost or the actual amount paid to acquire the properties. No information was given regarding the assessed values or current fair market values, which should reflect the current valuation of a house or lot.

The governor added that before he became a public official, “it’s my passion to look for a parcel of lands so that I can develop it into an agricultural land.” He said that he used “my incomes from my different ventures” to be able to acquire more properties in 2011 through “installments and payments from those who owed me money and (had used) their property as collateral.”

Indeed, newly acquired real properties were enrolled in his 2011 SALN. Among these are a 1,520-hectare commercial lot in Malalag, Davao del Sur worth P1.1 million and an “Agriland Coconut (1,000 Trees)” worth P3 million.

Mangudadatu clarified that the Malalag, Davao del Sur property covers only 1,520 square meters and not 1,520 hectares. This commercial lot, he says, was acquired in February 2012 from a certain Marietta P. Lanzar.

In his 2011 SALN, Mangudadatu also enrolled a P15-million increase in his cash on hand and in bank. He listed as well a tractor case, two Holland tractors, a backhoe (his second unit), and a “Tahoe” as new acquisitions worth a total of P7.5 million.

The governor’s SALNs do not provide sufficient information about how he was able to acquire millions worth of more properties in 2011. Except for a “Laboratory 0 Building” in Buluan, which he said he acquired in 2007 at P1.5 million, no other property was disposed of or delisted in his 2011 SALN.

From 2009 to 2011, Mangudadatu also did not declare any entity in the business interests and financial connections section of his SALNs. But he did list an ice plant, a gasoline station, a beauty parlor, and a resort as part of his assets. He said he acquired all four through cash.

Records at the Securities and Exchange Commission (SEC), though, reveal another entity connected to Mangudadatu. According to the 2004 primary license of Eastern Kutawato College Inc., a non-stock corporation registered with the SEC on March 12, 2004, Mangudadatu is one of its incorporators with a capital contribution of P25,000. The governor’s signature in the document is similar to his signature in his SALNs.

In his reply to PCIJ’s queries, Mangudadatu neither confirmed nor denied his connection to Eastern Kutawato. He only said that “as per information, (Eastern Kutawato is) a non-profit and non-stock corporation and hence I do not have any business interest therein.”

The annual general information sheets of Eastern Kutawato, however, are not available, making it hard to ascertain whether or not Mangudadatu is still connected with the entity.

The ties that bind